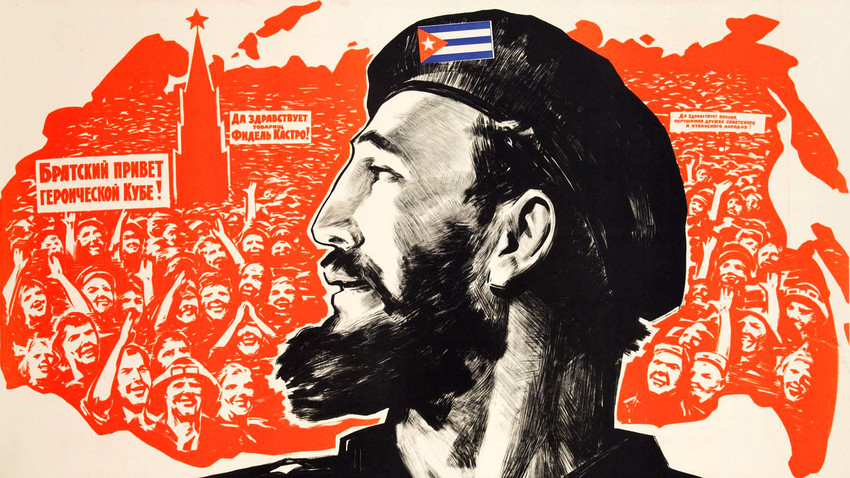 Pravda, 1963
The Soviet Union had client states on almost every continent — these were its key and most devoted comrades. 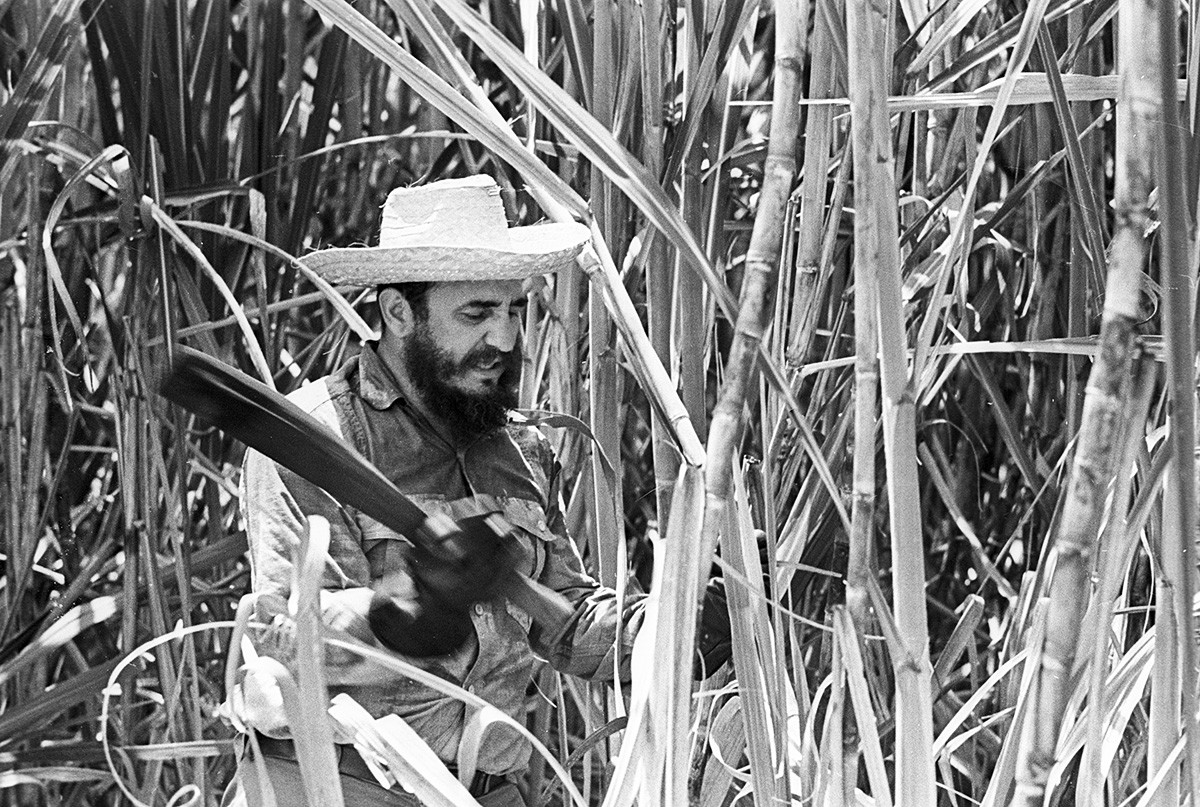 Cuba's leader Fidel Castro publicly supported the USSR. This photo was taken in 1969.

When the Soviet Union faced criticism after the Warsaw Pact invasion of Czechoslovakia in 1968, it was Cuba, in the face of its leader Fidel Castro, that publicly supported the USSR. Castro denounced the Prague Spring and called for “struggle in comradeship with pro-Yankee agents and spies”. Years after this significant demonstration of support, Cuba continued to be one of the Soviet Union’s closest Cold War allies.

Immediately after the Cuban revolution, Soviet intelligence and its leaders had little understanding about who Fidel Castro really was and what his objectives were: to a point where the possibility of Castro being on the CIA payroll was being considered.

However, soon enough, the start of the Cold War and American economic and military pressure pushed Cuba into a full embrace with the Soviet Union. The island nation became the only communist stronghold in the Western hemisphere, a position that could hardly be overestimated in the time of such great ideological rivalry.

Over the years following the Cuban Revolution, the USSR single-handedly kickstarted and sustained the Cuban economy, paying 10 times the world price for Cuban sugar cane, the major export commodity on the island. In return, the Soviet Union acquired a close ally only 250 km off the coast of Florida.

The Soviets built and operated a spy base in Cuba — known as the ‘Lourdes SIGINT’ facility — only 150 km from Key West and 300 km from Miami. The Soviets and the Cubans also capitalized on the failed American Bay of Pigs landing operation in Cuba in 1961 to deploy ballistic missiles in Cuba. The move triggered the Cuban missile crisis that was eventually resolved favorably for Moscow and Washington alike.

Egypt & Syria in the Middle East 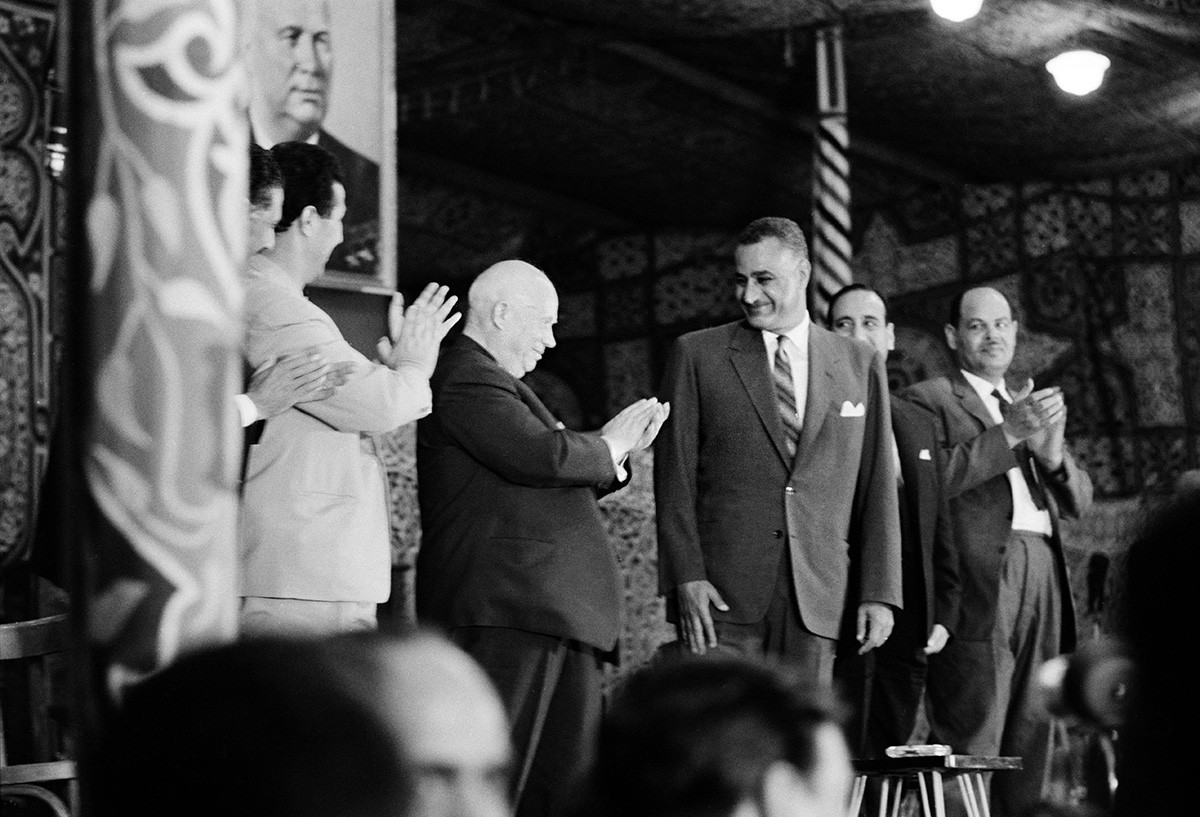 The Cold War between the U.S. and the USSR in the Middle East resembled a chess match: each party sought to neutralize the strategic advantage of the other in the vital, but highly explosive region. In the atmosphere of brewing Arab-Israeli tensions, the Soviet Union stepped forward to pick a side.

Since the very beginning of the Cold War in the late 1940s, the USSR supplied the Arab states, particularly Egypt and Syria, with Soviet arms and military advisers. The Soviets played a major role in forcing the UK and France to withdraw their troops from Egypt in 1956, when Egyptian president Gamal Abdel Nasser’s move to nationalize the Suez Canal had resulted in a military invasion by those states.

Although the USSR failed to cultivate communist ideology in the Middle East, it successfully used the supply of arms and other aid in exchange for Soviet political influence in the region. After the Soviet fleet gained access to a Syrian port in 1971, the U.S. was no longer the only player in the Mediterranean as the Soviet Navy’s 5th Operational Squadron counterbalanced the U.S.’s Sixth Fleet based in Italy.

Even after Egypt veered away from the Soviet Union after the death of Nasser, Syria remained a Soviet stronghold in the Middle East, up until the dissolution of the USSR in 1991. 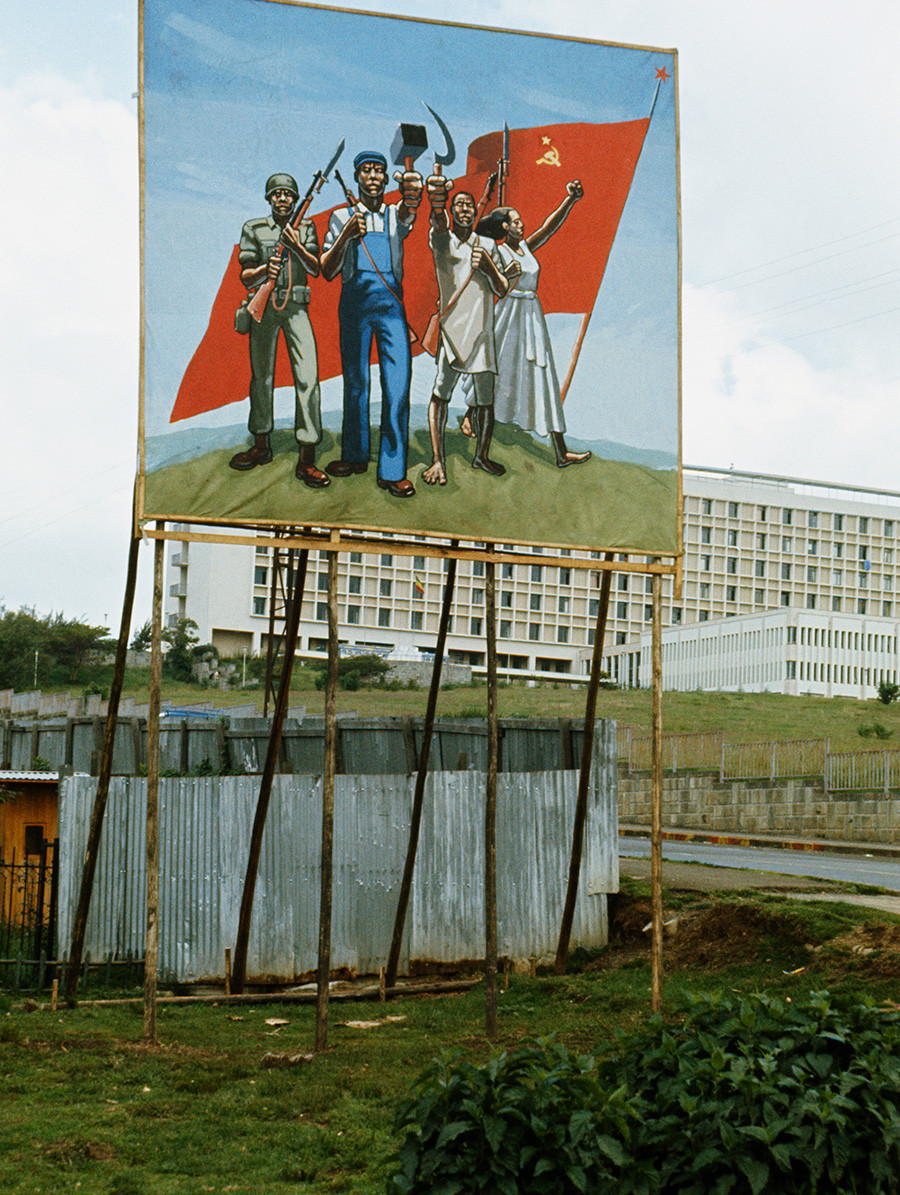 A propaganda poster shows a few Ethiopians holding Communist symbols in front of the Soviet flag, in Addis Ababa, the capitol of Ethiopia, 1977.

Some observers described the Soviet Union’s involvement with African states in terms of “maximum-minimum principles”: maximum gains for minimum risks. African countries, weakened in the process of decolonization, presented an opportunity for the Soviet Union to spread communist ideology and gain strategic footholds in a new important region where a power vacuum appeared after the European powers had withdrawn.

The USSR supported countless insurgency movements throughout the African continent during the Cold War, yet its most precious ally on the continent was Ethiopia.

This country located in the Horn of Africa interested Moscow even before the 1917 Revolution in Russia, as the country’s leaders saw it as a strategic venue to enter the wider African continent.

Yet, the peak of the Soviet-Ethiopian friendship was not reached before 1977, when Somalia, a Soviet client state at the time, broke relations with the USSR, expelling Soviet advisers, and launching an offensive against Ethiopia’s eastern frontier.

Immediately after the attack, Moscow quickly stepped up to deliver arms and other military equipment — including 80 aircraft, 600 tanks and 300 armored personnel carriers — to Ethiopia by air and sea, with effectiveness and efficiency that baffled Soviet Union’s Cold War rivals in the West.

Together with 17,000 Cuban soldiers deployed to the battlefield from Angola, the Soviet military aid quickly revered the course of the war and enabled Ethiopia to thwart the Somali offensive.

For the capitalist bloc, this incident became a vivid demonstration of the Soviet Union’s capabilities to shape events abroad and cemented the USSR’s status of a global hegemon.

Much later, best-selling British author Wilbur Smith based one of his novels on the Soviet involvement in Africa. 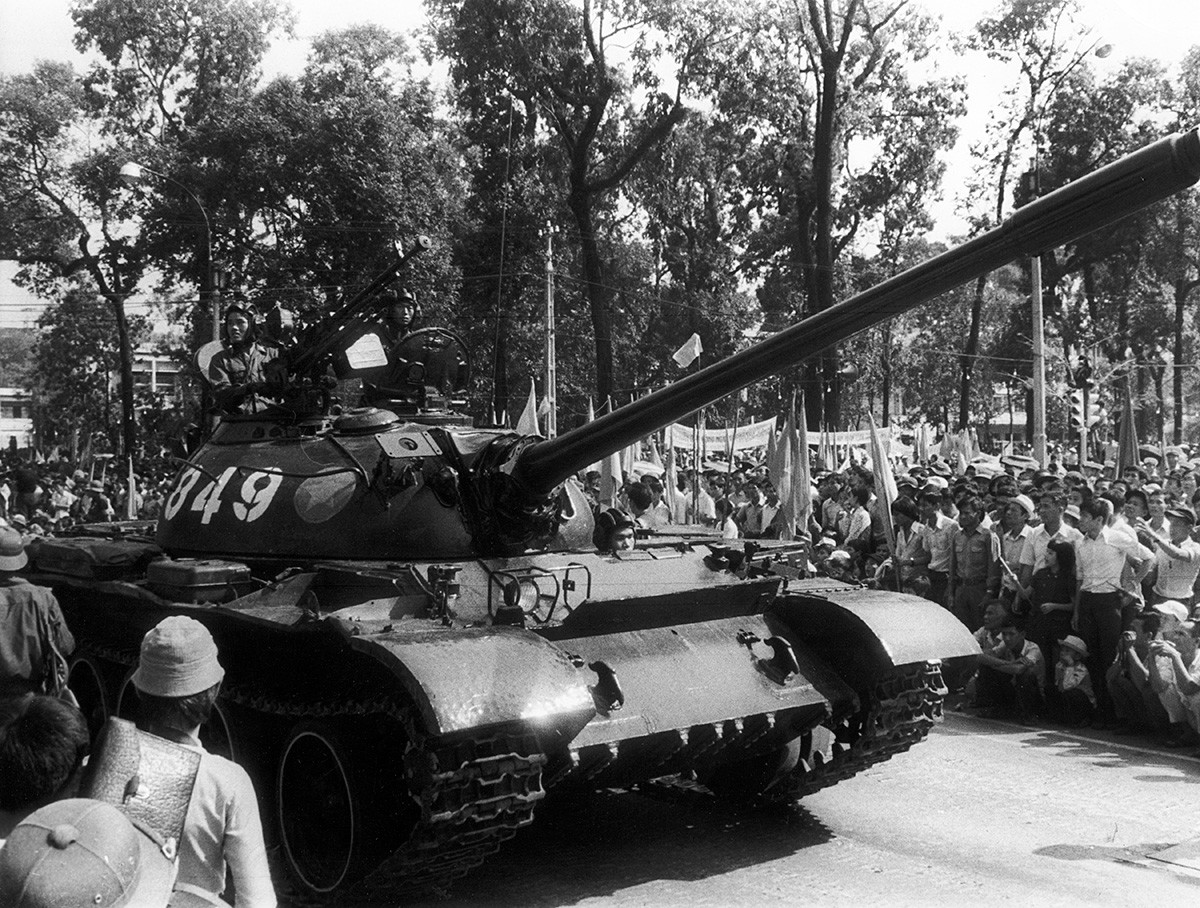 The War in Vietnam — that lasted from 1955 to 1975 — presented the Soviet Union an opportunity to undermine what it saw as American imperial encroachments in Indochina.

During the course of the conflict, the Soviets supplied North Vietnamese guerrillas, under the leadership of devoted Socialist and Marxist Ho Chi Minh, with massive military aid, including aircraft, radar, artillery, air defense systems, small arms, ammunition, food, and medical supplies. North Vietnamese fighter pilots were also being trained in the Soviet Union prior to their combat deployment against the Americans in South Vietnam.

In exchange, after the fall of Saigon, the Soviet Union gained access to a naval base at Cam Ranh Bay, where it deployed its pacific fleet. The base became a key Soviet asset for its power-projection and intelligence-gathering capabilities.