The Order of Victory, the world’s most expensive military decoration (VIDEO) 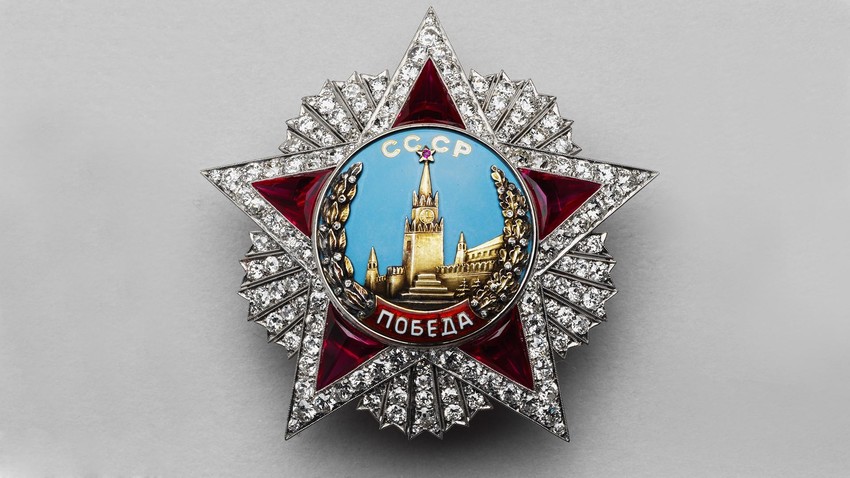 The Order of Victory

Museums of the Moscow Kremlin
The Order of Victory is the most distinguished of all orders ever awarded to anyone in Russia - and the most expensive. It is also one of the rarest in the world – only 22 copies were made.

The Order of Victory is officially the most expensive honor in the world. If it could theoretically be posted at any auction, and the starting price would be more than 20 million U.S. dollars. The last Knight bestowed with this order, Michael I of Romania, died in 2017. However, the fate of his medallion is unclear – officially, it is stored in Michael I’s estate in Versoix, Canton of Geneva, Switzerland. But there are rumors Michael I sold his Order in the 1980s for about 4 million dollars.

The Order of Victory was awarded only to Generals and Marshals for their actions in planning and military administration resulting in a “successful operation within the framework of one or several fronts resulting in a radical change of the situation in favor of the Red Army”, the order’s statute says. Why and when did the USSR need such a special honor for its military men?

Not a step back! 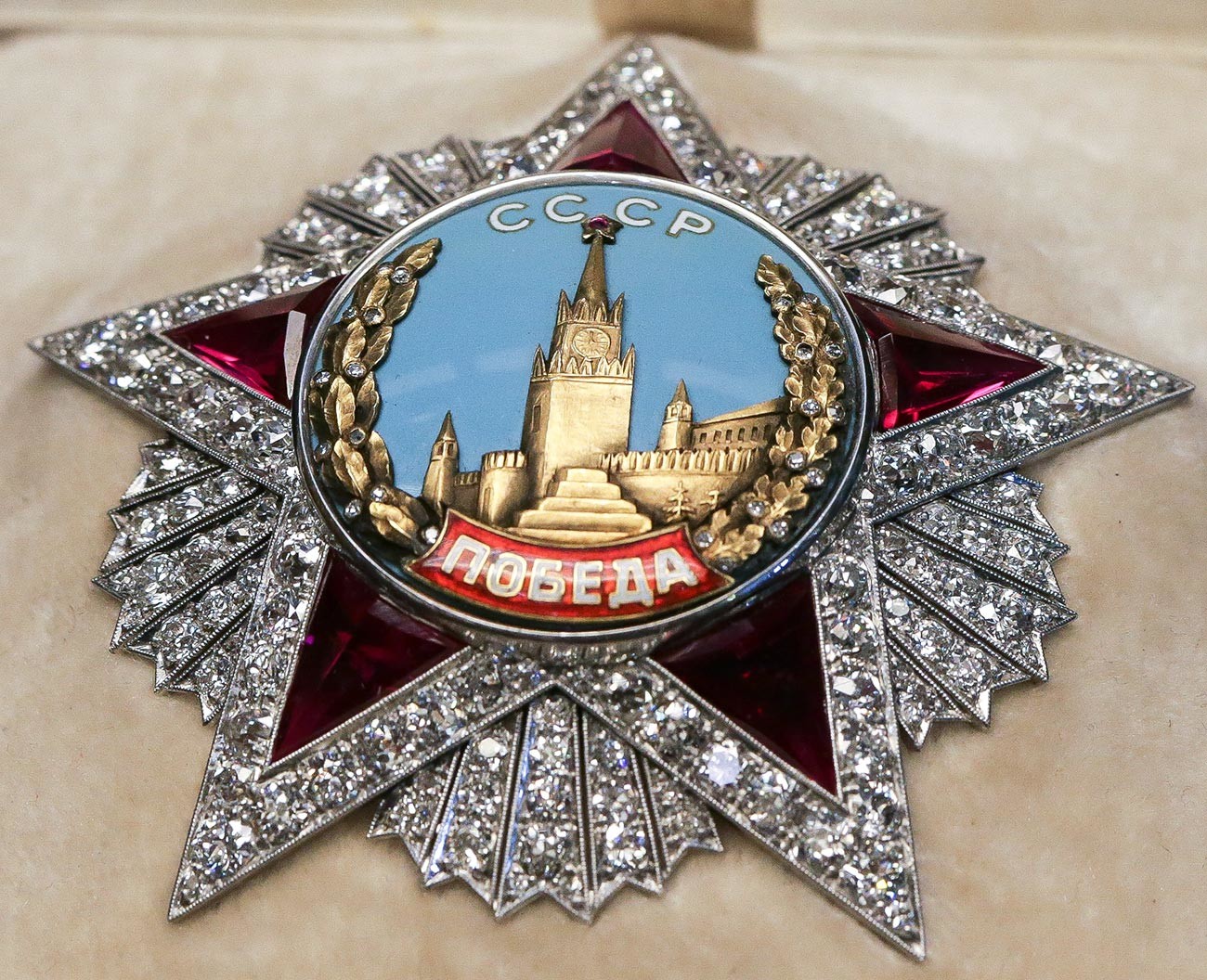 The decision to create the Order of Victory was taken in the wake of the first major success of the Red Army in World War II, after the Battle of Stalingrad, which raged from July 1942 to February 1943.

The year 1942 in total was an unbearably hard time for the Soviets in the Great Patriotic War (WWII). The Red Army suffered drastic losses with the onslaught of the Nazis to the Russian South, and soldiers were terrified of their impending fate. To strengthen the discipline in the army through fear, Joseph Stalin, acting as the People’s Commissar of Defense, issued the decree No. 227 of July 28, 1942, that was dubbed “Not a step back!” in the Soviet mass propaganda.

The decree established penal battalions that were to be sent to the most dangerous sections of the warfield. These battalions were manned with the soldiers who had previously tried to defect. But Stalin also understood that to lift the spirits of his war commanders, he was unable to use fear only. Commanders are ambitious, so there should actually be some positive stimuli and distinguishments meant for them.

So, in 1942-1943, Stalin initiated the creation of several orders meant for military commanders. The orders were named after the great military masterminds of Russia: Alexander Suvorov, Mikhail Kutuzov, admirals Fedor Ushakov and Pavel Nakhimov.

The tower marks the victory 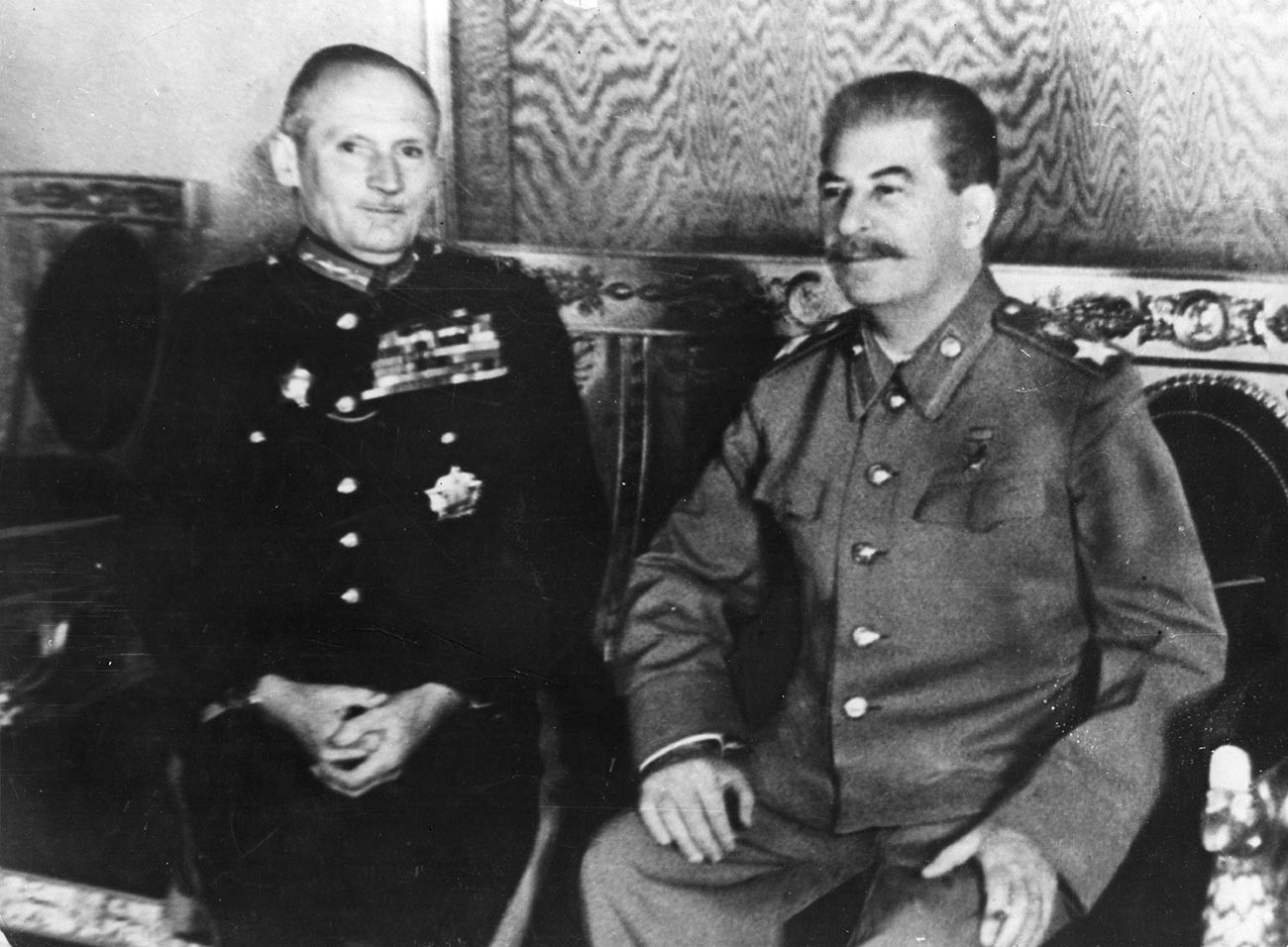 Stalin didn’t like the designs, though. So in October 1943, instead of Lenin’s and Stalin’s profiles on the obverse (front) of the medallion, Stalin ordered the Spasskaya tower (the clock tower) of the Moscow Kremlin to be pictured on the medallion’s obverse. On November 5, 1943, Stalin approved the final version of the design. He liked the “test sample” so much that he kept it. Three days later, the order was officially established, while the production of the order’s insignia began.

The design of the order was created by artist Alexander Kuznetsov (1894-1975), who also designed another high-ranking military award, the ‘Patriotic War’ Order. The insignia was to be made with diamonds and rubies, so the creation was entrusted to the specialists at the Moscow Jewelry and Clock factory.

READ MORE: 5 most important honors of the Russian Empire

Initially, the plan to create 30 copies of the order was made. Each one required 180 diamonds, 50 rose-cut diamonds, and 300 grams of platinum. In total, the creators received 5,400 diamonds, 1,500 rose-cut diamonds, and 9 kilograms of platinum. However, artificial rubies were eventually used for the order’s medallions, because natural rubies all had color tints different from each other, which would make the medallions look spotted.

All the Orders were handmade. 22 were created in total, but 3 of them were never awarded. As the 2010 expert examination conducted by the Museums of the Moscow Kremlin showed, the medallions contained diamonds that were from the orders and jewelry worn by members of the Romanov family! After the fall of the Russian Empire, these awards and jewelry had been taken out of the tsars’ treasury, dismantled, with the stones going to the Soviet vaults.

The fascinating medallions of the Order and where are they now

Order of Victory – Museums of the Moscow Kremlin

Each Order of Victory is made of platinum, while the inscription ‘ПОБЕДА’ (“Victory”) is made out of gold. The medallion has 174 diamonds (16 karats in total) and 5 artificial 5-karat rubies, 25 karats in each. The details (the Kremlin wall, Mausoleum, the branches of oak and laurel, encrusted with small diamonds, are made of gold-tinted platinum. Only the fastening details, the screw, and the nut are made out of silver. The Order weighs 78 grams in total. The unique feature of the order’s medallions is that they have no serial numbers on them – the award was initially designed to be one of the rarest in existence. There are some orders that exist in fewer copies, but they can’t rival the Order of Victory in terms of value. 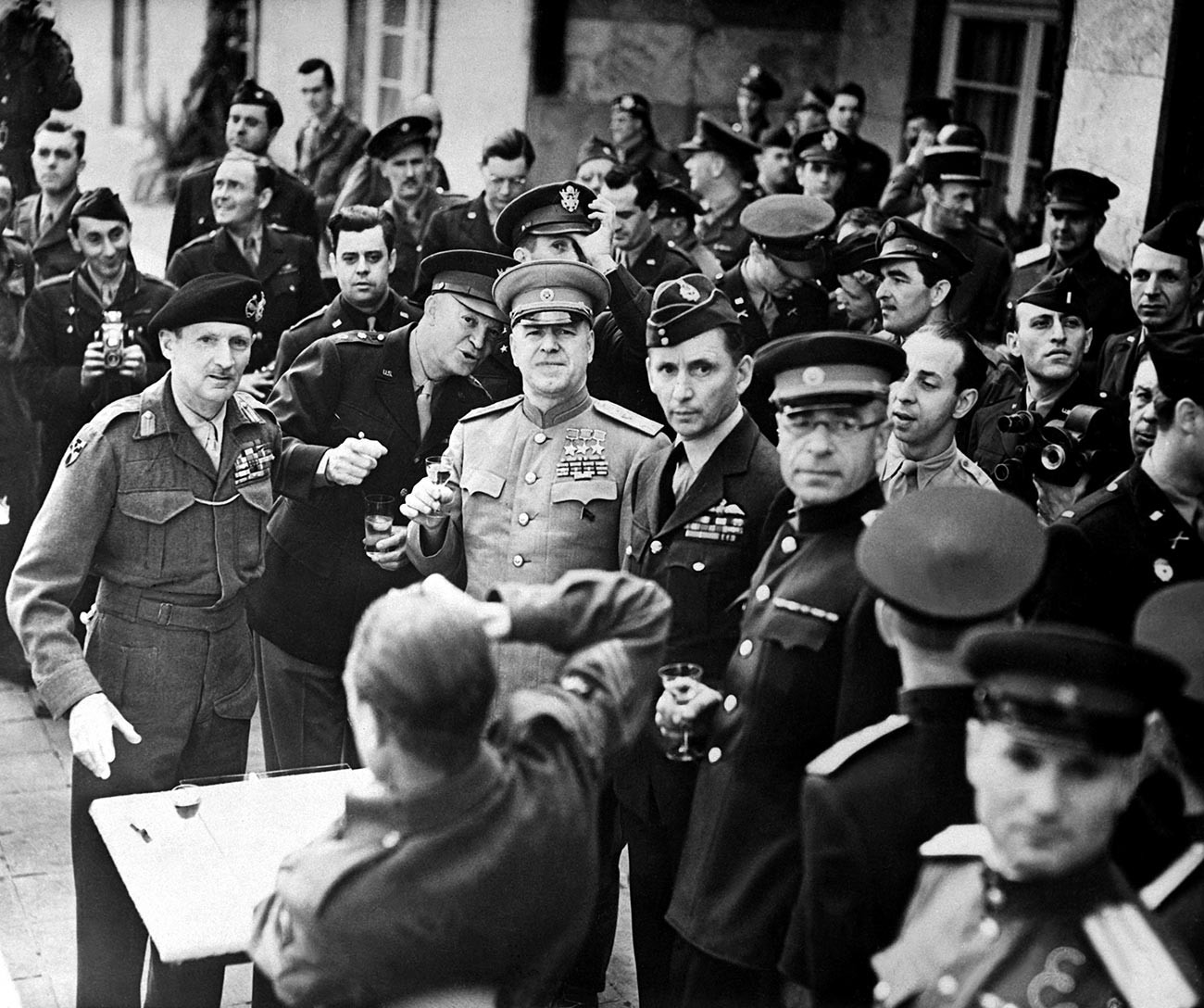 US Office of War Information

The first time the Order was awarded was on April 10, 1944 – to Marshal Georgy Zhukov (1896-1974), Marshal Alexander Vasilevsky (1895-1977), and the Commander in Chief Joseph Stalin. All three were awarded in honor of the liberation of right-bank Ukraine. Later, in 1945, the same three commanders were honored with the Order for the second time.

In total, the Order was awarded 20 times to 17 people, three of them (mentioned above) were distinguished with it twice, and one had been deprived of the award posthumously. General Ivan Chernyakhovsky (1907-1945) was to be awarded the Order on February 23, 1945, but he died on February 18th, and so wasn’t “knighted”. 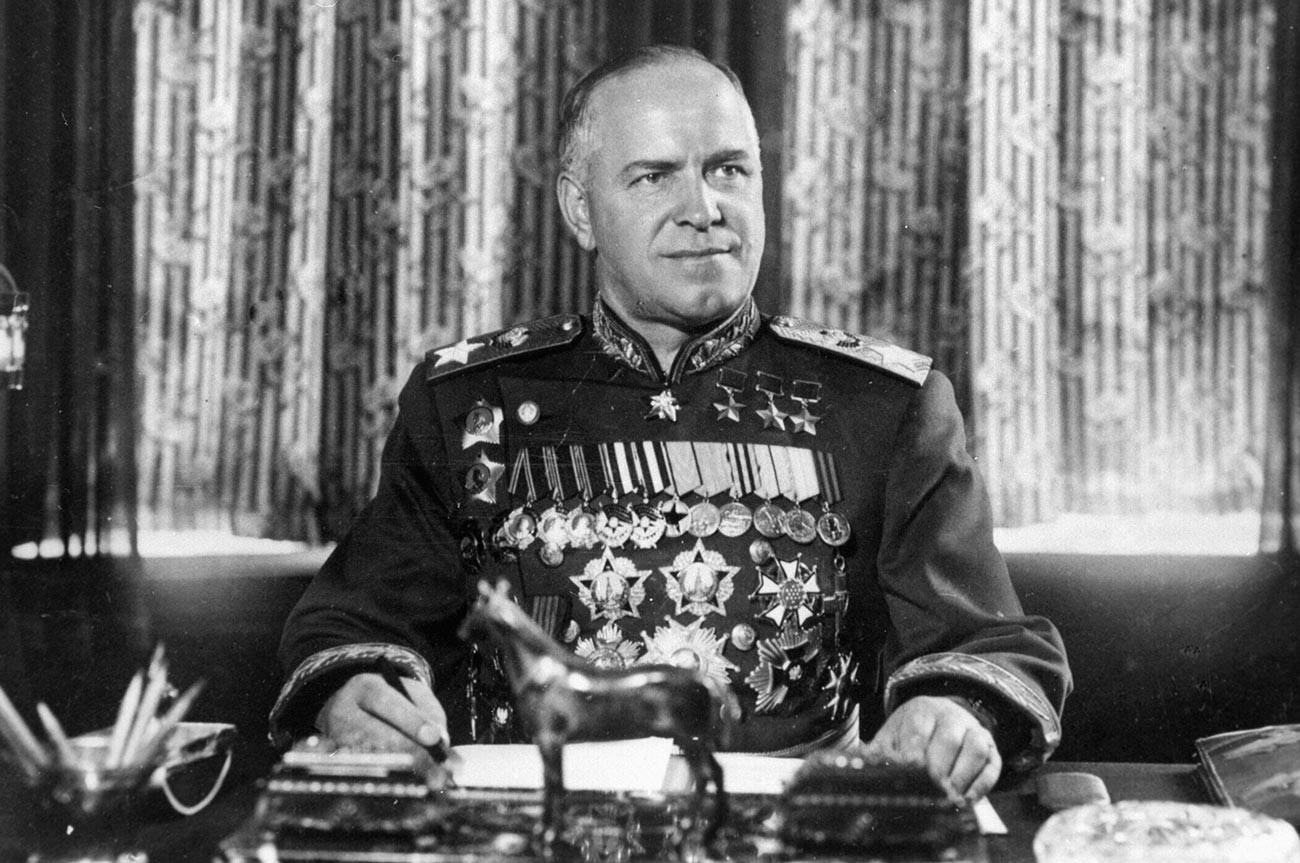 The Order was also awarded to 5 foreigners. British Field Marshal Bernard Montgomery and American President Dwight Eisenhower were awarded it on June 5, 1945, “for extraordinary successes in conducting large-scope military operations that resulted in the victory of the United Nations over Hitler's Germany”.

King Michael I of Romania was awarded it on July 6, 1954, for his decision to arrest Nazi collaborators within the Romanian government, which happened on August 23, 1944, while the decisive victory over Nazis wasn’t yet achieved. 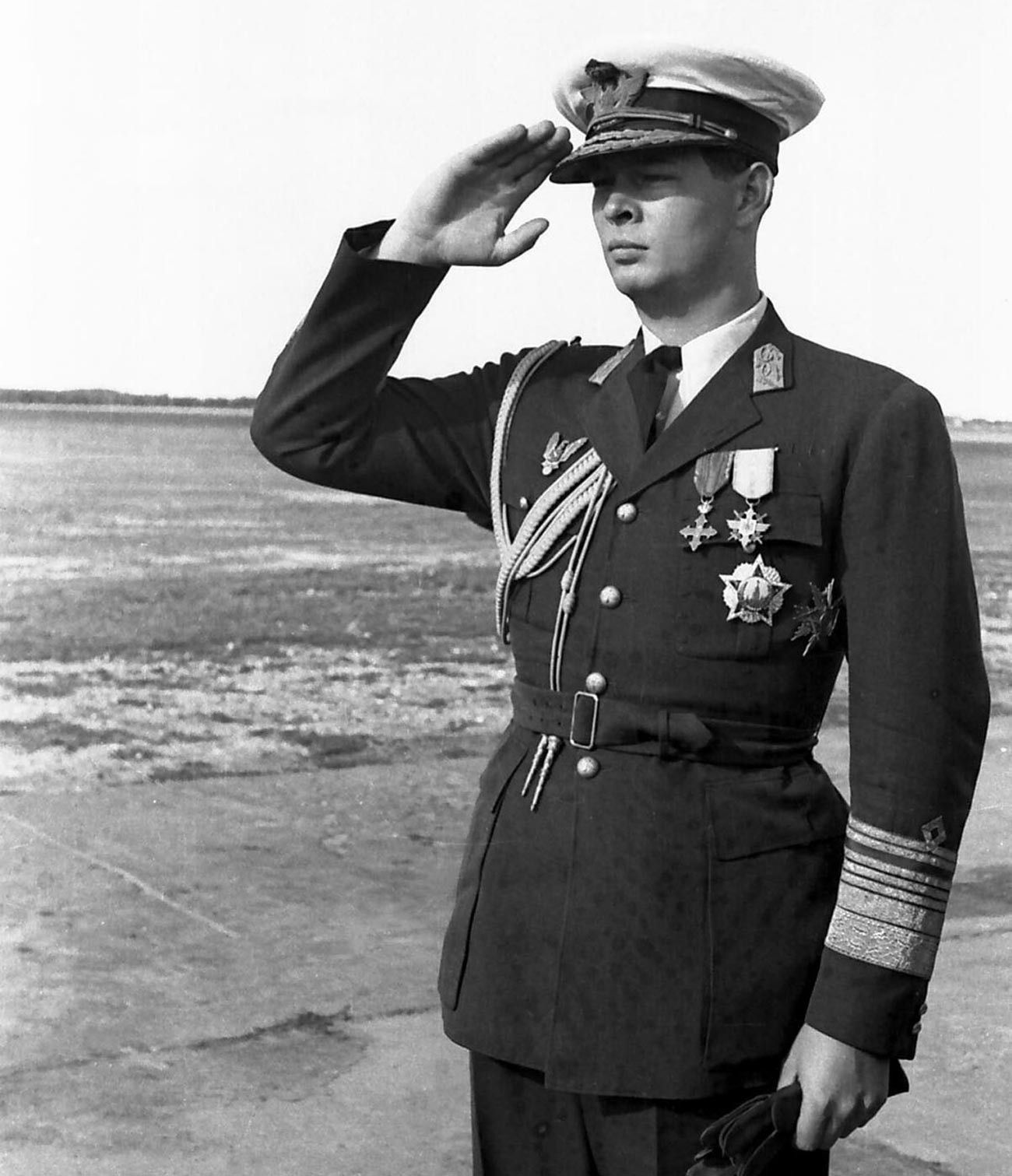 King Michael I of Romania wearing his Order of Victory

General Secretary of the Central Committee of the Communist Party of the USSR Leonid Brezhnev, who was awarded the Order in 1978, was posthumously deprived of it in 1989 because it was deemed that awarding this Order to Leonid Brezhnev was against the Order's statute – Brezhnev didn't conduct any decisive military operations in World War II. The order to posthumously deprive Brezhnev of the decoration was signed by Mikhail Gorbachev. 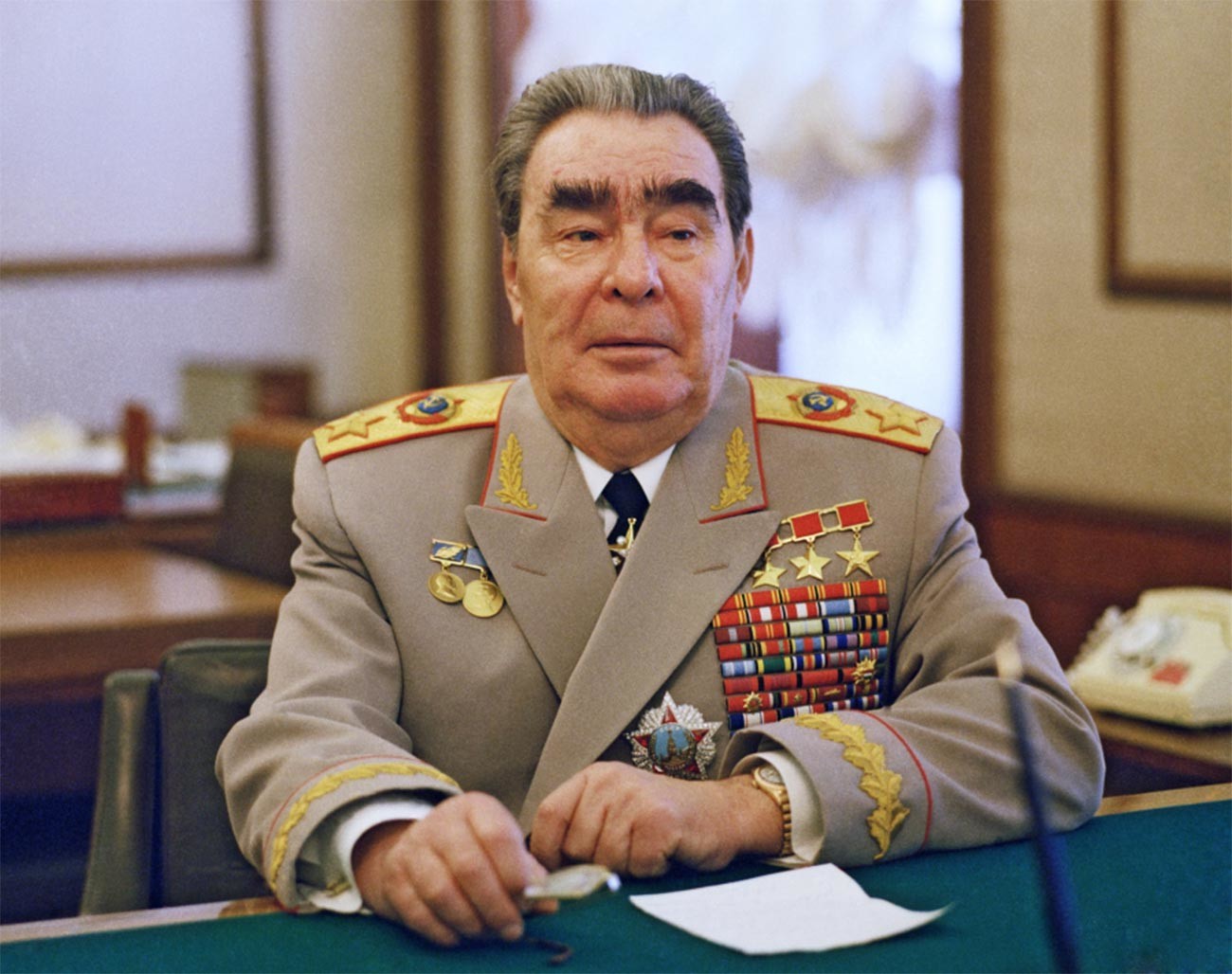 The Museums of Moscow Kremlin have the biggest collection of the medallions of the Order of Victory: 8 in total. One of the medallions, that formerly belonged to Marshal Semen Timoshenko (1895-1970), and another one, that was never awarded, are stored in the Museum of the State Fund of Precious Metals and Precious Stones of the Russian Federation (Gokhran). Another un-awarded Order medallion is stored in the State Hermitage. The whereabouts of the third un-awarded Order medallion is unknown. Also, it’s unclear where exactly the medallion awarded to Michał Rola-Żymierski is.