‘Red Emma’: Once the most dangerous woman in the U.S. 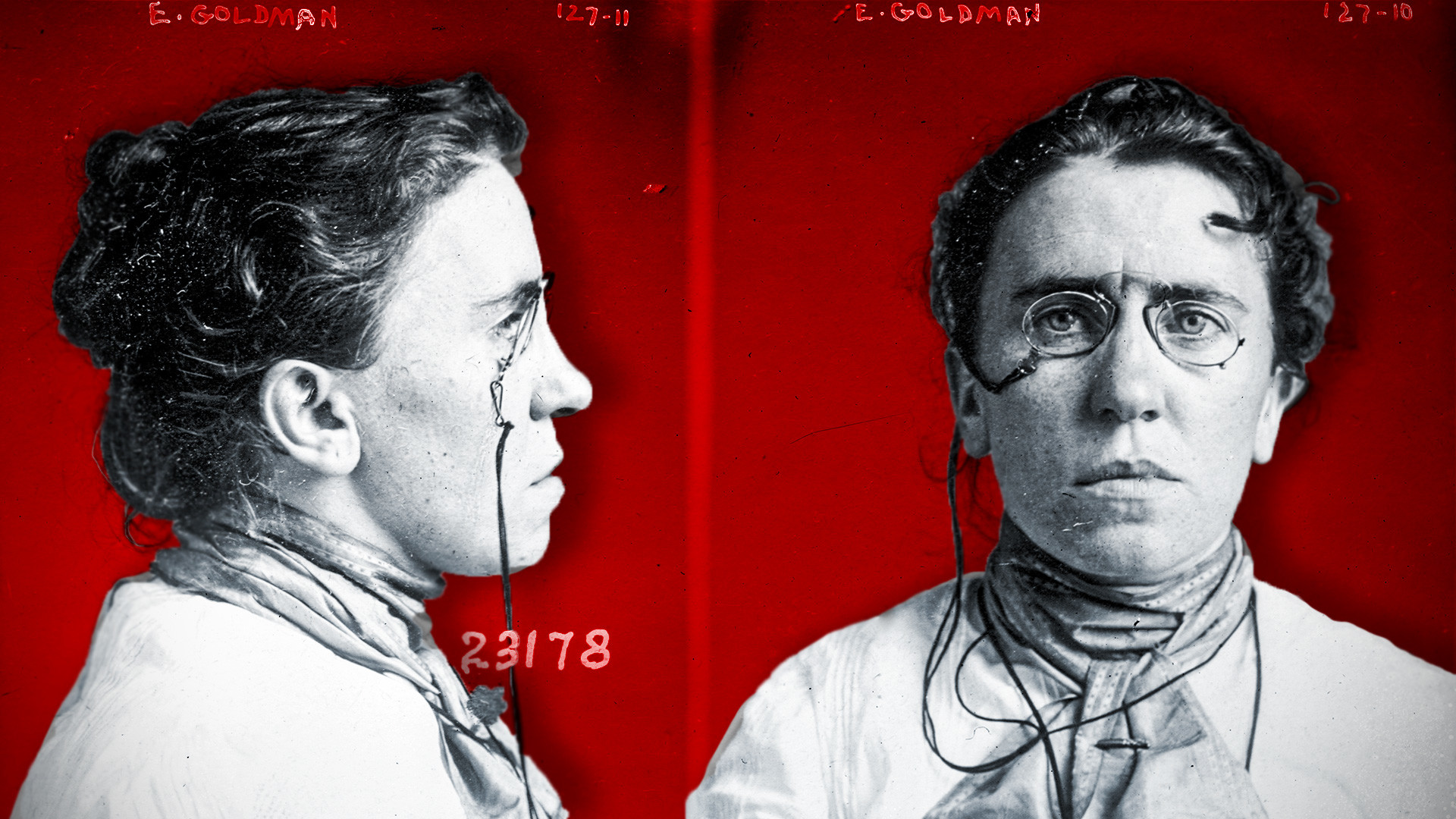 Mug shot taken in 1901 when Goldman was implicated in the assassination of President McKinley.

Library of Congress, Russia Beyond
For many years, Emma Goldman was a massive thorn in the side of the United States government. But it’s not like her relationship with Soviet rule was any better...

“Demonstrate before the palaces of the rich; demand work. If they do not give you work, demand bread. If they deny you both, take bread,” Goldman feverishly once proclaimed at a New York workers’ demonstration in 1893. For ‘Red Emma’, one of the most recognizable leaders of the early 20th century anarchist movement, no method of pursuing social justice was off the table.

Her turbulent activism, directed at the American regime of the time, turned her into an enemy of the state. The first Director of the FBI, John Edgar Hoover, once referred to Goldman as “the most dangerous woman in America”. 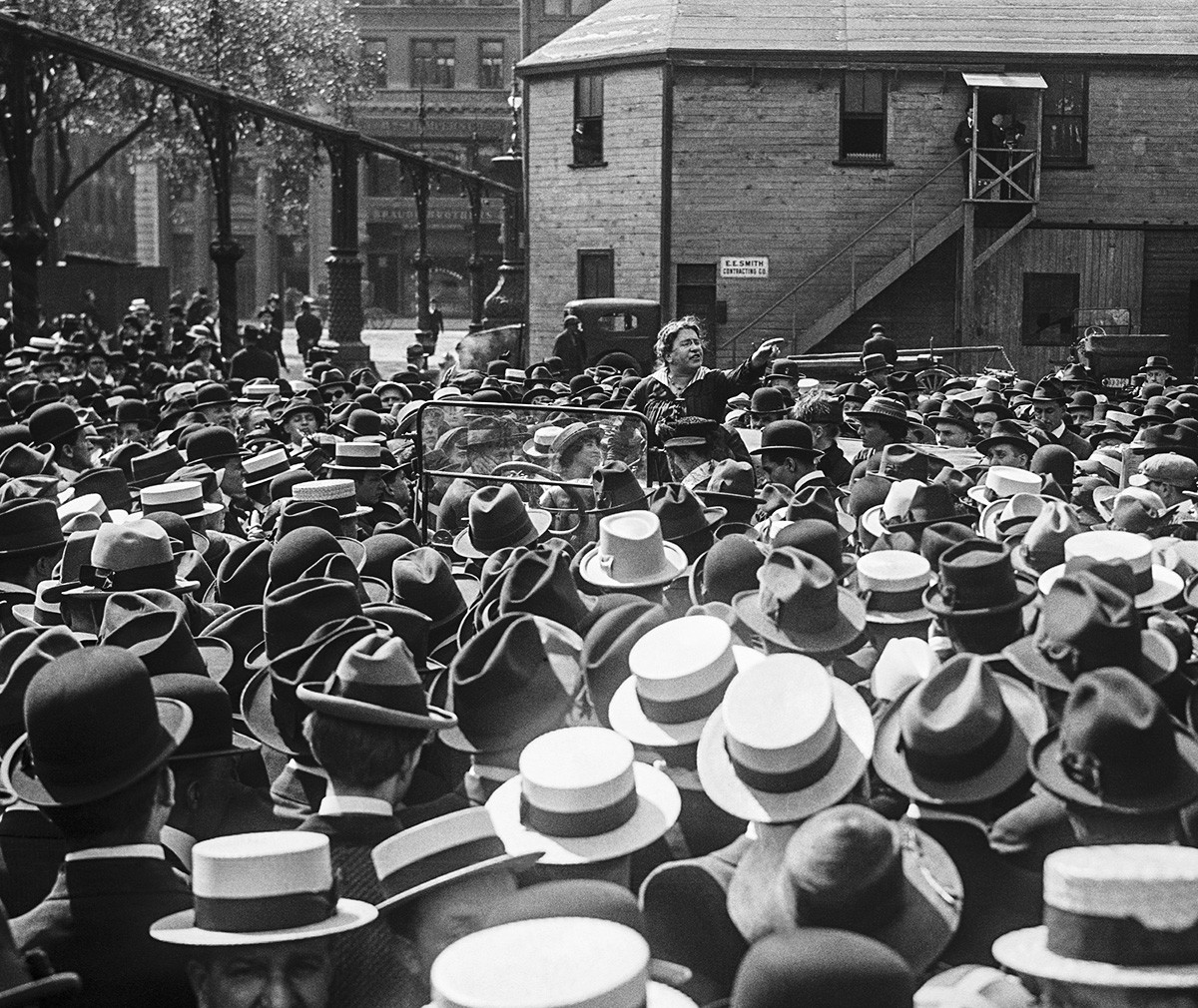 Emma Goldman was born into a Jewish family on the western outskirts of the Russian Empire, but at 17, she relocated to the U.S., where she immediately joined the local anarchist movement.

“I want freedom, the right to self-expression, everybody’s right to beautiful, radiant things. Anarchism meant that to me, and I would live it in spite of the whole world — prisons, persecution, everything. Yes, even in spite of the condemnation of my own closest comrades, I would live my beautiful ideal,”  she wrote in her 1931 autobiography, ‘Living My Life’.

Berkman's attempt to assassinate Frick, as illustrated by W. P. Snyder for Harper's Weekly in 1892.

In 1892, she helped her lover and ally, Aleksandr Berkman, to carry out an attempt on the life of the “most hated man in America”, Henry Clay Frick - a vicious industrialist and the trade unions’ worst nightmare. The mission was a failure, with Berkman sentenced to 14 years in prison. Goldman herself had managed to avoid a prison term, but faced numerous subsequent arrests for inciting riots, distributing banned literature, as well as also attempting to assassinate President William McKinley (although her complicity was never proven).

Goldman was stripped of U.S. citizenship as far back as 1908, but had continued to live in the United States, fighting for her ideals. Nevertheless, the government did eventually manage to find a way to get rid of its “worst enemy”. 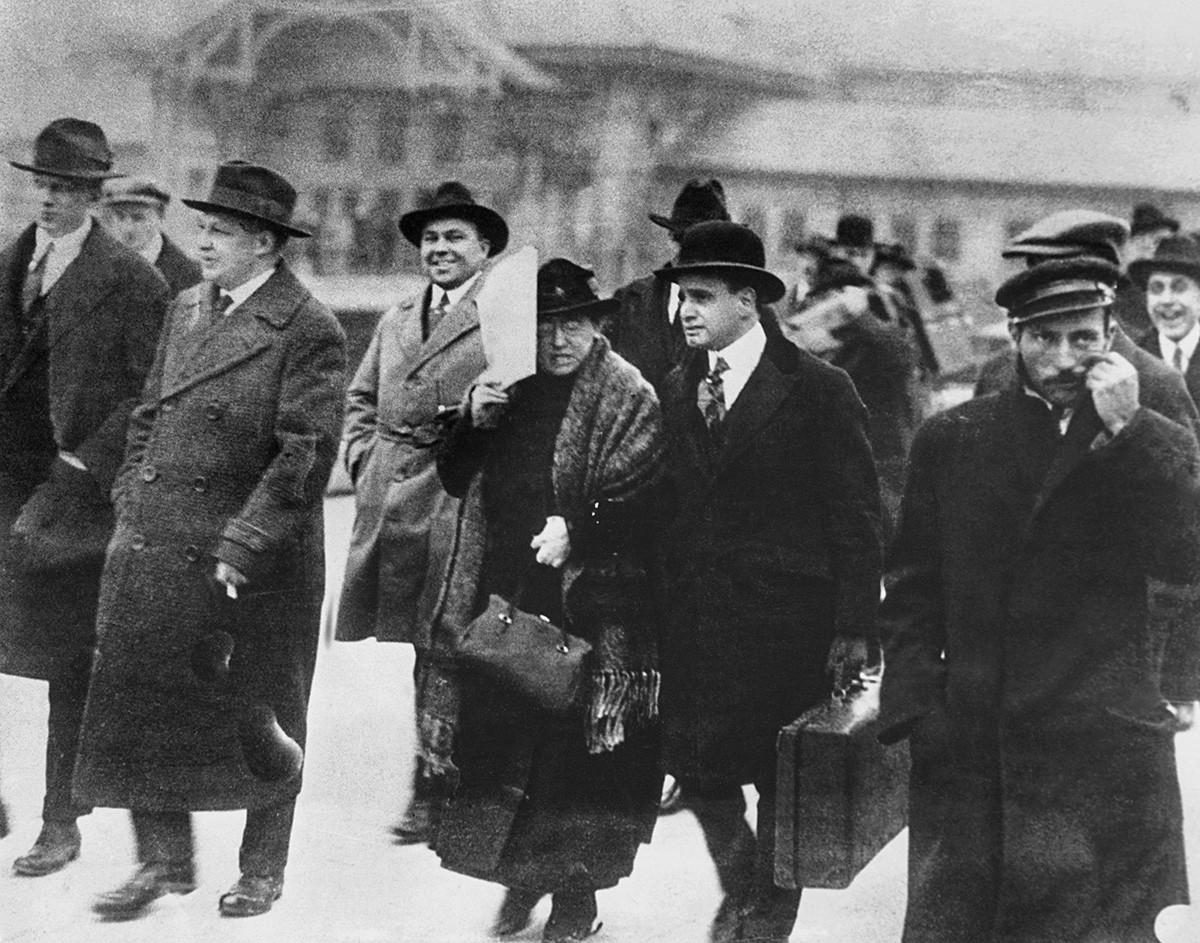 Emma Goldman with Attorney Harry Weinberger on the way to Ellis Island for departure.

In June 1919, a series of terrorist attacks took place in several U.S. cities, carried out by followers of Italian anarchist Luigi Galleani as a show of opposition to judges and district attorneys. Despite there being no casualties, the resulting panic had the whole country on edge. The period became known as ‘The First Red Scare’.

Unprecedented emergency measures were enforced, leading to the so-called Palmer Raids, taking their name from their organizer, Attorney General Alexander Mitchell Palmer. A total of 249 leftist radicals and anarchists were detained. Most of them Russian immigrants without U.S. citizenship. Goldman was among their ranks: she was accused of inciting a riot - a charge compounded by her previous run-ins with the law. She and her cohorts were swiftly put on the USAT Buford and shipped off to Soviet Russia. The ship became known in the media as the ‘Soviet Ark’. Hoover - then Special Assistant to the Attorney General - was a key voice in the campaign to dispose of ‘Red Emma’. 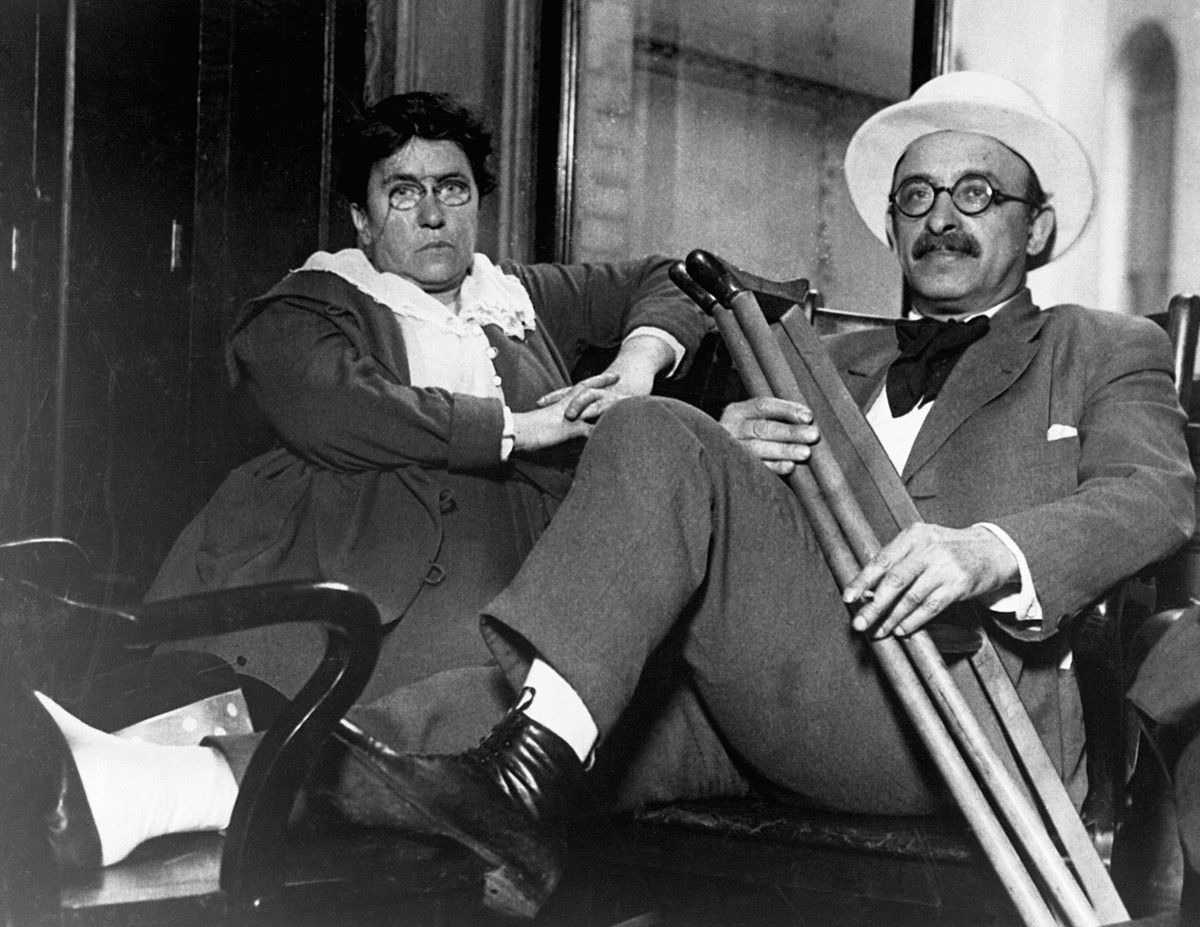 Despite the fact that Goldman’s anarchism had long parted ways with Marxism (an ideology she referred to as “a cold, mechanistic, enslaving formula”), she still harbored great hopes in “the land of victorious socialism”. It wasn’t long, however, before those hopes would also be dashed.

‘Red Emma’ was not at all pleased with the Bolshevik campaign of intimidation against their comrade-anarchists, especially the unwieldy bureaucratic apparatus the Bolsheviks had created. In the course of her meeting with Vladimir Lenin - the ‘father’ of the Russian Revolution - she became completely disenchanted by the “shrewd Asiatic’s” position on freedom of speech as something that could be sacrificed in view of extenuating circumstances.

The quelling of the Kronstadt sailor rebellion of 1921 became the last straw for Goldman, even though she herself was not above using violent means to achieve political ends: “One cannot be too extreme in dealing with social ills; besides, the extreme thing is usually the true thing,” she once wrote. Despite that position, the violence at Kronstadt was too much for her: “I saw before me the Bolshevik State, formidable, crushing every constructive revolutionary effort, suppressing, debasing, and disintegrating everything,” she wrote in another essay titled ‘My Disillusionment in Russia’. 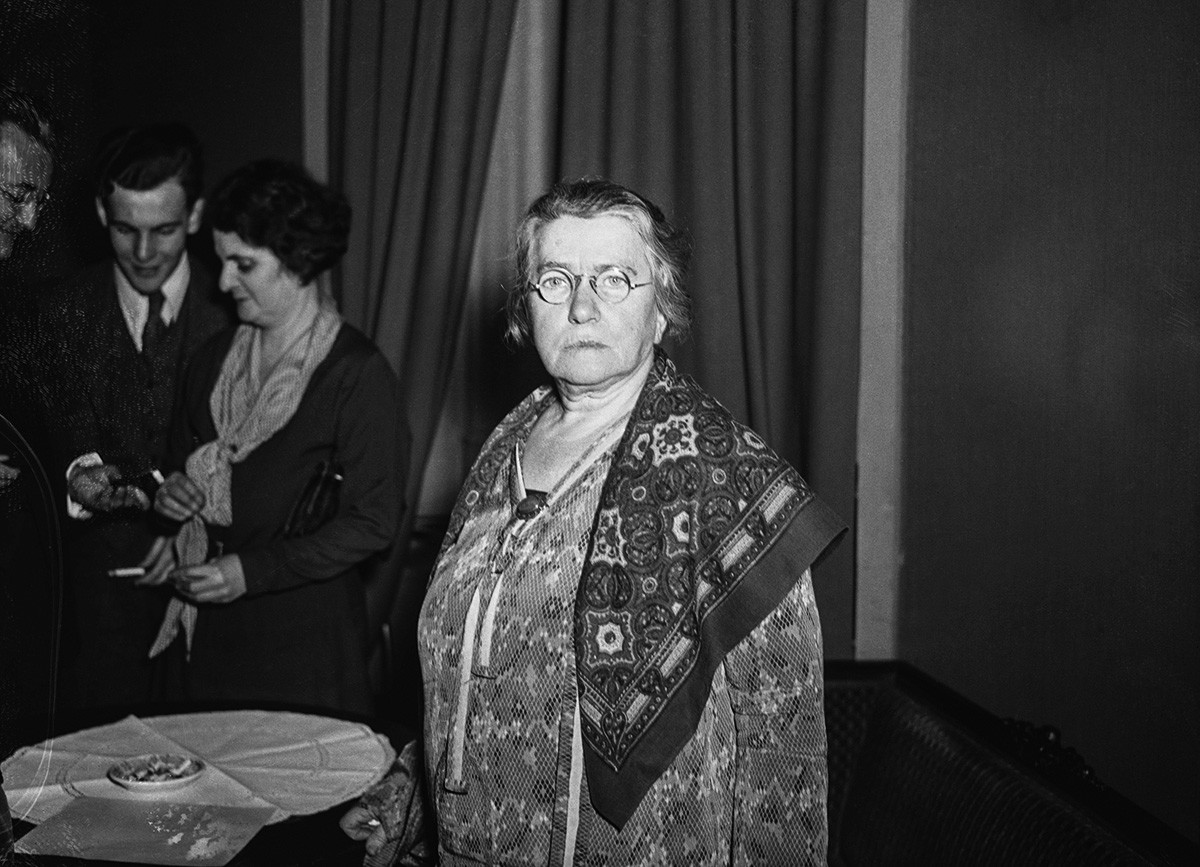 Goldman and Berkman, having traversed that difficult path together, finally left Russia to never return. What lay ahead were years of roaming foreign countries in search of a new home.

Most of Goldman’s followers turned away from her, due to her refusal to side with the Bolshevik rule. However, this did not result in ‘Red Emma’ abandoning her ideas about Soviet Russia.

Emma Goldman passed away on May 14, 1940, in Toronto. The U.S. government made subsequent peace with its old enemy and gave permission for her remains to be laid to rest on American soil. Engraved on her final resting place in Forest-Park, Illinois, is one of her famous quotes: “Liberty will not descend to a people, a people must raise themselves to Liberty.”