The Russian daredevil who helped to build America’s nuclear weapon 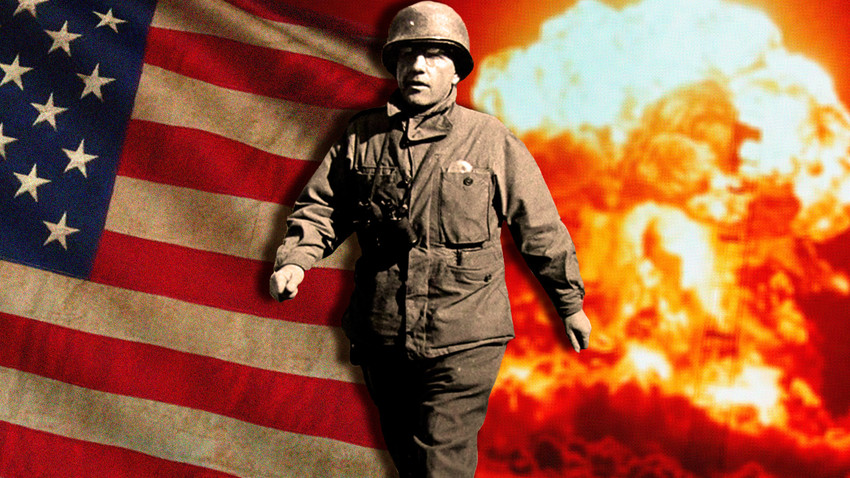 A wartime chronicle of 1945 shows a group of American and British soldiers, smiling and waving hands, as they advance eastward from liberated France towards the German cities. They belonged to a very specific unit – the joint U.S.-UK ‘Alsos Mission’ team, whose aim was to get their hands on Germany’s atomic secrets before the Soviets, for the sake of American and British nuclear programs. And Alsos Mission was a huge success.

“The captured uranium, the documents and the scientists were worth their weight in gold for the Manhattan Project and for the future Cold War,” explains British WWII historian Mark Felton in the documentaryHunting Heisenberg: Capturing Germany’s Atomic Secrets. 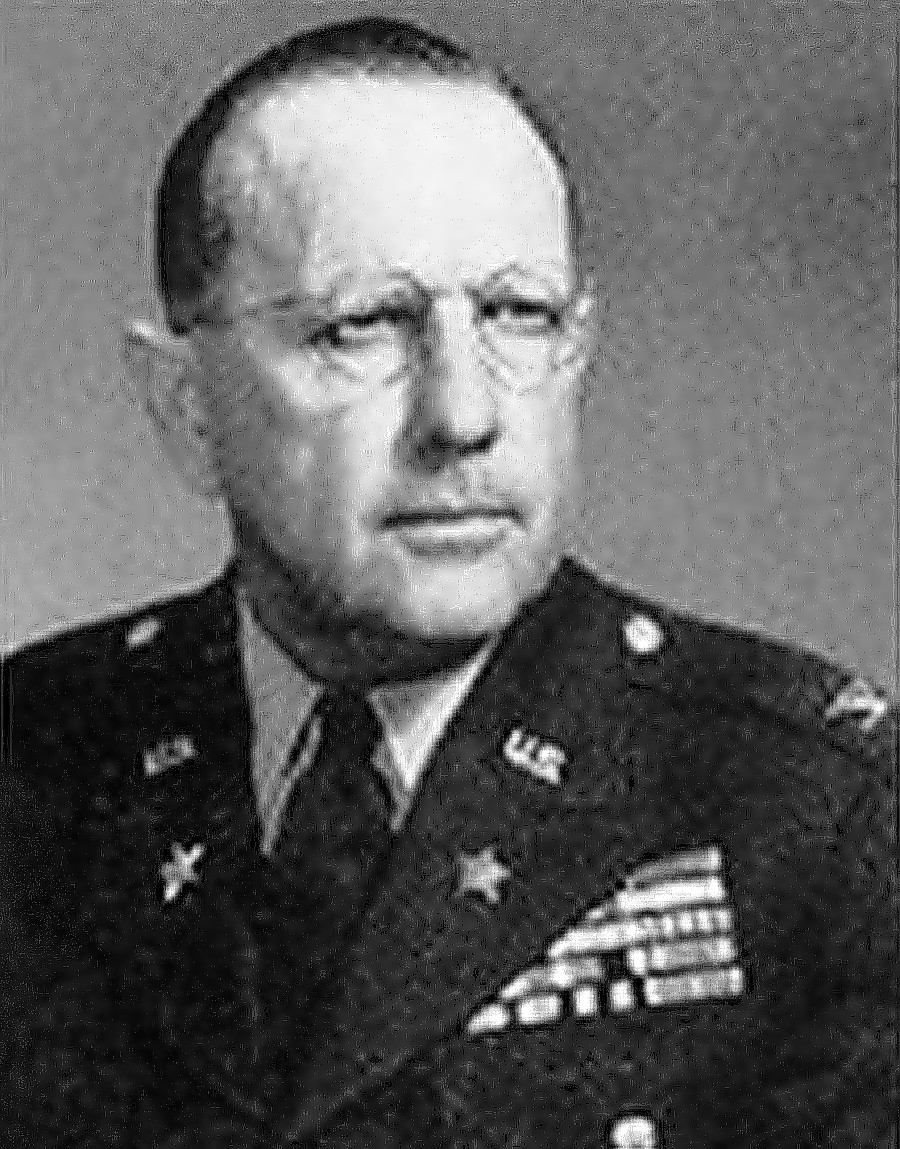 In this documentary, you can see the person who led the Alsos Mission – a bit short, but burly man in glasses, Col. Boris Pash. “There would have been no Hiroshima and Nagasaki if not for Boris Pash,” notes (link in Russian) Russian historian Ivan Kurilla from the European University of St. Petersburg. Pash certainly did his best to outrun the Red Army in the race for Germany’s atomic project – after all he, originally Boris Pashkovsky, hated the Reds who stole his country.

Though an ethnic Russian, Boris Pashkovsky was born on U.S. soil in 1900. His father was Feodor Pashkovsky, a priest serving in the American mission of the Russian Orthodox church. Raised in the traditions of Orthodoxy and bilingual in Russian and English, in 1913 ten-year-old Boris followed his father when he returned to the Russian Empire – but managed to keep his U.S. citizenship, which turned out to be extremely useful. 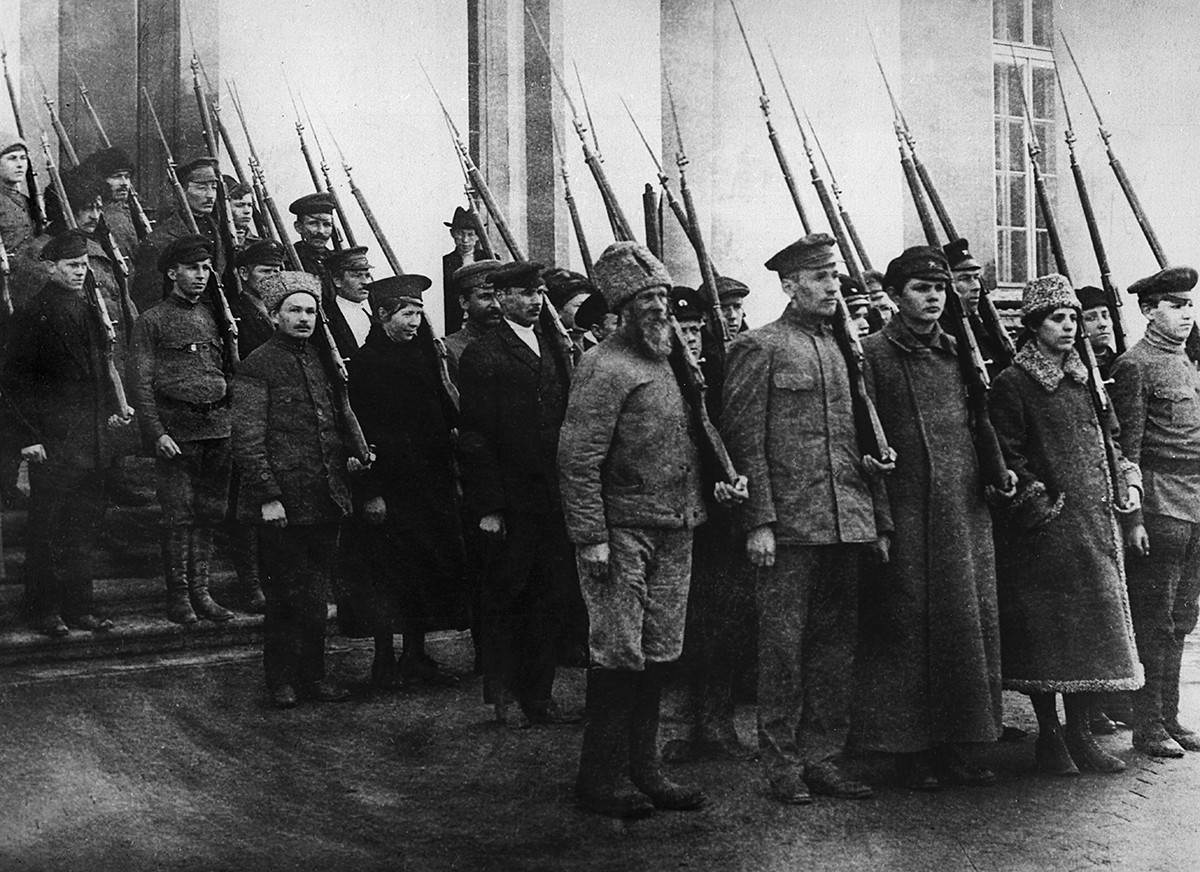 In 1916-1917, both father and son joined the ranks of Russian army as it fought against Germany and Austro-Hungarian Empire in WWI: Feodor – as a military chaplain, 16-year-old Boris – as an artillery private. The Paskovskys, devoted Christians and monarchists, didn’t embrace the communist revolution of 1917 and Boris served in the White Army as it tried to stop the Bolsheviks from taking control of Russia. However, in vain.

“Leaving Russia on a Red Cross ship, Pashkovsky remembered the faces of thousands of people crowding the dock, hoping to get out. For long years ahead, those who left then would be dreaming of coming home and having their revenge,” Oleg Bėĭda, a military historian specializing in Russian emigration, wrote (link in Russian). After several years in Europe, Boris returned to the U.S., where he dropped the Slavic ending of his surname – from then on, he was Boris Theodore Pash. As many White emigres, he became a hardline anti-communist.

For a while, Pash lived as an ordinary citizen – wife, kids, church on Sunday (Orthodox, of course). He moved from Springfield to Chicago and then to L.A. to work as a gym teacher at schools. In 1930, he joined the military again – this time, the U.S. Army Reserve. The command noted his knowledge of Russian and communication skills, and in case of mobilization, he was expected to work in counter-intelligence. Moreover, as Pash himself would later assert, from 1925, he worked with the FBI as a reservist. 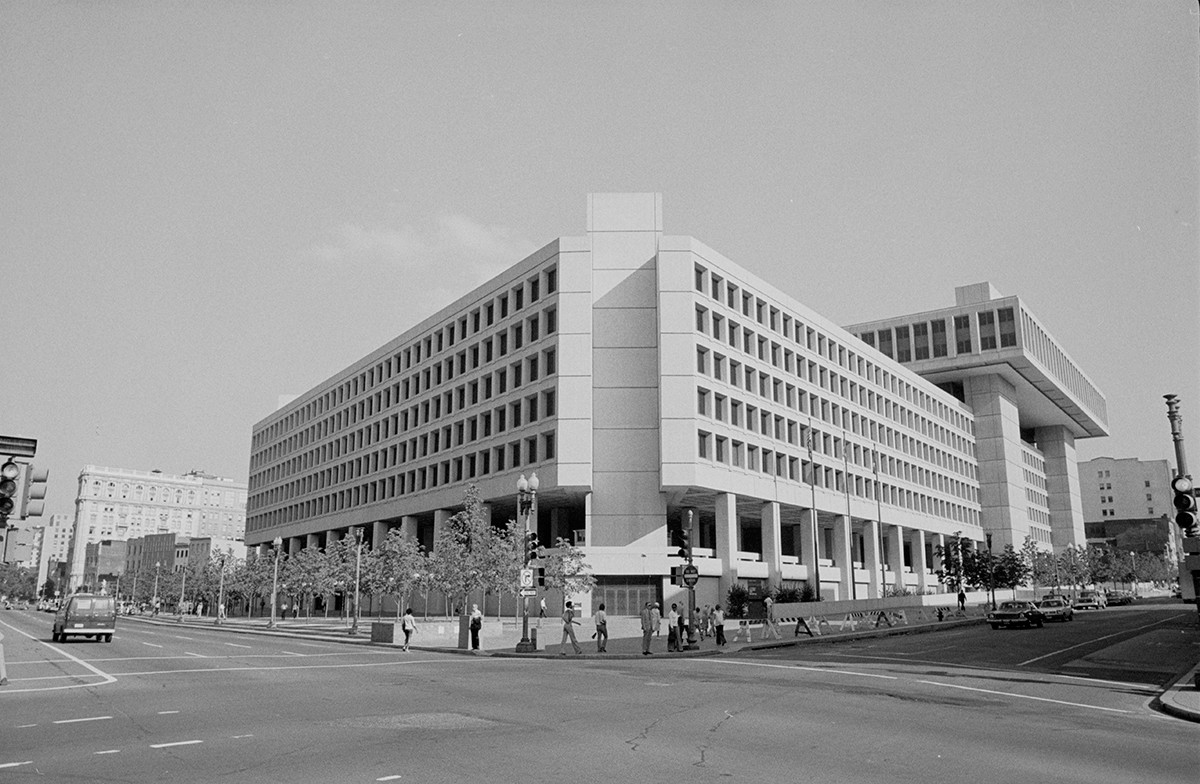 “He was never officially an FBI employee, but it’s possible that he was fulfilling some ad hoc tasks and informed the Bureau on things,” Ivan Kurilla suggests. In any case, in 1940, Pash, already a captain, entered the active military. During World War II, his career development was rapid: in 1942, Major Pash was appointed as chief of counterintelligence at the IX Corps Area headquarters in San Francisco. Throughout 1942-1943, he was flying all over the U.S. fighting “inner enemies”, first of all – “those damn commies”.

On this job, he showed himself as a persuasive, talented officer – Kurilla, quoting impressions of American officers who knew Pash, concludes he was “a natural-born manipulator, propagandist and recruiter. It seemed impossible to fool him”. Nevertheless, not everyone was happy with Pash – George Kistiakowsky, a physical scientist at the Manhattan Project, referred to him like this: “A really wild Russian, an extreme right-wing, sort of Ku Klux Klan enthusiast. He was really quite a character, this Boris Pash.”

Pash wasn’t very polite with scientists whom he encountered while coordinating the safety of America’s nuclear program. He especially disliked Robert Oppenheimer, the future “father of the bomb” for his left-wing views, suspecting that he was Moscow’s spy and even demanding his dismissal from the project – but Gen. Leslie Groves, Pash’s boss, insisted that Oppenheimer stay.

Perhaps not a ‘Mr. Nice Guy’ for co-workers, Pash did show himself as an outstanding officer throughout the Alsos Mission (1943-1945), which he headed as a military commander. The Alsos scientists and soldiers acted bravely – not only were they first among the Allies in entering the cities liberated from the Germans, in 1945, they were working behind enemy lines to prevent the Soviets from capturing Germany’s nuclear capabilities. 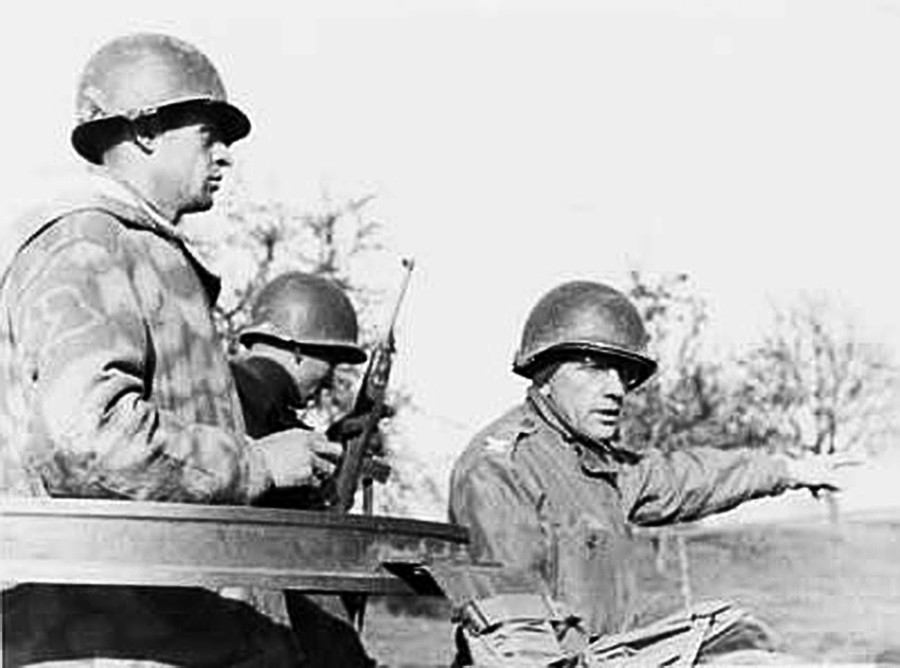 Boris Pash at the end of WWII in Germany.

Boris Pash served as a good example. For instance, in April 1945, his group discovered a secret storage of radioactive radium in the city of Weida, hours before the Soviets took the city – unfortunately, unshielded (and thus, very dangerous). Pash, not eager to risk his soldiers’ lives, put the radium in his bag and drove it in his car back to the zone of Allies control himself, with the radioactive bag literally next to his side. As a result, as one visitor to a 92-year-old Pash recalled in the 1990s, even 50 years after the war “he was suffering from a painful war-incurred radiation burn on his right leg.”

The other example of Pash’s audacity is described by Oleg Bėĭda – behind enemy lines, instead of waiting for the U.S. army to come and capture the German town of Tannheim, Pash just called the burgomaster on the phone from the hotel near the city and said: “I am a U.S. Army Colonel, you have 15 minutes to raise the white flag.” Tannheim capitulated immediately, though Pash didn’t even have enough people to storm it – the Germans believed his bold bluff. It comes as no surprise that his soldiers were extremely loyal to their charismatic leader, as Pash’s colleagues reported.

Colonel’s after-war activities are not as well documented (to be more precise – still classified). In 1948-1951, he worked as a military representative to the CIA, in charge of the controversial PB-7 program, allegedly closely connected with anti-communist activities in Europe, including killings and kidnappings. 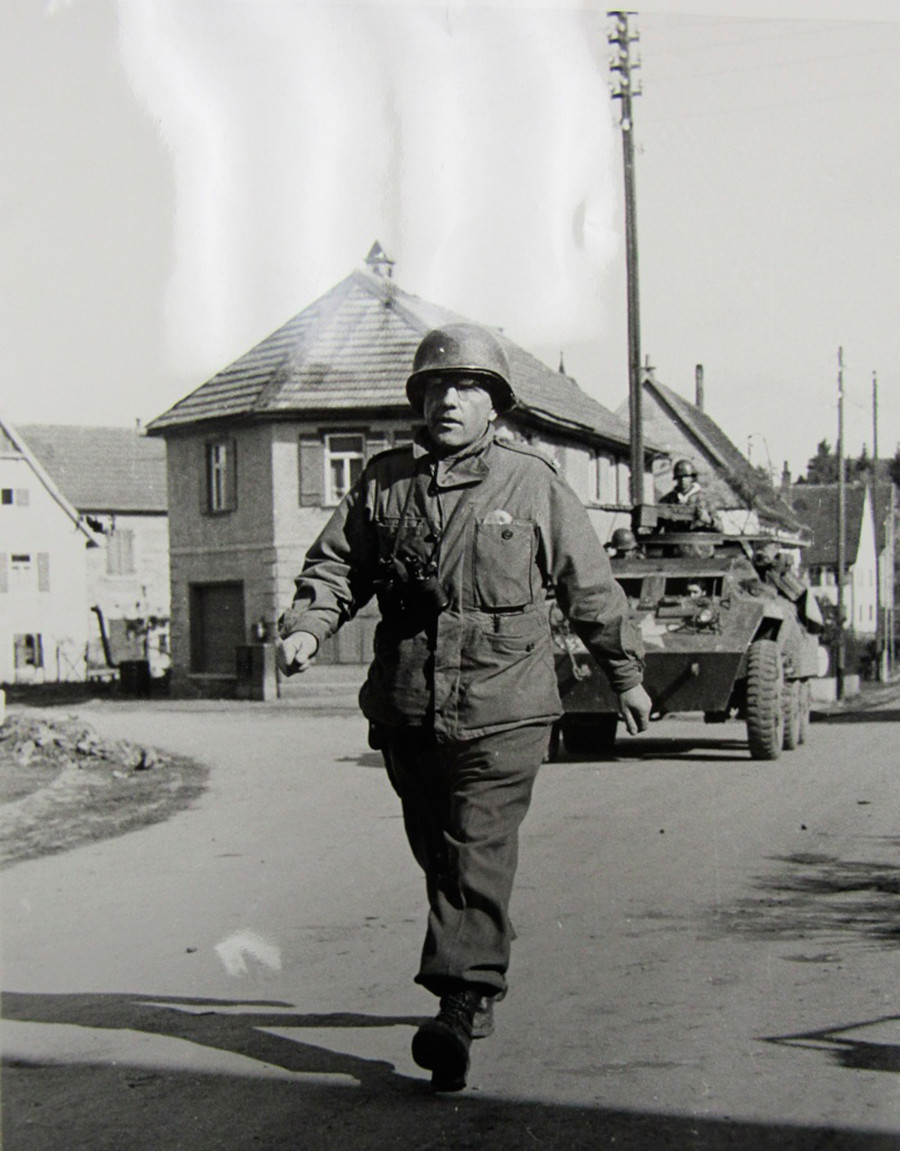 “The recently declassified documents state that Pash was obtaining vast amounts of information that the PB-7 used to undermine the pro-Soviet regimes,” Oleg Bėĭda writes. For instance, a short memo addressed to Pash by his deputy proves that in 1949 the Americans had plotted a coup attempt in Albany – with no success. The full scale of PB-7 work in Europe remains unknown to the masses: all his life, Boris Pash claimed he remembered nothing about the PB-7 program, and so did his colleagues.

He retired in 1963, spending the remaining 42 years of his life writing memoirs, travelling and – sometimes – vaguely commenting on the specifics of his work at hearings. Boris Pash died in 1995,  and although the Soviet Union dissolved in 1991, Boris Pashkovsky never managed to revisit Russia, the land of his ancestors, again.