How Soviet Russia and Poland carved up Eastern Europe 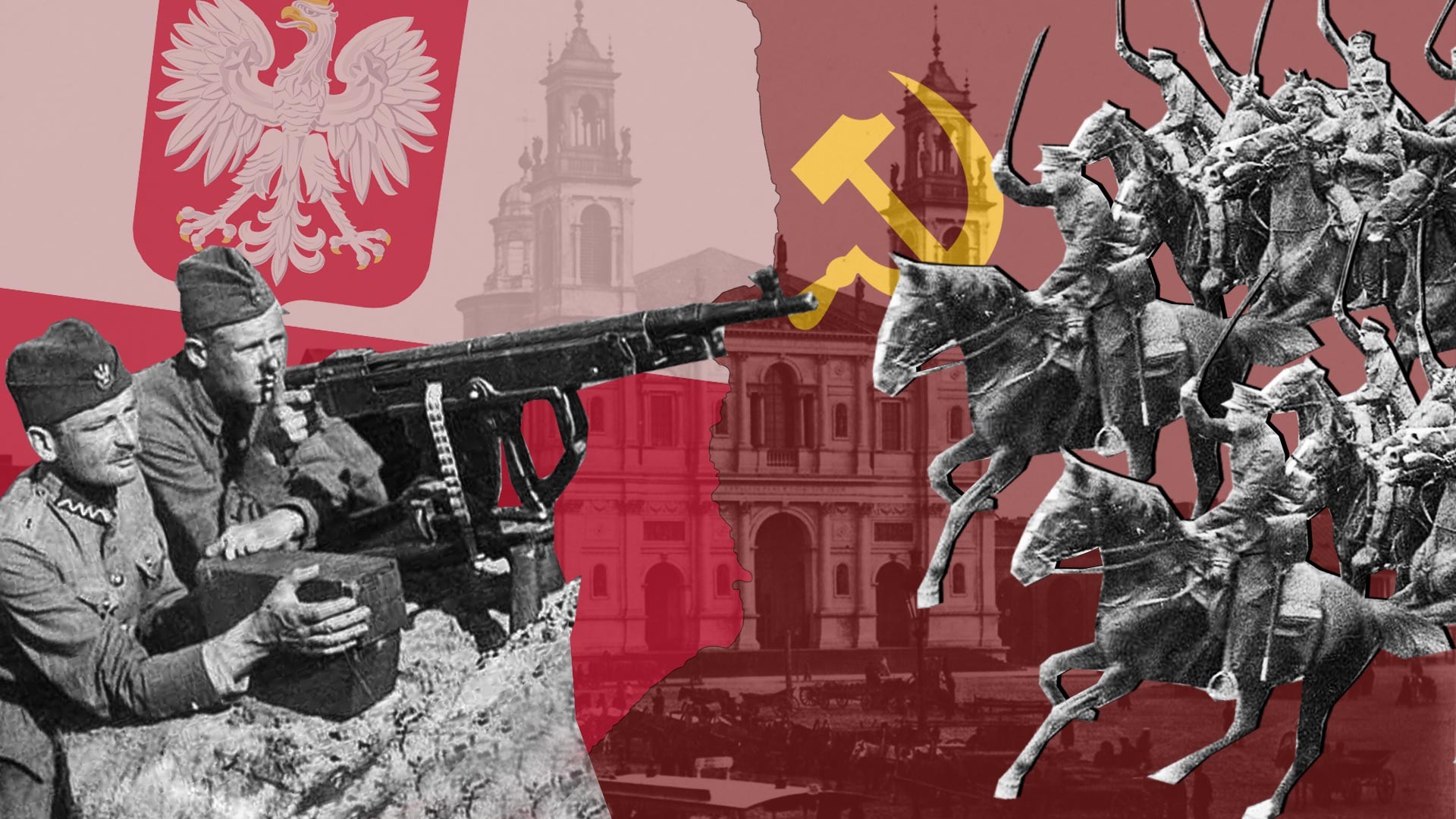 Pixabay; МАММ/МDF/russiainphoto.ru
Russia’s defeat in the Polish-Soviet War was so severe that before Hitler came to power in Germany, Poland was regarded by the Bolsheviks as their principal and most dangerous enemy.

The collapse of the Russian Empire led to the formation of a number of new states on its ruins, the largest and most powerful of which were Soviet Russia and Poland. While the goal of the Bolsheviks was to suppress all anti-government forces operating in Russia and prevent the further collapse of the country, the Poles saw their main task as gathering together the Polish national lands within the borders of 1772 (as they existed before the First Partition of Poland by the great powers). 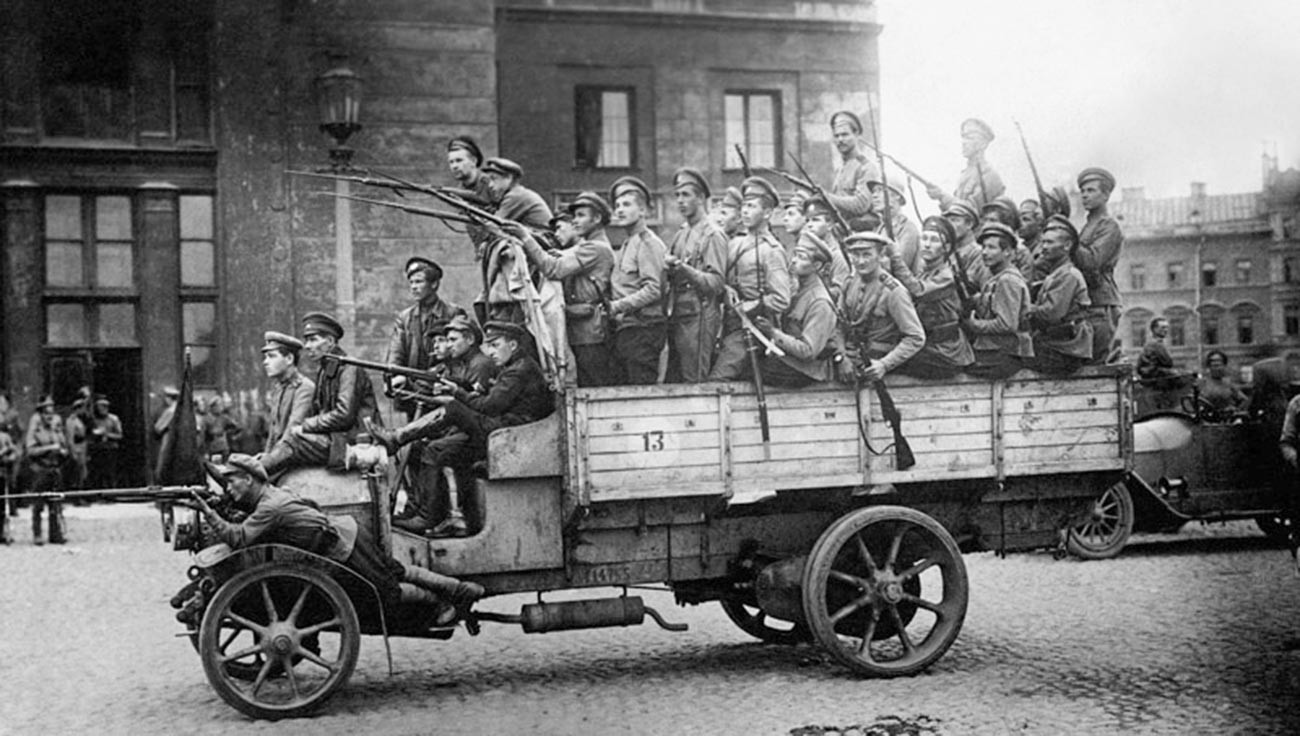 The vast lands of Ukraine, Byelorussia and the Baltic territory lay between the two centers of power and, in the wake of World War I and the withdrawal from the area of German troops, Warsaw and Moscow became embroiled in a ferocious scramble for them. 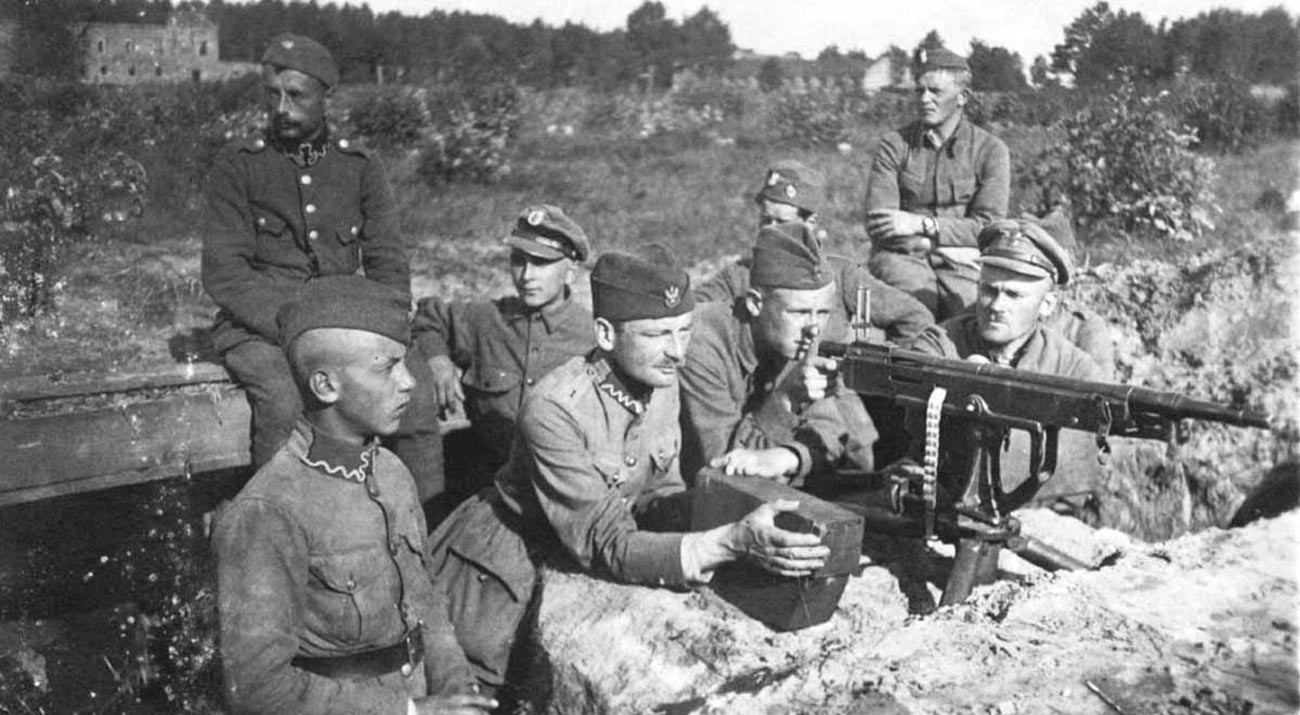 While the Bolsheviks were under strong pressure from the counter-revolutionary White Armies of Anton Denikin and Alexander Kolchak, Poland sought to take advantage of the chaos of civil war in Russia and subjugate as many of its adversary’s lands as possible. According to Polish leader Józef Piłsudski, the establishment of several small states within Russian territory, that in one way or another depended on Warsaw, would be an ideal solution. “Russia could easily become a second-rate power, unable to seriously threaten Poland’s newfound independence. For its part, Poland, as the largest and most powerful of the new states, could easily secure for itself a sphere of influence, extending from Finland to the Caucasus Mountains,” Piłsudski argued. 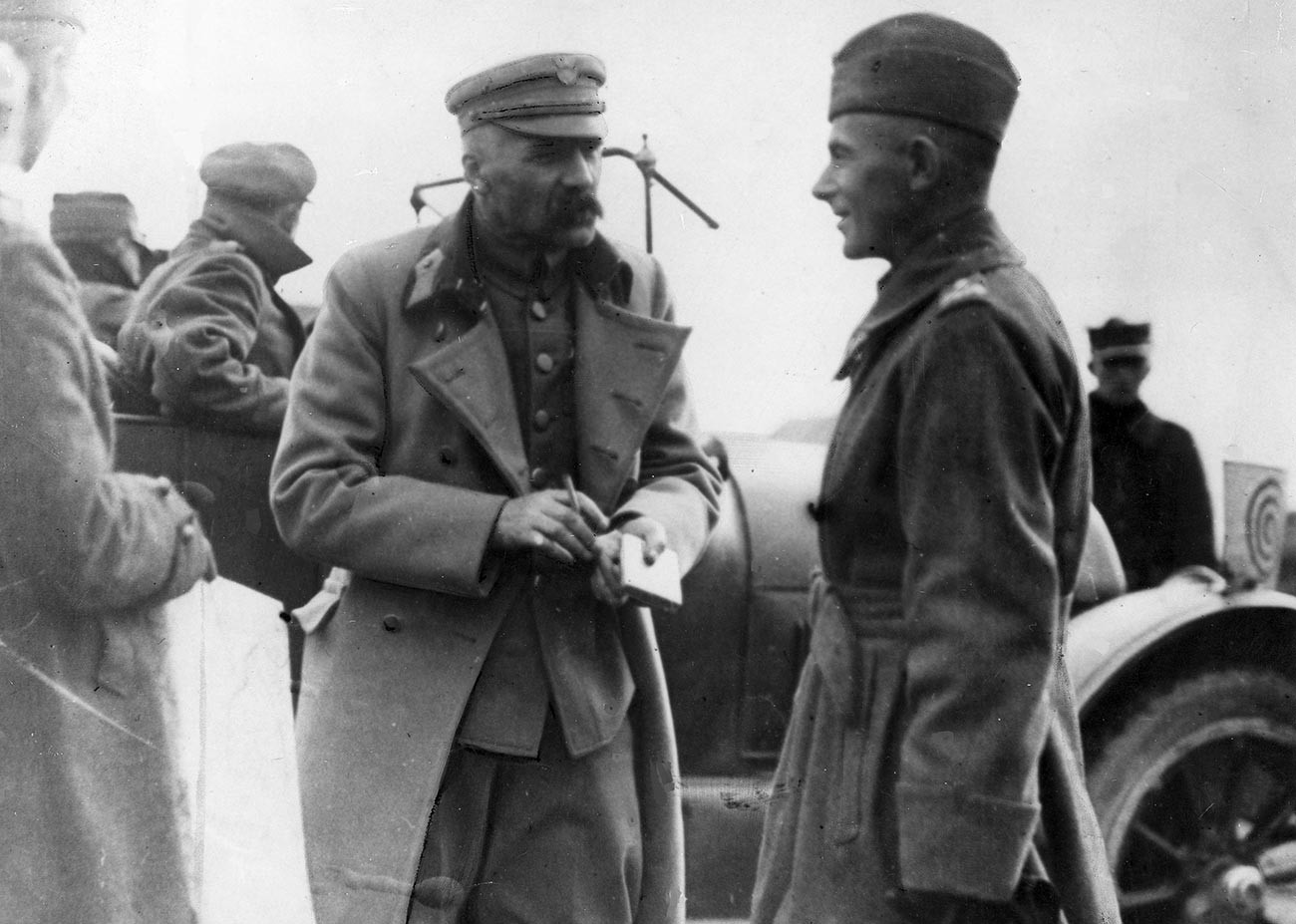 As a result of large-scale offensives in 1919 and 1920, the greater part of the territories of Byelorussia and Ukraine fell under the control of Polish forces. At the same time, a newly established Latvia and the remnants of the forces of Symon Petliura’s Ukrainian People’s Republic declared themselves as Piłsudski’s allies. The Ukrainians who sought to create their own national state regarded both Bolsheviks and Poles as enemies. However, after being pushed back by the Red Army, they decided to support Warsaw, hoping that the latter, in return for wide-ranging territorial concessions in Western Ukraine, would give them back central Ukraine, along with Kiev. For his part, Piłsudski was interested in creating a buffer state between Poland and Soviet Russia, arguing that “there can be no independent Poland without an independent Ukraine”. 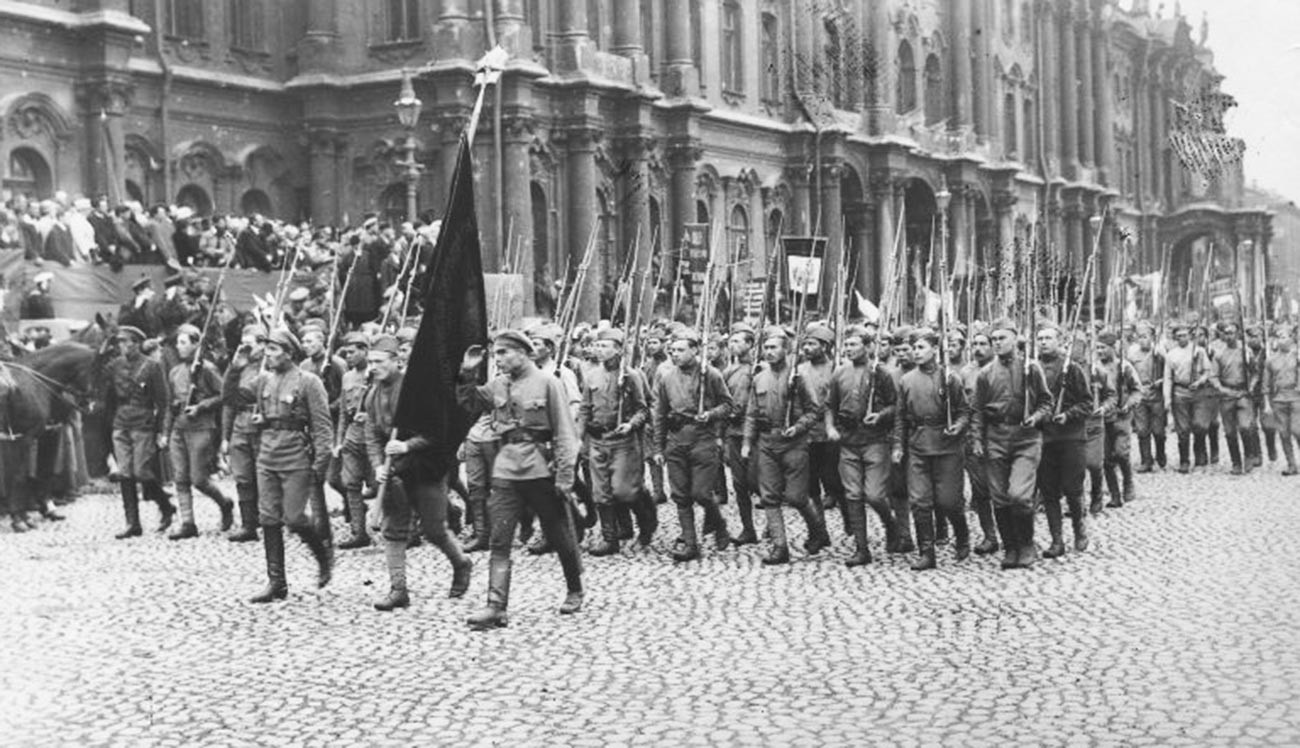 Red Army soldiers before departure to the Western Front.

On May 7, 1920, the most battle-ready Polish military unit, the 3rd Army of Edward Rydz-Śmigły, supported by Petliura units, took Kiev, something that came as a shock to the Soviet government. Having by that time routed the main forces of Denikin and Kolchak and essentially confining the remnants of the White Army troops to Crimea, the Bolsheviks concentrated all their efforts on war with Poland. Extensive reserves arrived from Siberia and the Caucasus, including the best Red Army formations - the 1st Cavalry Army of Semyon Budyonny and the 25th Chapayev Rifle Division under the command of Ivan Kutyakov. Almost the entire air force was brought to the Western Front from all over the country. 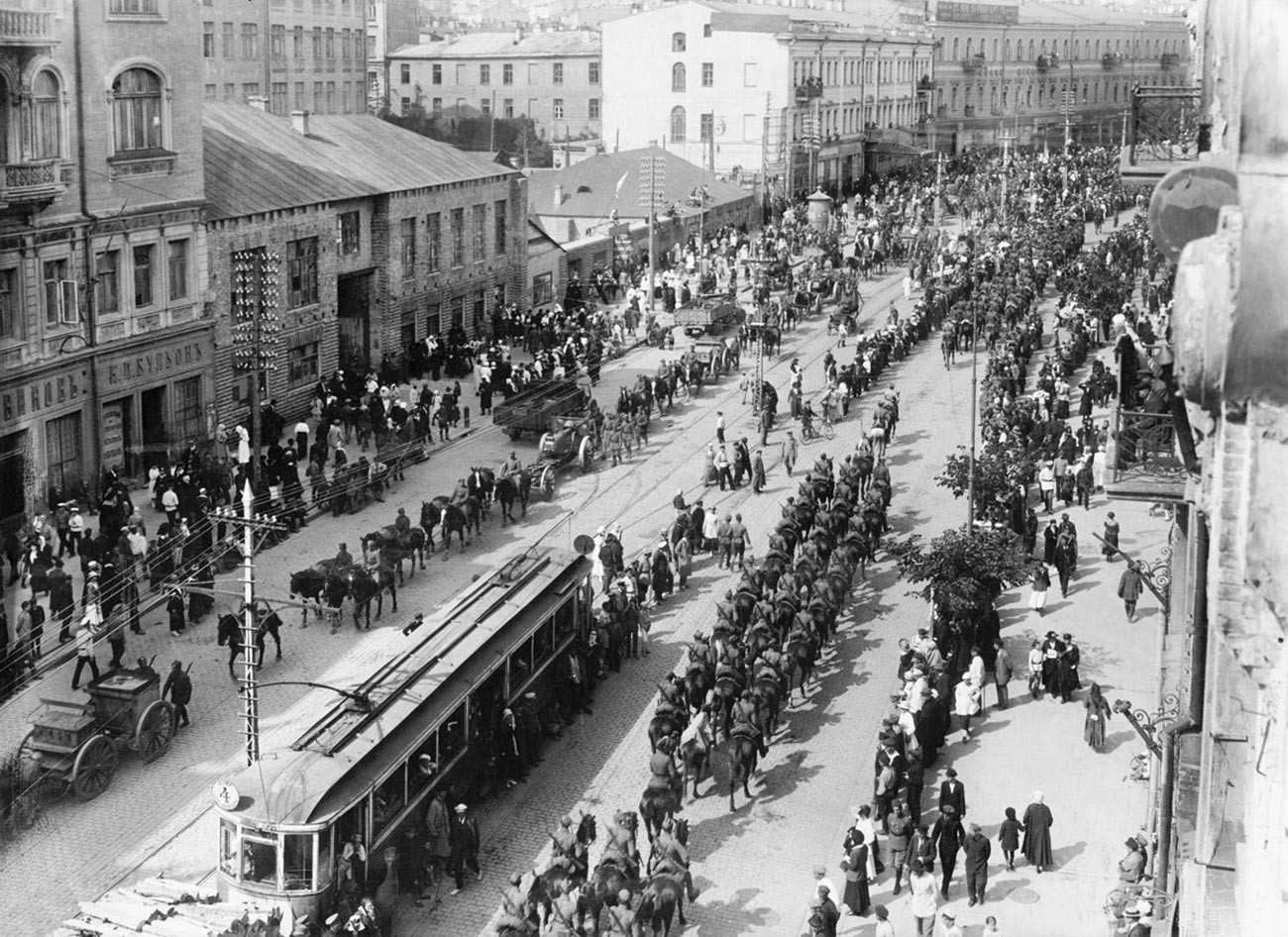 Despite the fact that a Soviet offensive in Byelorussia had stalled, the strike in the south was an astounding success. By June 12, Kiev had been liberated and the Polish troops rapidly began to roll back westwards. Once again, the leaders of Soviet Russia discerned a glimmer of hope that their somewhat forgotten dream of world revolution could be resurrected. “Over the corpse of White Poland lies the road to worldwide conflagration. On bayonets we will bring happiness and peace to the toiling masses of mankind,” read Order No. 1423 of July 2, 1920. 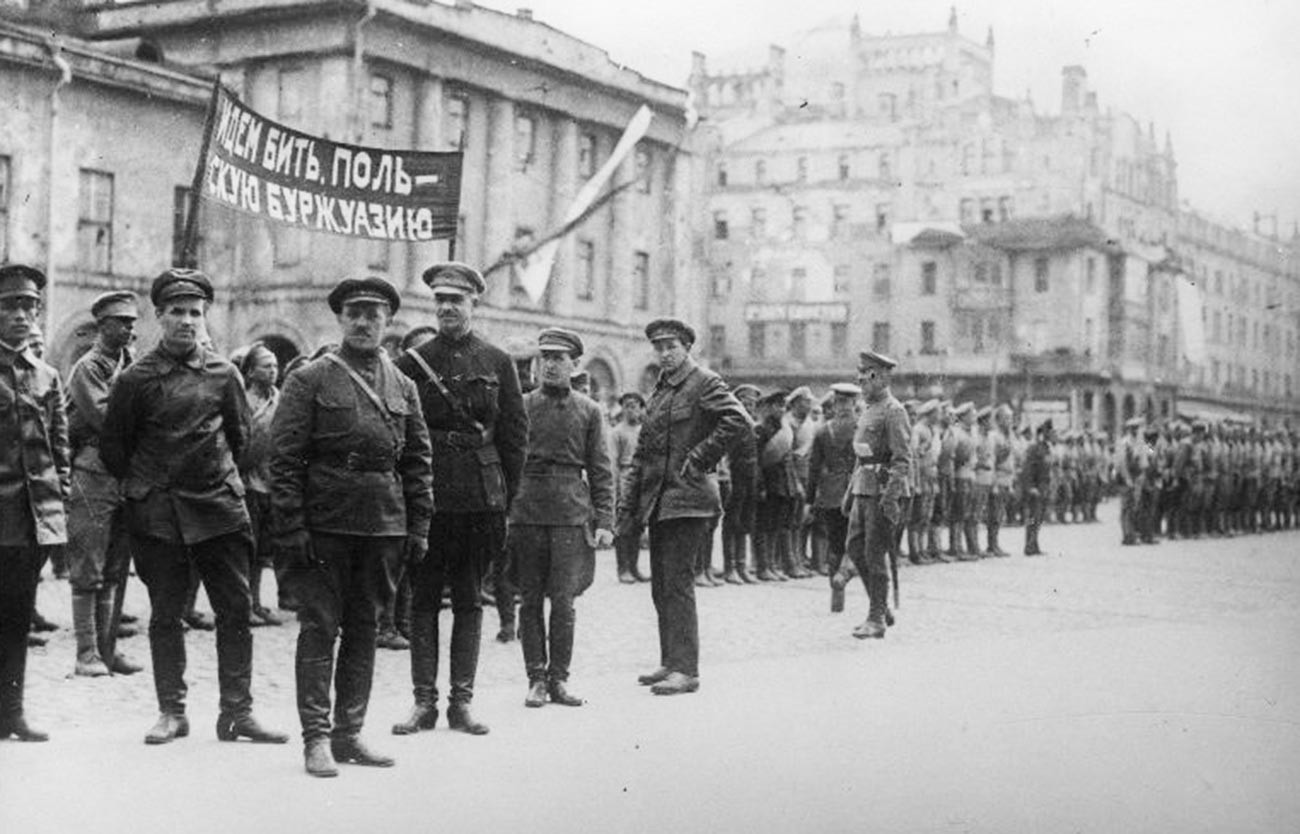 Red Army soldiers before departure to the Western Front.

Staring disaster in the face, Poland asked the Entente powers for mediation. The allies proposed that the Russian-Polish border should be established along the ‘Curzon Line’, named after the architect of the idea, British Foreign Secretary George Nathaniel Curzon. Passing from Grodno in Byelorussia, through Brest-Litovsk (the location of the famous fortress) and Lvov to the Carpathians, it was essentially supposed to separate the areas of Polish population from areas of non-Polish population (Ukrainian, Belarusian and Lithuanian). Riding a wave of success, however, the Bolsheviks turned down the plan. 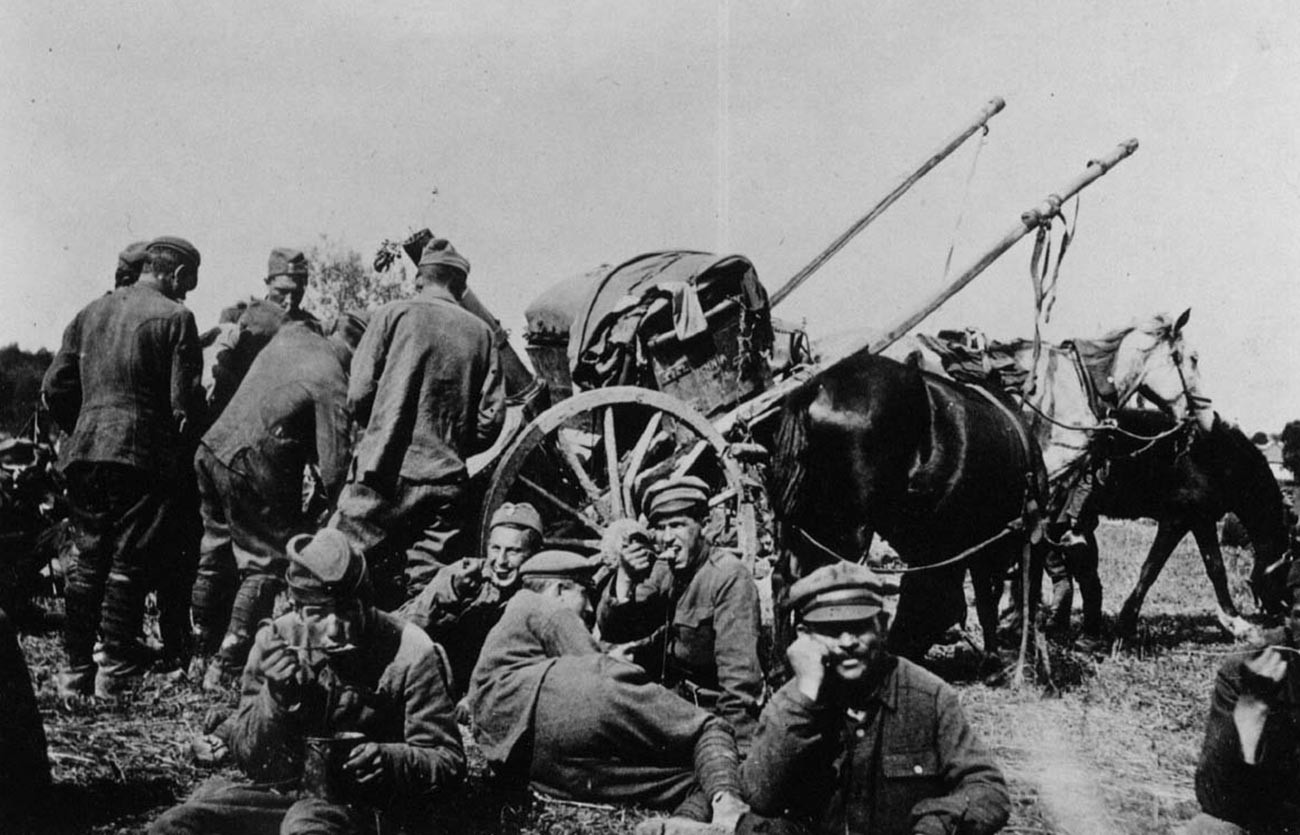 Polish troops during the defense of Warsaw.

On August 13, 1920, the troops of the Western Front, under the command of Mikhail Tukhachevsky, began their advance on Warsaw. At the same time, the 1st Cavalry Army and units of Alexander Egorov’s Southwestern Front were engaged in battles for Lvov. As Winston Churchill wrote in his book ‘The World Crisis: The Aftermath’: “Poland seemed to have escaped from her hundred and fifty years’ partition among three military Empires to fall beneath the yoke of Communism.” 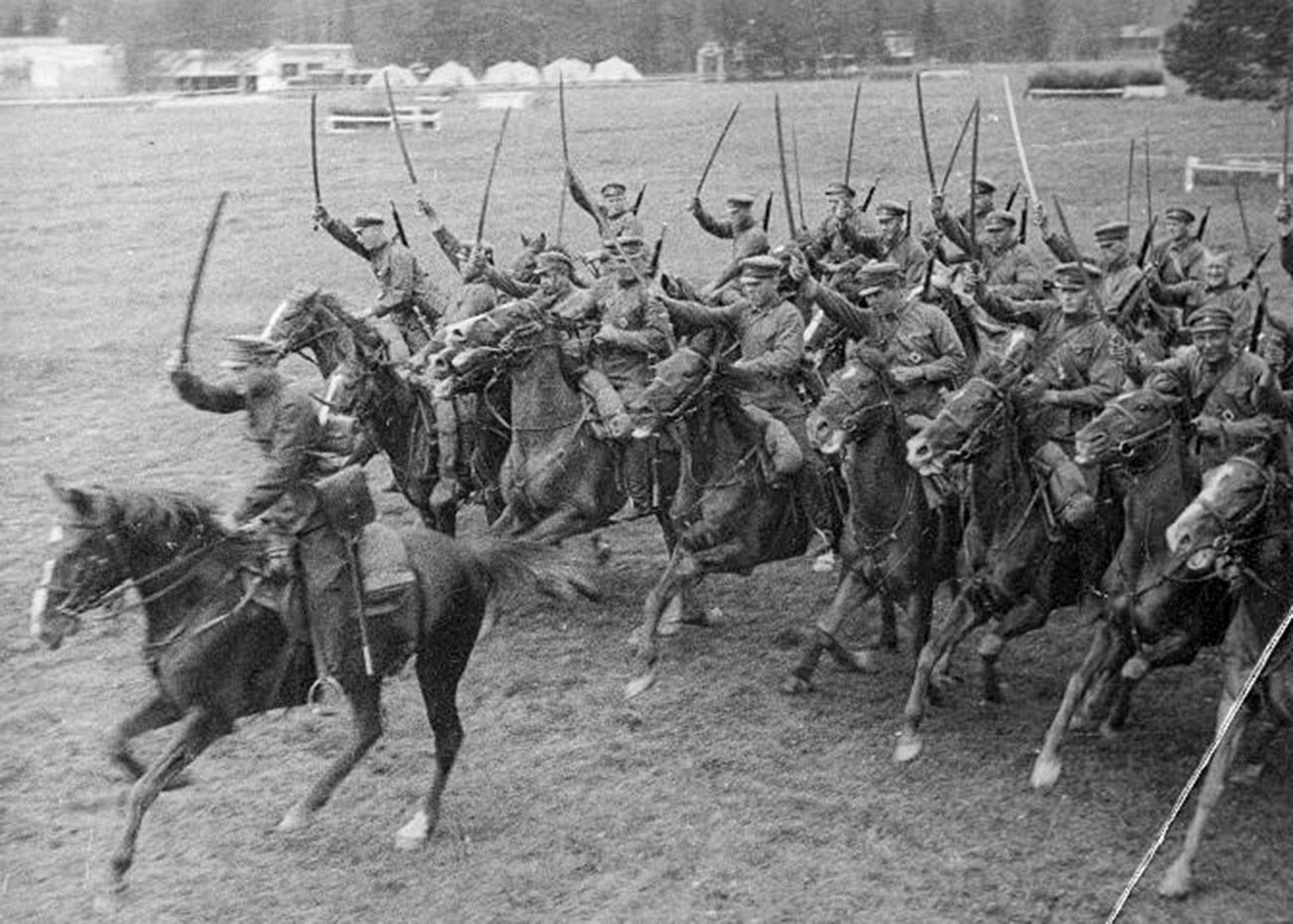 It is interesting that a large number of White Army officers who were fighting the Red Army in Crimea at that time raised toasts for the victory of Russian arms against Poland and gave voice to their wish for the Polish capital to be taken rapidly. Politician Nikanor Savich, who was with Pyotr Wrangel, commander of White Guard forces on the peninsula, wrote: “The fact is that we also felt somewhat uncomfortable to be engaged in fighting against the Bolsheviks during the war with Poland. On the one hand, everyone celebrated when we struck a blow against the Bolsheviks, but at the same time, it was feared that a Polish victory would not bring Russia liberation, that it would have to be paid for not by the Bolsheviks, but by the Russian people…” 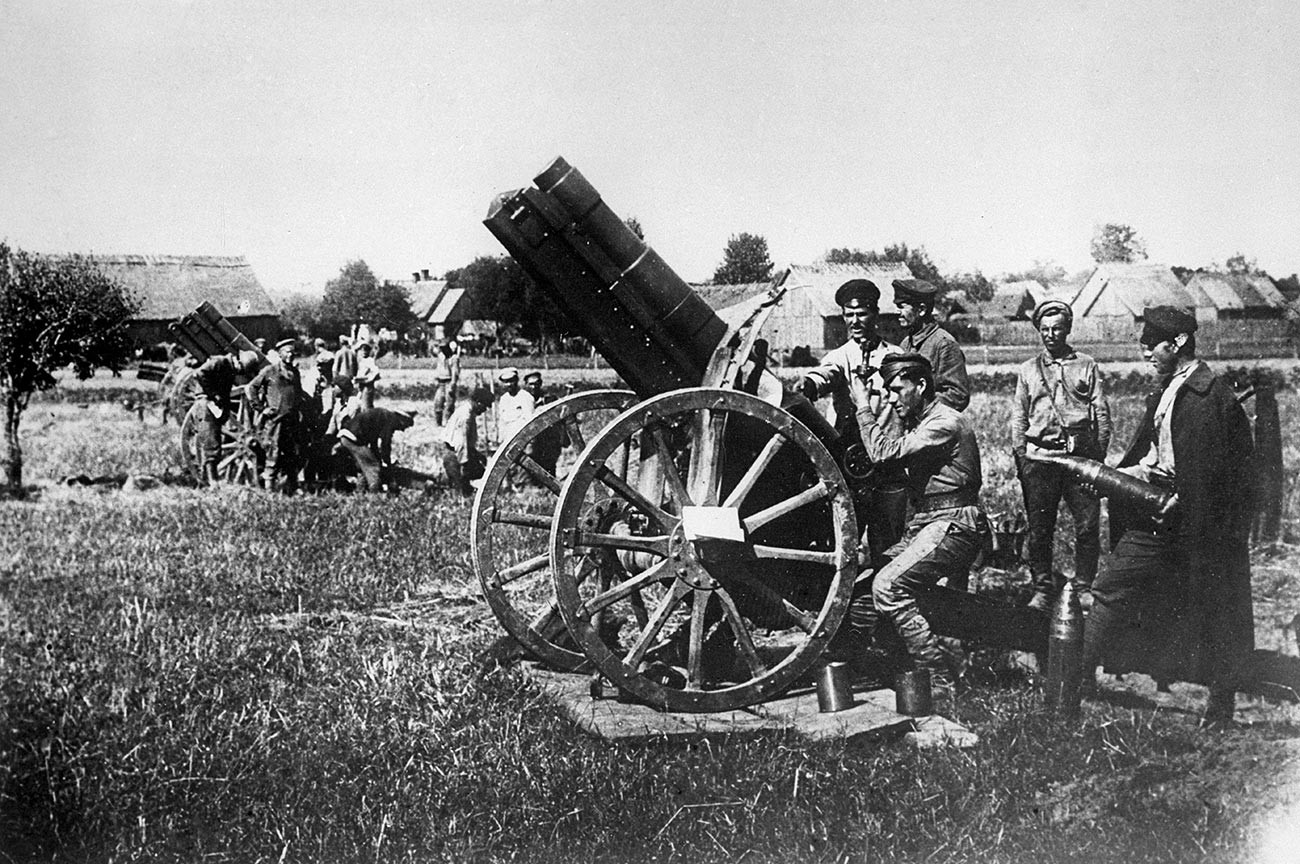 The call that rang out in the Red Army was: “Forward, heroes! To Warsaw!” In reality, however, the situation was not all that encouraging. The exhausted troops were advancing at the limit of their strength, the rear was hopelessly lagging, and there was a shortage of reserves and munitions. Appeals for caution by a number of commanders and proposals to delay the assault and turn the soldiers away from the city were ignored. The Polish army, on the other hand, was getting reinforcements from other parts of the country. The advance of the enemy led to an upsurge of patriotic feeling and active mobilization of the population for the struggle against the Bolsheviks. What is more, following Soviet Russia’s rejection of the Curzon plan, the Entente had dispatched military supplies to the Poles, including around 600 pieces of artillery. 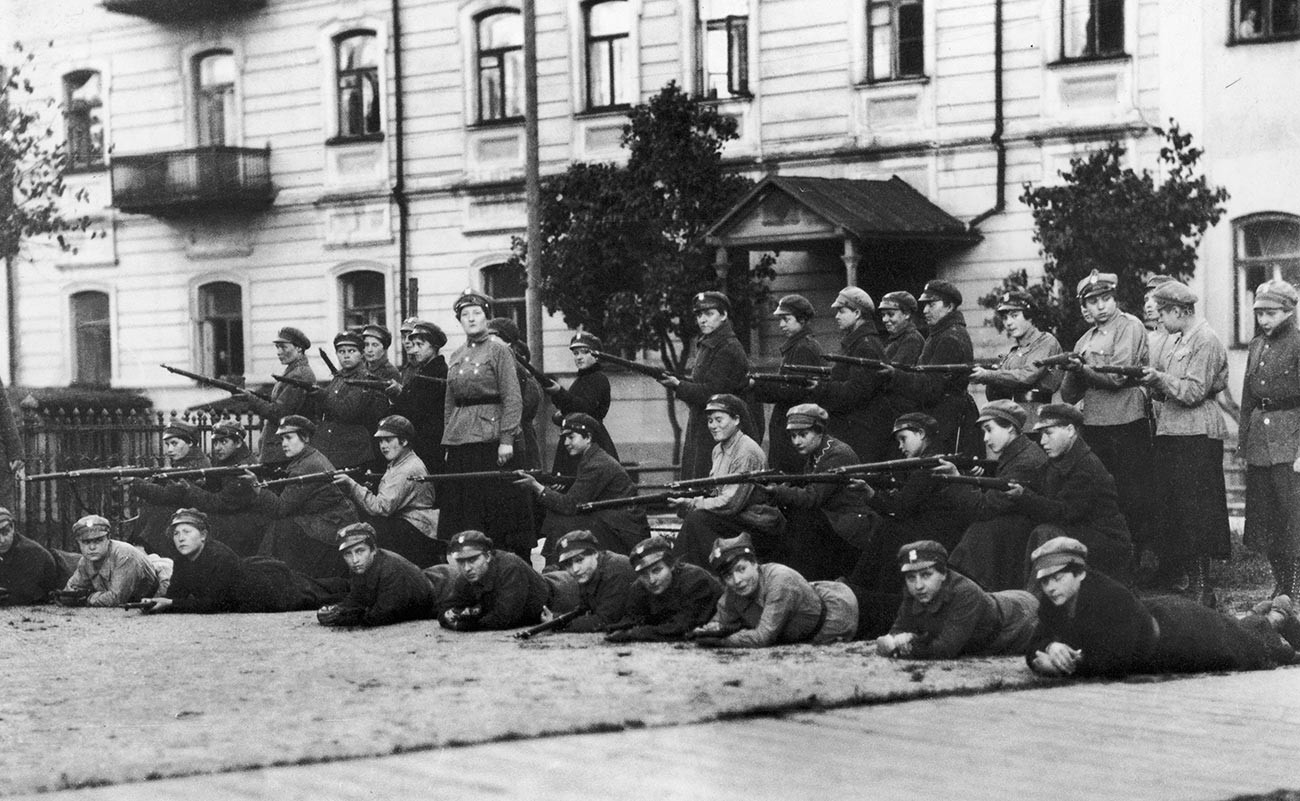 Polish women soldiers in combat during the Soviet-Polish war.

By August  16, units of the Polish army under Piłsudski’s command had counterattacked, and, breaking through the Soviet front, threatened to surround and annihilate Tukhachevsky’s troops. As a result of the Battle of Warsaw, which is known in Poland as the ‘Miracle on the Vistula’, 25,000 Red Army soldiers were killed (with the Poles losing around 5,000 and 10,000 deemed missing) and 60,000 taken prisoner. In addition, around 45,000 were cut off from the main forces and hemmed in in the direction of East Prussia. On crossing the border, they were interned by the Germans. Leon Trotsky described the battle as “one of the greatest catastrophes we ever suffered on our military fronts”.

The 1st Cavalry Army was only sent to Warsaw on August 20, after the Western front had been smashed, and it came too late to save the day. Pursued by the Poles, the Soviet troops began a wholesale retreat, and on October 12, the Polish army occupied Minsk once again. Neither country had the strength to continue the war and the sides soon sat down at the negotiating table. But now it was the Poles who refused to accept the Curzon Line. 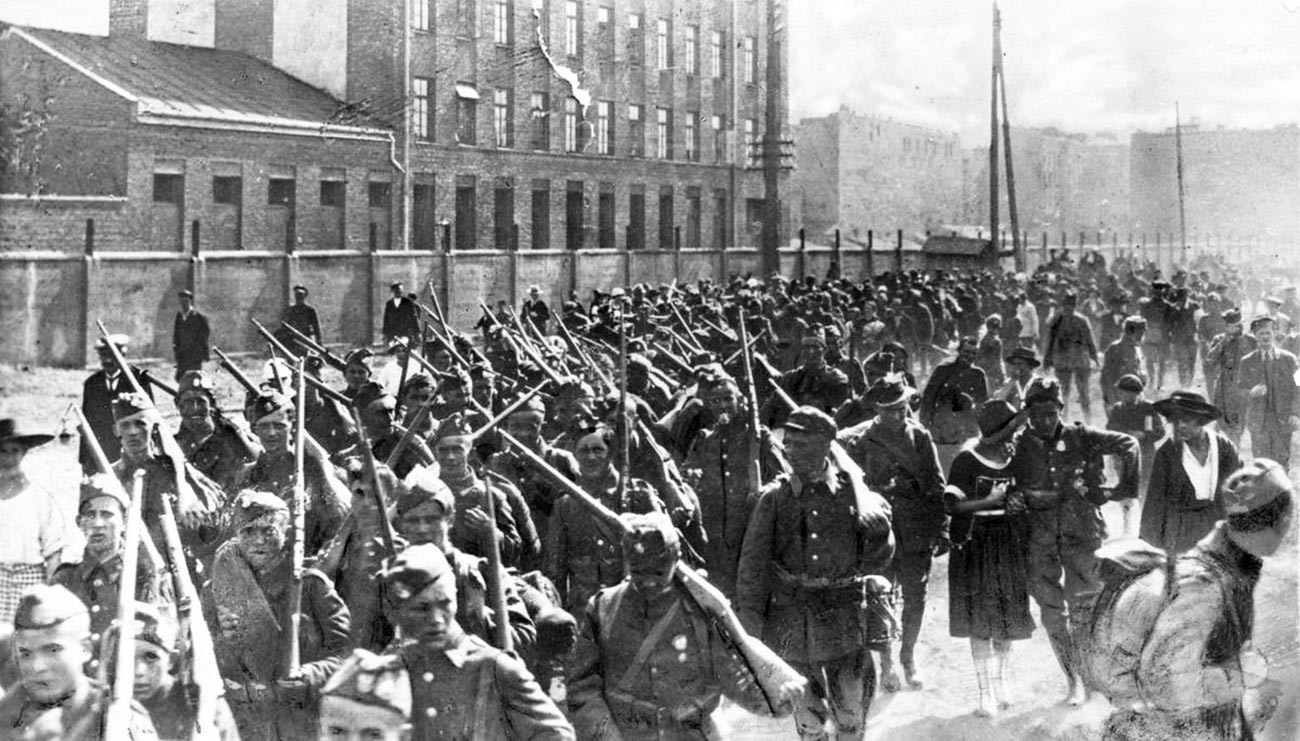 Infantry of the Polish Army during the Battle of Warsaw.

As a result of the Peace of Riga signed on March 18, 1921, Poland acquired extensive territories in Western Ukraine and Western Byelorussia along with the non-Polish populations living there. Unfortunately for Warsaw, the revival of Poland’s great power status did not last long. The leadership of Soviet Russia (which became the Soviet Union from 1922) did not accept this state of affairs and, less than 20 years later, took back these lands when it carved up Poland with Nazi Germany. 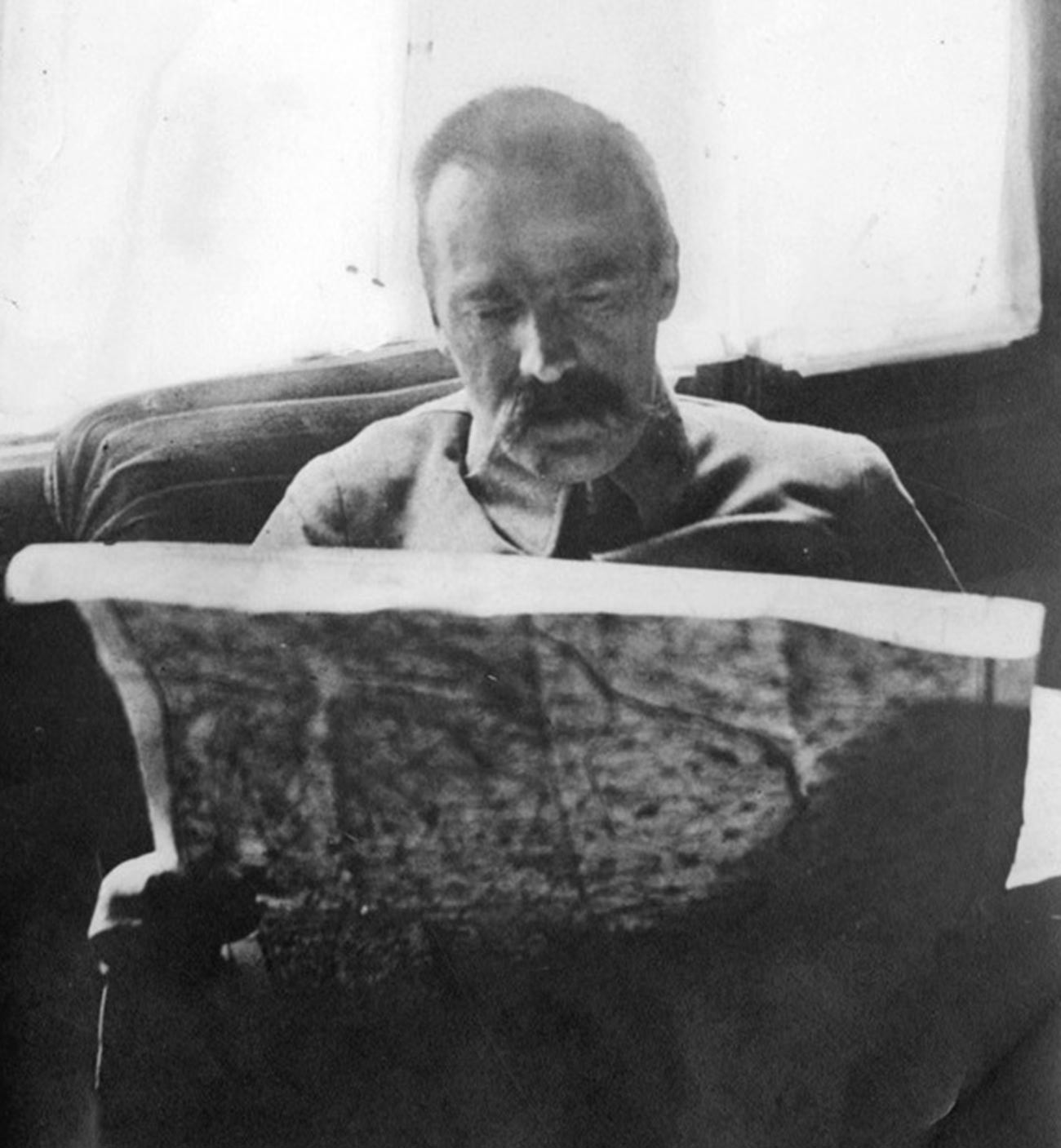