20 posters from the war that saved the world from Communism 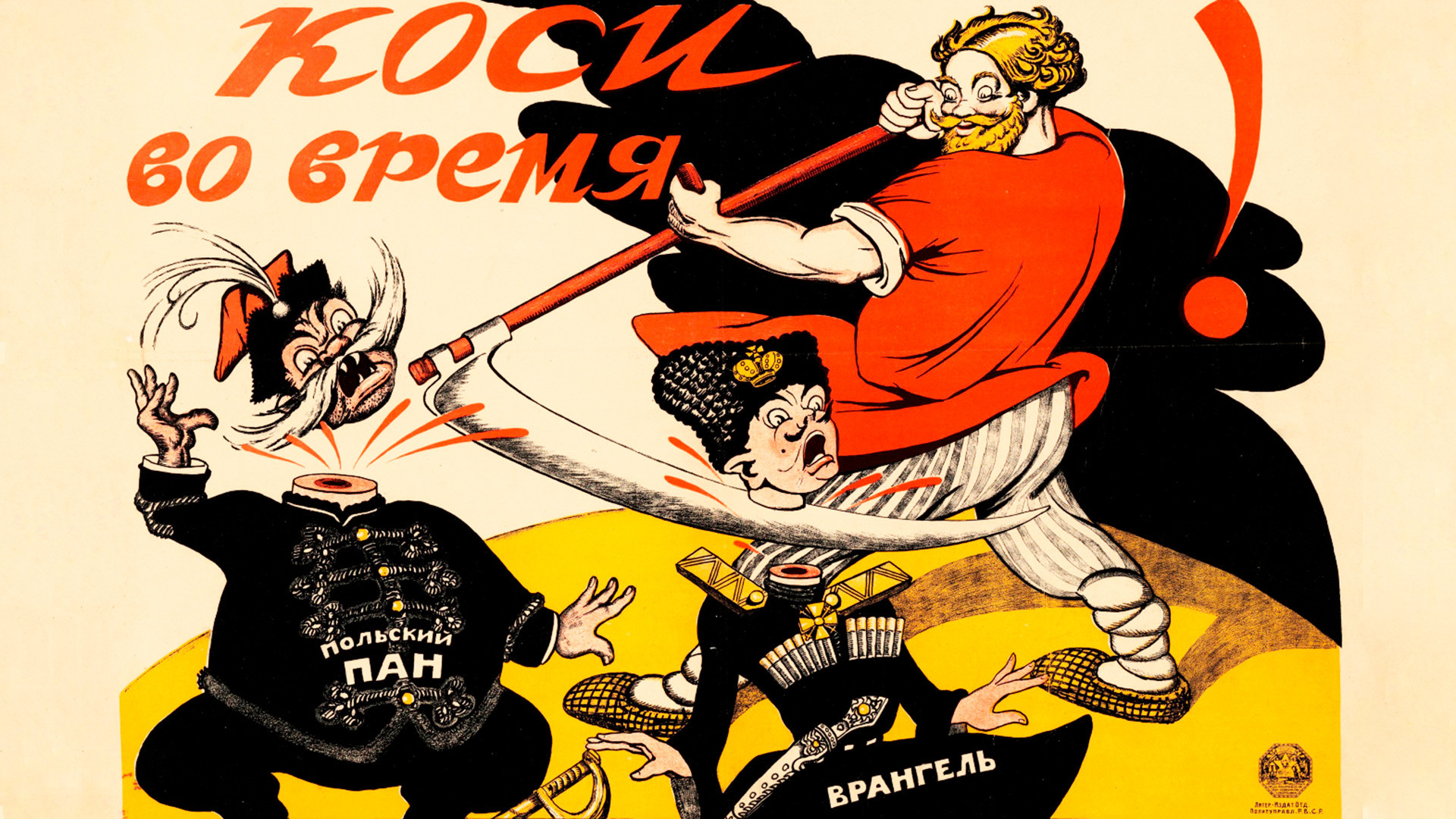 Deni (Denisov) V.N., 1920
The 1917 Revolution in Russia was considered by the Bolsheviks as just the first step in kindling the anticipated World Revolution and spreading Communism around the globe. However, major defeat in the war against Poland in 1921 completely buried these ambitious plans.

The collapse of three major empires (German, Russian and Austro-Hungarian) after WWI pushed Europe into the chaos of border conflicts and repartition of territories between the newly formed states. In 1919, two such “newborns” - Soviet Russia and Poland - fought a war for dominance in Eastern Europe.

While Russia was being torn apart by the Civil War, the Poles took the opportunity to restore its great past - the Polish Golden Age (15-16th centuries), when the country possessed vast territories in modern-day Belarus, Ukraine and Lithuania with borders extending from the Baltic to the Black Sea.

As for the Soviet leadership, they soon realized that war with the Poles would provide a chance to ignite the flame of revolution in Europe. After the Sovietization of Poland, they would gain direct access to the restless and rebellious German and Hungarian proletariat, and then nothing would stop the spread of Communism across the world.

However, these plans collapsed when the Soviet troops were defeated near Warsaw in 1920. This victory, known in Poland as the “Miracle on the Vistula,” effectively ended the World Revolution drive. Soviet leaders officially rejected the idea in the late 1920s, proclaiming instead the theory of building “Socialism in One Country” and abandoning open support for revolutions in other countries. 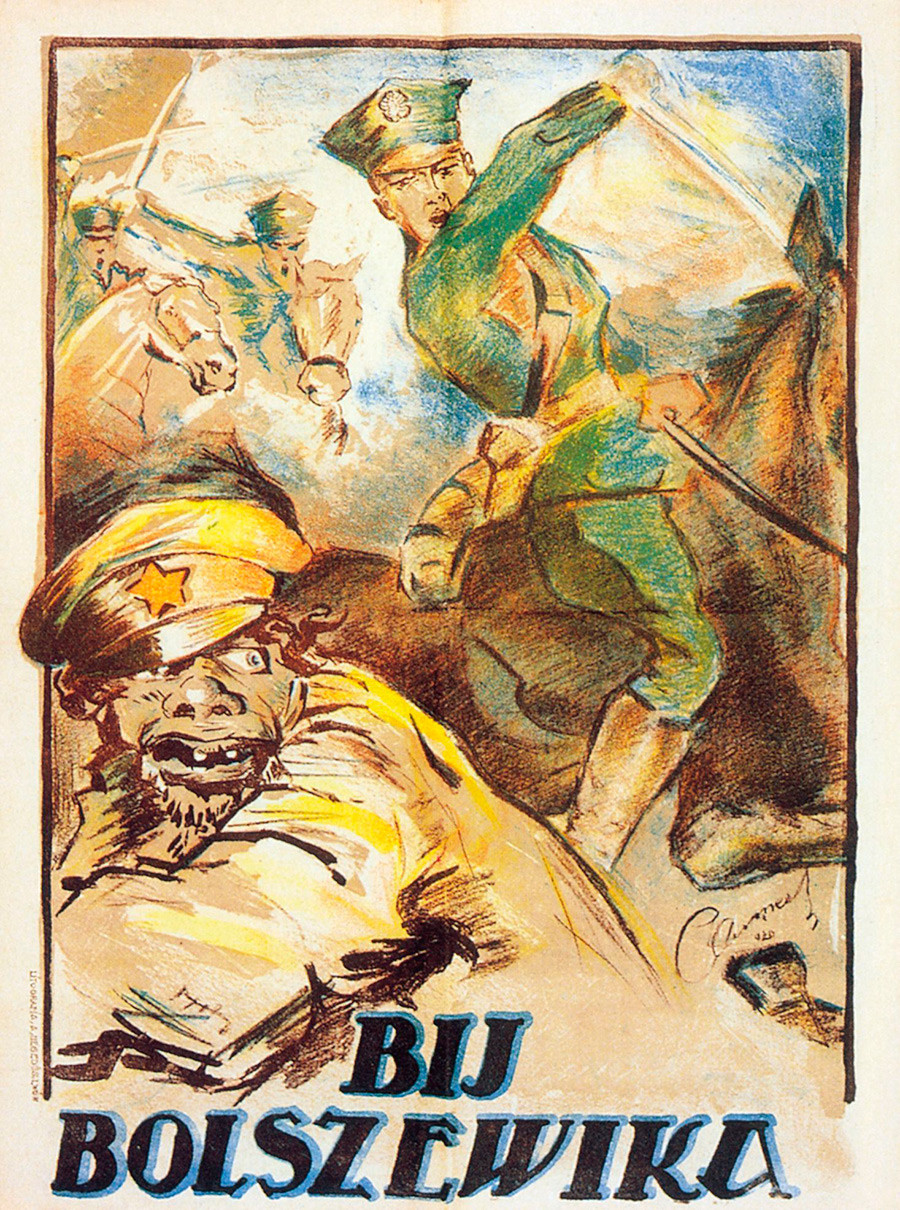 2. "Hurry, give a sound thrashing to the Pan (Polish lord). Don't forget about the Baron, too.” The “Baron” in question is General Pyotr Wrangel, who in 1920 commanded the remains of the White anti-Bolshevik forces, taking a final stand in Crimea. 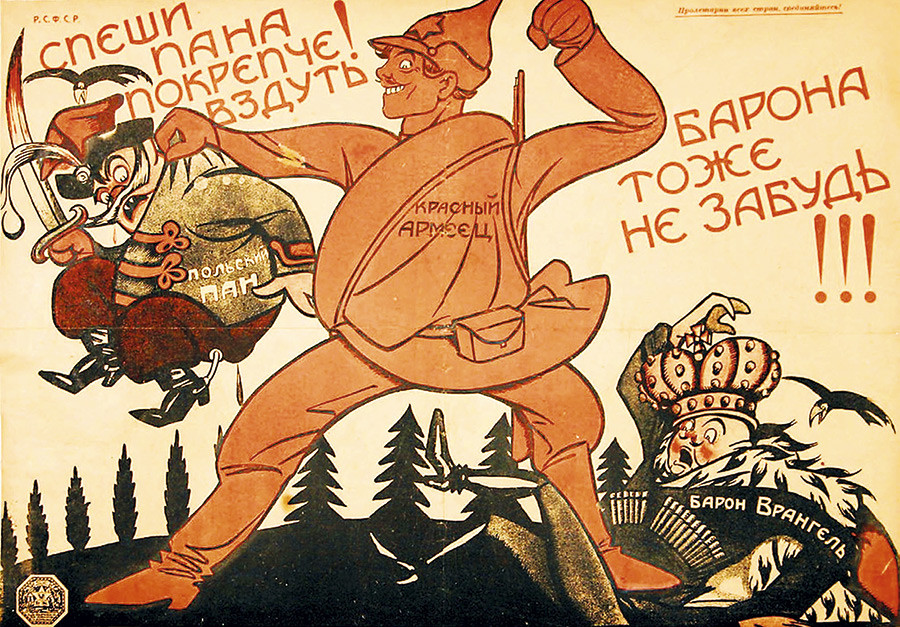 3. “Help! Everything for the front! Everyone to the front!” 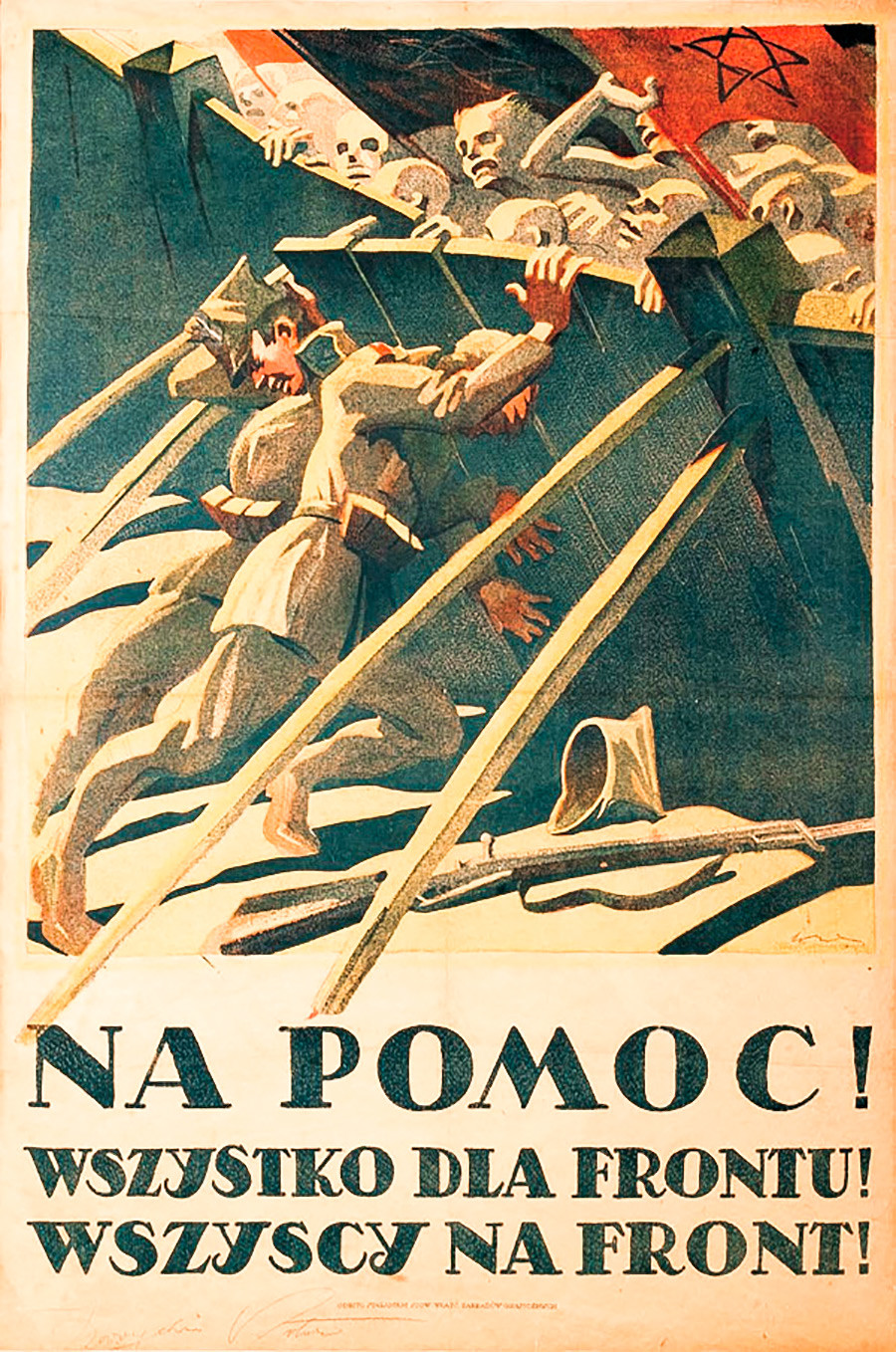 4. “Peasant! The Polish landowner wants to enslave you. It will never happen!” 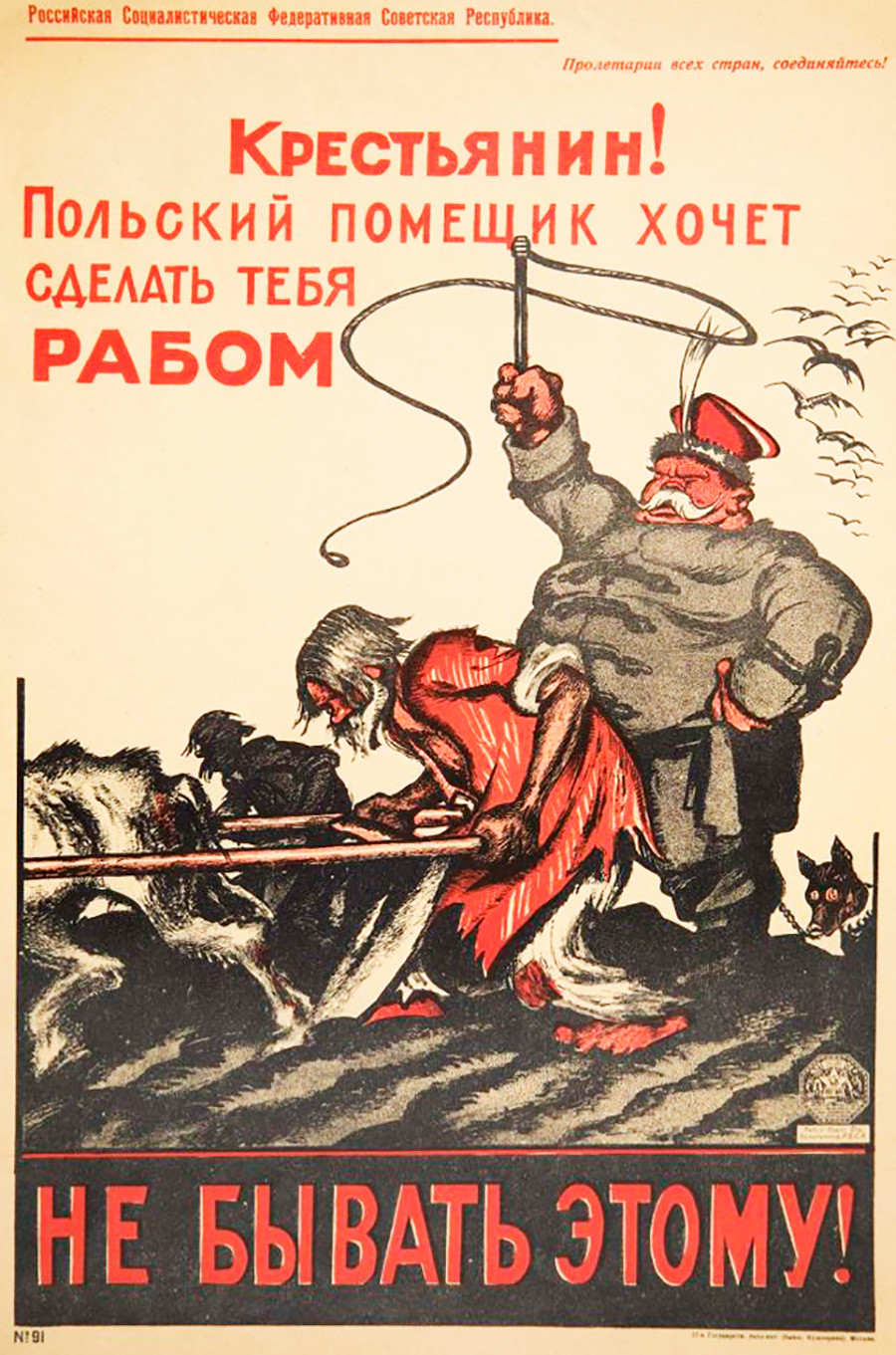 5. ‘Do you want this to happen to your women and girls? Protect them from Bolshevism with all your might!” 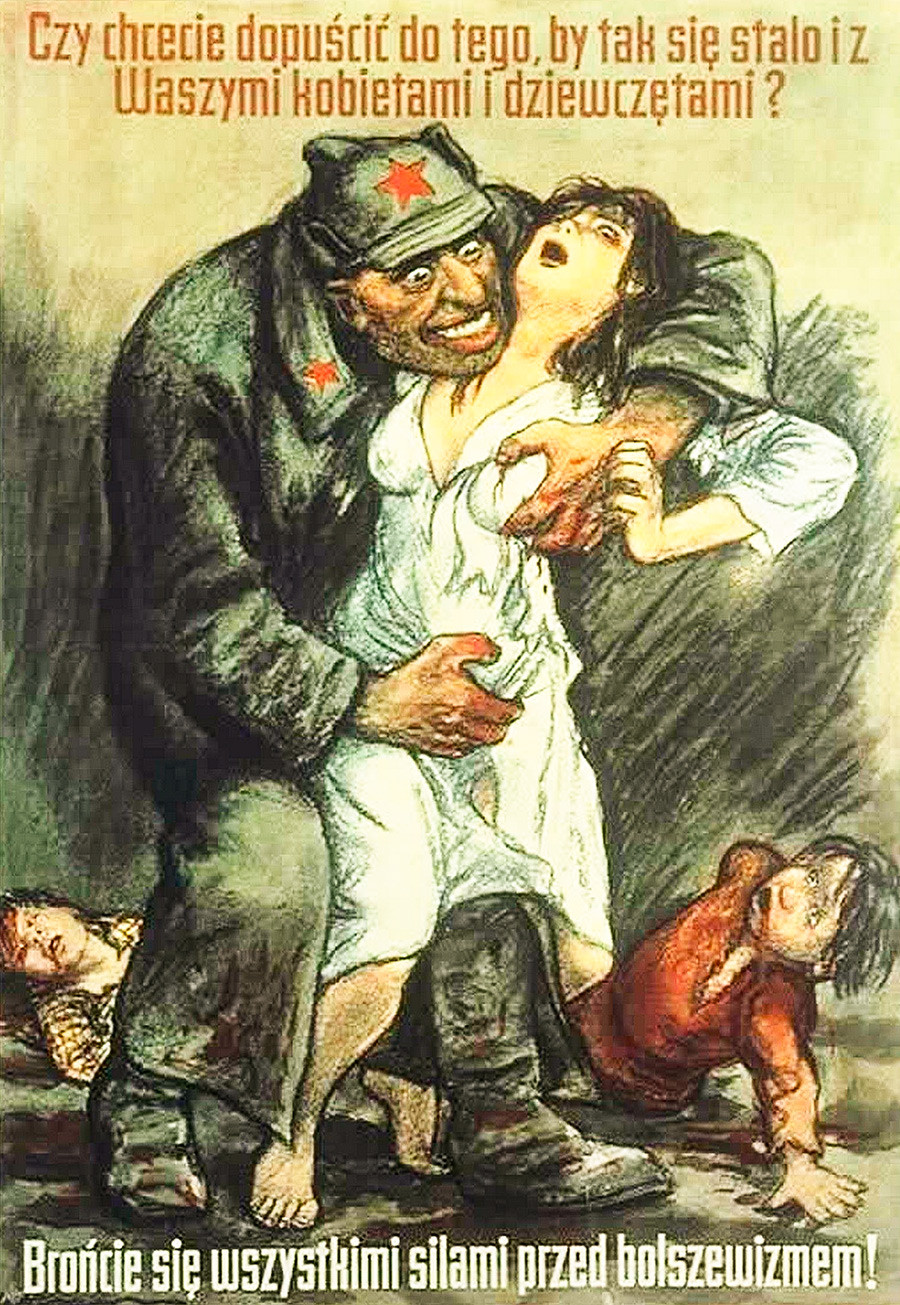 6. The poster shows France holding “Her Ladyship Poland”: “A pig trained in Paris.” 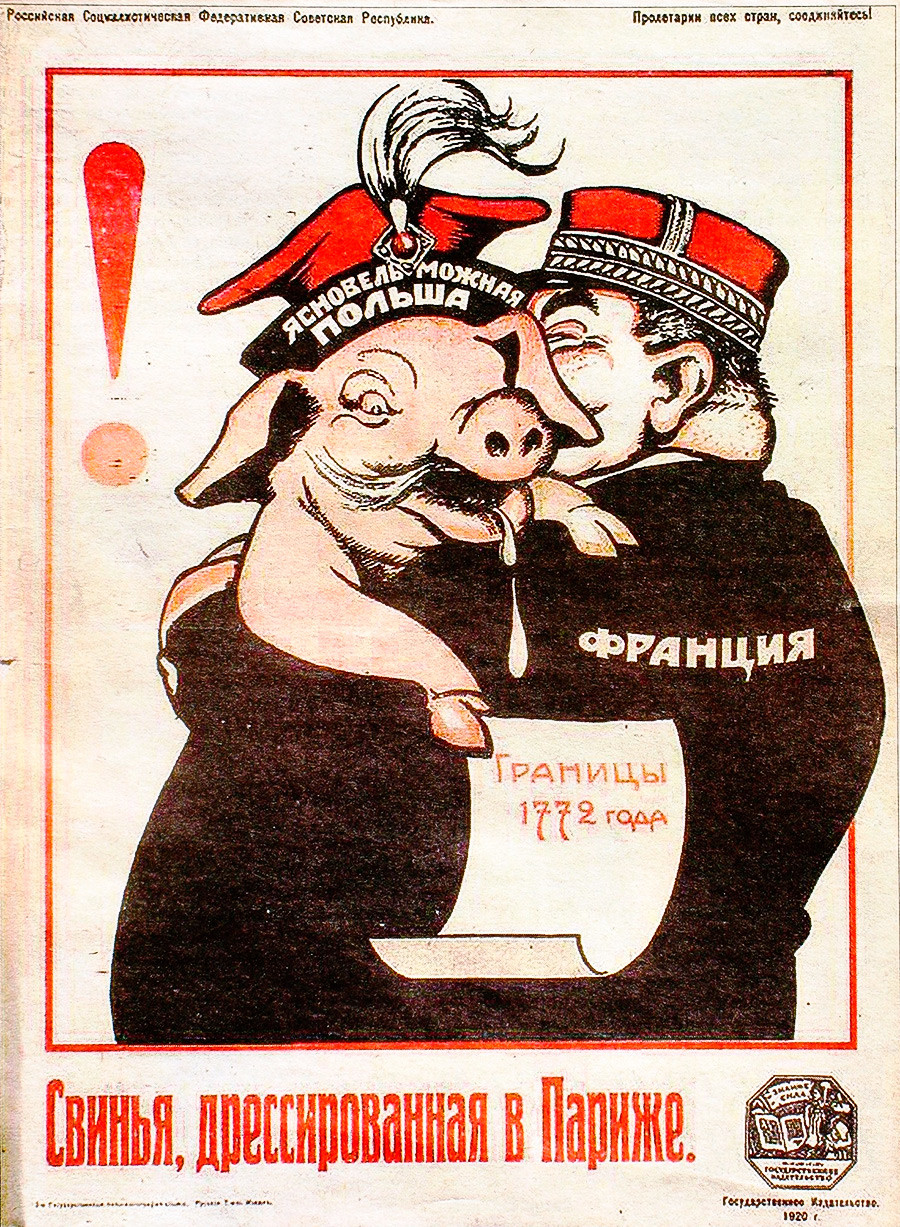 7. “Only the army will defend the country and the nation.” 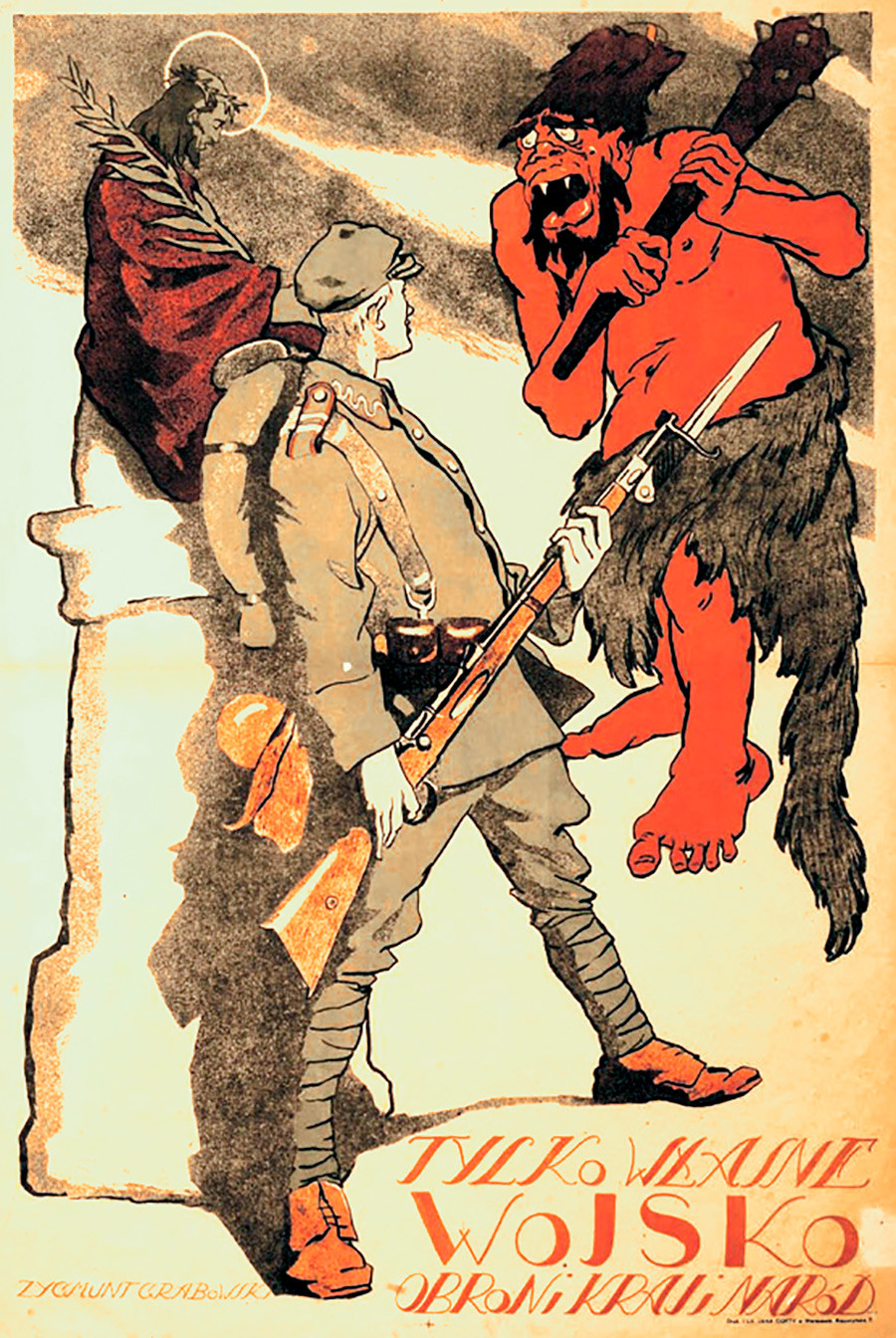 8. A peasant decapitating the Pan and Wrangel: “Reap before it’s too late!” 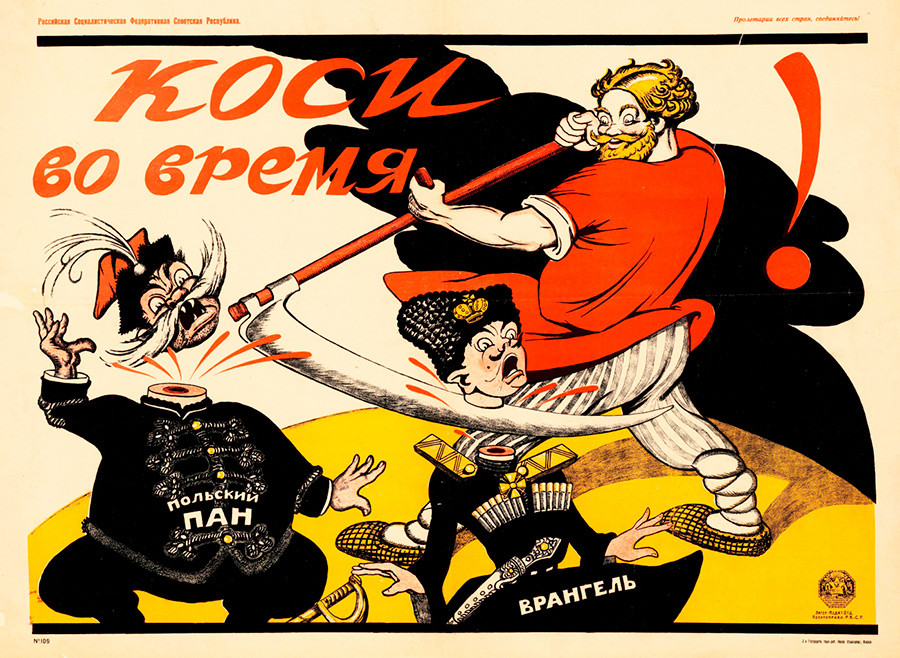 9. “The Bolshevik monster brings murder, conflagration, and destruction to Poland. Those who want to ensure peace for the Homeland, join the troops immediately!” 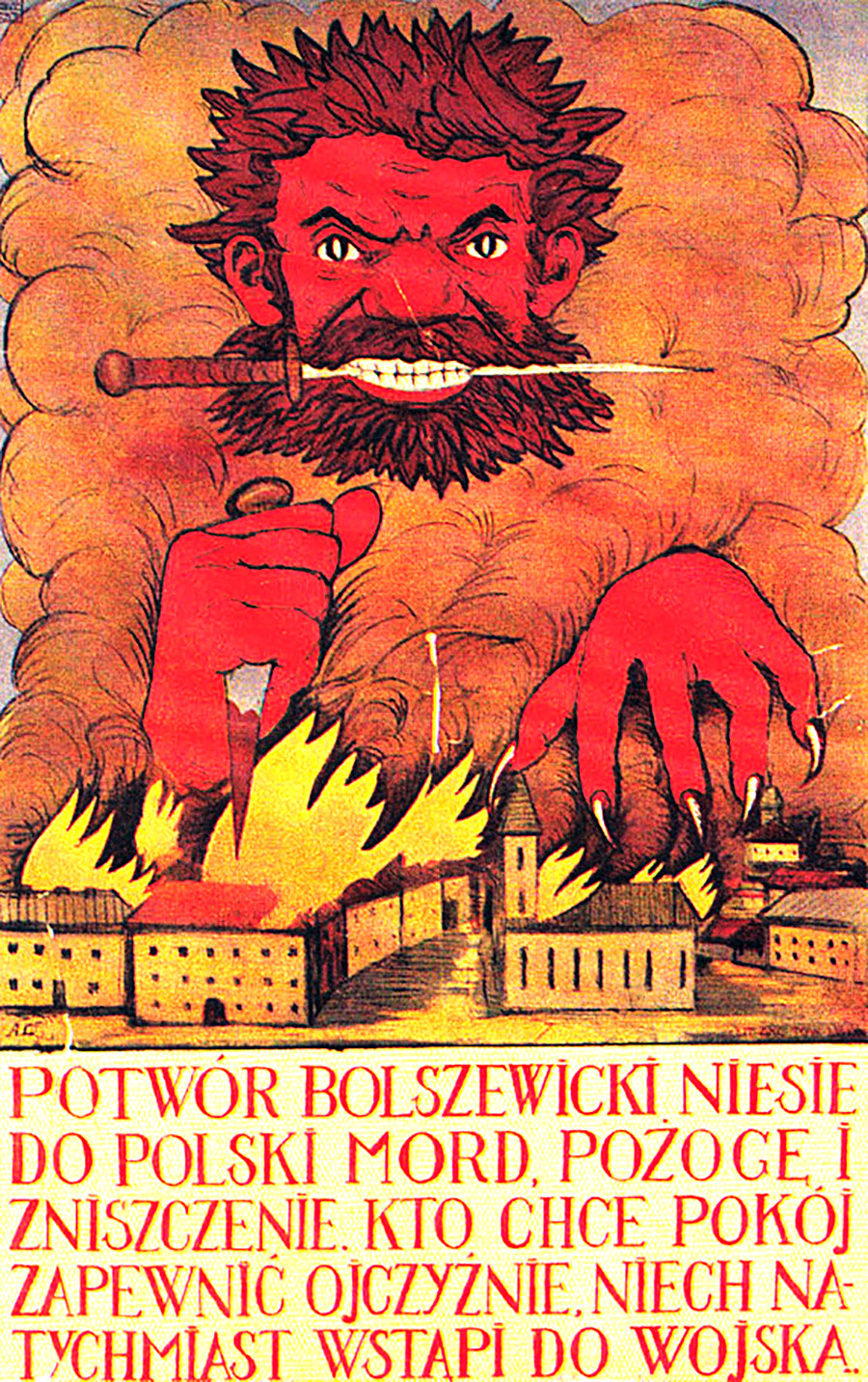 10. “Each strike of the hammer is a strike at the enemy!” 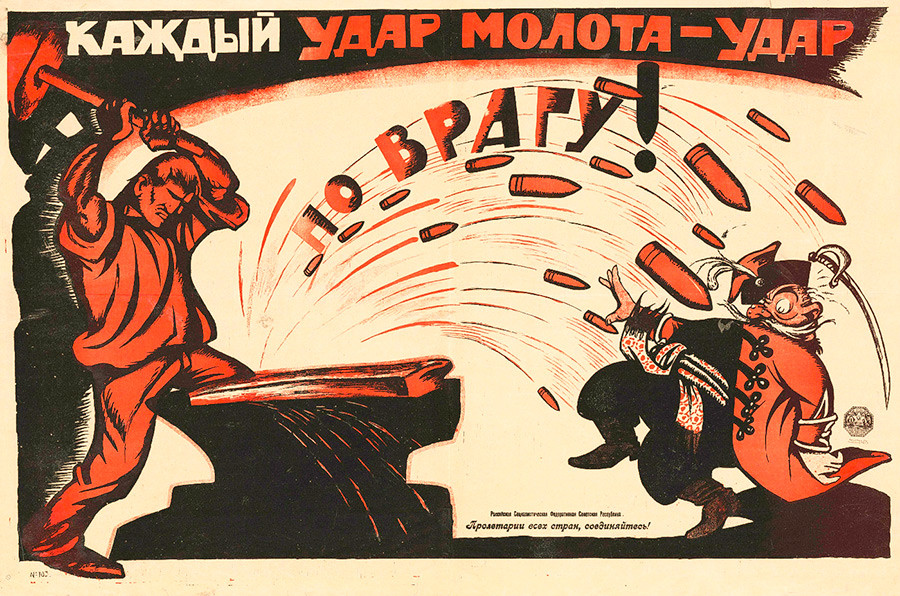 11. “He who believes in God, defend the Virgin Mary Ostrobramska under the standard of the Eagle and Pahonia!”

Based in Vilnius, the icon of Virgin Mary Ostrobramska or Our Lady of the Gate of Dawn is one of the main Lithuanian Catholic relics. The Eagle is the Polish coat of arms, Pahonia (“Pursue”) is the historical coat of arms of the Grand Duchy of Lithuania. The poster was intended to inspire the defenders of Vilnius against the advancing Red Army, who took the city in July 1920. 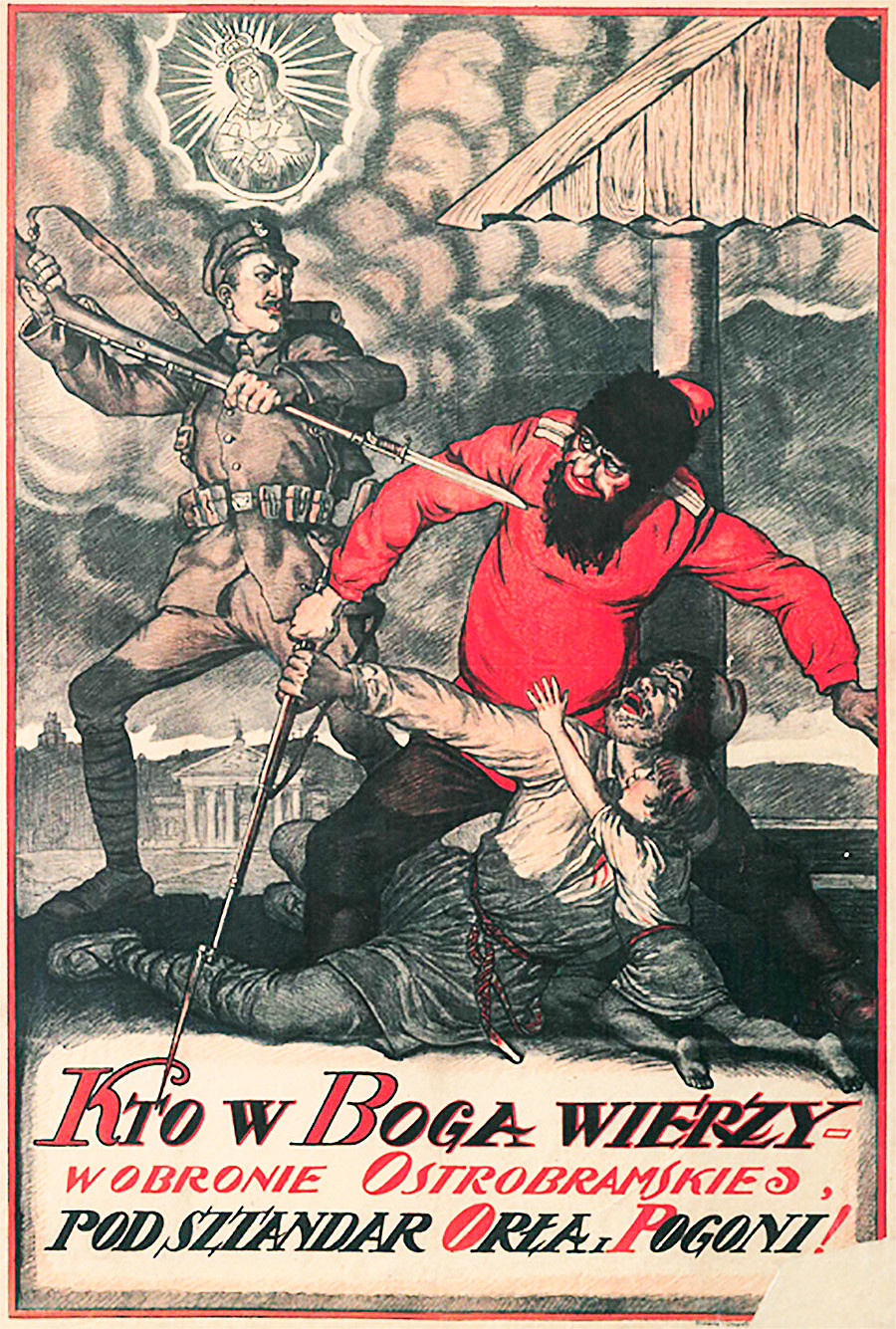 12. “Her Ladyship Poland. The last dog of the Entente. Polish Pans want to strangle the workers’ and peasants’ Russia! Death to the Pans!” 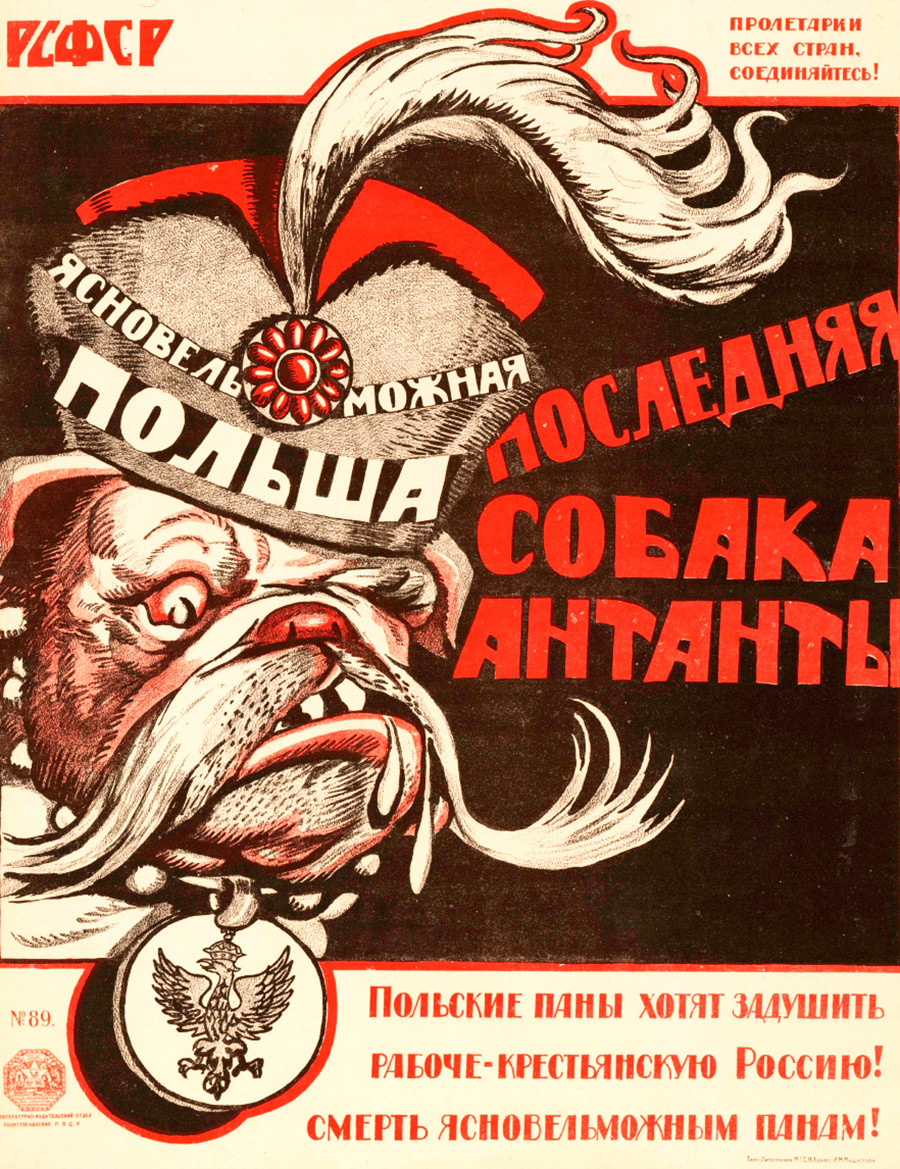 13. “Hey, whoever is a Pole, man your bayonet!” This poster with a line from the popular Polish patriotic song "Warszawianka 1831 roku" (The Song of Warsaw 1831) appeared during the battle for the Polish capital in 1920. 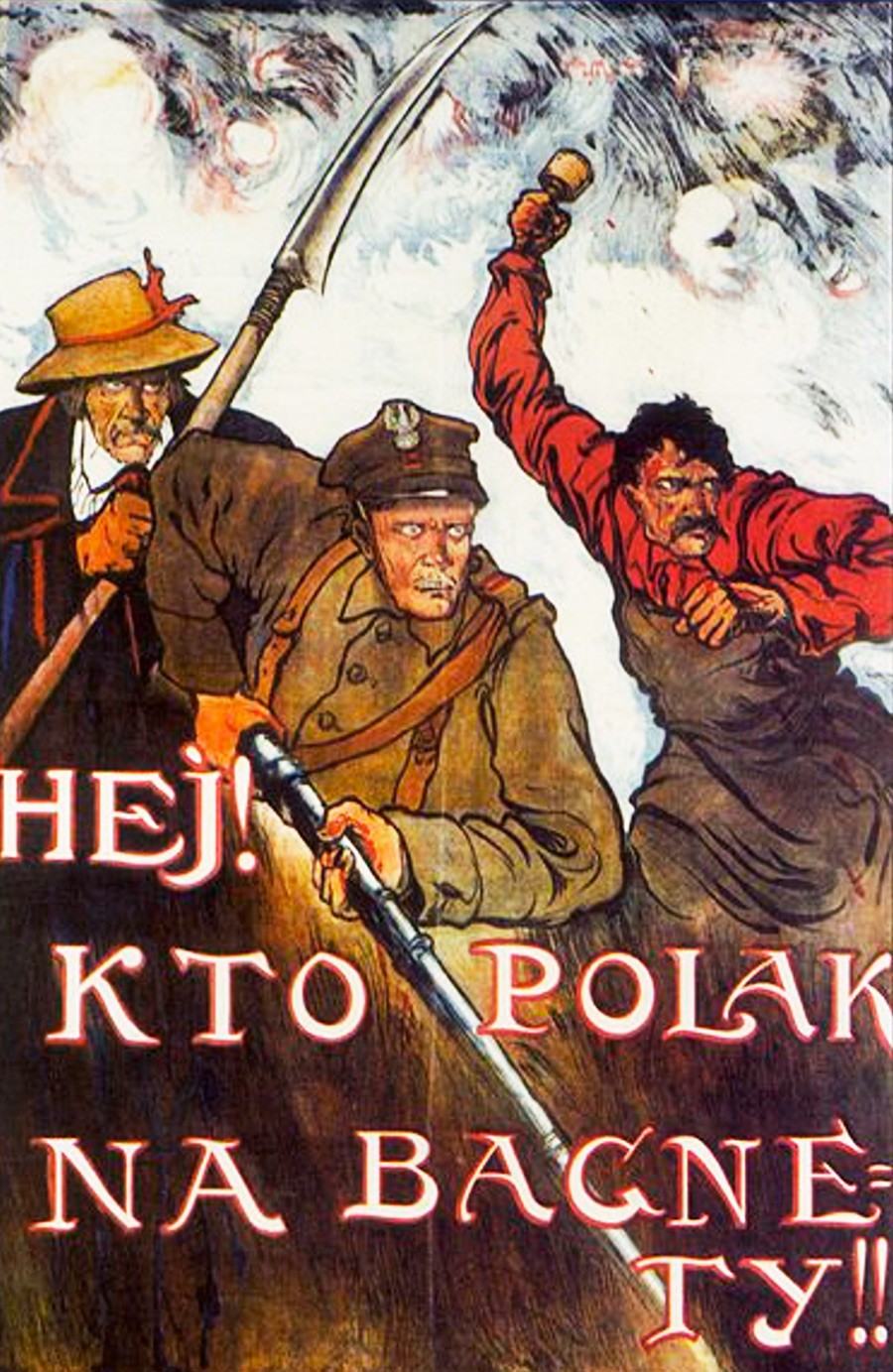 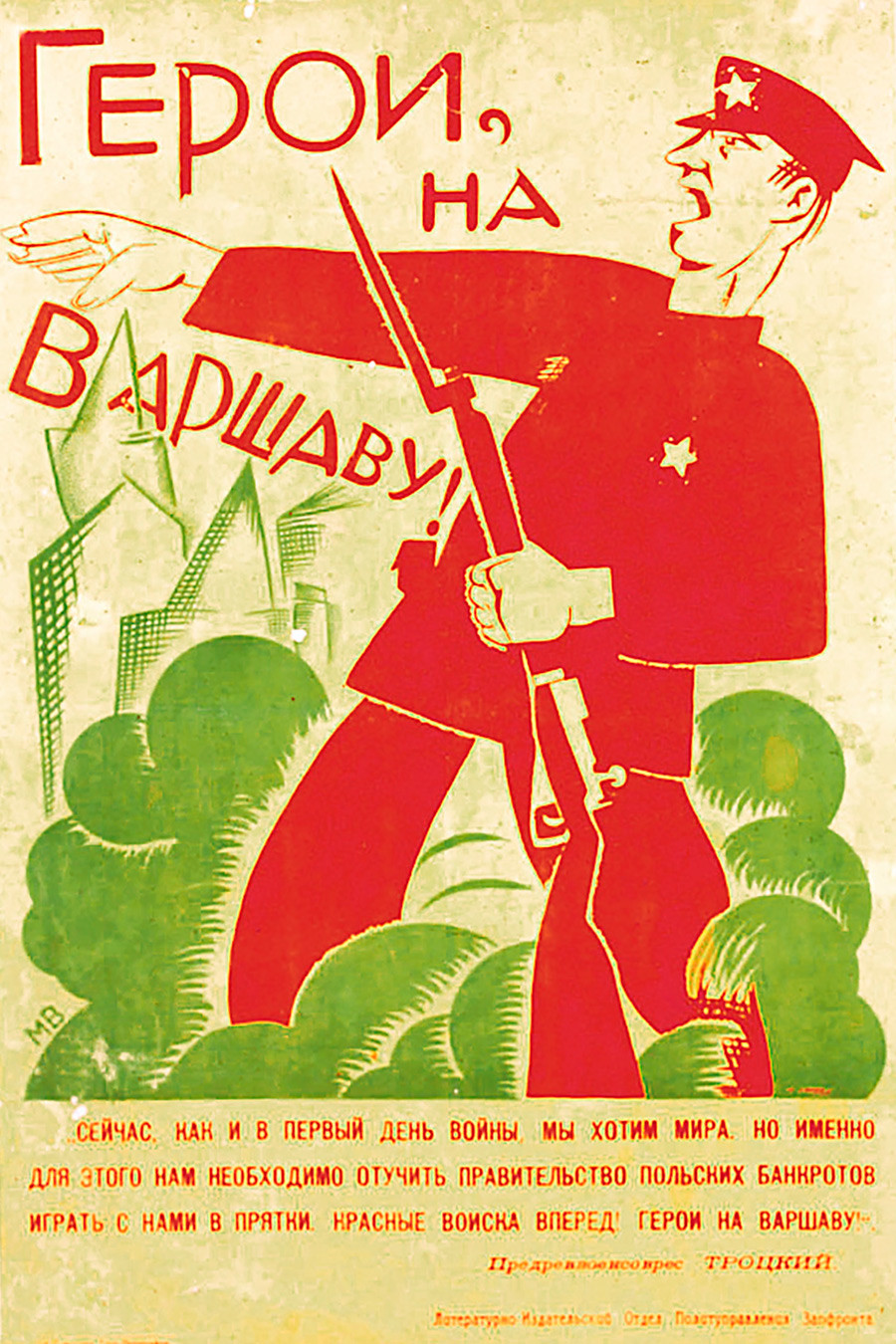 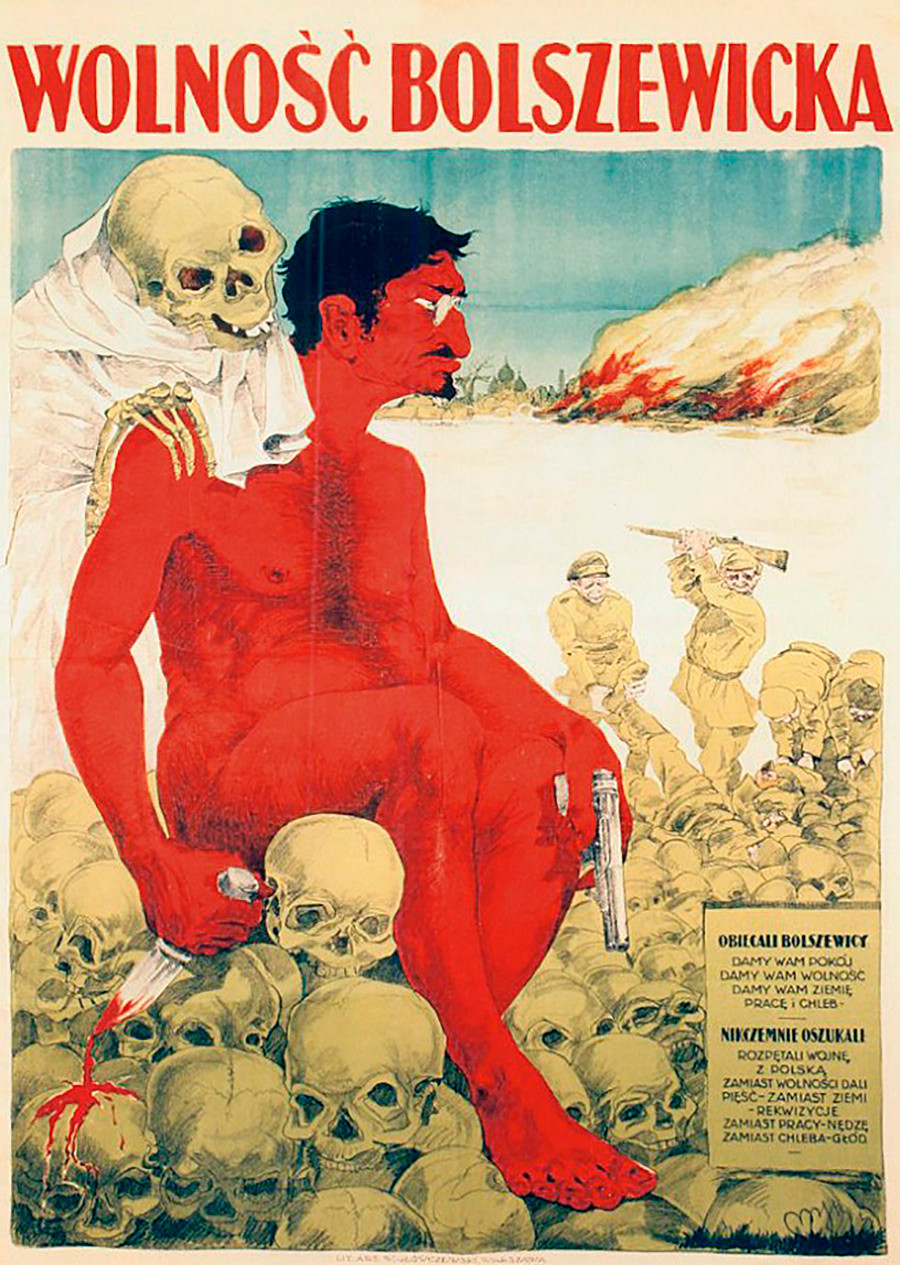 16. League of Nations’ hypocrisy: “One hand extends peace to Russia, the other gives guns to the Poles.” 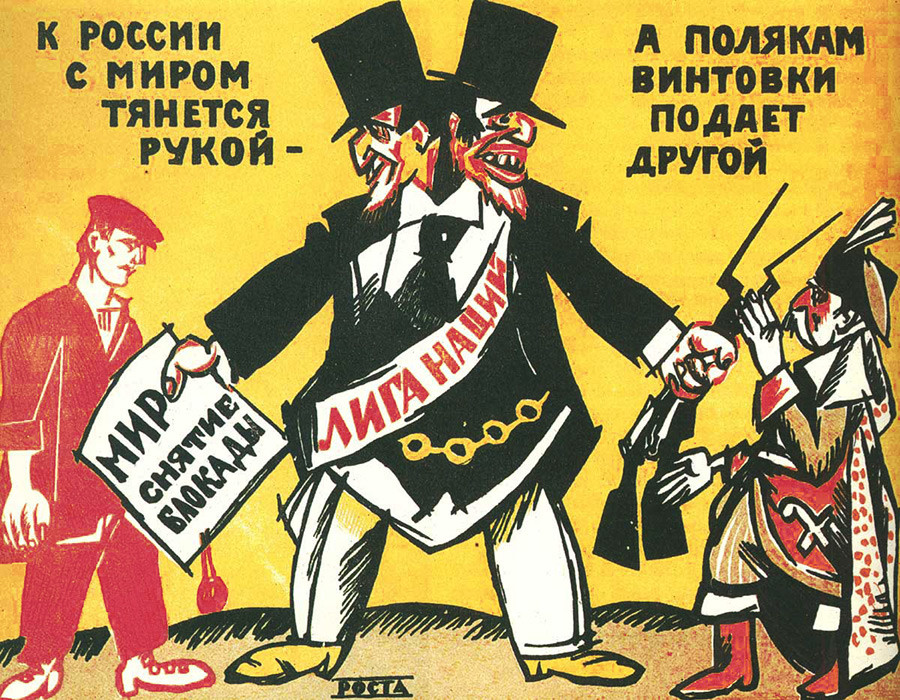 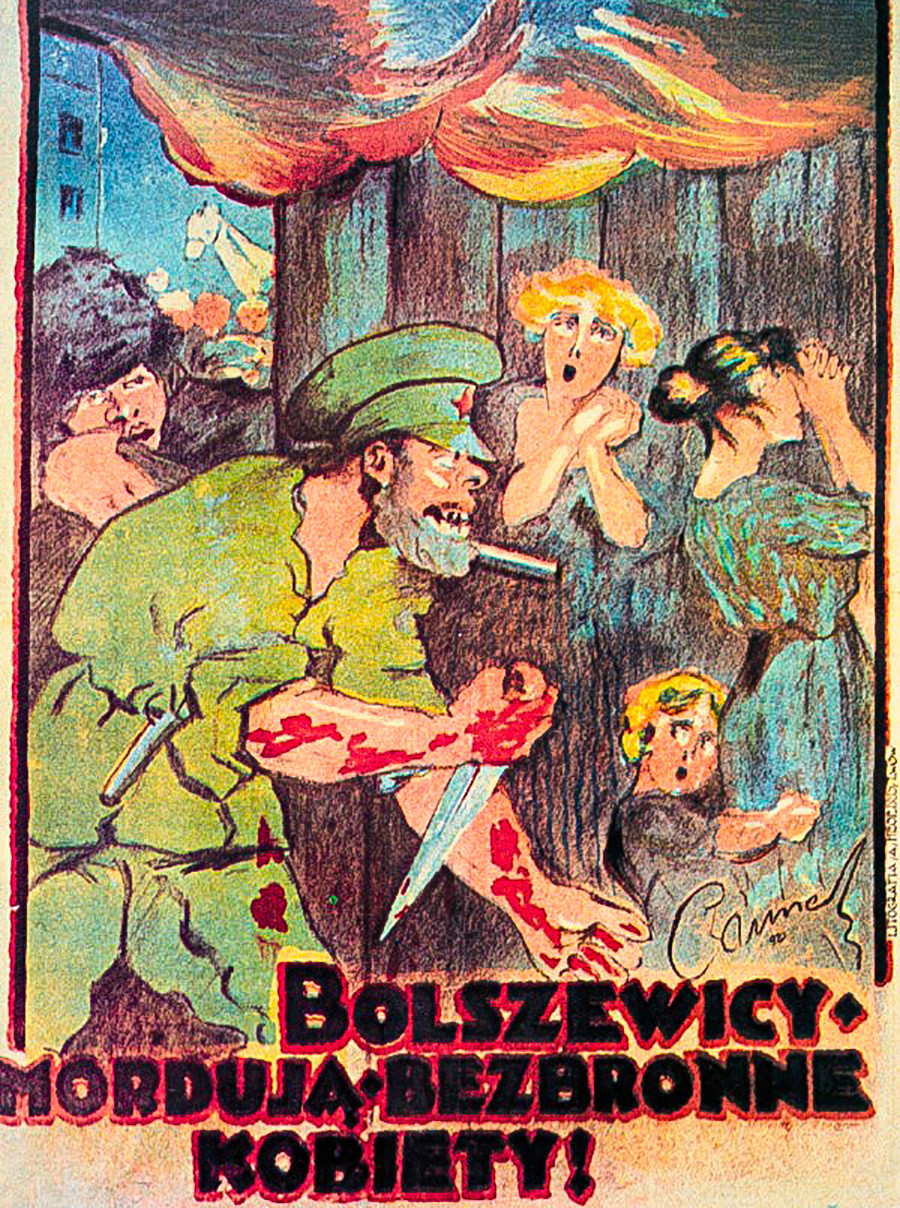 18. “Behind the Polish lord there follows a Russian landowner. Remember this, peasant!” 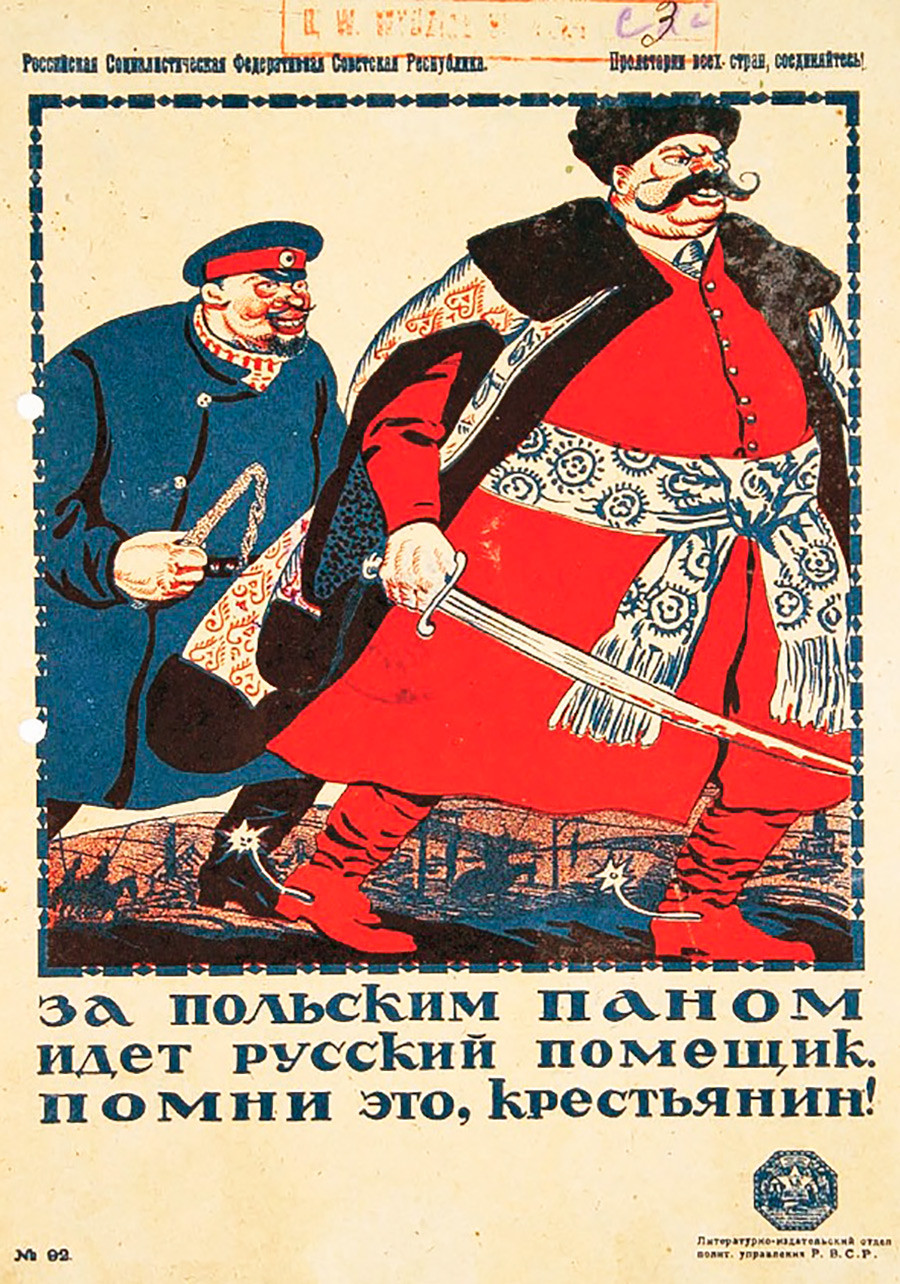 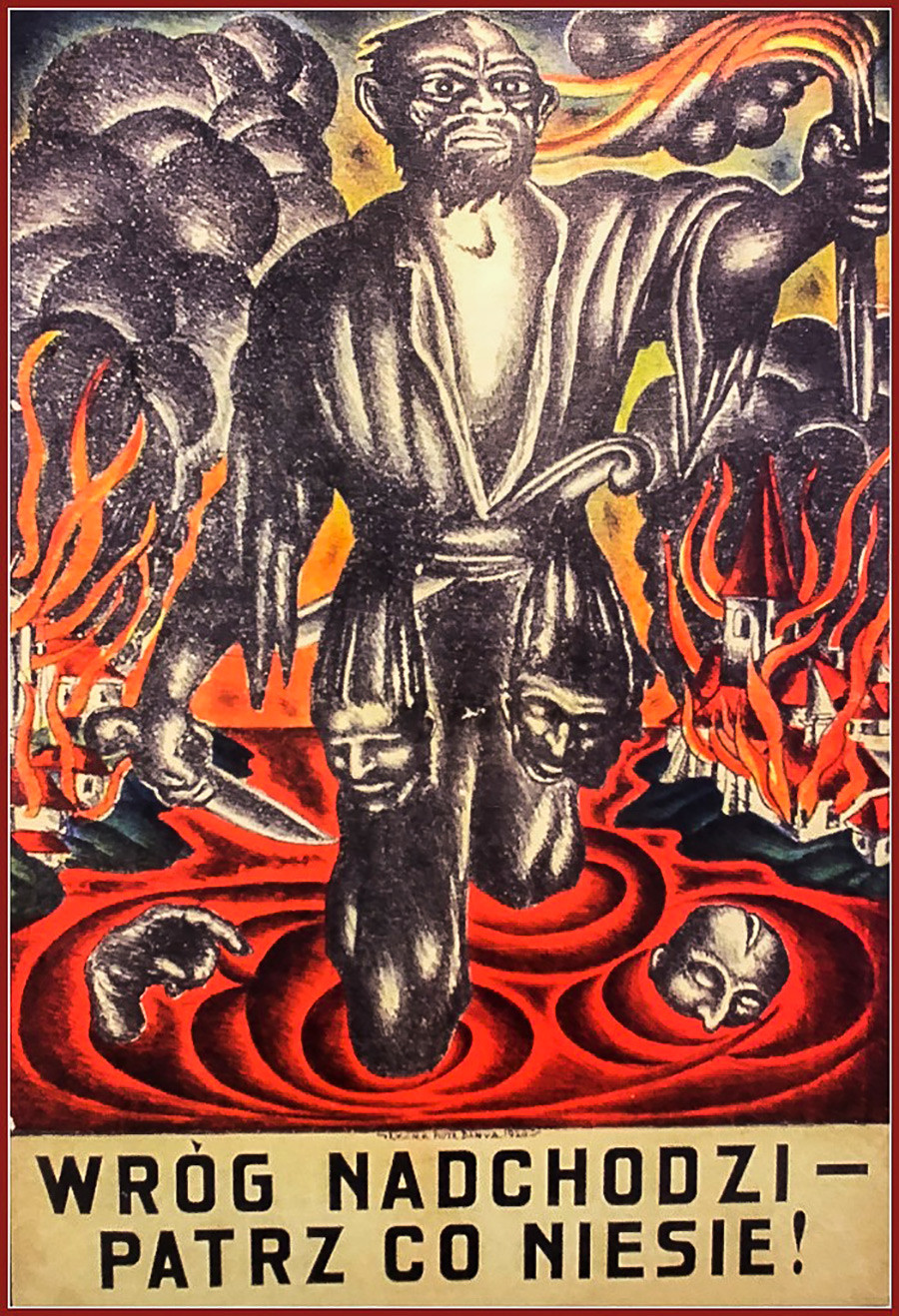 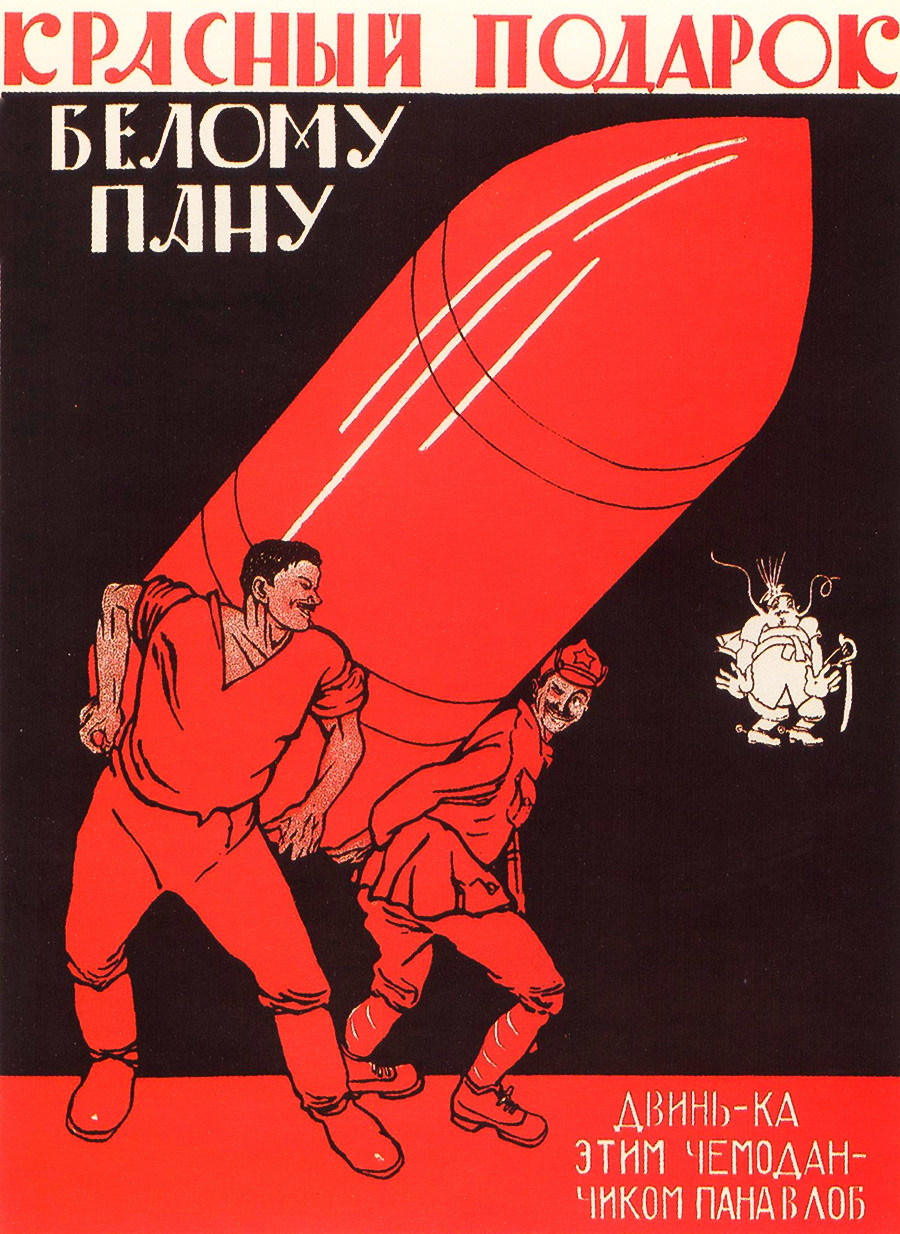