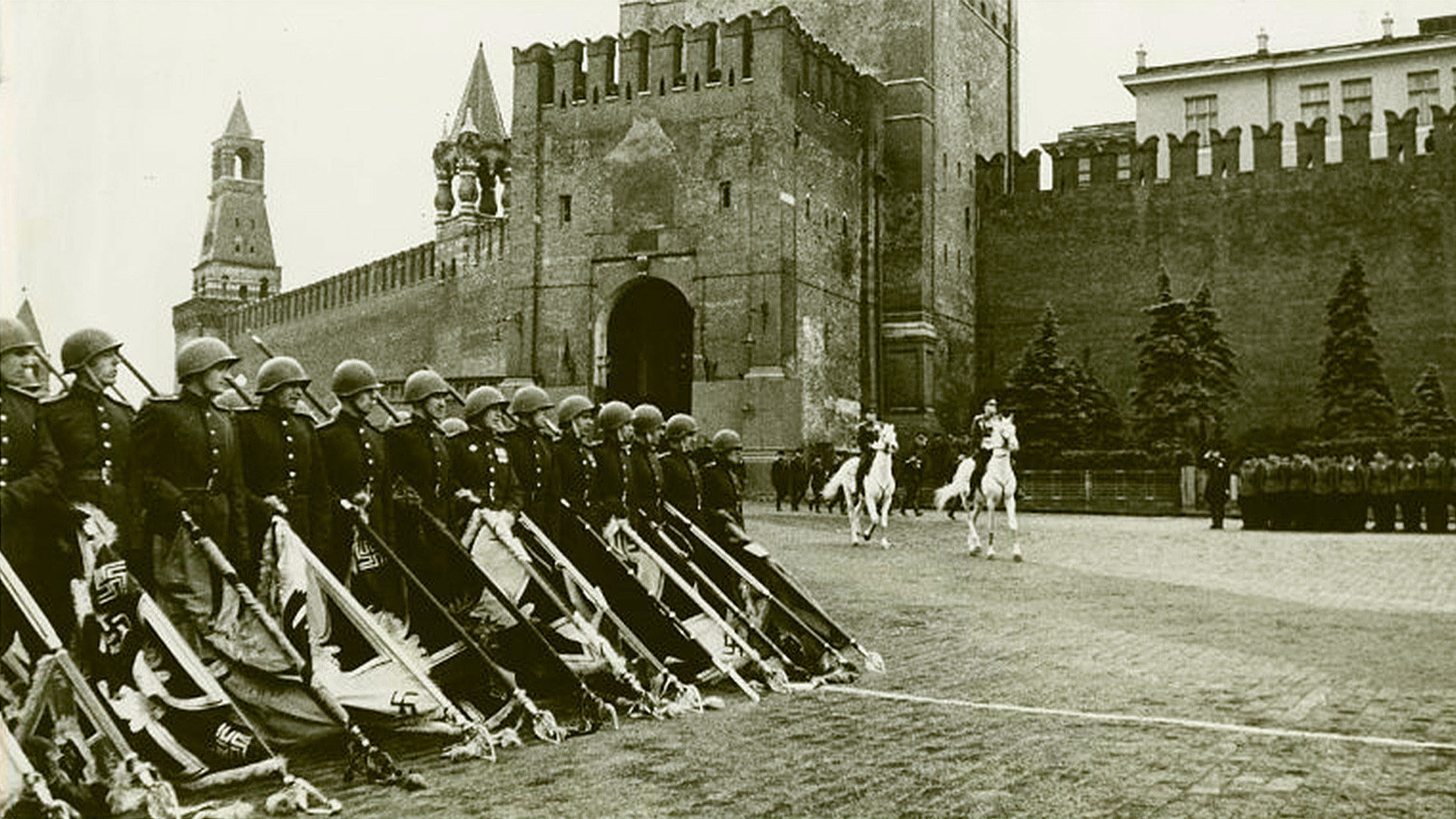 Evgeny Khaldey/МАММ/МDF/russiainphoto.ru
All the participants and spectators of the first Victory Parade in Moscow on June 24, 1945, ended up soaked to the skin, while soldiers threw Nazi banners down at the foot of the Lenin Mausoleum and American military hardware was driven through the Red Square.

The 2020 coronavirus pandemic has had a major impact on the festive events in Russia to mark the 75th anniversary of the Victory over Nazi Germany. The most important part, the traditional military parade on the Red Square, had to be postponed from May 9 to June 24. The choice of date was not accidental. It was on this day in 1945 that the very first Victory Parade was staged in Moscow. 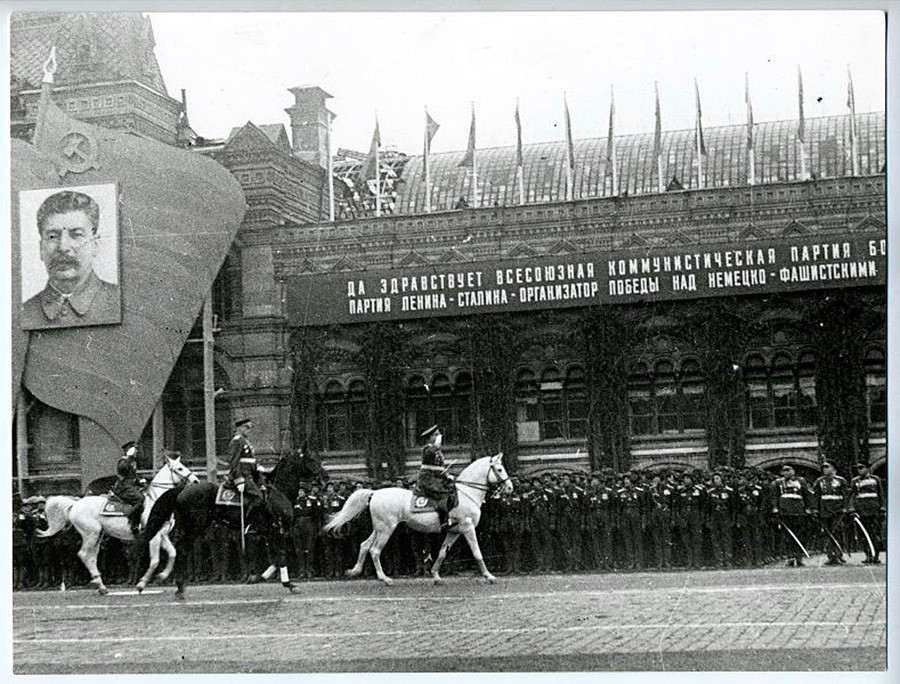 The idea of holding a “special parade”, a parade of victors, in Moscow, in which representatives of all military fronts and arms of service that had particularly distinguished themselves in battle should take part, was first voiced by Joseph Stalin at a festive dinner in the Kremlin on May 15, 1945. A week later, the General Staff submitted their plan for a Victory Parade and asked for two months to prepare for it; but they were only given one month. 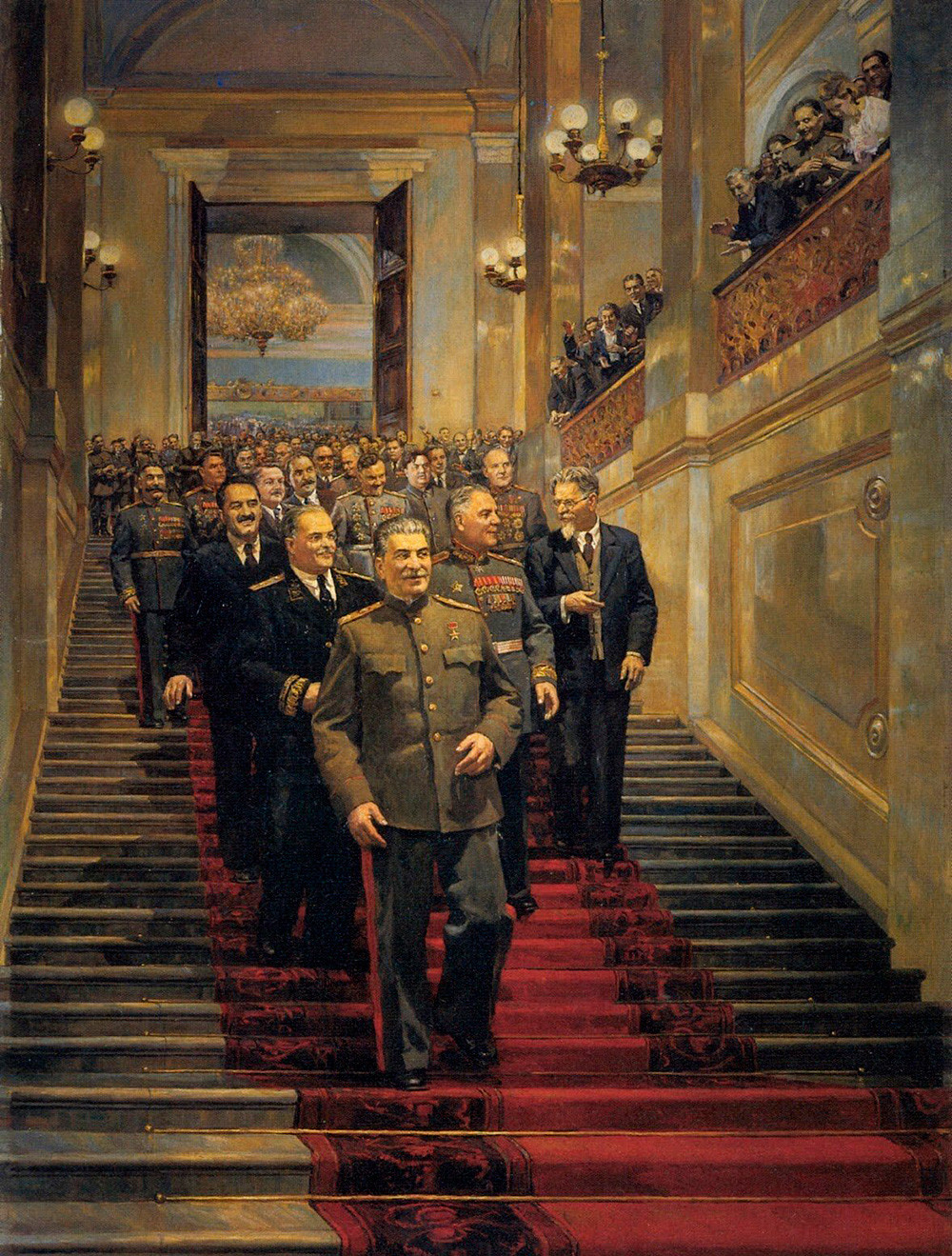 The Soviet leader refused to review the Victory Parade personally, citing his age. It was inspected by Marshal Georgy Zhukov and commanded by Marshal Konstantin Rokossovsky. According to Zhukov’s memoirs, the real reason was that Stalin simply hadn’t learned to ride a horse in time and once narrowly avoided major injury when he fell off a thoroughbred stallion during training. 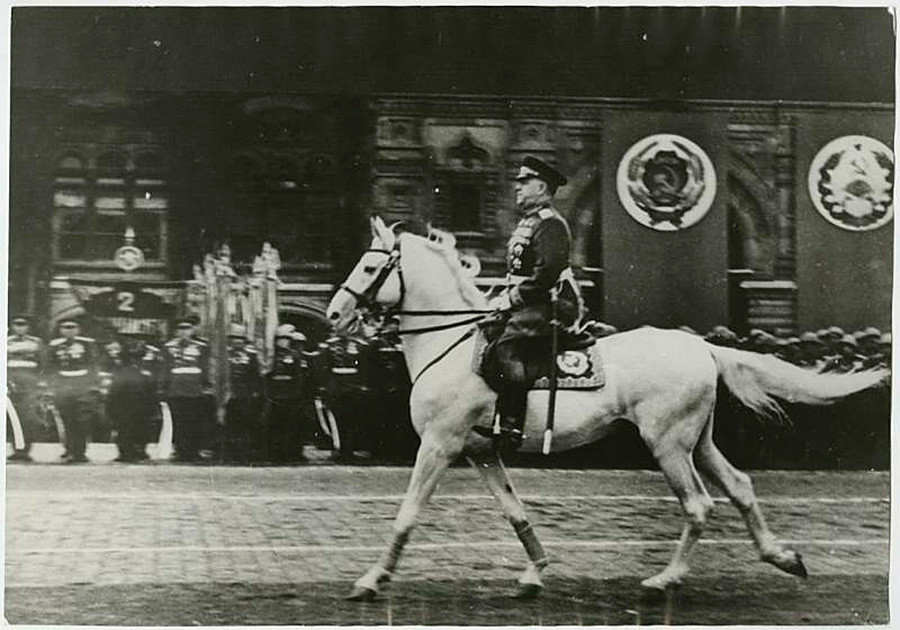 For the purposes of the Parade, combined regiments drawn from 10 army fronts and one combined naval regiment were formed. A total of 2,809 officers, including 249 generals, 31,115 sergeants and rank and file soldiers, as well as 1,400 musicians in a combined military orchestra, took part in this, the largest Victory Parade to date. Guards Sergeant Aleksandr Popov recalled: “Each of us had mixed feelings in our hearts. On the one hand, we couldn’t but think of the enormous losses we had suffered in the war and the hardship of civilians in the rear, and the fact that the people who had been there had not had enough to eat and had given their all for the sake of the front. At the same time, standing at the parade, I was thinking that, had my father been alive, at least he would have been proud of his son.” 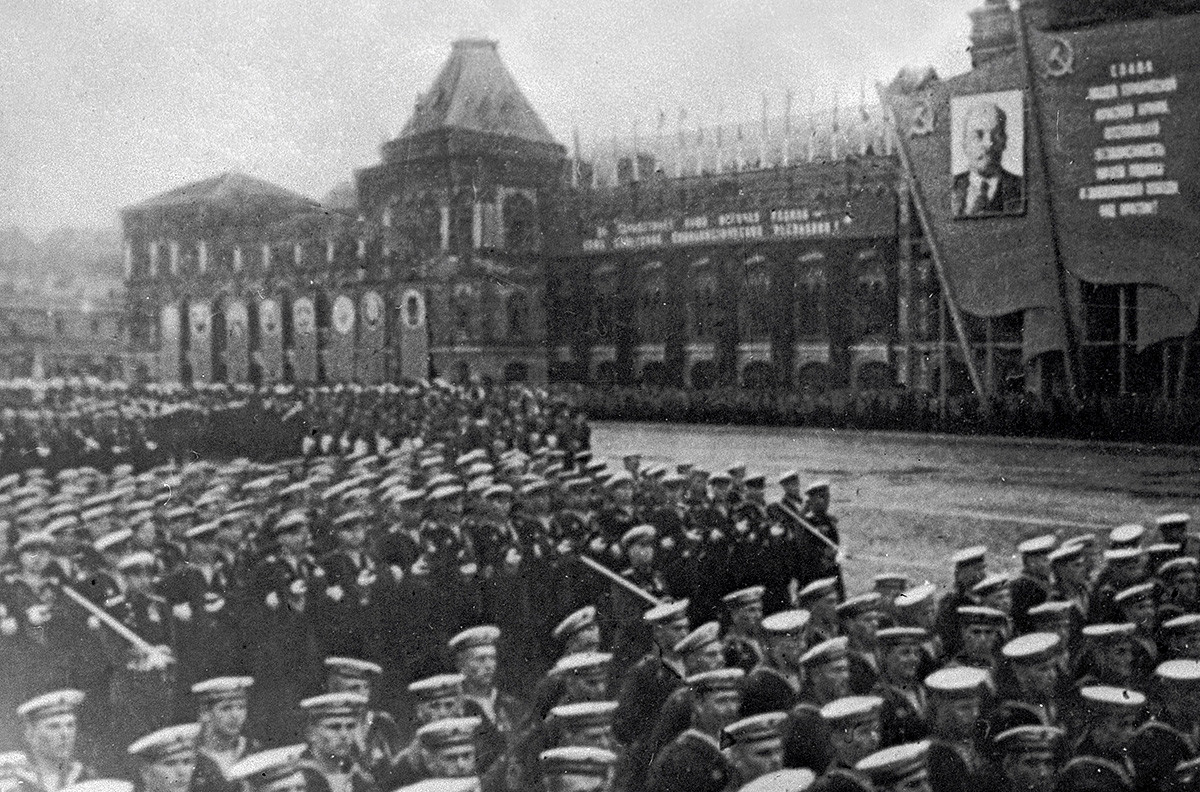 Those shortlisted for taking part in the parade had to meet certain criteria: They had to be tall (by the standards of the time) and under 30 years of age, and to have displayed courage and heroism in battle. “The instruction was to take people of at least 174 cm in height,” recalled Aleksei Kudryavtsev, petty officer I class of the Dnieper Flotilla. “I was 173 cm tall, but they still let me take part. After all, it depended on many other things, as well. For example, I had a decoration and a fairly good service record and had behaved well during my service. I had good character references.” 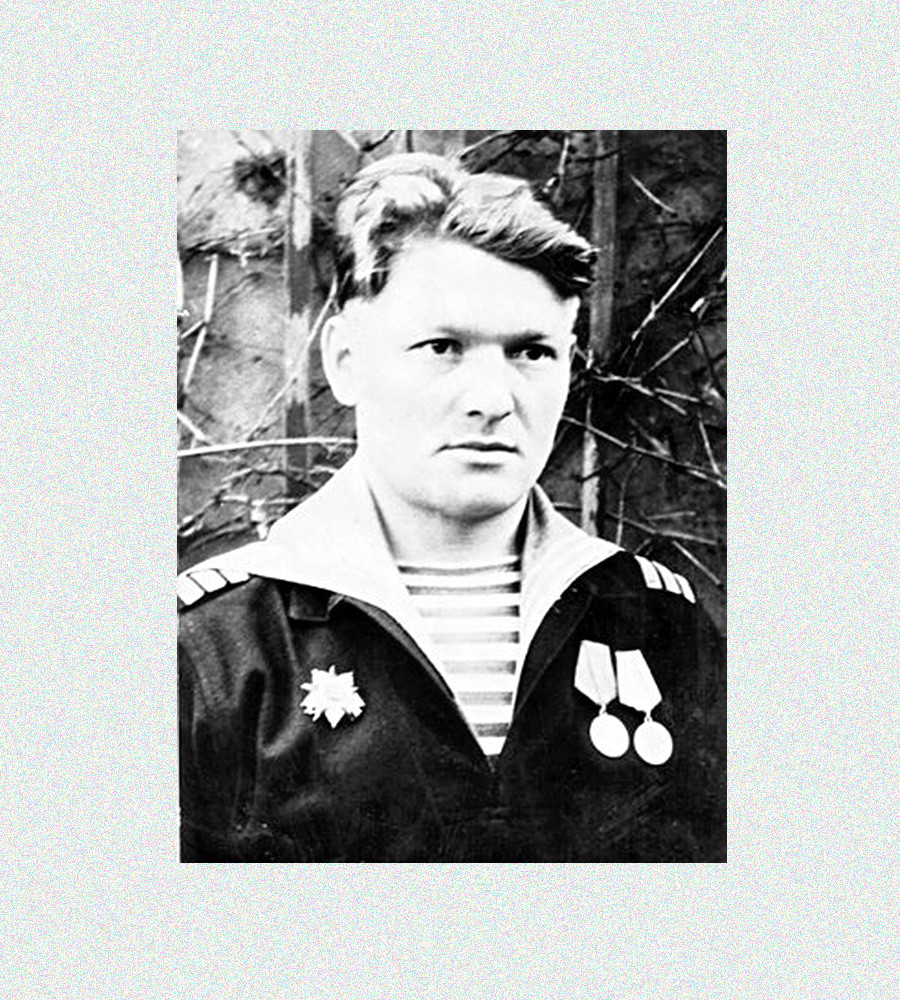 Foreigners also took part in the Victory Parade. Polish Army soldiers, who had battled their way from eastern Belorussia to Berlin alongside the Red Army, passed in a separate column. The only foreign general deemed worthy to command one of the combined Red Army regiments in the march-past alongside Soviet commanders was Bulgarian lieutenant-general, Vladimir Stoychev, who also was in attendance. 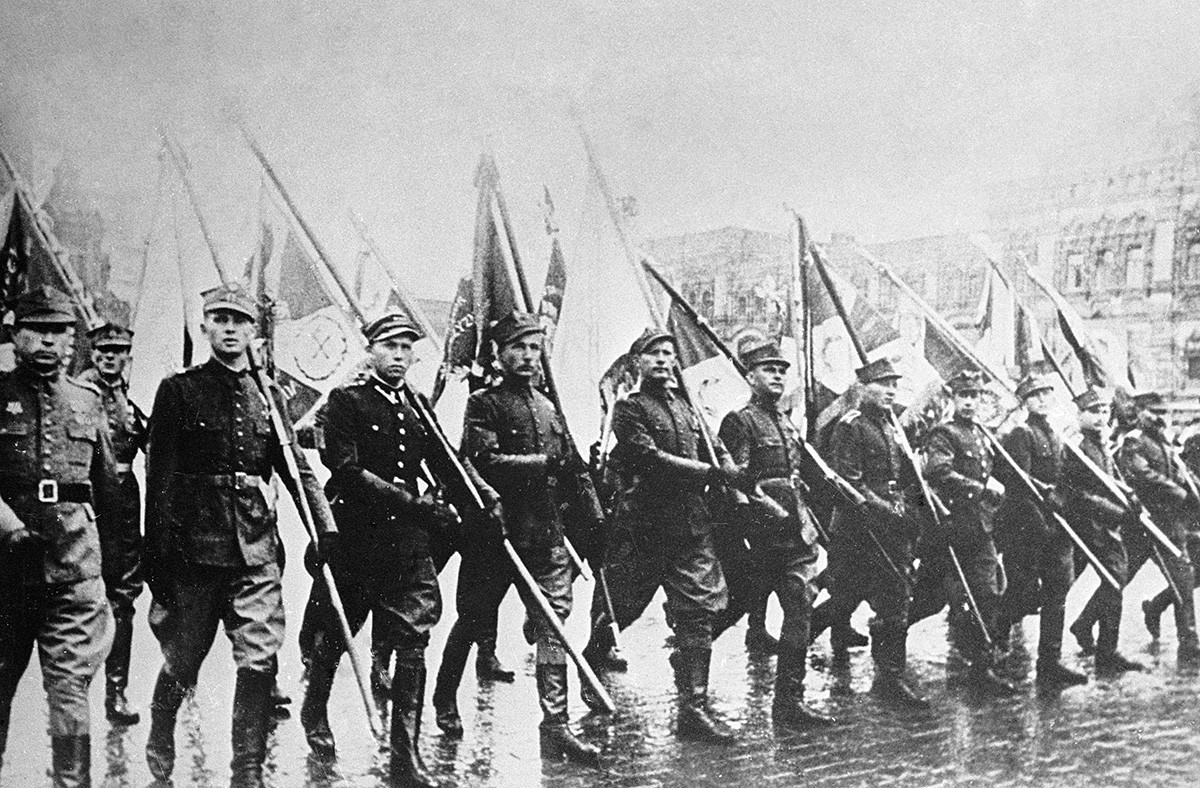 Soldiers of the Polish Army.

During the parade, soldiers were supposed to carry past the Victory Banner that had been raised on top of the Reichstag building. Those who had performed the deed in the Battle of Berlin - Stepan Neustroev, Meliton Kantaria, Mikhail Yegorov and Alexei Berest - were invited to Moscow to participate in the ceremonial proceedings. After enduring numerous injuries, however, they were not able to march well at all. Since it would have been ridiculous to change the flag bearers, the idea was abandoned, the banner was consigned to a museum and the heroes took up their places on the stands among the guests of honour. “I was not offended to find I would not be a participant in the Victory Parade, but I did think to myself: When it came to going into the attack, Neustroev was the first to go, but as for participating in the parade, it turns out I’m no good,” Stepan recalled. 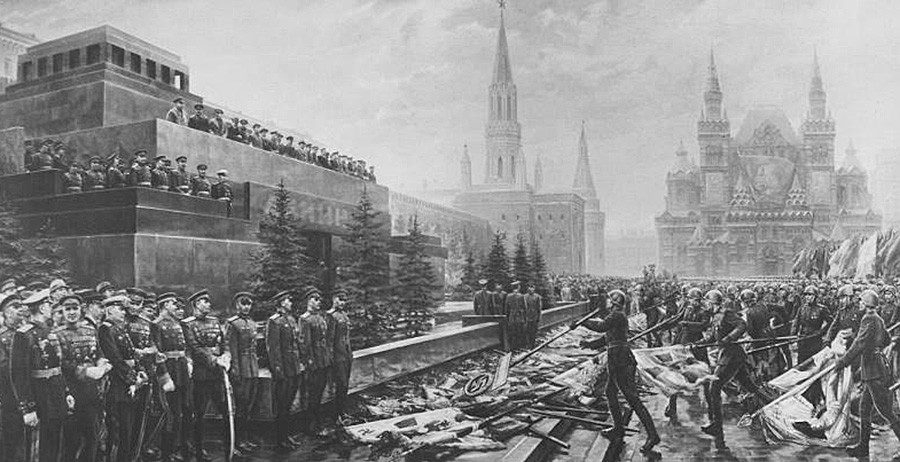 Hundreds of other Soviet standards and even 200 German ones nevertheless played a part in the Victory Parade. “When the final columns of combined regiments were passing the Mausoleum, the ceremonial music was replaced by a drumbeat, to the accompaniment of which a remarkable column of men moved forward: Soviet soldiers were carrying the standards of crushed Fascist formations, lowered to the ground. Coming level with the Mausoleum and turning with precision to face it, they threw the enemy banners down at the foot of the Mausoleum,” is how Second Guards Lieutenant Arkady Zakharov recalled the event. After the parade, the captured trophies were dispatched to a museum, and the gloves the soldiers had used to carry them were burnt. 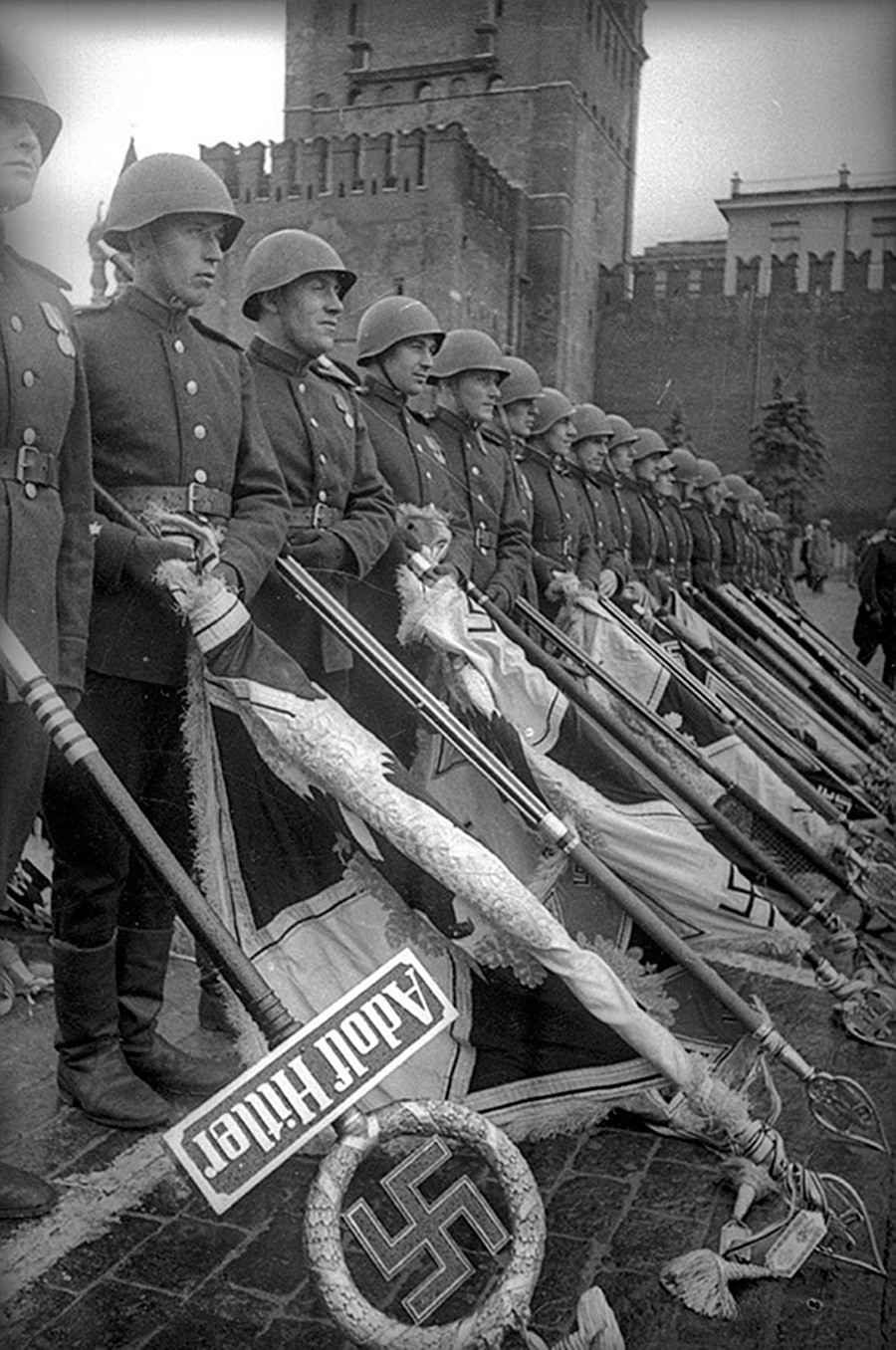 A total of 1,850 pieces of military hardware were involved in the parade of victors, including the legendary T-34 tanks, Katyusha rocket artillery systems and IS-2 heavy tanks. Allied equipment supplied to the USSR under the Lend-Lease program was not forgotten, either. American army Dodge and Studebaker trucks, as well as Willys command vehicles, passed along the Red Square. The latter have become frequent ‘guests’ at many Victory Parades held since. 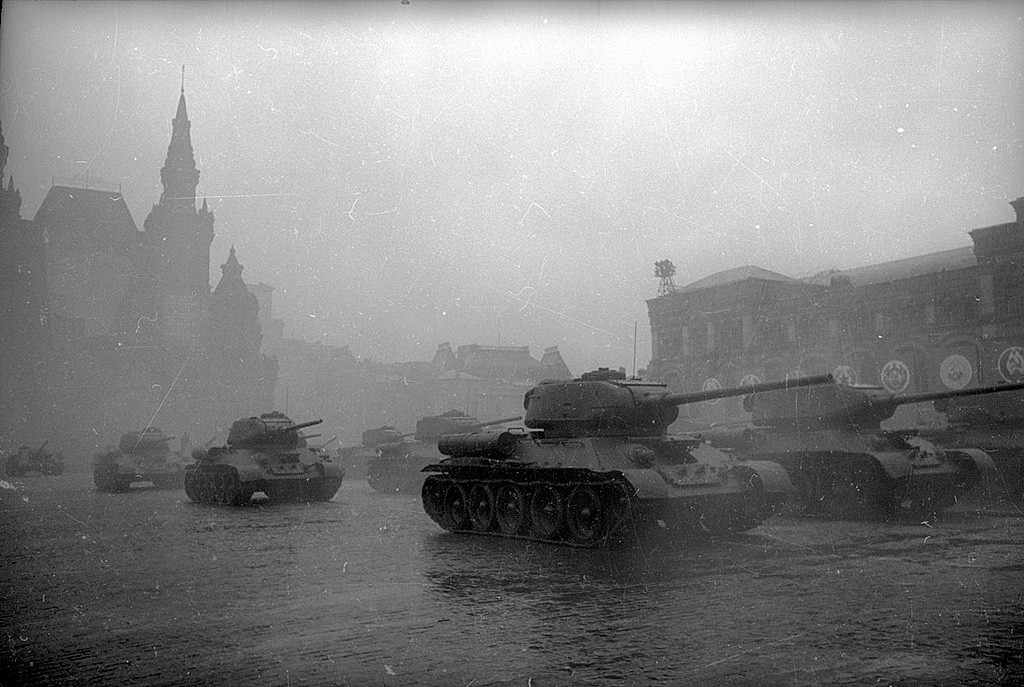 A literal dampener was put on the parade by torrential rain that fell on Moscow that day. It forced the cancellation of the airborne part of the event and of the public procession that had been planned to take place afterwards. “It was very sad when the radio announced that the procession had been called off because of the rain. In their heavy, sodden overcoats and with soaking wet feet, and with many people catching a chill, everyone in the crowd was nevertheless disappointed to have to disperse, and they went back home or to visit friends,” was how Nina Pokrovskaya, a worker at a children’s care home, described the day in her diary. Rokossovsky’s uniform was so badly drenched that it shrank when it dried and he couldn’t take it off. It had to be unstitched, with the marshal still wearing it, and then resewn. 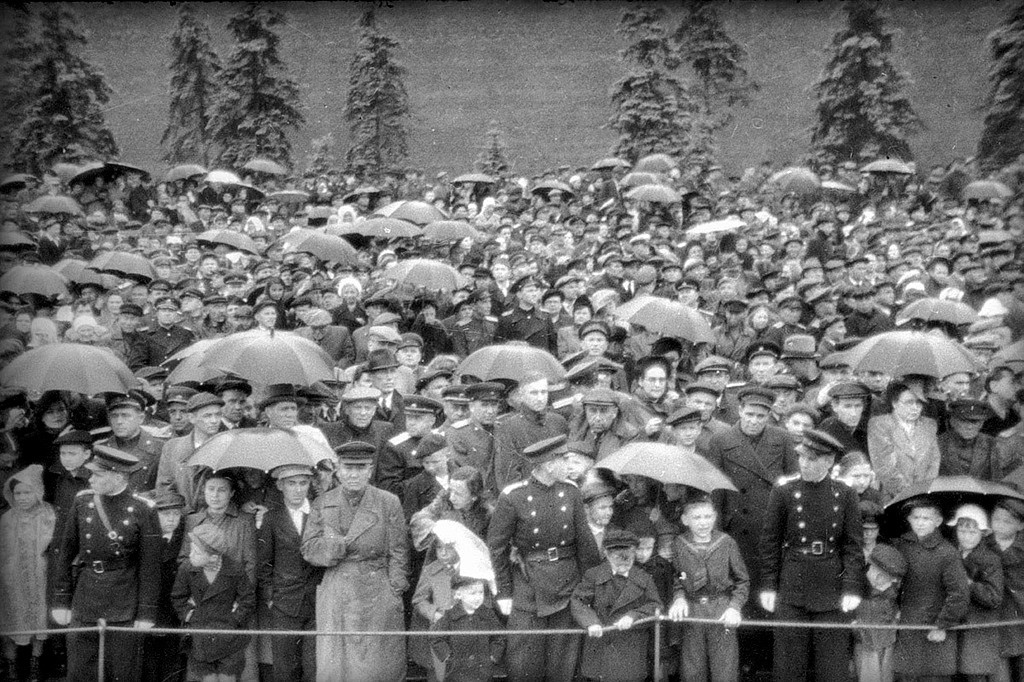 After 1945, Victory Day parades were a rare occurrence in the USSR, and were confined to major milestone anniversaries: 1965, 1985 and 1990. They have only been taking place annually in Russia since 1995. 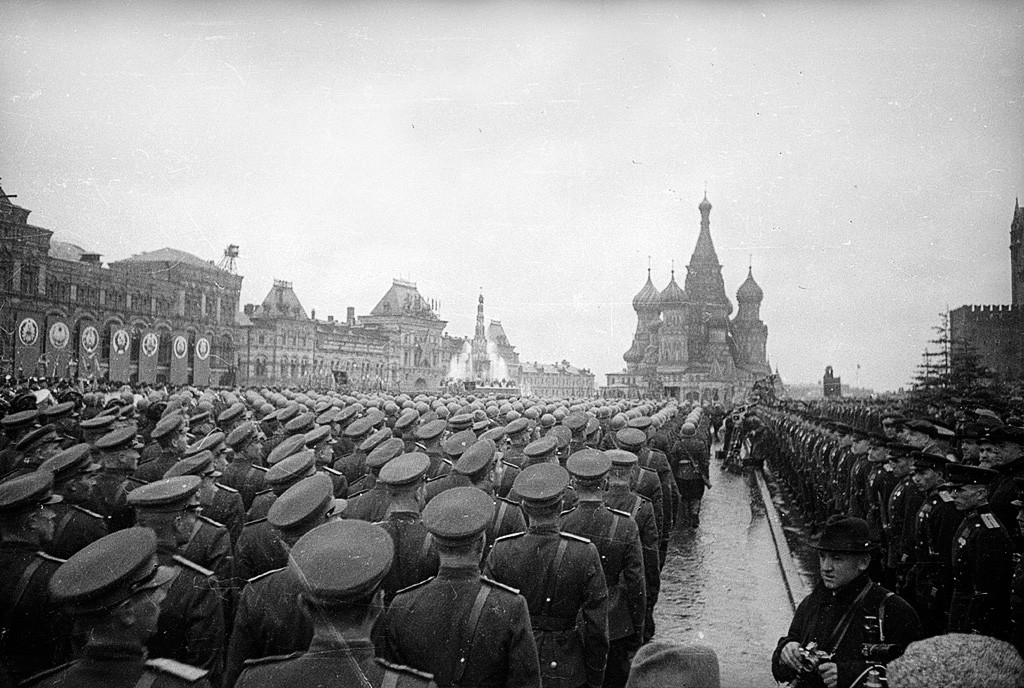