5 professions that no longer exist in Russia 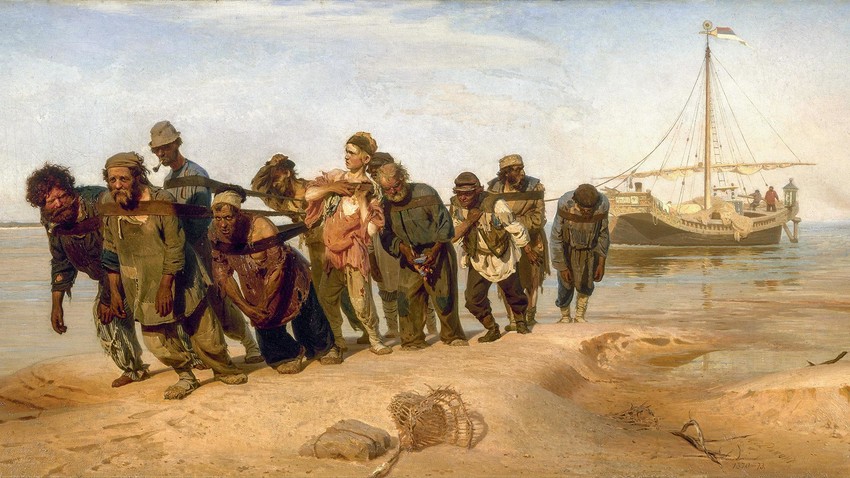 Ilya Repin/State Russian Museum
You’ll never see any of these guys on the streets in Russia anymore – maybe, only in a historical reenactment or on a theater stage. 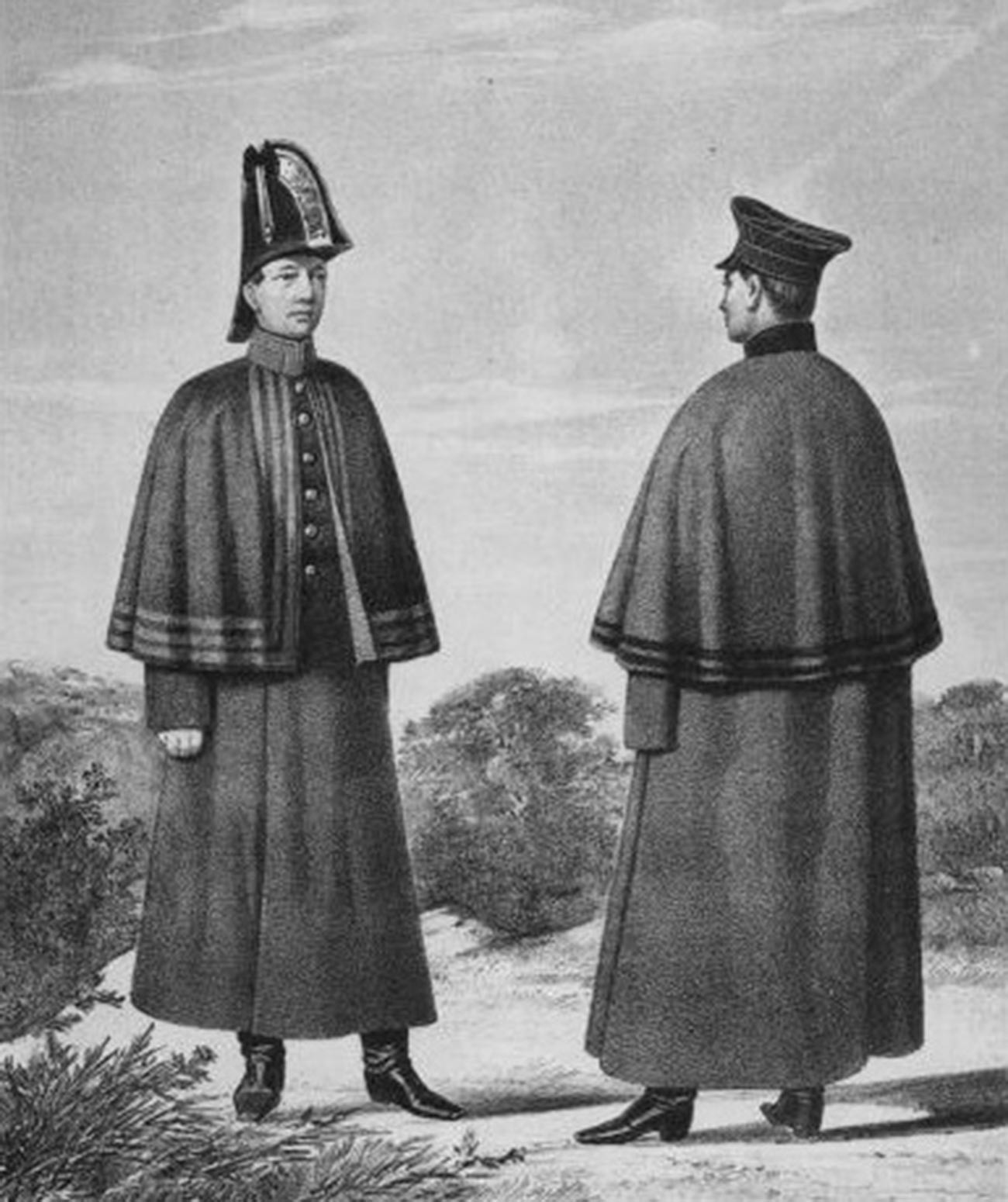 In the Russian Imperial army, a ‘batman’ (also an orderly or armsman, who is assigned to a commissioned officer as a personal servant) was called a ‘denshchik’ (derived from the Russian word день, “day”, meaning an everyday servant). Denshchiks were hired on an official salary, paid for by the army. Usually, denshchiks were hired from soldier ranks. They were responsible for: the officer’s uniform, his weapons and personal possessions, his horse, and so on. Denshchiks carried out the officer’s orders, protected him and, not the least, kept him company during hardships of war.

High-ranked officers, colonels and generals could even have noblemen as their denshchiks, and such denshchiks could be promoted to a corporal or a sergeant. However, the position was banned in the Russian Imperial Army from 1881. 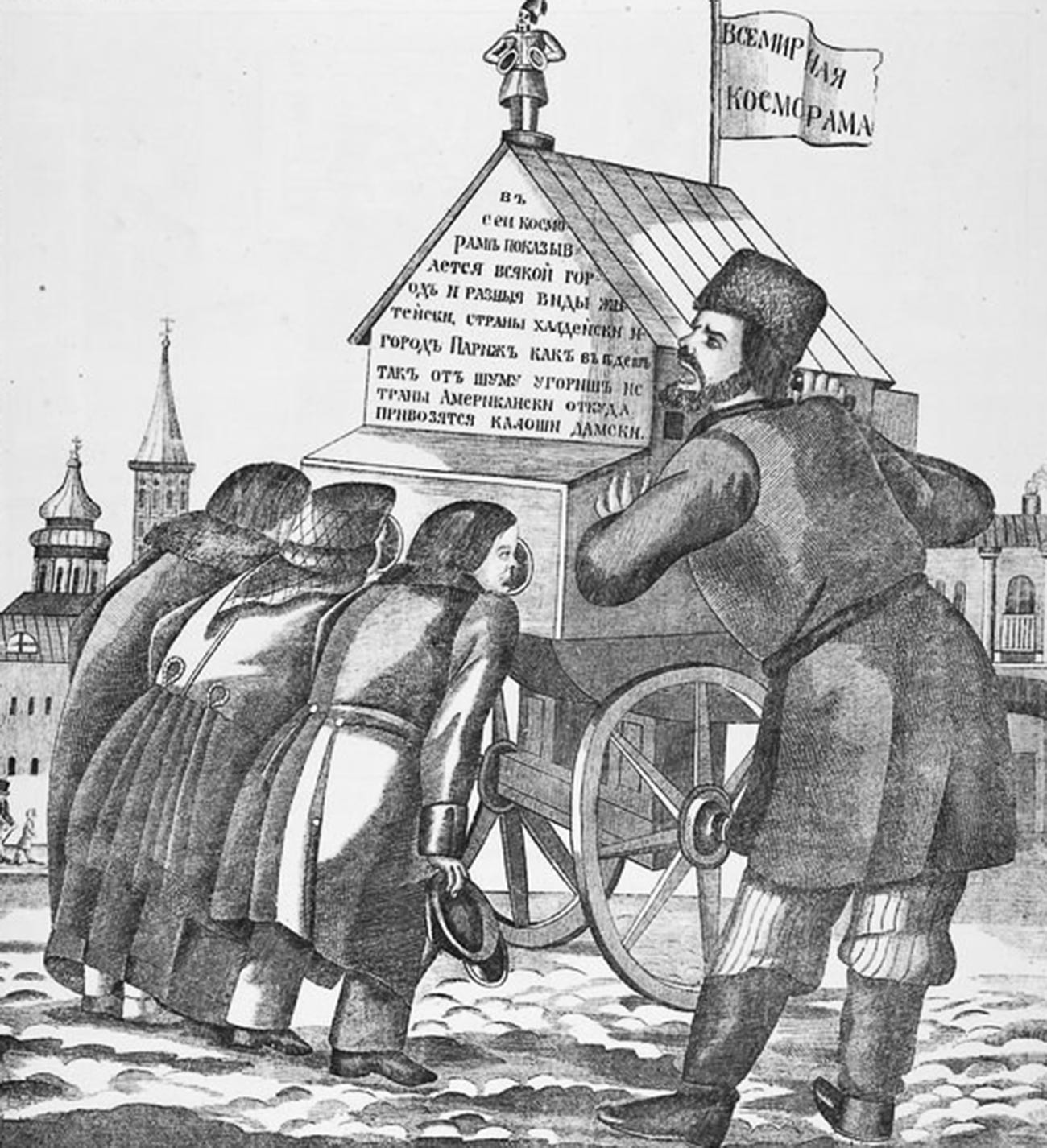 Rayok and its operator, a 19th-century etching

No English word exists for this peculiar Russian occupation. A ‘rayok’ (раёк, “a tiny paradise”) was a Russian portable peep show – a big wooden box with magnifying lenses in the front and a paper roll attached to cylinders in the back. The ‘rayoshnik’ (an operator of the rayok) rolled the handle, making the pictures ‘move’, and told rhymed jokes (rhymed prose, patter, a bit similar to the American ‘talking blues’) about what the onlookers saw. Depending on the audience, a rayoshnik could install different cylinders with different pictures.

The first rayoks usually retold Bible-related stories like ‘Adam and Eve’s Expulsion from the Garden of Eden’, hence the name. Later, different other topics appeared. Cute content was meant for children, pictures of battles and foreign countries for grown-ups, and even expressively lewd pictures were available.

A rayok was meant for simple folk and was popular at Russian fairs and during mass holidays. The contraption, as well as rayoshniks, became obsolete somewhere towards the end of the 19th century, along with the growing literacy of the population and the development of photography. 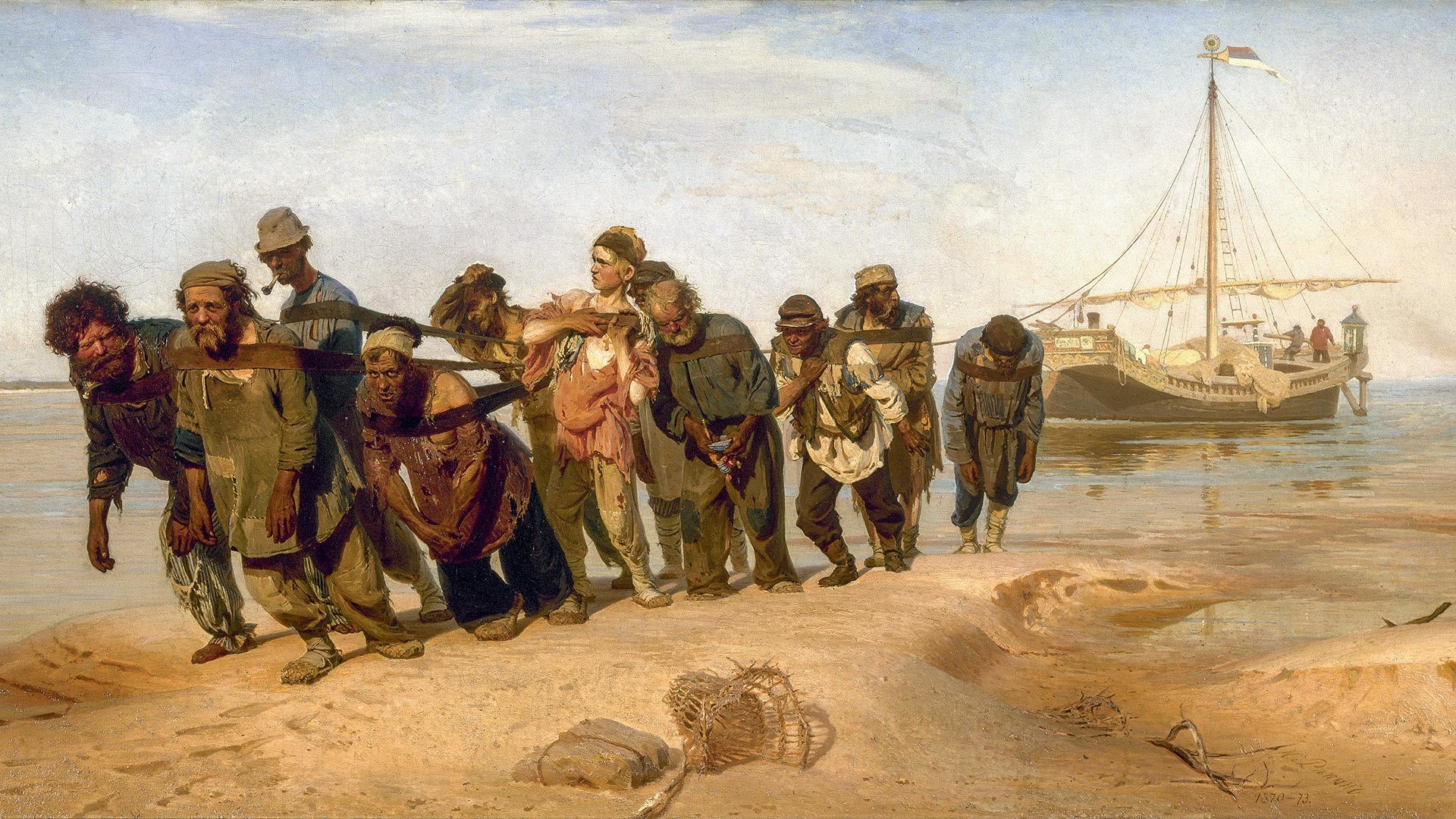 ‘Burlaks’ were men who hauled barges and other vessels on the rivers of the Russian Empire in the 17th – 20th centuries. Burlaks joined up in ‘artels’ – working packs (from 10-15 up to 100 men) that had certain hierarchy, rules and techniques. They hauled vessels using hemp ropes tied to the vessel’s body; the rope was connected to leather belts that were wrapped around a burlak’s chest and shoulders.

Why not use horses for this purpose? Because in those days, very few river shores had roads alongside them that could allow effective horse-hauling. Meanwhile, one barge could be pulled by up to 300 burlaks!

Rivers were the main means of freight transportation in Imperial Russia; as soon as railroads (and steam engine vessels) appeared in the mid-19th century, the burlak craft declined and eventually disappeared. 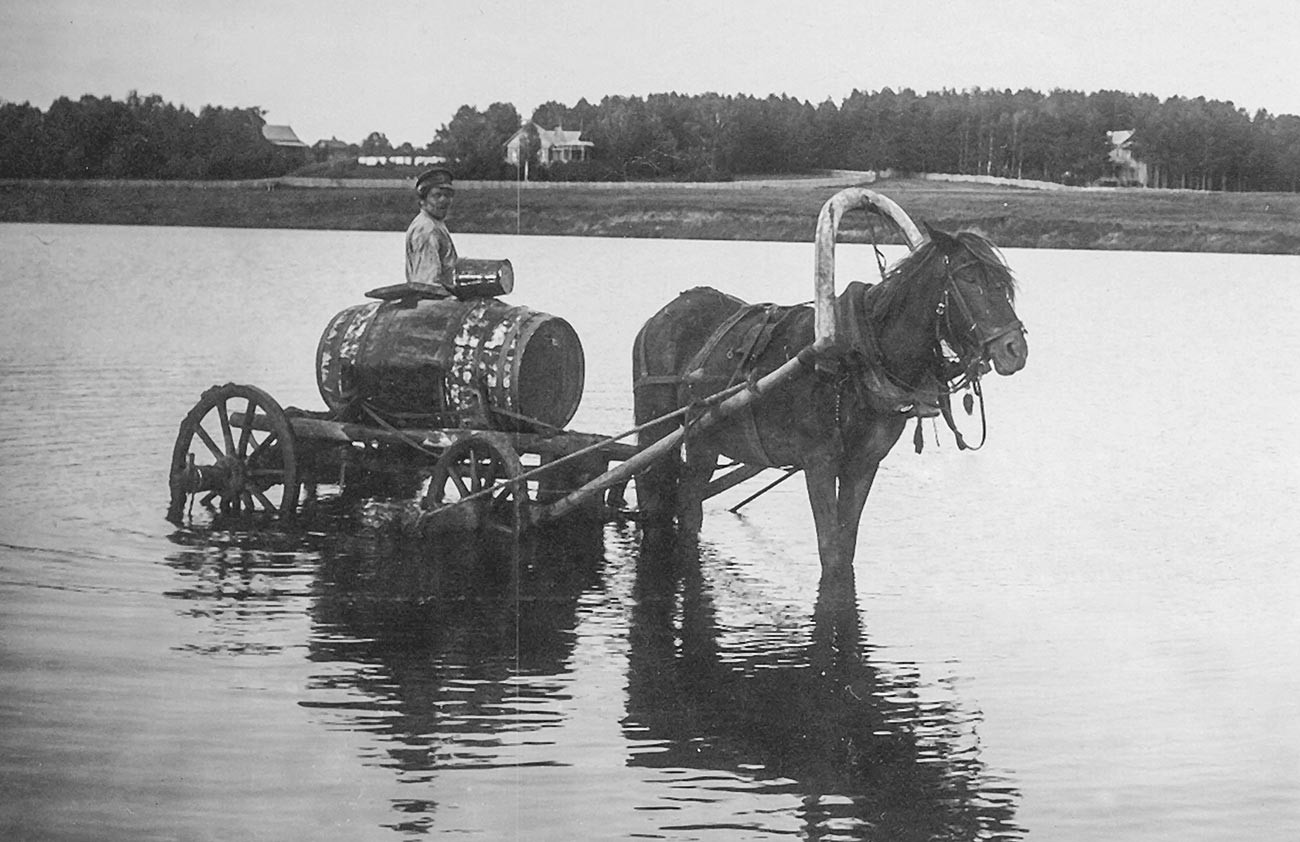 In Russian villages, drinking water was available to everyone from the wells. In the cities, the situation was more complicated. The first water pipe appeared in Moscow only at the end of the 18th century, while tap water in apartments in the cities became available widely only at the beginning of the 20th century. Up until then, people in Russian cities would have to buy water from ‘water carriers’, who drove two-horse carriages with water tanks on them: green tanks with river water (for washing, etc.) and white tanks with drinking water. Also, pedestrian water carriers went with smaller barrels to get to the places where carriages couldn’t reach, transporting water on sledges in winter or hand-drawn carriages by summertime. 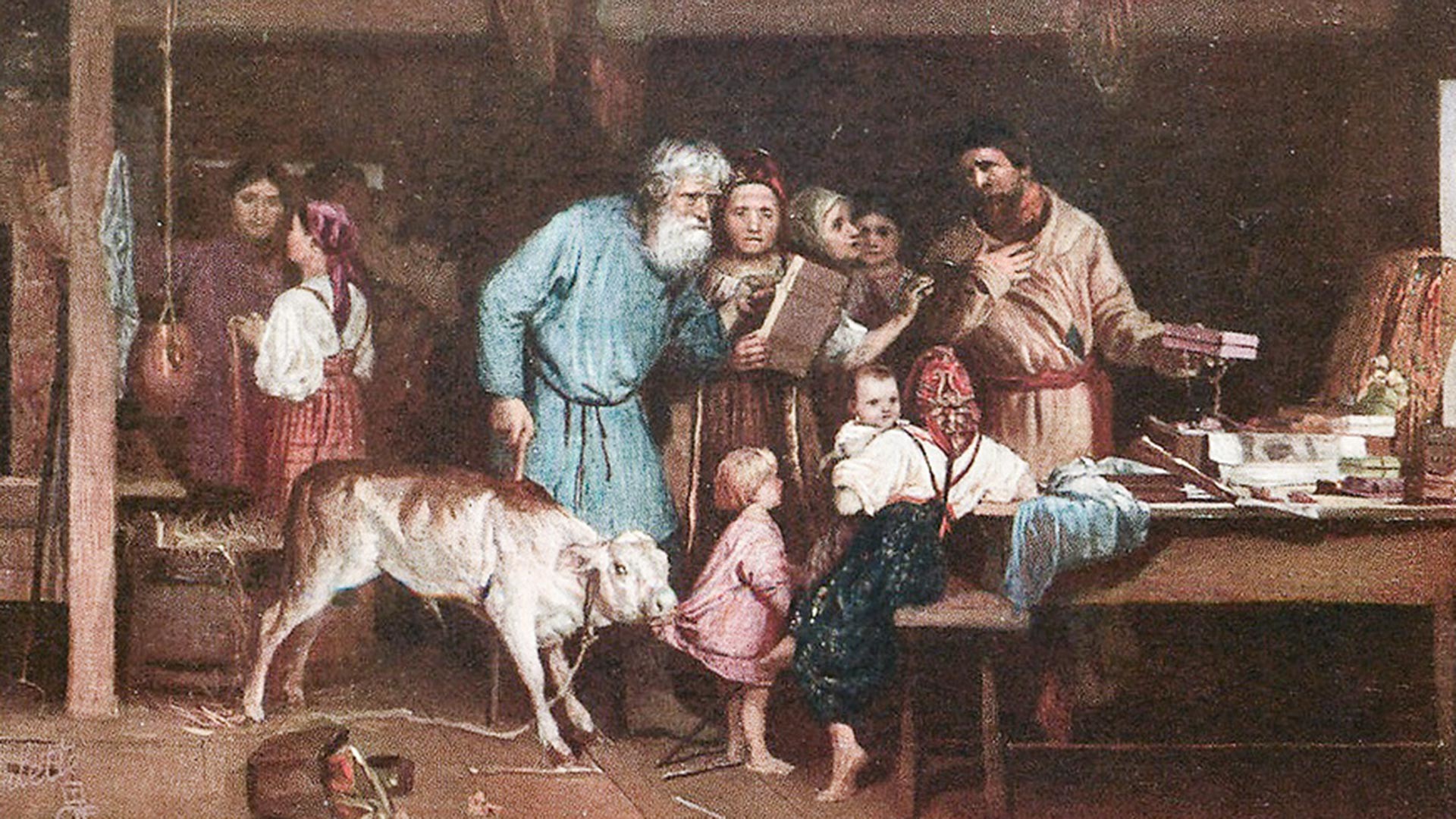 ‘Ofenyas’ were traveling salesmen in Russia before railroads appeared. But they were not street vendors that walked around towns and cities selling groceries, sweets, fast foods and other small items. An ofenya was a unique Russian occupation, and almost all of them were concentrated in several villages of Vladimir and Nizhny Novgorod regions.

Ofenyas traveled on foot to all regions of the country, including very remote ones. Their primary commodities were books and icons. Many of these icons were the Old Believer ones, banned by the state and officially not produced. Ofenyas contacted clandestine icon painters who produced such icons and secretly carried them to remote Old Believer villages, where they could sell them for very high prices, because doing so was a criminal offense.

Partly, ofenyas were members of the criminal underworld. They created a special unwritten ‘ofenya language’, a distorted, slang version of Russian used to communicate with each other in the presence of “non-ofenya” people, in order to disguise the subject of the conversation. Unbelievably, this language is still used among some Russians, because it became the base for contemporary Russian criminal slang, interwoven with everyday Russian slang. Many present-day Russians don’t even know they are using ofenya language very often!