How Chinese gangs terrorized Russia for half a century 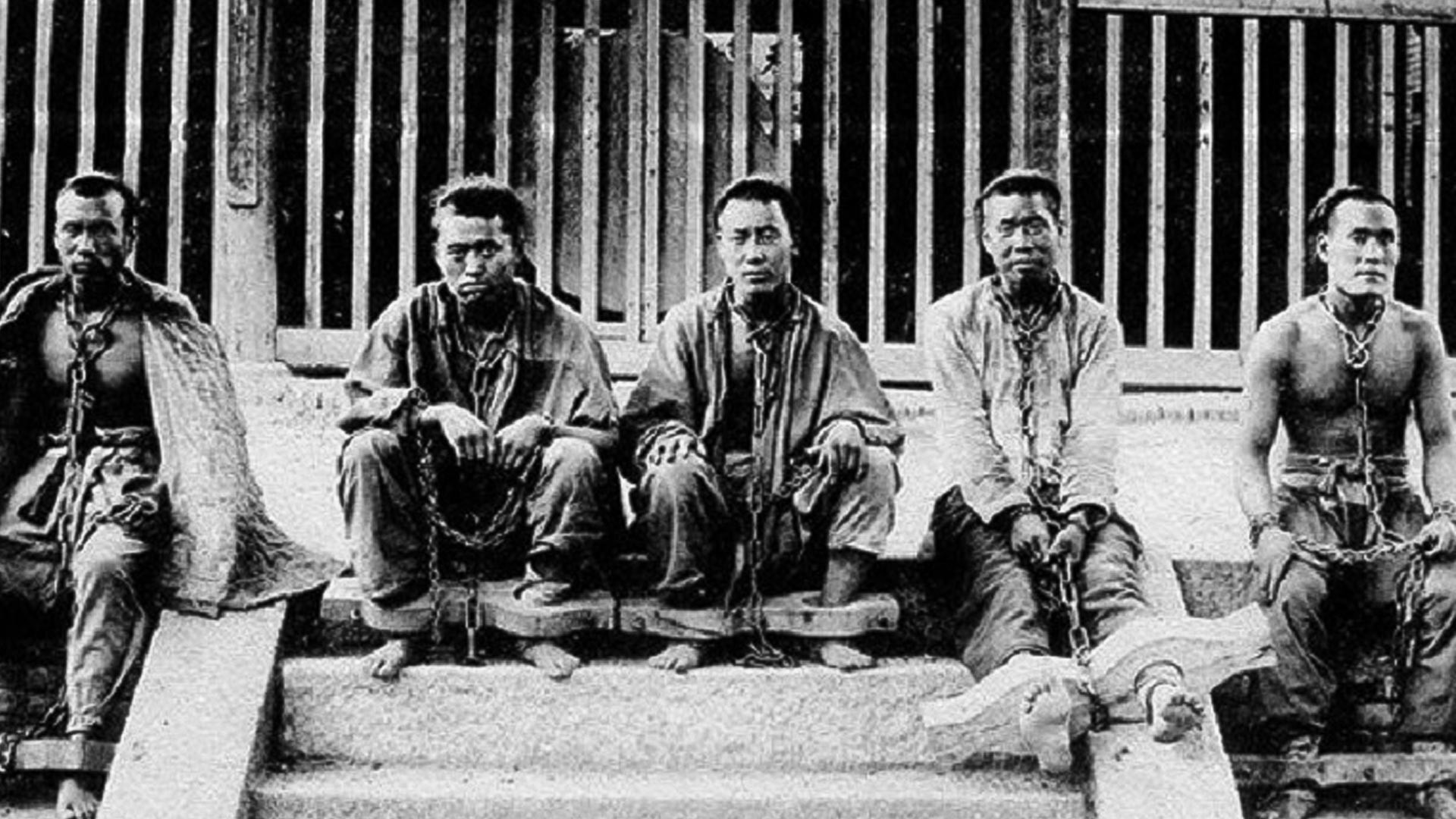 A. Kuznetsov
For decades, neither Russia nor China could defeat the cruel and merciless Honghuzi. In addition to engaging in typical criminal activity, members of the gang took part in crucial political processes in the Far East.

Screaming and cursing, wearing frightening masks of devils and monsters, and furiously brandishing their weapons, they raided villages, robbing and killing everyone who got in their way. Chinese bandits known as the Honghuzi terrorized the population of northeastern China and the Russian Far East for more than half a century. 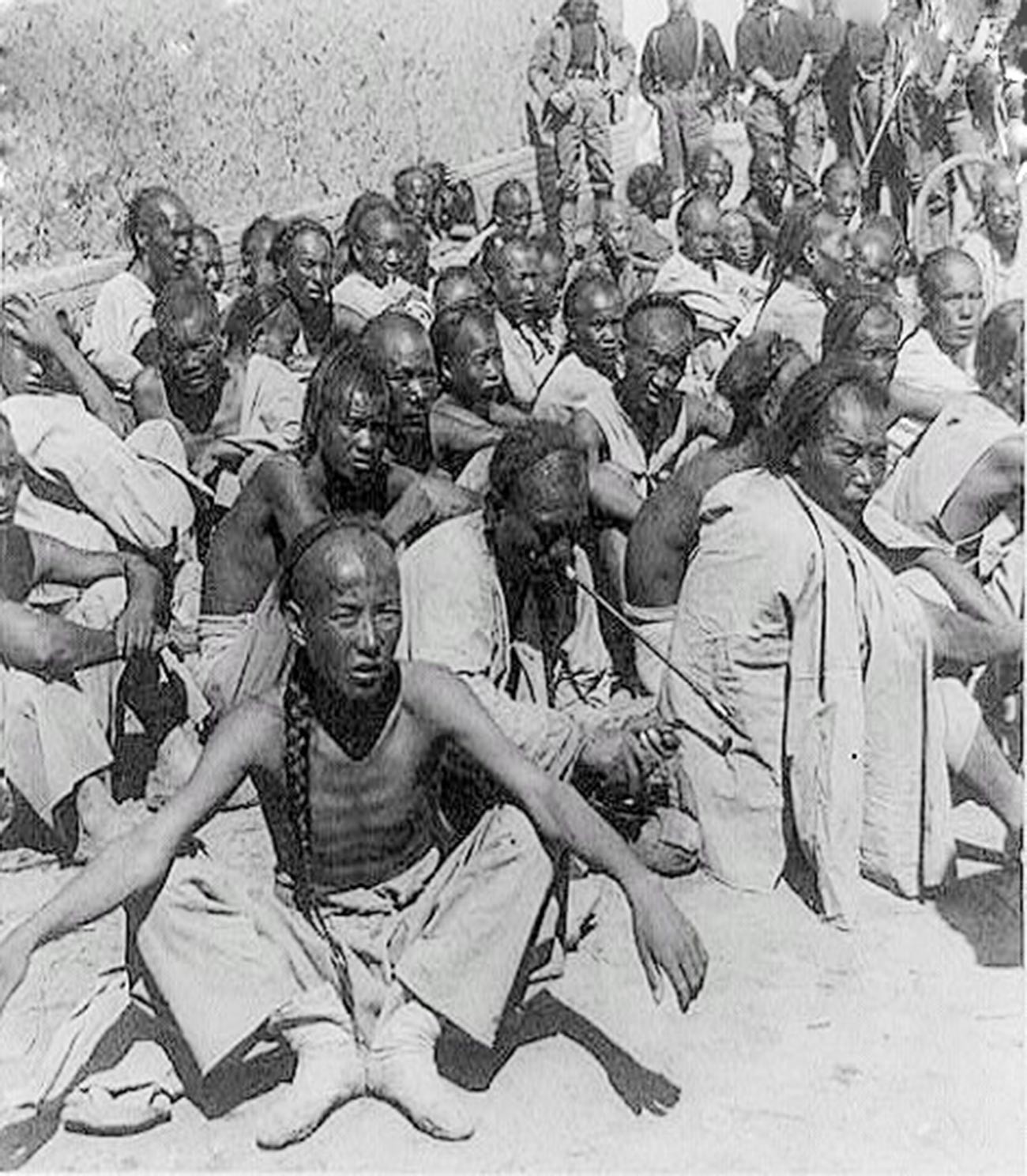 It is not known for sure why members of the organized Chinese gangs operating in Manchuria and Russia’s Primorye region in the second half of the 19th and early 20th centuries were called the Honghuzi. The word hónghúzi translates from Chinese as “red-bearded,” or “red beard”. According to the most common theory, they got the name due to their habit of using fake beards for disguise.

Honghuzi gangs drafted members from among seekers of easy money, deserters from the Qing army, as well as those Chinese immigrants to Manchuria who preferred robbery to hard work in a mine. “Here he is, dirty, in rags, half-starved, laboring every day, in the rain, in clay sticky soil ... what joys in life does he have? ... No wonder he prefers joining the Honghuzi and a life full of adventures,” the newspaper Vladivostok wrote in an 1896 article.

A Honghuzi gang could have from two to several hundred members. To carry out large-scale operations, Honghuzi detachments joined forces, turning into a formidable force that could pose a threat to whole towns. 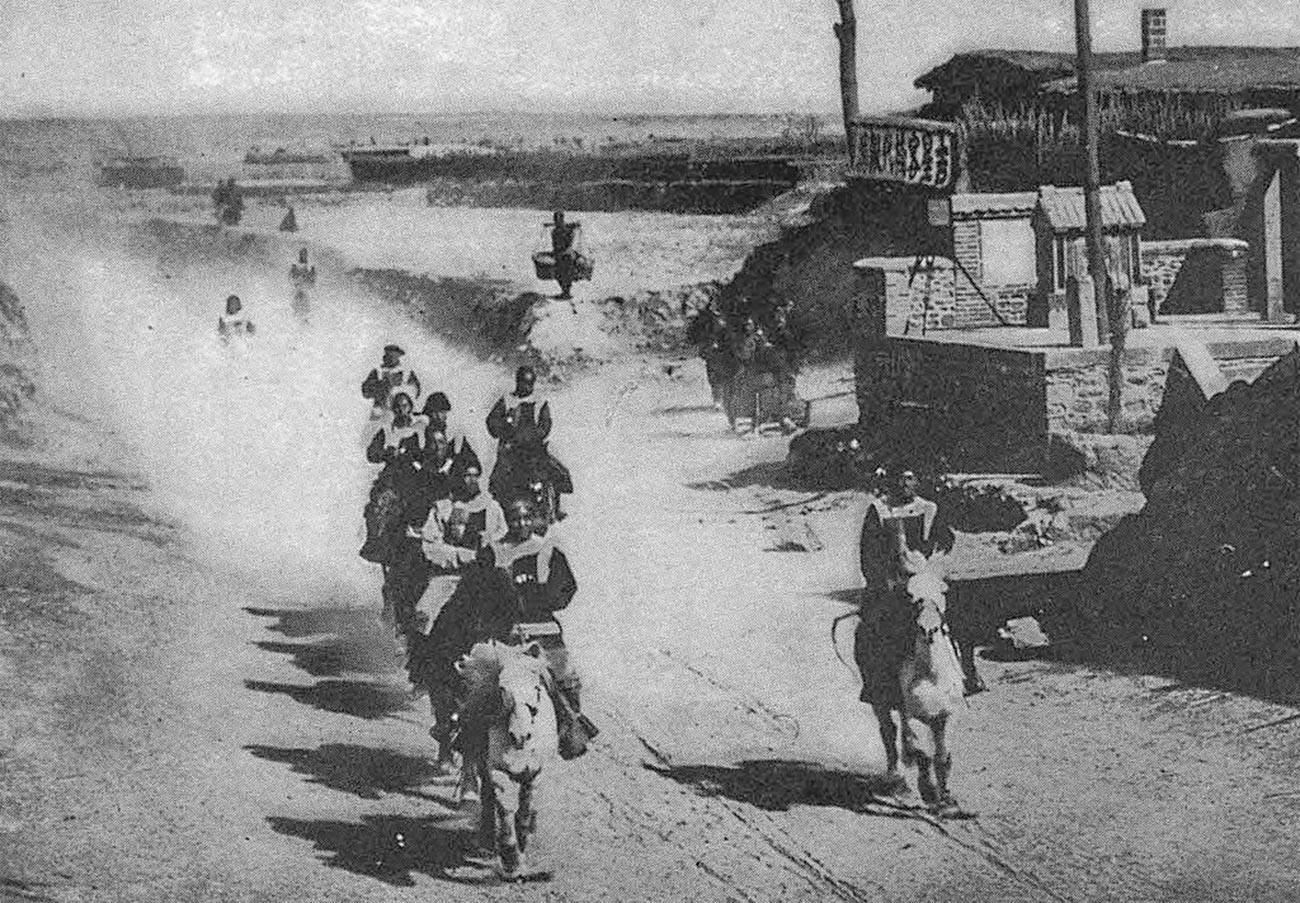 The Honghuzi were by no means unwashed tramps wandering through the forests. They were usually well-dressed and well-armed. Sometimes it was difficult to distinguish a Honghuzi from a merchant.

Swearing an oath of allegiance to each other, members of a gang became 'brothers', unquestioningly obeying their leader. Often, those ringleaders chose vivid, frightening nicknames for themselves. For example, a certain Yang Yulin was called the Fourteenth Lord of Hell.

Usually, the Honghuzi engaged in their criminal activity in spring and summer, when it was easy to hide in the forests. During 'the criminal season', they observed the strictest possible discipline. In autumn and winter they could relax. The 'brothers' went to the cities, where they spent their time in taverns with women, alcohol and opium. One Honghuzi ringleader even performed in a theater during winter breaks. 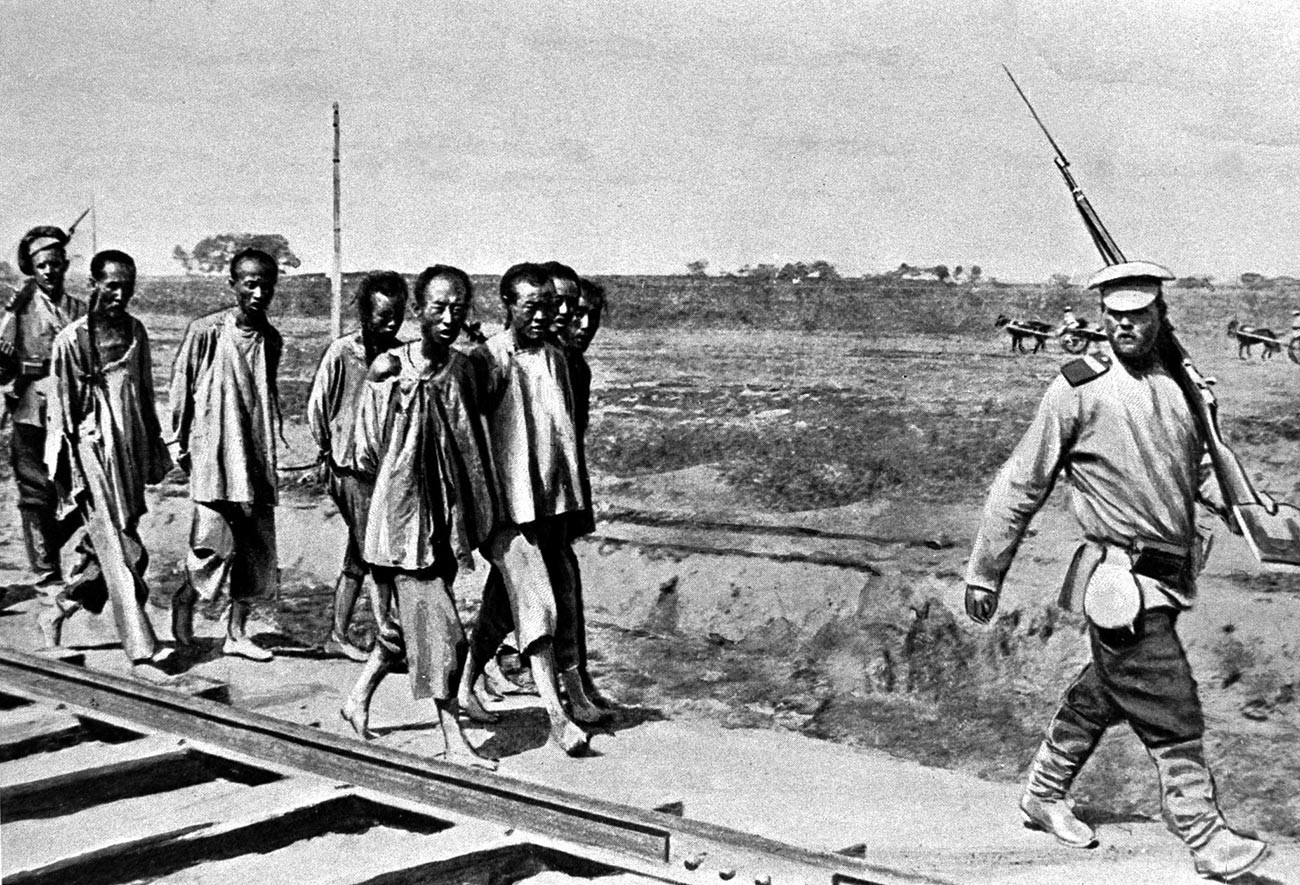 From China to Russia

Manchuria was an ideal place for roaming criminal gangs. The Qing government based in distant Beijing had little control over its sparsely populated land, while local governors did not have sufficient resources to fight the Honghuzi.

Furthermore, the 'Red Beards' did not limit themselves to plundering only Manchurian villages. Nearby lay Russia's vast Ussuri Krai, a poorly colonized region that experienced the same problems as Manchuria.

In those circumstances, there could be no talk of any effective protection of the borders between the Russian and the Qing empires. From their bases on Chinese territory, the Honghuzi easily penetrated into Russian Primorye and just as easily went back home. 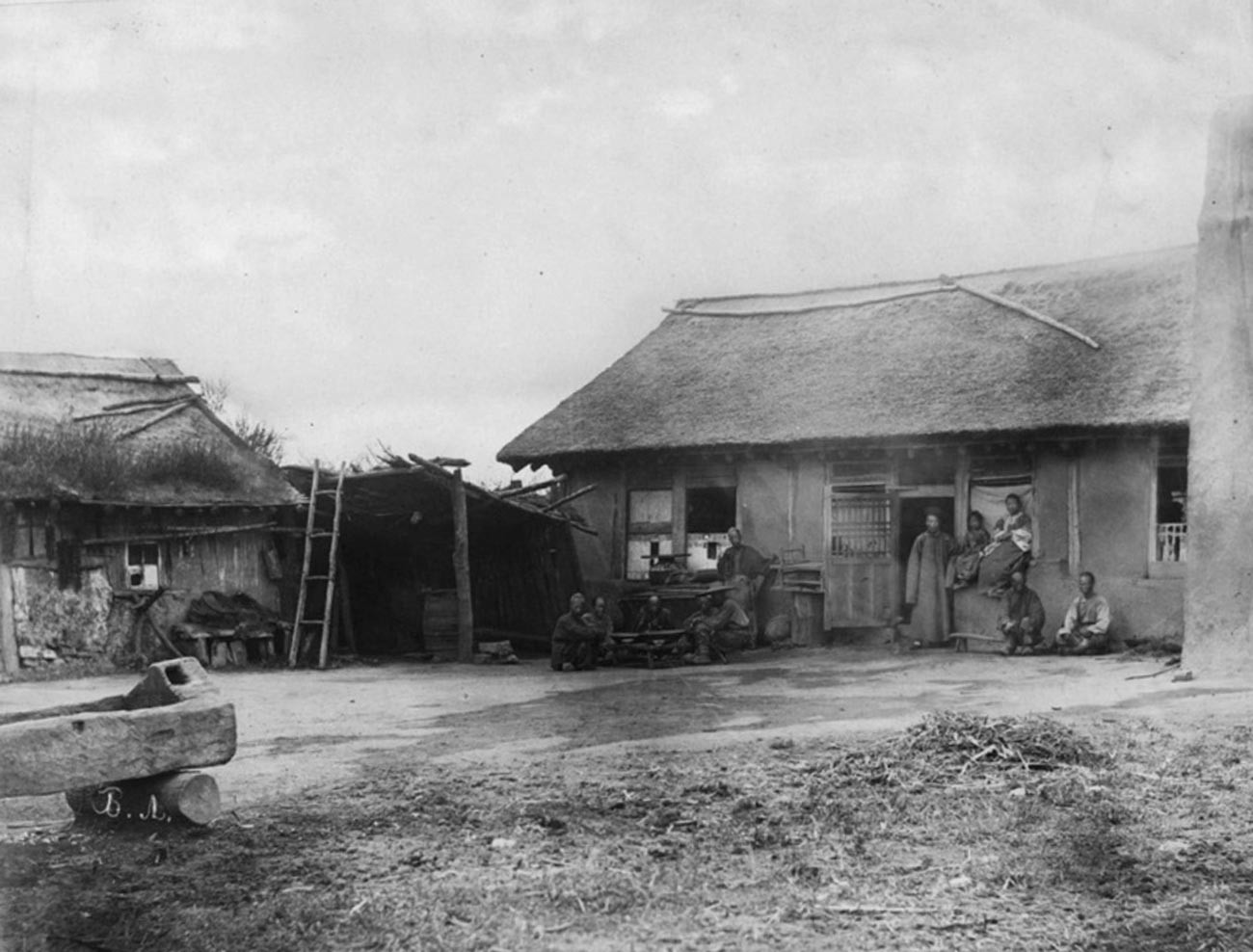 Moreover, sometimes the bandits did not even have to go back to China. The Honghuzi either intimidated the Chinese population of Ussuri (the so-called Manzi), forcing them to help them with food and accommodation, or cooperated with them. Often, the 'brothers' gave the locals money and won their trust, proclaiming themselves fighters for the liberation of the originally Chinese lands that had been seized by Western barbarians.

On Russian territory the Honghuzi engaged in robbery, cattle raiding, opium smuggling and illegal gold mining. It was the latter that led to the first major armed clash between the 'Red Beards' and Russian troops.

The 'brothers' did not always mine gold themselves, but they often protected Chinese miners for a fee. In 1867, gold was discovered on the small island of Askold, 50 kilometers from the military post of Vladivostok (it became a city in 1880). Hundreds of Manzi went there to try their luck together with the Honghuzi. 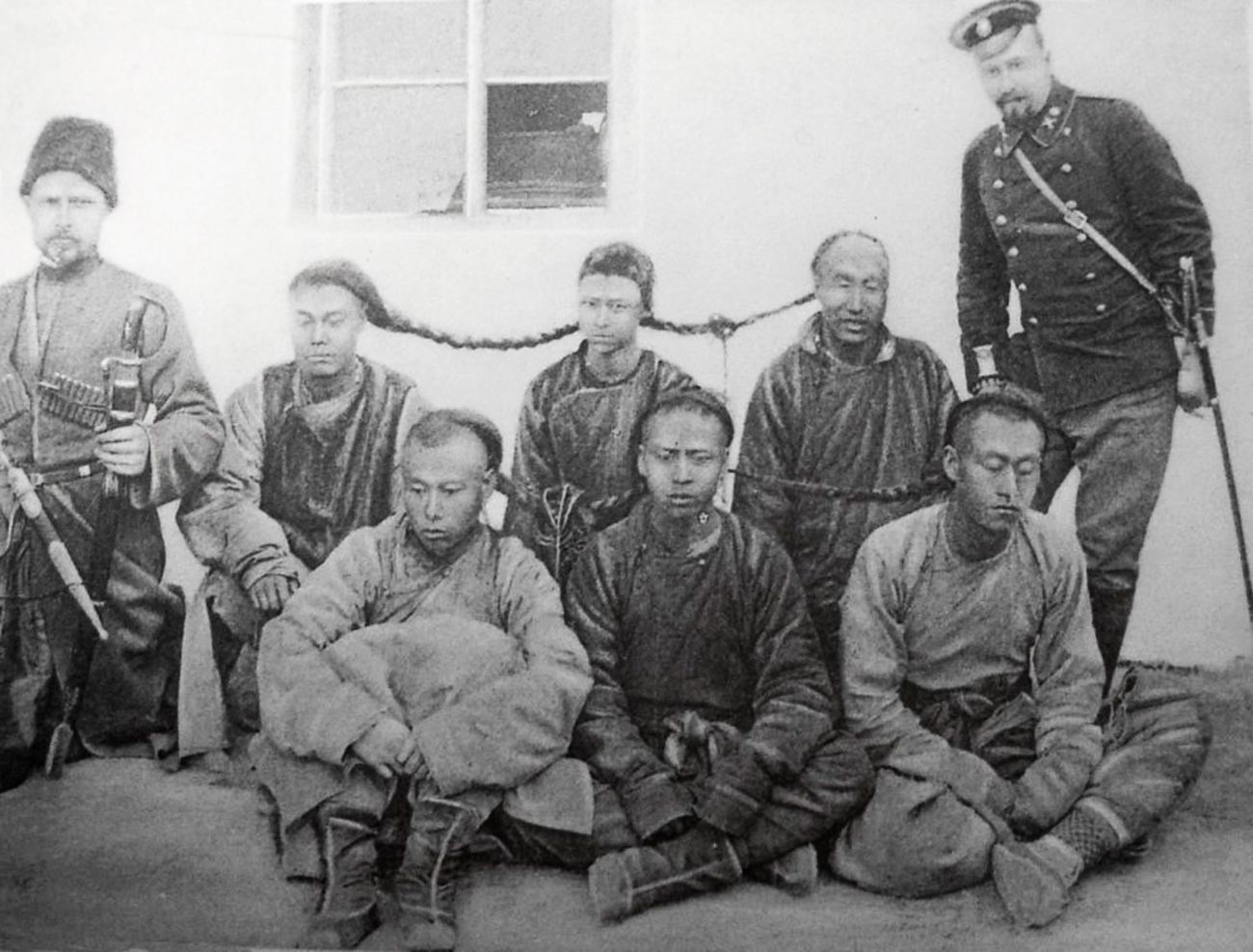 Several times, the crew of the Russian steam schooner Aleut scattered the illegal gold miners, but they returned again. In the end, three sailors were killed in an armed clash. The Honghuzi demonstratively chopped their bodies to pieces in full view of the remaining crew of the Russian ship that hastily sailed away.

Attempts by the Russian government to put an end to illegal mining ended up in a series of skirmishes known as the Manzi War. In the spring and summer of 1868, the Manzi and the Honghuzi attacked military posts, plundered and burned several villages and massacred the peasant families living there. In retaliation, Russian troops burned down several Manzi settlements that provided shelter for the Honghuzi. By mid-July, the gangs were either liquidated or driven back to Manchuria. 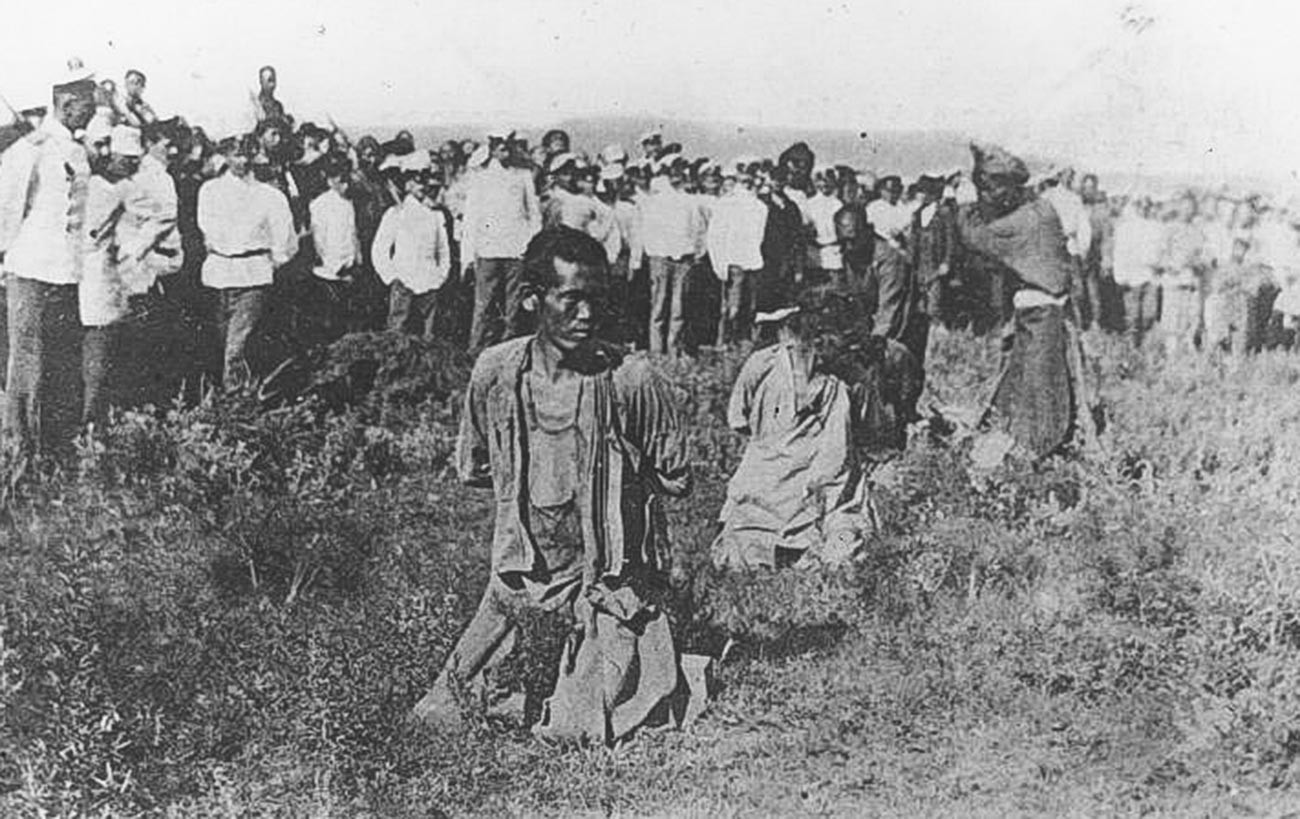 The fact that the Honghuzi, having done their robbing and plundering on Russian territory, returned to China was a source of great annoyance for the Russian authorities. More than once, the troops pursuing the bandits were forced to stop at the border.

However, that was not always the case. Sometimes Cossack detachments, unknowingly or deliberately, penetrated into Chinese territory. Once an Ussuri Cossack squadron in pursuit of the 'Red Beards' covered a distance of several hundred kilometers across Manchuria.

In 1879, Russian troops deliberately entered Chinese territory and burned down a well-fortified Honghuzi fortress near Lake Khanka. Sometimes those raids did not go unnoticed. That same year, having crossed the border, Major Nozhin's detachment came across Qing government troops, which resulted in a small battle. The Russian Ministry of Foreign Affairs had to apologize for the incident. 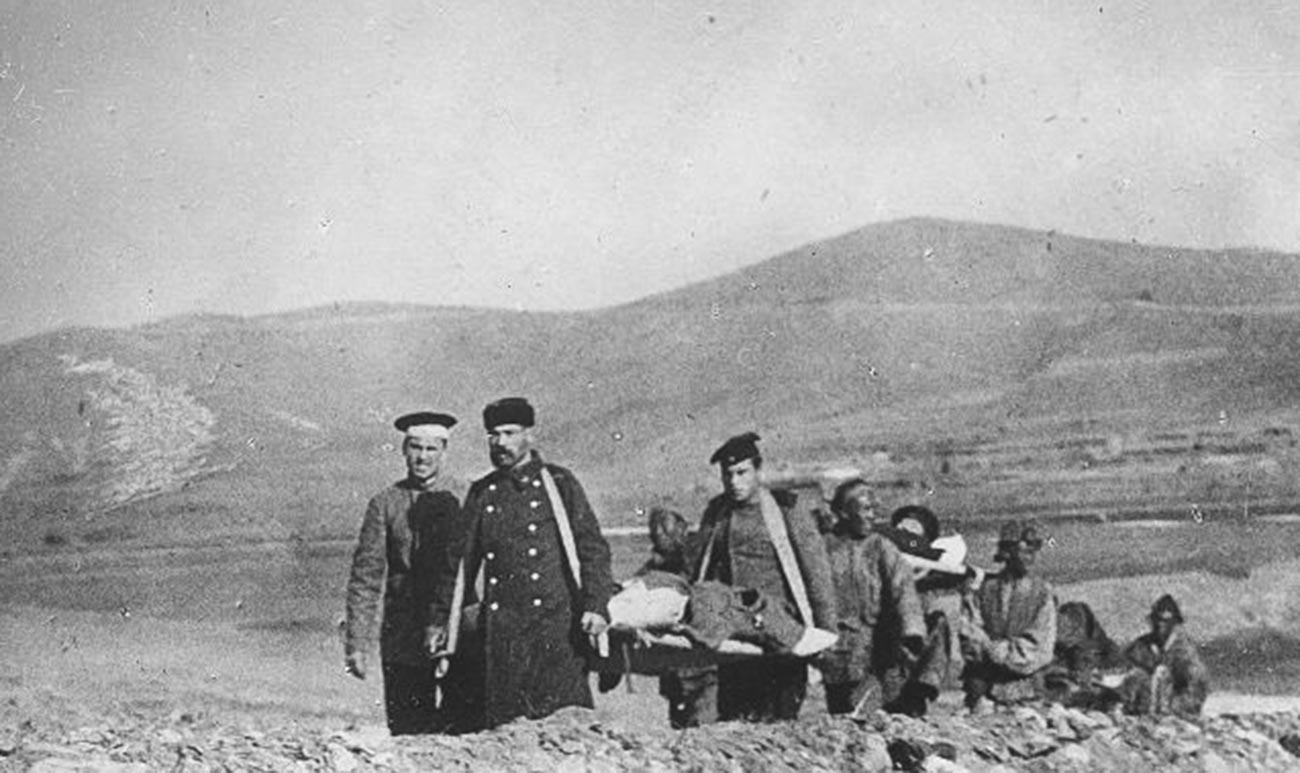 Although Beijing always expressed displeasure at those violations of the state border, for the local authorities the problem of the Honghuzi was much more pressing. Often, local governors themselves asked the Russians to continue pursuing the bandits in their provinces.

In the early 20th century, the Russian Far East and China became the scene of important historical events, which the 'Red Beards' could not ignore. During the Yihetuan (Boxer) Uprising of 1899-1901, which fought against domination by Western powers, the Honghuzi often joined forces with the remnants of the defeated Qing detachments and fought against Russian troops. Despite their known status as robbers, many Chinese people saw them as the last defenders of their homeland against foreign aggression. 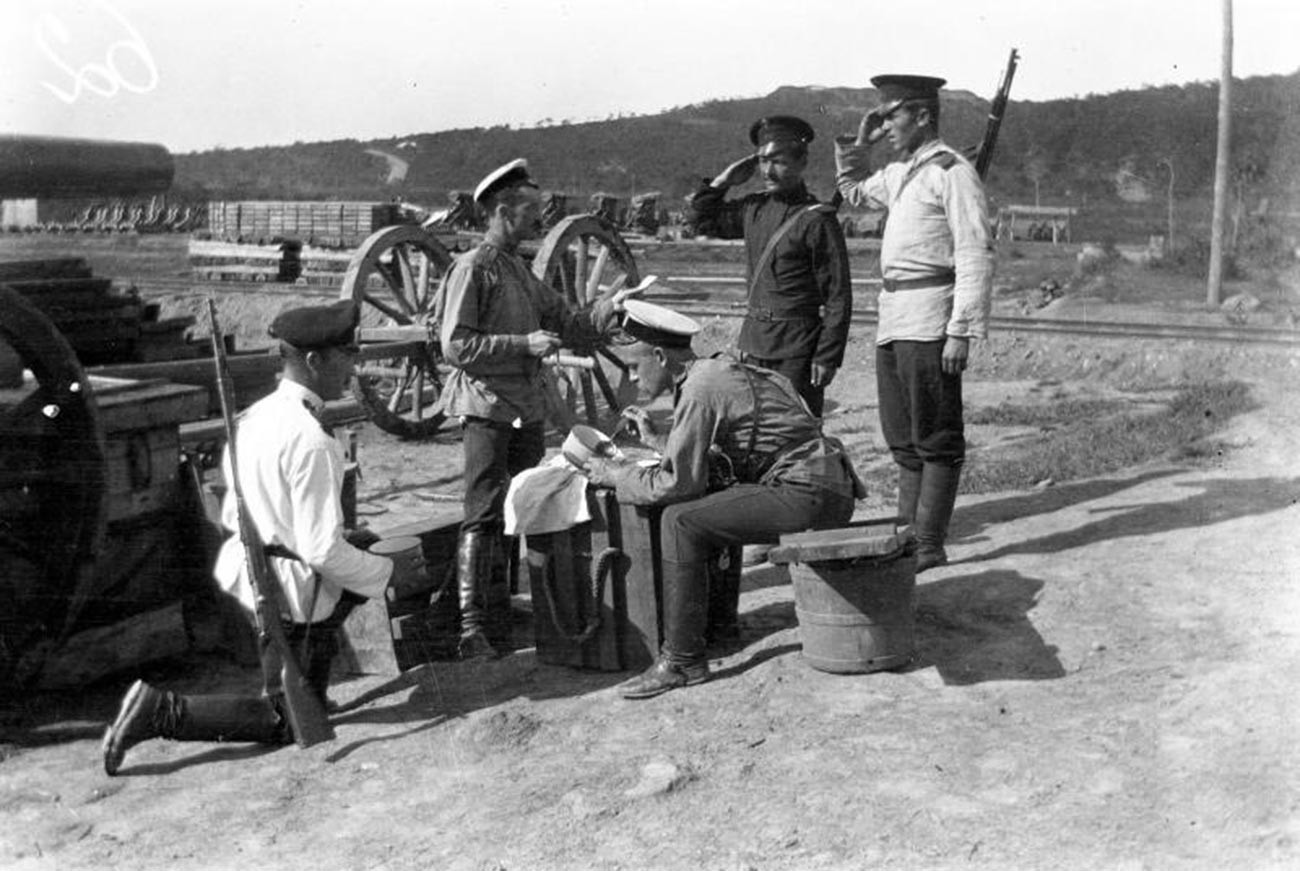 During the Russo-Japanese War of 1904-1905, the 'brothers' managed to serve both the Russians and the Japanese for a fee. In particular, they were entrusted with carrying out acts of sabotage on the Chinese Eastern Railway in Manchuria. Commissioned by the Chinese government and built by Russia, the railway was the main source of supply for Russian troops in the Far East. Of the 512 attempts undertaken by the Honghuzi during the entire conflict, only one was a major success: on January 31, 1904, part of a bridge north of the Gongzhuling station was blown up.

The collapse of the Chinese Empire in 1911 and of the Russian Empire in 1917 brought turmoil and chaos to the Far East, in which the Honghuzi found themselves in their element. During the Russian Civil War, they continued to rob the local population, from time to time joining either the White or the Red Armies as mercenaries, or the Japanese, when they landed in Vladivostok in April 1918.

In China, which was going through a period of discord and struggle between different military and political factions, the Honghuzi reached unprecedented heights. A former 'Red Beards' ringleader, Zhang Zuolin, became not only the de facto ruler of Manchuria, but until June 1928 he ruled the whole of China. He also appointed another 'brother', Zhang Zongchang, who with his bandit detachment served Russia during the Russo-Japanese war, as the governor of Shandong province. 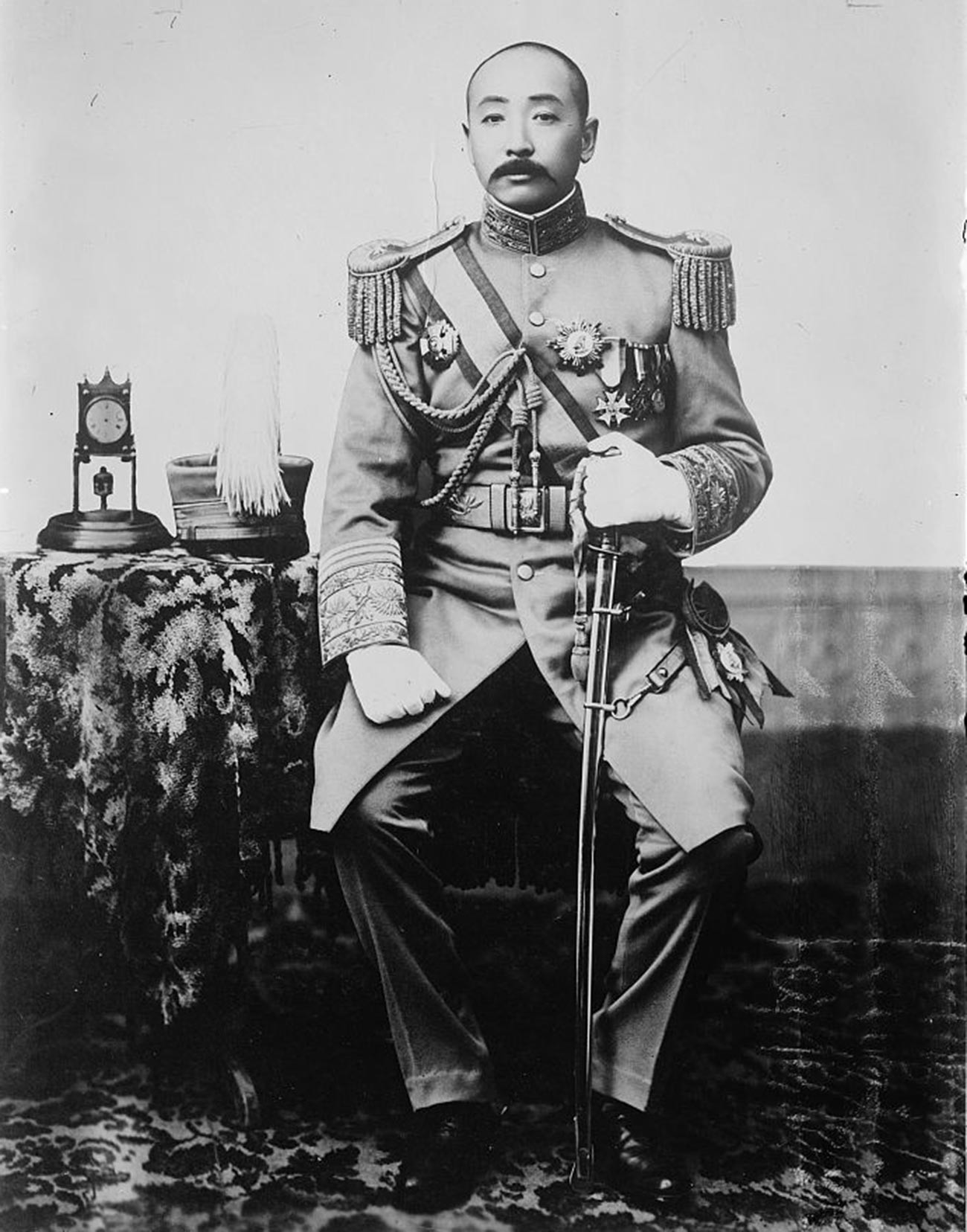 In the 1930s, the era of the Honghuzi began to decline. The Soviet government significantly strengthened the protection of state borders with China and clamped down on criminal activity in Primorye. A significant contribution to the fight against the 'Red Beards' was made by the Japanese, who in 1928 killed Zhang Zuolin and three years later captured Manchuria. By the early 1940s, the 'brothers' no longer played any significant part in the life of the Far East.