The first Russian to cycle the globe 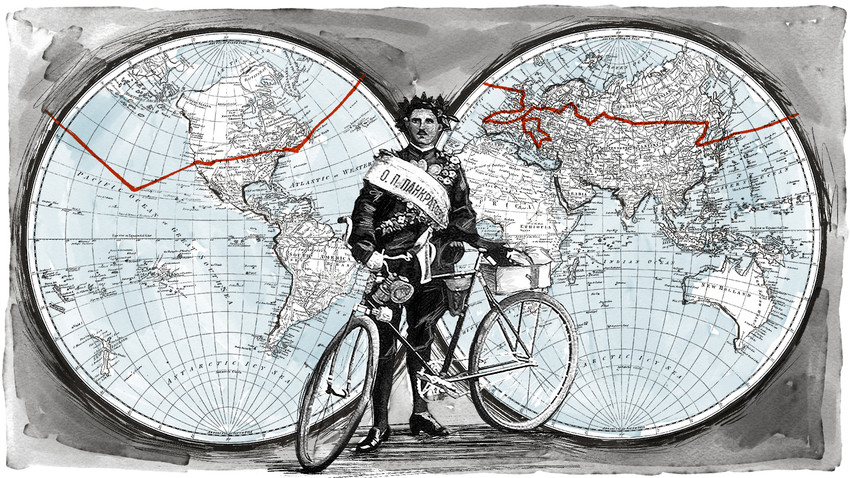 Irina Baranova, Archive photo
Unimaginable exertion, amazing success and a tragic death – the life of Onisim Pankratov, the first Russian to cycle around the world, had it all.

Without speaking a word of any foreign language, carrying neither a weapon nor a diplomatic passport, Onisim Pankratov traveled through dozens of countries, spent time in prison and in hospital, but still managed to achieve his goal – to cycle around the world. His next goal was to fly around the world – but his life was cut short by World War I. Onisim’s inspiration came from his father, who was very passionate about the project.

Onisim Pankratov was born in the Penza province in 1888. He came from a well-off peasant family, who had enough funds to send him to a grammar school. In 1896, when Onisim was still a schoolboy, his father, Pyotr Pankratov, read in a newspaper that the International Cycling Association had promised a diamond palm branch to the first cyclist to travel around Europe along a route proposed by the Association. Pyotr loved sports and was a fan of the famous wrestler Ivan Poddubny, so he brought up his son to love physical exercise from early childhood. Yet, realizing the dream of traveling around the world was still a long way off.

In 1908, the Pankratovs moved to Harbin (no records have survived as to why they decided to move.) In Harbin Onisim, who had grown into a very strong young man, “headed all local sports organizations and became particularly famous as the brave leader of the Harbin volunteer fire brigade”, the ‘Utro Rossii’ newspaper wrote about him.

By 1911, having saved enough money to buy his own Gritzner lightweight road bicycle, Pankratov, who by that time had been practicing cycling on a Harbin track, began to prepare for a round-the-world cycling adventure. Initially, it was not planned to be a solo trip: together with Pankratov, three other cyclists left Harbin for Moscow on July 10, 1911 - Voroninov, Sorokin, and Zeiberg. However, his two partners soon had to abandon the journey, owing to their lack of fitness to complete it. Starting from the town of Chita, Pankratov continued the trip alone.

Cycling away from dogs and bandits 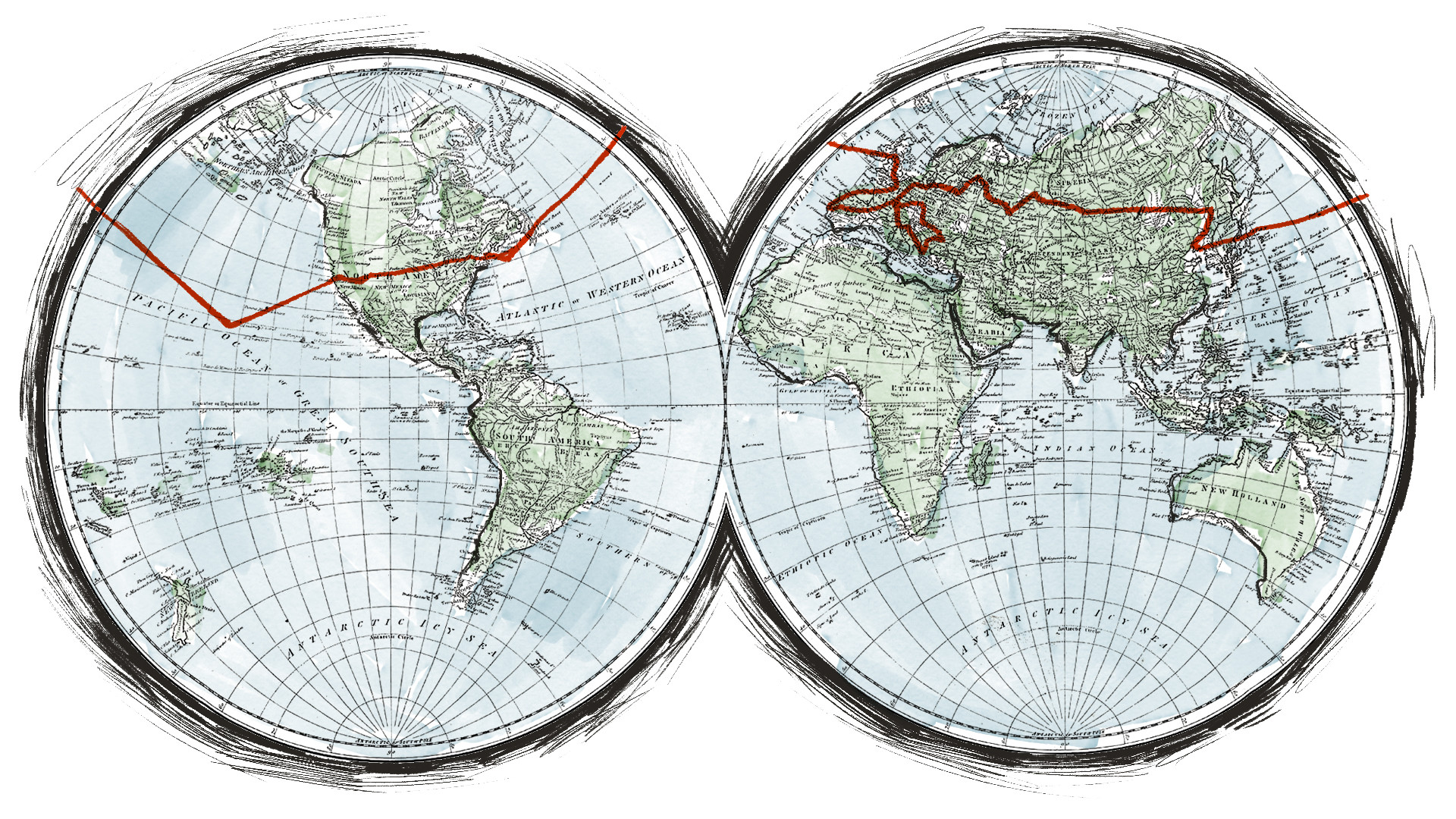 “While I was cycling through Mongolia and Manchuria”, Utro Rossii cited Pankratov as recalling, “I was met with the most cordial attitude from the local population, mainly Buryats and Mongols. They fed me splendidly and had it not been for the lack of bread, which is hard to find in those parts, the leg of the trip that went through Chinese territories would have been extremely pleasant in all respects. However, the minute I entered Russian lands, my journey was filled with all kinds of adventures and ordeals."

Pankratov had a travel journal, where he entered notes about his trip. Siberian peasants were suspicious of any literate person, let alone one riding a bicycle. The only thing that could keep them in check were official stamps and seals bearing the two-headed eagle insignia. That is why Pankratov asked any officials whom he met along the way - and to whom he explained the purpose of his trip - to stamp his travel journal. However, that didn’t stop him from nearly getting killed on several occasions. 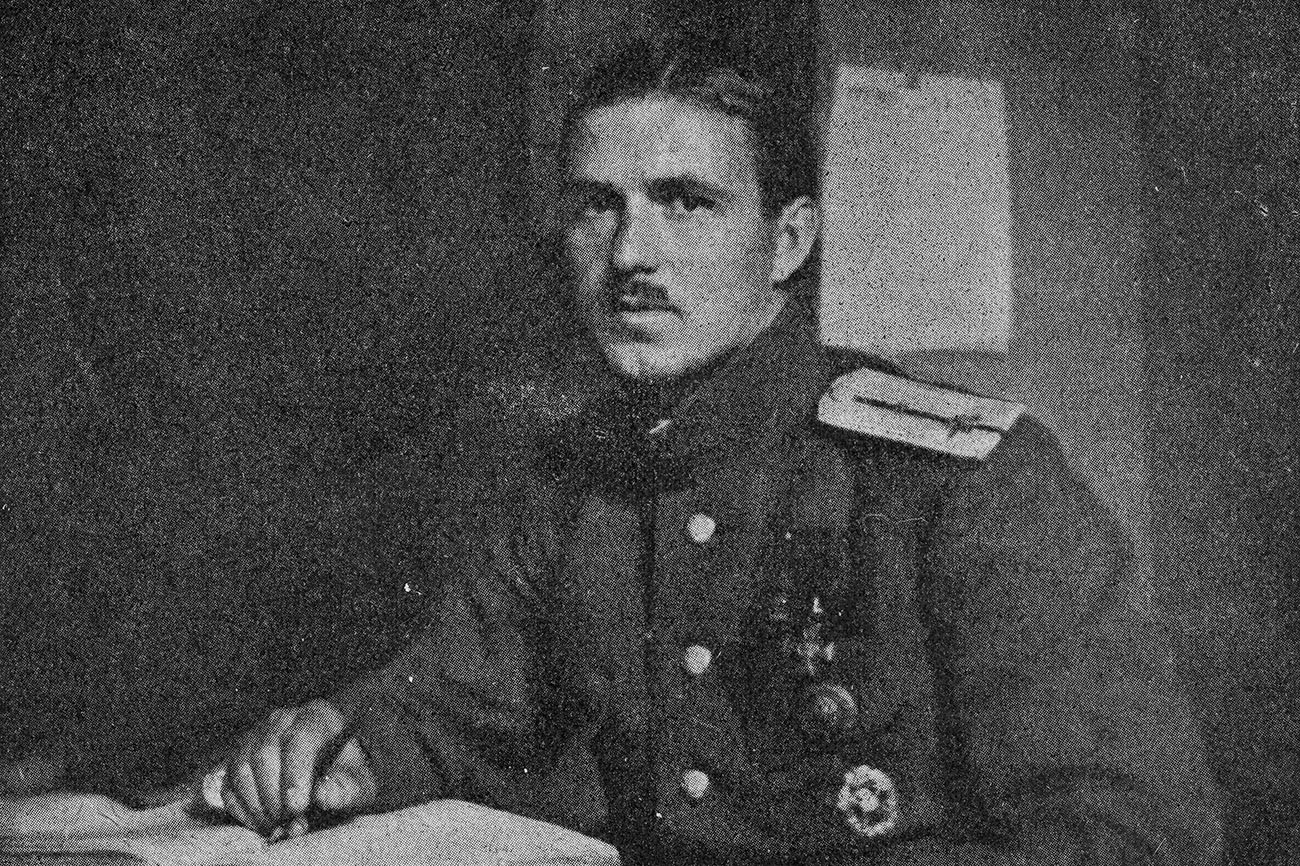 Onisim Pankratov as a pilot

Once, he recalled, some hunters decided to use him as live target practice: he received a light wound to his back. In Krasnoyarsk Region, he was attacked by bandits, but they let him go, since Pankratov had no money on him, and seizing the bicycle from him made no sense since it was impossible to find anyone to sell it to. Since there were no roads in some parts of Siberia, Pankratov often had to cycle along railway tracks, where he was pursued and driven away by railway workers, resulting in him having to travel at night.

Despite all this, already by mid-November, Onisim Pankratov reached Moscow, where he received an enthusiastic welcome from Moscow cyclists, who provided him with food, medical treatment, and even raised money to help him continue his journey. 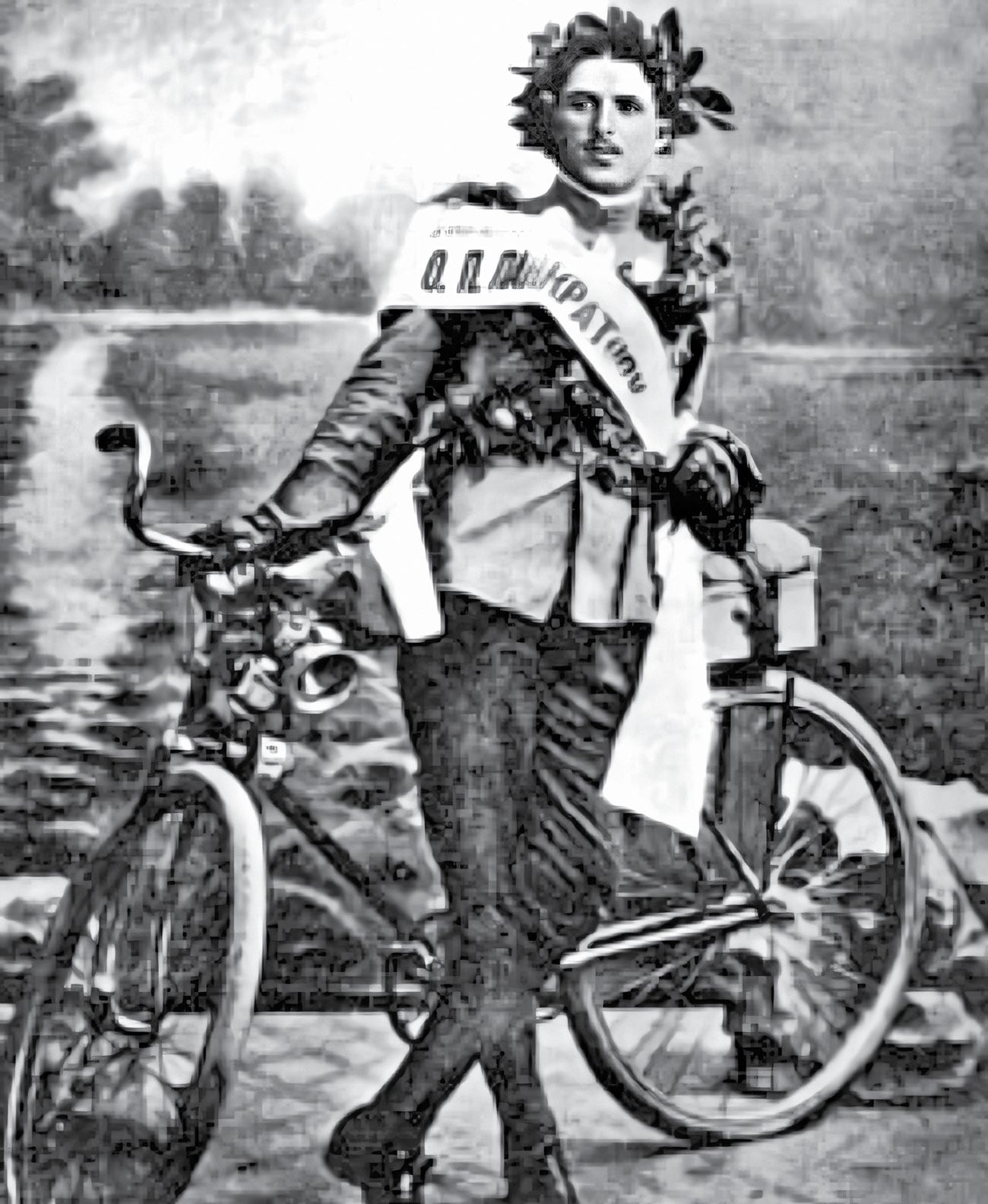 Onisim Pankratov on the day of his arrival back to Harbin

Via Petersburg, Onisim Pankratov reached Konigsberg (today Kaliningrad) and, from there, Berlin. He crossed the border of the Russian Empire on December 12, 1912. In Europe, Onisim discovered that the route advertised in an 1896 newspaper had long been completed by other cyclists. Nevertheless, Pankratov did not give up his project and continued on the European leg of the journey. Furthermore, instead of cycling across it, he adopted a more elaborate route, most likely, repeating the 'challenge' originally set by the International Cycling Federation: Switzerland, Italy, Serbia, Turkey, Greece, Turkey again, Italy, France, southern Spain, Portugal, northern Spain and France again. From there, he took a steamer to England, where, in order to save money for a ticket to the United States, Pankratov worked as a port loader.

The European leg of the journey was not a walk in the park either: in Turkey, he was detained by the police, who mistook him for a Russian spy, while in Italy, he fell ill with malaria. It was in Italy that Pankratov resorted to the help of Ekaterina Peshkova, the official wife of the writer Maxim Gorky, who was then living there: she must have put him in contact with Russian emigrants in England, who rescued Pankratov from dying of hunger. While in England, he took part in cycling competitions and wrestling matches – naturally, for a fee. In the end, Pankratov and his Gritzner boarded a steamer to America.

Very little is known about Pankratov's stay in the United States. There is only his quote that the journey through America was even more uncomfortable than the one through Russia: "You are cycling along a road, approaching a farm, you want to take some rest there, but you are met with a rifle at the ready, and with loaded Colts..."

From San Francisco, Pankratov went to Japan, from there to China, and on August 10, 1913, after two years and 18 days on the road, he returned to Harbin. During the journey, he changed 52 tires, 36 inner tubes, nine chains, eight pedals, four saddles, two handlebars, numerous lights, bells, and other parts on his bike.

Death in the air 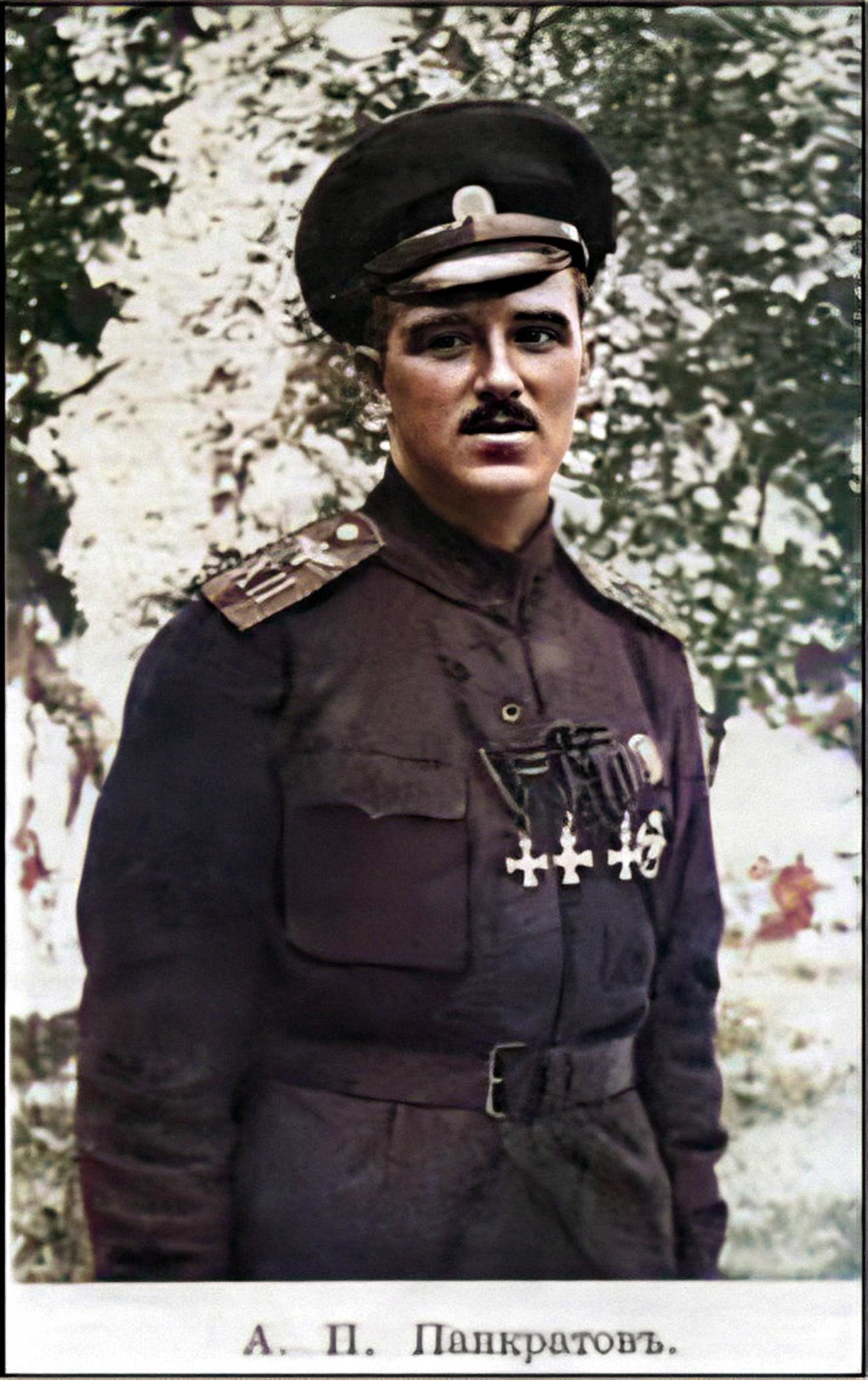 Onisim Pankratov in the uniform of the 12th Corps Air Detachment, with all three St. George crosses

Needless to say, after completing his journey, Pankratov became a national celebrity. Newspapers and magazines wrote articles about him, and he was never short of funds. Yet, Onisim's craving for new adventures did not become any less - according to archival documents, in June 1914, Pankratov joined a military aviation school in Gatchina. Already in August, he was granted the right to fly a Farman aircraft, and was assigned to the 12th Corps Air Detachment - World War I was already underway...

Amazingly, Pankratov proved a great success in the sky too. In those days, when planes were unreliable and pilots and their trainers had little experience, Pankratov moved from one aviation squadron to another, changed four duty stations, and, in November 1914, his plane was shot down But, amazingly, Pankratov had survived. While not yet an officer, he was awarded St. George Crosses of the 4th, 3rd and 2nd classes, and a St. George Medal, which were awarded to soldiers for exceptional bravery in battle. In 1915, Pankratov was promoted to the rank of ensign. 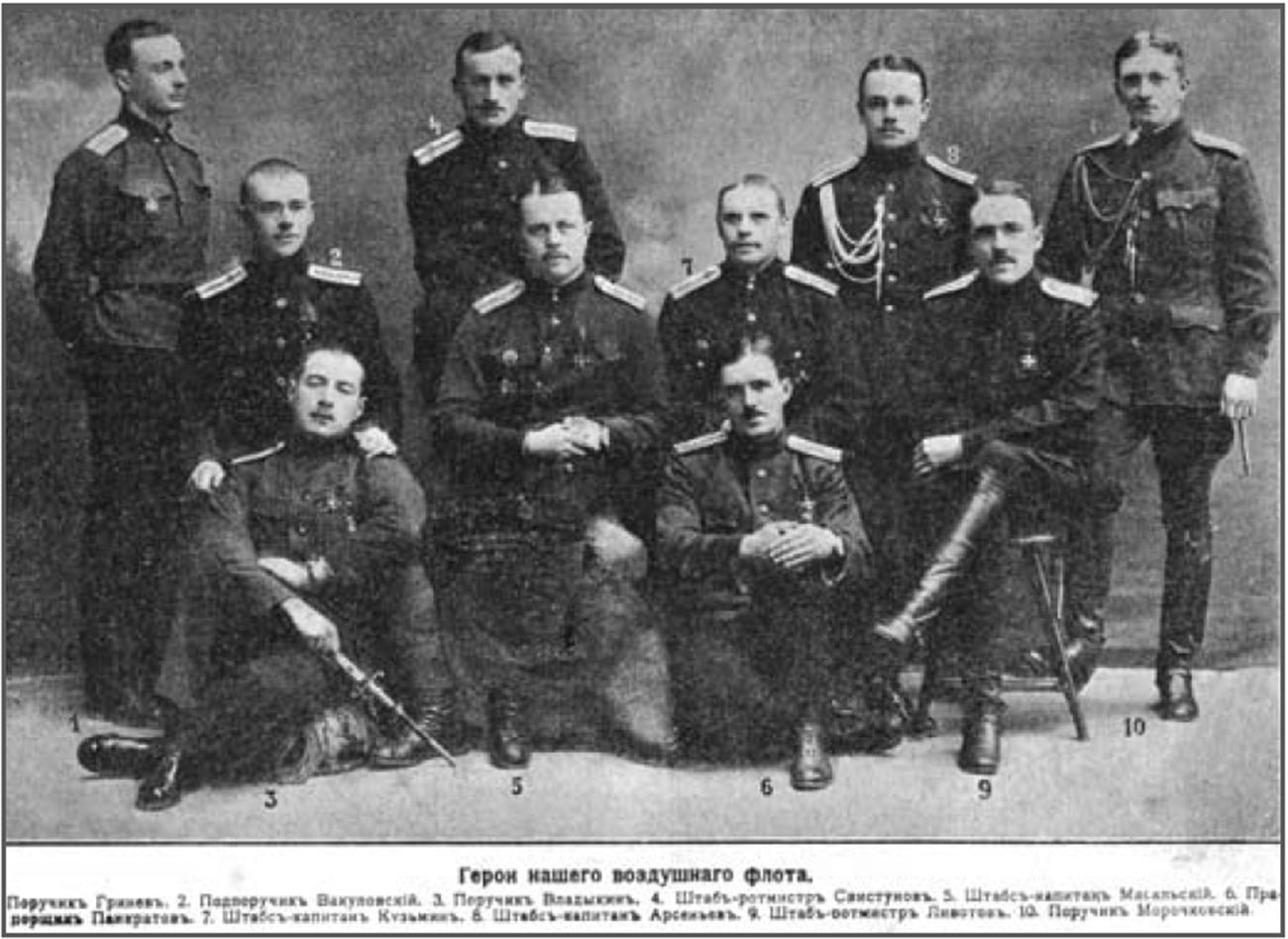 A photo of Russian hero pilots. Onisim Pankratov can be seen in the front row (center), seated on the floor

In July 1916, he joined a fighter squadron. A month later, while on a combat mission near Dvinsk - this time Pankratov served as a gunner on a plane, steered by a French pilot, Henri Laurent - he was killed: their plane was shot down and crashed.

Clearly, Onisim Pankratov was very well-known in the armed forces. Back when he was serving in the 12th Corps Air Detachment, he was written about in newspapers as one of the "air force heroes". He was posthumously awarded the Order of St. George 4th class, and the following year, also posthumously, the Order of St. Anna 4th class (on January 3, 1917) and the Order of St. Stanislaus 3rd class with swords and a bow (on May 12, 1917). However, Russians remember Onisim Pankratov not so much for his military as for his sporting achievements, as the first Russian to cycle around the world.