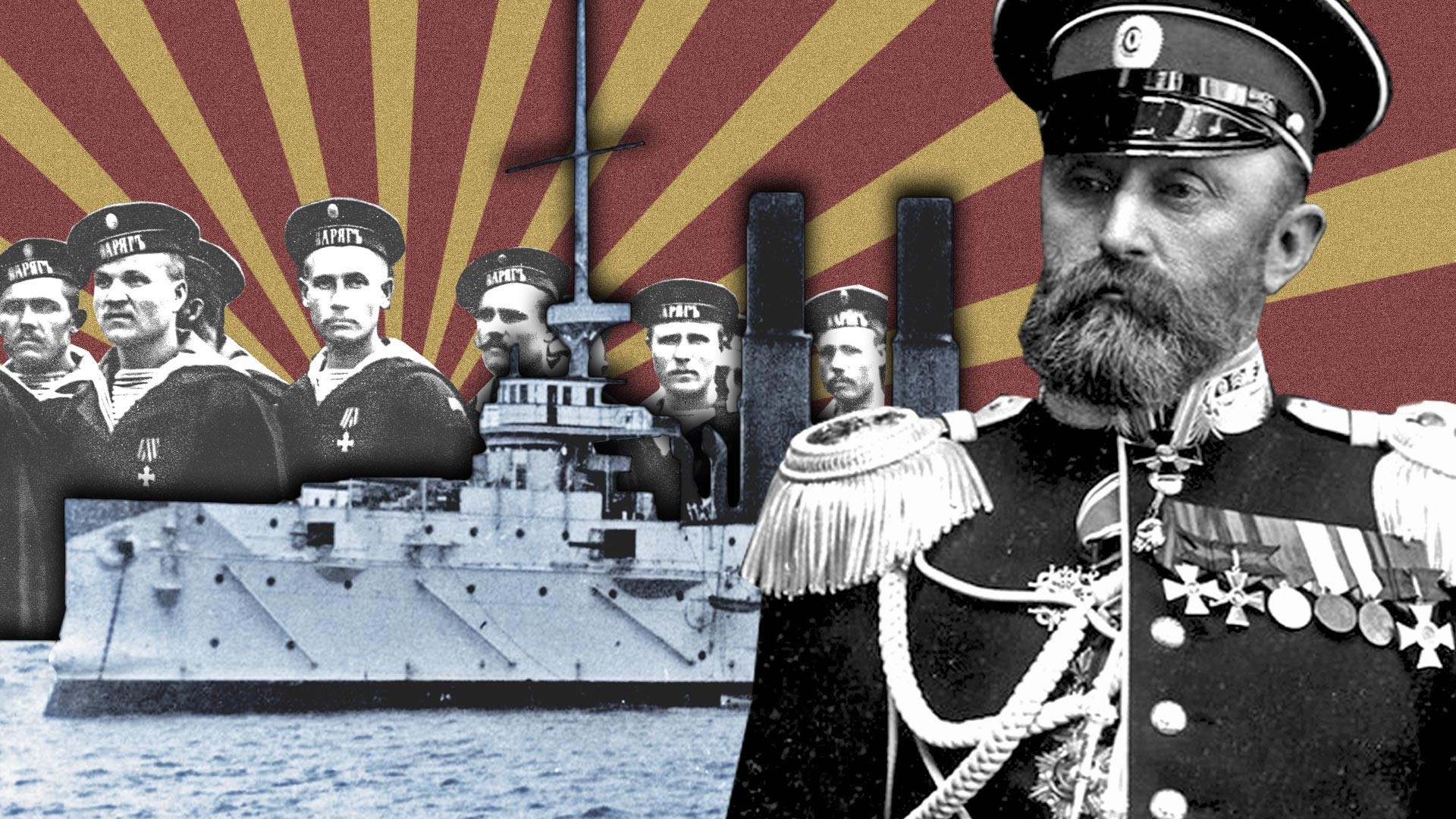 Karl Bulla, Viktor Bulla, Public Domain, Russia Beyond
The bravery and courage of Russian soldiers and sailors during the 1904-1905 Russo-Japanese War could not compensate for the incompetence of the military command and the shortsightedness of the Russian imperial leadership. The latter eventually led the country to a bitter defeat.

The war promised to be a walk in the park for the Russian Army, but ended in total disaster. The defeat provoked such an outcry in Russian society that it was one of the main causes of the so-called First Russian Revolution of 1905-1907 that engulfed the entire territory of the Empire. The Russian state’s international prestige also fell significantly. Thus, China, which had always perceived its northern neighbour with apprehension, began to look at it with scorn and to regard it as a ‘paper dragon’.

And yet, despite the failed war, in which the tsarist army and navy didn’t win a single major battle, a number of heroic exploits by Russian soldiers and sailors were still recorded. Here are the most outstanding of them.

1. The heroic action of the Varyag 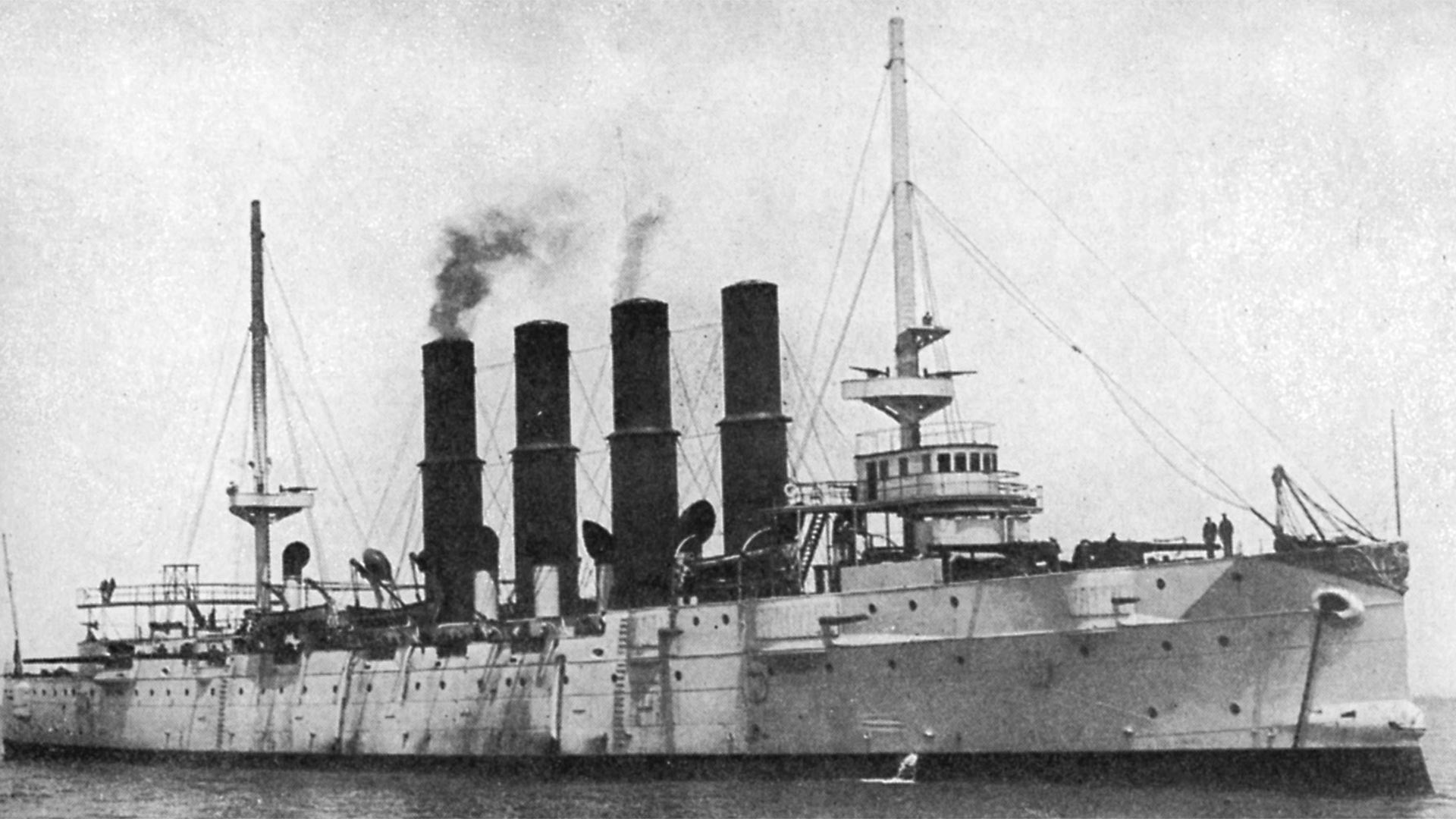 At the very beginning of the war, on February 9, 1904, a Japanese squadron of 14 cruisers and destroyers blockaded the neutral Korean port in Chemulpo Bay (present-day Incheon), where the Russian protected Varyag cruiser and Korietz gunboat found themselves at the time.

The captain of the Varyag, Vsevolod Rudnev, rejected Admiral Uryū Sotokichi’s ultimatum to surrender immediately and decided to fight his way to the Russian naval base at Port Arthur (on the territory of present-day Dalian, China). As a last resort, the plan was to scupper both vessels.

The crews of neutral countries’ ships in Chemulpo Bay lined up on their decks to cheer in tribute to the Russian sailors going into battle. “We salute these heroes facing certain death with such dignity,” French Captain Sénès said at the time. 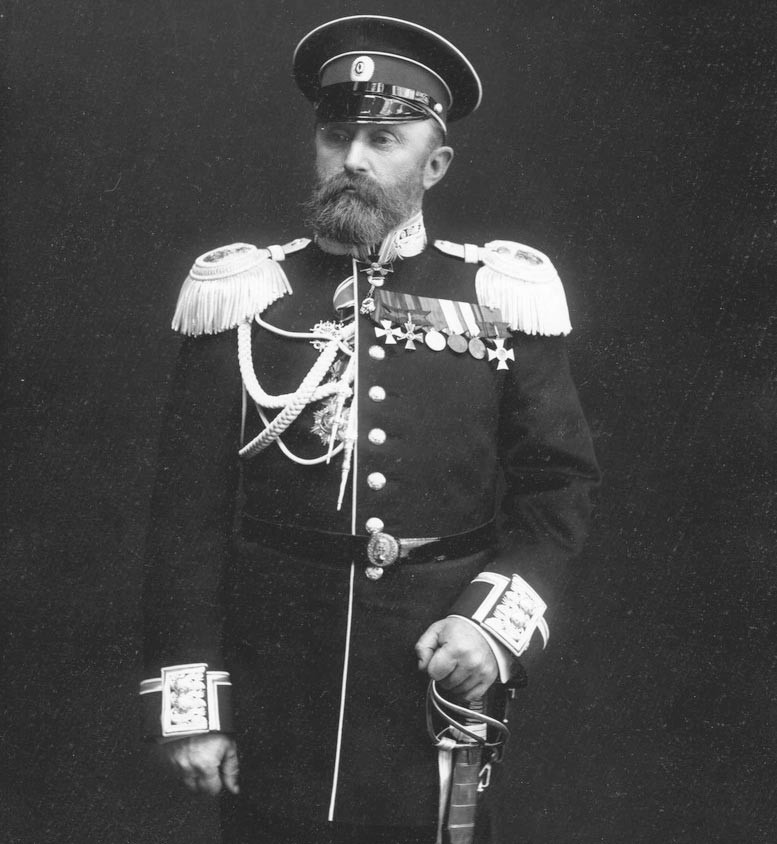 The unequal battle with the Japanese went on for three hours. After the Varyag was badly damaged and lost about 40 crew members, the decision was taken to evacuate to neutral ships and scuttle the Russian vessels.

In his subsequent report, Captain Rudnev said that the Japanese had lost several of their own ships, but this was not confirmed either by neutral observers or the Japanese themselves. Nevertheless, the Varyag’s desperate feat was held in high regard by the Japanese foe. After the war, in 1907, Emperor Meiji awarded Rudnev the Order of the Rising Sun, 2nd Class, in acknowledgment of the heroism of the Russian sailors. The captain accepted the order, but he never wore it.

2. The last battle of the Steregushchy 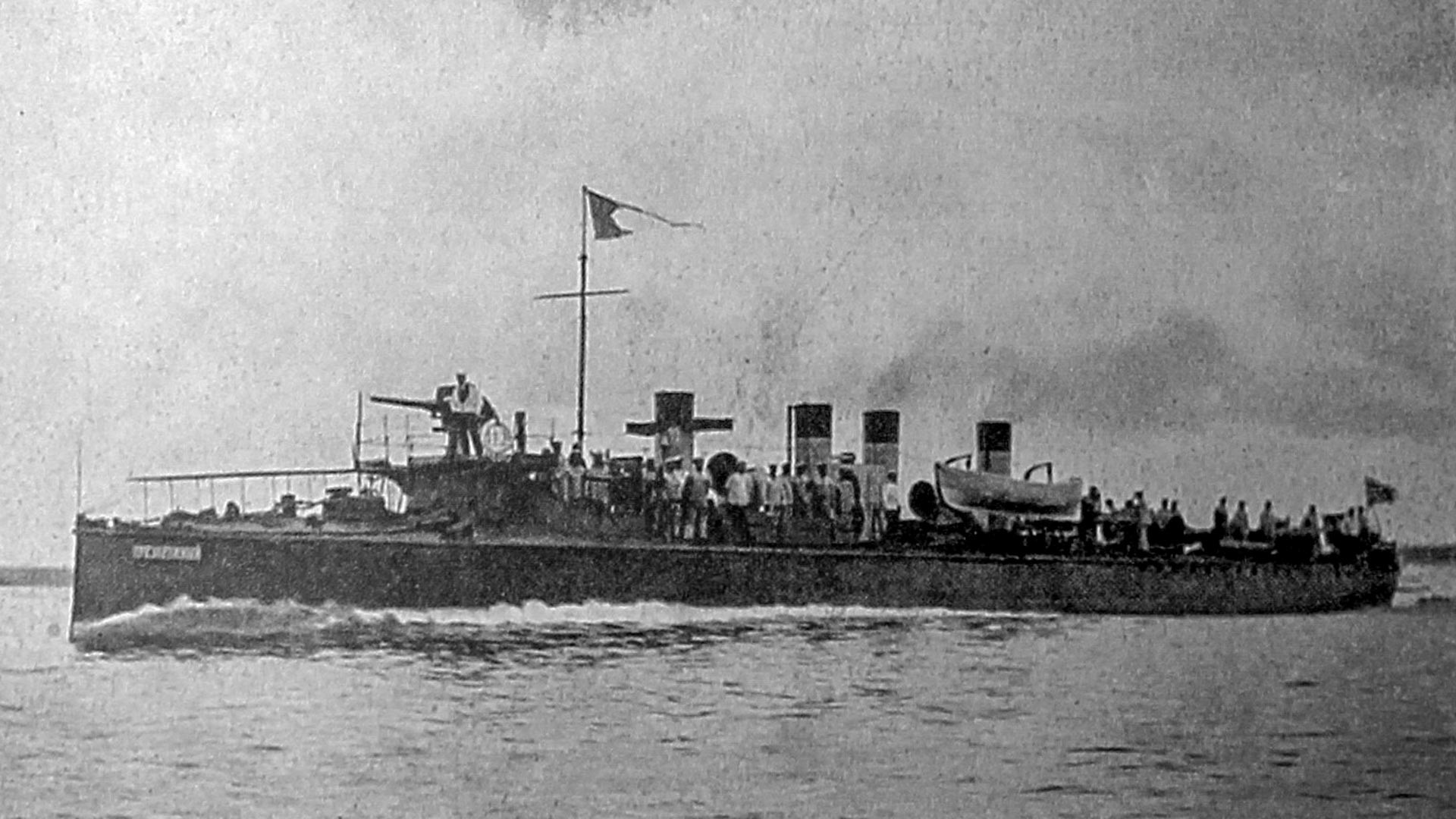 When at dawn on March 10, 1904, two Russian destroyers, the Reshitelny and the Steregushchy, were returning to Port Arthur after a reconnaissance mission, their path towards shore was suddenly blocked by a Japanese naval squadron of four destroyers and two cruisers.

Reshitelnyy managed to break away and head back to base, but Steregushchy was forced to give battle. The ship was literally showered with shells. One of them damaged the ship’s boiler plant, immobilizing the destroyer and robbing it of its last chance of making a break for safety.

Despite being battered to smithereens like a target ship in a firing exercise, the Steregushchy’s crew had no intention of surrendering. It was only when all of the Russian ship’s guns had fallen silent that the Japanese stopped firing, and dispatched launches to board it. The battle had been no picnic for them: The destroyer Akebono alone had incurred around 30 hits, and the casualties included dead and injured.

Coming on board, the Japanese sailors were greeted by a gruesome sight. Of the 49-man crew, only four were still alive. “The foremast had fallen to starboard,” recalled midshipman Hitara Yamazaki. “The bridge was smashed to pieces. The whole of the for’ard half of the ship was in a state of total devastation, with scattered fragments of objects. Around 20 bodies were strewn around the space before the fore funnel. The bodies were mutilated - partly torsos without limbs and partly severed legs and arms. The horrifying scene included what looked like the body of an officer, for a pair of binoculars was draped round his neck…”

The Japanese considered seizing the Steregushchy as a war trophy, but taking the half-sunk ship in tow seemed a daunting task. In addition, the Russian fleet was steaming at full speed to the site of the main battle, after being summoned by the Reshitelny. In the end, the abandoned destroyer sank half an hour after the departure of the Japanese naval squadron.

3. Death of a reconnaissance scout 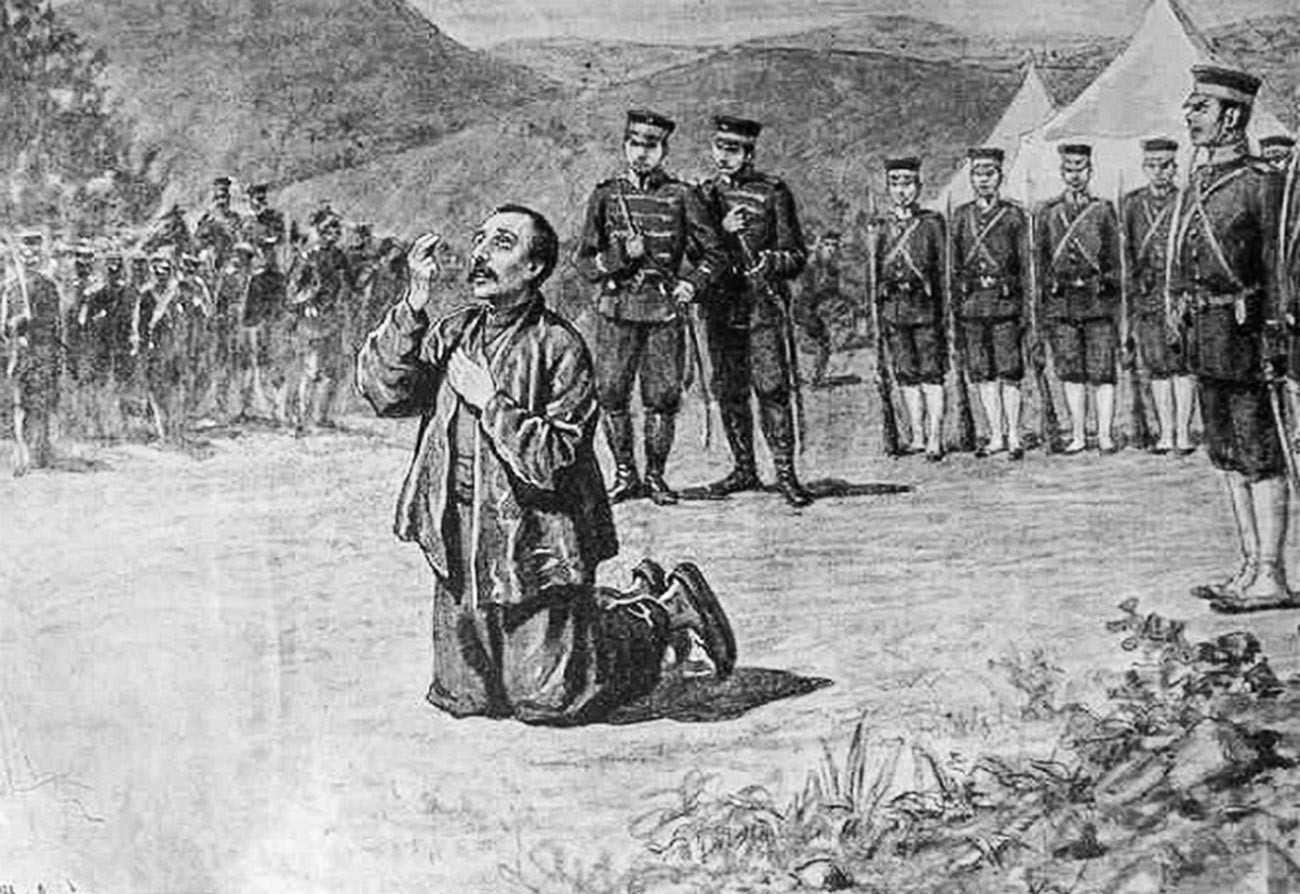 Vasily Ryabov, a reconnaissance scout with the 284th Chembar infantry regiment, had real acting talent. He could do a superb imitation of the gestures, gait and facial expressions of the Chinese, something his fellow soldiers found hugely entertaining. However, his superiors found a more practical application for Ryabov’s abilities.

Soon after the Battle of Liaoyang in northeastern China in September 1904, he was sent on a reconnaissance mission behind enemy lines. Ryabov was dressed like a Chinese peasant in a long tunic, straw coolie hat and wooden clogs and had a plaited braid fastened to his hair.

The scout was let down by not knowing the Chinese or Japanese language. Having gathered information about the disposition of enemy forces, he was on his way back to friendly territory when he was stopped on the road by a Japanese officer who ordered him to water his horse. When Vasily failed to carry out the command, the officer gave his ponytail a tug and it immediately fell off.

Taken to enemy HQ, Ryabov was subjected to lengthy interrogation and beatings, but, apart from his name and that of his unit, he said nothing. Even promises to spare his life had no effect.

In the end, Vasiliy Ryabov was executed as a spy. The Japanese were so impressed by his fortitude and courage, however, that, via negotiators, they presented a party of the 1st Orenburg Cossack Regiment with an envelope containing a letter narrating what had happened to the brave reconnaissance scout. The missive ended with the following words: “Our army cannot fail to express to the esteemed Russian Army our sincerest wish that it should nurture more genuinely fine soldiers, worthy of our complete respect, such as the aforementioned Private Ryabov.”