5 most SADISTIC gangs of the Soviet Union 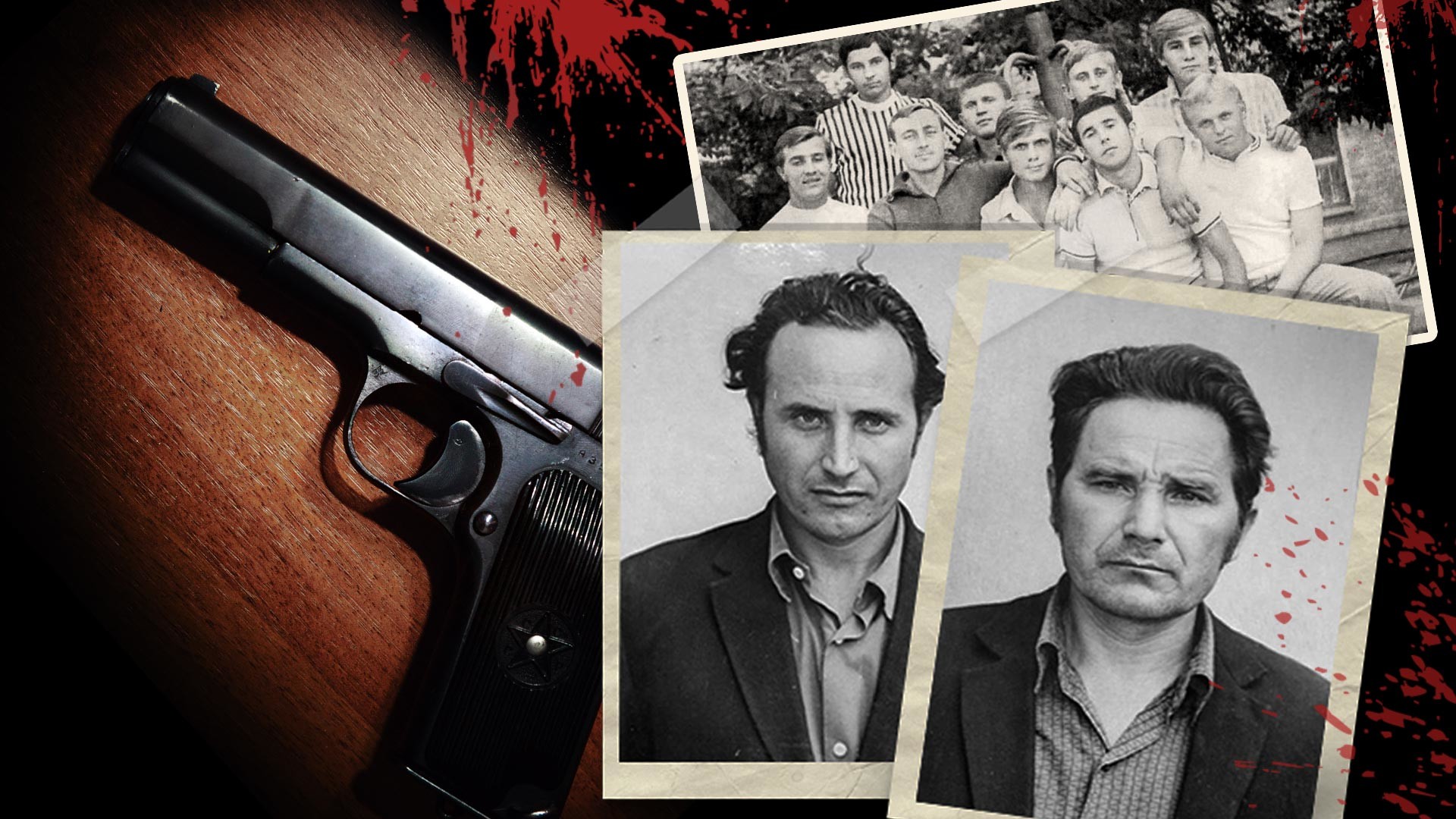 Legion media; Archive of the Ministry of Internal Affairs; Ministry of Internal Affairs in the Republic of Tatarstan; Russia Beyond
Soviet media was forbidden from reporting on a great number of crimes occurring in the country, so a large portion of the population had no idea of the kind of horrible stuff happening all around them on a daily basis.

On the night of April 23, 1983, something happened that shook the entire upper echelons of the Kazakh SSR. A security guard was stabbed to death during the night shift, his side arm stolen. Not just any guard - the night guard at the Council of Ministers sanatorium, a vacation spot reserved for republican higher-ups. This was the first time the Jackals - a band of cutthroats, led by one Viktor Mozhayev - would make their mark on the country.

All four members of the gang - Nikolay Nemchin, Vladimir Tokarev, Mikhail Soluyanov and their leader Mozhayev - worked day jobs as drivers and were not satisfied with their lot in life. They weren’t really planning on killing Kazakh civil servants at the spa. They needed firearms, which would then be used to murder and rob a cashier at a store in Almaty a month later. The plan was to acquire the weapons from the spa resort’s security.

The body of a taxi driver was also discovered. Apparently, the Jackals wanted to grab a random cab and ram an army checkpoint, grabbing the weapons. But that plan fell through.

All the Mozhayev gang’s crimes carry a particularly severe character. There were 17 murders among them. Four women were raped before being killed.

In the end, the Jackals were undone by their pride. In July, 1986, Mozhayev found himself in a drunk tank and inadvertently began boasting of his exploits, which consequently led to the arrest of the entire gang. Mozhayev and Nemchinov faced the firing squad, while Soluyanov was sentenced to 20 years and Tokrev to 15.

In 1979, during the draining of the Nevinnomyssky canal in the south of the Soviet Union, a gruesome discovery was made at the bottom - six VAZ cars. It was gruesome because it would lead the police to the Black Captain’s Gang.

Dmitry Samoylenko, two of his younger brothers, Yury and Valeriy, and their friend Sergey Lezhennikov stopped cars on the highway with plates belonging to other regions, killed the passengers, robbed them of all their valuables and disposed of the cars in the water. Sometimes they would murder entire families, not even sparing small children.

During one of the first assaults, the gang managed to shoot dead a police captain, whose uniform they continued to successfully use for staging roadside ambushes. So goes the tale of how “the black captain’s” origins.

In the course of another one of his crimes, Dmitry killed a 12-year-old girl, before sexually assaulting her body. Not even his brothers could tolerate such a fiendish act. The only thing that saved Dmitry from the elder Samoylenko was an oath that such a thing would never repeat.

The gang’s MO also focused on robbing apartments, killing the residents. Only once did they show mercy on an old grandmother and her granddaughter - they were locked in the bathroom.

The police were finally hot on the trail of the gang in 1980, by way of Sergey Lezhennikov. He had left a suspicious vehicle in a paid parking lot, using his real name. After the arrest, the police quickly uncovered the horrifying scope of the gang’s murdering spree, which stood at 32 victims.

Dmitry Samoylenko passed away in his cell from cirrhosis of the liver in 1982. Two of his brothers were shot, while Lezhennikov received 15 years behind bars. Taisia Kulbashova - Samoylenko’s civil partner, who took part in some of the attacks - received a sentence of 13 years. 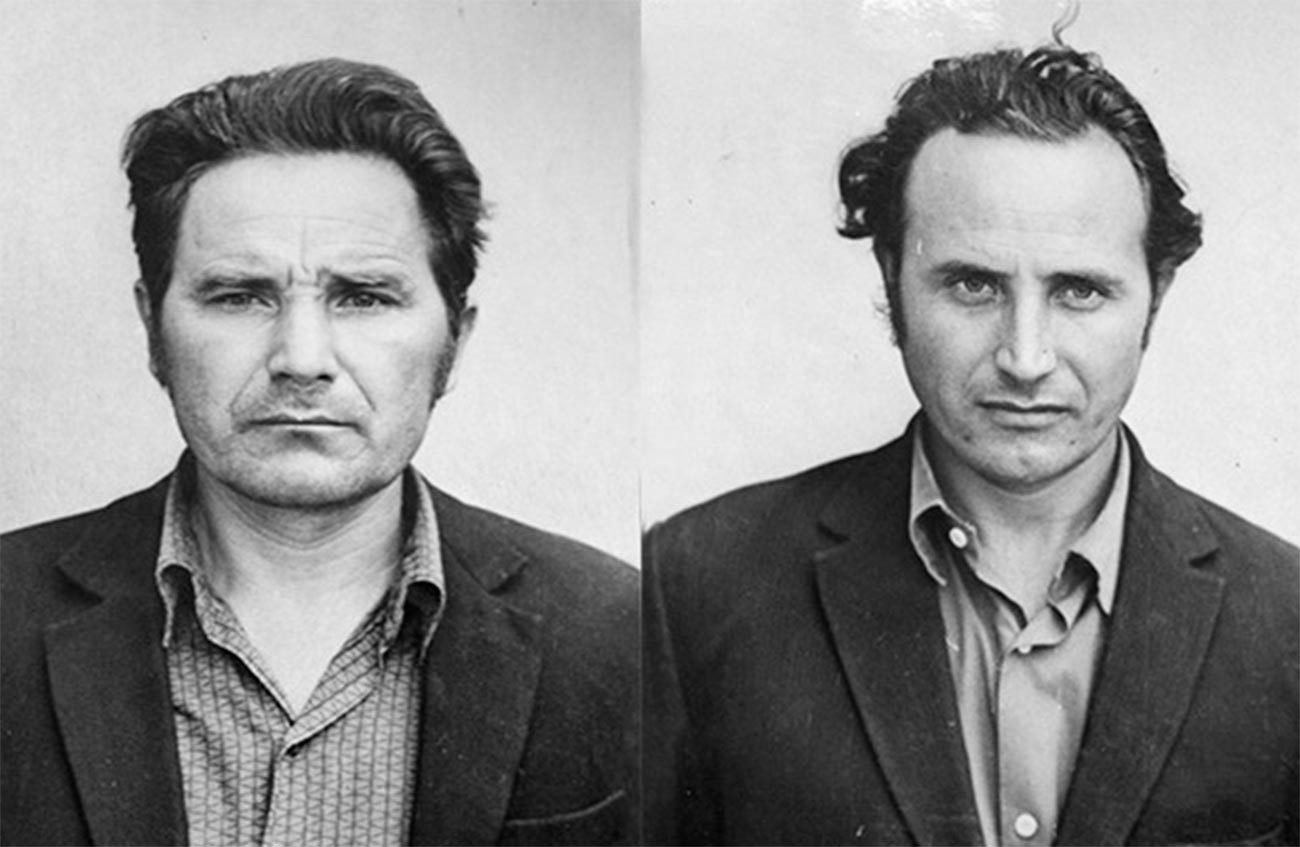 This gang was, perhaps, the most unusual and inventive of all in Soviet history. In order to carry out their deeds, brothers Vyatcheslav and Vladimir Tolstopyatov created a then unheard of arsenal of weapons and tools in their underground workshop. Each robbery was carried out with sharpness and precision - so much so that for the longest time the police suspected the Fantomas gang of ties to Western intelligence services.

Prior to carrying out their first crime, the Tolstopyatovs toiled for several years at building and amassing homemade weapons according to a strict routine: the parts were bought in different places - so as not to arouse suspicion, the ammo was nabbed from sports shooting clubs. By 1968, the gang had four small-caliber seven-shooters, three small-caliber miniguns, hand grenades and even improvised flak jackets. 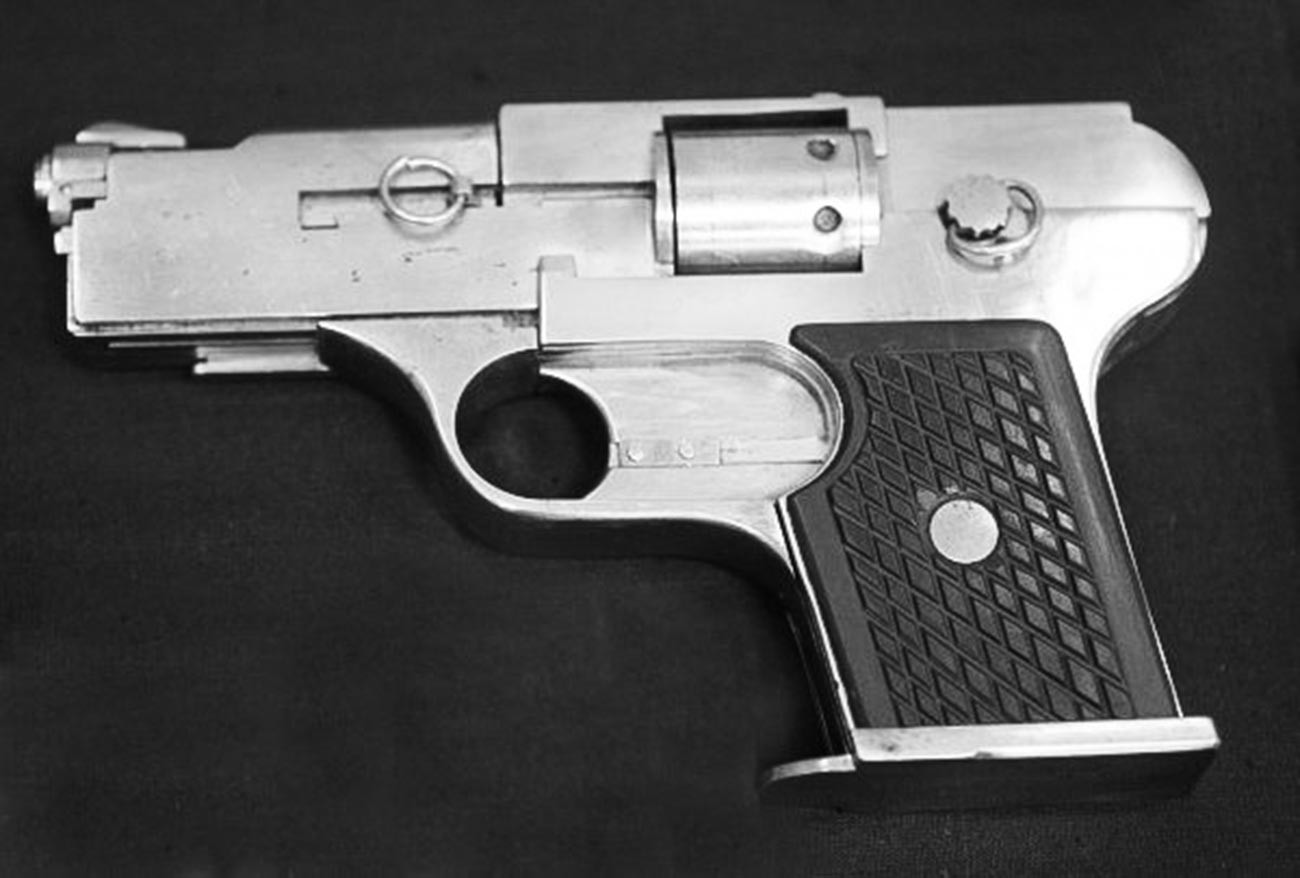 One of the pistols, designed by Tolstopyatov brothers.

For five years, the Tolstopyatovs, together with Sergey Samasyuk and Vladimir Gorshkov, wearing black pantyhose (a fact that contributed to the gang’s name), carried out attacks on Gosbank (“State Bank”) branches, clothing stores and even factories. Cashiers were always a target. Such previously unheard of coordination among Soviet gangs proved a real challenge for the law. The criminals committed 14 armed robberies, with two deaths under their belt.

On June 7, 1973, during one of their robberies, the gang became involved in a shootout with the police. Samasyuk was shot dead on the spot as a result, with the rest of the gang taken alive.

Lawyers tried to prove to the court that the Tolstopyatovs were talented nuggets who could bring a lot of benefits to the Soviet military-industrial complex. However, all three gang members were shot. 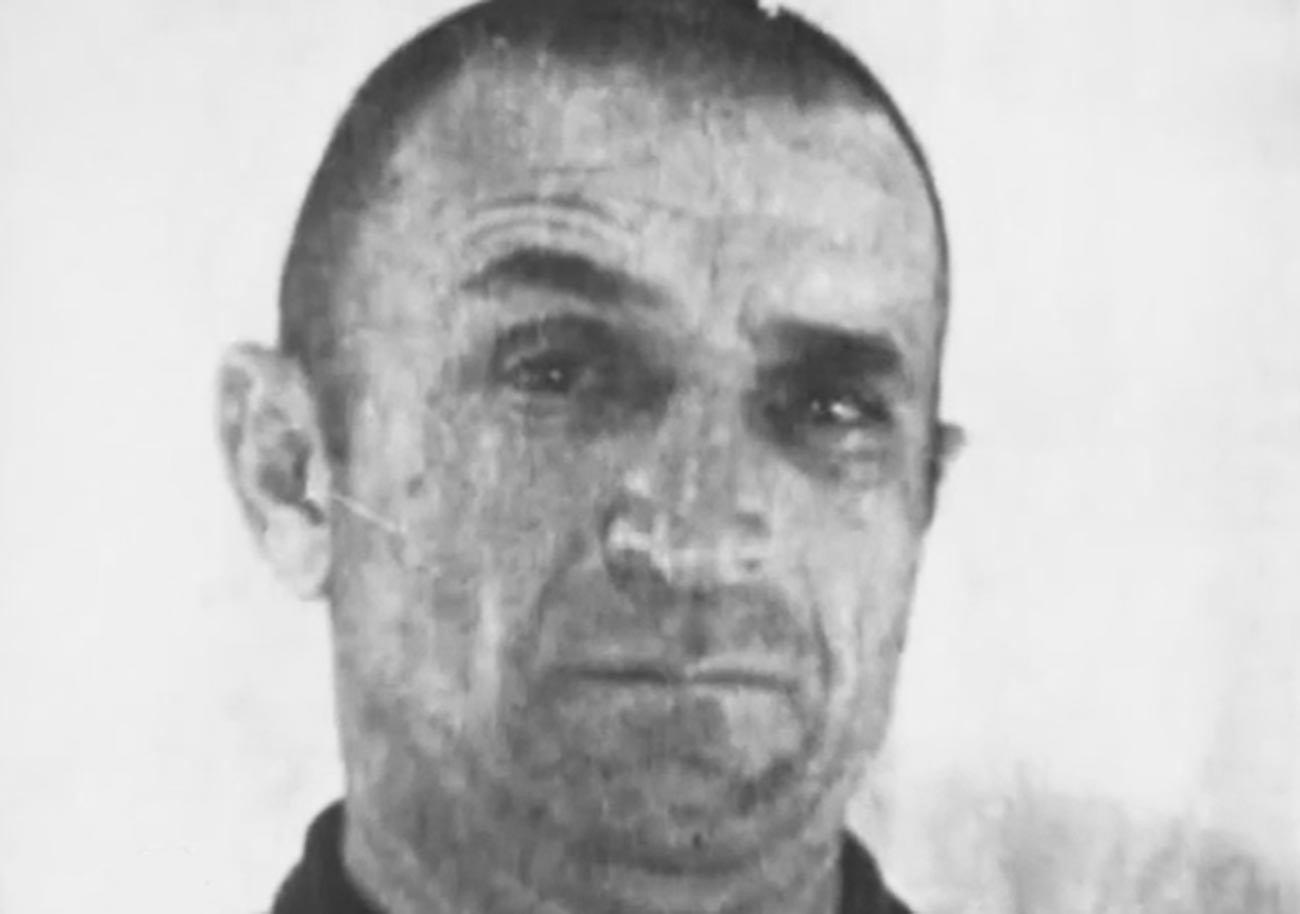 In the same period as Samoylenko’s gang, in the 1970s, another one, in southern USSR, struck fear into the hearts of people. It was headed by one Khabala Osmanov. The gang’s signature was armed robbery of stores, shopping centers and townhouses (where they frequently acquired firearms). They would also pull off roadside ambushes, accompanied by murder.

In 1979, the criminals decided on an especially dastardly deed: they attempted to obtain submachine guns from a jail’s armory in Nalchik. The keys were provided by an acquaintance who worked there as senior oversight officer. Having gained access to the territory, the band of criminals hesitated to face the guards in a gunfight, so opted to tie one up and take his gun. 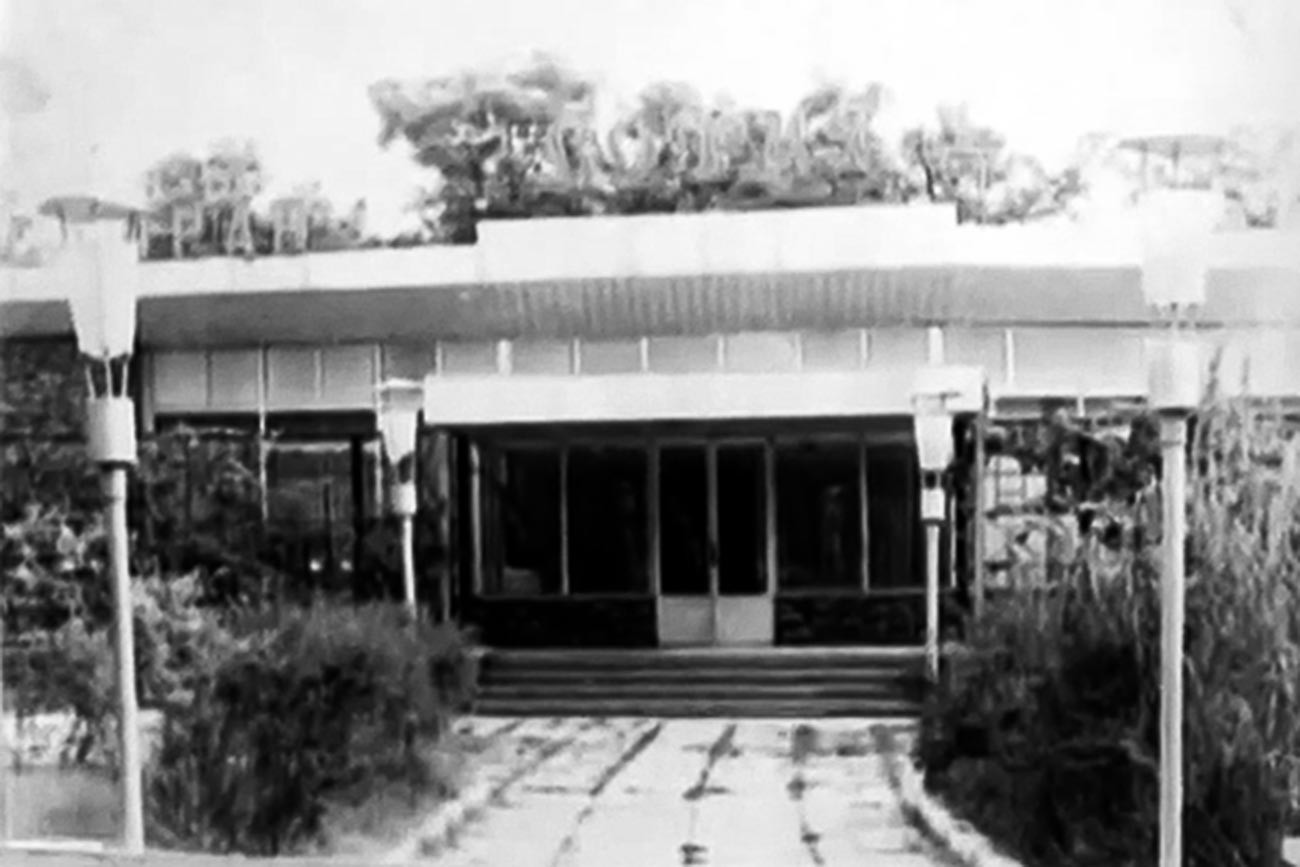 On October 10, in North Ossetia, Osmanov’s gang carried out its most notorious job. In order to rob a cash register, three of the members burst into ‘Sofia’, a restaurant in the village of Elkhotovo. A birthday was being celebrated there that day. The gang didn’t think long before opening fire on the guests, killing eight people and heavily wounding two.

It was an all-hands-on-deck situation for the local police and even soldiers from the local barracks were put on the case. Soon, law enforcement caught Osmanov’s trail, managing to grab him on the second attempt, wounding him in both legs. The other three members were captured subsequently.

Khabal Osmanov, Aslan Gegirov, Ruslan Gubochikov and Safrail Kyarov were sentenced to death by firing squad. The media did not report on what happened in ‘Sofia’, but this did nothing to stop the entire Caucasus region soon knowing. People then treated the macabre place with such apprehension that the business had to be closed and the building demolished. 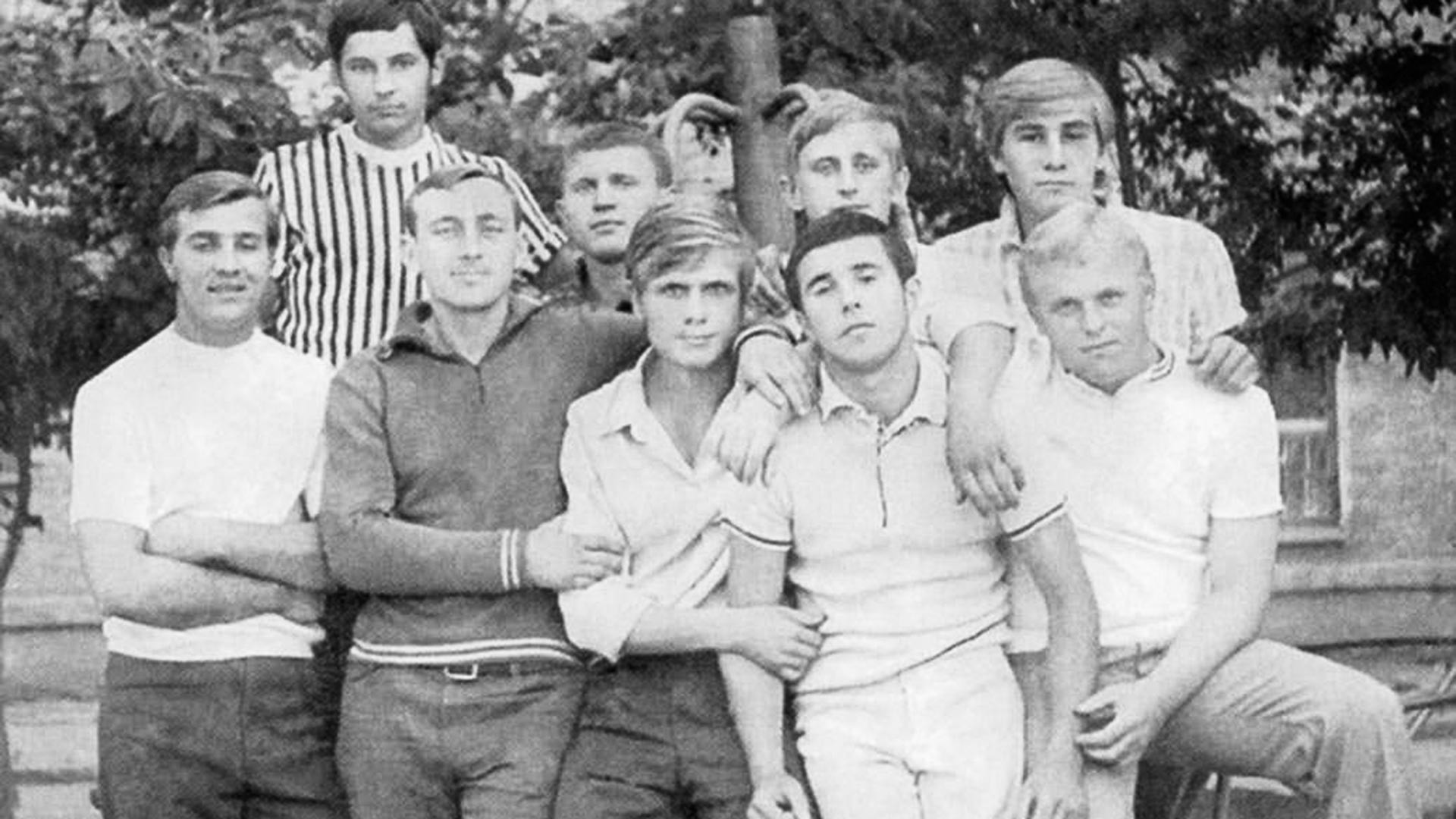 Ministry of Internal Affairs in the Republic of Tatarstan

In the mid-1970s, Kazan, the capital of the Tatar ASSR, had been the battleground in a turf war between the region’s various criminal gangs. The most fearsome of all was the ‘Teplokontrol’ factory gang, which received the moniker ‘Tyap-Lyap’.

The gang’s headquarters was a makeshift gym, built into one of the basements of a five-story ‘khruschevka’ apartment building. There, its leaders - Sergey ‘Antip’ Antopov, Zavdat ‘Dzhavda’ Khantemirov and Sergey ‘Skryaba’ Skryabin planned their jobs. The clubhouse also served for inducting new members. The prospect had to go through a selection process, which involved a strong punch, demanding that the recipient keep on their feet. The gang included more than 300 such members!

Well trained, with no unhealthy habits (drinking and smoking was forbidden under threat of a severe beating), the gang became the leading criminal enterprise in Kazan. Muggings, robberies, murder, rape, extortion and carjackings - nothing was off the table.

Frequently, the Tyap-Lyaps staged mass brawls against rival gangs. A popular practice was the fear tactic of “going on runs” - the act of going to another city district with the sole intention of causing bodily damage to anyone the gang encountered. 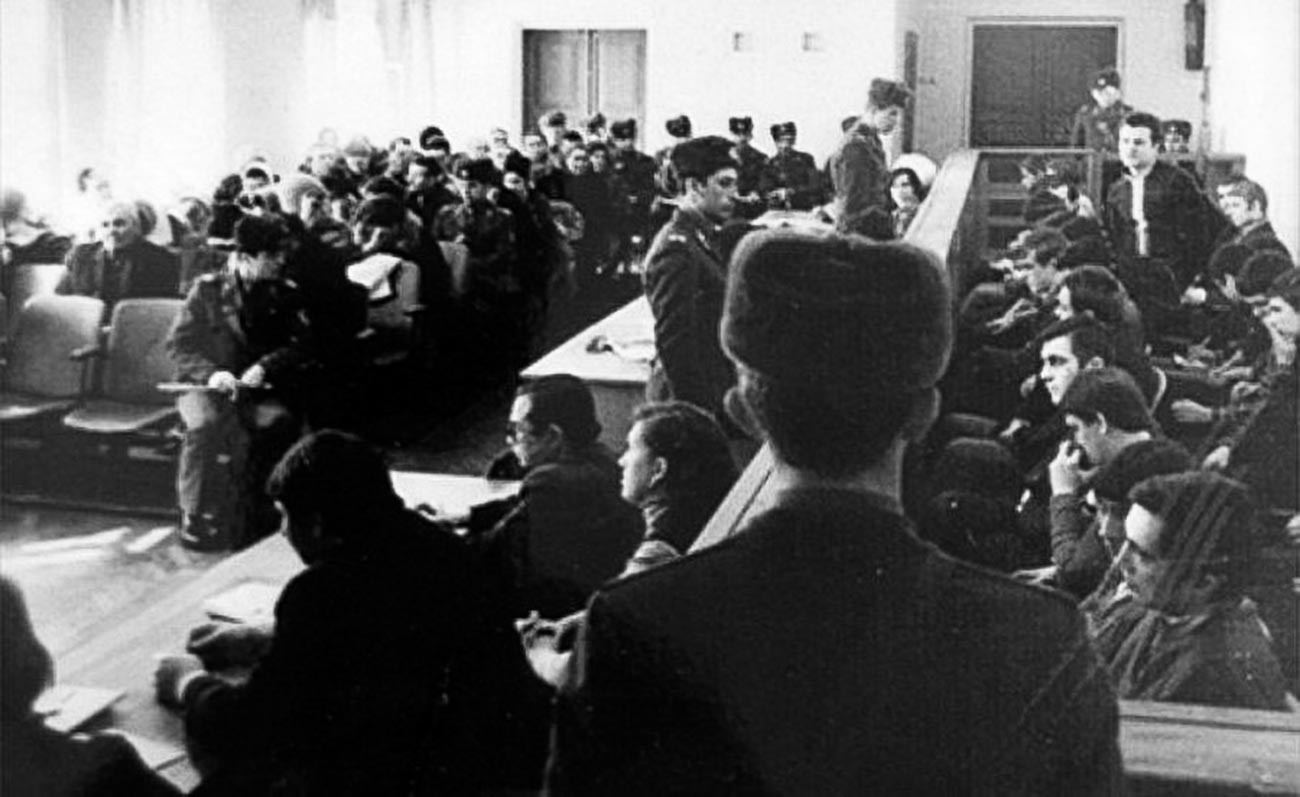 Ministry of Internal Affairs in the Republic of Tatarstan

On August 29, 1978, 200 members of the band, armed with construction fittings, sawed-off shotguns and pistols, carried out a “run”, which became the last drop for the police’s patience. A passenger bus was shot up, together with passing motorcyclists and a great number of passersby killed and wounded (among them a pregnant woman), as well as three police officers attempting to apprehend the criminals.

Tyap-Lyap then became public enemy no.1 in Kazan. The leaders were soon arrested, together with several dozen fighters. During the trial, in order to prevent the remaining members from staging a break, an entire Internal Troop platoon was called to secure the building with batons and tear gas.

In 1982, Zavdat Khantemirov faced the firing squad, while Antipov and Skryabin - the two other leaders - managed to luckily avoid the gravest of sentences, thanks to lack of cooperation from their co-conspirators. They each received 15 years in prison (with less senior members receiving shorter sentences).

The beheaded Tyap-Lyap gang quickly lost its influence and was forced to give up positions to other outfits. After release, Antip and Skryaba both joined different gangs and died in Russia’s criminal wars, which swept over the country in the 1990s. Some sources, however, claim that Antipov is still alive.