What happened to Lenin’s brain after death? 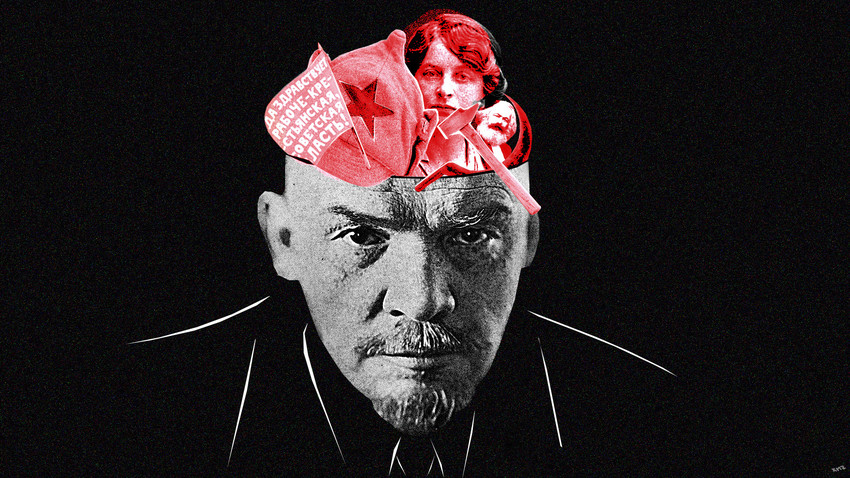 Alexander Kislov, Getty Images
Immediately after Lenin’s death, his brain was removed from his cranium. Why did the Bolsheviks need to extract and study the brain of the leader of the Russian Revolution?

From the autopsy of Lenin’s body on January 21st, 1924: “The frontal part of the left hemisphere, compared to the right one, is slightly sunken. [...] The brain – without the membrane – weighs 1,340 grams (47 ounces). In the left hemisphere, in the areas of the precentral gyrus, parietal and occipital lobes, paracentral slits, and temporal gyrus – areas of the strong sinking of the brain surface. [...] When the brain is dissected, its ventricles are dilated, especially the left one, and contain fluid. In places of entrapment – softening of brain tissue with many cystic cavities.”

Obviously, Vladimir Lenin had some brain damage or physical problems, at least in the years preceding his death. What was it and how did it affect his brain? 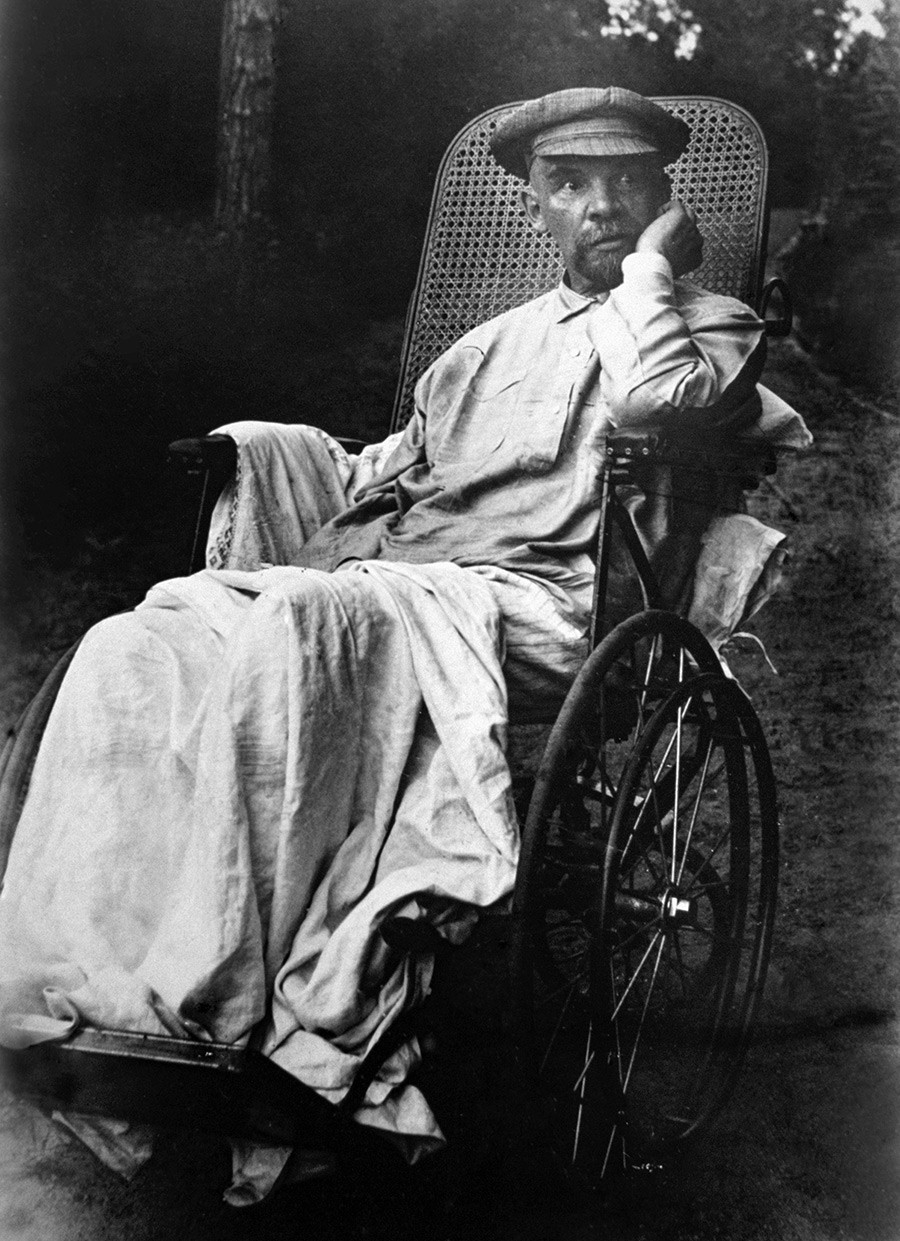 July-August, 1923. Vladimir Lenin in a wheelchair at the 'Gorki' Estate, visibly affected by the disease. This is one of the last photos of Vladimir Lenin.

One can have different opinions about Vladimir Lenin, but it’s hard to question his outstanding intellectual abilities. He graduated from the Simbirsk Classical Gymnasium with a gold medal. Lenin wrote easily in English, French, and German and spoke Greek and Italian. Soviet statesman Alexander Schlichter (1868-1940), who worked with Lenin, remembered that he could write an article that occupied a whole newspaper column in just an hour. Lenin’s classmate Alexander Naumov (1868-1950) called him a “walking encyclopedia” and wrote that Lenin had “outstanding abilities: an exceptional memory, insatiable scientific curiosity, and unusual productivity.”

The bathroom in the 'Gorki' Estate, where Lenin's brain was taken out of his cranium immediately after his death.

Finally, the apparent life goal of Vladimir Lenin – the destruction of the Romanov monarchy and creation of the USSR – was in fact marvelously accomplished by him through long years of underground activity, hard work, propaganda, financial speculation, and intrigues. This brought Lenin an iconic status even during his lifetime. The Bolsheviks and the Russians who supported them believed Lenin was some kind of a superman. Apparently, doctors wanted to study Lenin’s brain also to determine the possible reasons for his outstanding abilities.

What happened to Lenin’s brain? 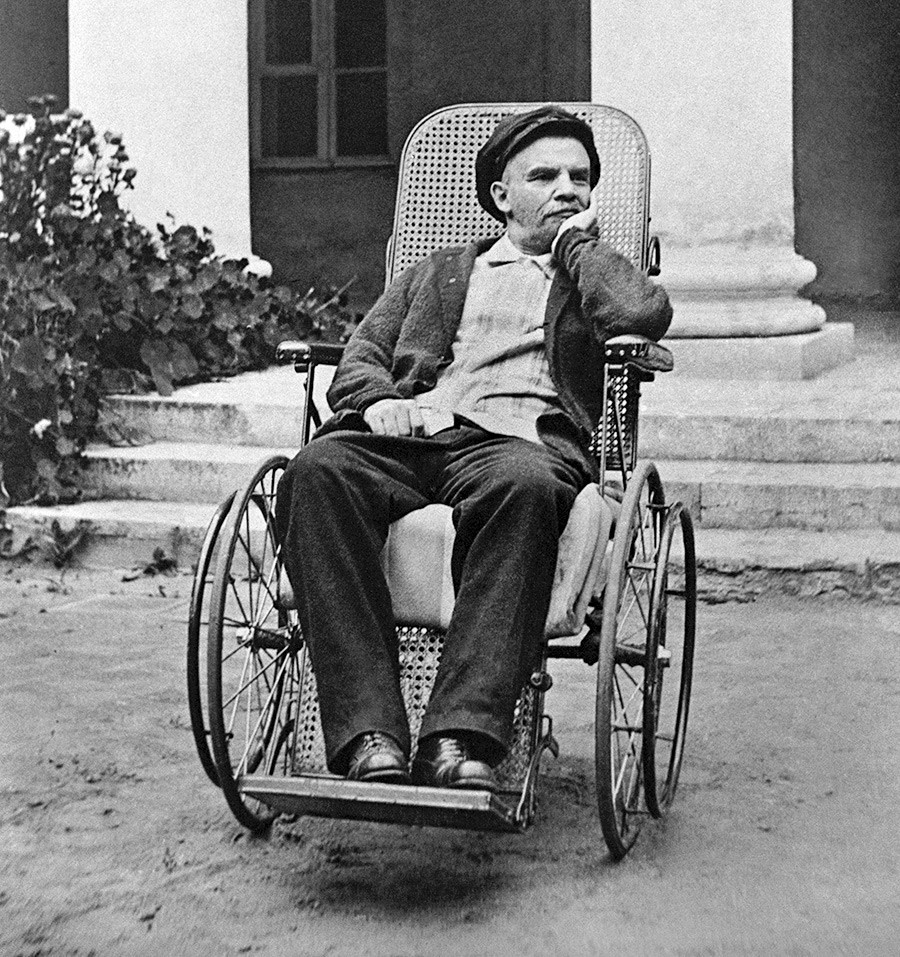 Moscow region. Vladimir Lenin in a wheelchair at the 'Gorki' Estate, 1923.

Not far away from Kursky railway station in Moscow, in Obukha Lane, there is a building of the former Evangelical Lutheran Hospital, built in 1903-1914 by architect Otto von Dessien. In this building, the Research Institute of The Brain of the USSR Academy of Medical Sciences (now, The Department of Brain Research of the Scientific Center of Neurology of the Russian Academy of Medical Sciences) is located. This is where Lenin’s brain is preserved, separately from his body which still lies in the mausoleum on Red Square in the very center of Moscow.

Immediately after Lenin’s death, his brain was placed in a formalin solution, and in 1925, a special laboratory to study it was created. Oskar Vogt (1870-1959), a German physician and neurologist, was invited to Moscow to create and maintain this laboratory. Lenin’s brain was dissected under Vogt’s supervision and preparations began to study it. According to the final report, there were 30,953 slices, each plate 20 micrometers thick (0.02 mm). 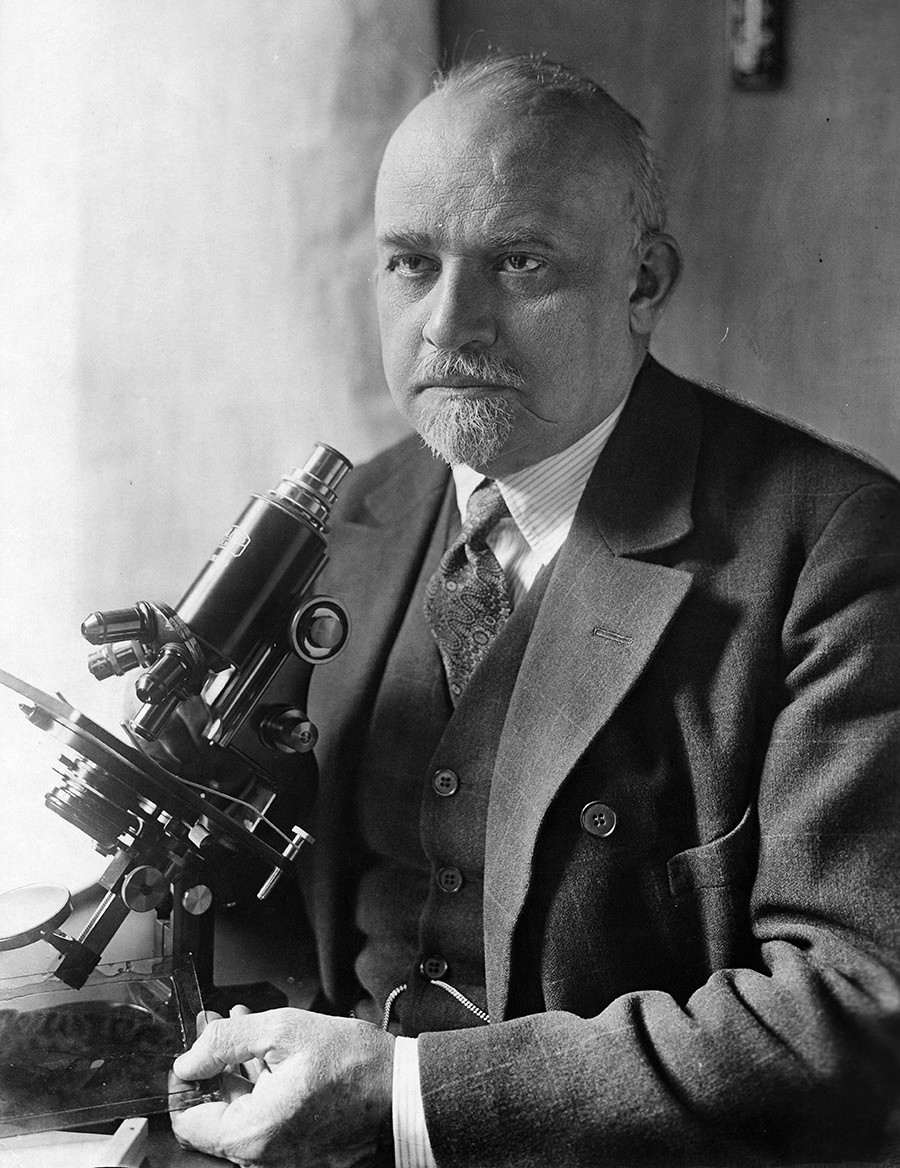 However, in 1928, after obtaining just one of the plates of Lenin’s brain, Vogt left Moscow and never came back. He used the brain sample in demonstrations during his European lectures. According to him, Lenin's brain was distinguished by "very large and numerous pyramidal cells in the third layer of the cortex." However, later it became clear that the cytoarchitecture of the brain has nothing to do with the intellectual abilities of its owner. Since 1932, the question of the physical qualities of Lenin’s brain has not been raised again.

In 1969, Boris Petrovsky (1908-2004), the Soviet Minister of Health, wrote in a note to the Central Committee of the Communist Party: "The Ministry of Health of the USSR believes that despite the fact that the results of the cytoarchitectonic study of the brain of Vladimir Lenin are of great scientific interest, they should not be published."

What did Lenin die of? 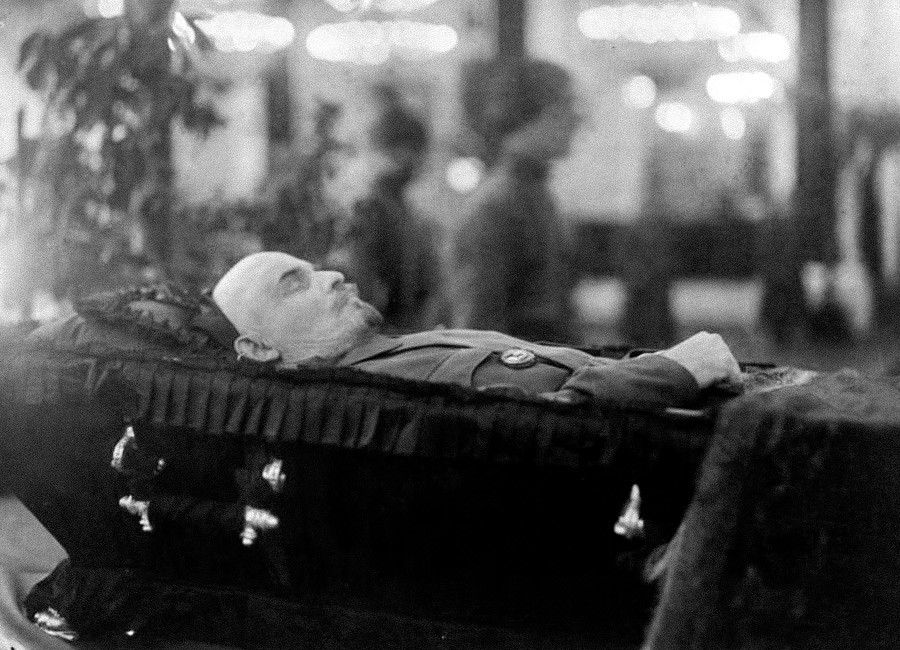 The first signs of some neurological disease had shown themselves in 1922, two years before Lenin’s death. Dizziness, blackouts, and insomnia, then – weakness in the arms and legs, and then – loss of speech. Doctors weren’t unanimous about the reasons for all of this – they suspected either atherosclerosis (but Lenin was far too young for this, only 51 at the time), or syphilitic lesion.

But all doctors noted exceptional preservation of Lenin’s intellect. Sometimes, the disease lifted, and Lenin went back to work in the Central Committee, but in March 1923, he again lost the power of speech. Although after some time, it resumed, Lenin never went back to work.

There were 11 doctors present at the autopsy, but the autopsy was re-written at least three times. The final diagnosis was “common atherosclerosis of the arteries with a pronounced lesion of the arteries of the brain.” However, not much information is available otherwise. The doctors remained silent about the details until their death. And the diary of Lenin’s disease, created in the last two years of his life by the three doctors who cared for him, was classified for 75 years following Lenin’s death. In 1999, when that term was up Olga Ulyanova, Lenin’s niece, was still alive. She asked the documents to be classified for a further 25 years – until 2024, the 100th anniversary of Lenin’s death. 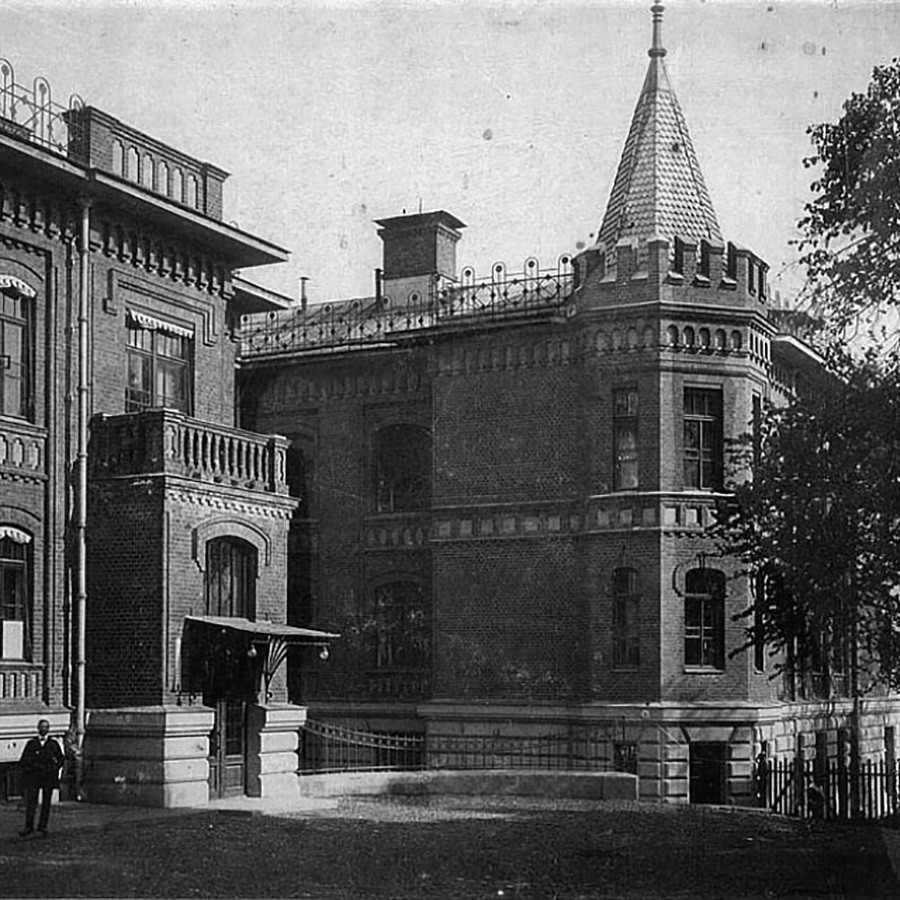 The former Evangelical Lutheran Hospital by Otto von Dessien, housing the Institute of the Brain, where Lenin's brain material is preserved

Gerontologist Valeriy Novoselov seems to be the only medic who ever worked with these diaries, but he was prohibited from photocopying them. According to Novoselov, Lenin died of brain syphilis (in the 1920s, syphilis was very common in Russia, and could be contracted not through sexual contact, but through transmission from objects touched or used by those with the disease.)

However, Max Nonne (1861-1959), an international specialist on the syphilis of the brain at the time, who oversaw Lenin during his final disease, wrote that “There was absolutely no evidence of syphilis.” Recently, Harry Vinters, Lev Lurie, and Philip A. Mackowiak of the California University proposed that Lenin died of arterial calcification, caused by mutations in the 5'-Nucleotidase Ecto (NT5E) gene (an extremely rare disorder, up to 2020 less than 20 individuals have been reported to have the condition). However, until 2024, no further investigation of the causes of Lenin’s death is possible.