The Red Army’s most legendary commander 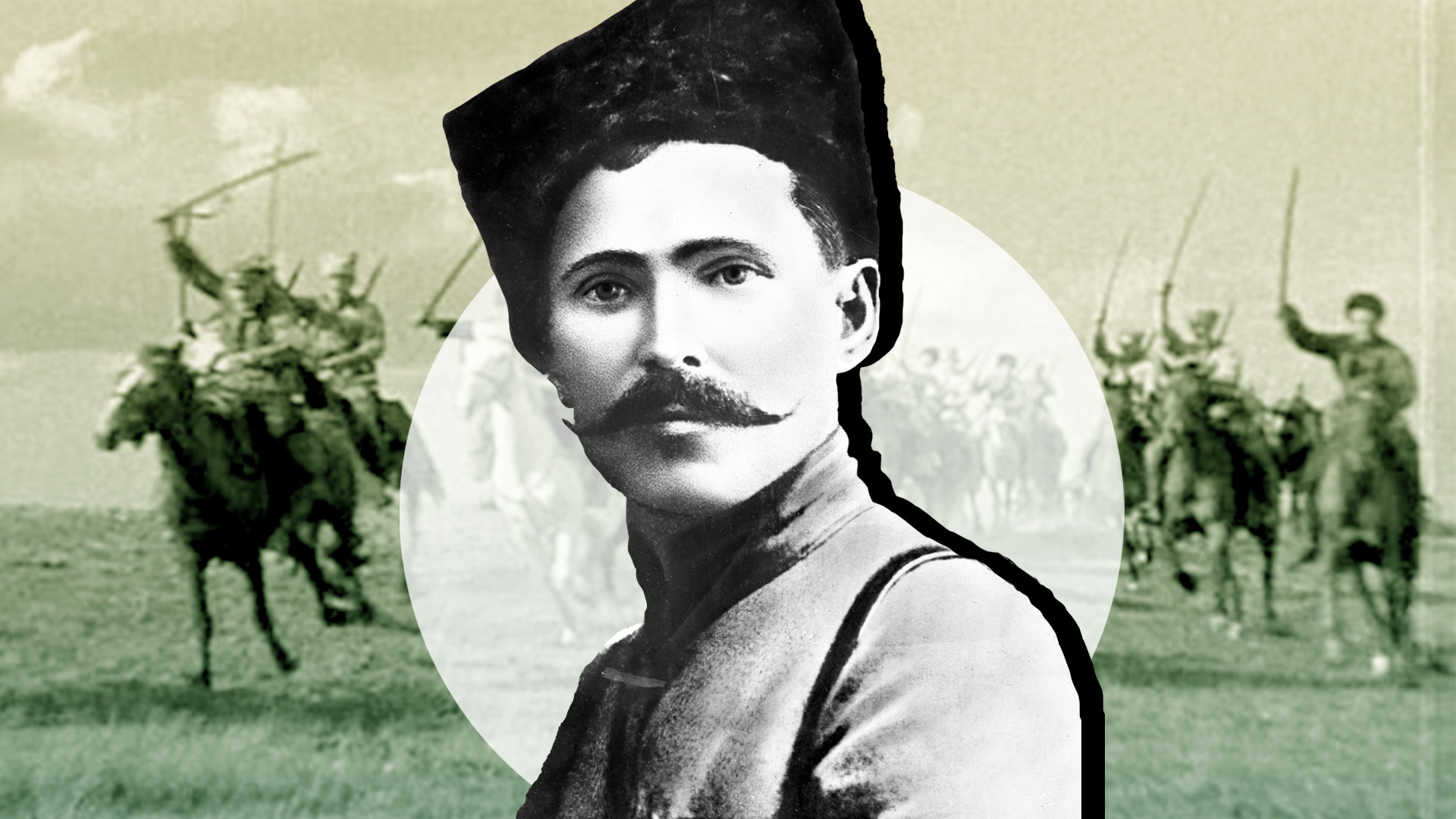 Sputnik, Georgy and Sergey Vasilyev/Lenfilm, 1934
Stalin and Soviet propaganda turned Vasily Chapayev into a folk hero and semi-mythical deity. But who was he in real life?

If you ask a Russian, or anyone else from other post-Soviet countries, who was the Red Army’s most legendary commander, the answer in most cases will be the same — Chapayev. At the same time, however, the respondent is most likely not to know any details of this celebrated military figure’s biography, and has probably never seen the film about his exploits, and most definitely hasn't read the novel telling his life story.

Vasily Ivanovich Chapayev was not a leading Soviet military commander and, despite his personal bravery, he did not perform any exceptional feats to fire the imagination.

So, how did it happen that an ordinary Civil War commander became not just a cult hero for his generation but even now, 100 years later, his name is still remembered in modern Russia? 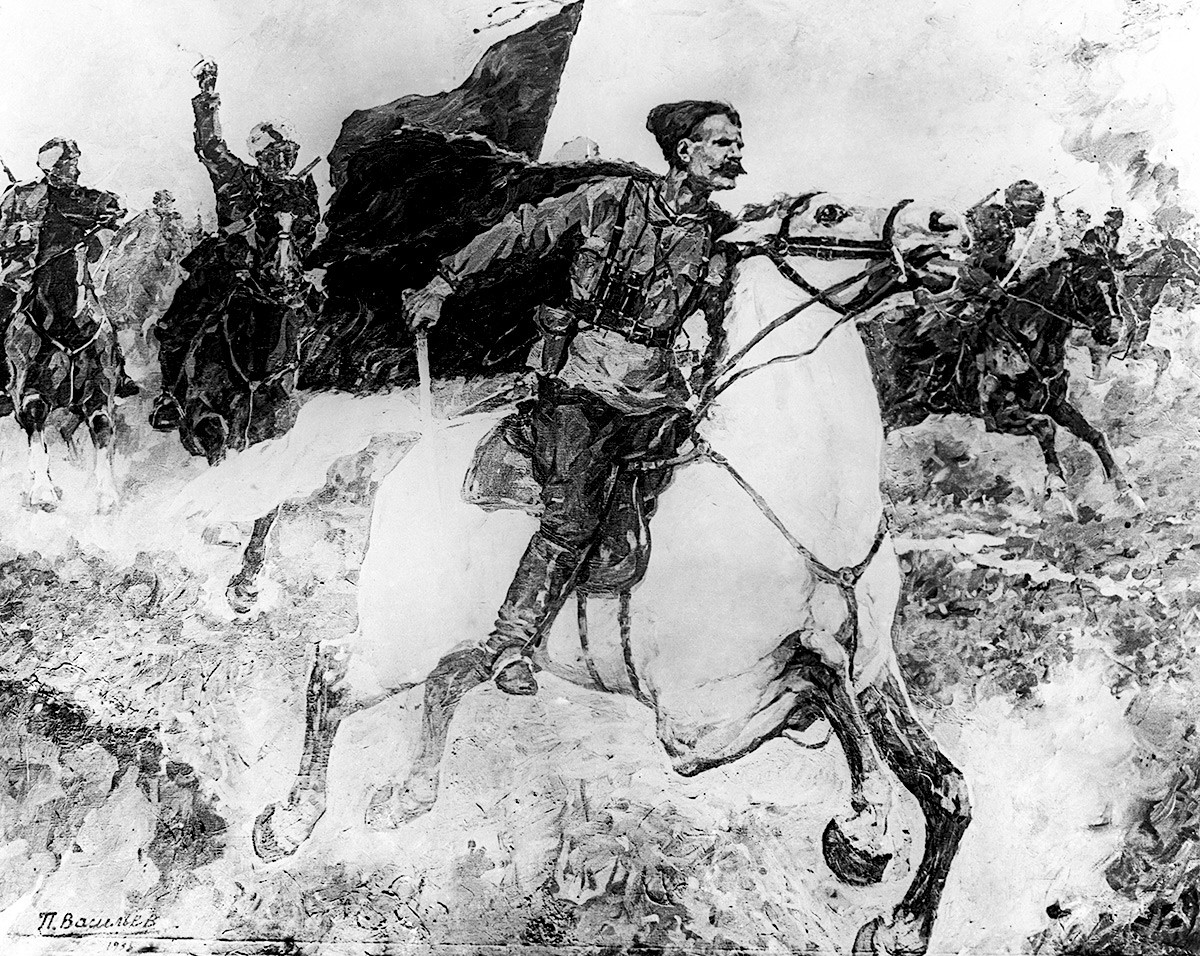 A hero of two wars

The military career of Vasily Chapayev (real name - Chepayev) began on the battlefields of World War I. There, he rose to the rank of sergeant-major and was awarded the Cross of St. George three times. In September 1917, just before the October Revolution, Chapayev joined the Bolsheviks.

Hailing from a "correct" peasant background and having much military experience and outstanding leadership qualities, Vasily Ivanovich quickly climbed the Red Army career ladder. During the Civil War, which raged through the country, he rose from regimental commander to divisional commander. 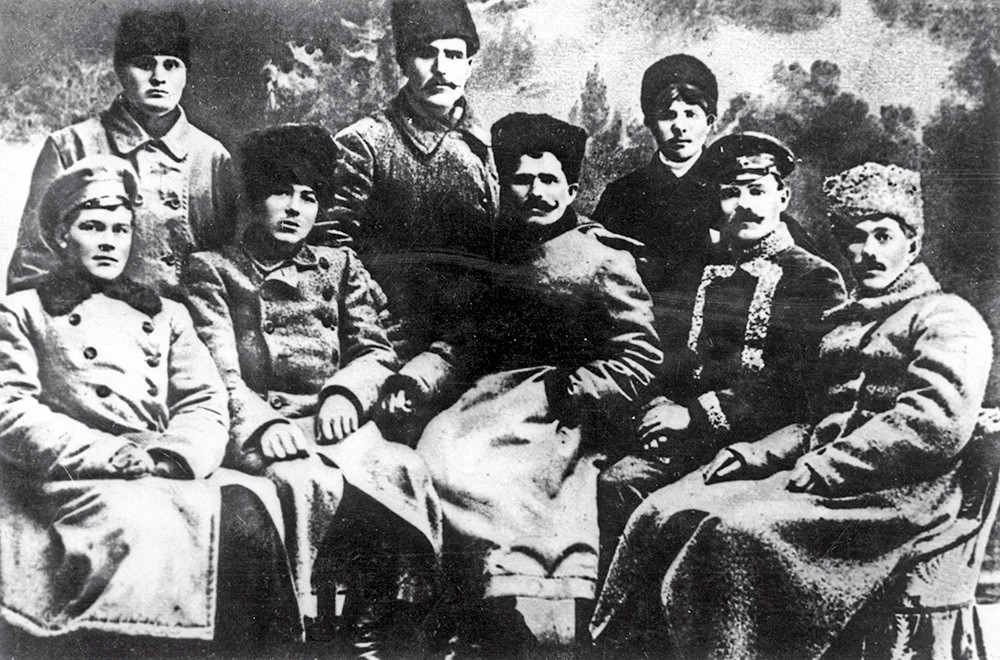 Later, Soviet propaganda would portray Vasily Ivanovich as a dashing cavalryman. In fact, owing to a wound that he sustained while fighting in World War I, Chapayev couldn’t stay on a horse for long and preferred an automobile or a motorcycle with a sidecar. Also, he didn’t command the cavalry but rather the infantry.

During the spring and summer of 1919 Chapayev took part in military operations against the White armies of the "Supreme Ruler of Russia", Alexander Kolchak, in the Volga region and South Urals. The Bolsheviks managed to halt the enemy offensive, as well as to seize the major industrial center of Ufa. At the same time, units of the 25th Rifle Division under Chapayev's command were the first to storm into the city.

Chapayev also took part in the suppression of peasant rebellions directed against the so-called ‘surplus appropriation system’ — the confiscation of surplus bread and other food for state needs. The USSR, however, preferred not to dwell about these usavory details.

The crossing of the Belaya river by he 25th Rifle Division under Chapayev's command, 1919.

The circumstances of Chapayev's death remain the most mysterious episode of his biography. It is still not known exactly how the legendary commander died.

On Sept. 5, 1919, a thousand White Army Cossacks conducted a daring raid on the Red Army’s rear positions, mounting a surprise attack on Chapayev's headquarters in the town of Lbishchensk (now Chapayev village in Kazakhstan).

"Before dawn, the enemy approached Lbishchensk from three sides. On the fourth, eastern, side was the River Ural. Telephone and telegraph lines of communication with the troops and with the city of Uralsk were cut. Some of the local Cossacks made their way into Lbischensk via back routes in order to fire from the rear and sow panic and death," according to the book, Chapayev. An Outline of His Life, and Revolutionary and Military Activities, written by the legendary commander's children, Alexander and Klavdia. 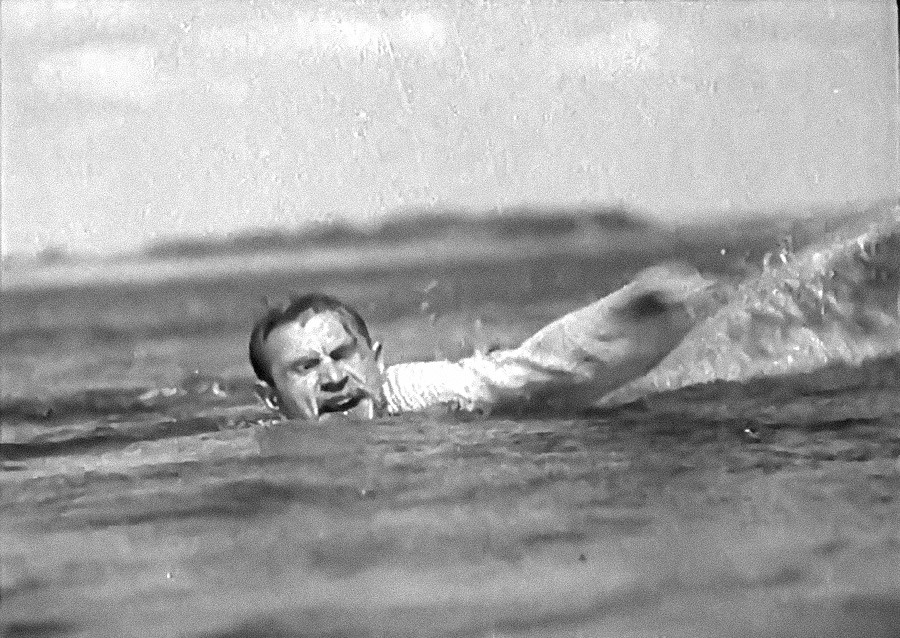 A still from 'Chapayev'.

The Red forces suffered a devastating defeat: 1,500 people died in the town and another 1,000 were either hacked to death in the steppe or drowned in the River Ural while trying to escape. According to the official version of events, this was how the celebrated commander died, having been hit by an enemy bullet in the middle of the river. According to another account, the wounded Chapayev was taken by boat to the other side where he died. There is also speculation that he may have been captured and executed. In any case, the remains of Vasily Ivanovich have never been found.

A legend is born

Chapayev’s death wasn't glorious in any way — more heroic and gallant senior commanders lost their lives in the war. But something occurred in 1923 that cemented Vasily Ivanovich's fame for generations to come.

In that year, Dmitry Furmanov's novel, Chapayev, dealing with the exploits of the dashing commander, was published. The author knew his hero well — he had been a commissar in the 25th Rifle Division. 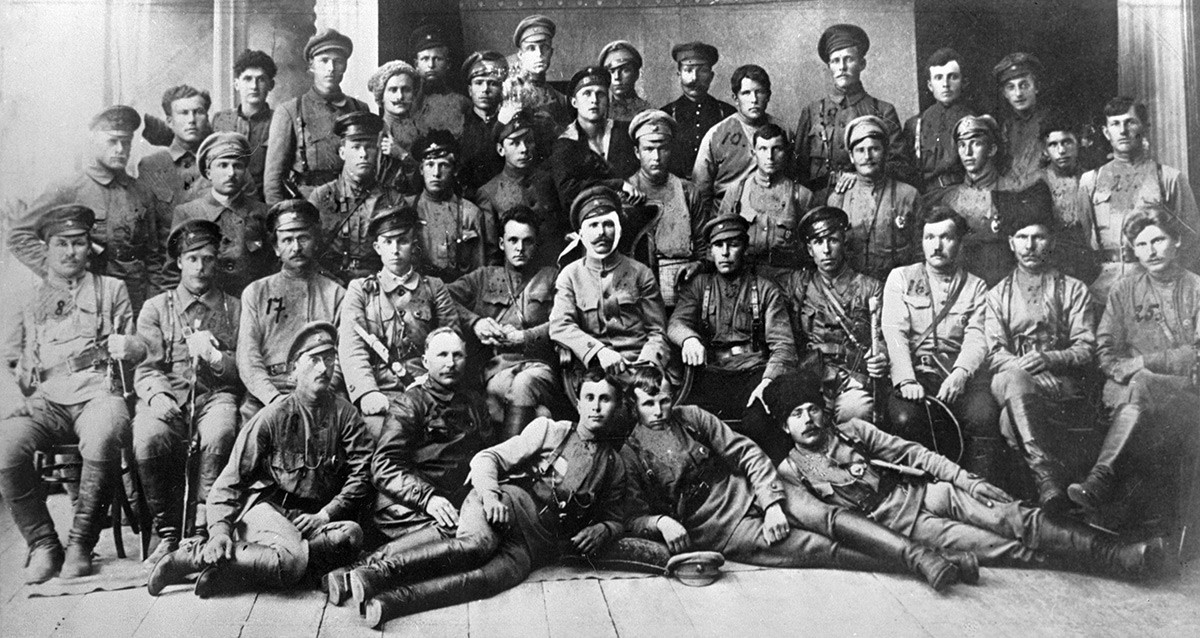 Vasily Chapayev (C) with a bandage and Dmitry Furmanov (on his right), 1919.

It is a curious fact that Furmanov and Chapayev had not been the best of friends. Quite the reverse — they had a serious falling out caused by Vasily Ivanovich's advances to the commissar's wife. "I began to despise you just a few days ago when I realized you are a careerist and when I saw that your advances were becoming particularly brazen and insulted the honor of my wife…" Furmanov wrote to Chapayev. "Your touching her left me with a certain feeling of revulsion. It was as if a white dove had been brushed against by a toad: I found it chilling and loathsome…"

Not long before the massacre of Lbishchensk, Furmanov left the place where the division was stationed (that's what saved his life). There’s evidence that before his departure the two men had reconciled their differences, and the heroic image of Chapayev that the writer created in his novel serves to confirm this.

Furmanov altered one letter in Vasily Ivanovich's real name, changing "Chepayev" to "Chapayev" saying that it sounded better. The new surname received such widespread popular acceptance that it was given official blessing. Even the commander's children had to amend their identity documents and get used to the idea of henceforth being called by a different last name. 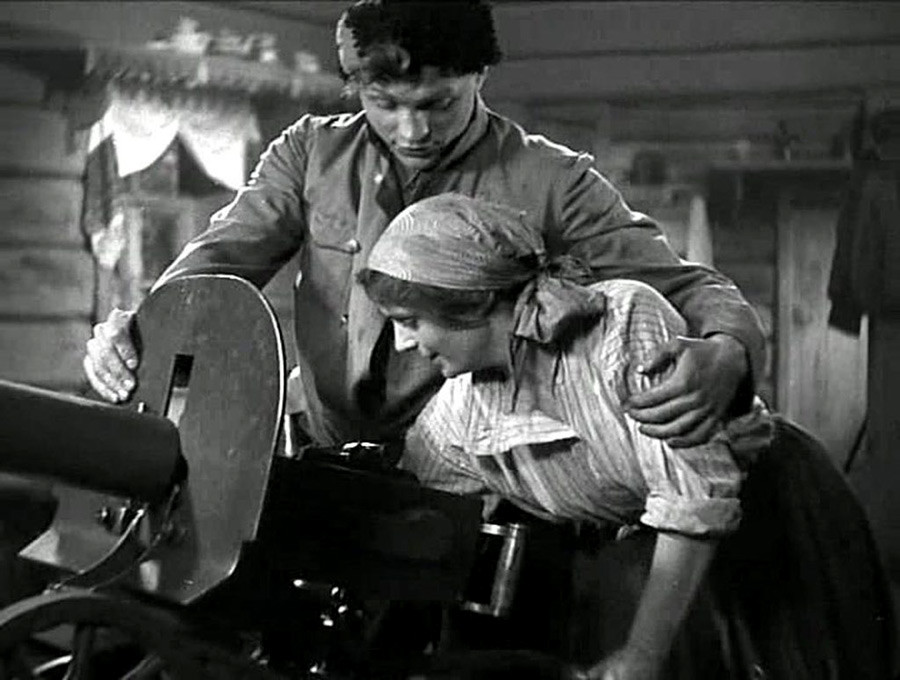 A still from 'Chapayev'.

Chapayev was elevated to a new and much higher level of popularity by the eponymous 1934 film based on Furmanov’s novel. The author had died in 1926 and did not live to see the premiere.

Even as the screenplay was being written, Stalin got involved. He personally ordered the addition of the love story between Vasily Ivanovich's assistant Petka and the machine gunner Anka.

"The Father of the Peoples" consciously contributed to the creation of the cult of deceased Civil War heroes. It was unwise to glorify those who had survived — they could become serious rivals in the struggle for power; indeed, many soon perished in the purges. The dead, on the other hand, presented no threat. 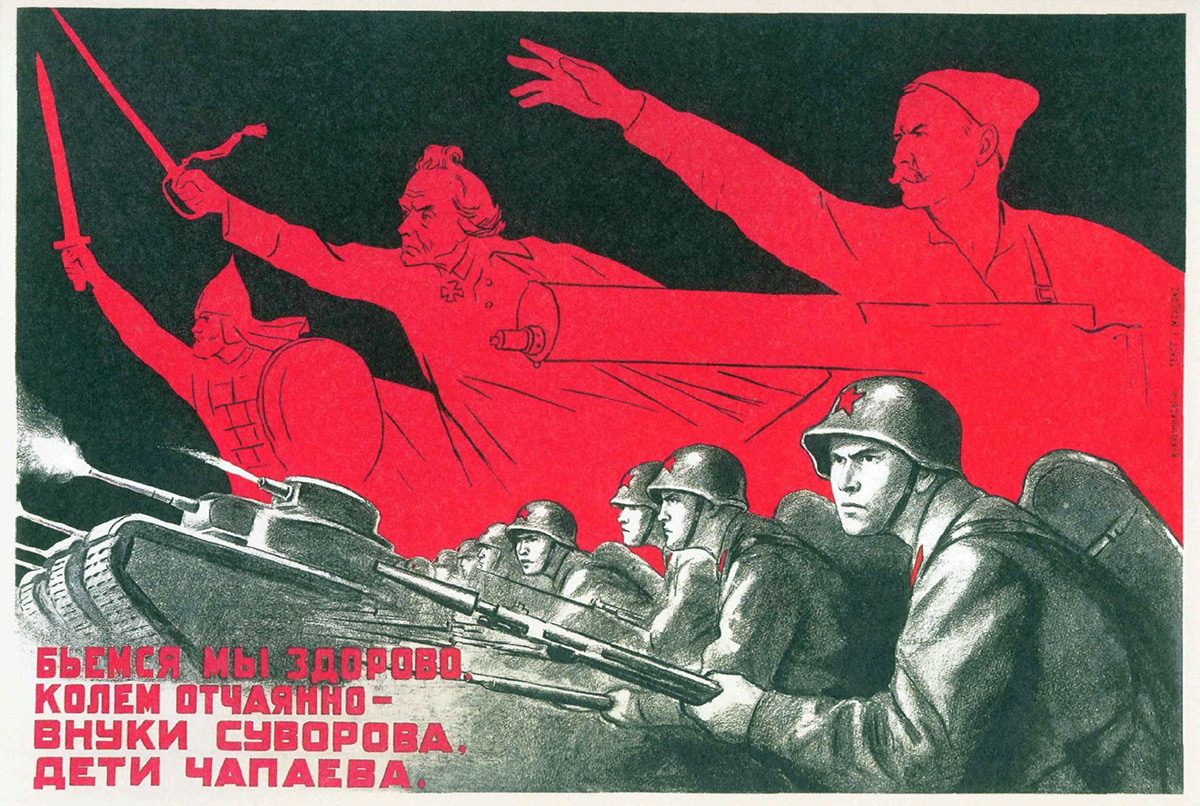 The film was a runaway success. More than 40 million people saw it within just a few years after its cinema release. Stalin himself saw Chapayev 38 times.

During World War II, Vasily Ivanovich became one of the most prominent figures of Soviet propaganda. One poster featured his image with the slogan: "We fight hard, we strike furiously, grandsons of Suvorov, children of Chapayev!"

In 1941, a short film, "Chapayev With Us!", was made in which the commander managed to swim across the River Ural. On reaching the opposite bank, he encounters World War II Red Army soldiers and makes an impassioned appeal to mercilessly strike the Nazi invader.

The hero of many a joke

As years passed, the figure of Chapayev lost its exalted status and spectators no longer cried during the scene of his death.

Nevertheless, he became firmly established in popular lore: Vasily Ivanovich became the hero of numerous jokes in which he permanently ends up in comic situations with his loyal assistant Petka and Anka the machine gunner. In this jocular guise he has been included as a character in by a dozen or so computer games. 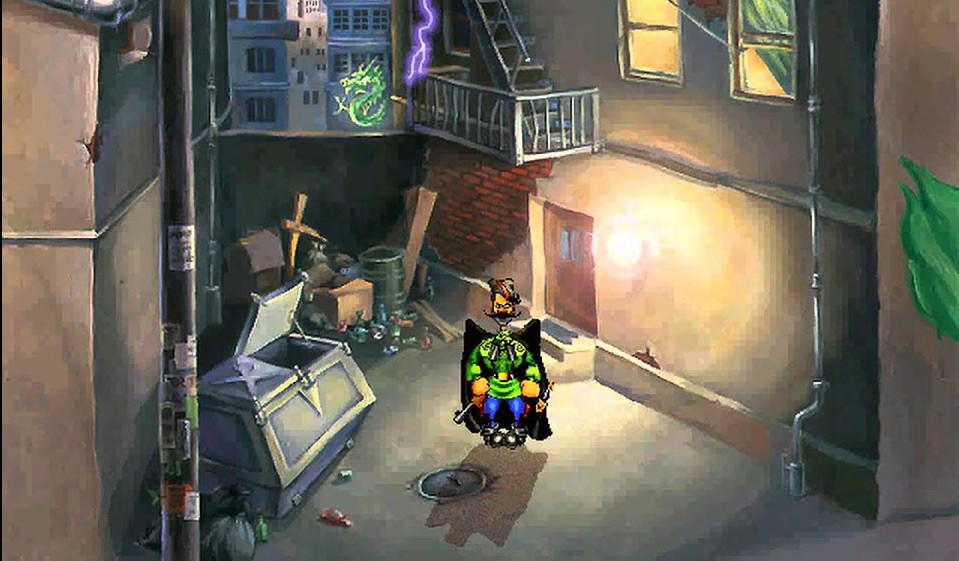 The image of the popular hero has also been used for a much more serious purpose. The legendary commander is one of the main protagonists of Viktor Pelevin's philosophical novel, Chapayev and the Void, which today has a cult following in Russia.