How much did Russian tsars drink? 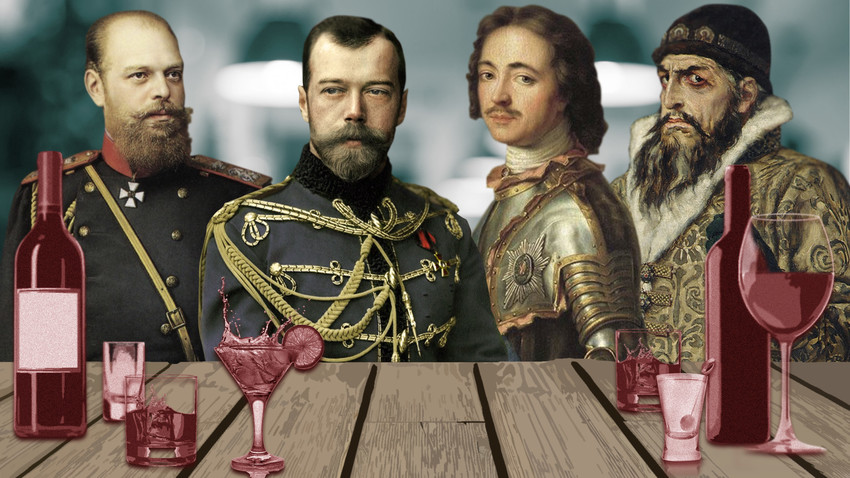 Tretyakov Gallery; Residence Museum; Getty Images; Freepik
None of the Russian tsars were alcoholics, but some of them could drink copious amounts of spirits. Which wines, vodkas, and other beverages did the Russian rulers prefer?

Legend has it that Peter the Great once drank the husband of his niece to death. Frederick William, Duke of Courland (1692-1711) married Anna Ioannovna (1693-1740), daughter of Peter’s brother Ivan (1666-1696), on October 31st, 1710, and two months of lavish parties in St. Petersburg and around it followed. By January, it was time for the newlyweds to travel to Courland, the husband’s home country, but before leaving, 18-year-old Frederick William, who had already been drinking for two months straight, decided to have a drinking contest with Tsar Peter himself. The next day, January 10th, Frederick William died en route, having traveled only 26 miles from St. Petersburg. Contemporaries believed alcohol poisoning was the main reason for his death.

Vodka was first distilled in the Moscow Kremlin on October 10th, 1503. Before that, vodka (then called aqua vita, Latin for the ‘water of life’) was bought from Europe and used as a medicine for colds and low blood pressure. In 1503, the first Russian distillery was built and production of Russian vodka began – first in small amounts and solely for the royal family.

We do not know much about the drinking habits of the Rurikid tsars, except for the mere fact that they drank. Ivan the Terrible frequently drank vodka, in his youth and later years, but it was Peter the Great who established vodka as a necessary alcoholic drink on the royal table during celebrations. 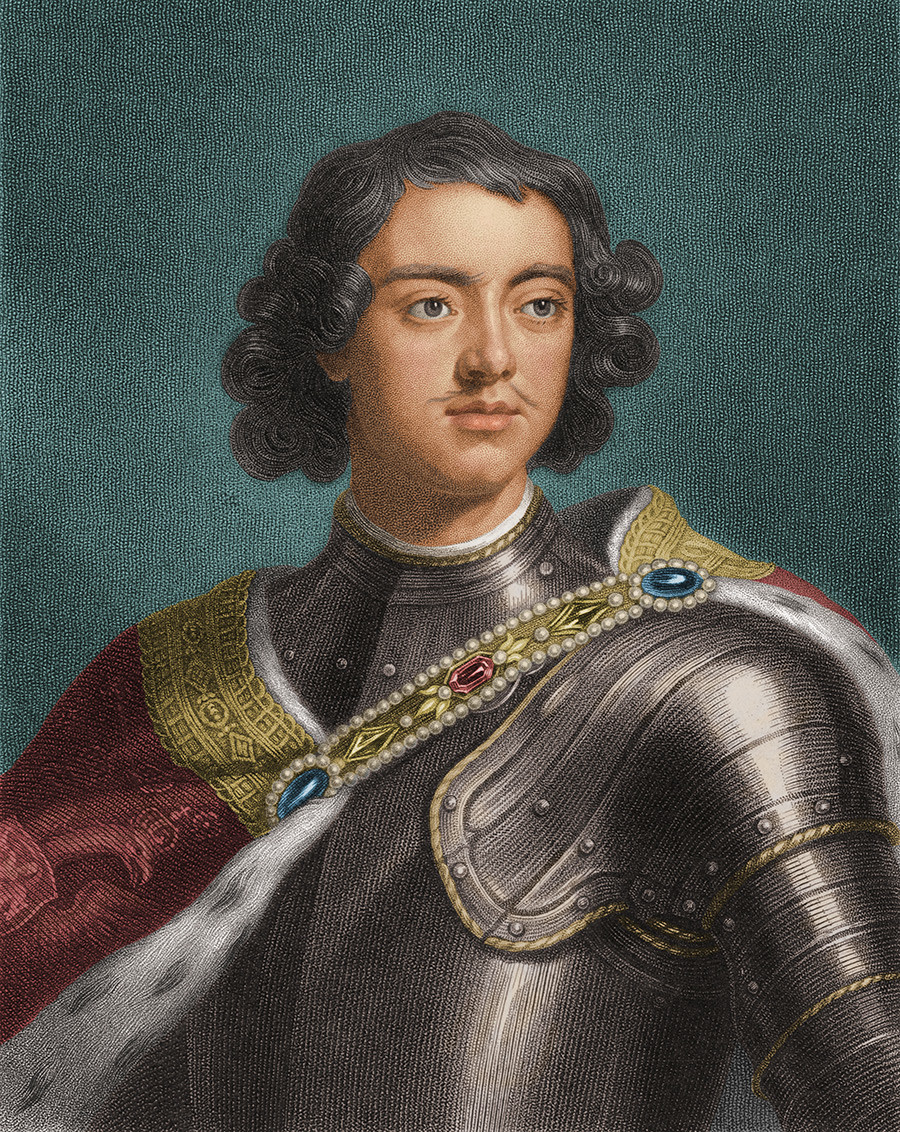 Tsar Peter started drinking as a teenager, in the German Quarter in Moscow. Russian chronicles registered that while visiting his European friends – Franz Lefort, Patrick Gordon, and others – the young tsar loved to drink with them. Boris Kurakin, Peter’s friend and companion, wrote about Peter’s pastimes in Lefort’s house in the German Quarter: “The debauchery started, drinking in amounts that can’t be described, for three days in a row, locked in the house, they drank so much that some died on the spot. And since those times until now [1705] the drinking goes on, and became popular among noble women also.”

Peter used to start his day with a shot of vodka, chased by a pickle. At his assemblies (that’s what he called royal parties) he instituted a rule – if a statesman arrived late for the event, he was forced to drink a whole Great Eagle Cup – 1.5 liters of vodka, more than 50 fluid ounces – in an instant.

Peter himself wasn’t shy of his drinking and personally confessed he sometimes drank until he lost his mind and memory: “I don’t remember how I left, because I was mighty delighted with the gift of Bacchus. This said, I beg everyone whom I have caused vexation to pardon me, especially those who were present at the time of my departure, may this occasion be forgotten…” Peter wrote in a letter to his relative, Count Fyodor Apraksin. 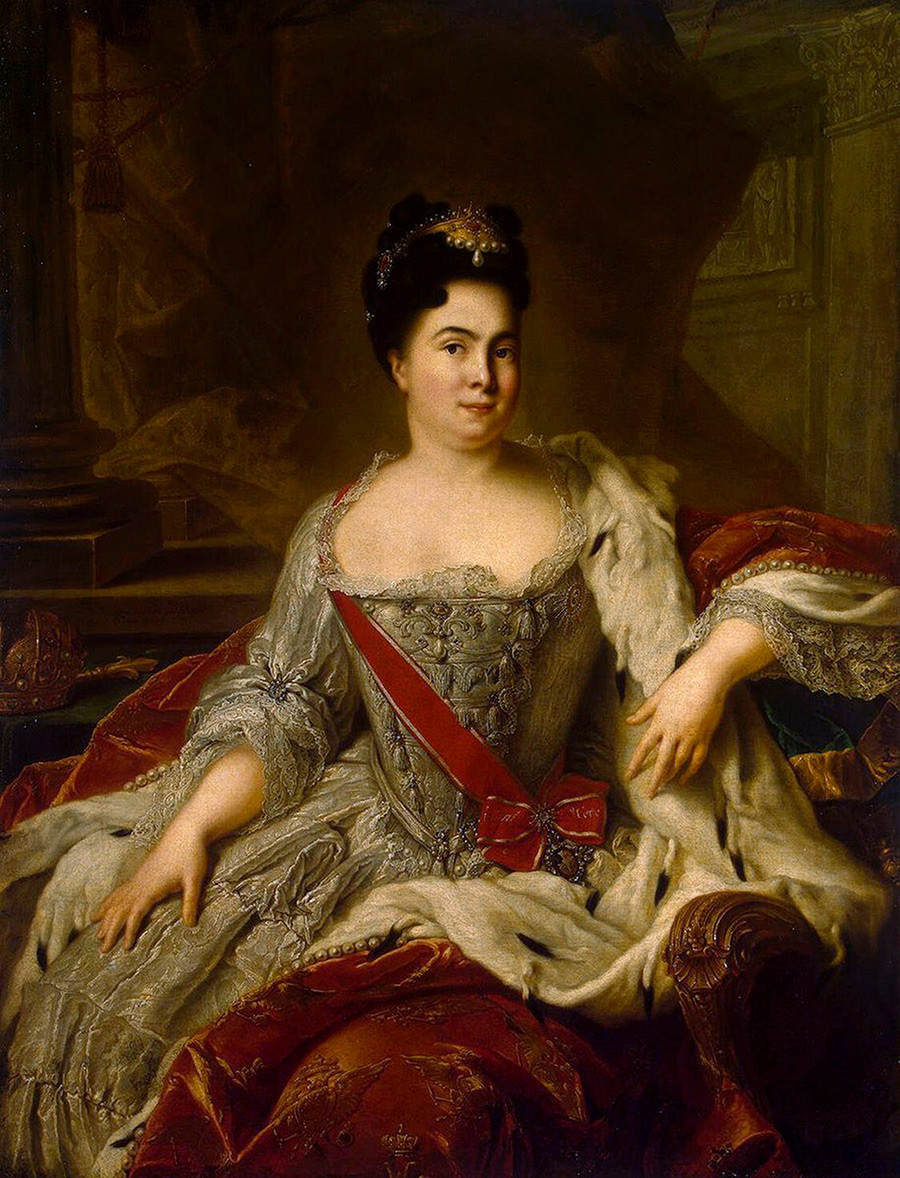 Catherine I, Peter’s wife who ascended the throne after his death, shared his love for alcohol. Jacques de Campredon, the first French ambassador in Russia, wrote in 1725, five months after Peter the Great’s death, that Catherine’s favorite pastime was “almost daily drinking parties, which last all night and a good part of the day.”

A secretary for the Saxonian embassy wrote that Catherine started her day with a portion of vodka (the Empress preferred vodka imported from Danzig), and by evening, switched to Hungarian wines. Historian Evgeniy Anisimov, one of the foremost experts on the epoch, wrote that “life wasting” was Catherine’s main occupation. 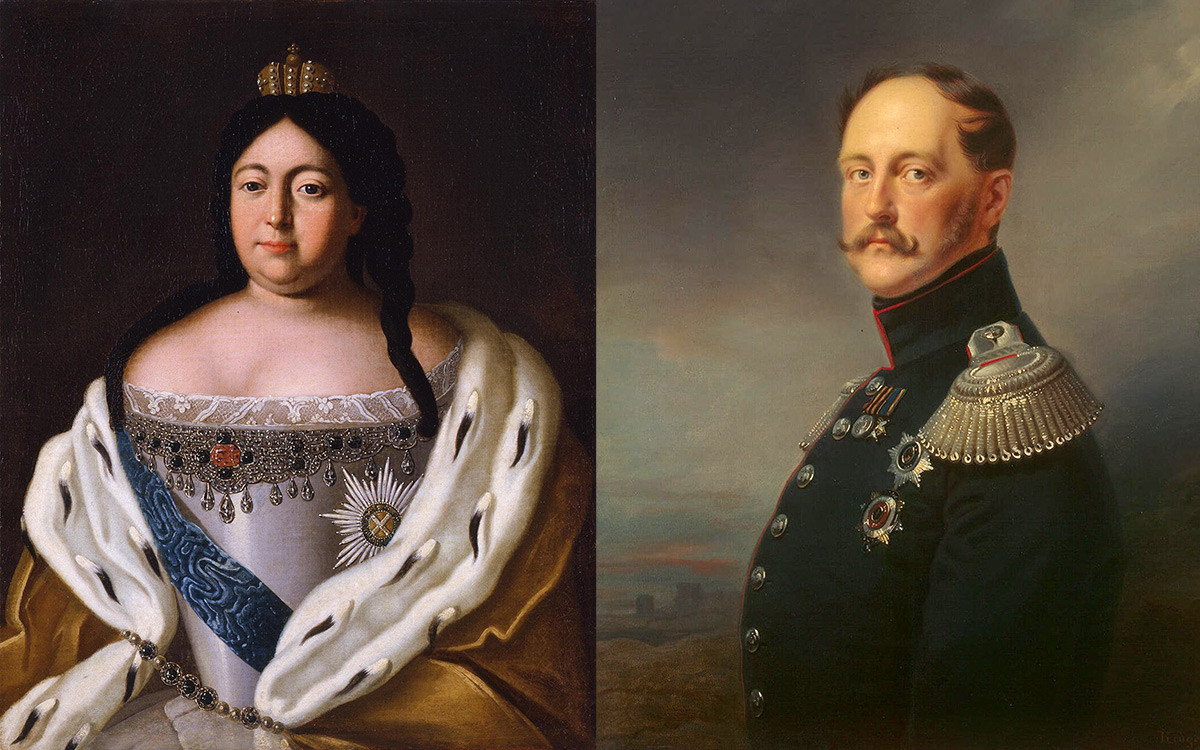 Obviously, not all Russian Emperors were fond of drinking. Anna Ioannovna, for example, detested alcohol altogether – quite explainable, considering how her husband died! Catherine the Great drank, but moderately – she preferred coffee to spirits.

We don’t know much about the drinking habits of Pavel I and his son Alexander I. Alexander’s brother and the next Emperor, Nicholas I, was a confirmed teetotaller – he didn’t drink wine even during official receptions organized in his honor, and during his visits to foreign countries, asked to replace wine in his glass with plain water – however, Nicholas didn’t object others drinking in his presence. 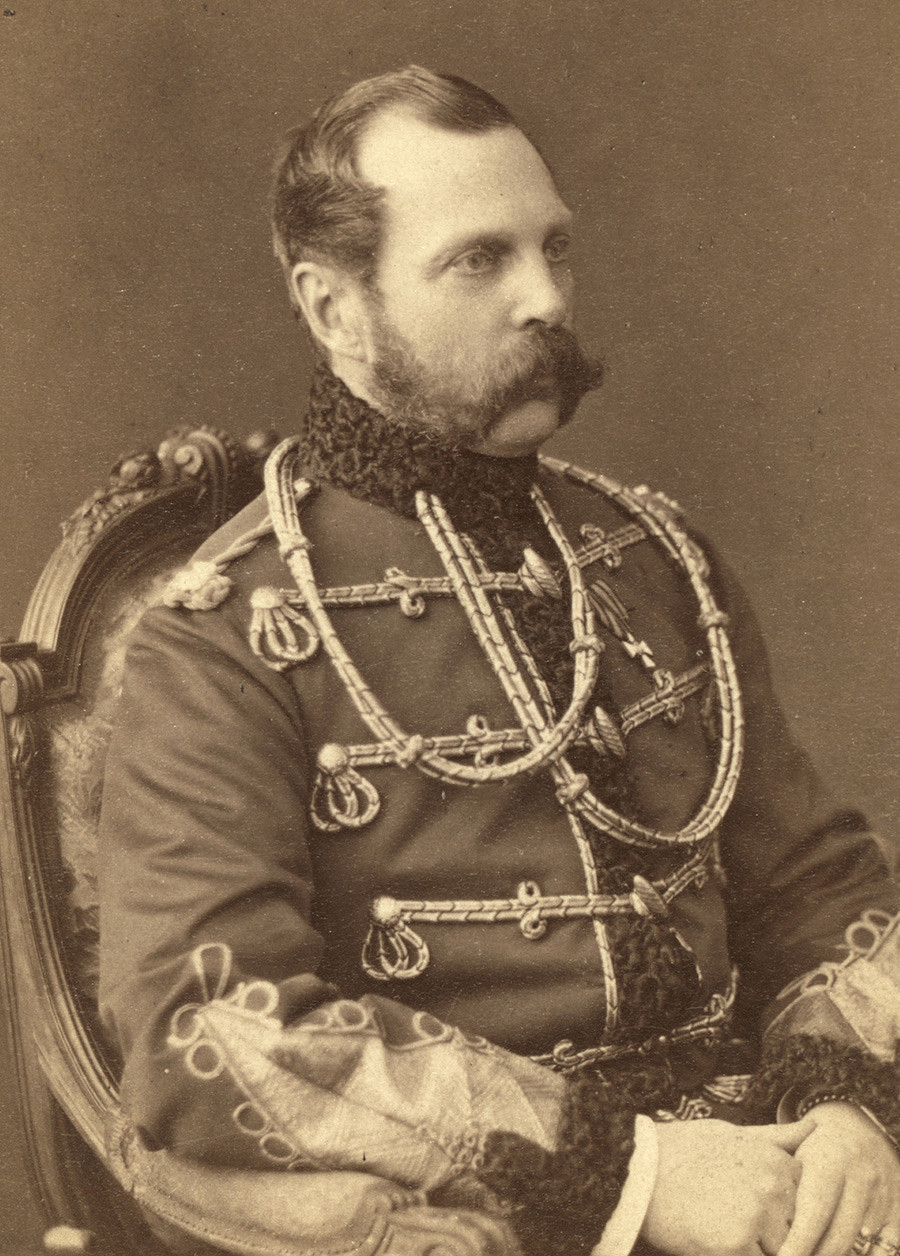 On the contrary, Nicholas’s son, Alexander II, wasn’t wary of alcohol – but he didn’t drink much vodka, preferring wines and champagne. Historian Igor Zimin quotes court documents that describe the Emperor’s evening table organized for the ball in the Emperor's presence on February 7th, 1871. There were 458 bottles in total, 219 of them – champagne, 173 – Chateau Lafitte, 8 – Madeira wine, 11 – sauterne, 9 bottles of sherry, and so on; there were only 2 bottles of vodka! 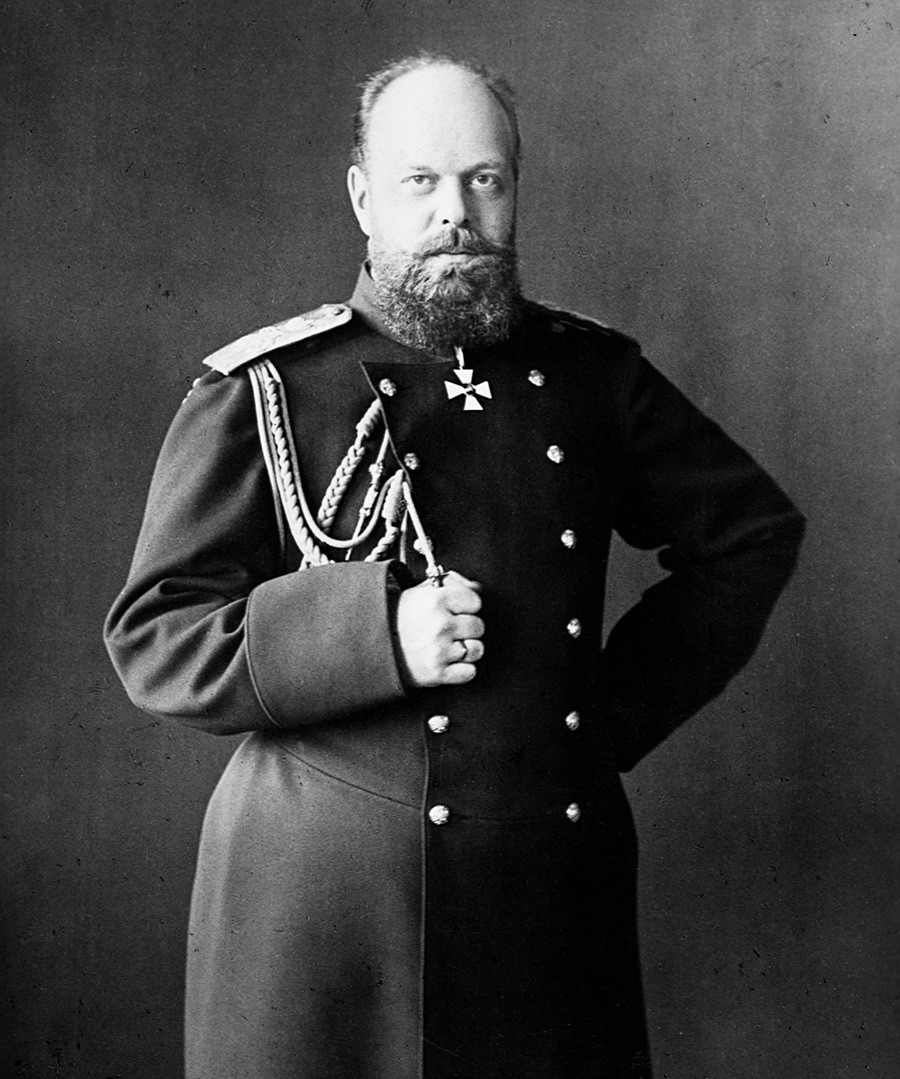 There is a popular belief in Russia that Alexander III was a drunkard and died of complications connected to drinking. Historian Igor Zimin proved this untrue. Indeed, Alexander III, who was a man of exceptional strength, drank and could drink a lot because of his weight – but he was never blind drunk.

General Pyotr Cherevin, the head of Alexander III’s security service, remembered that Alexander “could drink a lot without any signs of inebriety, except that he became [...] joyous and playful like a child. Count Sergey Sheremetev, Alexander’s lifelong friend, wrote: “He was moderate in drinking, but could drink a lot, was very sturdy and maybe never was totally drunk.”

Alexander’s favorite drink was Russian kvass mixed 50/50 with champagne. Among wines, he loved Madeira and Georgian wines of the Kakheti region, and was seen drinking whisky, vodkas, and Anisette liquor that he playfully called “farter.” 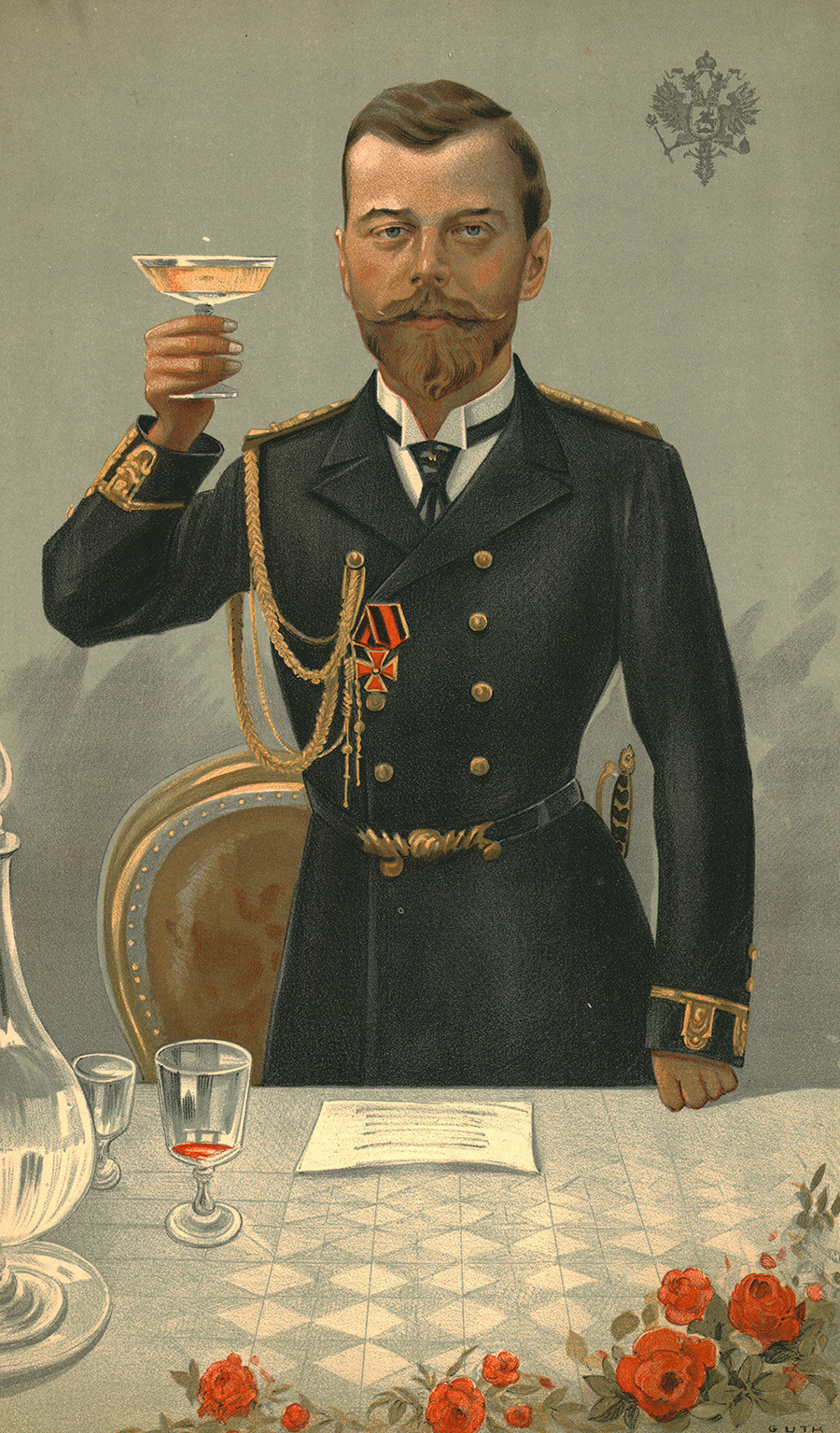 The last Russian Emperor was far from teetotal. In his diaries, he registered a lot of occasions of being drunk, and not without satisfaction. August 1904: “After driving around all the canteens of the lower ranks and fairly loaded with vodka, I reached the Officers' Assembly.” August 1906: “I tried six varieties of port wine and got slightly juiced, which made me sleep marvelously.”

Usually, Nicholas drank a little shot of vodka before breakfast and a glass of Madeira, or a couple of glasses of port wine during meals. He could drink 2-3 glasses of champagne, but almost never drank white or red wines. Vodka, port wine, and plum brandy are said to have been the three favorite drinks of Nicholas II.