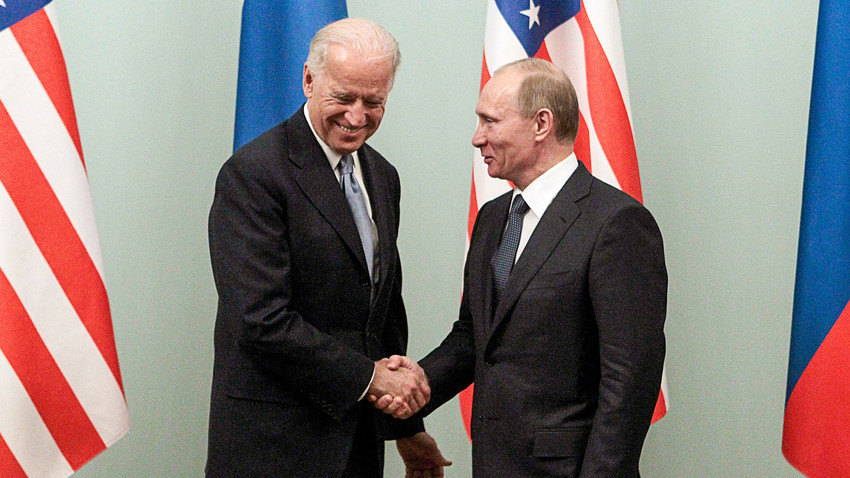 Reuters
He was even to offer Vladimir Putin an unlikely job, one theory claims.

The new President-elect of the U.S., according to most mainstream media, has a very long history in politics. He also has negotiations with Moscow on the list of his political endeavors. Peculiarly, Biden dealt with both the USSR and modern Russia. Here is a brief history of Joseph Biden’s relations with the country he recently called “the biggest threat to the United States right now”.

Joe Biden became a U.S. senator in 1972 and visited the USSR a year later in 1973. Six years later, in August 1979, he returned on an official visit. His destination in the Soviet Union was Leningrad (the city currently known as St. Petersburg) and the purpose was to convince fellow American Senators to support the strategic arms reduction deal between the U.S. and the USSR.

It was a time when the two superpowers were intertwined in complex negotiations amidst the general environment of distrust dictated by the Cold War. Biden, however, was a strong proponent of the Strategic Arms Limitations Talks between the U.S. and the USSR that became known as ‘SALT-II’.

Given the level of mutual distrust between the U.S. and the USSR, convincing the American hawks of the need to support the idea of negotiations with their ideological enemy was a tough undertaking the then young Joe Biden was set to make.

“In 1979, young Joe Biden was a defender of arms control in general and of the SALT II Treaty in particular. The purpose was, in large measure, to convince the wavering senators to support the treaty, which had been signed in June but awaited Senate ratification,” said Professor Peter Kuznick, an expert on twentieth-century American history.

“It is interesting to see the role played by a younger and apparently more progressive Joe Biden at the time. Biden had a strong belief in international treaties. He wanted to see deep cuts in nuclear arsenals and conventional weapons. He sought to defuse Cold War tensions,” said Kuznick.

During his August visit, Biden met with the key figures of the Soviet political establishment, including the Soviet leader Leonid Brezhnev, Premier Alexei Kosygin and renowned Soviet foreign minister Andrei Gromyko, among others.

Years later, Biden reminisced about his 1979 visit in a speech he had given to Russian students at the Moscow State University during his other visit to Russia in 2011:

“Brezhnev was ‘sicker than we thought’ then. He excused himself and left the meeting early and turned it over to Kosygin, Premier Kosygin, who in his opening statement said the following – I will never forget it – he said: ‘Before we begin our discussion, Senator, let’s agree that we do not trust you and you do not trust us. And we both have good reason’.”

Soviet press featured a short story on Biden’s trip to the USSR that was titled ‘Introduction to Leningrad’. The article in the Pravda newspaper spoke about Biden’s visit to the Piskaryovskoye Memorial Cemetery in Leningrad. 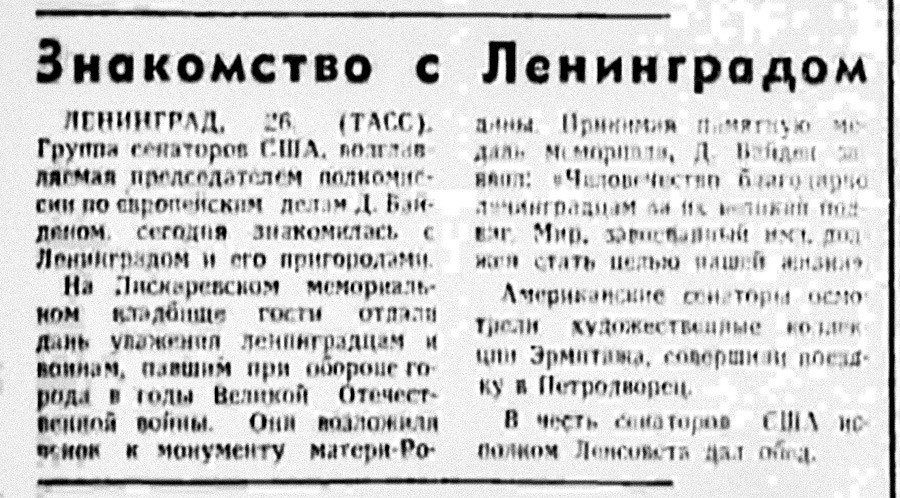 The article in the Pravda newspaper.

“Humanity is grateful to the people of Leningrad for their great feat. The peace they have won should be the goal of our lives,” Senator Biden was quoted as saying.

Biden visited the USSR again in 1988 as a member of the United States Senate Committee on Foreign Relations. One of the few remaining testimonies of Biden’s visit then is a few black and white photos of himself with Soviet foreign minister Andrei Gromyko. 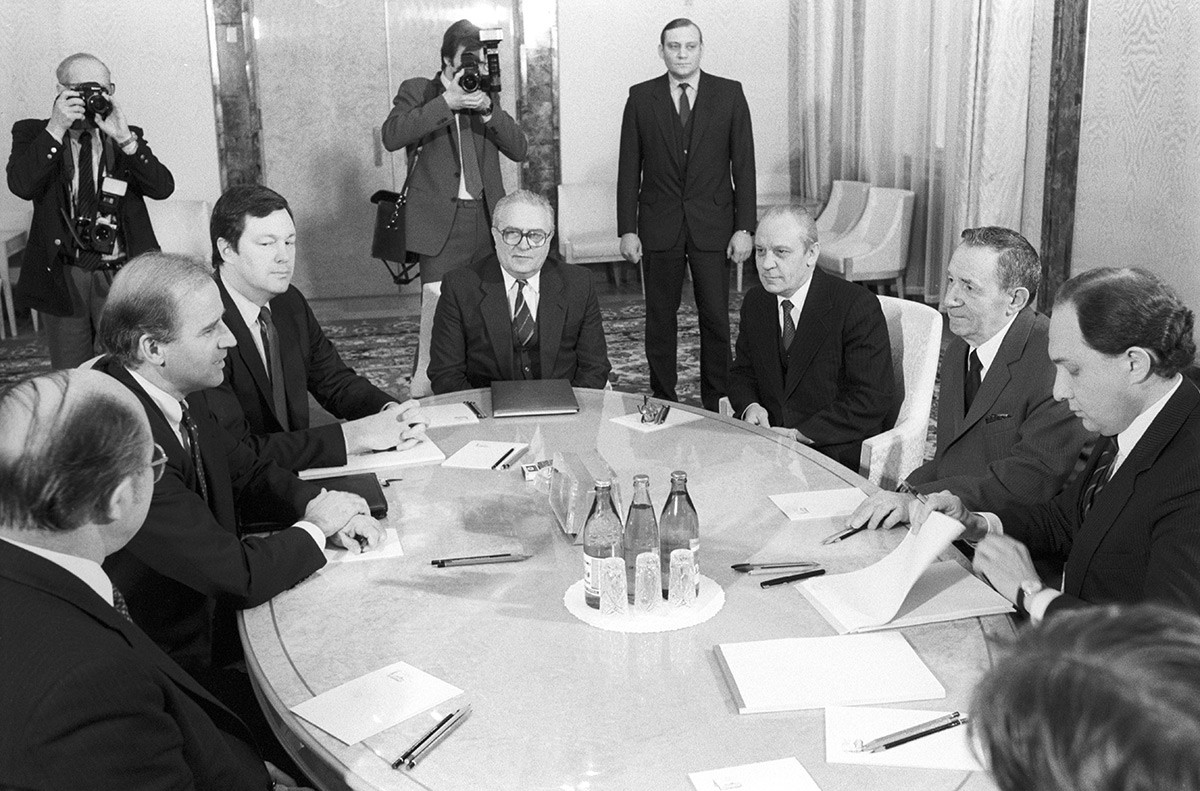 Senator Joseph Biden (second from left) of Delaware, Member of the Senate's the Foreign Relations Committee and Chairman of the USSR Supreme Soviet's Presidium Andrei Gromyko (second from right) during the negotiations in the Kremlin.

In the photos, Biden is seen smiling broadly, while Gromyko, known to be a reserved man and tough negotiator, looks rather gloomy shaking the Senator’s hand. 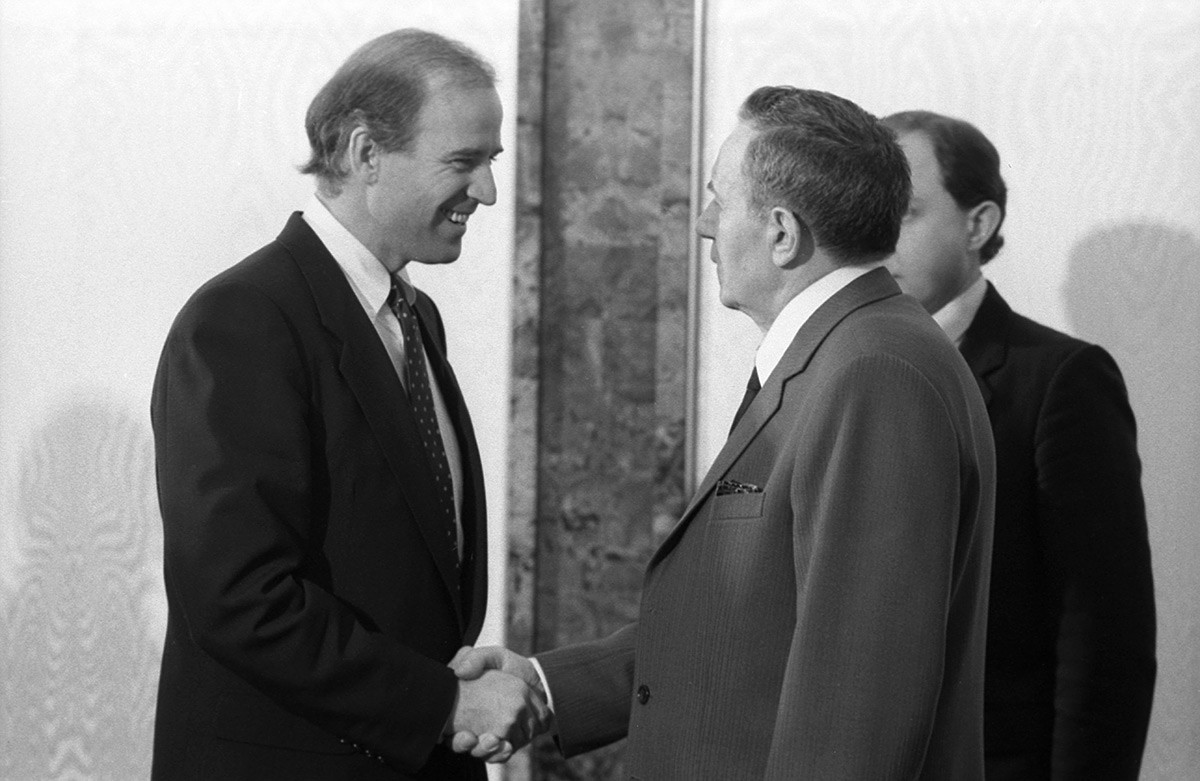 A job offer for Putin

As the Soviet Union collapsed, the Cold War ended and Biden advanced up the political ladder, he had to deal with newly independent Russia in the position as Vice President of the U.S. in the Obama administration.

In the first years, the Obama administration proposed a so-called policy of “reset” in relations between Moscow and Washington, aimed at normalizing U.S.-Russia relations after the Russo-Georgian War in August 2008. With Biden as Vice President, the two countries signed the crucial START treaty regulating nuclear arms reduction in 2010.

In 2011, Vice President Biden visited Moscow as Obama’s emissary, where he met President Dmitri Medvedev and Vladimir Putin, who then was serving as Russia’s Prime Minister. 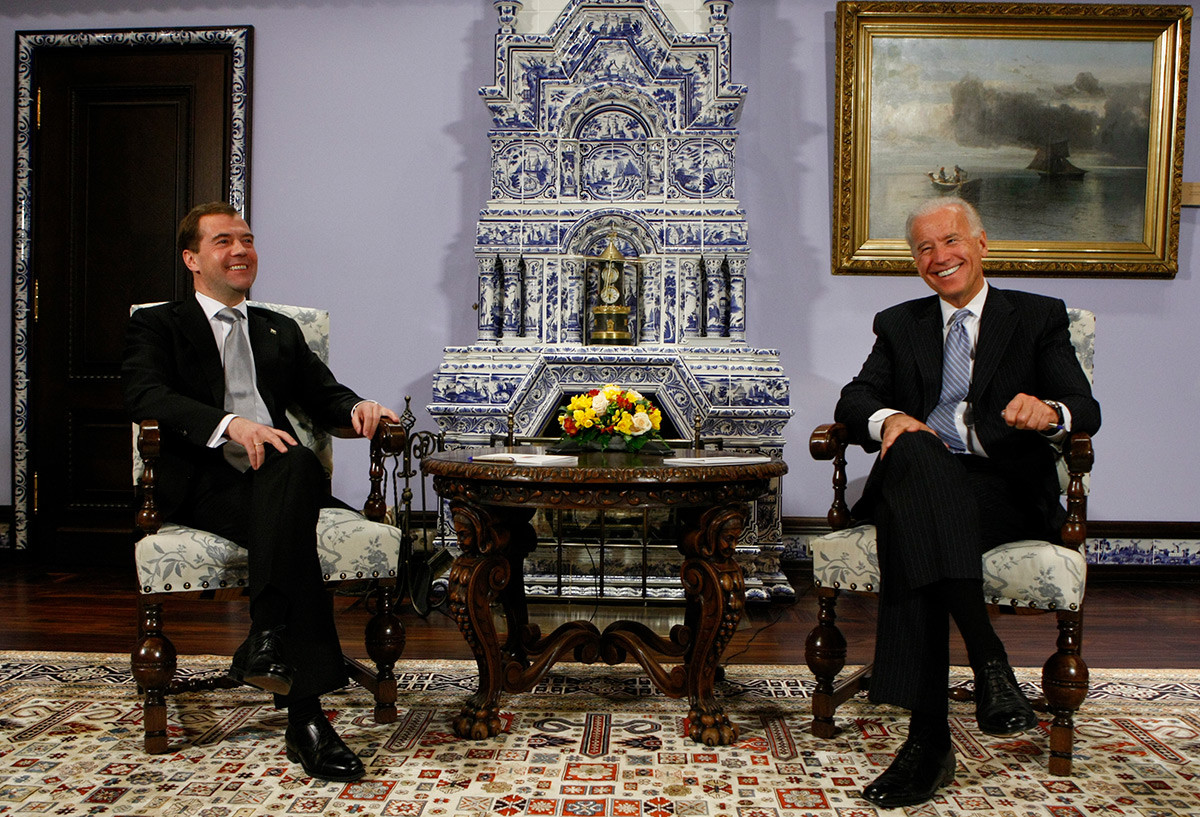 Biden made necessary preparations for Obama’s upcoming visit to Russia, discussed the future of the “reset” in the U.S.-Russia relations and perspectives of Russian WTO membership, met with Russian and American businessmen and gave the above-mentioned lecture to the students of the Moscow State University.

There had also been attempts to see through Biden’s official agenda by some of the Russian intellectuals. Renowned international relations expert and editor-in-chief of Russia in Global Affairs magazine Fyodor Lukyanov published an article (in Russian), where he outlined Biden’s plan to offer Vladimir Putin an unlikely job as NATO’s general secretary.

According to Lukyanov, during his 2011 visit to Moscow, Biden was to offer Putin, then Russia’s Prime Minister, the prestigious position in the alliance, in exchange for Russia’s military intervention in Libya. However far fetched the theory could have sounded, the author said it was confirmed to him by two independent sources in Brussels. 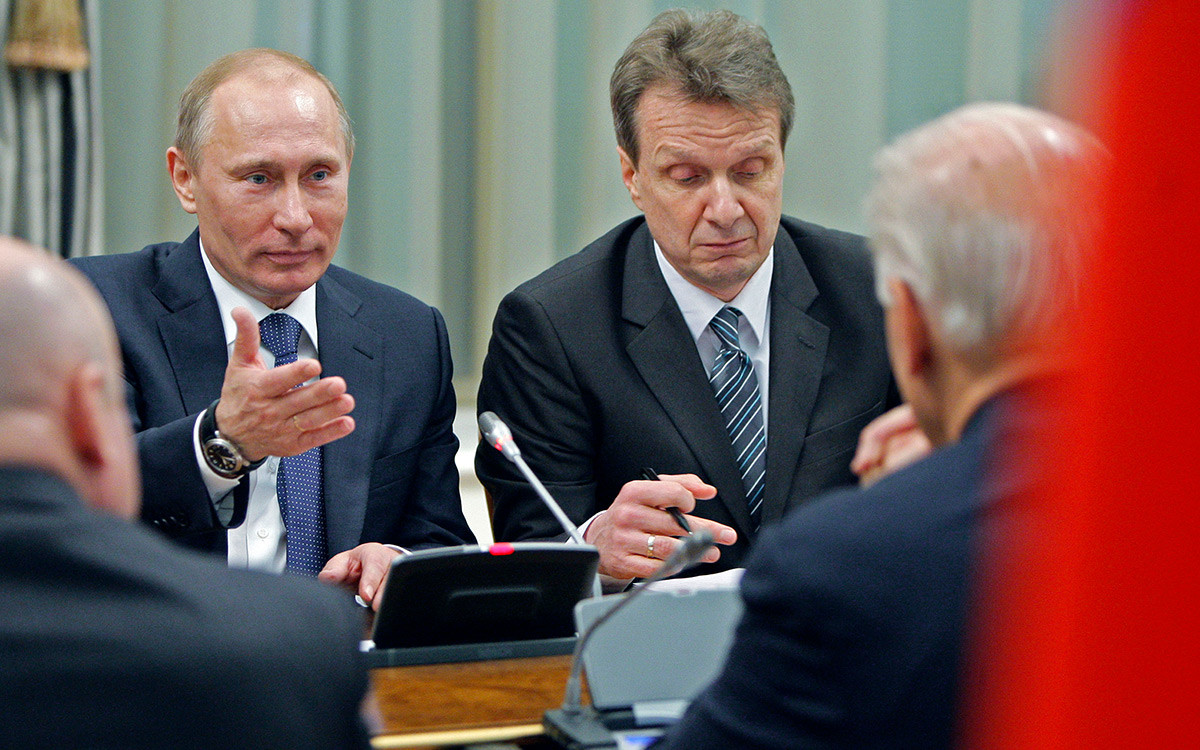 As we know, Russia opposed the military intervention in Libya that happened shortly after Biden’s visit in 2011 and Vladimir Putin, who returned to the presidency in 2012, never personally mentioned that such an offer was ever made.

Since 2011, Biden has grown increasingly suspicious of Moscow’s intentions and criticized Vladimir Putin’s foreign policy on several occasions, most recently calling Russia “the biggest threat to the United States right now” during the 2020 U.S. presidential debates.

Click here to read about Bernie Sanders’ honeymoon in the USSR.