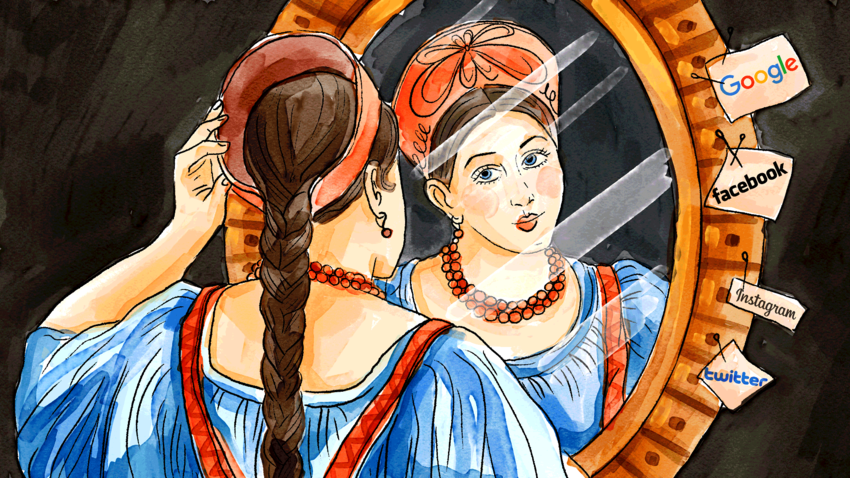 Irina Baranova
Amazingly, the Russian nobility of the 19th century could, too, show off their virtual “friends” and compete in the numbers of such friends. But it was all on… paper.

How often do you use Facebook to check on a friend who’s sick? Report to your circle that you’re back from a vacation or a business trip? Announce that you’re throwing a party? It’s surely easier to do this via text or a public FB post than to tell everyone separately. But people of the 19th century, and Russians, too, often needed to do the same things, and they had some similar ways to do them with their own paper social networks – the visiting cards. But first, there was a certain culture of private visits. 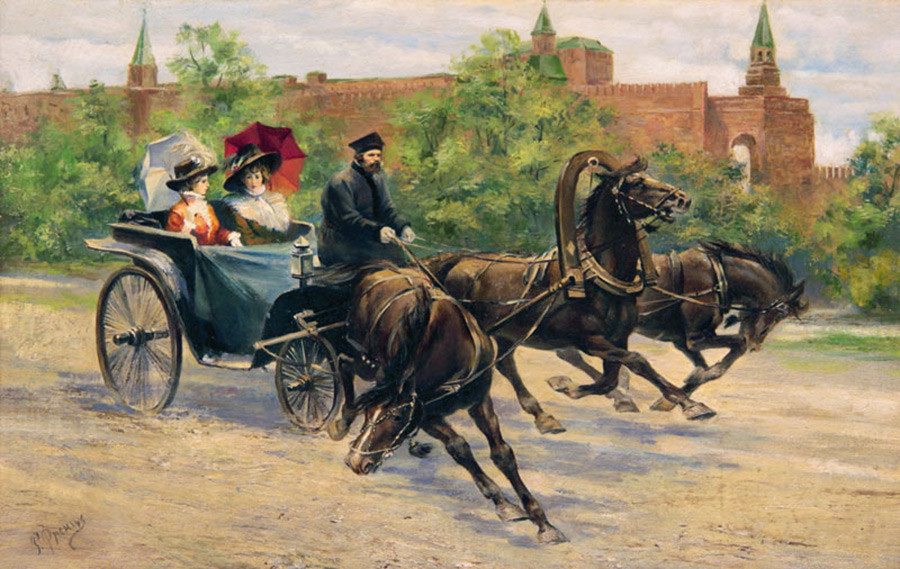 “On Thursday at 6 o'clock in the afternoon, Maria Ivanovna got into the carriage and set off on visits, with a register in her hand. On this day she made 11 visits, on Friday before lunch – 10, after lunch – 32, on Saturday – 10, 63 in total, and she left a dozen more for later” – wrote Russian historian Mikhail Gershenzon of the visit habit.

As you probably guessed, Maria Ivanovna paid visits of respect to her friends, acquaintances and relatives. In the Russian Empire of the 18th-19th centuries, this was the traditional way for noble persons to socialize. Noblemen had a certain circle of people whom they paid visits – their circle of friends and acquaintances, something like the people on their “Facebook feed.”

Without the tiresome habit of paying (and returning) visits, one could not hope to be accepted in noble society and enjoy all its benefits. Such as possibilities to find a good husband for one’s daughter, enroll your other kid in some Guards regiment, get promoted at your place of service because of a connection in the Imperial Court, etc.

It was socially expected to regularly visit your friends. Some noble families announced a special reception day, especially in St. Petersburg. In the more ‘traditional’ Moscow, you usually could pay somebody a visit on any given day. Visits were socially compulsory when an important event happened in your life – like a wedding. Mikhail Bouturlin, a Russian nobleman and a notable member of Moscow’s high society of the early 19th century, wrote about paying visits with his wife right after their wedding: “For the sake of the old stupid Moscow etiquette, which my mother-in-law observed, on the next day of our marriage, we were put in a carriage, in which we spent three whole days visiting all possible and impossible aunts, uncles, cousins and cousins... Oh, how I cursed this barbaric custom!” 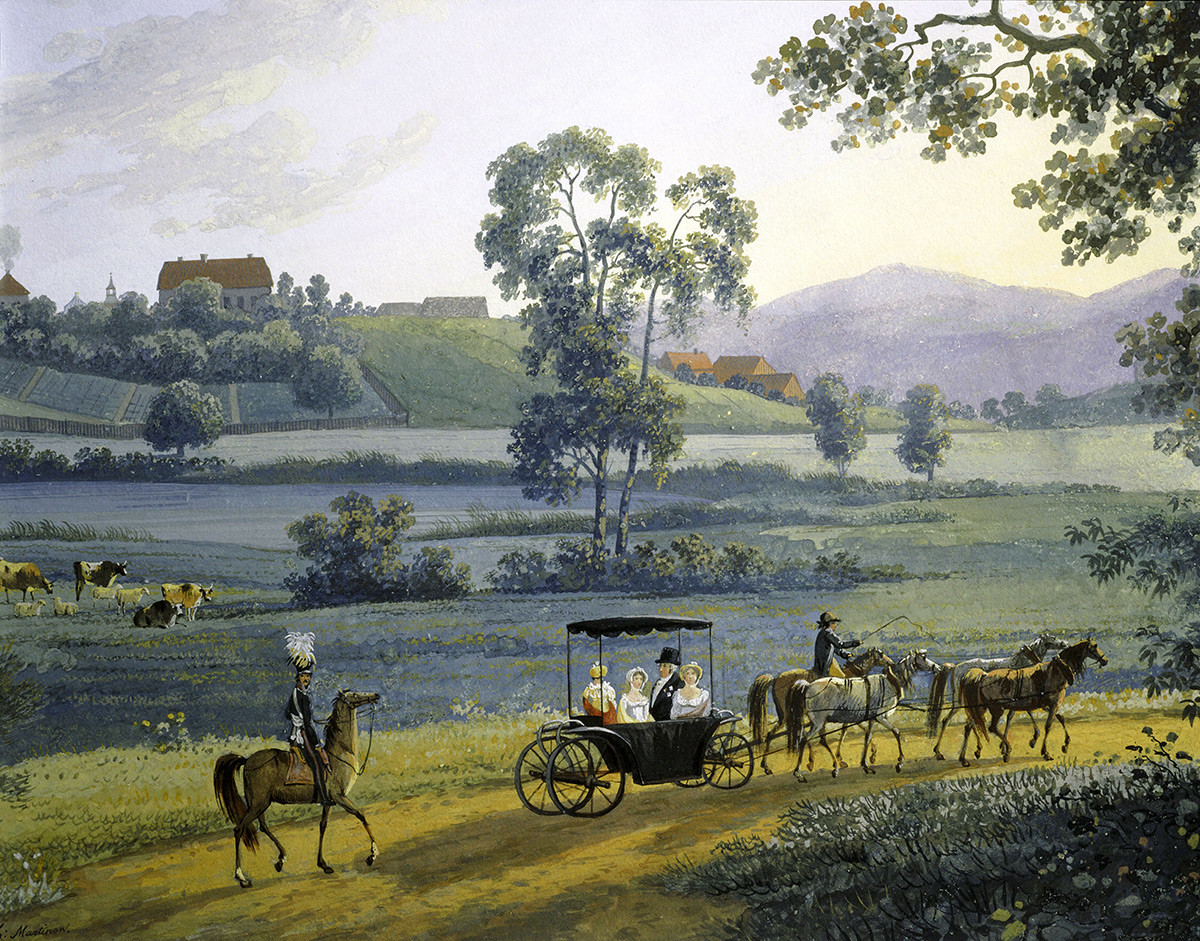 It was considered the height of ignorance to forget to congratulate a godmother or godfather on their name day, not to come see them off on their departure, to wish them a safe journey. Or, on the Sunday before the beginning of Lent, forget to visit the grandparents to ‘say goodbye’ before Lent, exchanging bread and salt. Visits of condolences (after somebody in your friend’s family dies), visits of congratulation, visits of gratitude, celebratory visits… It was all very tiresome. 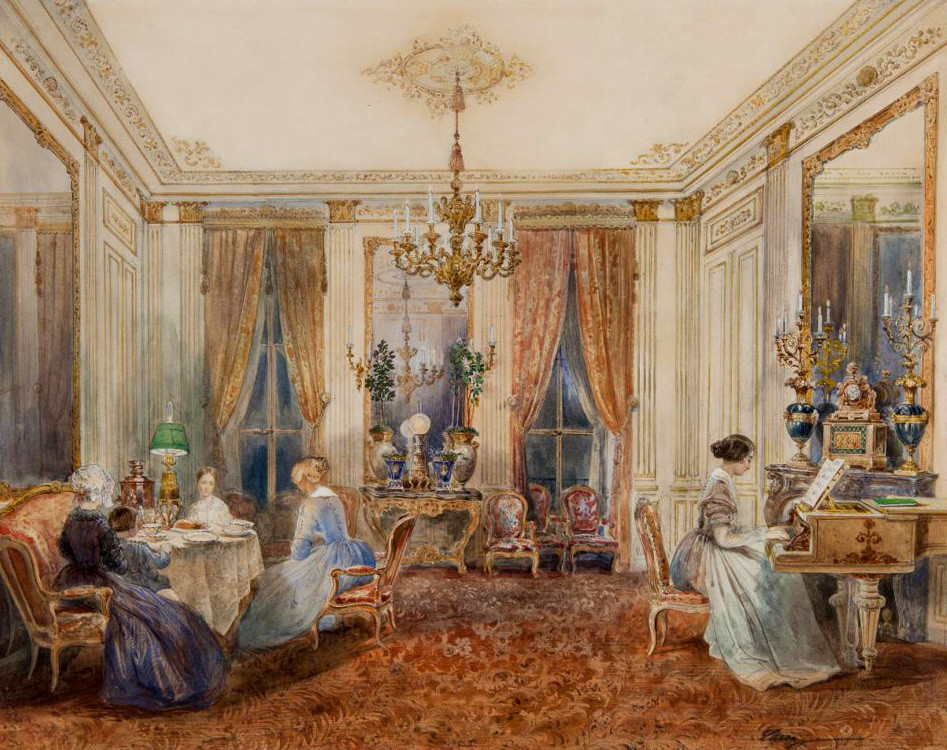 "Living room in the apartments of Countess Anna Sheremeteva on Boulevard Poissonnière in Paris," unknown painter, 1842

But what if you suddenly come to your friends and they’re not at home? Then, you must leave your personal visiting card. Slowly, sending visiting cards took the place of actual visits. This “trendy” custom came to Russia from England during the Anglomania craze – right after the war of 1812. It was a gesture of honor to come personally and leave your card at your friends’ or relatives’ place. It was rude to leave a card in the house of a person of higher rank – like, your boss. Such visits were paid in person, the old-fashioned way. For less important addressees, one could even send a footman to bring the card.

“On the New Year and on the Bright Week it’s the biggest expense for visiting cards,” wrote Sergey Knyazkov (1873-1919), a Russian historian. “The footmen in the carriage, on horseback and on foot prowl around the city. Moscow is so big that this delivery of cards is sometimes very difficult and painful… However, the ‘card-carriers’ find a way to ease their labors: they have places of gathering in Okhotny Ryad, where they compare their lists of places where they should bring the cards and exchange the cards. Of course, this is not always error-free. Sometimes you will be given a card of some gentleman with whom you are not familiar at all, or you will be forced to congratulate a person whom you wouldn’t like to meet...” 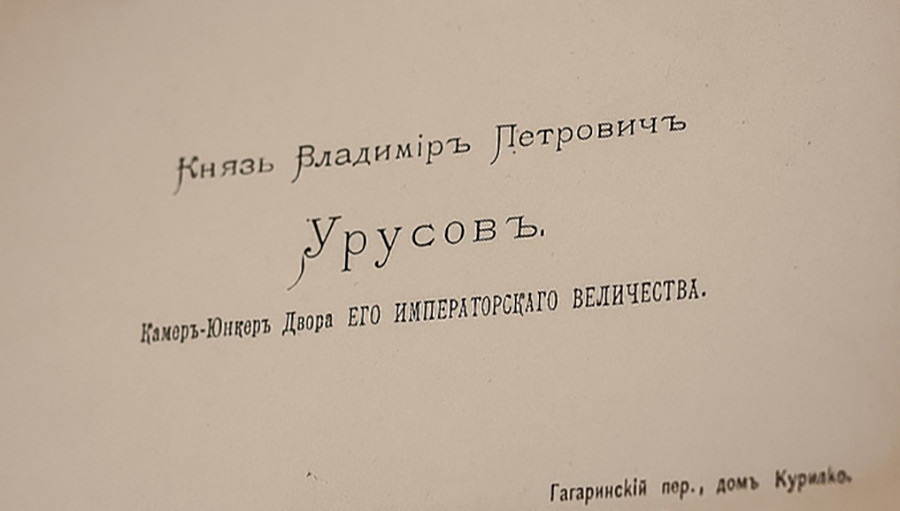 The cards, decorated with vignettes and lettering, were usually piled somewhere in the entrance hall of a rich house – either on a coffee table or tucked behind the mirror; so when a guest was coming, while he waited for the servants to tell the host he’s got a visitor, the guest could assess the popularity and social ties of his host by looking at the cards. 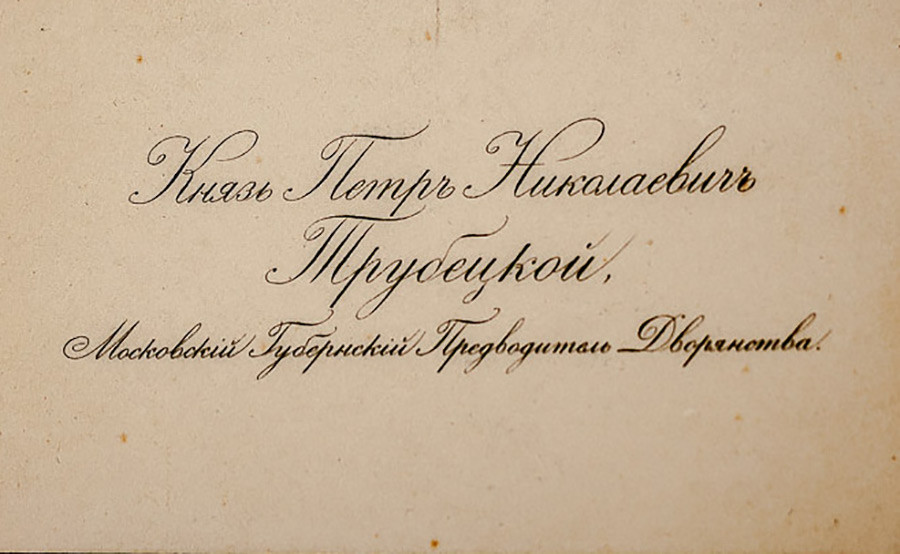 The fashion mongers of the era flaunted each other with a set of business cards from famous and popular people, just as some people now flaunt how many Facebook stars they are friends with!

Some people even paid the doormen in rich people’s houses for visiting cards of famous persons – princes, counts, rich businessmen – to tuck these cards behind their mirrors and make their guests believe they are sometimes visited by such ‘posh’ persons. 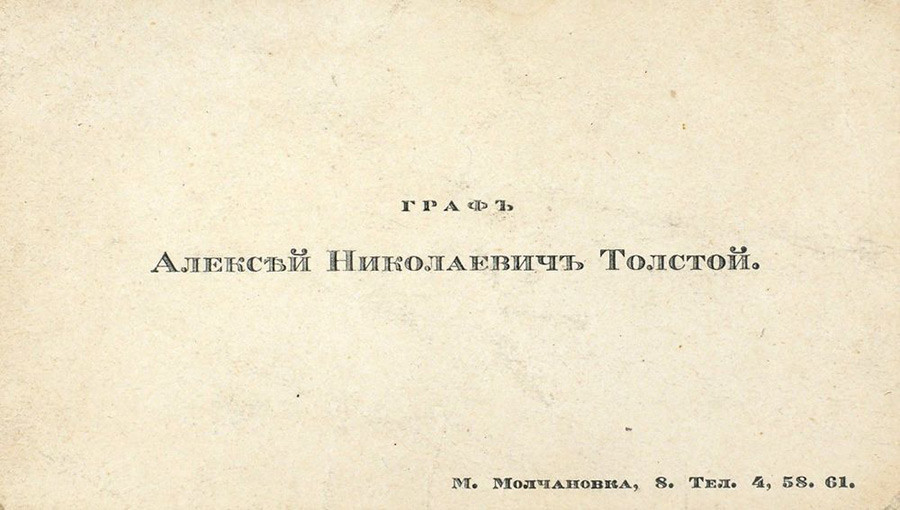 For those who couldn’t afford servants to transport the cards, this became another tiresome habit. “In our province, it’s like that: Heaven forbid anyone forget to bring a visiting card to one’s friends on a Church holiday! Instead of praying like a Christian, listening to mass, and peacefully celebrating the holiday with their families, ladies and gentlemen, from morning to two o'clock in the afternoon, gallop, scurry from street to street, meet, bow to each other, and after delivering the cards to relatives and friends, return home – with a cold, annoyance and boredom,” a popular magazine wrote in 1823.

But in the second half of the century, with the installation of telephones, which began in the 1880s, visiting cards became less and less important – although wealthy and well-bred noble families still clung to them, as an old-fashioned habit, until the 1910s.