3 most successful operations of the ‘Black Death’ marines 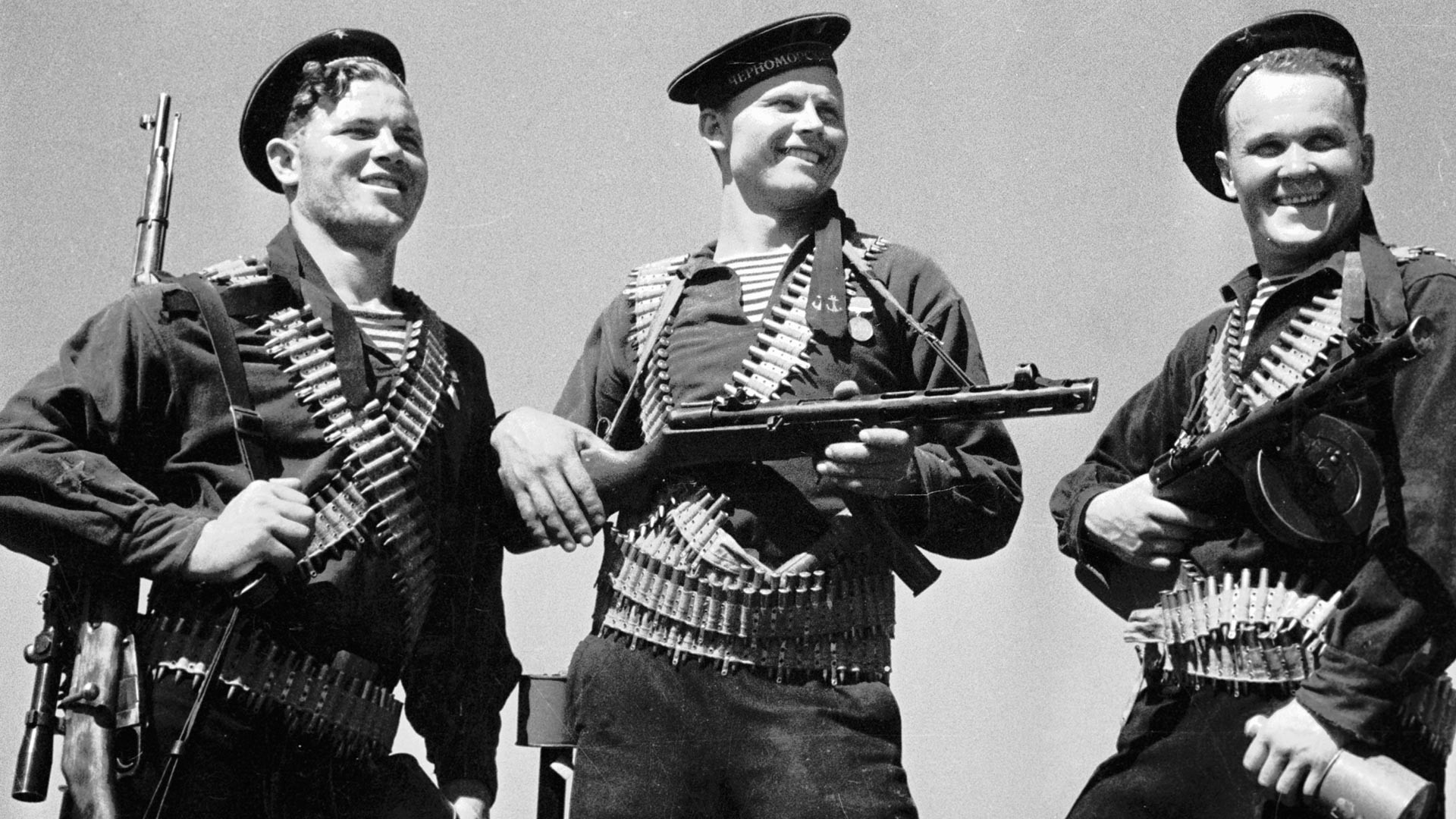 Maks Alpert/Sputnik
Of all the Soviet troops of World War II, the naval infantry were among the most stalwart and combat capable. Paying tribute to their enemy, the Germans nicknamed them the "Black Death". 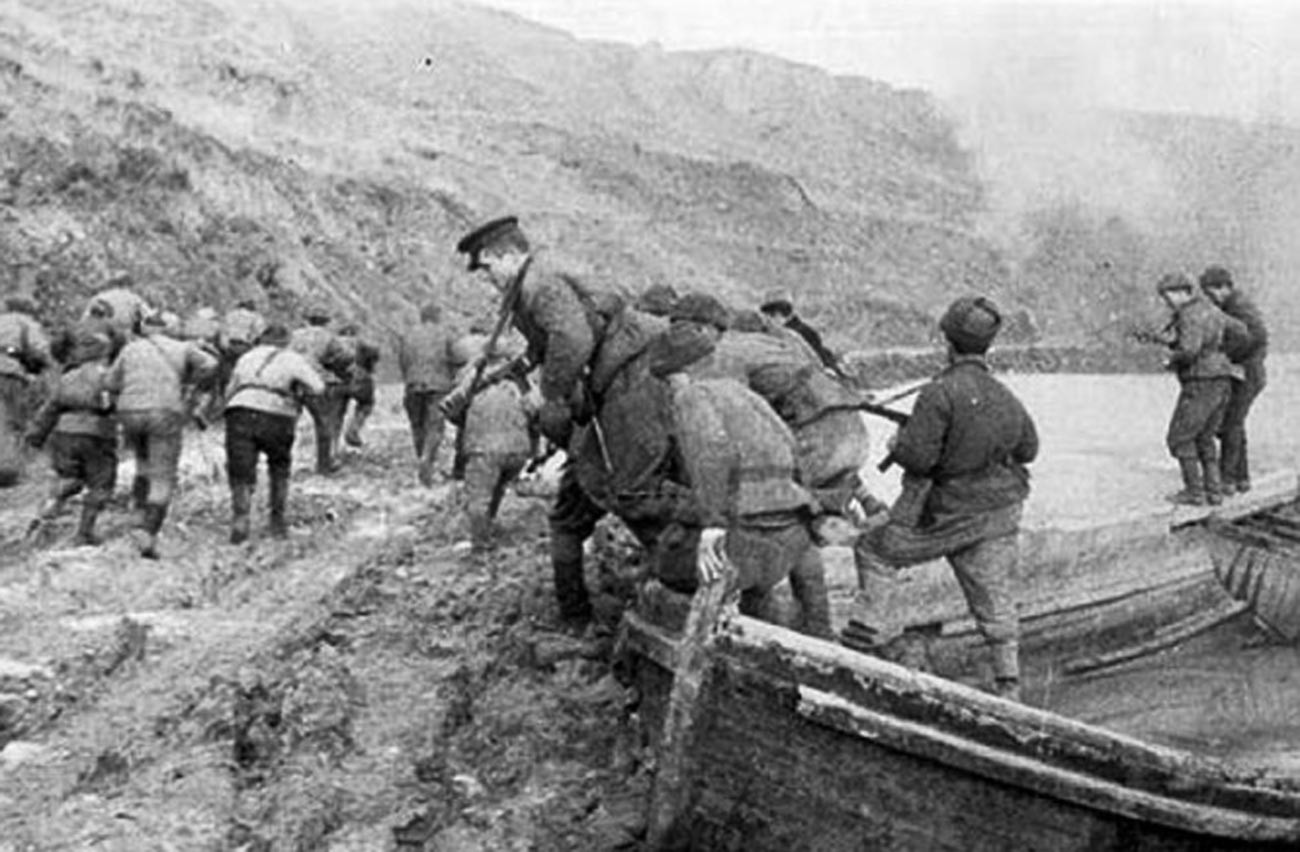 In the autumn of 1943, Soviet troops began the liberation of Crimea by landing two massive assault forces in its eastern part — north and south of Kerch, near the settlement of Eltigen. The two groups were to move towards each other, capture the city and create a bridgehead for a subsequent offensive on the peninsula.

The Kerch-Eltigen Operation was one of the biggest amphibious operations of World War II, involving up to 150,000 Soviet troops. They were opposed by 80,000 Germans, reinforced by Romanian cavalry and mountaineer riflemen.

The marines of the Black Sea Fleet were the strike force of the landing. They were followed by rifle divisions of the North Caucasus Front. "Who else but they could go in front and lead men experiencing a sea operation and fierce fighting for a strip of shoreline for the first time…" Admiral Nikolai Kuznetsov, the Soviet Navy commander, wrote in his memoirs.

In poor weather conditions, under heavy enemy fire, they jumped from their boats, got over barbed wire entanglements in the water and on shore, and made their way through minefields. A group of fighters from the 386th Independent Naval Infantry Battalion, having captured an anti-tank ditch, repelled 19 tank attacks in the course of four hours.

Fierce fighting went on for a month. On Dec. 6, 1,700 exhausted and hungry troops covertly crossed a swamp near Eltigen regarded as impassable and reached the southern outskirts of Kerch. But due to the impossibility of providing them with supplies, they soon had to be evacuated.

The second landing group was doing much better. They managed to seize a vast bridgehead northeast of the city and entrench themselves there, successfully repelling all enemy attacks. In the spring of 1944, Soviet troops launched an offensive in this sector, which, together with a simultaneous offensive launched from the mainland across the Perekop Isthmus, led to the swift defeat of all German and Romanian forces in Crimea. 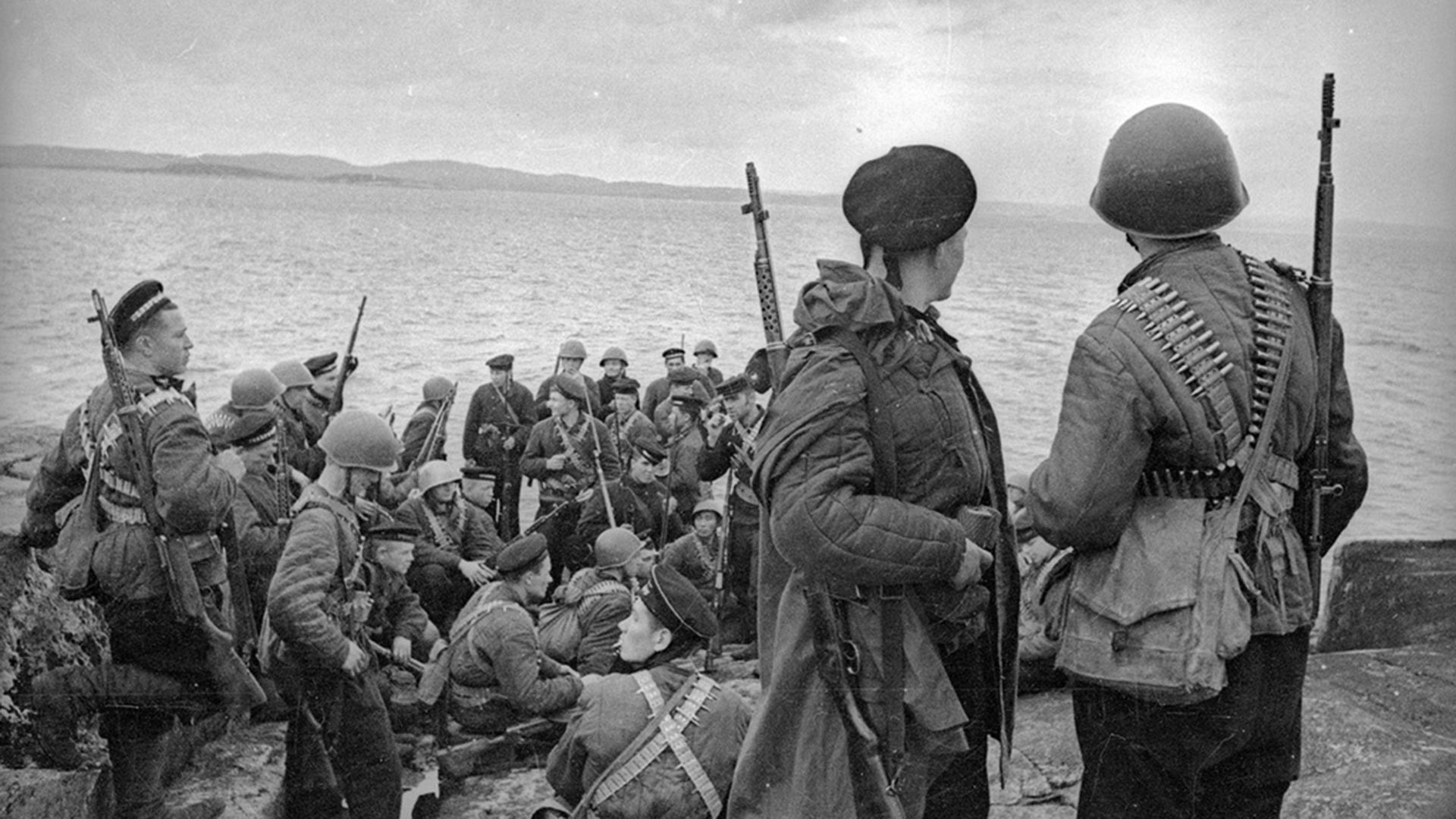 By the end of September 1944, all of mainland Estonia had been liberated by the Red Army. At the same time, the Moonsund Islands situated off the coast were still held by the Germans, who had concentrated more than 11,000 soldiers there.

"We strove to take possession of the Moonsund Islands from the outset," wrote the commander of the Baltic Fleet, Admiral Vladimir Tributs. “The reality was that by using earlier-constructed anti-amphibious assault fortifications and building new ones, the enemy could reckon on putting up a protracted defence with numerically small garrisons of ground forces. What is more, they could count on support by sea from a significant force of surface ships. If time had been lost, the Moonsund Archipelago would have had to be liberated at great cost, entailing enormous material losses and, most importantly, major casualties.”

On Sept. 27 a marine battalion, in an impromptu operation, took just five hours to seize the island of Worms (present-day Vormsi), and on Sept. 30 the island of Moon (Muhu) was liberated. This turn of events came as a real shock to the Germans. Military tribunal investigators even went to Ezel (Saaremaa), the largest island in the archipelago, to determine who was responsible.

After the successful landing on the island of Dagö (Hiiumaa) on Oct. 2, a brigade of marines, two infantry corps and ships of the Baltic Fleet were able to concentrate on the last island remaining in enemy hands — Ezel. The landing of marines that began on Oct. 5 was so successful that within 60 hours a large part of the island was already in Soviet hands.

The Germans, however, succeeded in entrenching themselves on the Syrva Peninsula, establishing a deep defense here. What is more, they were supported by more than 100 Kriegsmarine ships and the Luftwaffe’s Air Fleet 1.

After a month and a half of entrenched fighting, on Nov. 18 Soviet troops went on the offensive and broke through enemy positions. By Nov. 24, Ezel was fully liberated from the enemy, and the Soviet Baltic Fleet took the gulfs of Finland and Riga entirely under its control. 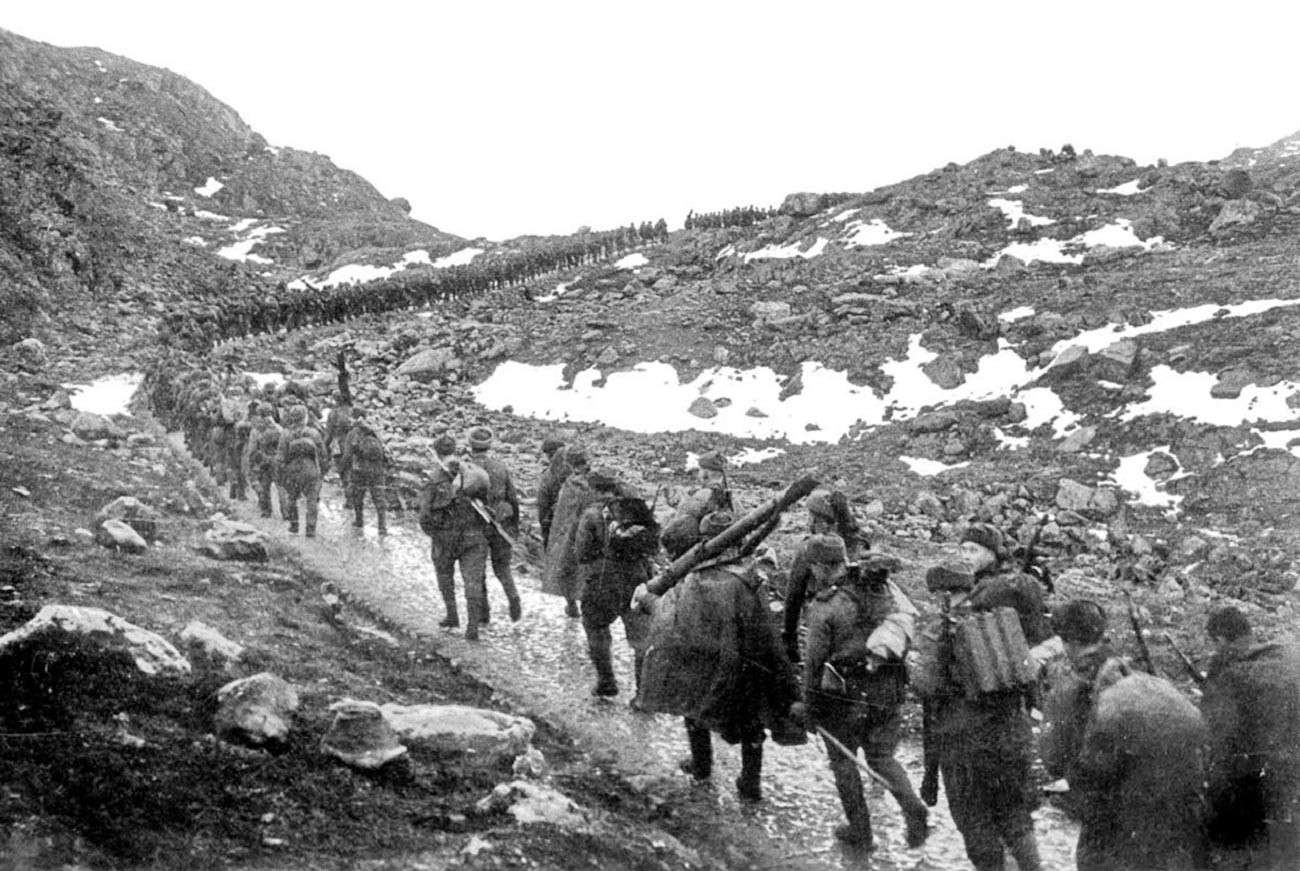 When on Sept. 19, 1944 Finland withdrew from the war, the position of the Germans in the Soviet Arctic substantially changed for the worse. Nevertheless, they were intent on defending to the last those areas near Murmansk and Petsamo (modern-day Pechenga). The latter had been ceded to the USSR by the Finns under the terms of the Moscow Armistice. These areas had sources of nickel and copper important for German industry, and ice-free ports important for the Kriegsmarine.

"Our reconnaissance was constantly reporting that the enemy's special construction units were drilling into granite round the clock, building new ferro-concrete and armored gun nests and emplacements, and laying dug-in positions and connecting trenches," wrote Marshal Kirill Meretskov, then commander of the troops of the Karelian Front. "Before us, on a front 90 km long, stretched obstacles and anti-tank ditches, dense minefields and barbed-wire entanglements. They covered all the upland passes, valleys and roads, and commanding heights were real mountain fortresses."

An important role in the operation was played by the Northern Fleet and its marines. While the main forces were advancing on land, the marines covertly came ashore behind enemy positions. On Oct. 12 a commando team led by Ivan Barchenko-Yemelyanov seized two German batteries on Cape Krestovy, with minimal losses, to support the successful landing of Soviet troops in Liinakhamari.

On Oct. 22, having liberated Soviet territory, the Red Army crossed the Norwegian state border. As before, its successful advance was assisted by beach landings of marines. A week later, Soviet troops ceased their advance and the further liberation of the northern part of the kingdom was left in the hands of Norwegian military contingents that had been formed in exile, as well as local resistance forces.