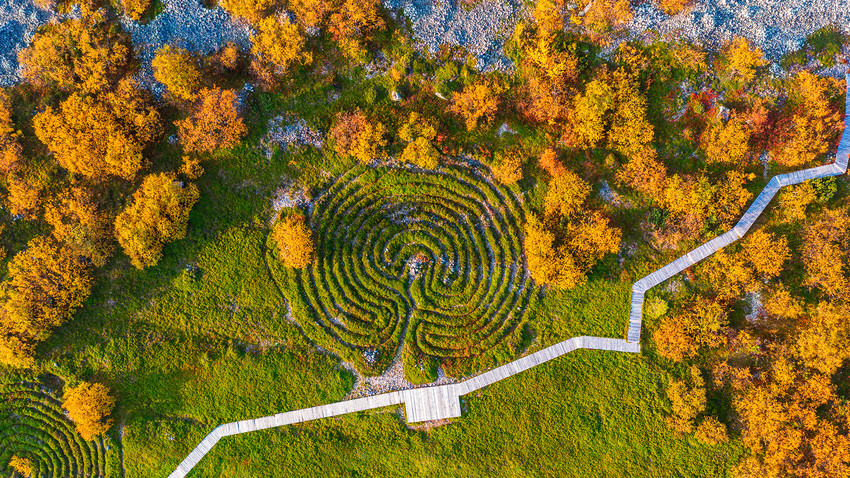 Ilya Timin/Sputnik
A land of bronze-producing towns, cult stone labyrinths, stone-cut temples, the oldest chariots and megalithic tombs – here’s a list of the most amazing prehistoric sites in Russia. Only verified information, no myths. 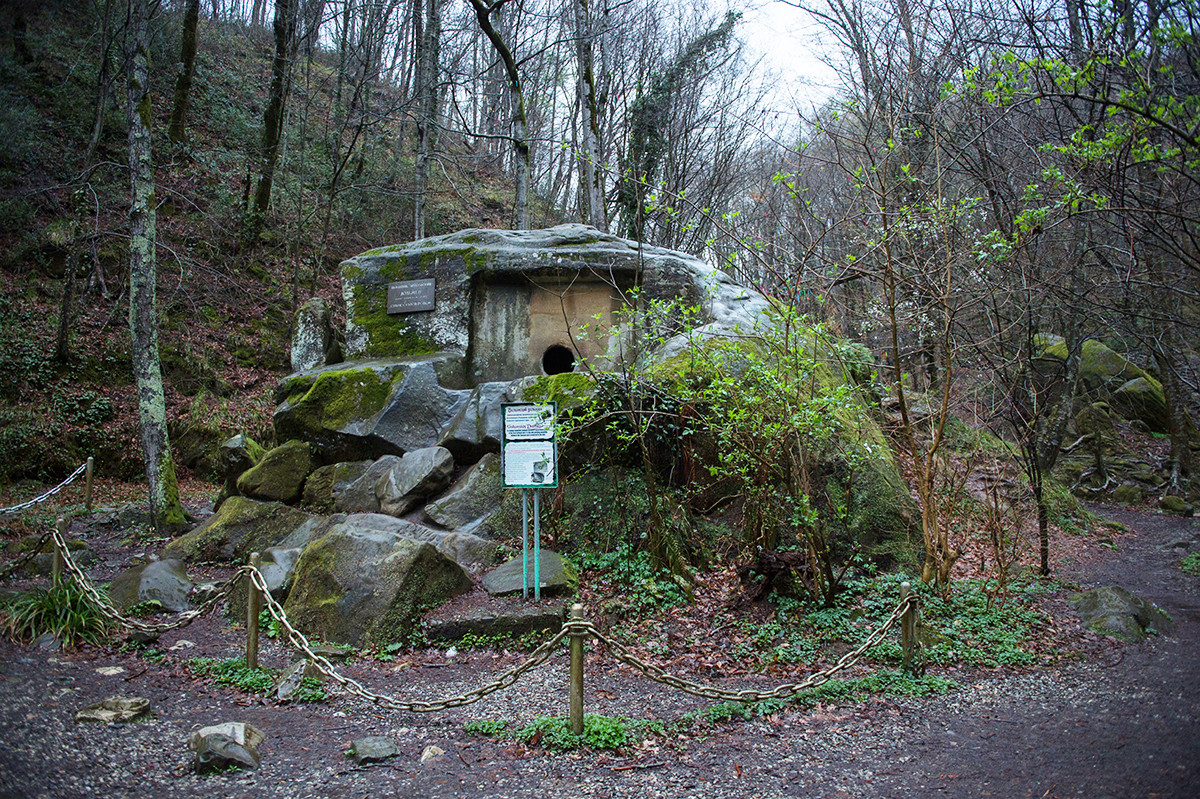 Dolmens, megalithic tombs or shrines, are so numerous in the Caucasus mountains that scientists talk about special “dolmen culture” that existed in the Western Caucasus around 2500-2000 BC. There are about 3,000 dolmens – monuments of the era, only six percent of which have been excavated or studied. They’re usually like houses made of large stone slabs with holes on the front slab. The holes are closed with a stone stopper. 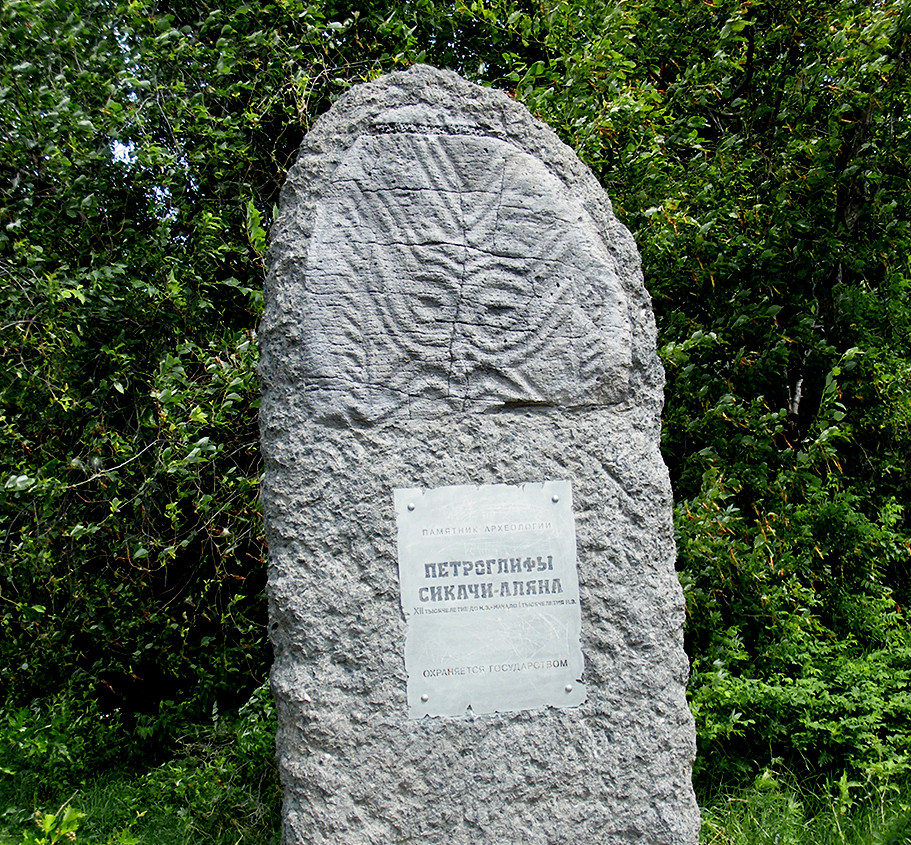 Petroglyphs, the prehistoric stone carvings depicting animals or sacred symbols, can be found in many parts of Russia: in Altai Region, in different parts of Karelia, in the Argun Canyon in Chechnya, near the Kanozero Lake in Murmansk Region… Perhaps Russia’s most impressive petroglyphs, dating back to 12000-9000 BC, can be found in the Russian Far East – 75 kilometers north of Khabarovsk in the Nanai village of Sikachi-Alyan. 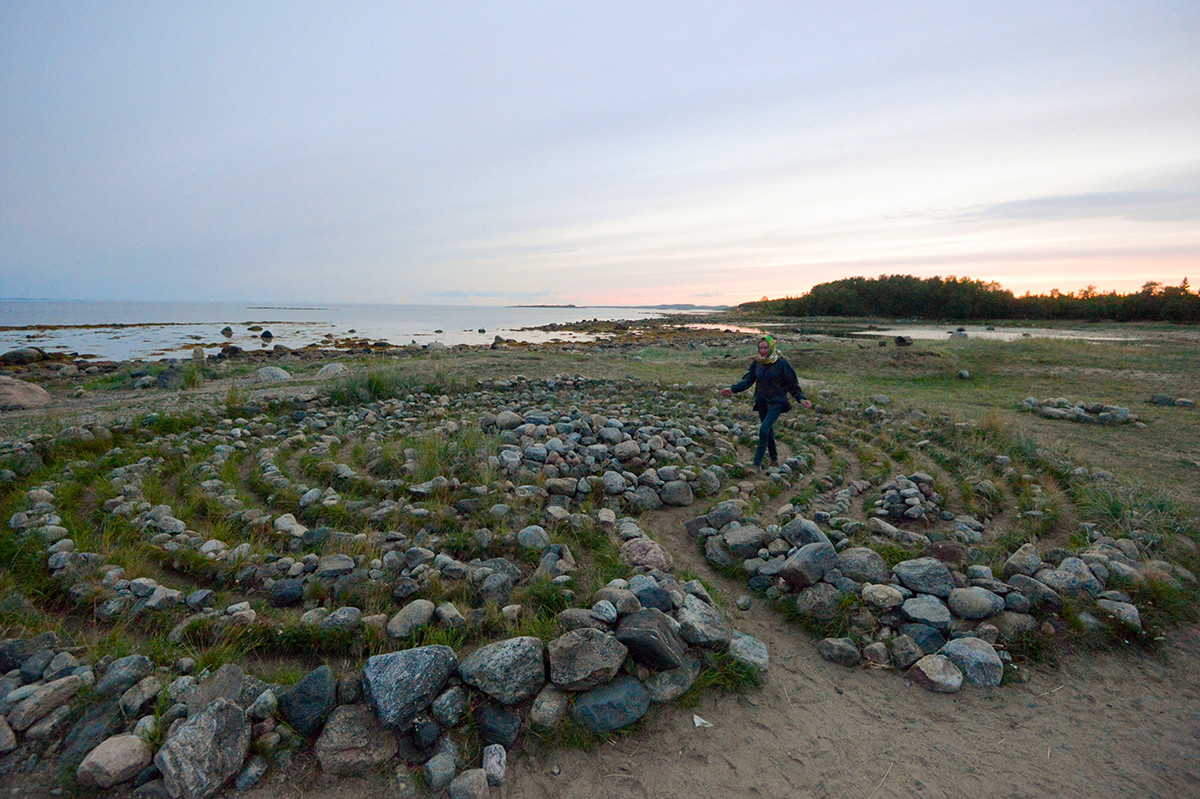 The stone labyrinth in Solovetsky islands

Stone labyrinths are a Northern type of cult objects. They can be mostly found in Sweden (there are around 300 of them there), Finland (ca. 150), Norway (20) and in Russia (roughly 50) – on the Kola Peninsula and on various islands in the White Sea. But the most Russian labyrinths can be found in one place: on the Bolshoy Zayatsky Island, one of the Solovetsky Islands in Arkhangelsk Oblast, Russia.

These labyrinths are estimated to be up to 2500-3000 years old. They were used for some cult purposes and were made using local boulders. Each of them has only one entrance, which also serves as an exit. There are 35 labyrinths in total on the Solovetsky islands. 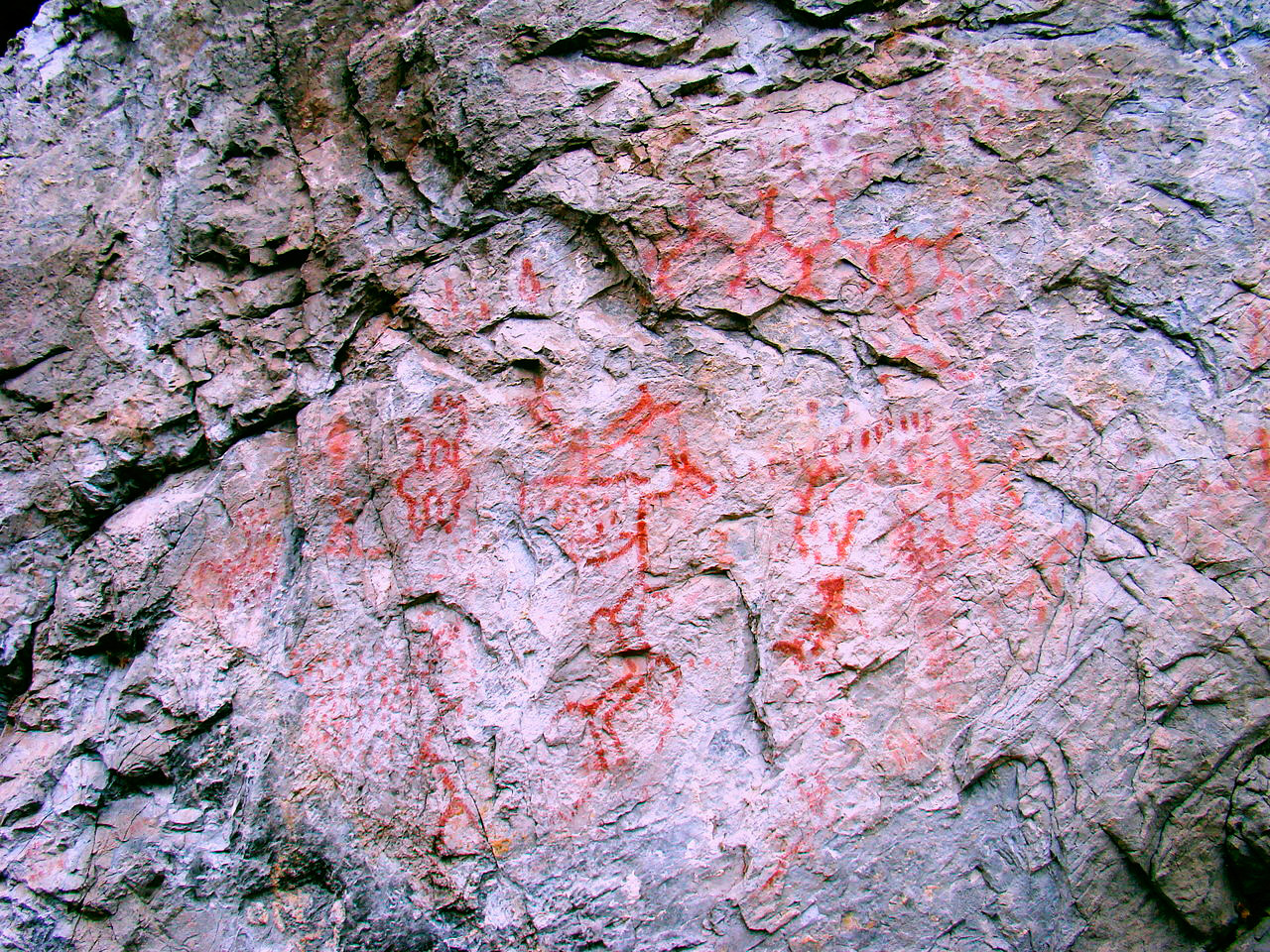 The prehistoric art of the Urals

Along the banks of the Tagil River, Neyva River and Rezh River in the Ural mountain region, Russia, is an area where numerous prehistoric pictograms have been found. Ducks, geese, swans, deer, moose, anthropomorphic figures, geometrical shapes – the “gallery” is enormous, spanning over 90 locations. The pictograms were painted with ‘ochre’ (probably mixed with blood) or other natural paints. The first pictograms in this area were discovered in the late 17th century and copied in 1705. It has proven very hard to determine the age of the pictograms, but experts say they’re probably neolithic (around 10,000 BC). 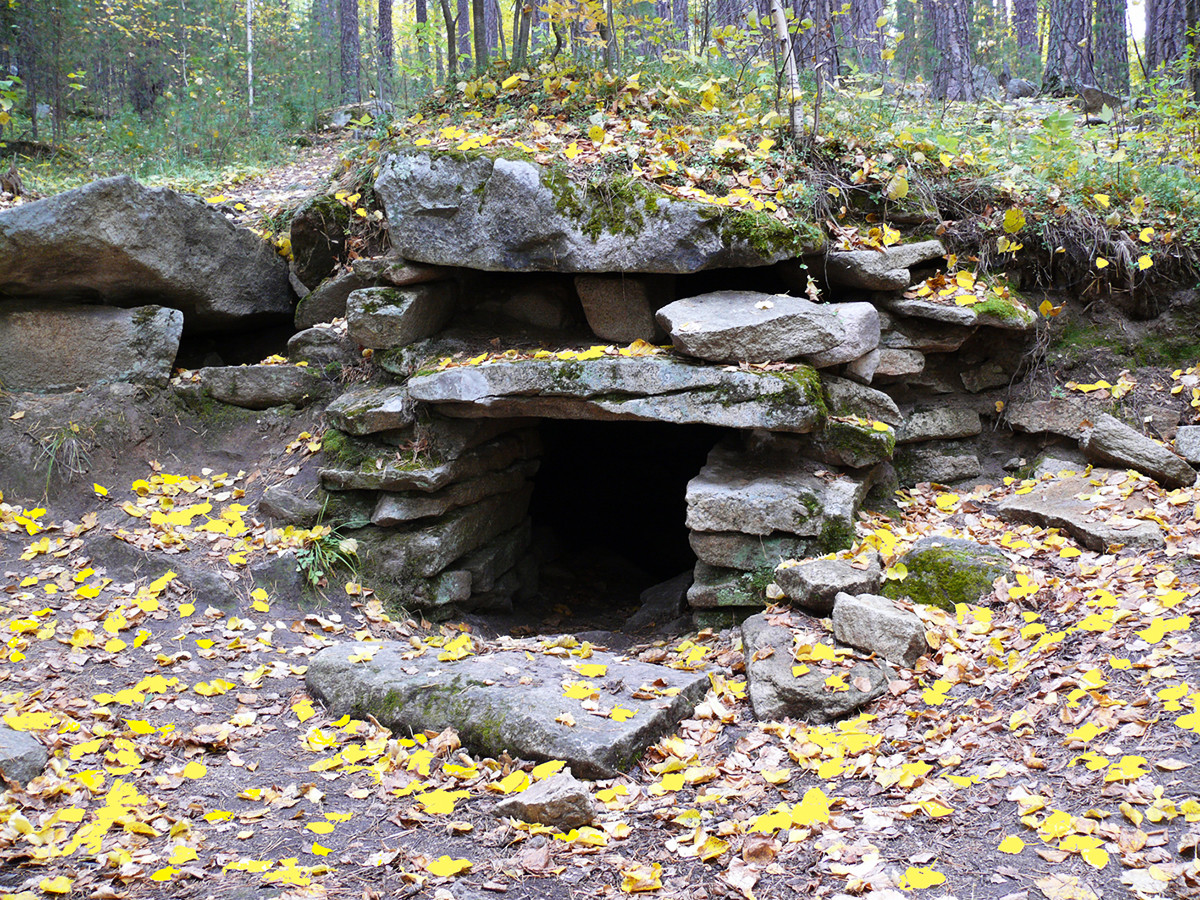 The entrance to the main megalithic shrine complex on Vera island

In the 2000s, a separate dolmen culture was discovered in the Urals – more than 200 dolmens, smaller than the ones in the Caucasus, created around the 4th millennium BC. The most significant complex is the one located on a small (just 450 m at the longest) Vera Island on Lake Turgoyak, Chelyabinsk Region

The complex is estimated to date back to the 4th-3rd millennium BC. Its largest structure is a 19x6 meter stone drywall construction cut into the bedrock and covered with megalithic capstones. The structure, apparently a temple of some sort, is oriented by the cardinal directions, it has windows and sculptures of animal heads. There are more than 40 monuments on the island, including cult sites and a prehistoric quarry used to cut stones for the complex. 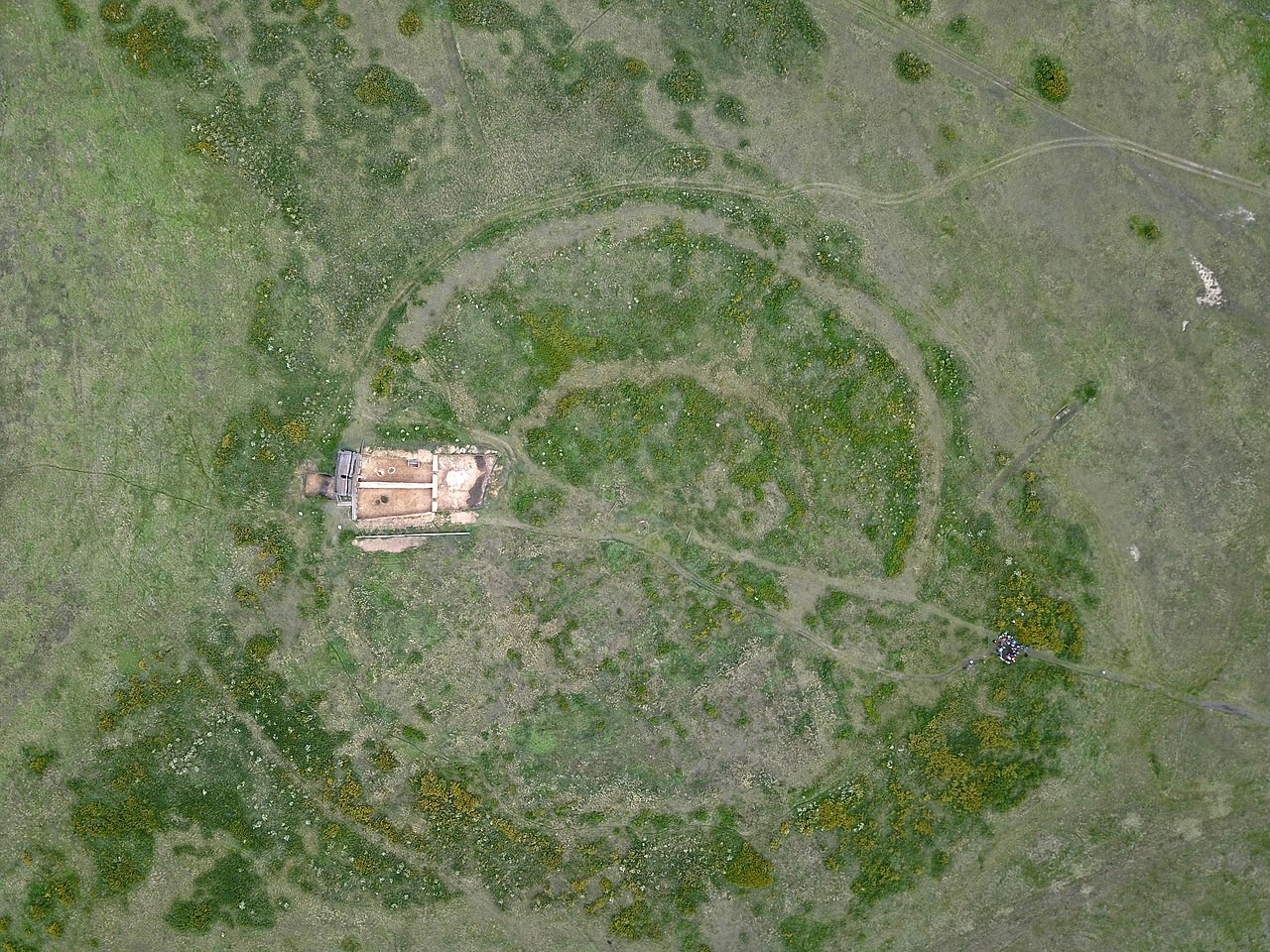 The Arkaim site as seen from above

In the 1970s, the remains of numerous ancient towns were discovered in the Southern Urals, on a territory of roughly 350 square kilometers. They were called ‘Country of Towns’ and belonged to the Sintashta archaeological culture. All the towns were built in the same epoch and have much in common – they all had outer walls, storm drainage systems and shared similar basic architecture. The towns were populated by people of a Caucasian race that were involved in trade and metallurgical production: supposedly, the towns produced bronze. The people of the Sintashta culture also used chariots – the oldest discovered chariot (2026 BC) was found in this region. 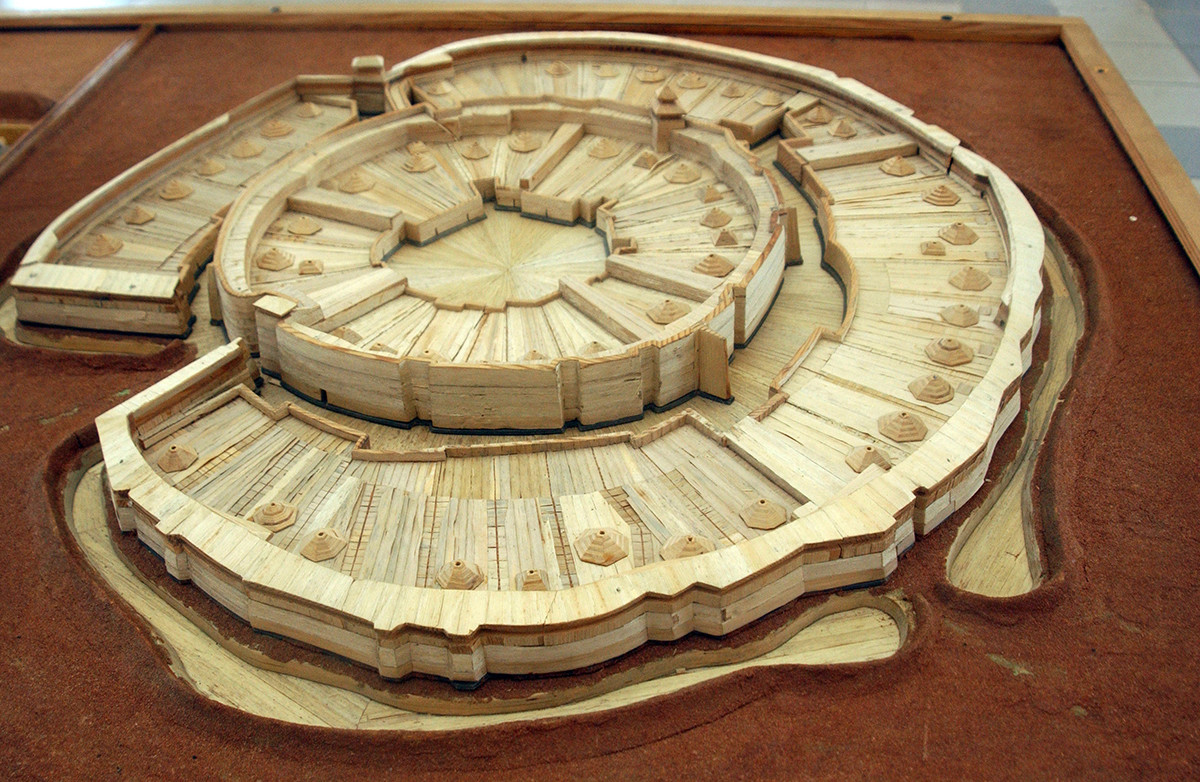 The town of Arkaim, a reconstructed model

Arkaim, discovered only in 1987, is the area’s most prominent site. Its given name is unknown – the site was named by its discoverers. It is a circle-shaped structure about 170 meters in diameter that has a fortified living area, two graveyards, stables and workshops. Arkaim also produced bronze and was able to withstand military attacks. Archeological research on the site continues to this day.