How the first telephones appeared in Russia 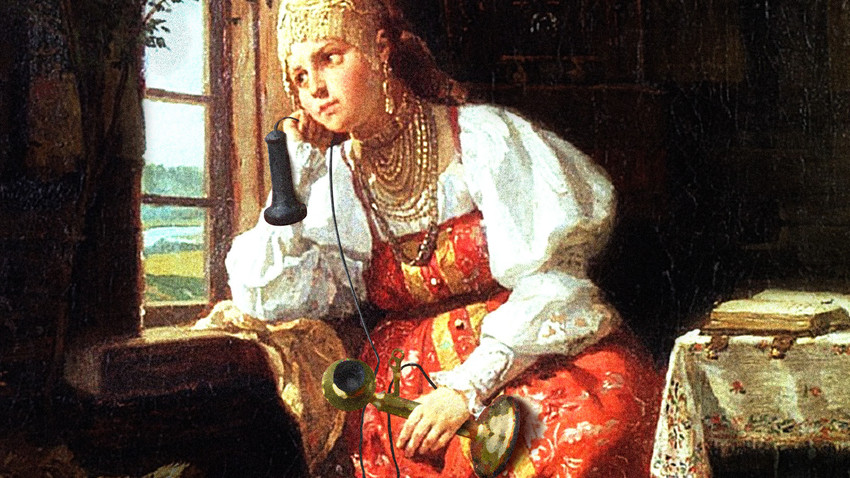 Alexander Kislov
Where was the first long distance call made in Russia? Who feared telephones? And why did only noblewomen operate the first Russian telephone stations?

In 1901, Nikolay Bugrov, a successful Russian merchant of the 19th century, had a telephone installed in his Nizhny Novgorod office. Writer Maxim Gorky recalled Bugrov telling him in awe: “I asked scientists: ‘What does this mean – electricity?’ ‘Power, they say, but its origin is unknown.’ Even scientists! How does a muzhik feel, then? Those phones and everything. I have a worker, he’s an educated guy, but to this day, before picking up the telephone, he crosses himself and after talking, he always washes his hands with soap!”

No wonder technical novelties were treated by the Russian peasants like this. The first telephone call in Russia was performed in 1879 – just three years after Alexander Graham Bell patented his invention. And the first telephone companies appeared in the country in 1882. For comparison, in 1882-1886, only 16,2% of the male population of Russia was literate (with 2,6% of literate females). Deeply religious and superstitious, Russian peasants immediately attributed the telephone to something “from the other side”. But, then again, peasants were the last to get it. The first telephone lines were first used by society’s upper class. 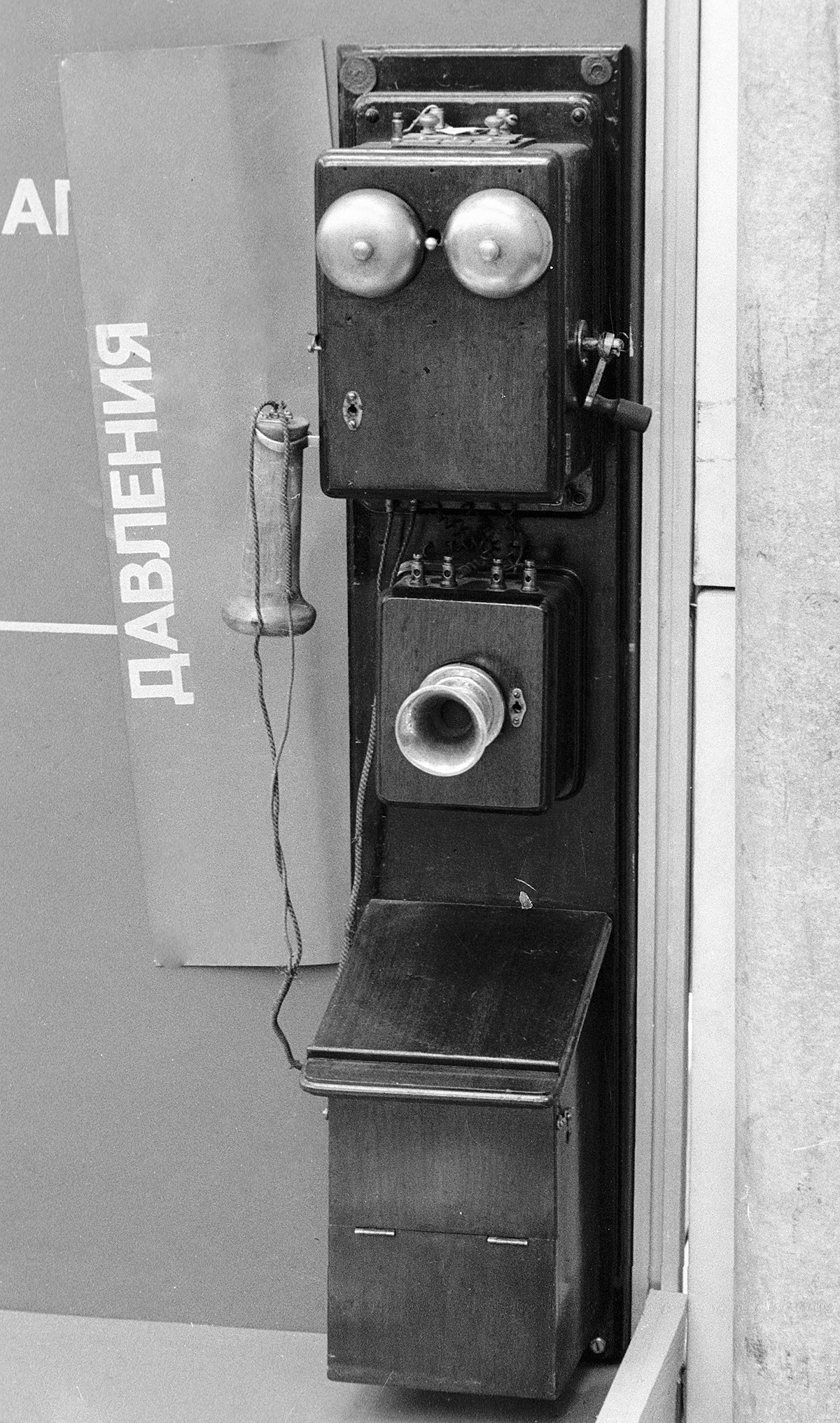 One of the first Alexander Bell's phones installed in Moscow.

The first 26 telephone users in Moscow were filthy rich. The annual fee Bell’s company charged for the installation and maintenance of a telephone was 250 rubles – a huge sum in those days. Back then, 85 rubles would buy you the most expensive fur coat in the posh shops of Kuznetsky Most and for a 100 rubles, one could afford a very comfortable peasant hut. So, the first users in both Russian capitals were businessmen, insurance companies, directorial boards of railroads and so on. By the end of 1882, there were 246 telephone users in St. Petersburg. 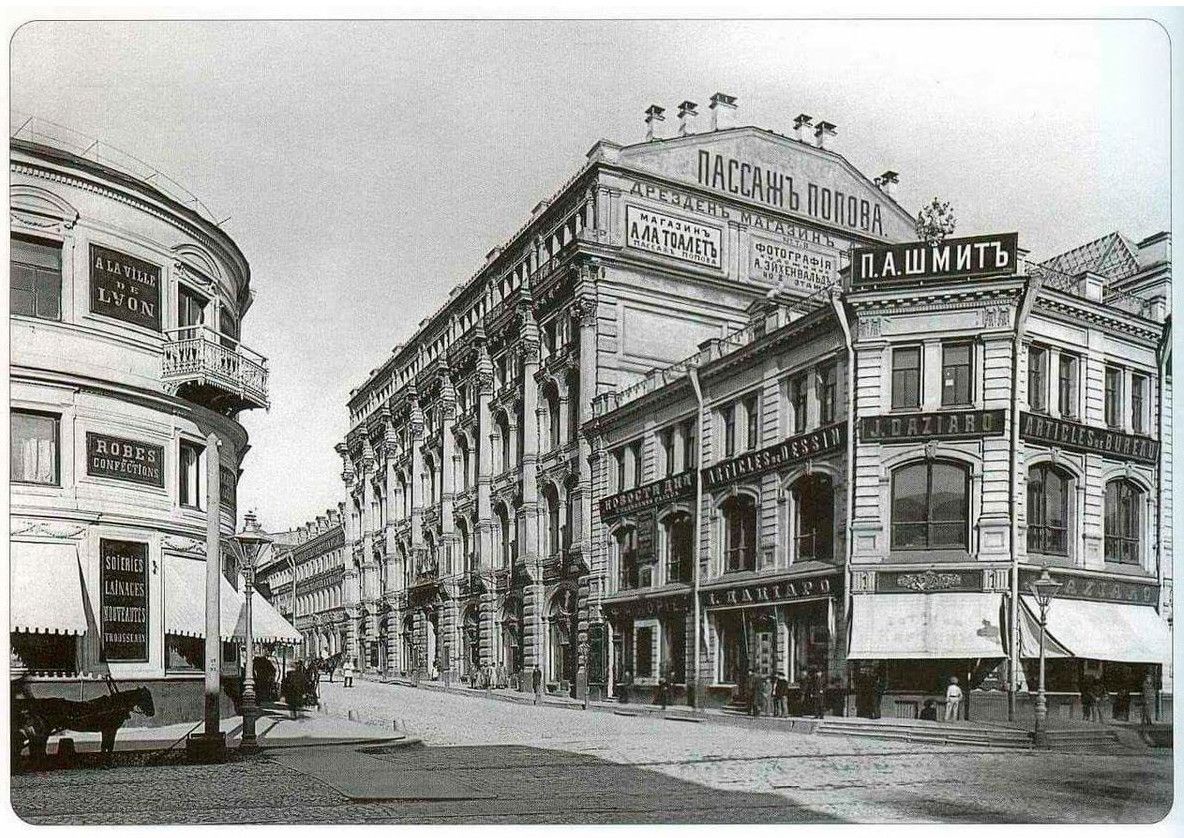 The Popov House on Kuznetsky Most Street, 12

The first call in Russia was, however, placed not by some rich individual or company. It happened much earlier, in 1879, and the test call was made from St. Petersburg to Malaya Vishera railroad station – more than 150 km from the capital. The connection was understandably bad – because of the distance, only whistles of the steamers at the station could be heard, but a human voice was indecipherable and “as if coming from underground”. The second experiment was much more successful – a call from St. Petersburg to Lyuban station 76 km away was heard clear enough: “As if two persons in adjacent rooms, separated by a thin wall and talking in an ordinary voice.”

The first telephone equipment was very heavy – weighing around 8 kg. To speak, one had to lean down to the control panel of the device and to listen – bring the receiver to one’s ear. So if one person spoke, the other person had to be silent. At first, it was very confusing! There was even a “rule” – “Don’t listen with your mouth, don’t speak with your ear!” However, soon, more convenient telephones made by a certain Mr. Ericsson from Sweden appeared in Russia, telephones that had a two ended sender-receiver and more familiar to us nowadays – they began dominating everywhere, except the five main cities Bell’s company controlled. 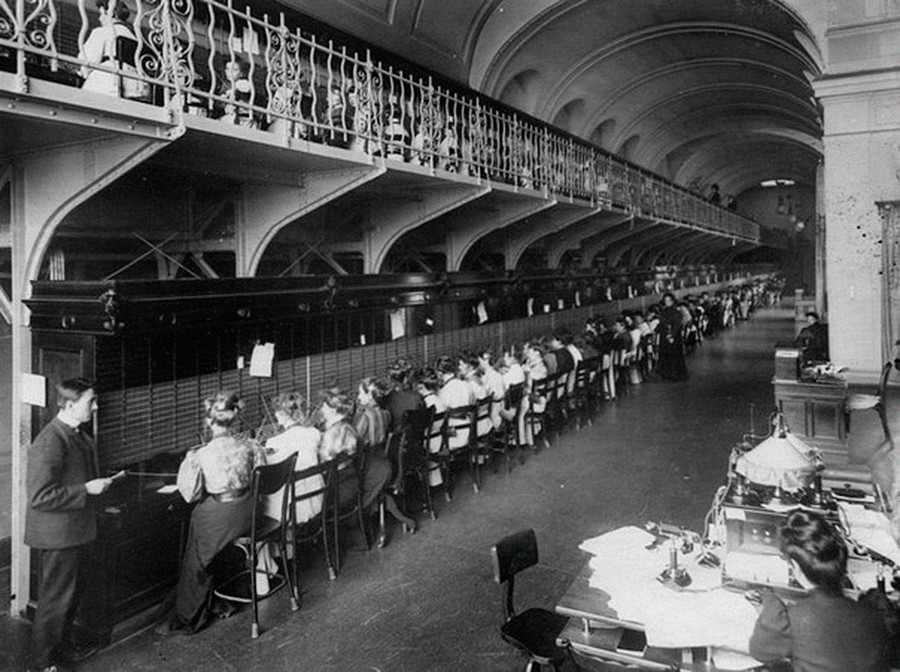 The first telephones had no dials – one just picked up the receiver, spun the magneto (electrical generator) handle to create alternating current – the signal then went to the telephone station, where an operator picked up the call, ready to place it. The first telephone switchboards were operated manually, by ‘telephone ladies’, or baryshnyas, as they were called in Russian, which means an unmarried noblewoman.

The requirements for the telephone lady in late 19th-century Russia were: 18-25 years old, no less than 165 cm (5’4”) tall and a good education. Considering the fact there was no readily available women’s education in Russia at the time, except for the noble class, most of the telephone ladies were young noblewomen from impoverished families, graduates of some Institute of Noble Maidens (there were 4 such institutes in Moscow and 10 in St. Petersburg). They were polite, patient, could speak foreign languages (which was very important, since a large portion of the first telephone users in Russia were foreigners). 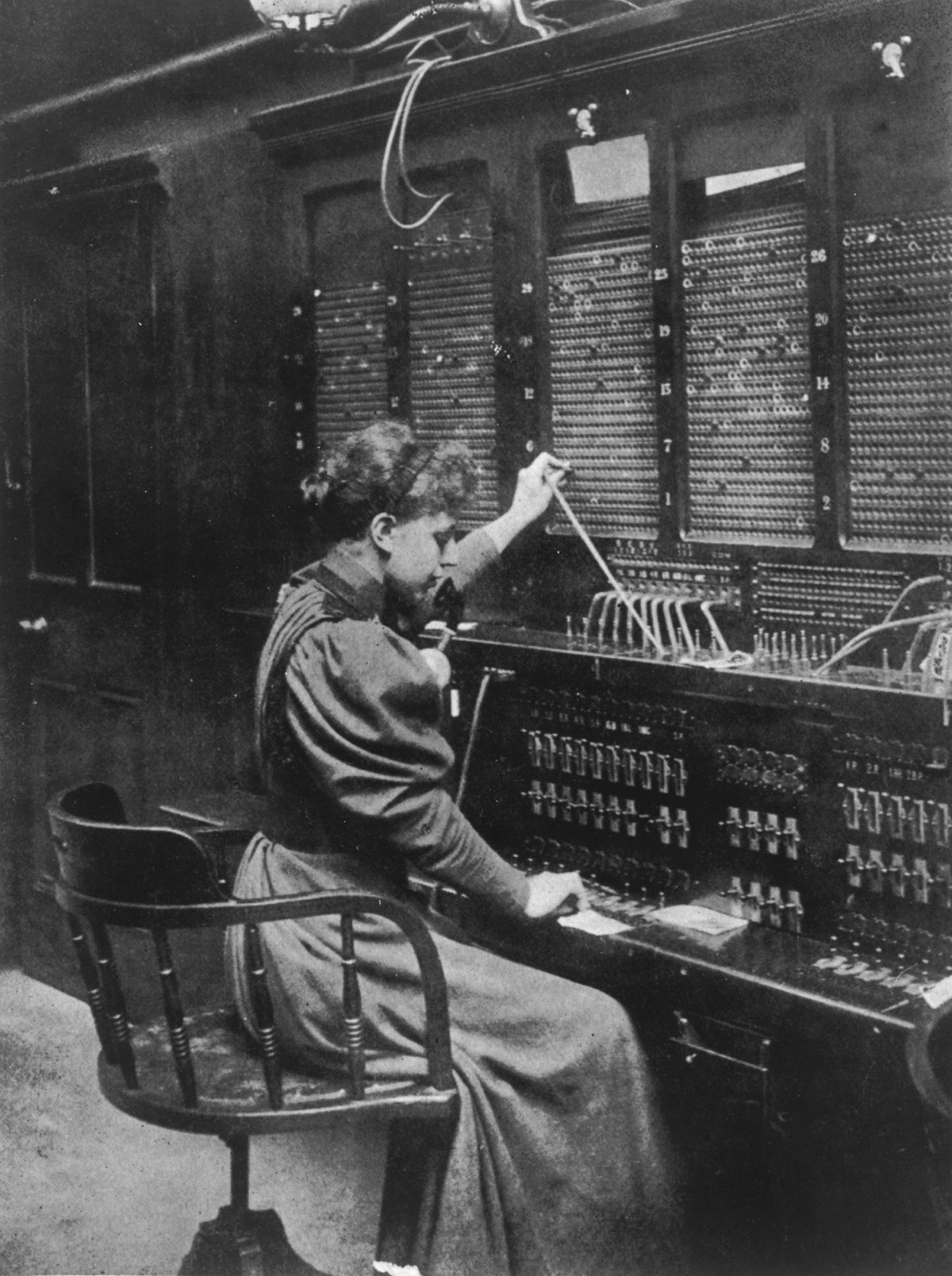 The routine of a telephone operator

The operator would receive the call, ask the user which number they needed and would place the call manually by connecting the sockets on the switchboard in front of her with wires. The job required deep concentration and was nerve wracking – clients often got mad at the operator for a bad connection. However, the job was highly paid – 30-40 rubles a month. But the schedule was unbearable: about 200 calls an hour on average had to be placed, the shifts were 7-8 hour long (including night shifts), with only 1 day off each week and vacation possible only after 2 years! “Nervous attacks often forced the poor women to give up the job after a month and a half even after such a difficult admission to the vacancy,” wrote ‘Electricity’ St. Petersburg magazine in 1891.

Lev Uspensky wrote in his ‘Notes of an old St. Petersburg citizen’: “You could ask a baryshnya to place the call as soon as possible. You could scold her for bad connection. You could have a heart-to-heart conversation with her, even a flirt in the late hours, when there were few connections. It was said that one of them so captivated a millionaire or a Grand Duke with her sweet voice that she ended up ‘providing for herself for life’.” 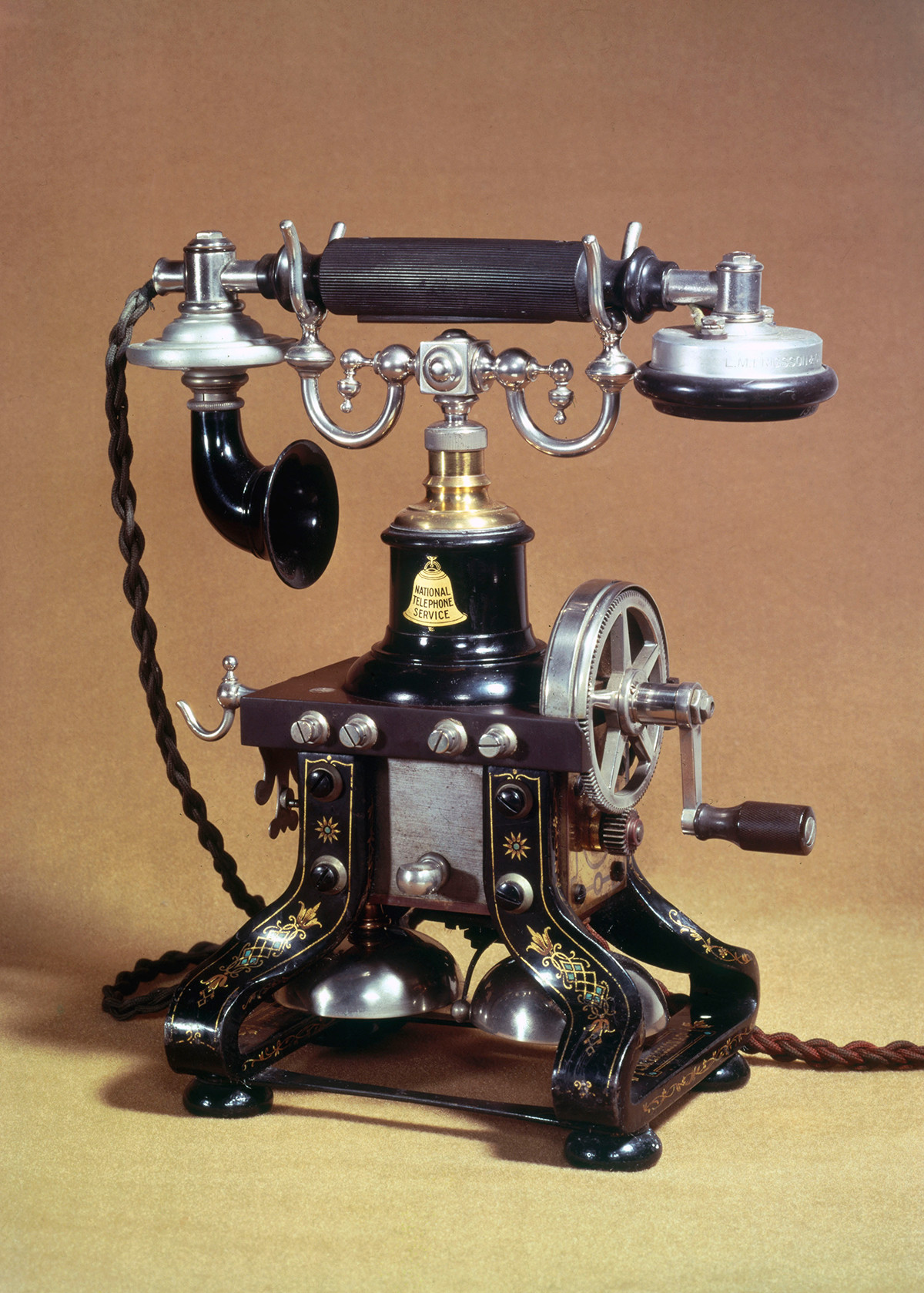 In 1900, Bell’s concession was coming to an end. His company had connected 3,800 clients in St. Petersburg and 2,900 in Moscow, but, in 1900, the rights were bought by Lars Ericsson. He charged only 63 rubles for the installation of a telephone and quickly took over the market with his convenient, lightweight telephones. By 1910, there were already 155 thousand subscribers in the country and new long-distance telephone lines were constantly being built.

Ericsson’s bright idea that brought him wealth in Russia was to produce small portable switchboards. At the time, many local authorities in Russia wanted to install telephone stations to connect villages with region centers, so Ericsson began producing smaller, cheaper switchboards to serve that need. Schools, hospitals, medical reception rooms, veterinary offices, doctors, agronomists, police stations and, of course, the wealthy elite of the regions became the first clients.

Emperor Nicholas II, however, didn’t use the telephone much, despite an apparatus being installed in the Kremlin in 1903 and a telephone being available in the valet’s room in the Emperor’s palace in Tsarskoye Selo. His spouse Alexandra Fyodorovna, in contrast, had three telephones installed – two in her rooms and one in the children’s apartments. 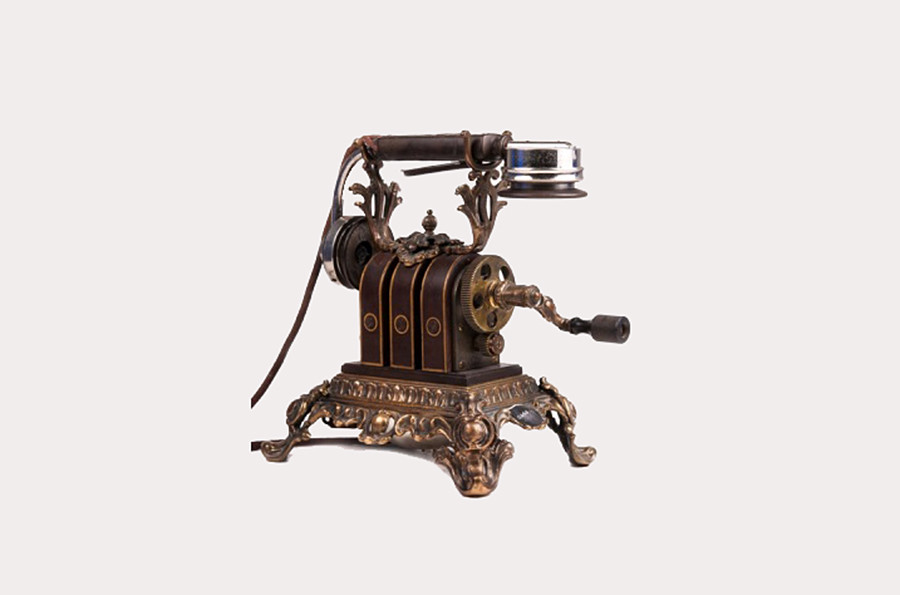 The number of users grew. In 1913, there were already 244,118 telephone clients in Russia. There were 1,212 separate telephone networks and about 44.6 million people connected. By the end of 1916, there were 3.7 telephones per 100 citizens in Moscow – more than in Hamburg, for example. But it was all still manual. 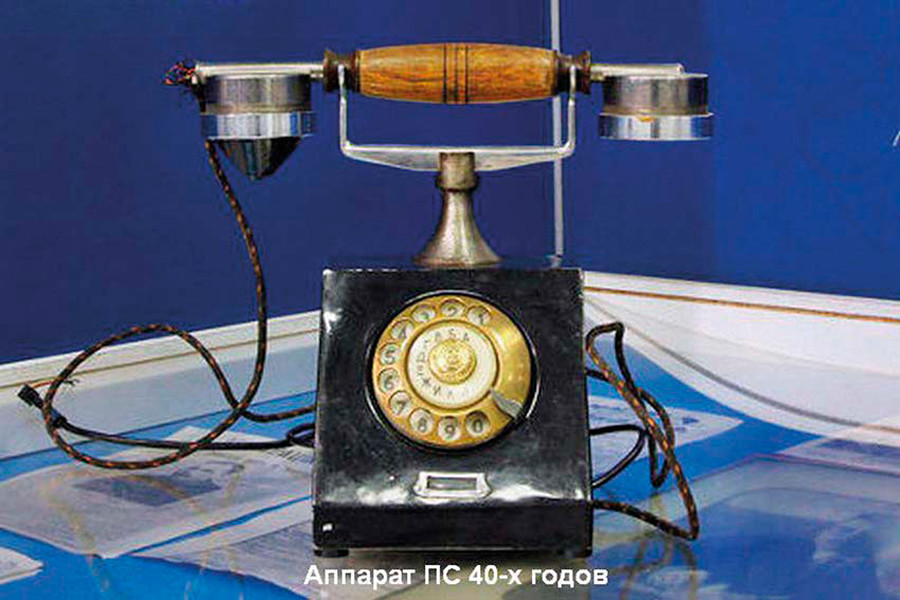 Phones like this were used in the Kremlin in the 1940s

The first automatic telephone station was installed in 1924 – already during the Bolshevik rule – in the Moscow Kremlin. But the first “mass” automatic telephone station was opened not in Moscow, but in Rostov-on-Don, in 1929. And by 1927, the Rostov telephone network had over 3,500 clients and was very hard for the operators to maintain. The new station, opened on August 3, 1929, operated 6,000 numbers – and it was built using the equipment created in Leningrad (former St. Petersburg) under the supervision of Ericsson’s engineers. Even still, Ericsson’s lines and stations were nationalized by the Soviet government in 1917 (Ericsson’s expenses weren’t compensated at all) and the company was nationalized – however now on a commercial basis.