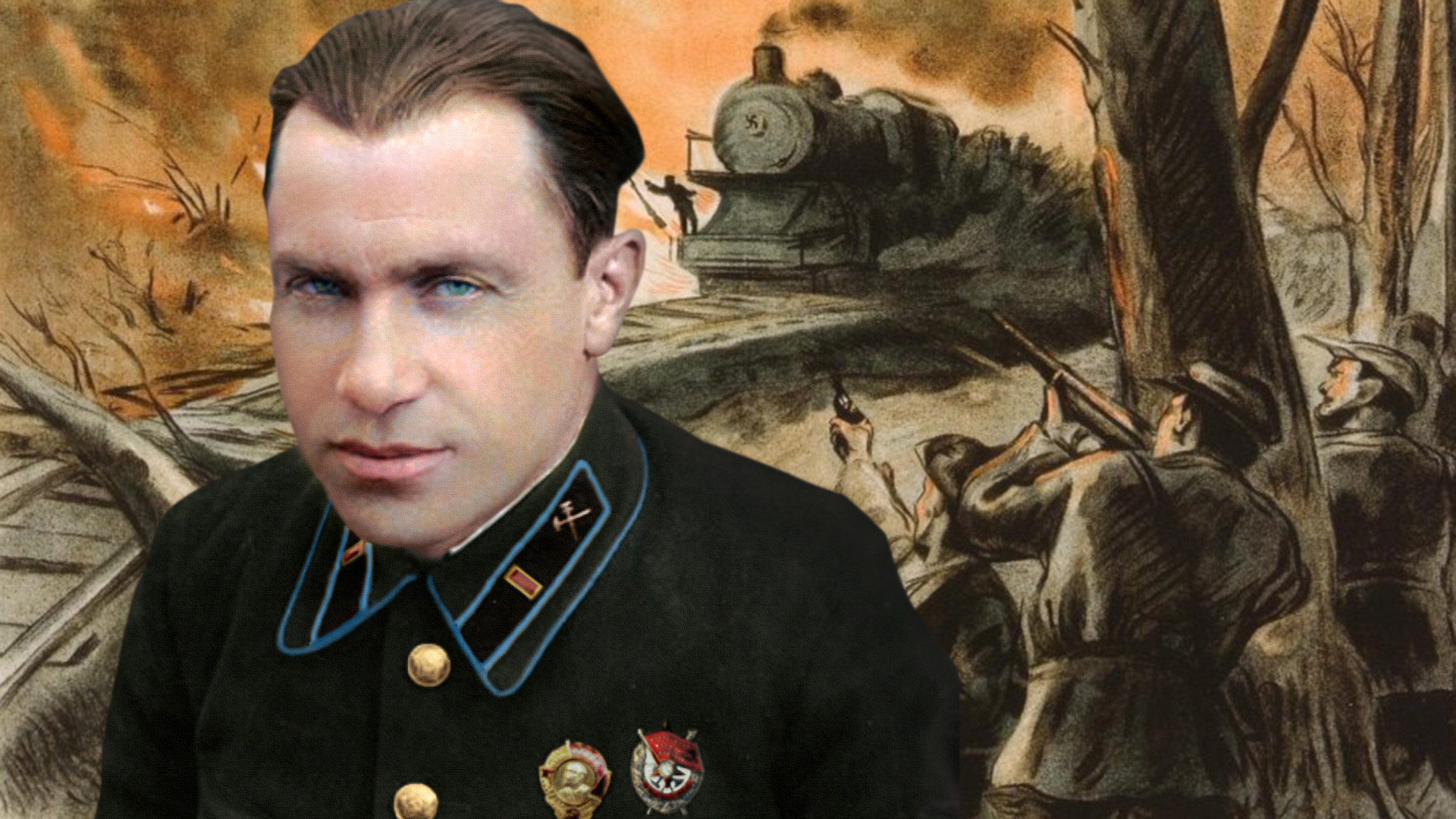 V. Prager, I. Doronin; Public Domain, color by Klimbim
When it came to demolishing enemy buildings or derailing trains, Ilya Starinov had no equal in the Red Army. So much so that Adolf Hitler personally put a bounty on his head.

“The great saboteur”, “the grandfather of the Soviet Spetsnaz”, “the God of diversion”, “the genius of mine warfare” — engineer brigade Colonel Ilya Grigoryevich Starinov was referred to by all those monikers. During World War II, he oversaw a total of 256 bridge demolitions and had more than 12,000 enemy trains derailed.

Starinov took part in field operations, as well as trained saboteur brigades. The man was personally responsible for the design of certain mine barriers and sabotage equipment, which later went into mass production.

Sarinov’s gifts as a saboteur showed themselves during the Civil War in Spain, where, under the assumed name Rodolfo, he was sent as part of a group of Soviet specialists in 1936. 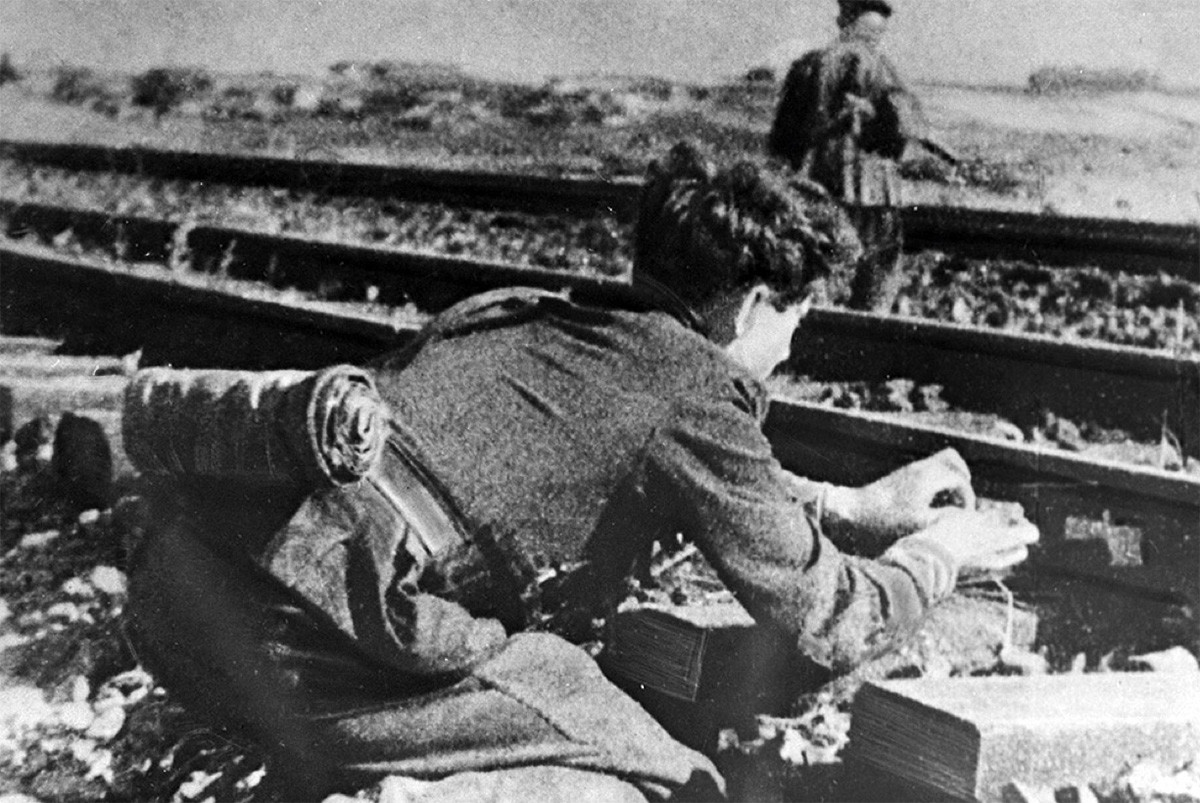 Starinov always approached his work with a high degree of ingenuity: an explosive was once hidden by him in a captured field kitchen, left on a bridge and detonated while an enemy column passed. Another time, it was planted on a mule without an owner, whom General Franco’s soldiers were only too happy to lead back to their camp in the fortified Virgen de la Cabeza. The explosion paved the way for a swift storm by the Republican units, lying in wait nearby.

In order to disable an important enemy tunnel between Pennaroya and Cordoba, a mine was masked as a car tire and laid on the rails. A passing set of carriages inadvertently snatched up the tire and took it right into the tunnel, where an explosion soon took place. The fire and the ammunition the train was carrying burned for several days. 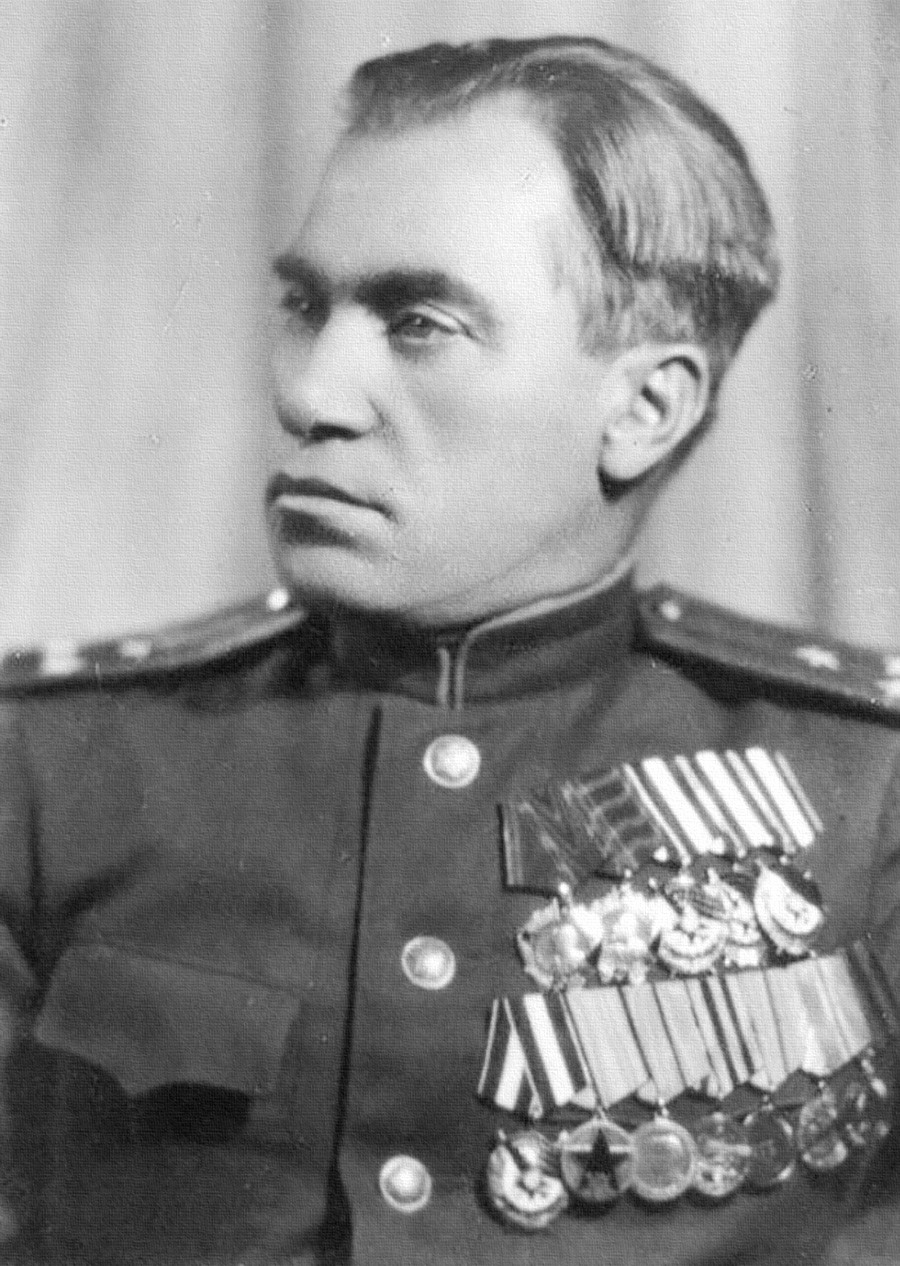 Starinov’s most lauded feat in Spain, however, cost him dearly. While mining railroad tracks on the way to Cordoba, his group mistakenly assumed there would be no passenger trains passing through there. When getting out of the way to a safe distance, the team noticed one such train approaching the site of detonation and, sadly, could do nothing to prevent the tragedy.

“That night was difficult for me. I expected nothing good for the future. I knew there was no room to make excuses… our entire operation - one we had taken such pains to set up - was put in jeopardy,” Ilya Grigoryevich wrote in his ‘Notes of a Saboteur’. Somehow, the tragic events resulted in triumph. It turned out the next morning that the train was, after all, not a passenger one, but one belonging to Italy’s Air Force division’s headquarters. 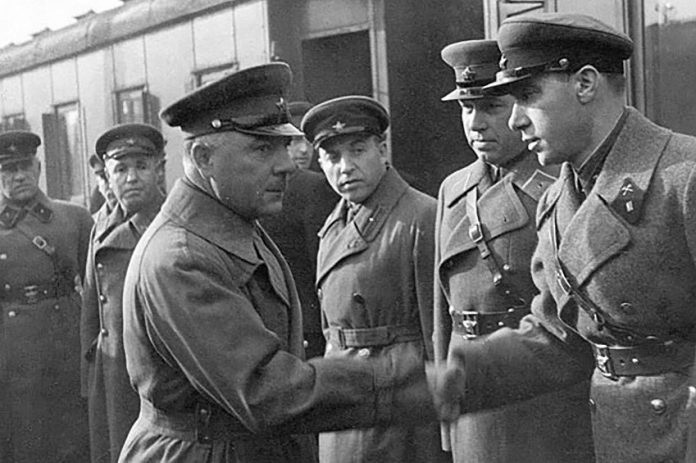 Upon his return home, Starinov almost ended up caught in the wheels of Stalin’s repressions. Many in his midst weren’t so lucky, having stood accused of treason and put before the firing squad. A lot of these men he knew personally. Among them was Yan Berzin, his direct supervisor in Spain. Luckily, Starinov’s life was saved by National Commissar, Marshal Kliment Voroshilov.

When, soon after the Nazi incursion into the USSR, it transpired that the Soviet doctrine of “hit your enemy on his own soil and with minimal losses” would not work, a sharp need arose for the creation of a widespread partisan network, expert at sabotage work behind enemy lines. Starinov’s expertise was just what was needed. 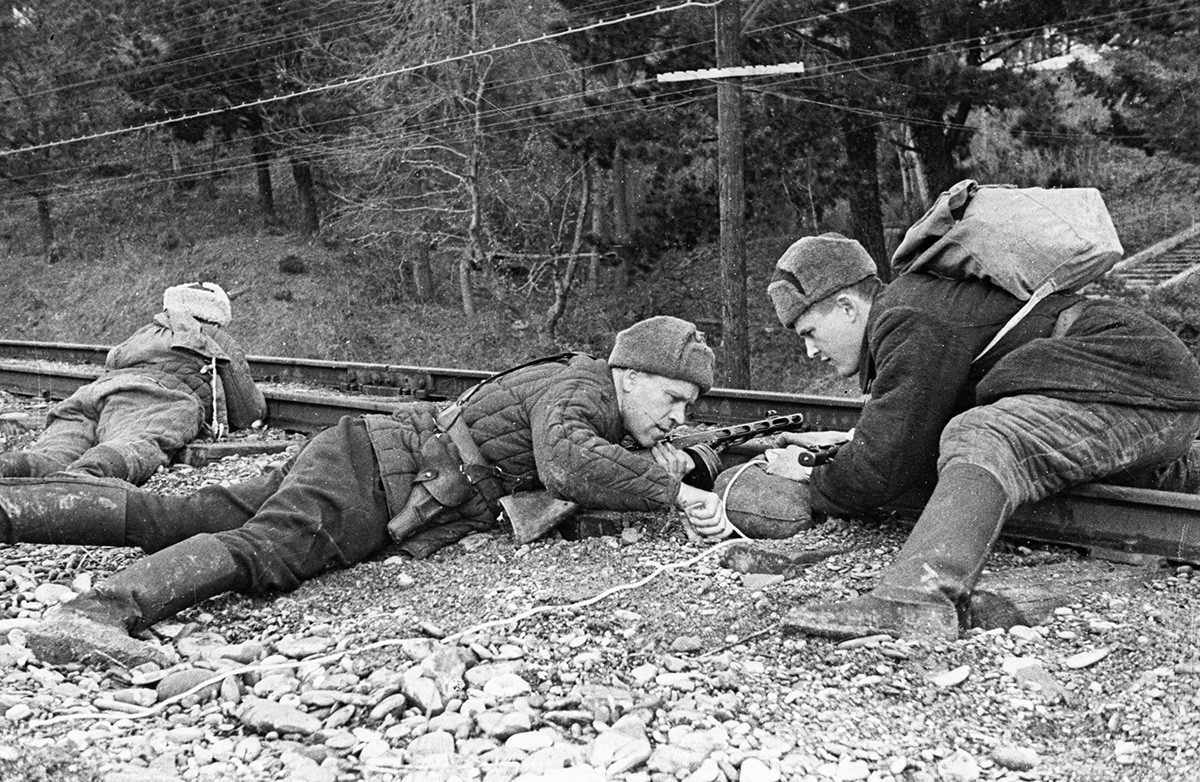 In October 1941, bloody fighting was ongoing in Kharkov — a large industrial hub in Soviet Ukraine. Starinov’s field operative group was tasked with mining the city in case of capture by Germany’s Wehrmacht. As a result, more than 30,000 anti-tank and anti-infantry mines were laid, as well as about 2,000 timed and 5,000 decoy mines — which were intended to stall the enemy, making him spend valuable time and resources.

Furthermore, Starinov had a special trap in store for the Germans. There was a beautiful building in Kharkov’s center, where the saboteur assumed the German command would be staying. A gigantic 350-kilogram radio charge was placed, cleverly concealed under the boiler room floor. Right in the coal heap was another, smaller explosive, not intended for detonation. 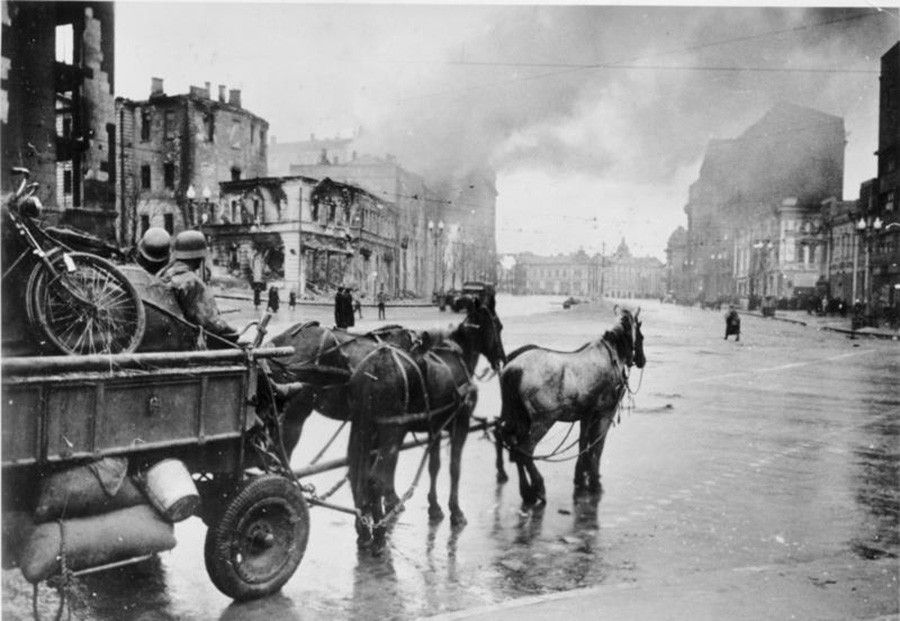 When German bomb disposal noticed and deactivated the decoy, it was believed the building was safe for the arrival of General-Lieutenant Georg von Braun and the command of the 68th infantry division. At 5 am on November 14, the real explosion was detonated by radio, 300 km away from Kharkov. The powerful blast killed von Braun and the officers with him.

Hitler was furious. After the Third Reich’s intelligence learned of Starinov’s identity, a bounty of 200,000 Reichsmarks was placed on his head. 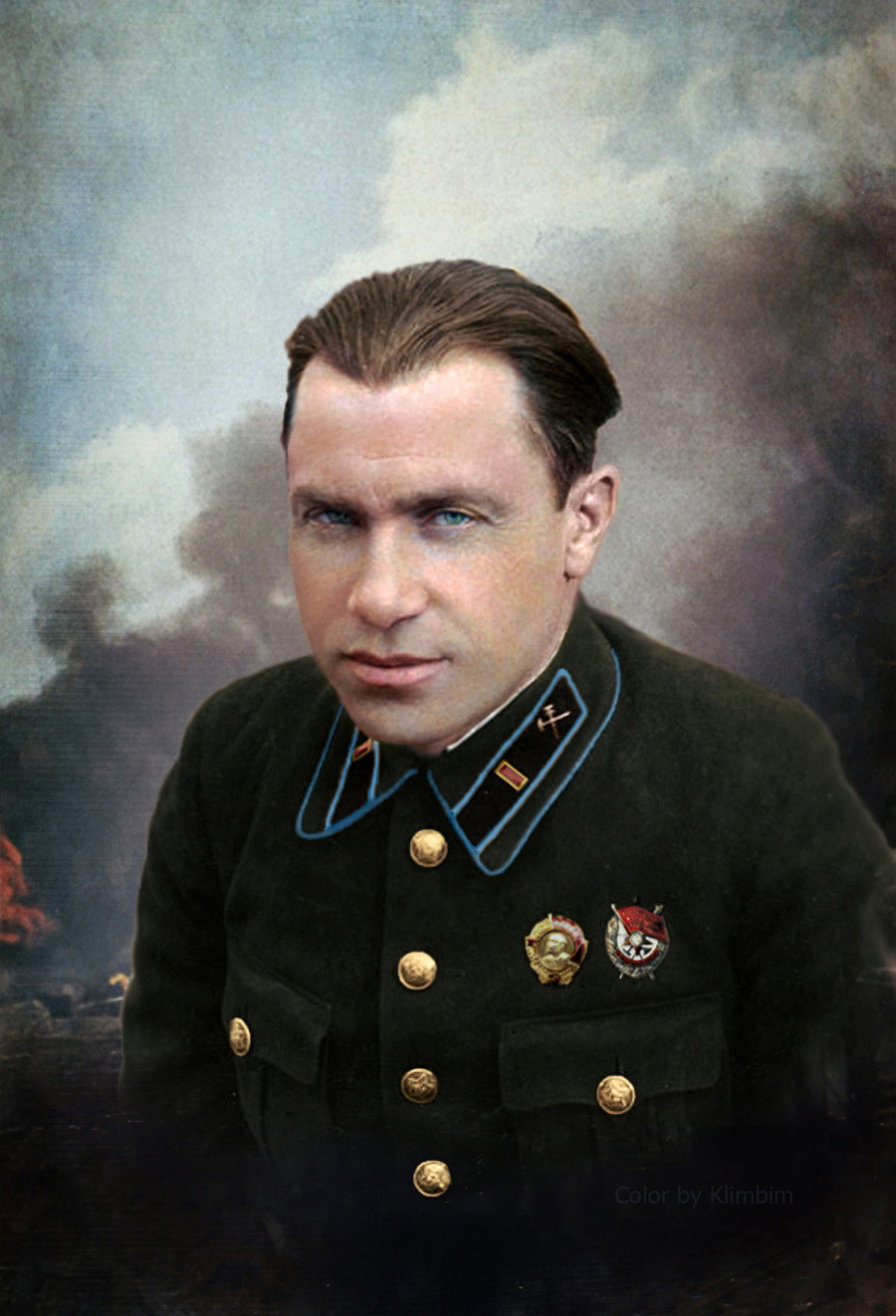 The Germans never managed to capture the Soviet operative. Ilya Grigoryevich continued his work all through the war, organizing partisan sabotage activity behind enemy lines and setting up a liaison network between the Red Army and Yugoslav National Liberation Army forces — while also focusing on demining roads in Hungary and Germany.

Grandfather of the Spetsnaz

In the days after the war, Ilya Starinov focused on teaching at the KGB. He was personally responsible for training dozens of highly-skilled Spetsnaz operatives, who would refer to him as “granddad”. 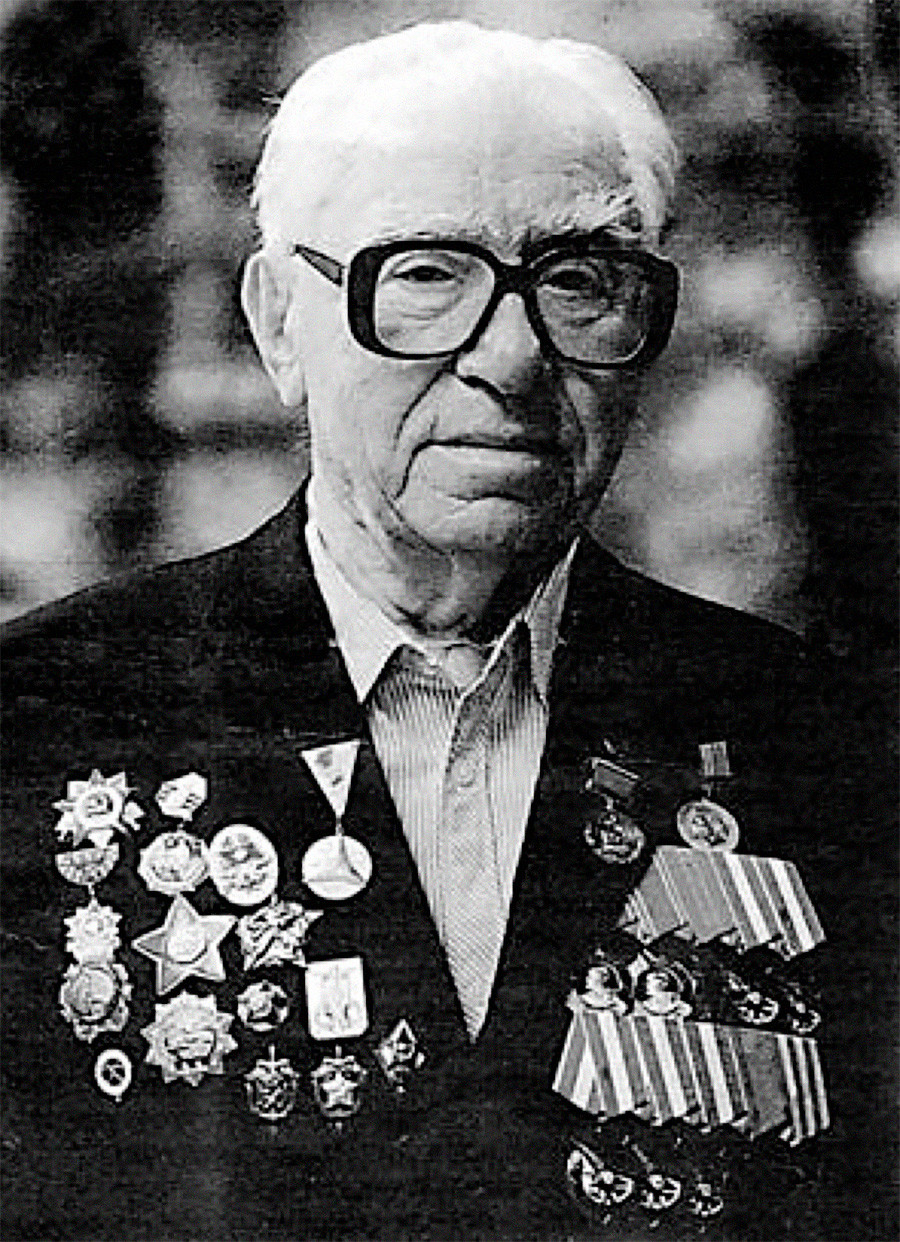 Starinov was also awarded dozens of medals and orders, but somehow never received the country’s highest honor. He was put up for the order of the Hero of the Soviet Union a total of three times during the Soviet period and twice in Russia - but it never materialized. The culprit was Starinov’s difficult and stubborn personality - his penchant for speaking unfiltered truths to his commanders, often right to their faces.

Although he never managed to attain the rank of General, Ilya Grigoryevich didn’t take it to heart. “It’s better to be a living colonel than a dead marshal,” he would say. The legend passed away peacefully in 2000 after living to be 100!