The six-year-old soldier who fought in WWII

History
Boris Egorov
Seryozha Aleshkov was awarded the medal ‘For Combat Merit’, received a Browning as a trophy pistol from an army general and was even “promoted” to the rank of junior lieutenant.

World War II affected the lives of millions of people of all ages. Old men, as well as callow youths, had to take up arms. But only one Red Army regiment on the Eastern Front had a serviceman in its ranks who was just six years old!

Son of the regiment 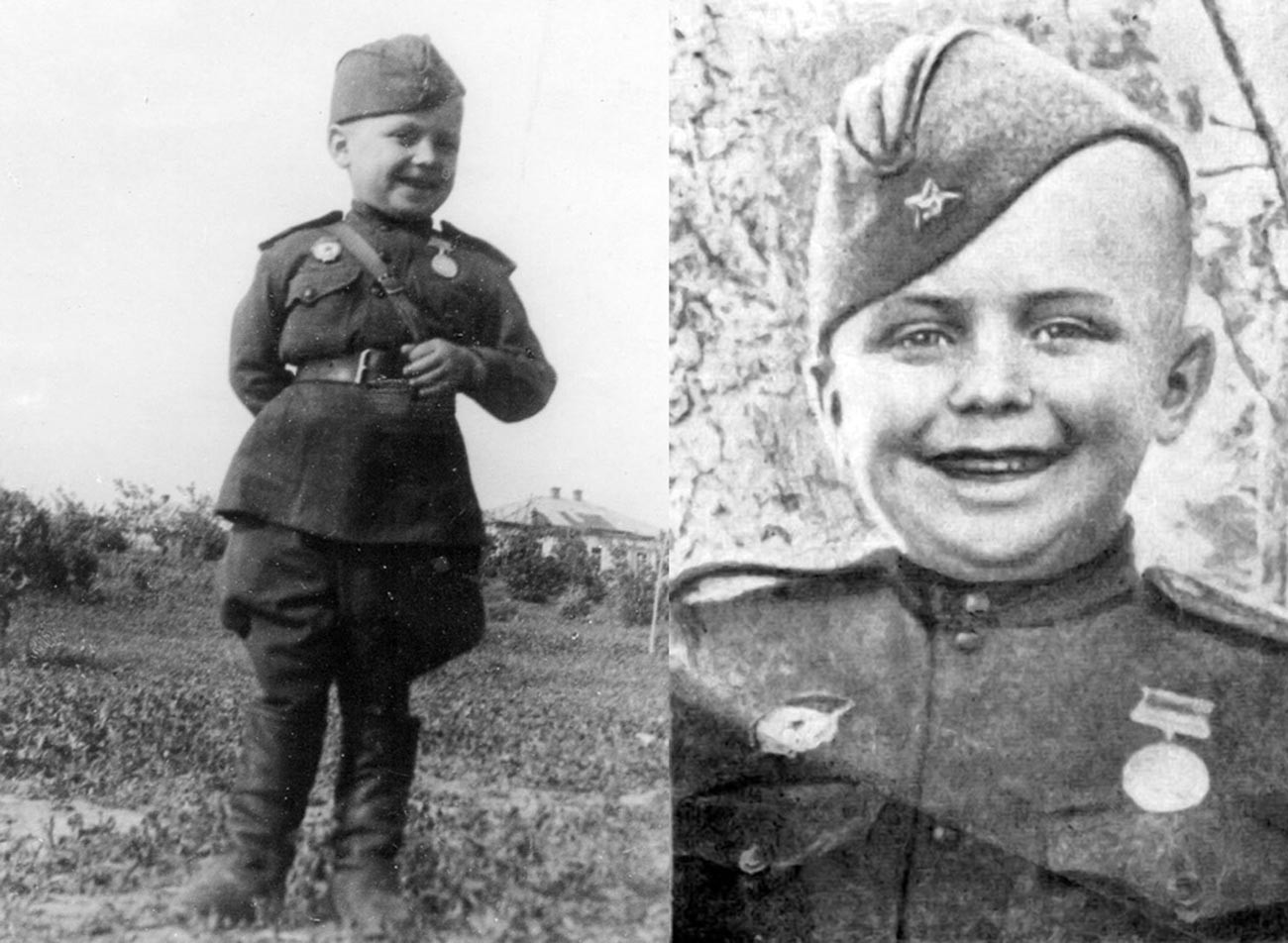 In the summer of 1942, Seryozha [short for Sergei], from the village of Gryn in the Kaluga Region, found himself completely orphaned: His father had died before the war and the Germans executed his mother and brother for their links to the partisans, right before the boy’s eyes. Left all alone, the six-year-old child was aimlessly wandering in the woods in a state of shock when, emaciated and hungry, he was discovered by a reconnaissance group of the 142nd Guards Rifle Regiment.

The rescued boy said his name was Aleshkin, although it emerged later that his real name was Aleshkov. The soldiers decided to keep him in the regiment and he was even officially adopted by the regiment’s commander, Mikhail Vorobyov. 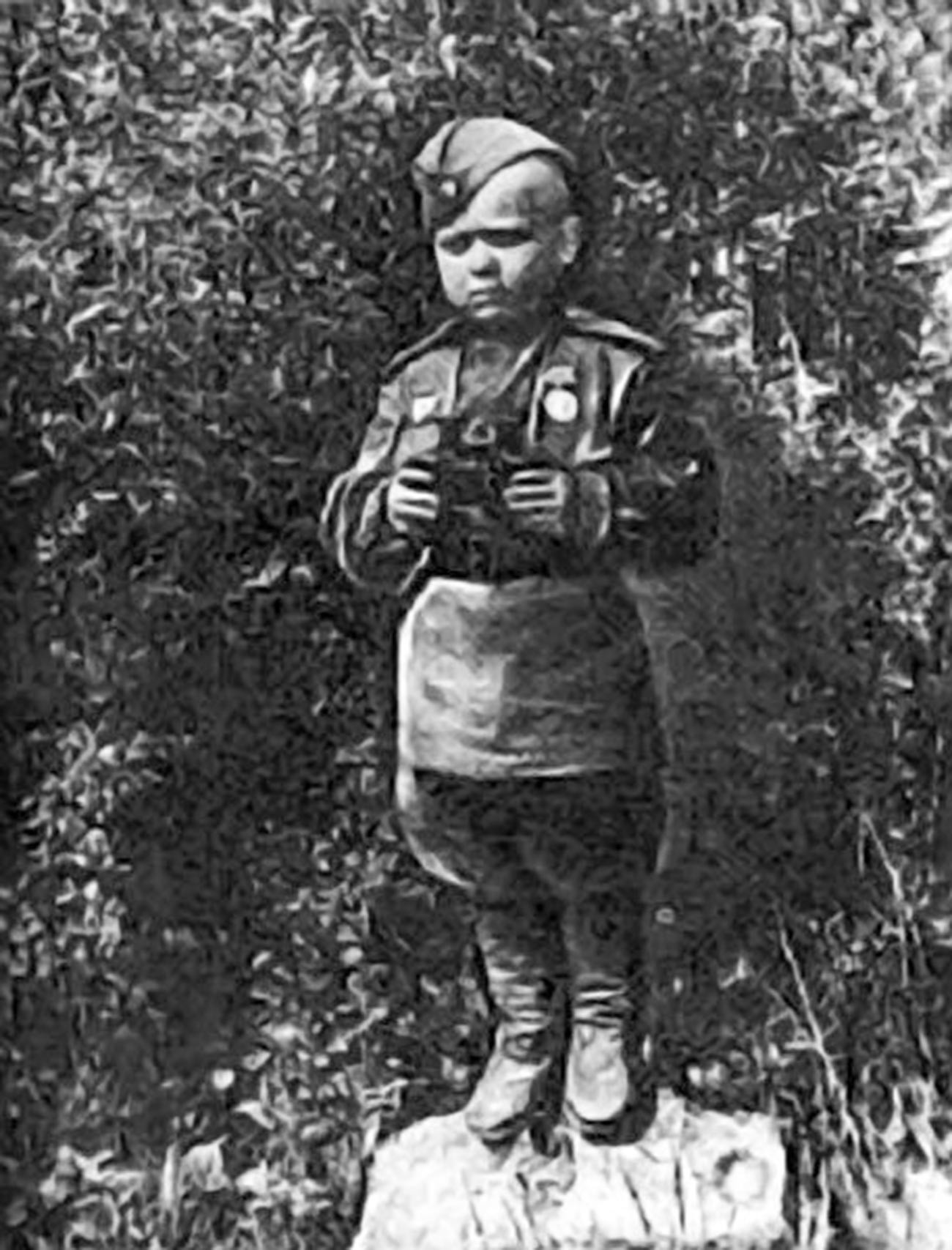 The boy was very eager to be of use. He delivered newspapers and letters to subunits and constantly ran to headquarters to ask for more instructions. One day, while doing his regular rounds, he discovered German fire support spotters hiding in a haystack and they were quickly neutralized by Red Army soldiers.

At the beginning of November 1942, the 142nd Guards Rifle Regiment was transferred to Stalingrad. Here the little soldier performed a heroic action for which he was awarded the For Combat Merit medal. 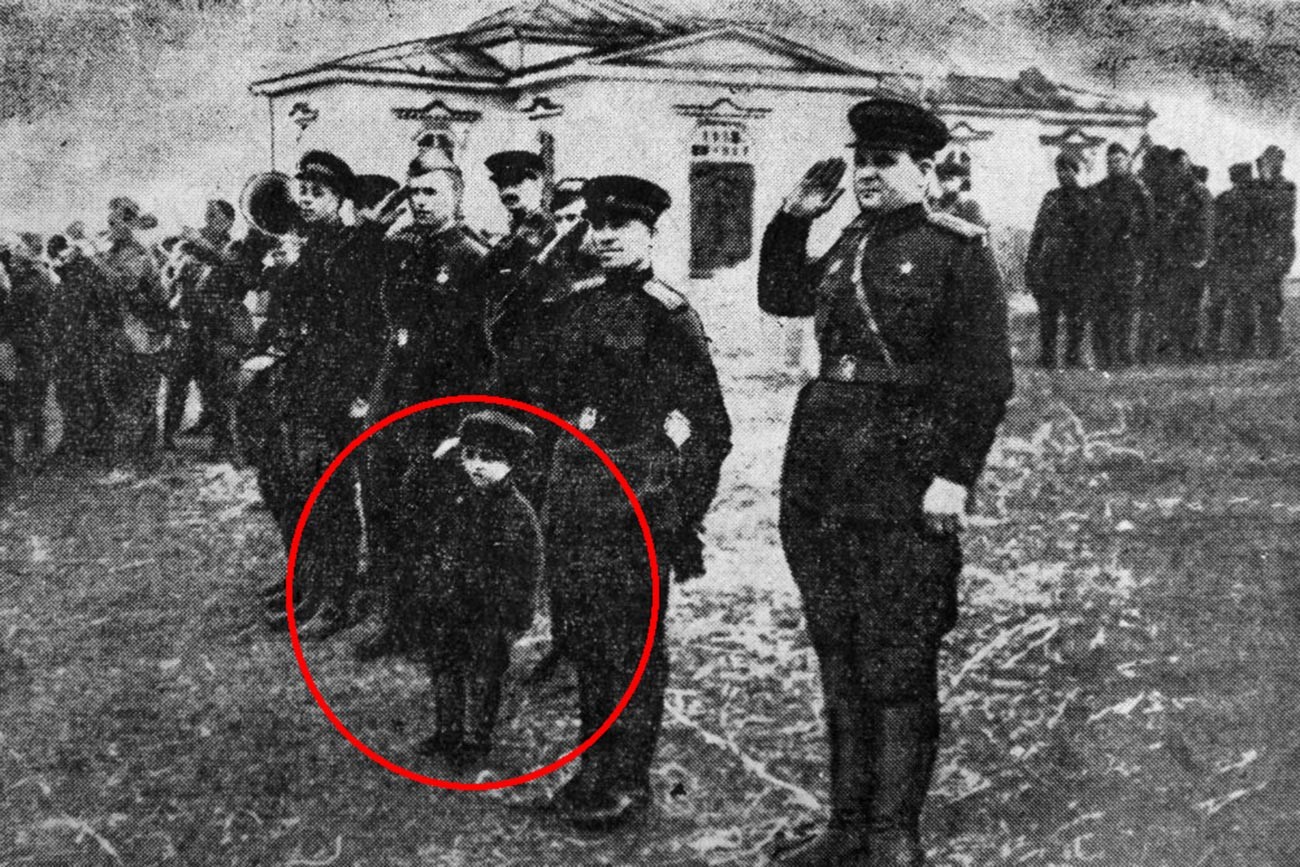 During artillery shelling, Seryozha’s adoptive father was buried under debris in a dugout. The boy tried to dig him out on his own but, when he failed, he ran to find some sappers. Mikhail Vorobyov was saved, albeit shell-shocked and wounded.

“With his cheerfulness and love for his unit and those around him, he boosted morale and confidence in victory at extremely difficult moments. Comrade Aleshkin is the favorite of the regiment,” said the order conferring the award on Sergei, who had just turned seven. 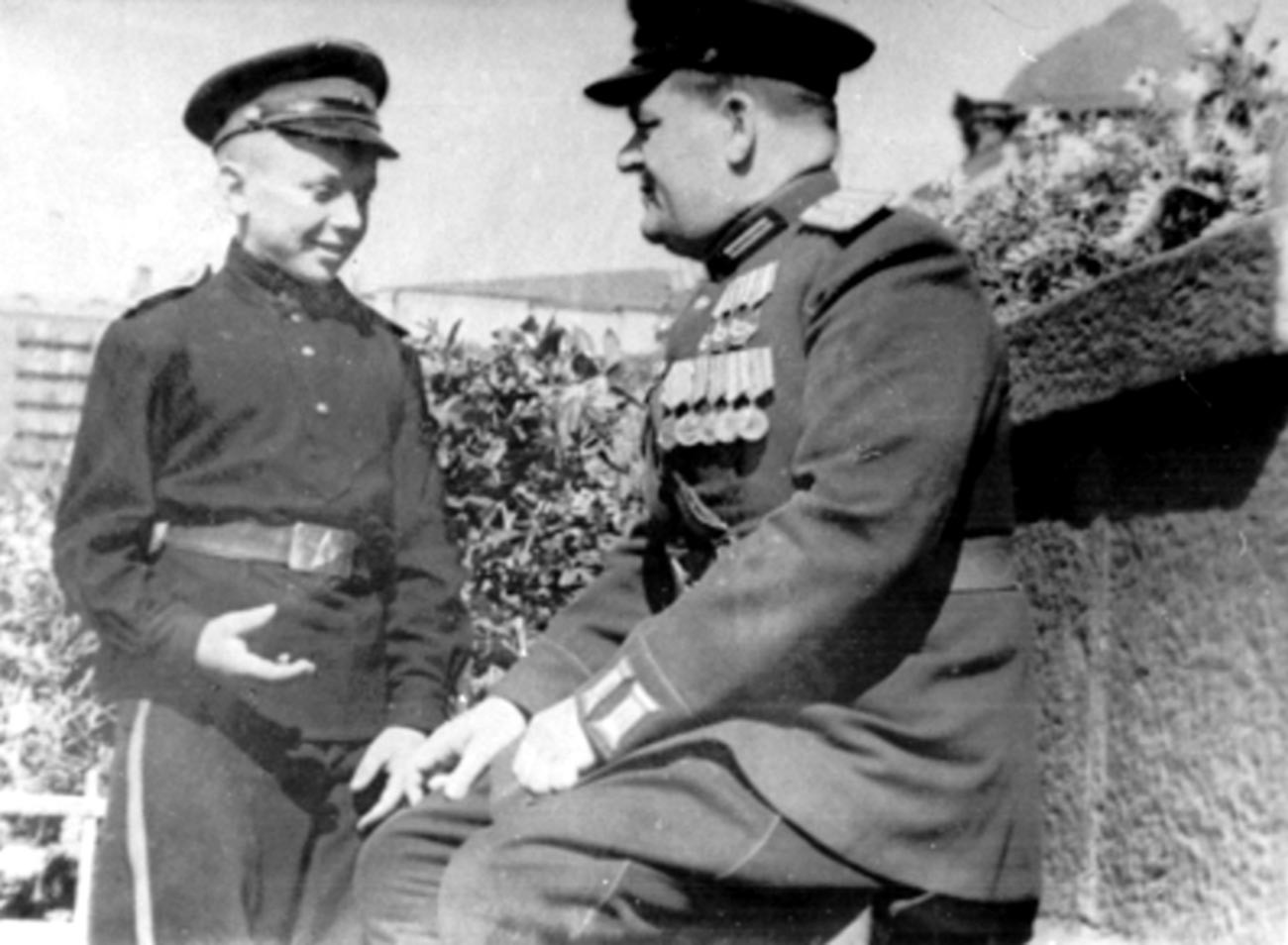 Aleshkov’s combat path was hard. He almost drowned crossing the Severny Donets River and, on another occasion, the vehicle he was travelling in hit a mine. The child miraculously survived.

Once, as a joke, the soldiers gave Seryozha a junior lieutenant’s uniform and it almost cost the boy his life. The shiny shoulder straps attracted the attention of German pilots, who discharged a burst of machine gun fire at the “officer”. One bullet hit Aleshkov in the heel. “My father later reproached himself a lot for it,” said Vyacheslav Vorobyov, Sergei’s stepbrother. 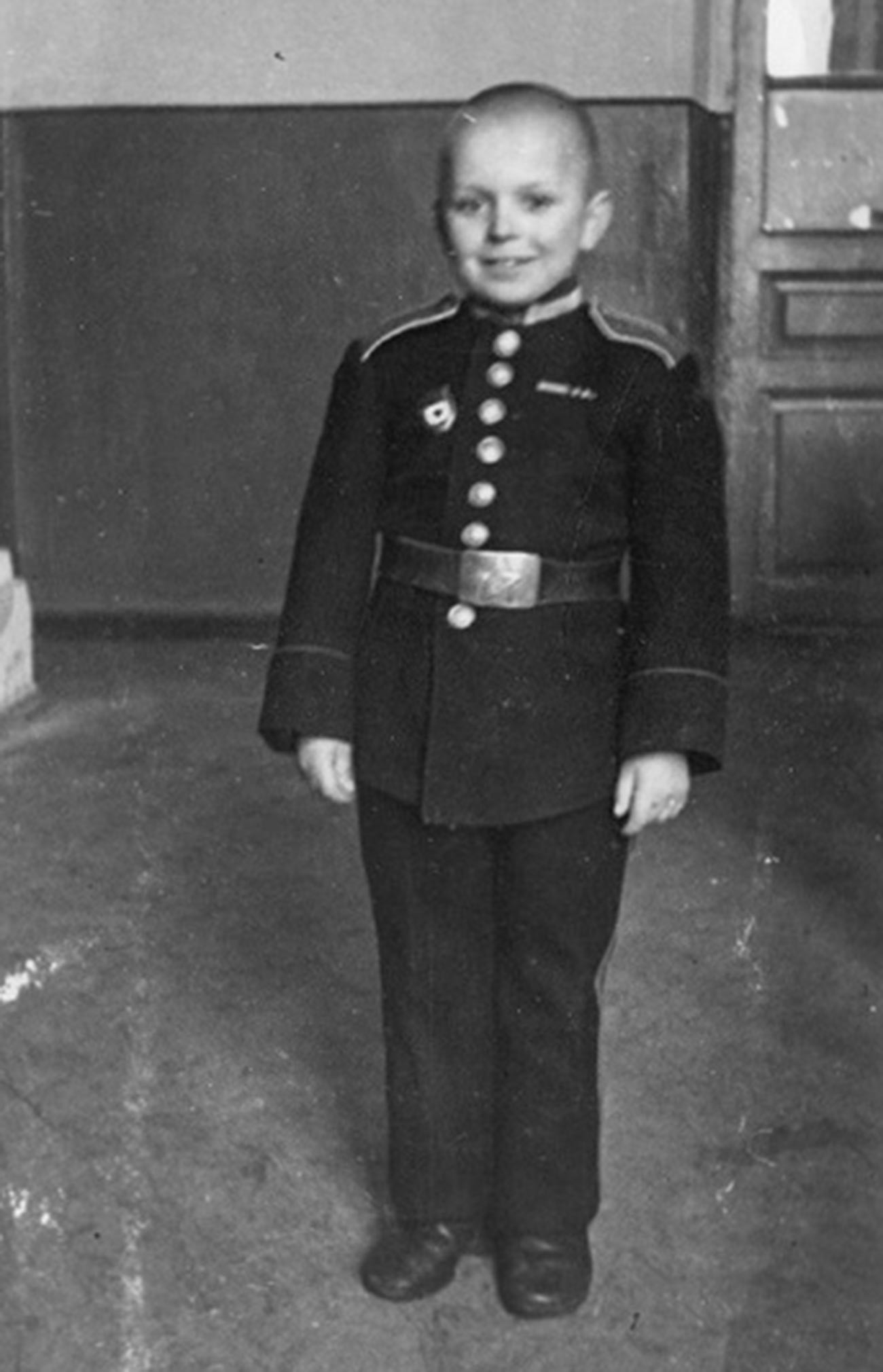 But Sergei did not succeed in his military career - he was let down by his health (he was addicted to smoking from an early age). Having received a law degree, Aleshkov lived in the Urals for the rest of his life and died of a heart attack in 1990, at the age of only 54.