What were Russian military rations like under the tsar? 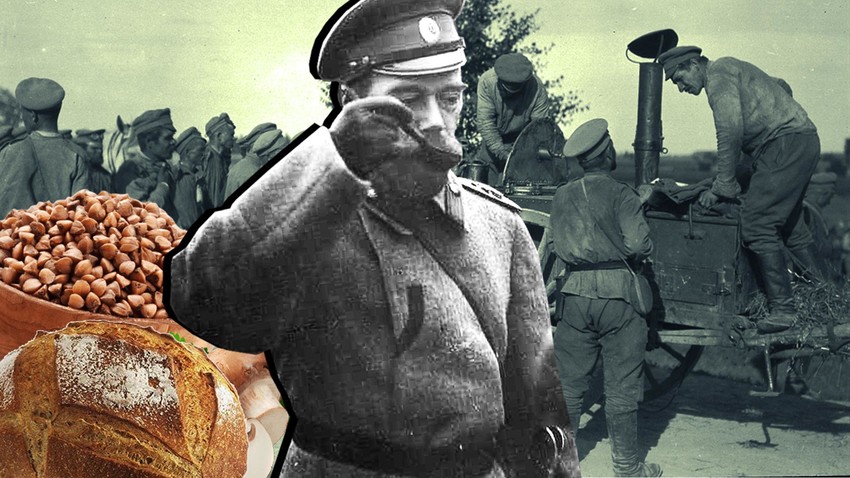 Public domain; George Muse/russiainphoto.ru
What was on the menu of a Russian soldier of the 18th-19th centuries and how did nutrition affect the performance of the Russian army?

“Living in Paris is bad, brother – nothing to eat, it’s no use even asking for a piece of rye bread!” That’s what Peter Sheremetev told Alexander Pushkin after returning from Paris where he had been on diplomatic service in 1827. What’s so special about rye bread? Rich in vitamins and baked on sourdough, rye bread was a staple for any Russian – including the Russian soldiers.

Without rye bread, the Russian army couldn’t operate well. During the Russo-Turkish War of 1735-1739, the Russian supply trains failed to get to Crimea in time and the army was left to provide for itself on the spot. Christoph von Manstein, a Prussian military man, wrote that “What weakened the soldiers the most was the fact that they were used to eating sour rye bread and here, they had to eat unleavened wheat bread”. 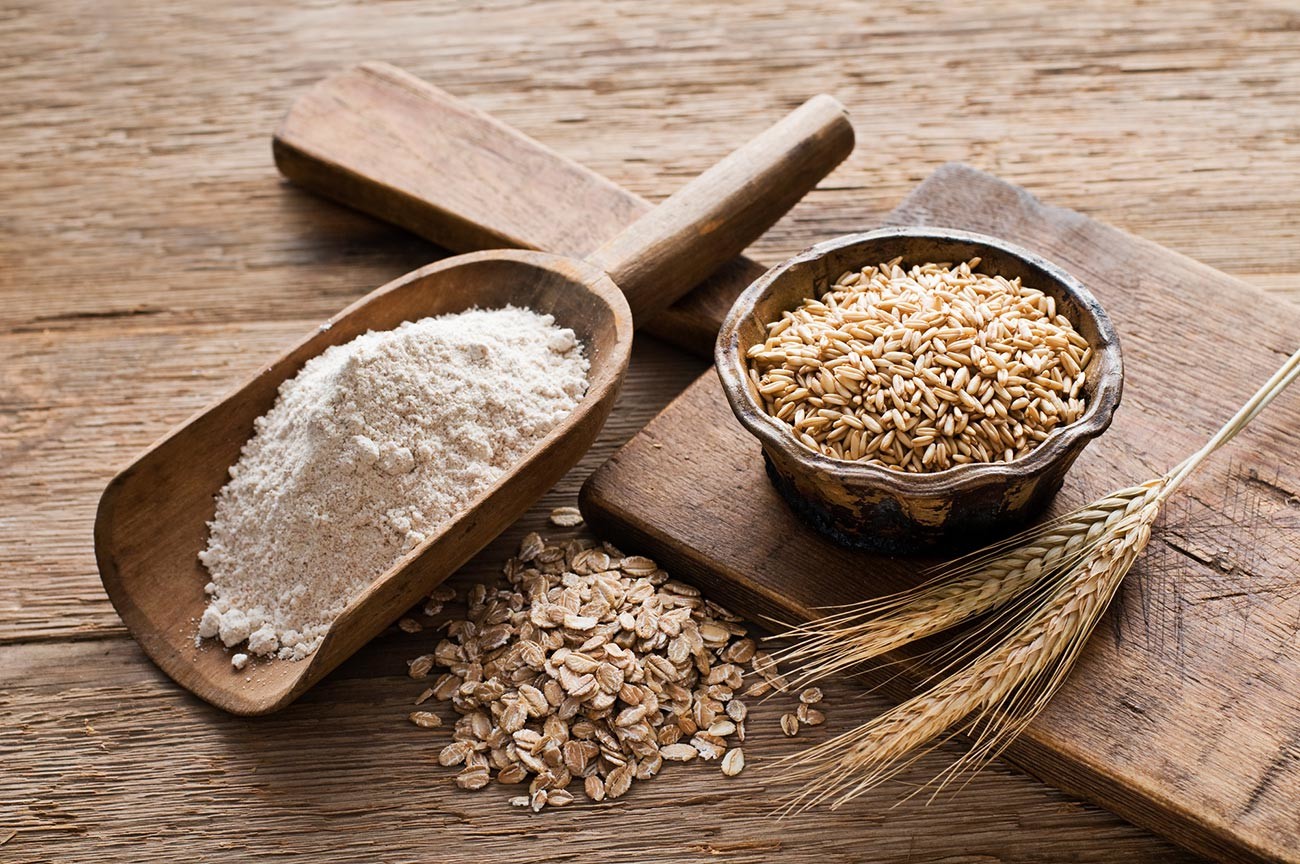 Before Peter the Great, the nutrition of the Russian military men during campaigns was left to themselves – as it was since the ancient times. As soon as any kind of regular army appeared in the Moscow Tsardom, the service-class people were given plots of land for them to provide for themselves – using, of course, the work of serfs.

During the campaigns, however, the pre-Petrine Russian military had to hunt, fish in local rivers, or buy food from the merchants in the wagon trains that followed the army.

The diet of a Russian warrior of those times was simple and not very rich in proteins. Rye bread (baked on the spot where the wagon trains were stationed). Sour cabbage. Onions and garlic – not only nutritious, but boosting the immune system. Different kinds of porridges – easy to transport, fast to cook. Millet, oatmeal, pearl barley porridges were usual for a simple man’s diet. 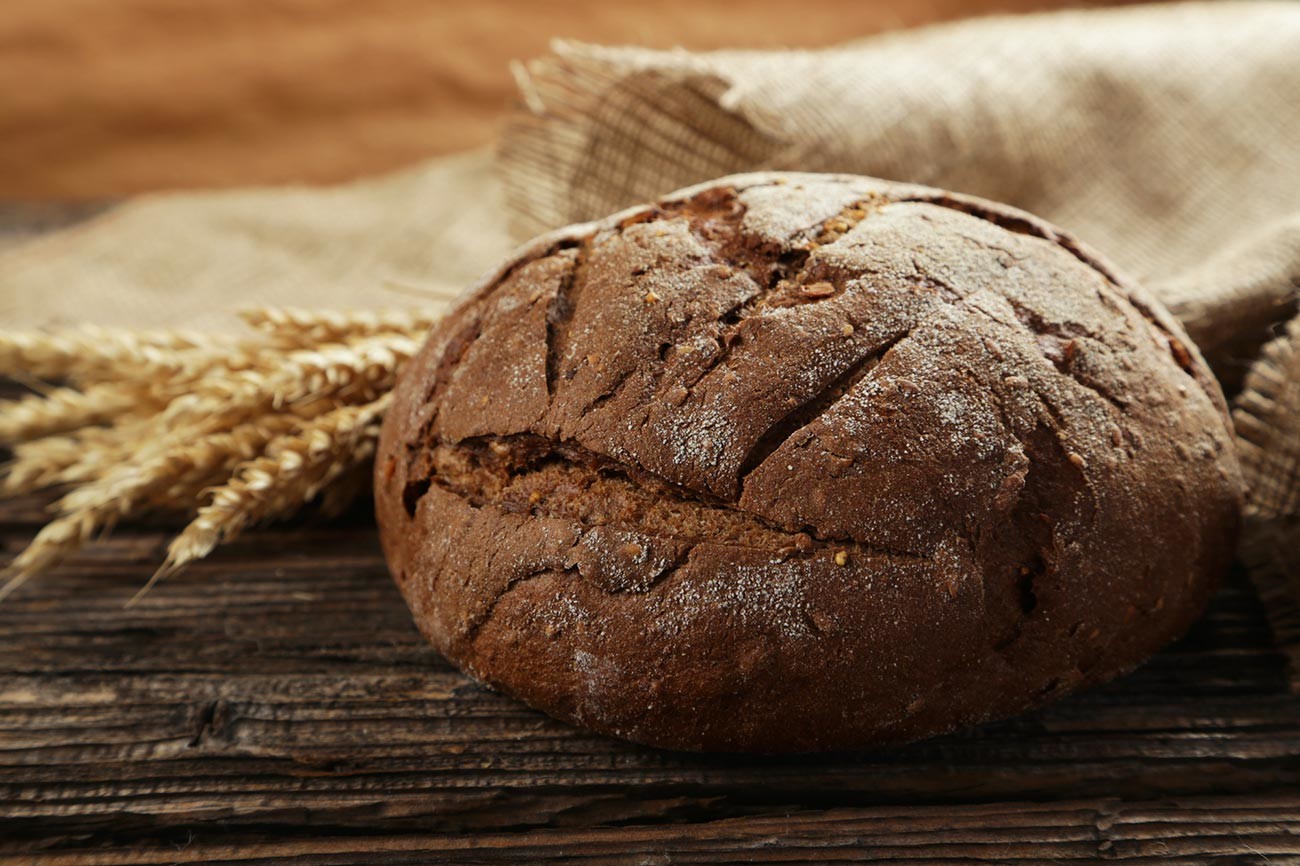 But on the move, soldiers even preferred kama (толокно, tolokno in Russian, derived from the word толочь, toloch, to pound) – roasted oat flour. It did not require boiling, it could be eaten on the go. At bivouacs (temporary campsites), kama was brewed in hot water to get nutritious porridge that went with dried fish or lard. Finely chopped or crushed lard was used to fill almost any porridge.

Dried meat was not always available, especially in moist parts of the year – chunks of dried meat could rot very fast in moisture. Instead, soldiers took dried mushrooms and turnips with them on long marches. But all of that wasn’t supplied by the army officials – everybody was largely left to provide for themselves. Obviously, the soldiers hunted and fished where and when they could.

Peter brings in the meat 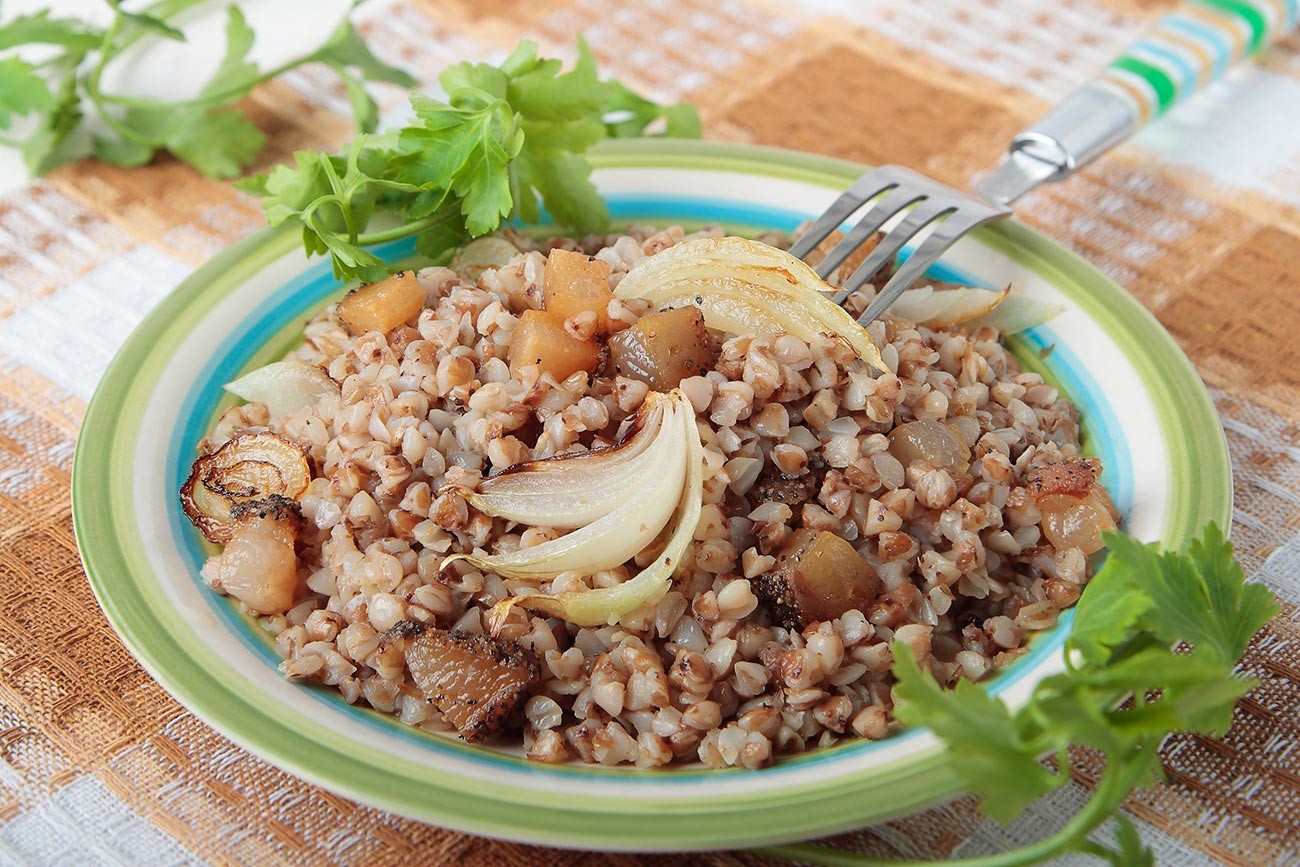 Buckwheat porridge with onions and mushrooms.

Without regular supply of proteins, the Russian army of pre-Petrine times was badly nutritioned. And maybe this was one of the reasons for its largely poor performance in the 17th century.

It was Tsar Peter who, in 1700, first created a special army official, Proviantmeister General, who was responsible for food supply of the Russian army.

Now, every soldier’s food allowance consisted of two parts: his food and forage for his horse. During foreign campaigns, only forage was given to soldiers, taking for granted they would feed by looting the enemy’s territory. Monstrous enough, the military ethics of the 18th century considered captured territory subject to looting by default.

But at home, a soldier’s daily food allowance was: 820 grams of rye bread, 410 grams of beef, 250 milligrams of vodka (a glass), 3.27 liters of beer! Also, every month, a soldier received nearly 6 kilograms of different dry porridges, as well as 820 grams of salt. The higher the military man’s rank was, the more food he was allocated – for example, a colonel was entitled up to 50 daily rations. 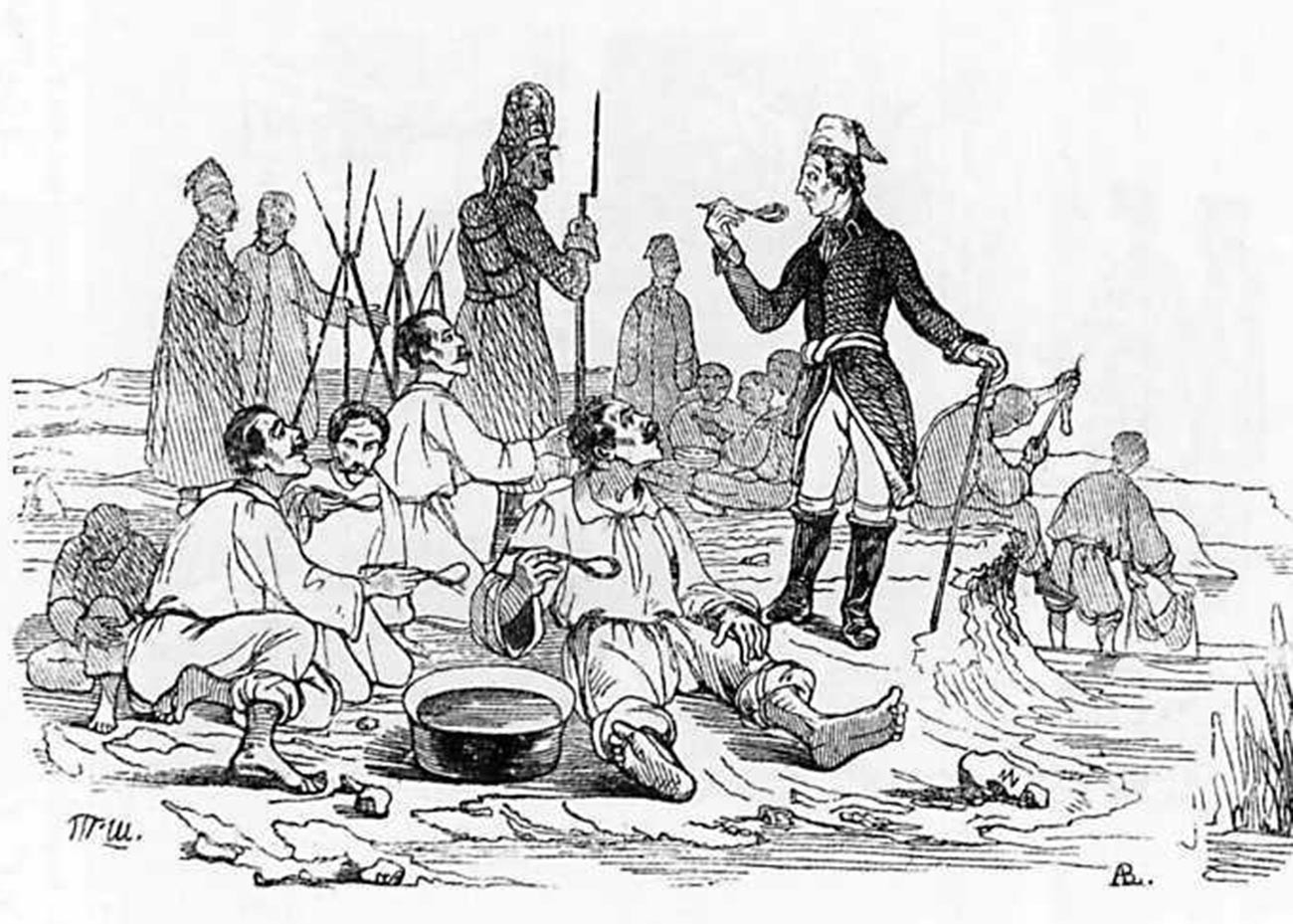 Field Marshal Alexander Suvorov shares a meal with his soldiers.

This doesn’t mean, of course, that colonels would receive 20 kg of meat. The daily allowance was given out as money to company commanders and the supplies included in the everyday allowance could be bought from merchants in the wagon train with this money. In 1720, a fixed norm was established – 75 kopecks a day “for salt” and 72 kopecks “for meat”. The soldiers received the money along with their salary. The purchase of the food and then the cooking was done by cooks selected by each company (100 to 250 soldiers) among themselves. The cooks traveled with the wagon train – they would go ahead of the army and arrive at the next stop on the march early to have time to cook the food.

Subsequently, Peter’s soldier diet finally had meat! But it lacked fats, fish, vegetables – the same cabbage, beets, onions, turnips, garlic, etc. During religious fasts, the duration of which at that time totaled 200 days a year, meat would be substituted with fish.

Peter cared very much about the quality of bread: “One needs especially to see that both bread and flour were not rotten or smelly, so that no disease would occur in the army,” Peter wrote in his Military Statute of 1716. “It is necessary to control the [staff of the] field bakeries, so that [...] they wouldn’t diminish the weight [of flour] defined by the rules.” 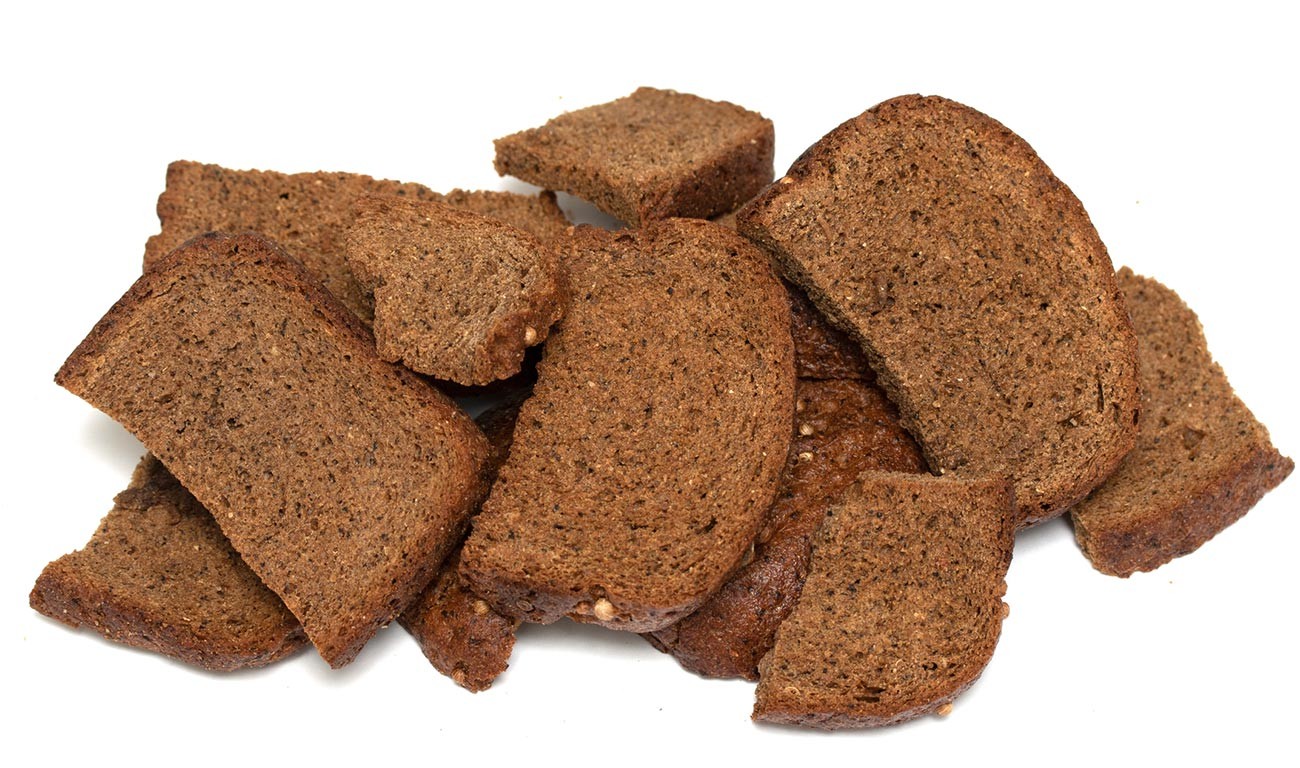 The soldier’s diet, according to Peter, was only about 3,100 kilocalories, while the daily nutritional requirement of a man aged 18-40 years, engaged in heavy physical labor, is 4,200-4,500 kilocalories. Still, the diet stayed roughly the same throughout the 18th century.

During the time of Elizabeth of Russia, dried bread crumbs became part of the diet – lightweight, easy to carry. But during long campings and city sieges, soldiers couldn’t sustain themselves on bread for long, as they would start having digestive disorders – constantly eating dried bread traumatizes the epithelium of the human intestines and causes bleeding. “Bread crumb diarrhea” became usual in the army.

After the Napoleonic wars, nutrition in the Russian army became even worse. Meat became rare again in the soldier’s diet. Instead, the soldiers were fed soups (cabbage soup, pea soup, oatmeal soup, etc.) and the same oatmeal and barley porridges. This just wasn’t enough to keep the soldiers healthy. Scurvy, a disease caused by lack of vitamin C, was spreading among the military personnel. Historian and doctor Alexander Puchkovsky wrote that in 1830, nearly 760 thousand soldiers were sick with scurvy, over 70 thousand of them died. 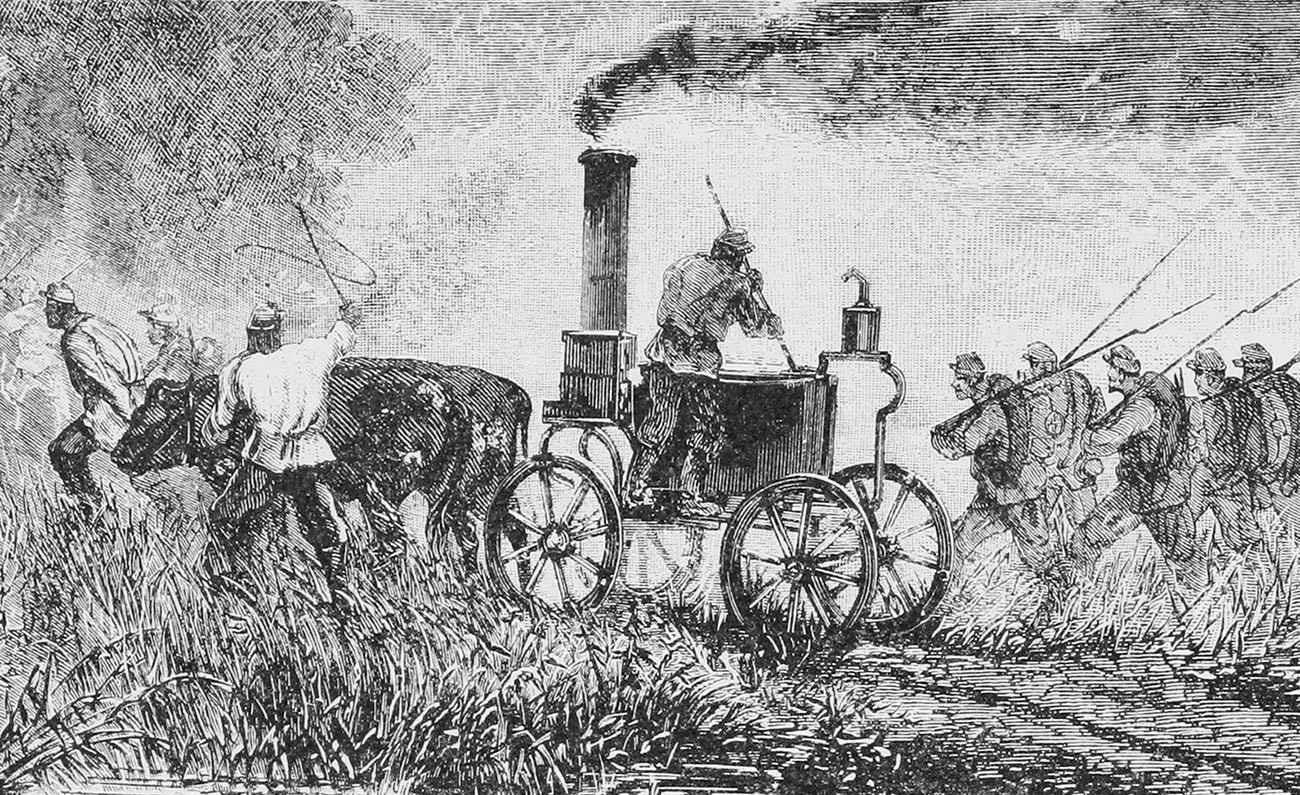 Poor nutrition negatively affected the performance of the army: the Russians had a hard time with the Warsaw uprising in 1830-1831, as well as with the Hungarian revolution of 1849. In the Crimean War, supply problems were among the heaviest ones – again, just like in the Russo-Turkish War of 1735-1739, there weren’t enough supply trains and food to support the Russian army in the Crimea. During the whole Crimean campaign, fruits and vegetables were unavailable to the Russian army and the local Crimean resources were quickly drained. Bad nutrition was one of the main reasons for Russia’s defeat in the Crimean War.

To fight the corruption in the army supply system, in the times of Alexander II, the army officials switched back to giving soldiers a compulsory food package that included 913 grams of flour and 120-130 grams of porridge daily. Not much – but in the mid-19th century, German or French soldiers’ bread allowance was just 750 grams a day.

Meat, fat, vegetables and oils were not included in the compulsory rations and money was still given to soldiers above their salary to buy the necessary products from the supply wagons. However, fresh vegetables were in low supply again – instead of them, peas and cabbage were usually on the soldier’s menu.

After the 1877-1878 Russo-Turkish war, where a lot of soldiers received frost burns and caught colds during the winter campaigns, the Russians returned daily alcohol allowance of 145 grams of “bread wine” (vodka). With the increasing consumption of tea, it was also introduced to the soldiers’ menu – in 1905, soldiers were entitled to 737 grams of tea annually – meanwhile, English soldiers received 2,5 kg tea a year and an English sailor – over 3 kg. 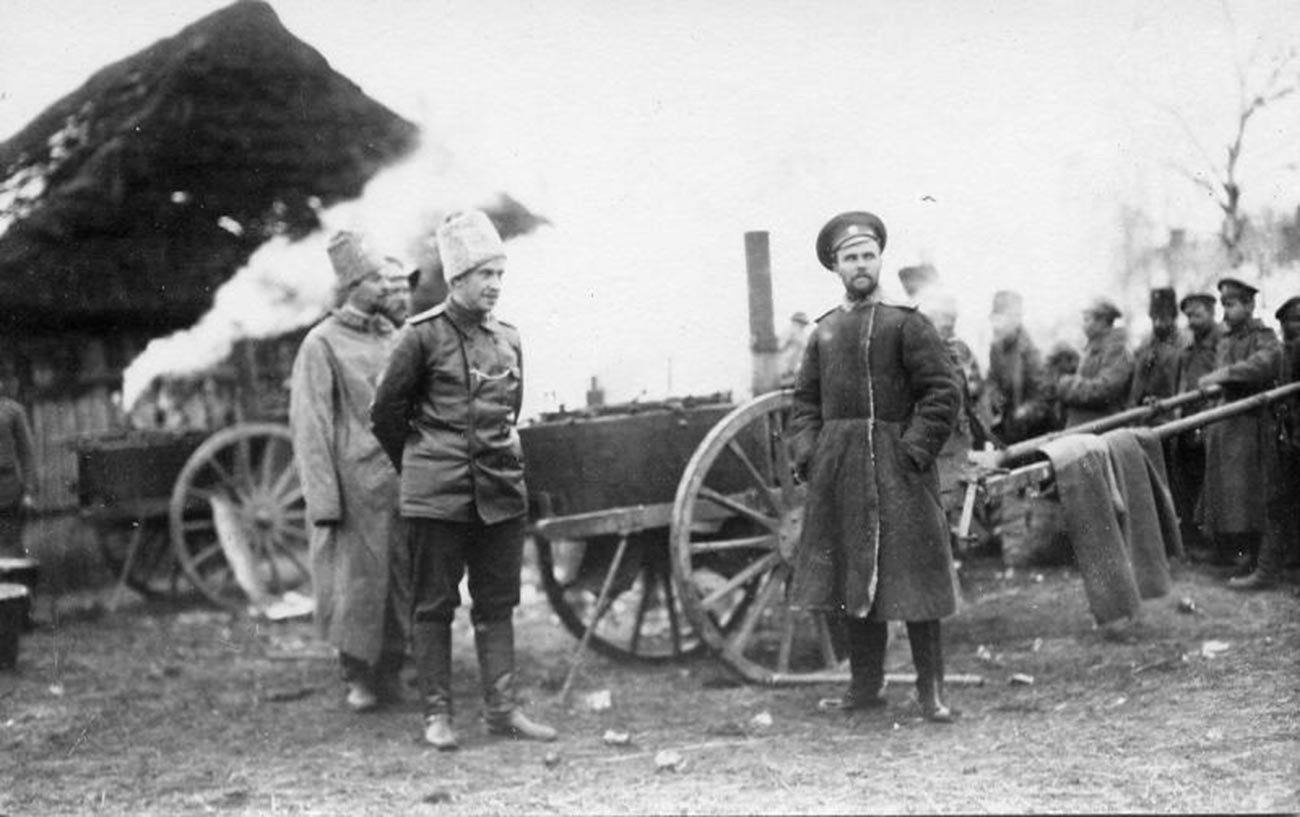 Canned goods were slow to introduce in the Russian army – in 1873 during the Khiva campaign, when canned soups and meat first appeared in the army, the Russian soldiers didn’t eat them. But by the end of the 19th century, canned stewed meat became usual for Russian soldiers. The cans were to be opened with a knife or a bayonet, warmed up on the open fire and the stew eaten right out of the can.

By the beginning of the Russo-Japanese war, all Russian army regiments were equipped with field kitchens which allowed cooking even during marches, on-the-go. Only in some army companies was cooking still done the old-fashioned way, in pots and cauldrons. By the early 20th century, the food supply of Russian army was no inferior to that of the European armies.