How soldiers were DRAFTED into the Imperial Russian Army 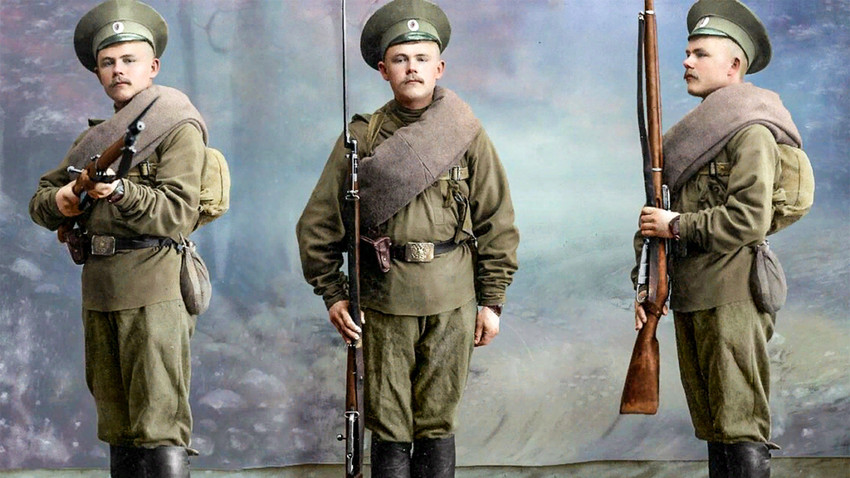 Public Domain, color by Klimbim
‘Conscript obligation’ in Tsarist Russia had both military and social meanings.

In 1749, Ivan Nikitin and Boris Chelnokov, two peasant workers from the Nizhny Tagil metal plant, were chosen to be recruited to the army and put in shackles to prevent them from fleeing. Nevertheless, they attacked their guards, ran to the home of their friend Stepan, who broke the shackles and set the peasants free. Stepan and two of his brothers fought off the guards with knives and fled, too. In 1782, Petr Vostroknutov, another peasant worker in Nizhny Tagil, used the help of his two sons to flee the draft – they fought with knives, scythes, axes and a rifle and fled to the forest.

That’s what people were willing to do to escape conscription in the 18th century. So, what was so scary about being drafted into the Russian Imperial army? 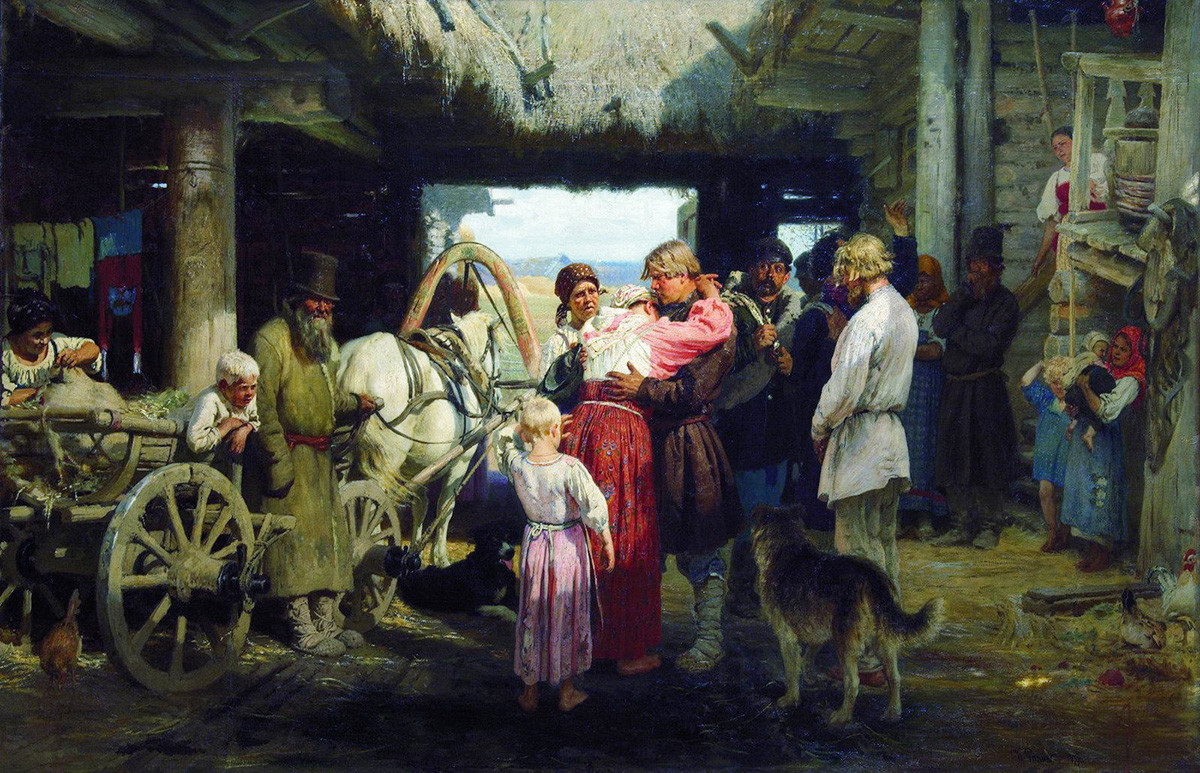 Before, the Russian Landed Army didn’t have regular staffing. As foreign military threats were growing immensely in the early 18th century, Peter the Great, who, at the time, had begun major reforms of the military, was forced to introduce conscription in 1705.

“Conscript obligation” (рекрутская повинность) was in effect for all Russian men, including nobility. All Russian noblemen were obligated to serve the state, either in the military or in civil service. For all other denominations in the Russian society (serfs, peasants, townspeople), conscription was based on quotas – for example, the state could demand 1 conscript for every 100 serfs once in 5 years. From 1705 to 1802, there were 73 conscript drafts in total.

Serf owners (be it landlords, churches or monasteries, factory owners, etc.) were responsible for bringing in the necessary amount of conscripts. During the 18th century, it was the landlord who supplied a conscript with basic clothing and food he needed to get to the conscription point. But how were the conscripts actually chosen?

Rural peasant societies (obschinas) were to choose the demanded conscripts from their young people. At first, they were to be from 20 to 35 of age, healthy, no less than 1.55 meters tall and preferably unmarried with no children. They would go into military service for life.

Some could be excluded – first of all, the only sons and feeders in the family (including those who had younger underage brothers at the time of the draft). Lists of the village families were kept and controlled by the rural administration. Obviously, most of the peasant families would do anything to save their sons from conscription – and that’s where bribery and escapes started.

What do conscription and wedding have in common? 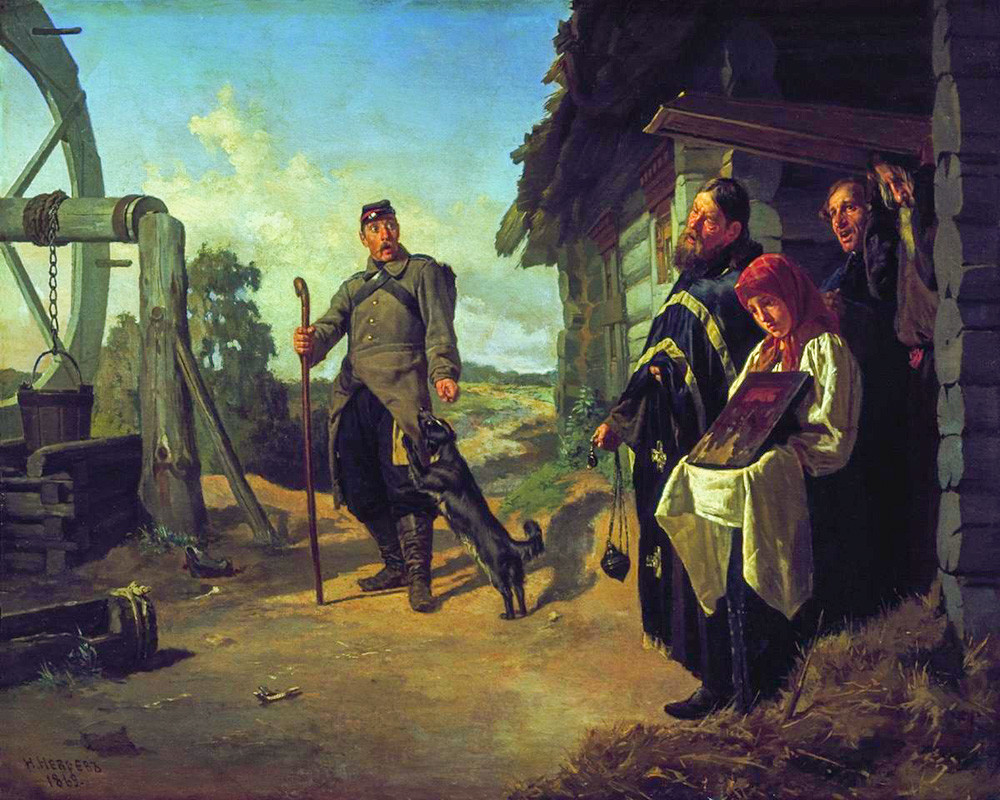 For bribes, a family with two sons could be recorded as two families with one son in each one – this way, both will come across as “sole feeders” and wouldn’t be subject to conscription. For bribes, a wealthy peasant could make a man from a less wealthy peasant family (that ironically needs the working hands of a young guy more) go to the army instead of his son. Also, there were fugitive serfs, who willingly went to the army to finally free themselves from serfdom, and people who would take the place of the conscript for money. It is obvious how negatively these things affected the overall quality of the drafted people. Conscripts even inflicted injuries on themselves in order to make them unfit for service – knocking out teeth, broke their arms, twisted their legs, etc.

When a young man was finally chosen to be drafted, the ‘seeing off’ began. The conscript would become a very respected person all of a sudden, even though he was in metal shackles (as we said before, the conscripts were shackled to prevent them from fleeing). “Nobody is angry with him [the conscript] and he is not guilty of anything and if he is, he’s already forgiven,” Pavel Yakushkin, a 19th-century Russian ethnographer, describes how conscripts were treated in the Russian villages. “The seers-off always fed the conscripts very well and served them vodka. A conscript was put in a carriage driven by a pair of horses and taken to the town where the conscript office was. The only other occasion when a rural guy would ride two horses was at his wedding,” Yakushkin noted. In town, the soldier’s forehead was shaved and he was then taken off together with others to his future military formation’s location. 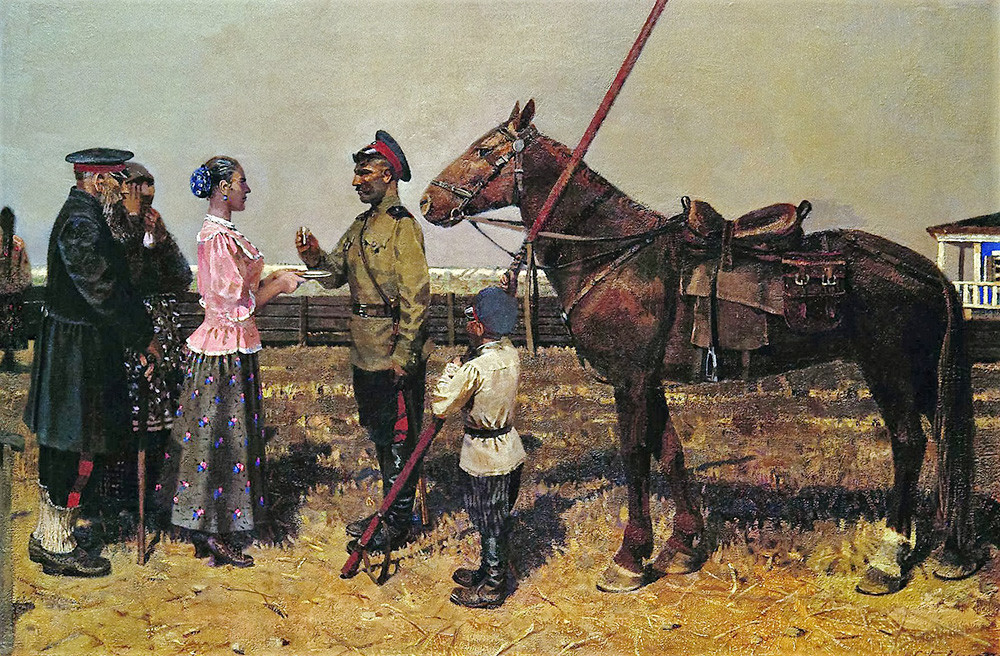 With time, the conditions of the draft eased a bit. Since 1736, noble families were allowed to keep one son ‘at home’ to manage the estate and other property. In 1762, noblemen were allowed not to serve the state at all (although in noble society, such people were seen as outcasts). Starting from 1776, sons of merchants could buy themselves out of the draft. Sons of priests were also excluded in the second half of the 18th century.

In 1793, lifelong service for soldiers was changed to 25 years, by 1830 it diminished to 20 and, by 1874, when total conscription was introduced, the service lasted only about 7 years. Already in 1858, one in five potential recruits were exempt from conscription or had paid money to get out of it. 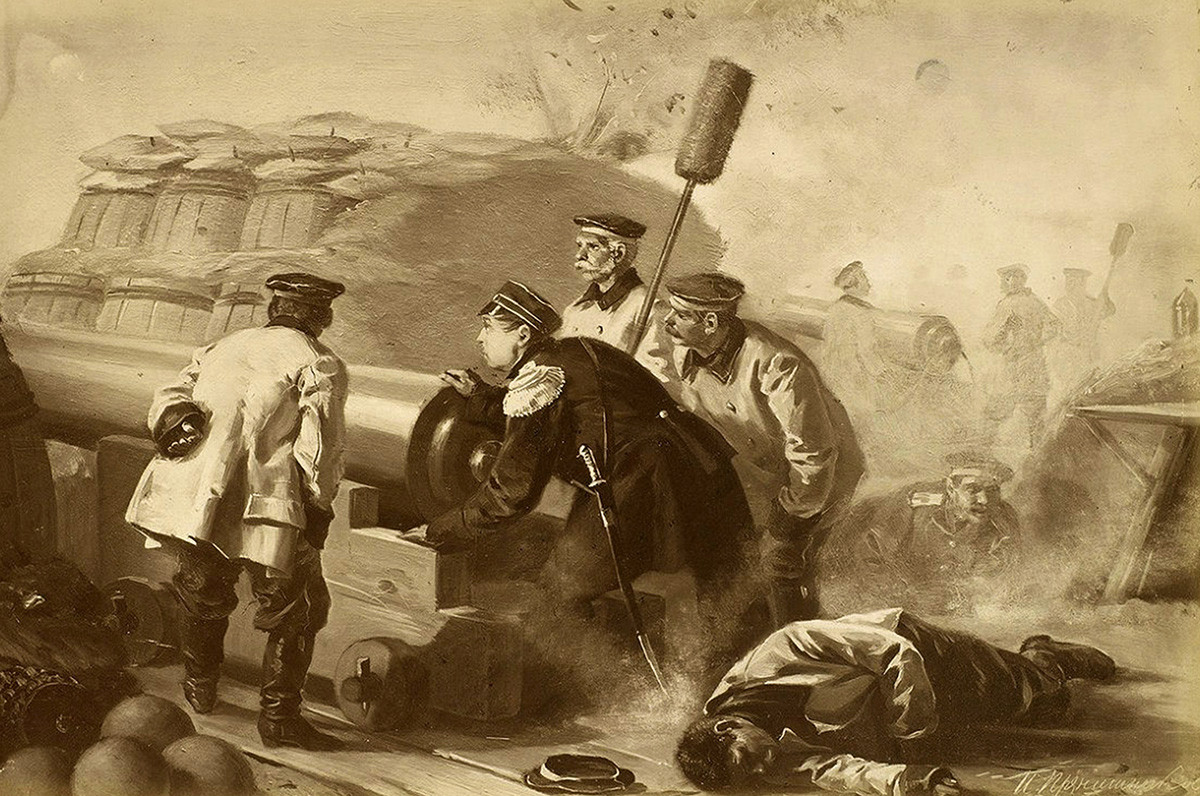 Life or, later, even 25 years of service in the eyes of the fellow villagers was the same as death. Just like a wedding (or a funeral, for that matter), for peasants, the conscription was a kind of a rite of passage – the young man forever leaving his village and heading into another world. Even if a soldier survived numerous battles, he would usually forget the art of peasant labor and, therefore, be permanently excluded from the rural community. The villagers bid farewell to the recruit as if they were burying him – hence the pair of horses, funeral songs and even professional mourners that mourned during the seeing-off of a soldier.

The social meaning of the conscription 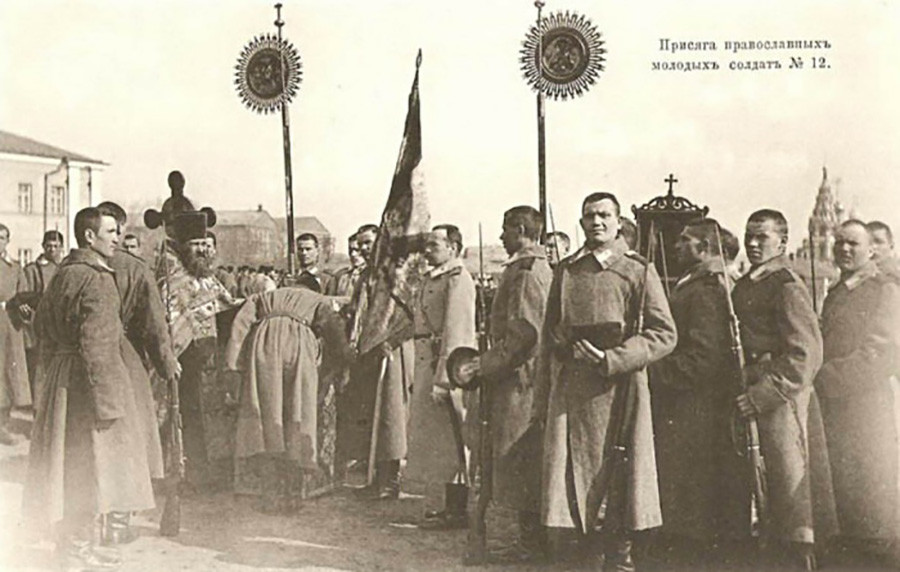 First of all, the conscription gave men (and their families, if they had them) a path out of serfdom – a serf who became a soldier would then be free of his landlord and if he returned from military service, he did so as a free man. Officially retired soldiers could even own land. According to statistics from 1816–1834, most of the peasants who stopped being serfs did so through military service.

The soldiers were allowed to marry and take their wives with them. From 1736, the soldiers’ children were given compulsory basic education and would become literate, which was not an easy thing for a peasant to achieve back then. Generally, conscription was a mighty social elevator of Imperial Russia. “I have heard many soldiers ' conversations, in which it is clear that they are well aware of the improvements the service has made in their everyday life,” Yakushkin wrote. 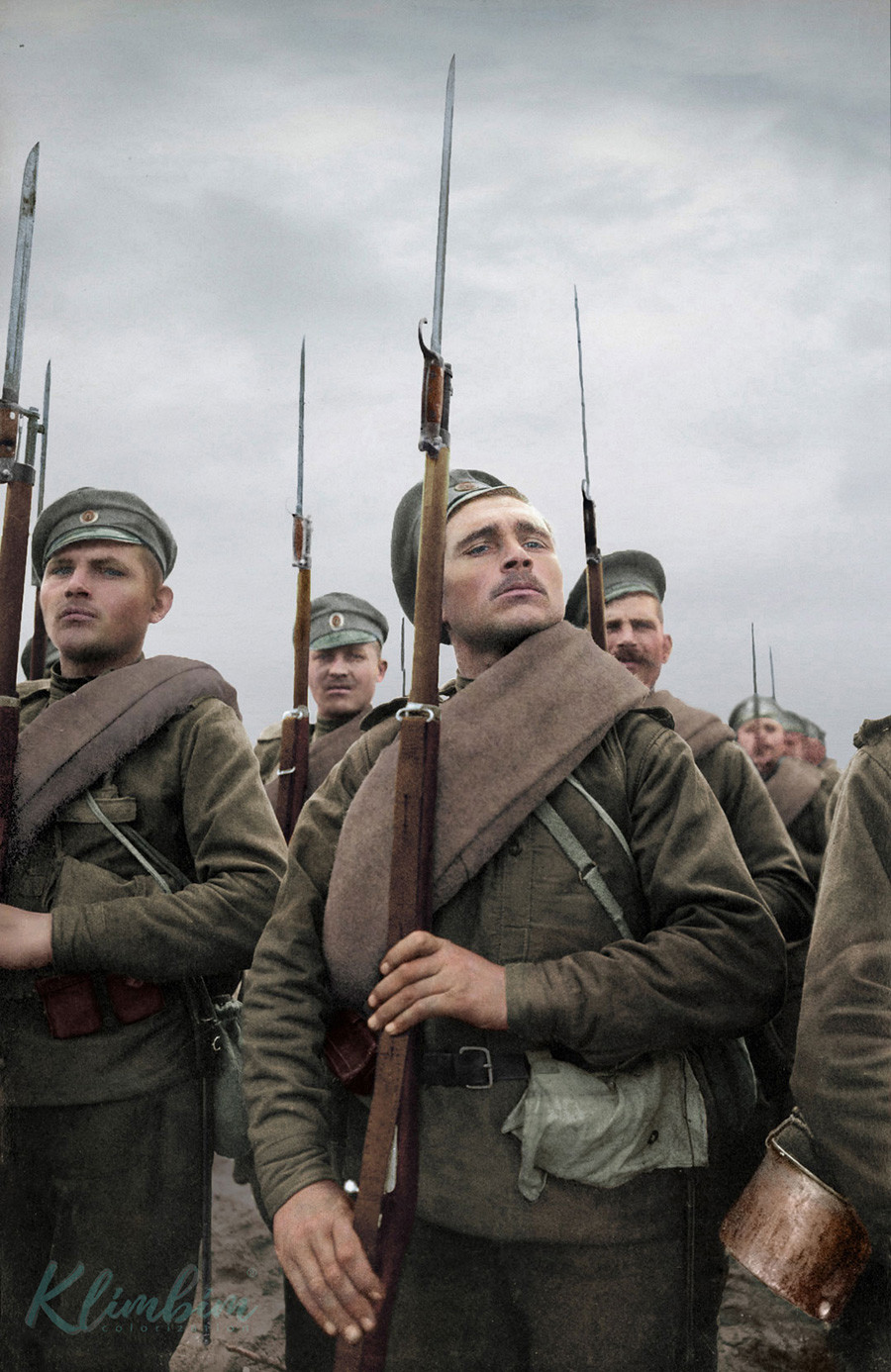 In 1874, the “conscription obligation” was replaced with total conscription – all men who reached 21 would serve for 6 years in the ranks and 9 years in the reserves – after that, people stayed in the “passive reserves” until they were 40. However, certain categories of men were not subject to the draft: the only sons in a family; the “sole breadwinner” of a family (e.g. an older brother with underage siblings and elderly parents); and younger brothers of somebody already serving in the army. For men with basic education, the service was reduced to 5 years, for men who had finished town schools – 3 years, for men with higher education – just 1.5 years. As the population grew, the service term continued to reduce further and, by 1906, people only served a maximum of 3 or less years in active duty.