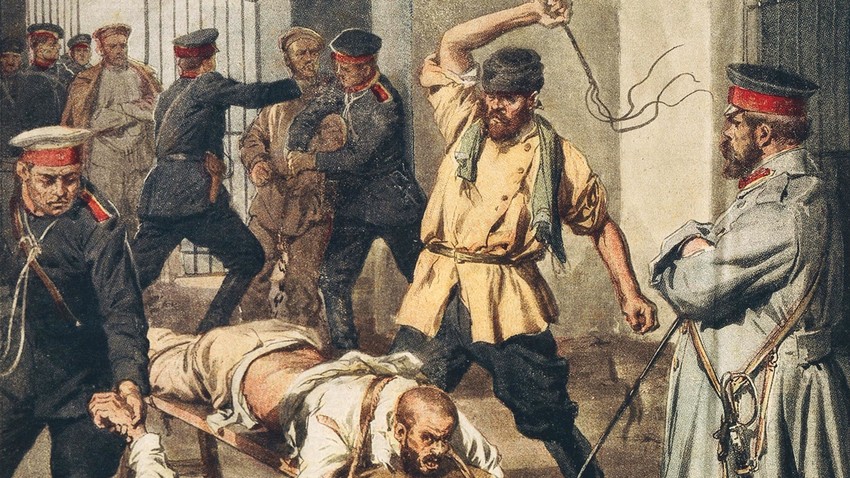 Getty Images
Banned long ago, these barbarous ways of punishing criminals tell a lot about the harsh Russian past. 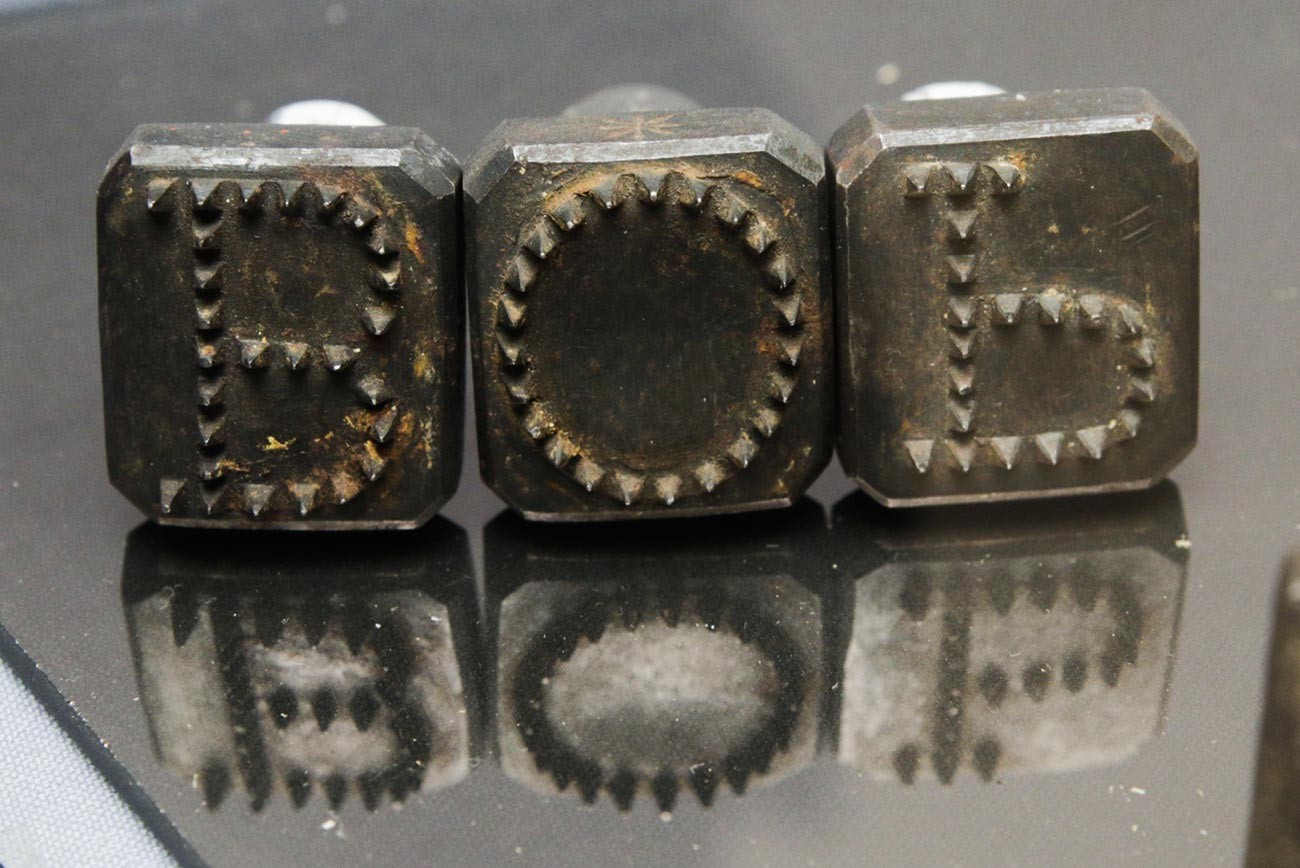 This ancient type of marking criminals is first mentioned in 1398 in a Moscow law that ordered to brand convicted thieves. In 1637, branding was installed as a punishment for coin counterfeiting.

The branding was performed by pressing a red-hot metal brand on the cheeks and forehead of the criminal to mark him with letters. ВОРЪ (“thief”) was usually burnt onto the convict’s face. Single letters В (for вор, “thief”) and Б (for бунтовщик, “rioteer”) were also used for lesser offenses. Peter I installed a new form of branding, using plates with sharp needles in the form of letters – gunpowder was rubbed into the holes left by the needles to make the brand stay there for life. Since 1746, branding was applied to all types of convicted criminals. 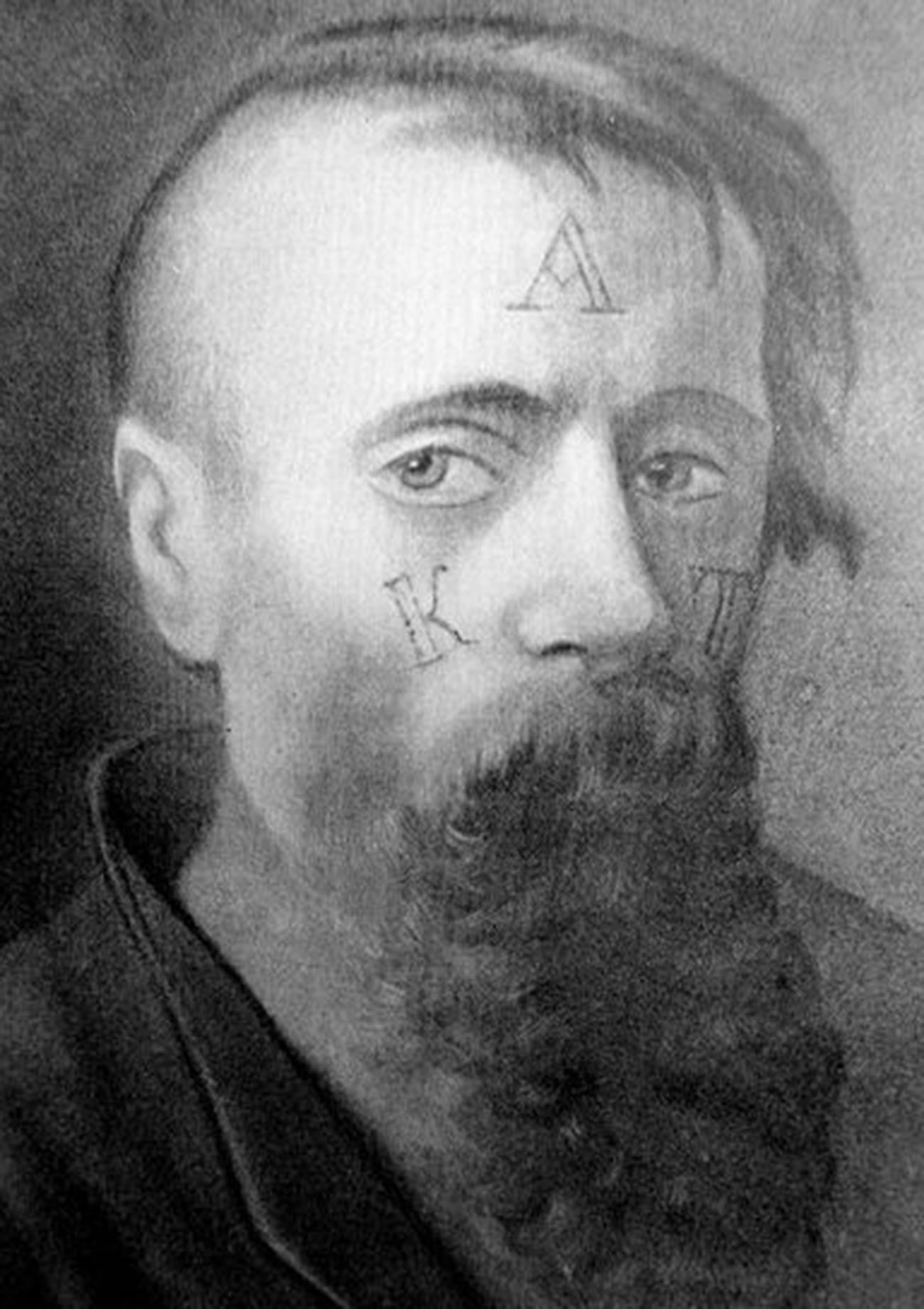 The way branding was performed on a convict's face

In 1754, there was an order to stamp В on the forehead, О and Р on the cheeks of the convicts. Later, КАТ (short for каторжный, “convicted to hard labor”) was to be branded in the same way. Women were exempted from branding by Elizabeth of Russia in 1757. Meanwhile, people over 70 and younger than 21 and noble people were also exempt from branding. In 1863, human branding was finally banned in Russia. 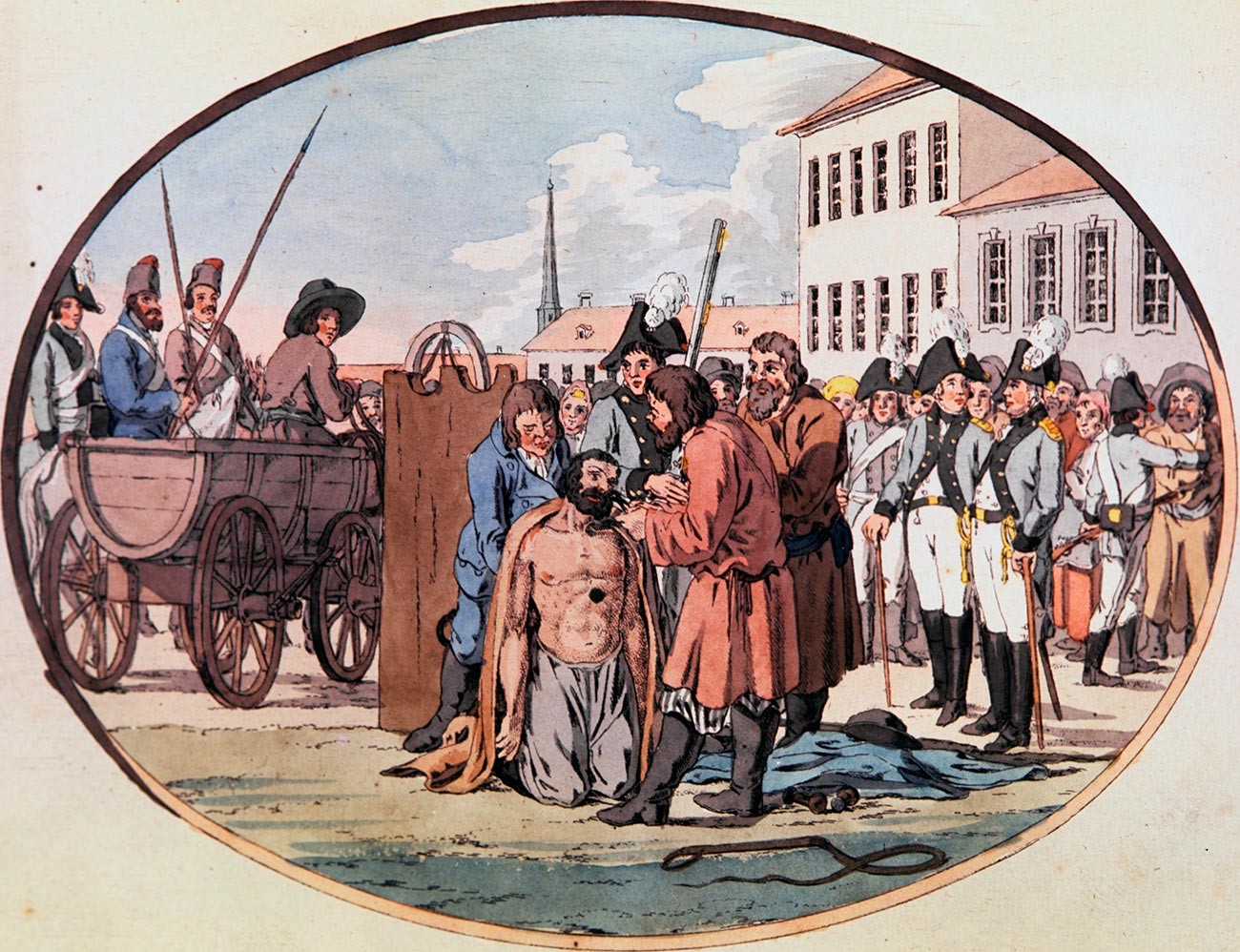 Cutting off fingers, ears and pulling out the nostrils was used in the same way as human branding, to visibly mark the criminal for the rest of their life. Sobornoye Ulozhenie (“Council Code”) of 1649 ordered to cut off an arm of anybody who would bare their weapon in the presence of the tsar, or kill anybody on the tsar’s premises. Horse thieves would also lose an arm.

Thievery was punished with cutting off two fingers off the left hand, or cutting off the left ear (first offence) and then the right ear (second offence). Ears, legs, arms were cut off for counterfeiting and illegal maintenance of drinking establishments.

In 1724, following Peter’s direct order, nostrils of the criminals convicted to lifelong hard labor were taken out with pliers. This barbarian way of punishment was banned in 1817. 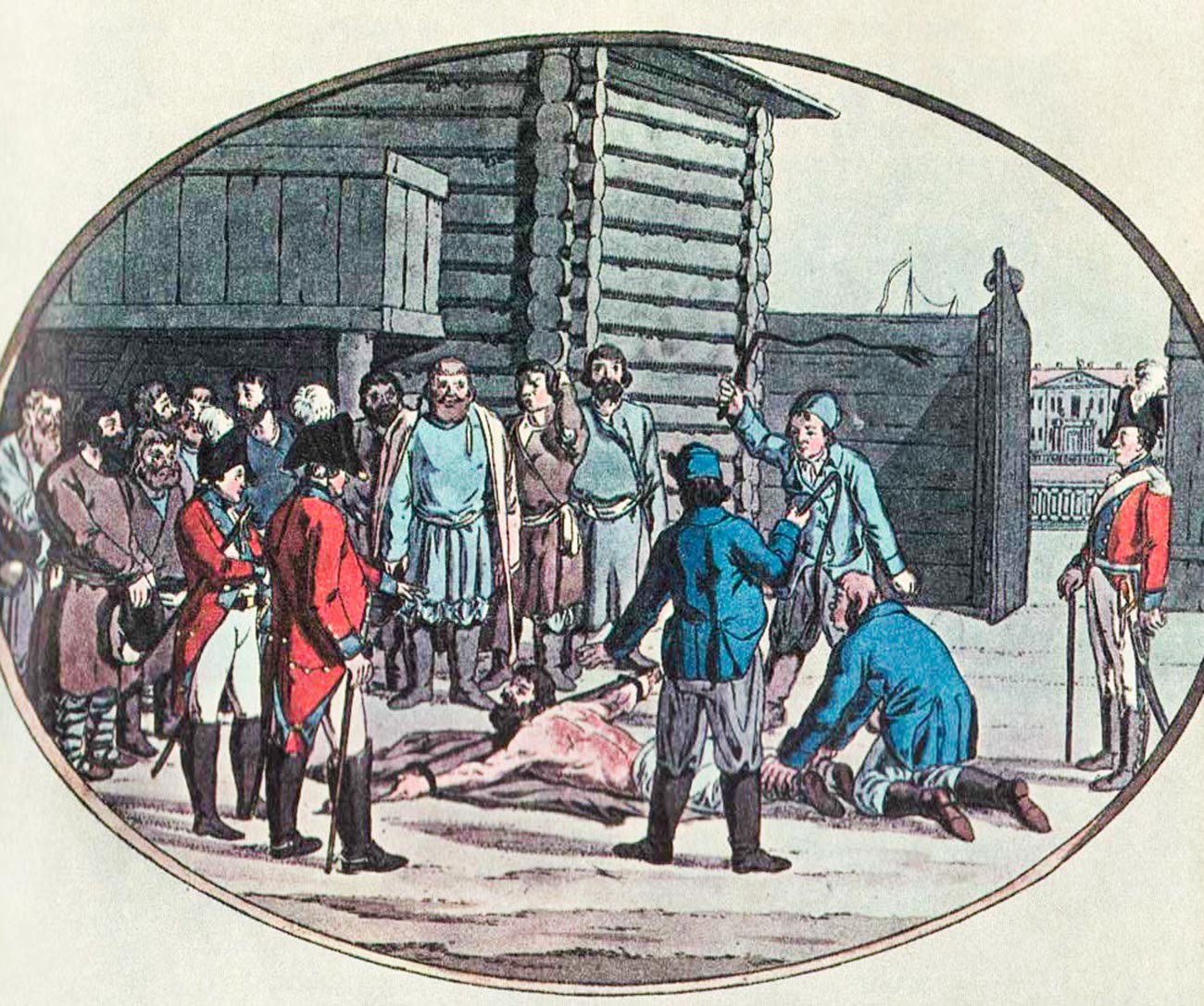 This type of corporal punishment was long-known in Russia. In 1497, it was officially named torgovaya kazn (“an execution on the market square”, i.e. “a public execution”). Scourging was performed with a knout (“whip” in Russian) and required special skills – beginner executioners had to learn this “skill” for as long as a year before taking part in a real execution.

The knout had a wooden handle attached to a 2.5-2.7 meter body made out of several braided leather thongs, ending with a leather “beak” about 70 cm long that was soaked in salt and dried in the sun to make it harder. An executioner stood several steps away from the convict and hit his back only with the “beak”. After every 10-15 hits, the beak softened from human blood and had to be replaced. In 1832, Napoléon-Louis Davout, son of Louis-Nicolas Davout, famous Marshal of the Napoleon Empire, secretly bought two Russian knouts from a Moscow executioner for a lucrative sum of 500 rubles (an executioner’s annual salary was 400 rubles) and demonstrated them in Paris, causing quite a stir in public. Nicholas I of Russia was furious upon hearing about this and issued an order in future to store the executioners’ inventory more securely.

Scourging could really be a death sentence if a person was subjected to 100-200 lashes. The beak would tear the skin apart; one executor confessed he could kill a man in just three blows. “With the first blows, a deep groan was usually heard from the executed, which soon ceased; afterwards they were just chopped up like meat. After laying 20 or 30 strokes, the executioner would pour a glass of vodka, drink it and then go back to work. All this was done very, very slowly,” painter Lavrentiy Seryakov once remembered.

For a bribe, a professional executioner could perform the whole punishment without any harm or just causing mild harm to the convict. However, even after 50-60 “real” lashes, an ordinary man could still die within 2-3 days, because of internal ruptures and bleeding. Scourging was the usual punishment for peasant mutinies and revolts and everyone exiled to Siberia for hard labor was also subject to scourging. It was banned only in 1845 and substituted with whipping. 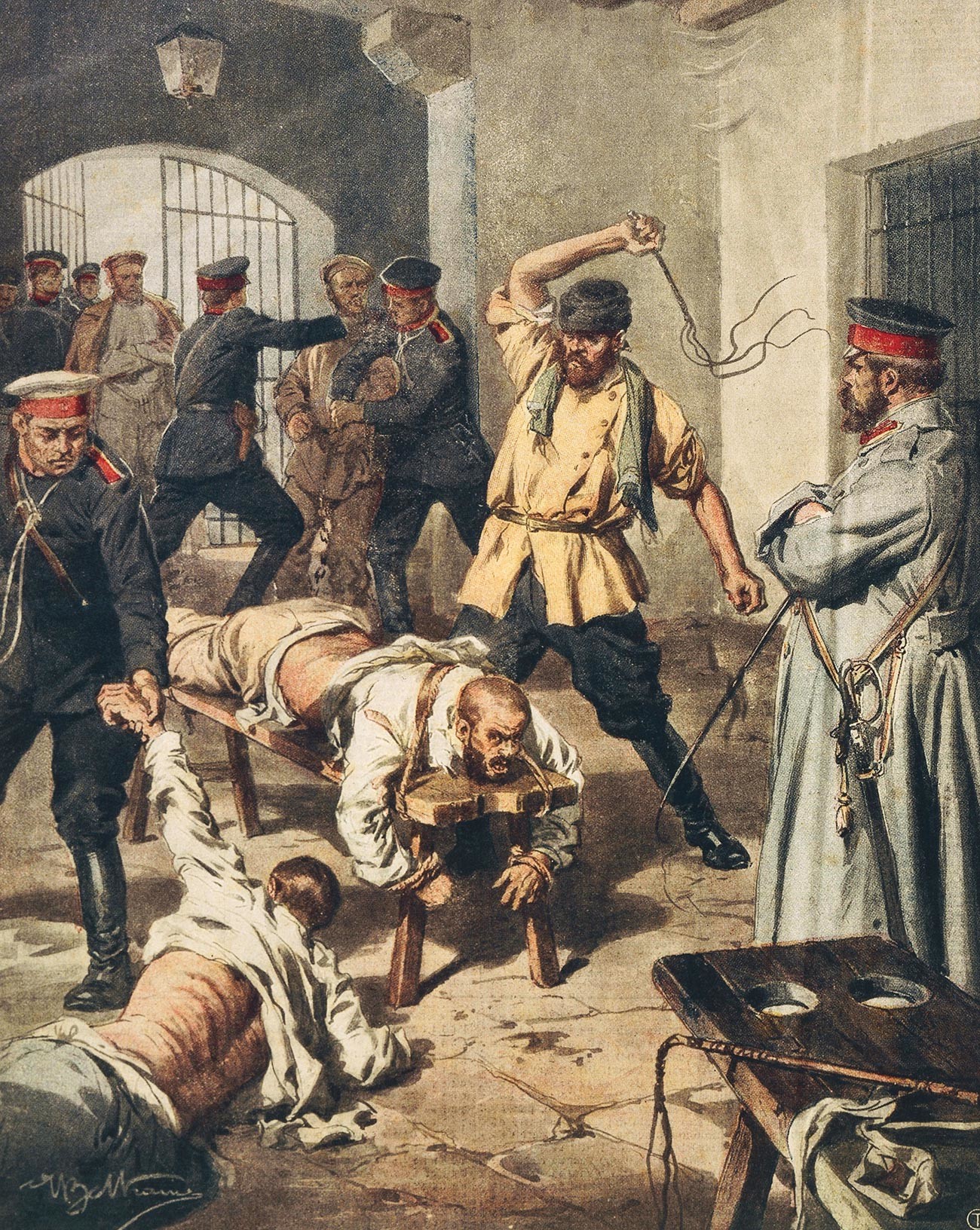 Whipping (lashes) in Russia was a lighter version of scourging. It was inflicted on the members of clergy who were exempt from scourging. It was performed with leather lashes, publicly, with the convicted lying on a pommel horse.

As a corporal punishment, since 1781 lashing was inflicted for minor theft (equivalent of 20 rubles or less). From 1799, lashing and exile to labor villages was inflicted for theft over 20 rubles. Lashes also served as a penalty for serfs (inflicted at the order of their landlords), rioting workers and peasants and as a most severe punishment in educational institutions. Smuggling, incest, bestiality, blasphemy, harboring fugitive criminals and serfs, fraud, theft – all these were reasons for whipping. It was, however, banned in 1863. 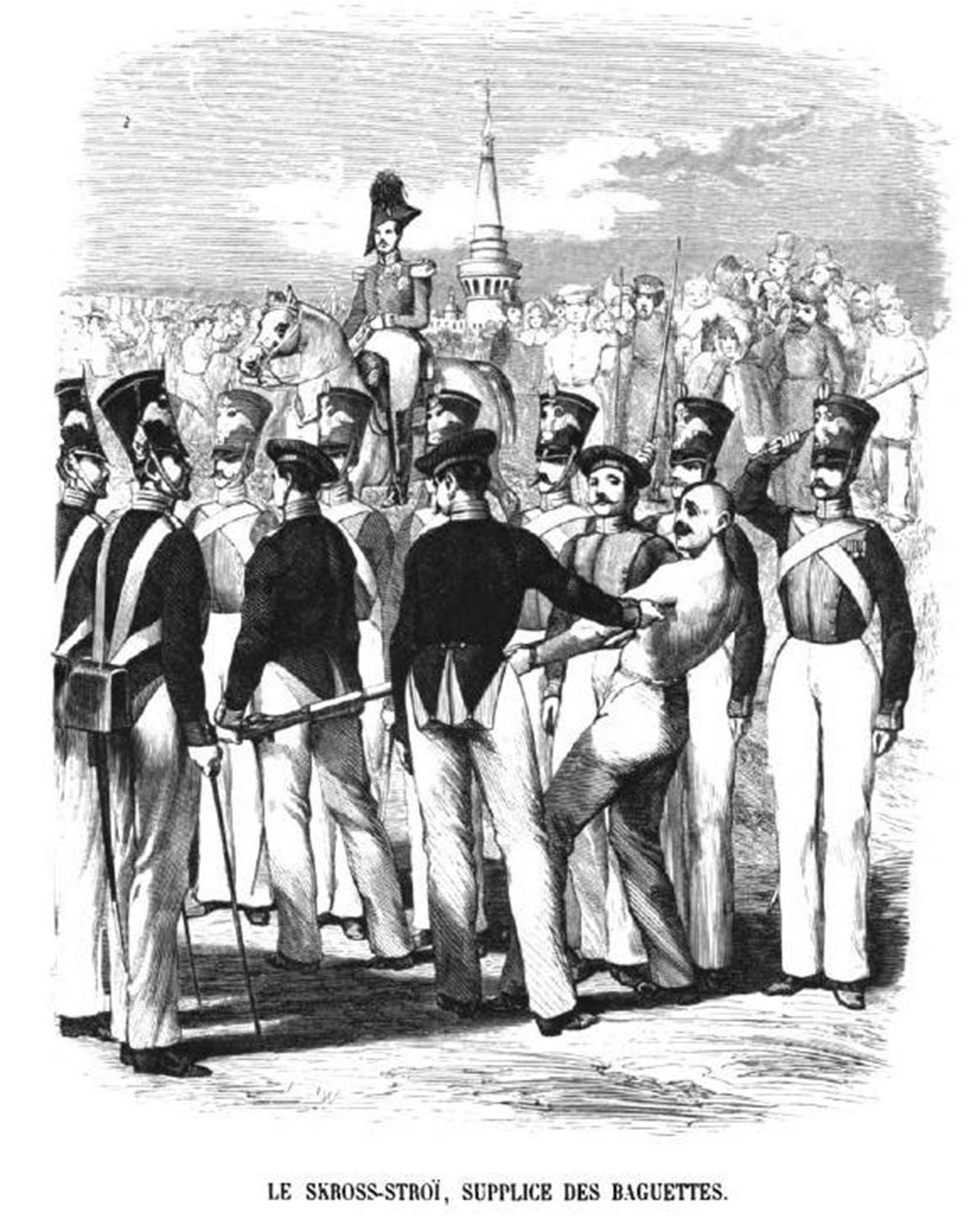 Running the gauntlet in Russia, by Charles-Michel Geoffroy, 1845

In Russia, this form of punishment, when the condemned is forced to run between two rows of soldiers, who strike at him with rods, was often referred to mentioning “spitzrutens” – the tools with which the punishment was performed. The punishment was introduced by Peter the Great in 1701 for use in the military. At first, the spitzrutens were just 2.1-meter-long, 4-cm-diameter willow rods soaked in salt water.

The condemned was forced to pass through a line of 100 to 800 soldiers, who beat him on the back with these rods. To prevent the punished soldier from dodging, his hands were tied around a rifle with a bayonet pointing at his abdomen, so he couldn’t run forward. A soldier was holding the rifle’s butt, slowly leading the condemned between two rows of soldiers. If performed orderly, it also was a death sentence. Often after an execution with spitzrutens, soldiers died within a few days.

Spitzrutens were inflicted for various offences in the army, like “carelessness in combat exercises”, “carelessness in uniform” (100 blows), “drunkenness” (300-500 blows), “theft” (500 blows), etc. For trying to desert the first time, a soldier got 1,500 spitzrutens, the second time – 3,000, the third – 5,000 blows, with maximum possible punishment being 6,000 spitzrutens. A soldier condemned to this amount of blows couldn’t stand them in one session, so they were “delivered” in portions of several thousands, with the condemned healing his back in hospital between them. Of course, a “usual” spitzruten punishment in the army wasn’t too hard on the soldiers backs, otherwise the army would slowly disappear. However, this type of punishment was also banned in 1863.