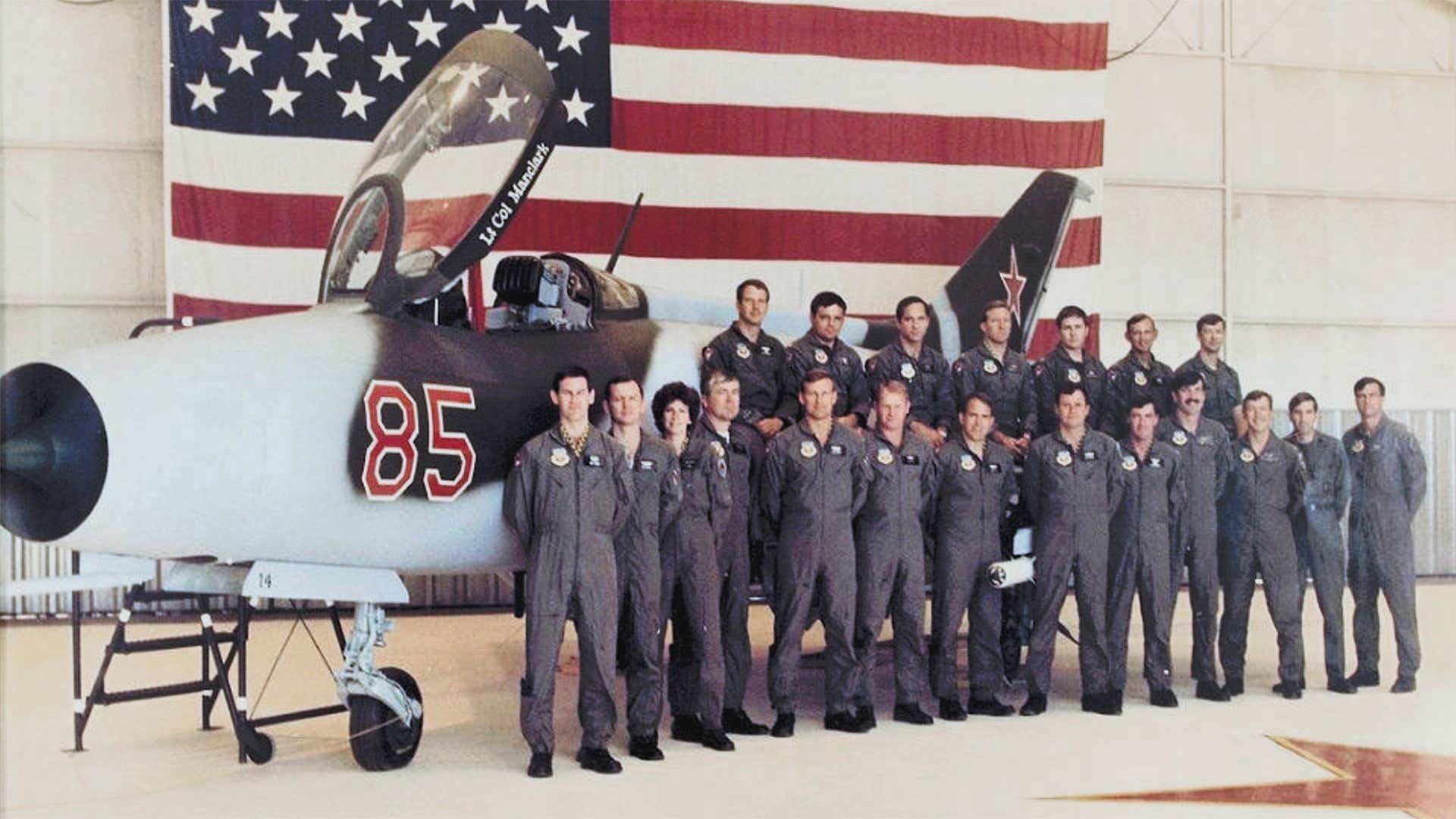 United States Air Force
Nobody in the USSR knew that its potential enemy had dozens of Soviet fighters in combat service.

Aerial combat training is an essential element in the training of military pilots. It is for this purpose that the air forces of many countries set up dedicated squadrons, so-called “aggressors”, whose task it is to imitate the enemy during exercises.

Usually, the role of enemy fighters is performed by domestically manufactured aircraft that have similar technical characteristics to those of the relevant foreign planes. However, there have been exceptions to this rule. For example, during the Cold War, the Americans secretly created a squadron of real Soviet MiGs. 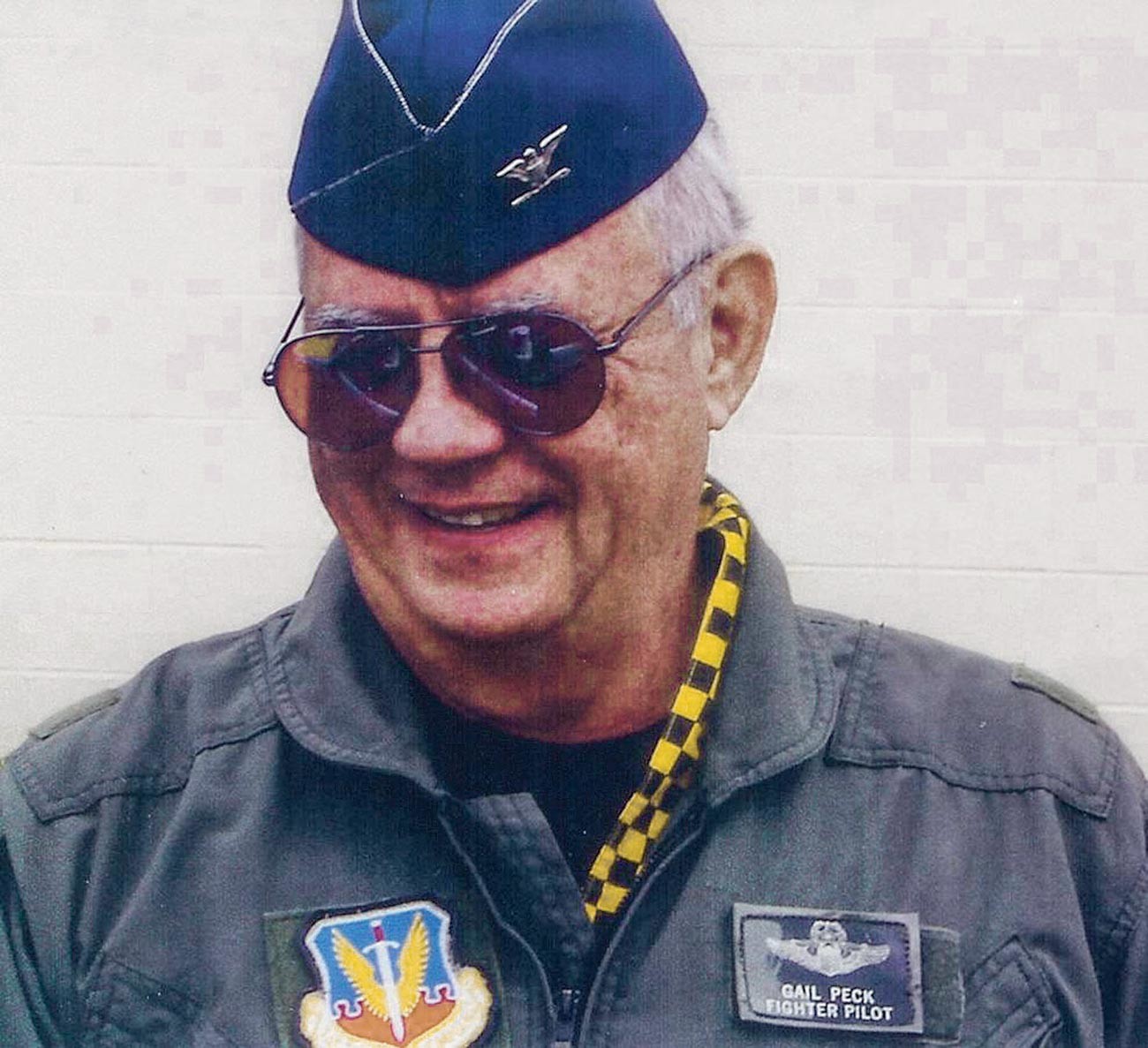 In 1977, as part of the so-called ‘Constant Peg’ program, Colonel Gail Peck and General Hoyt S. Vandenberg Jr. set up the 4477th Test and Evaluation Squadron, also known as the Red Eagles. Disappointed with how the U.S. Air Force had performed during the Vietnam War, the two commanders were convinced that American pilots must be given “realistic training”, i.e. practice aerial combat (albeit in sparring) with real aircraft of a potential enemy.

The only problem was that getting hold of enemy aircraft was no mean task. Soviet fighters were collected from all over the world literally one at a time. They were bought or exchanged from Yugoslavia, Israel, Egypt and other countries. In the 1980s, several Chengdu J-7 aircraft, a Chinese copy of the MiG-21, were purchased from Beijing.

MiG-23 of the 4477th Test and Evaluation Squadron.

Indonesia and Somalia were of great help. In the 1970s, they switched from the socialist camp to the American one and were able to offer the United States several dozen Soviet aircraft they had received from the USSR earlier. But, there were some pitfalls there, too. For example, Indonesia supplied four defective MiGs, out of which only one serviceable aircraft was put together and with great difficulty. 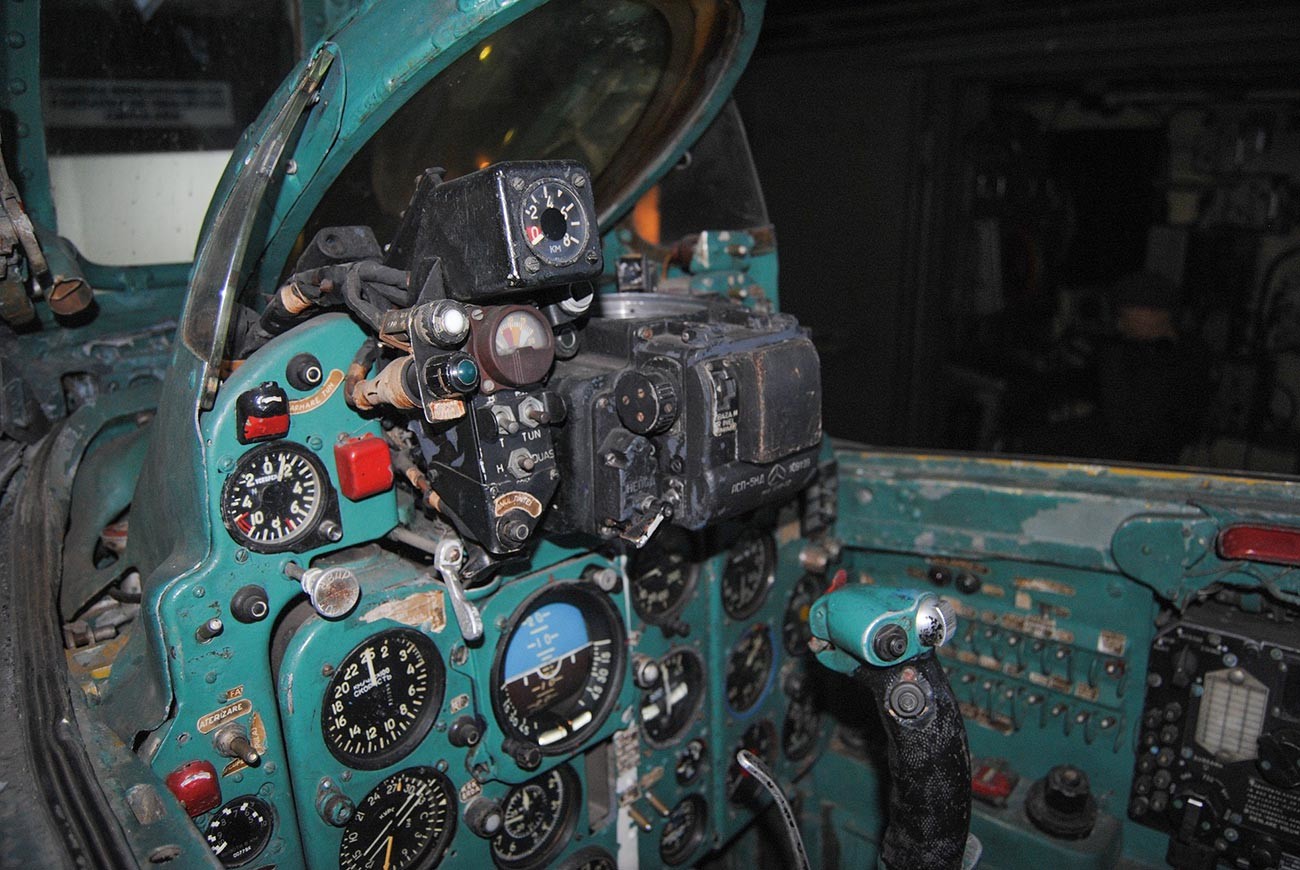 Worth their weight in gold

The Americans had difficulty not only with finding and acquiring Soviet aircraft, but also with maintaining them. After all, they couldn’t just go and buy engines and spare parts for them. Maintenance of the MiGs was carried out by General Electric specialists, while particularly rare spare parts were obtained by CIA agents in Poland and Romania.

Since the aircraft came without technical documentation, pilots had to learn how to operate them from their own mistakes. On more than one occasion those mistakes cost pilots their lives. 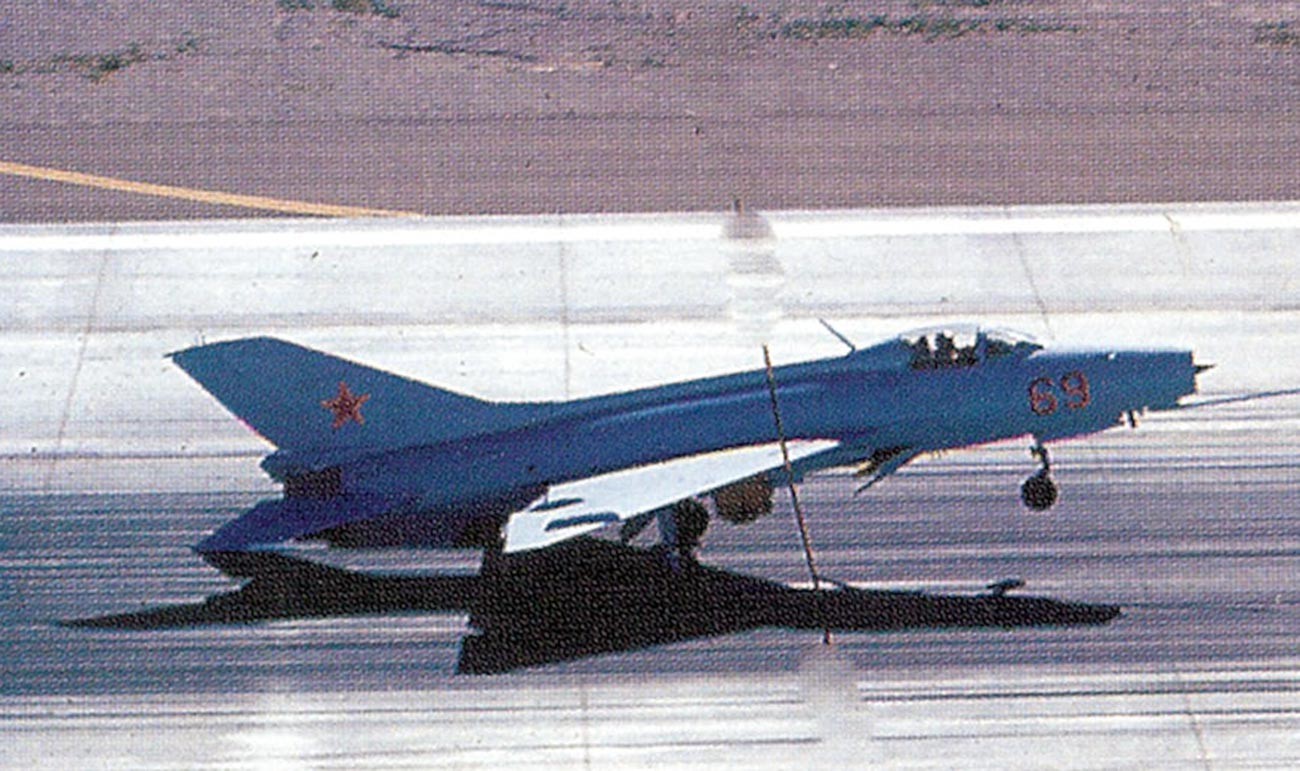 The most troublesome for the Red Eagles were the squadron’s MiG-23s. Pilots loved the aircraft for its speed, but complained of its instability in flight and the difficulty of piloting it. Only the most experienced pilots who had already completed several dozen flights on the MiG-21 were allowed to fly them. On April 25, 1984, Lieutenant General Robert Bond, AFSC (Air Force System Command) deputy commander, crashed in a MiG-23.

Each fighter plane in the 4477th Squadron was cherished like a real treasure. They were never flown at night or in adverse weather conditions. 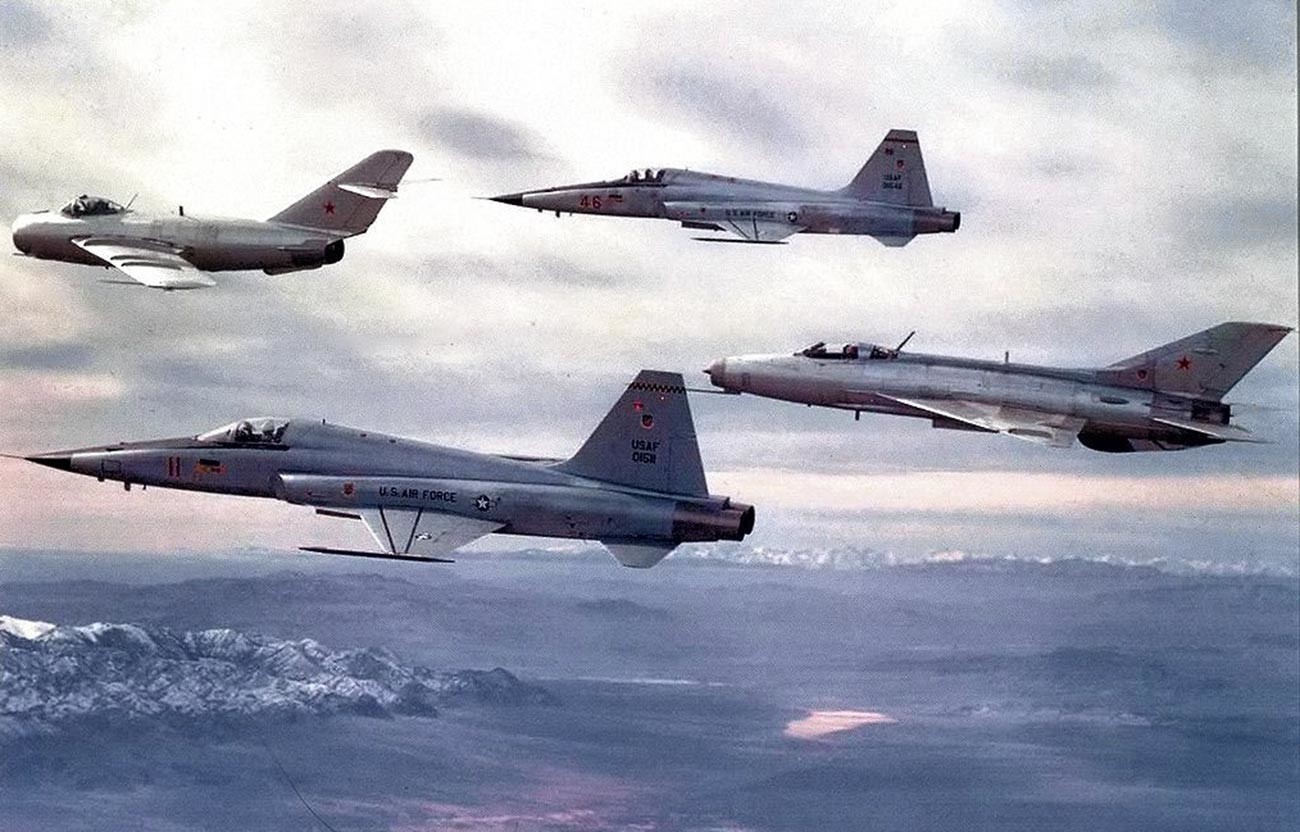 Under lock and key

While the existence of classic “aggressor” squadrons equipped with American planes was no secret to anyone, all information about the Red Eagles was carefully hidden, primarily from the USSR.

Experts had calculated the time and duration of Soviet satellites’ passage over the Nellis Air Force Base and the Tonopah Test Range in Nevada where the aircraft were based: at those times, the MiGs were removed to hangars or hidden under covers that disguised their shape. 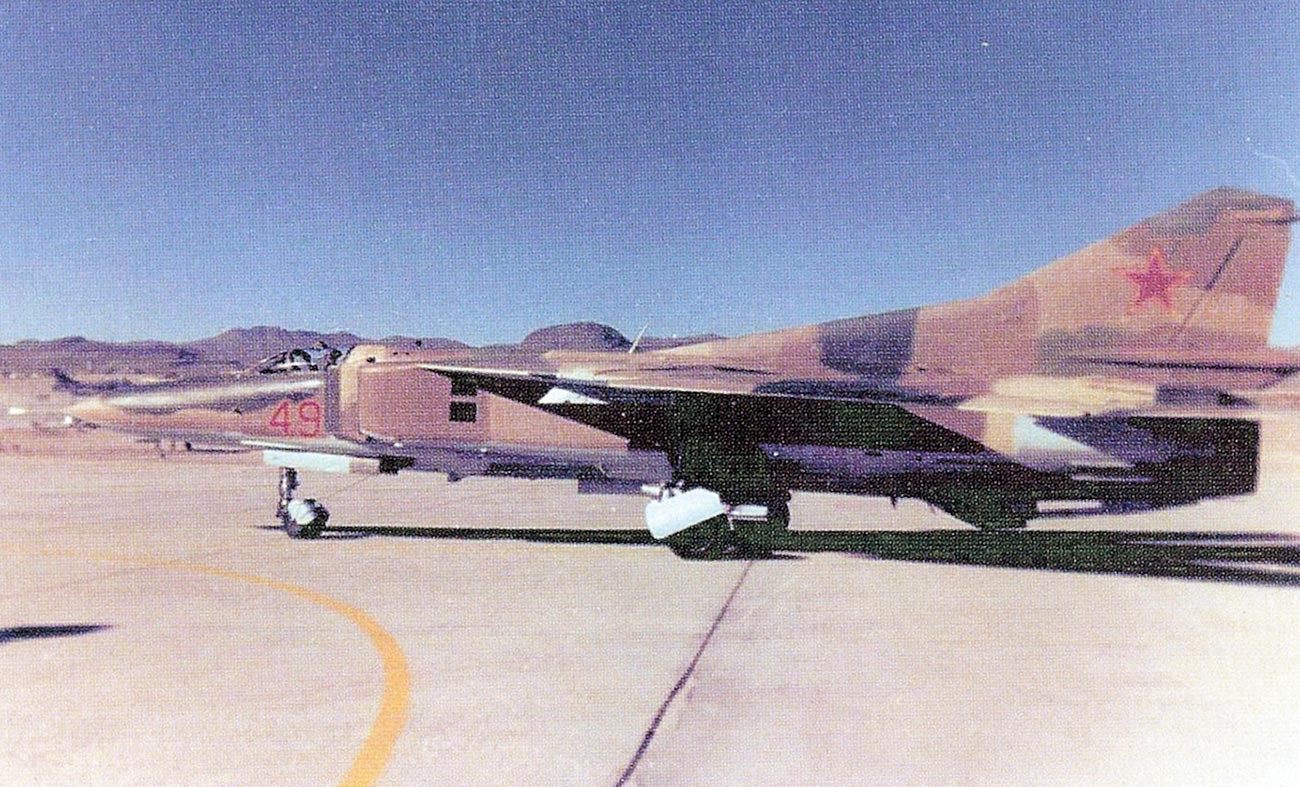 MiG-23 operated by the Red Eagles.

Part of the airspace above the Groom Lake salt flat (where the infamous Area 51 lies), where combat training involving Soviet aircraft took place, was closed off from prying eyes. On maps, it was ironically designated as ‘Red Square’.

Aerial combat training with MiG aircraft of the 4477th Test and Evaluation Squadron was used for the benefit of US Air Force, Navy Aviation and Marine Corps pilots. The Red Eagles were involved in the testing of most American fighter jets in the 1970s and 1980s and took an active part in Red Flag exercises. 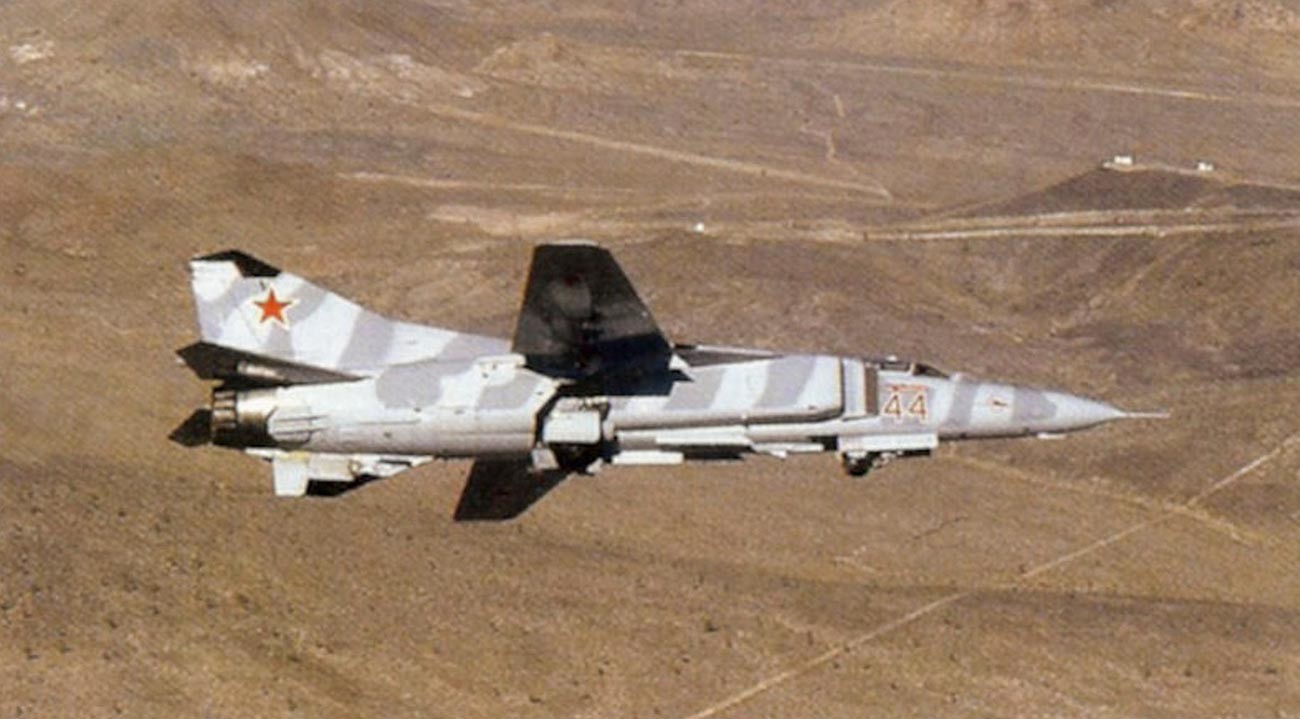 MiG-23MS of the 4477th Test and Evaluation Squadron.

Air battles followed a number of set patterns: one on one, two on two or two American aircraft against one Soviet. In addition, the MiGs “attacked” B-52 strategic bombers and C-130 Hercules transport aircraft, while the latter imitated the landing of troops and cargo.

The Eagles’ task was not to win a victory in battle at any cost, although that, too, happened quite often. The main goal was to demonstrate to their fellow pilots the strengths and weaknesses of the Soviet aircraft, to show how and when it was best to attack a MiG. 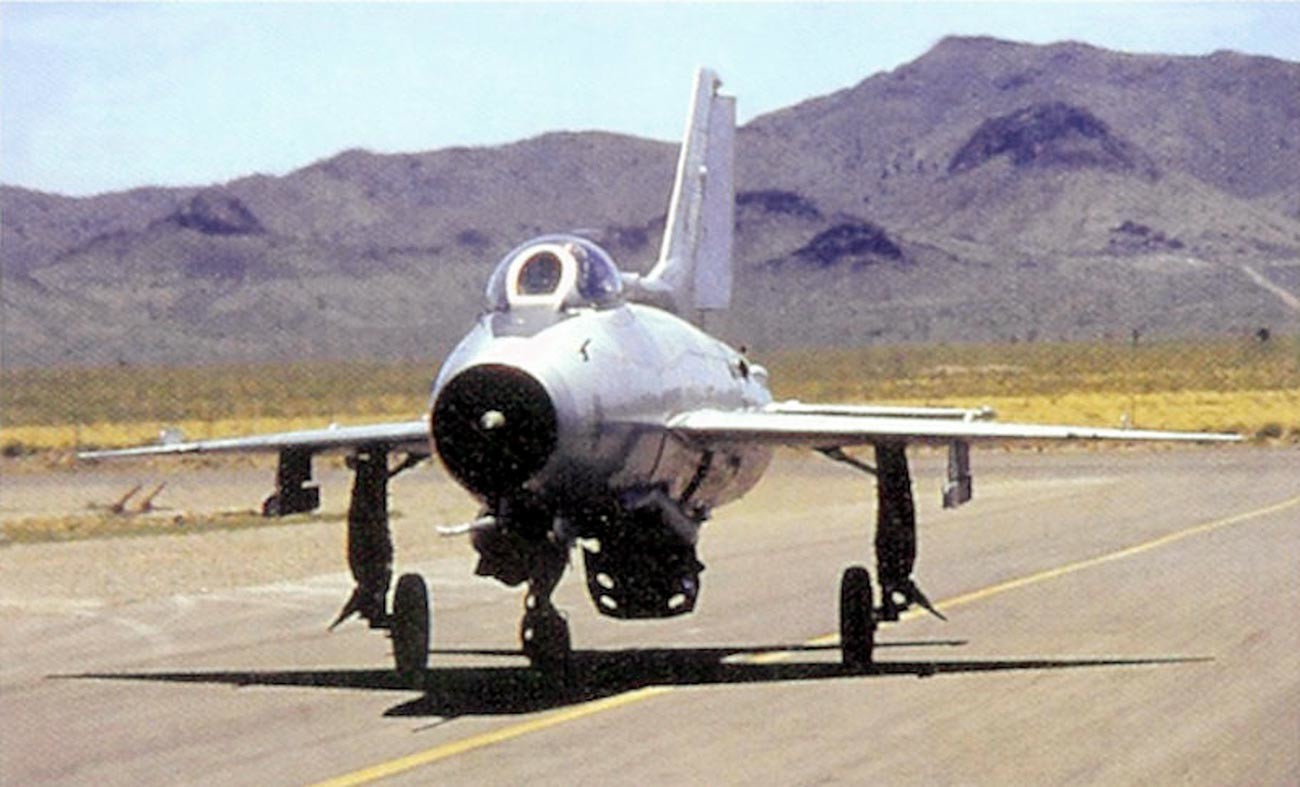 MiG-21 operated by the Red Eagles.

For greater realism, the planes of the 4477th Squadron were decorated with red stars, albeit not with a white edging, as in the Soviet Air Force, but yellow.

Many U.S. trainee pilots, having come up against a potential enemy in aerial combat (albeit a training one), went into shock and stupor. “The first time I saw a MiG-17, I just stopped flying the airplane!” recalled Major Francis ‘Paco’ Geisler: “Instead of using the vertical and speed, I tried to turn with him. He was like gum on my shoe; I couldn’t shake him off. And then I went home and thought, ‘Jeez. That sucked. I feel like a fool.’ It was very humbling, but they told us that it happened to everybody.” 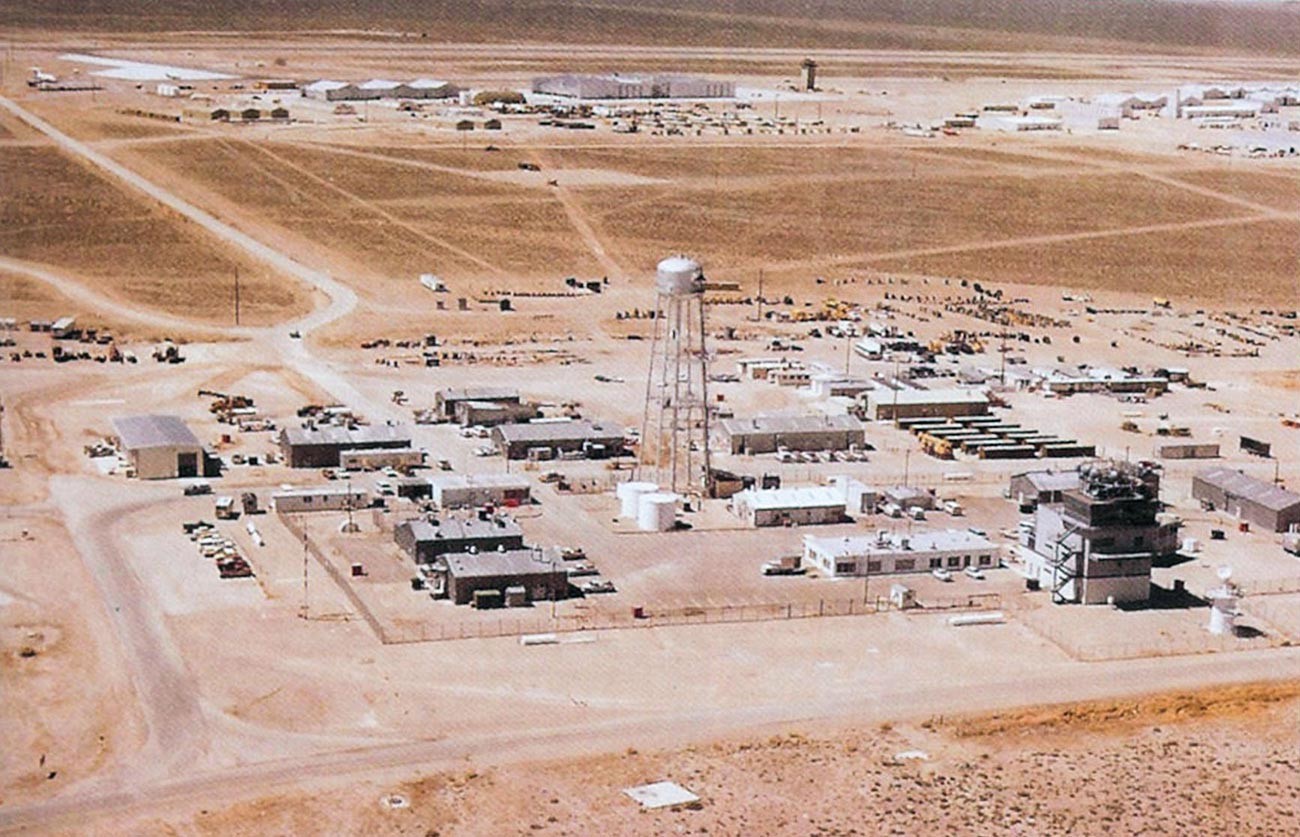 End of an era

By the late 1980s, the Red Eagles began to wind down. The main reasons were the lack of funding, as well as the fact that the Soviet Union had introduced new (fourth) generation fighters.

Pilots of the 4477th Squadron performed their last flights on MiGs on March 4, 1988. Officially, the Red Eagles were disbanded in 1990. Their Soviet aircraft were sent for storage in hangars, became exhibits in museums, or were shot at as targets in Air Force exercises. 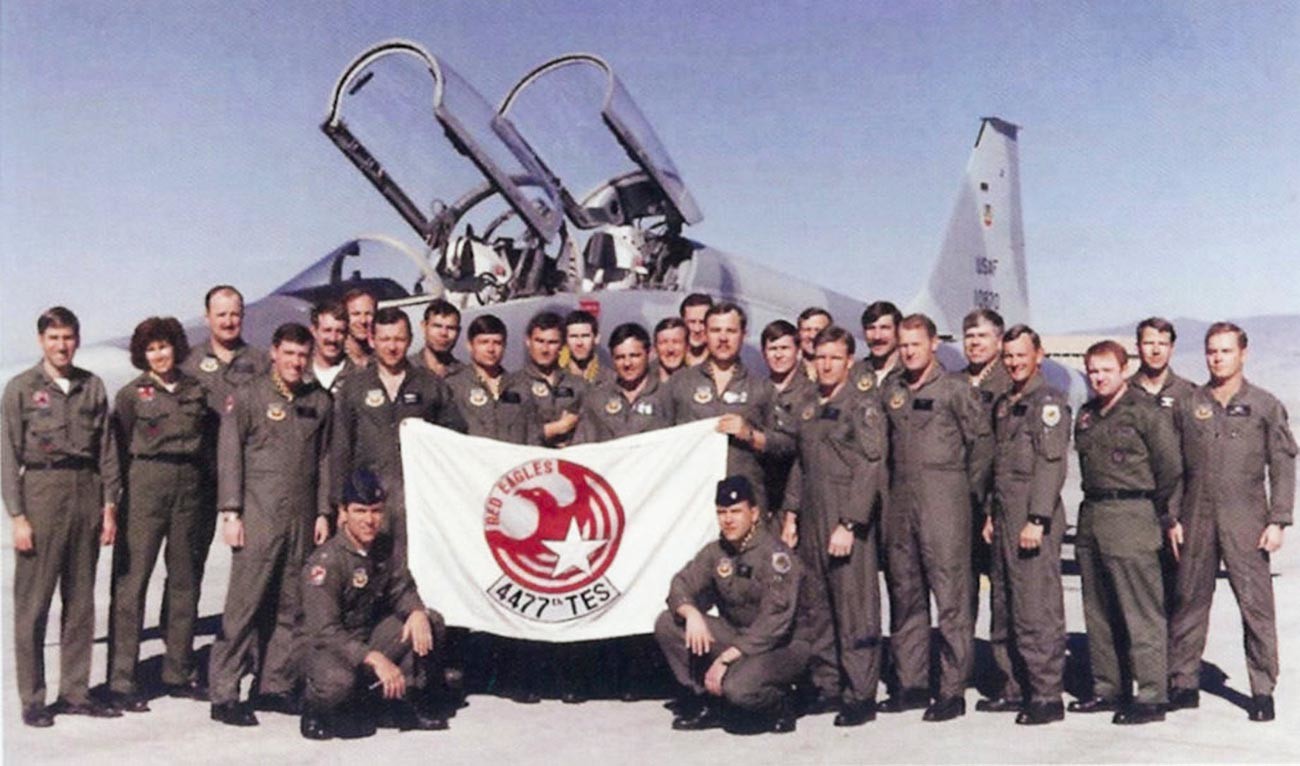 Aerial combat training with the use of Soviet fighters in Nevada became an excellent school for American pilots. “Although it came too late to influence Vietnam, ‘Constant Peg’ training greatly influenced the success of American Airmen in Desert Storm, who shot down 40 Iraqi fighters, many of which were Fishbeds and Floggers,” said General Herbert J. ‘Hawk’ Carlisle, who served as the commander of the 4477th Squadron in 1986-1988.