Red Square through the ages (PHOTOS) 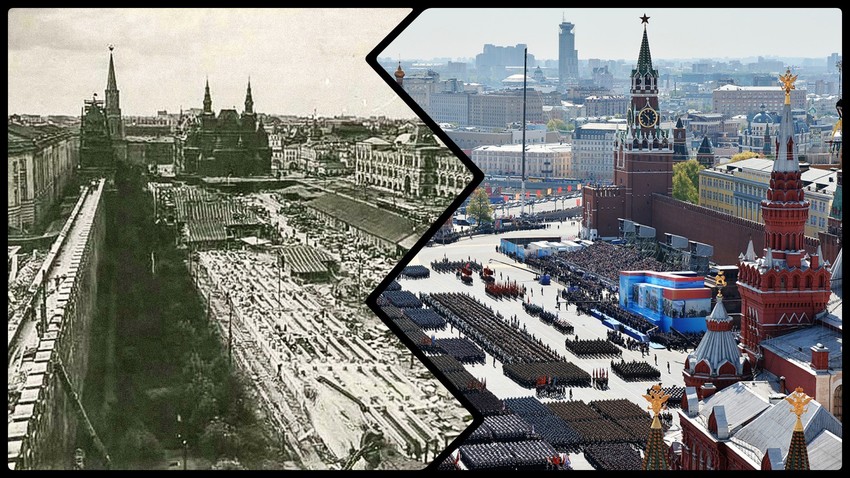 Russia in photo; Getty Images
The main square in Russia, the stage of various political and cultural events – from the 19th century up until today. 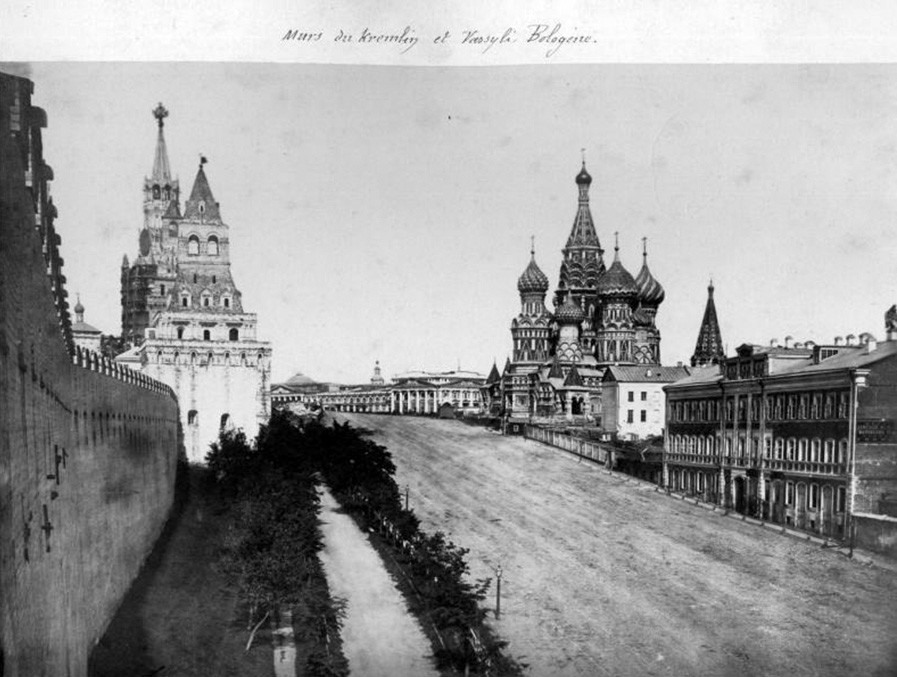 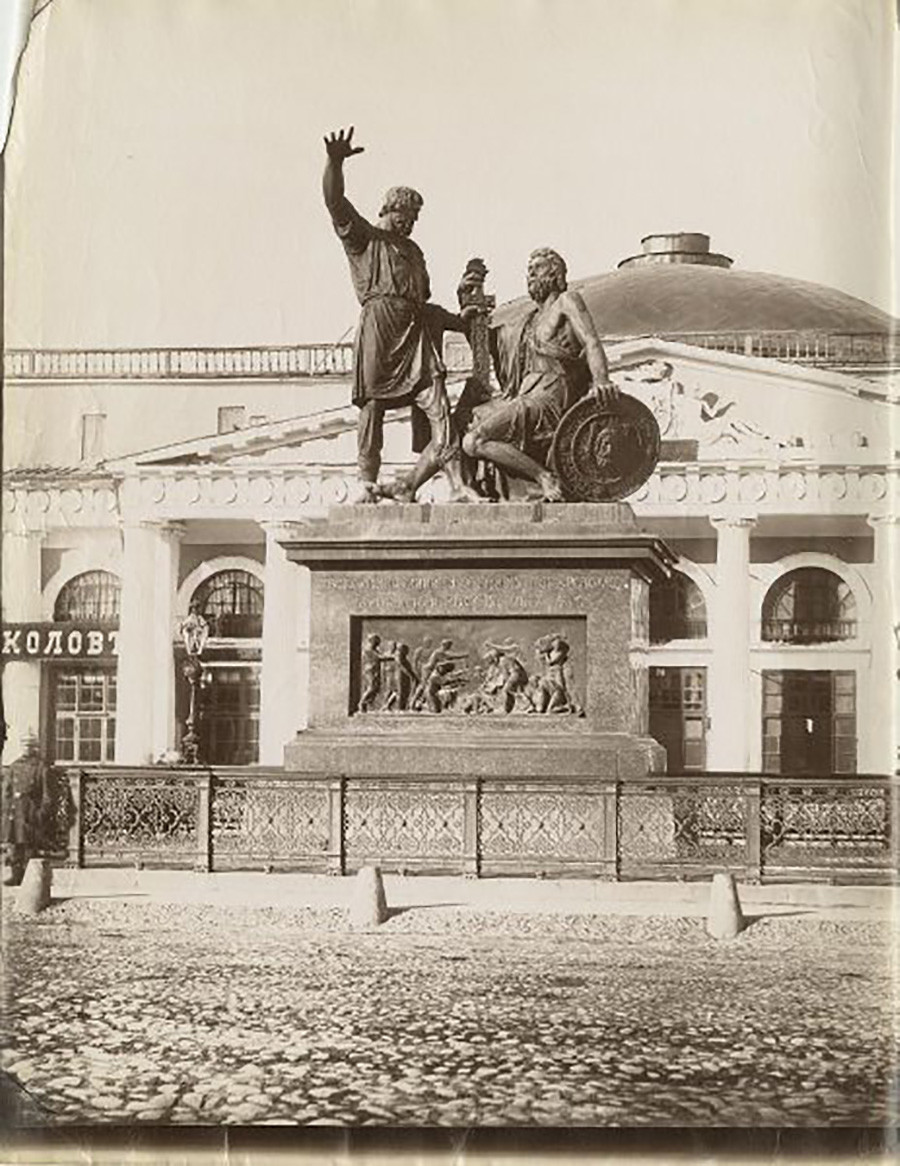 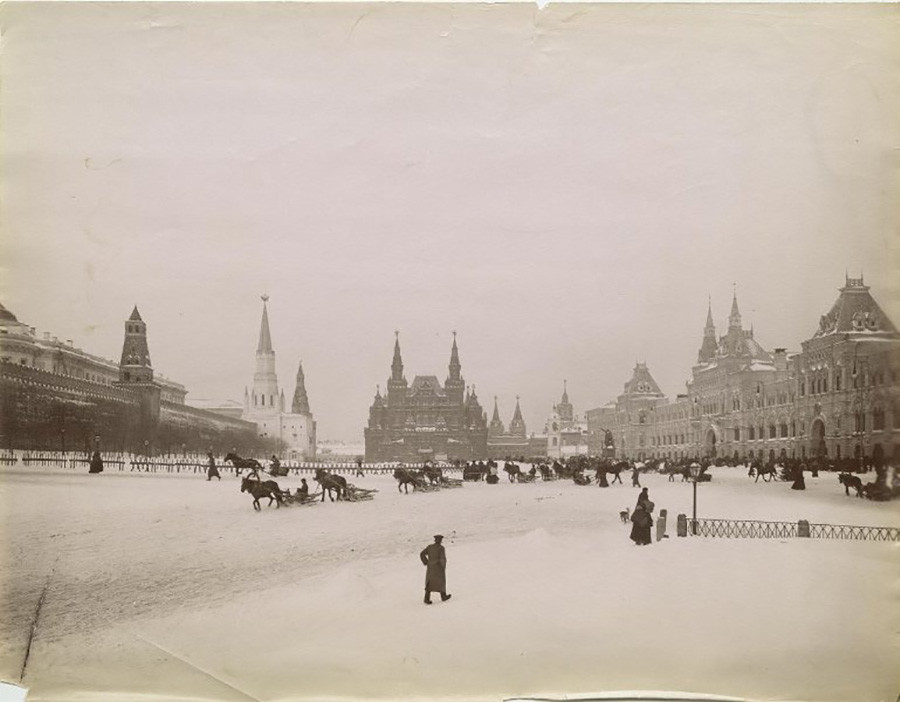 The old Upper Trading Rows were demolished in 1888-1890 and replaced with a new building, later known as GUM (Main Department Store), built in 1892. The square began to look more familiar. As we can see, the square was then open to traffic.

3. A tram line through the square 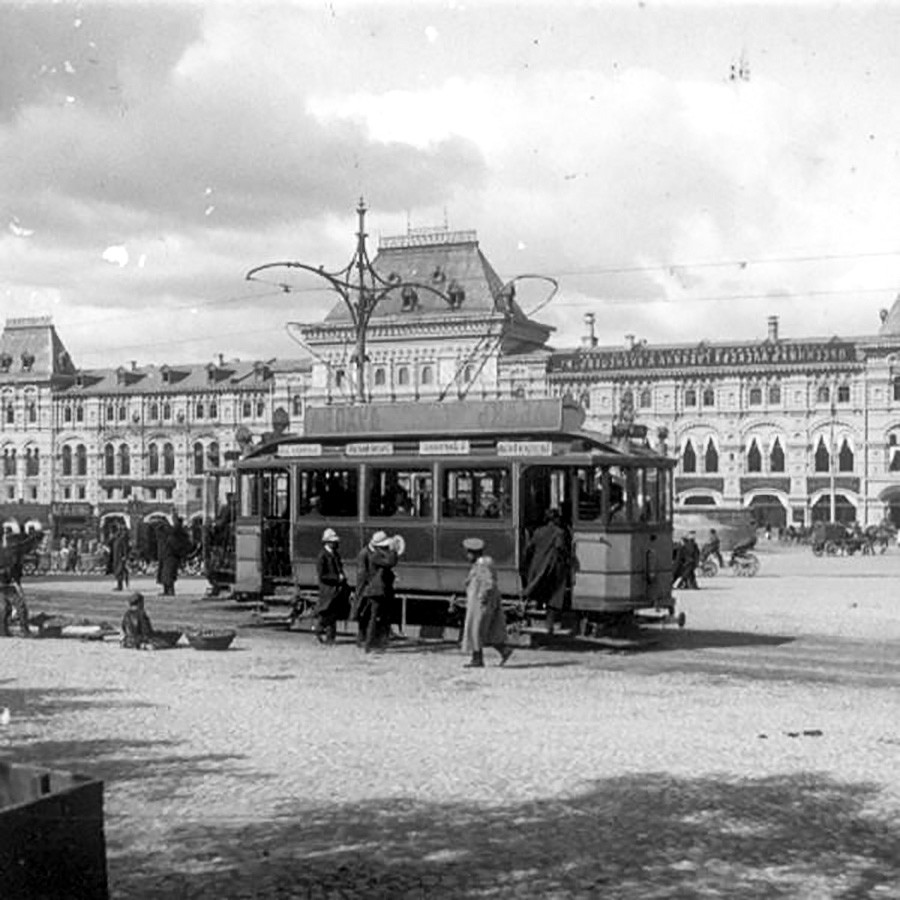 Yes, there was actually a tram running through Red Square! 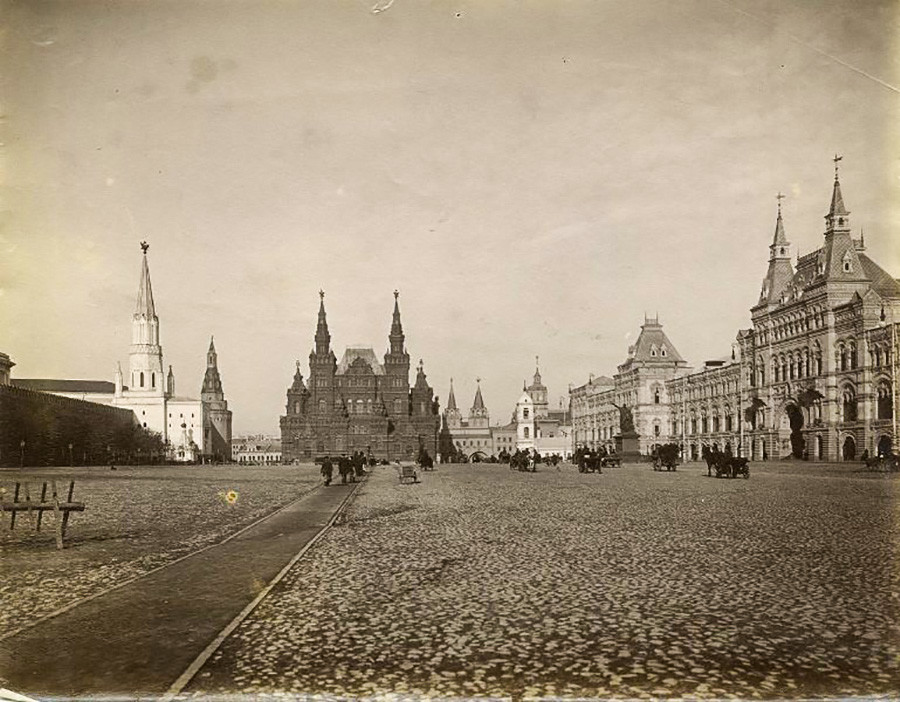 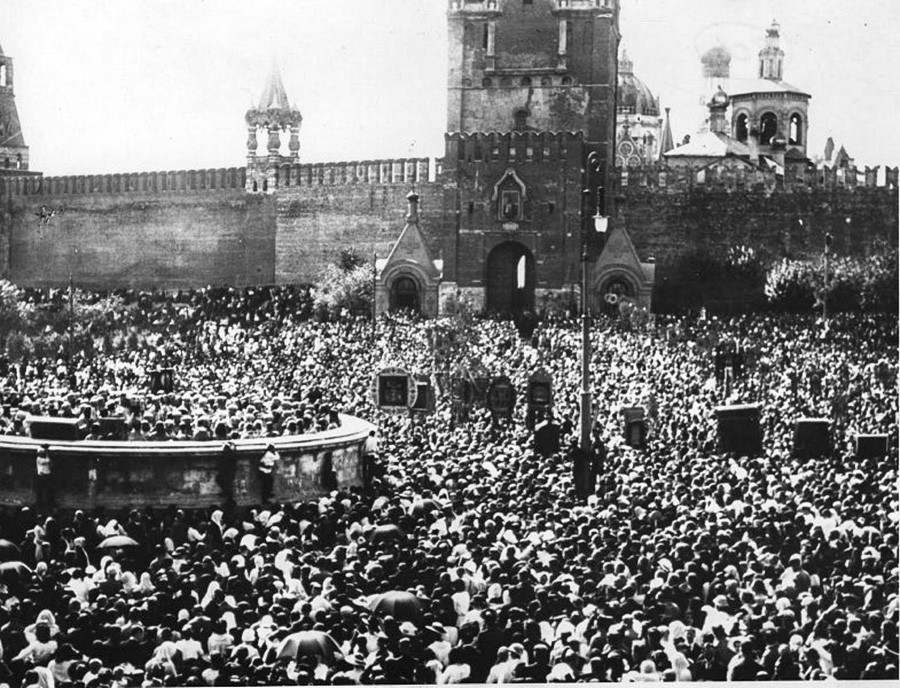 In 1917, Red Square was the scene of mass church services before soldiers left for the front during World War One. 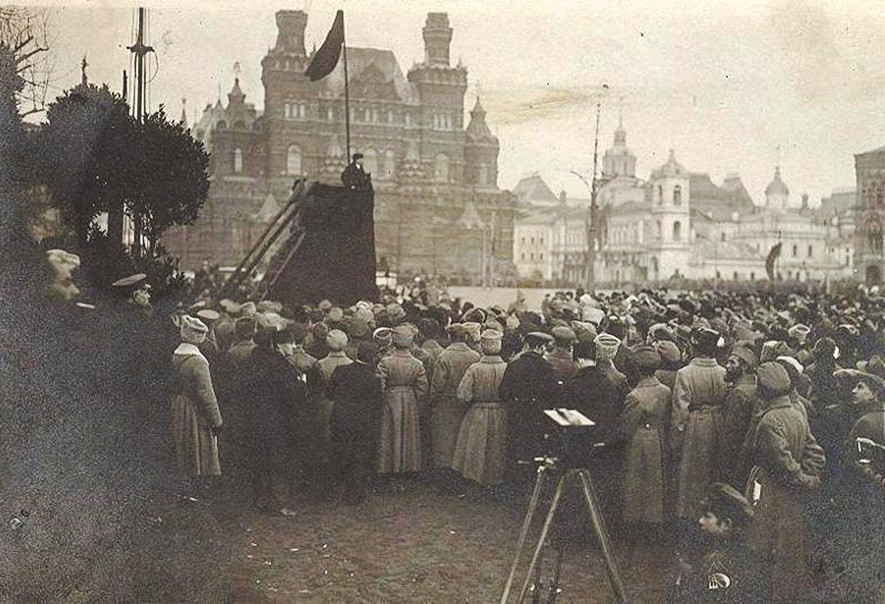 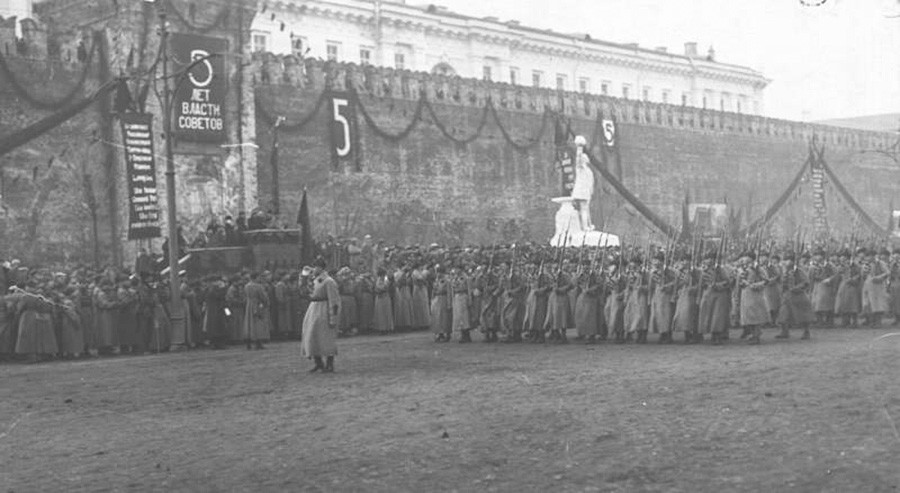 Before Lenin’s death and before the Mausoleum was built, in its place there was a temporary rostrum. To the right of it, a statue of a communist worker was erected.

The statue can be better seen here: 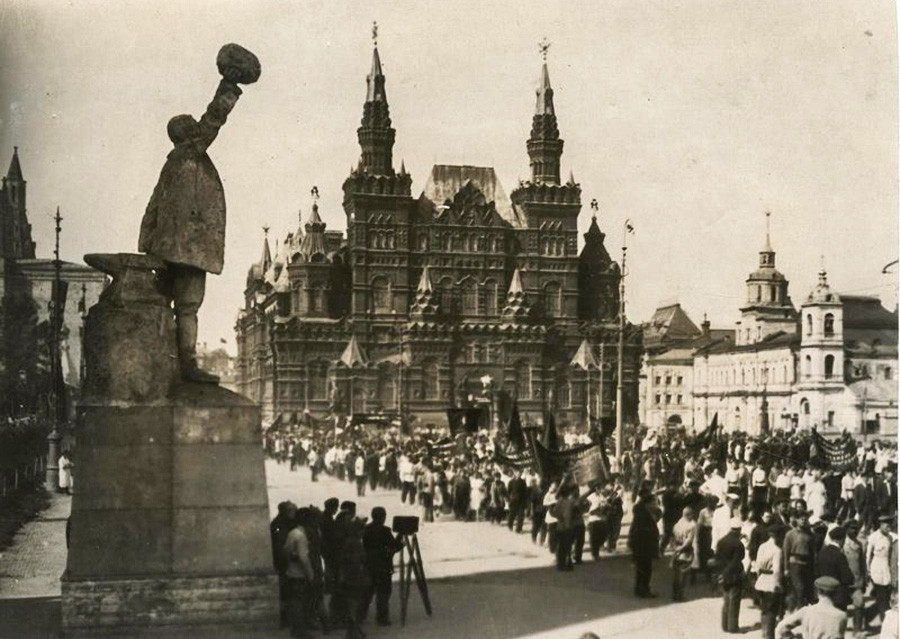 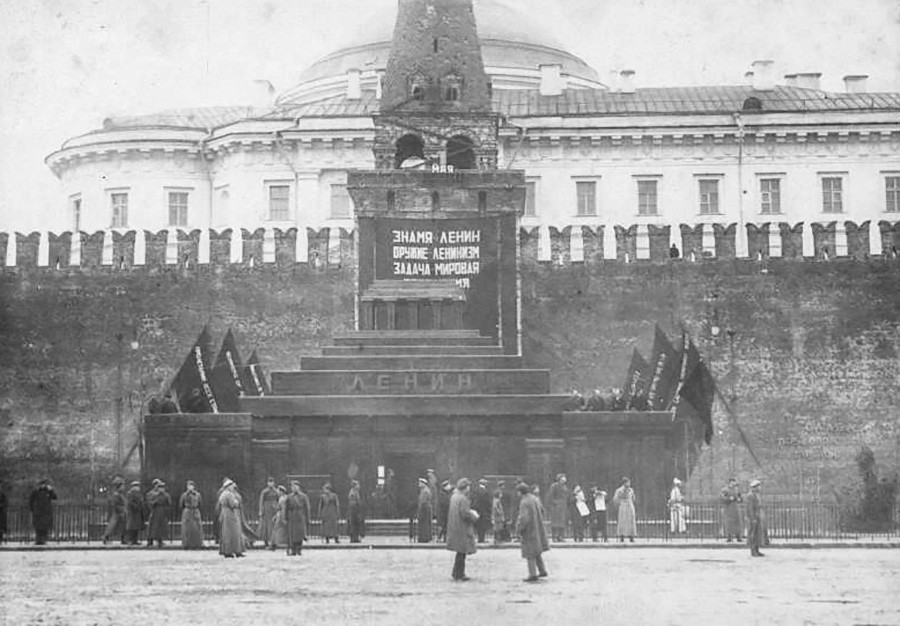 The first, wooden, Mausoleum of Vladimir Lenin was erected shortly after his death in January 1924.

7. Reconstruction of Red Square under Stalin 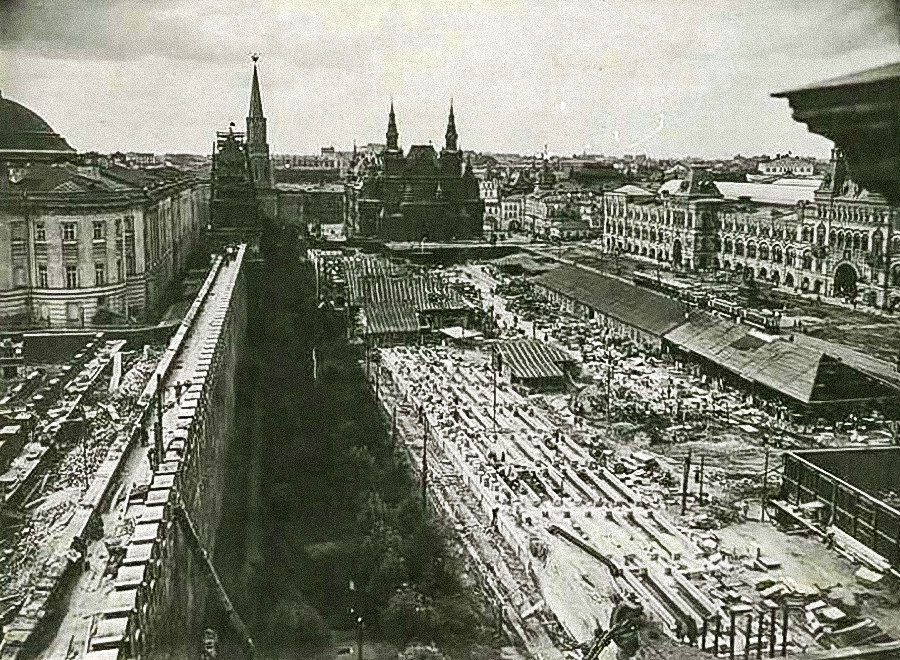 In the 1930s, Red Square underwent renovation. By 1930, the new, granite Lenin’s Mausoleum was constructed, and stone rostrums were built to the right and left of it. 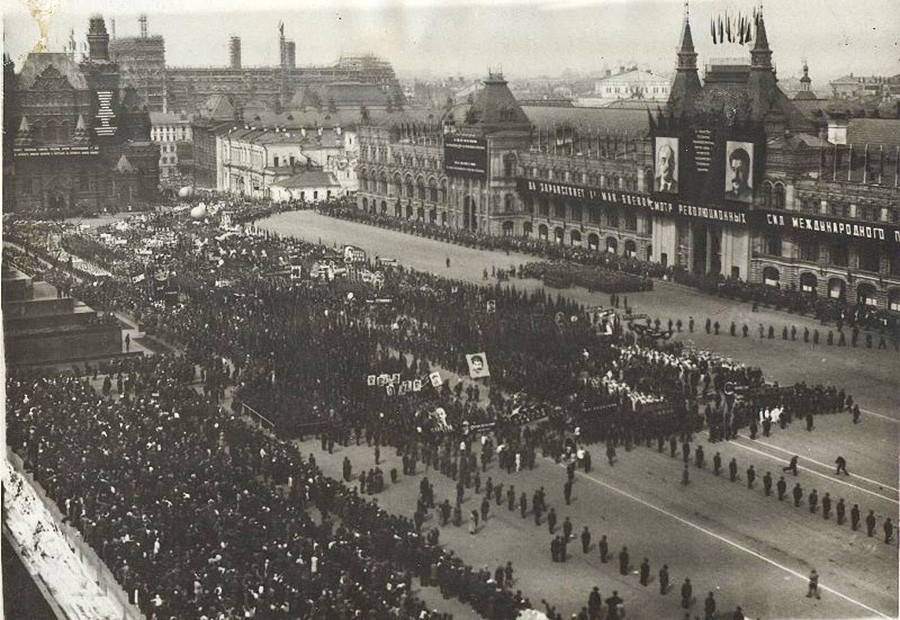 Iversky Gate (to the right of the State Historical Museum building) was demolished, and the monument to Minin and Pozharsky moved to St. Basil’s Cathedral. 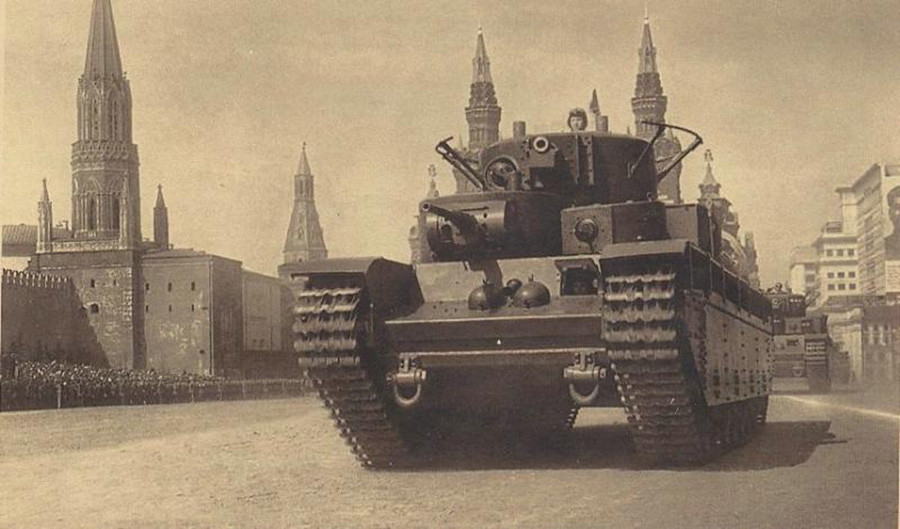 After the gate was demolished, the square became accessible to heavy machinery during military parades. 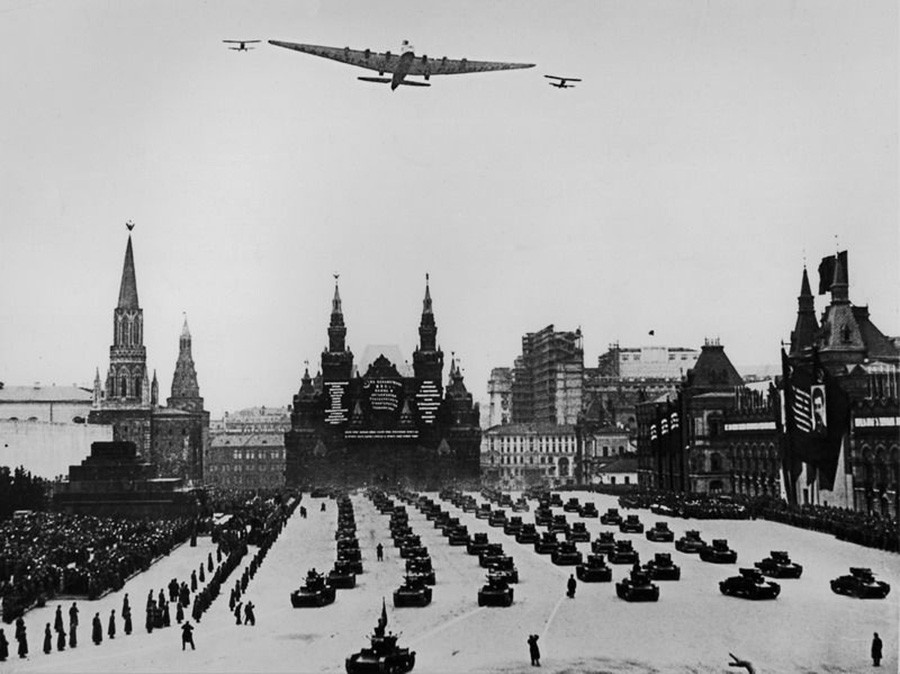 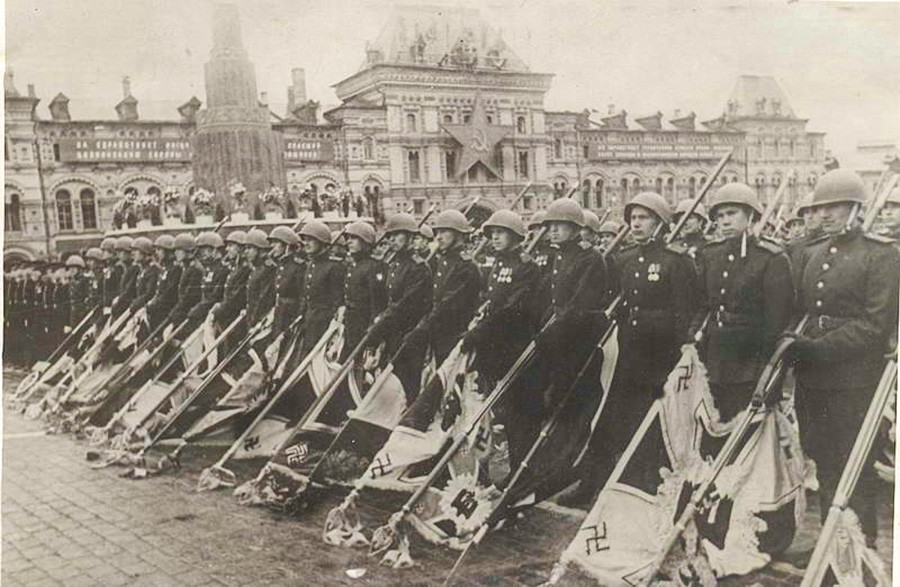 On June 24th, 1945, the first Victory Parade was held on Red Square. Nazi banners were tossed to the ground by victorious Red Army soldiers.

Stalin’s funeral procession, with the coffin placed on a gun carriage, went through Red Square, and Stalin’s body was placed in the Mausoleum next to Lenin. 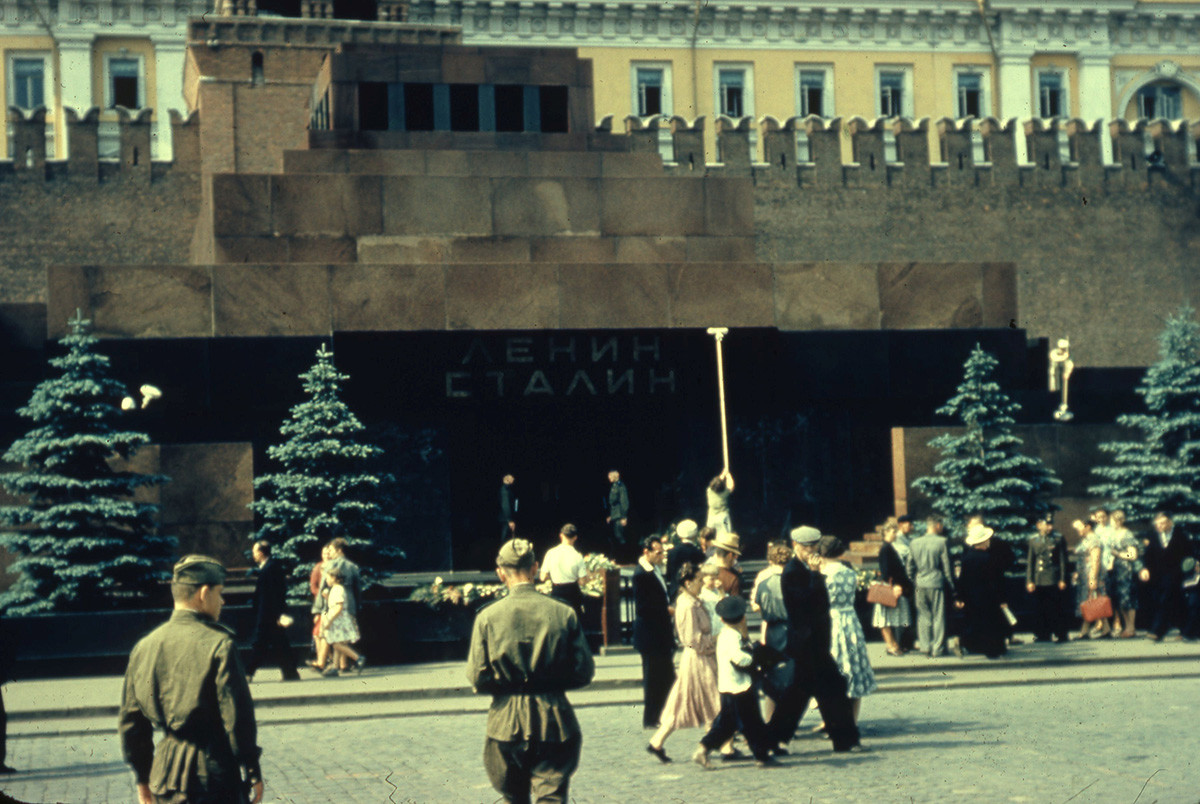 The Mausoleum with inscriptions 'LENIN' and 'STALIN'

The Mausoleum bore the names of both Lenin and Stalin for several years until 1961, when Stalin’s body was removed and reburied near the Kremlin wall. 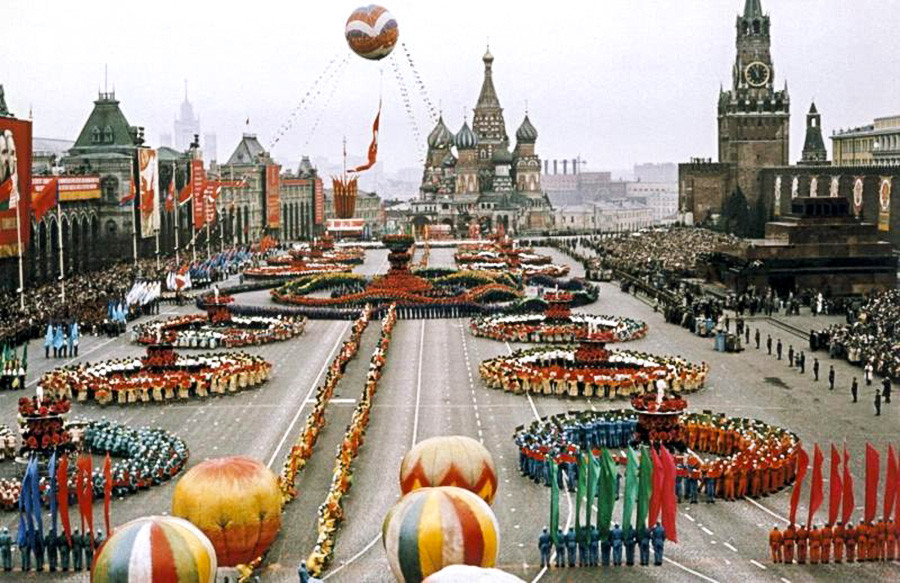 While on other days it attracted tourists from all over the USSR. 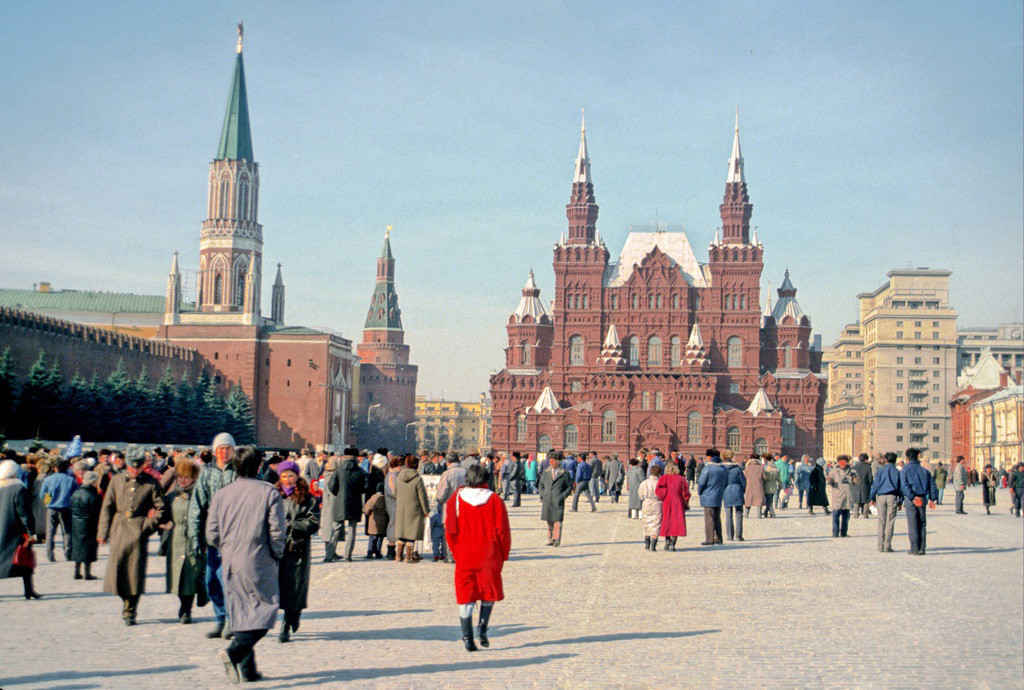 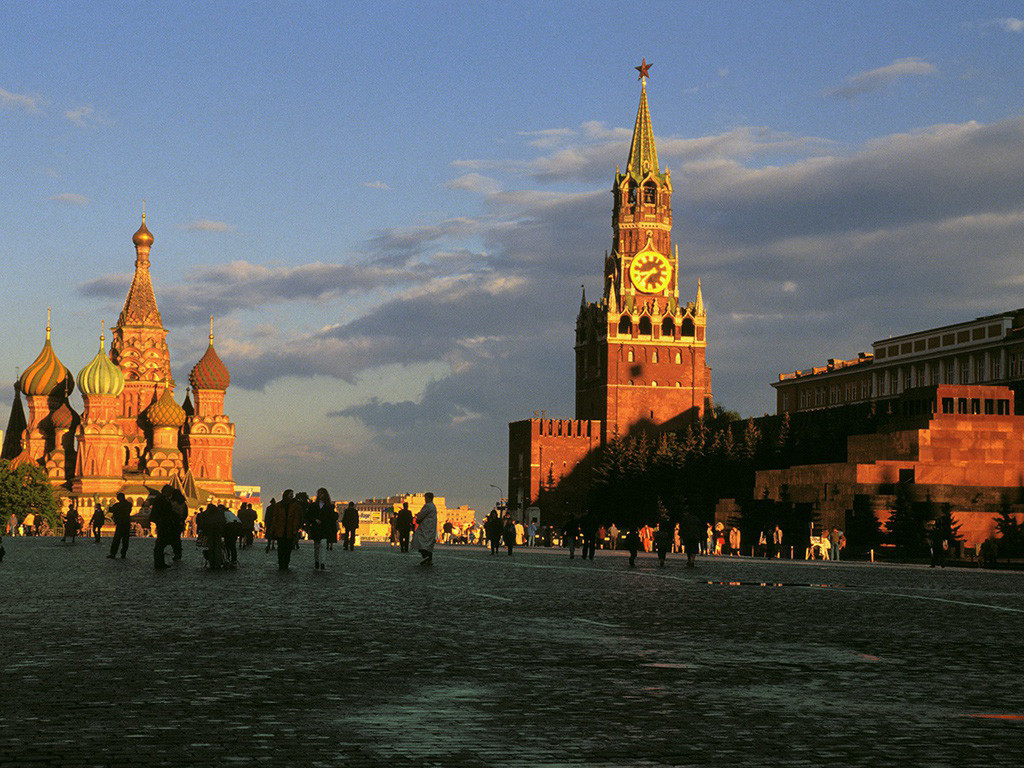 In years after 1991, Red Square has seen quite different events from Soviet times – like shows by Red Hot Chili Peppers (1994) and Paul McCartney (2003). 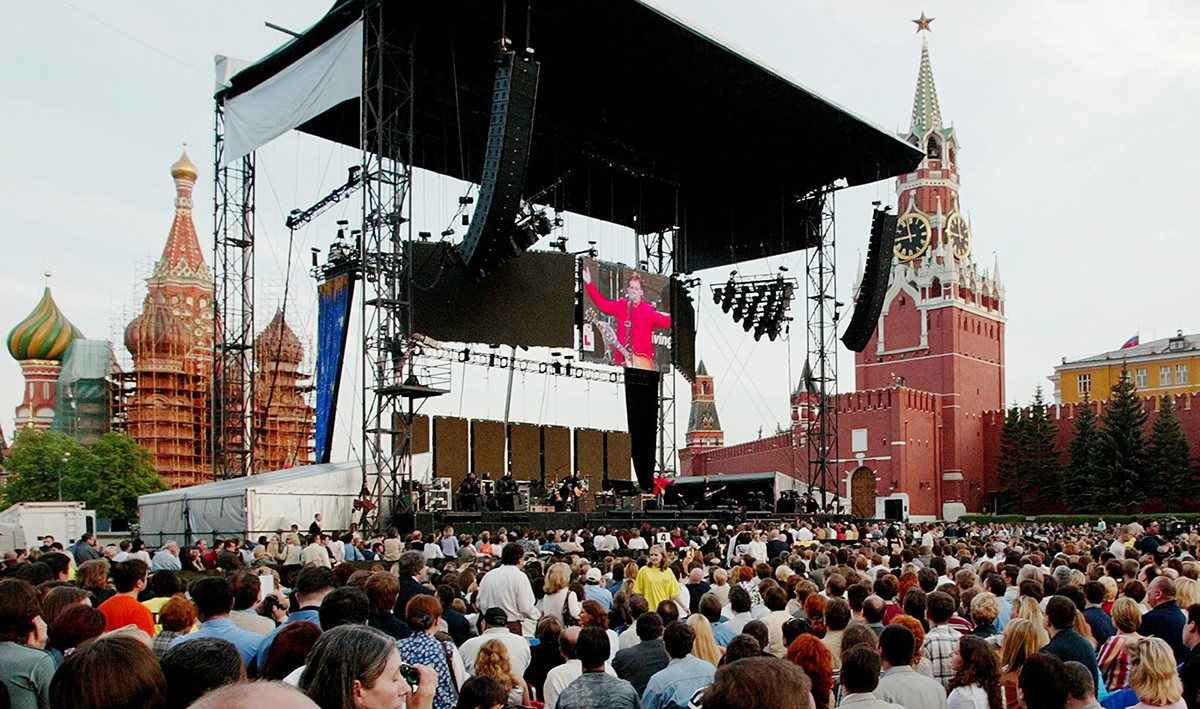 Paul McCartney at the Red Square 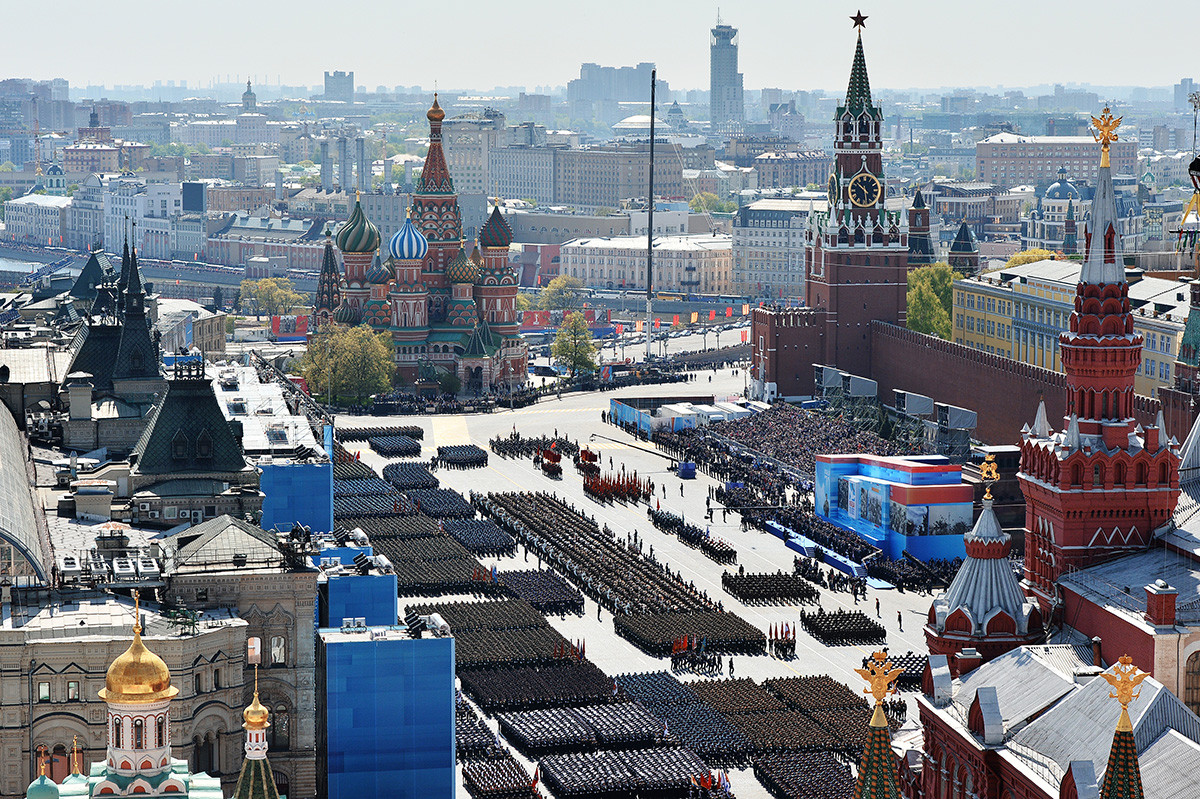 Iversky Gate was restored in 1995 in its original form. 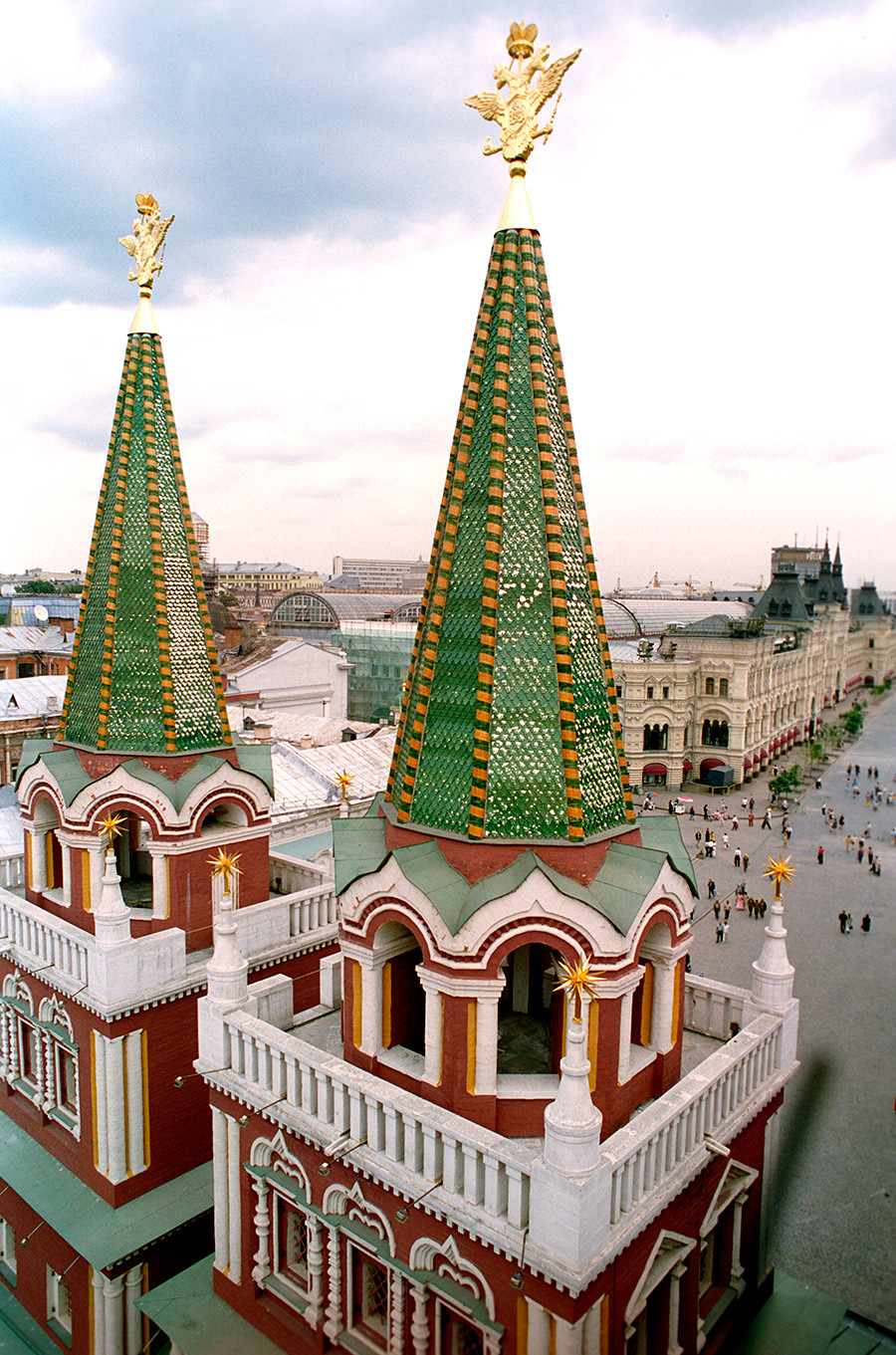