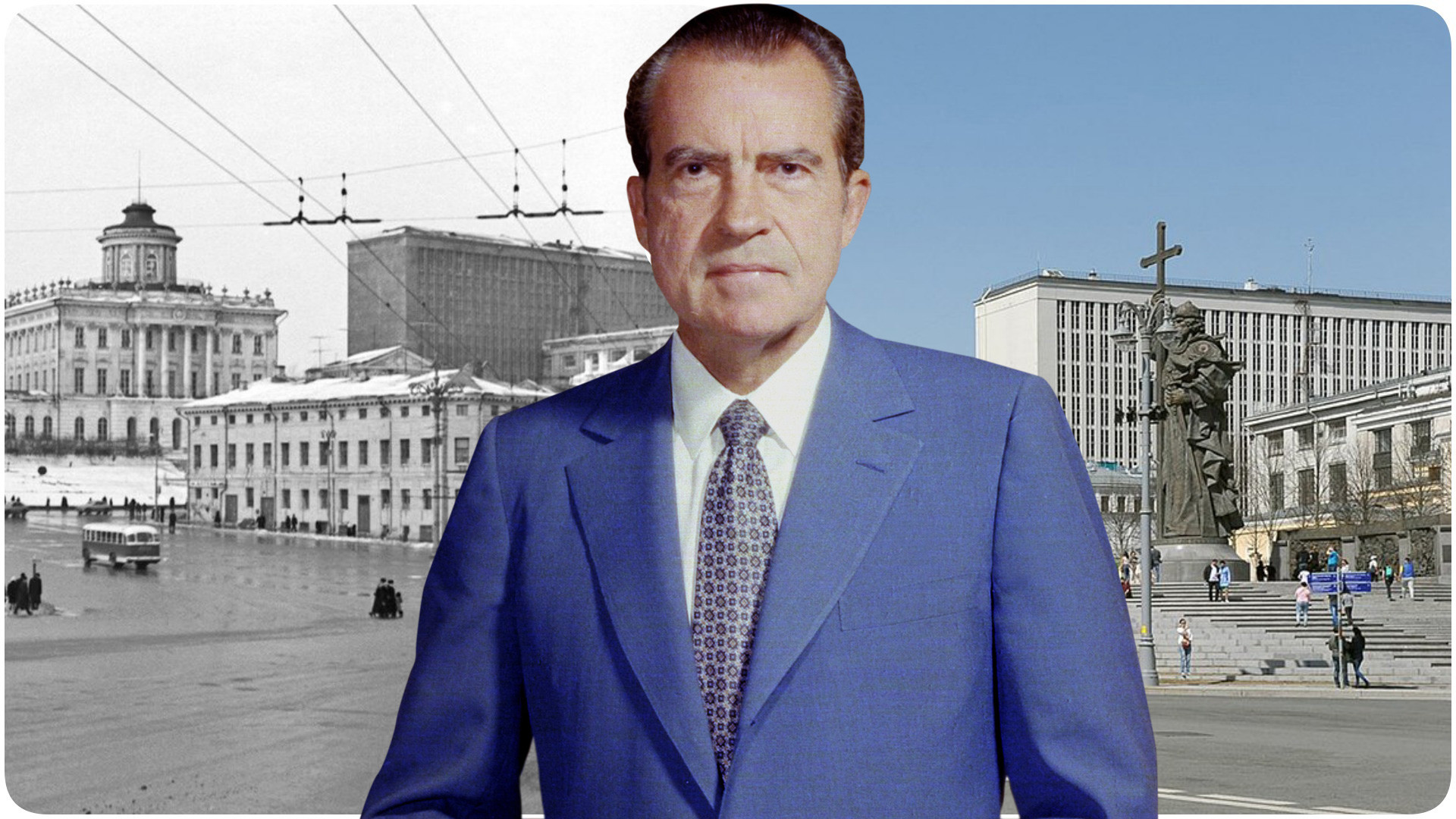 Archive photo; Getty Images; Mos.ru
Here’s the unknown story of how an official state visit by the American leader resulted in to the merciless destruction of an entire historical residential district near the Kremlin.

The history of urban development in Moscow in the 20th century was always, in one way or another, a result of political decisions. One such example is the story of the redevelopment of a district in close proximity to the Kremlin, not far from the Cathedral of Christ the Saviour.

Residential area by the Kremlin

In the early 1930s, after the Cathedral of Christ the Saviour had been blown up by the Bolsheviks, the capital city’s administration also demolished several residential buildings on adjoining streets: Prechistenka, Ostozhenka, Znamenka and Volkhonka. Under the 1935 Master Plan for the Reconstruction of Moscow approved by Joseph Stalin, an Avenue of the Palace of the Soviets was to be laid out there. The wasteland in front of the splendid Pashkov House resulting from the demolitions was given the name Borovitsky Gate Square. A small adjacent district of two- and four-storey buildings miraculously survived then - you can see them in postwar photographs of the area. 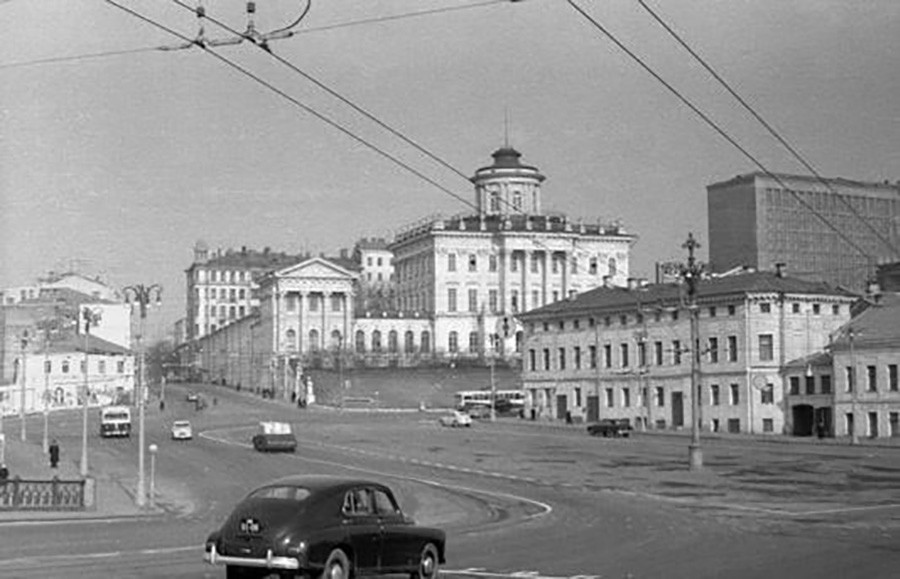 These few houses were the last surviving residential buildings in the immediate vicinity of the Kremlin. The following circumstances eventually led to their demolition.

On May 22, 1972, Richard Nixon, the 37th U.S. president, was due to arrive in Moscow on an official visit. His motorcade was to proceed from Vnukovo Airport outside Moscow and then, from Bolshoy Kamenny Bridge, to turn straight into the Kremlin. Nixon and his aides were to stay in apartments within the precincts of the Kremlin for the whole duration of their nine-day visit. 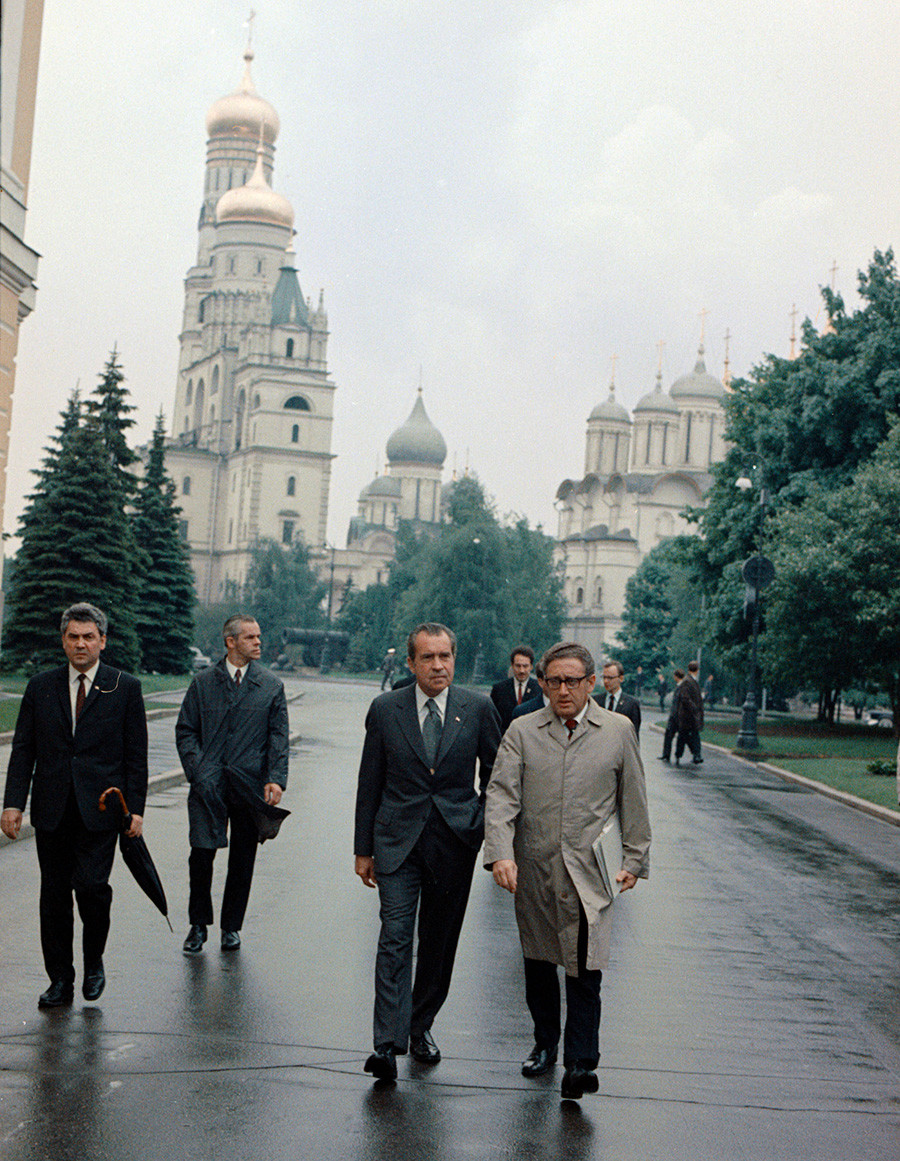 It was the first time in many years that Moscow was preparing for a visit by an American leader, and the arms race of the early 1970s also entailed rivalry in civilian spheres, including urban planning and construction. The Moscow city authorities and Leonid Brezhnev, the General Secretary of the Central Committee of the Communist Party of the Soviet Union [CPSU], personally issued orders to "upgrade" the streets along the proposed route of Richard Nixon's motorcade. The victims of these ad hoc improvements were several pre-revolutionary buildings and, in particular, mansions on Bolshaya Yakimanka Street and near the Tretyakov Gallery in the center of Moscow.

In the immediate vicinity of the Kremlin, a two-storey 18th-century building on Prechistensky Gate Square, as well as a residential area between Znamenka and Manezhnaya streets, fell into the claws of the demolition experts. 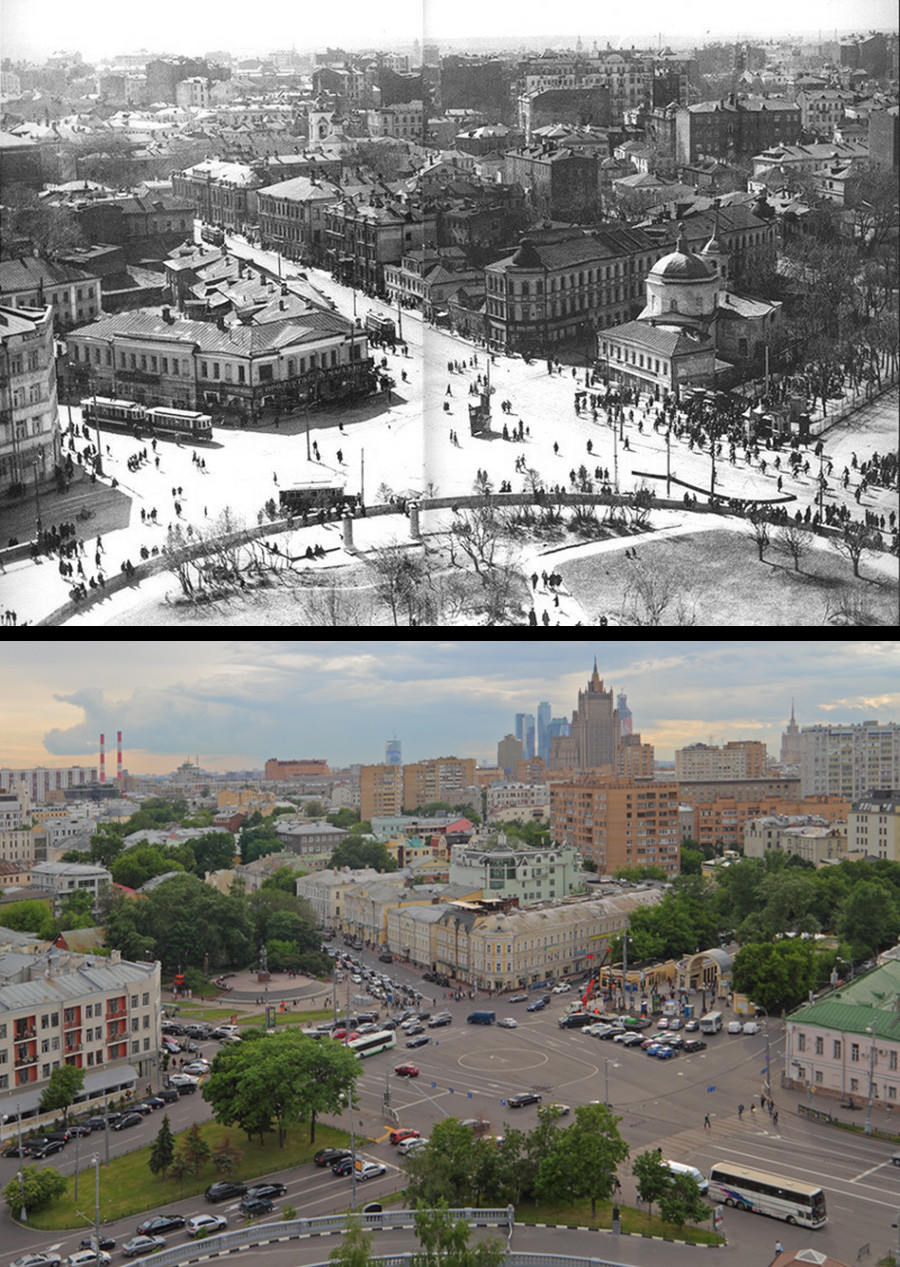 Prechistensky Gate Square before and after

And to ensure that the American guest had a panoramic view of Pashkov House when his motorcade exited from Bolshoy Kamenny Bridge, workers needed just a matter of days to demolish all the other remaining residential buildings near the Kremlin and lay out a garden square that became informally known as "Nixon Square". 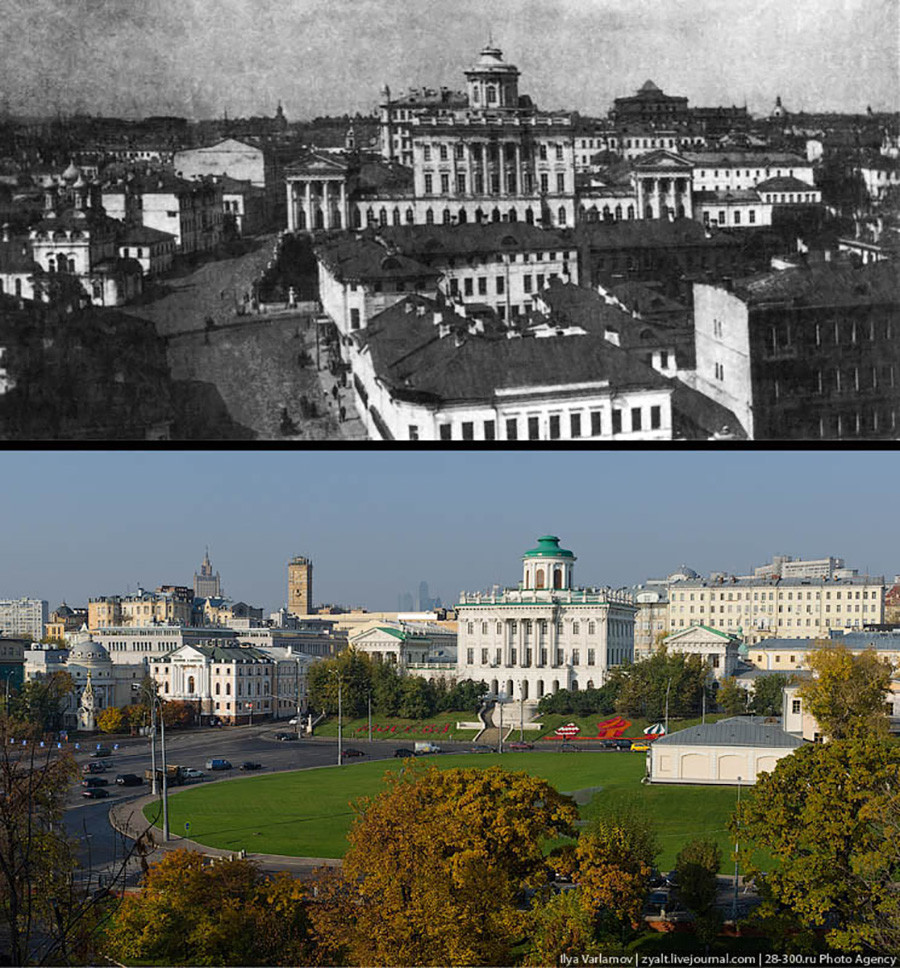 "Nixon Square" before and after

For 45 years the garden square remained the most undeveloped and functionless place in the historic center of Moscow. Under Mayor Yury Luzhkov, there were plans to build a depository and exhibition space for the Moscow Kremlin Museums, but that never materialized.

Interestingly, the next transformation of the bare tract of land also had a political dimension. In 2016, at the initiative of President Vladimir Putin, a monument to Saint Prince Vladimir the Great was erected in Borovitskaya Square. 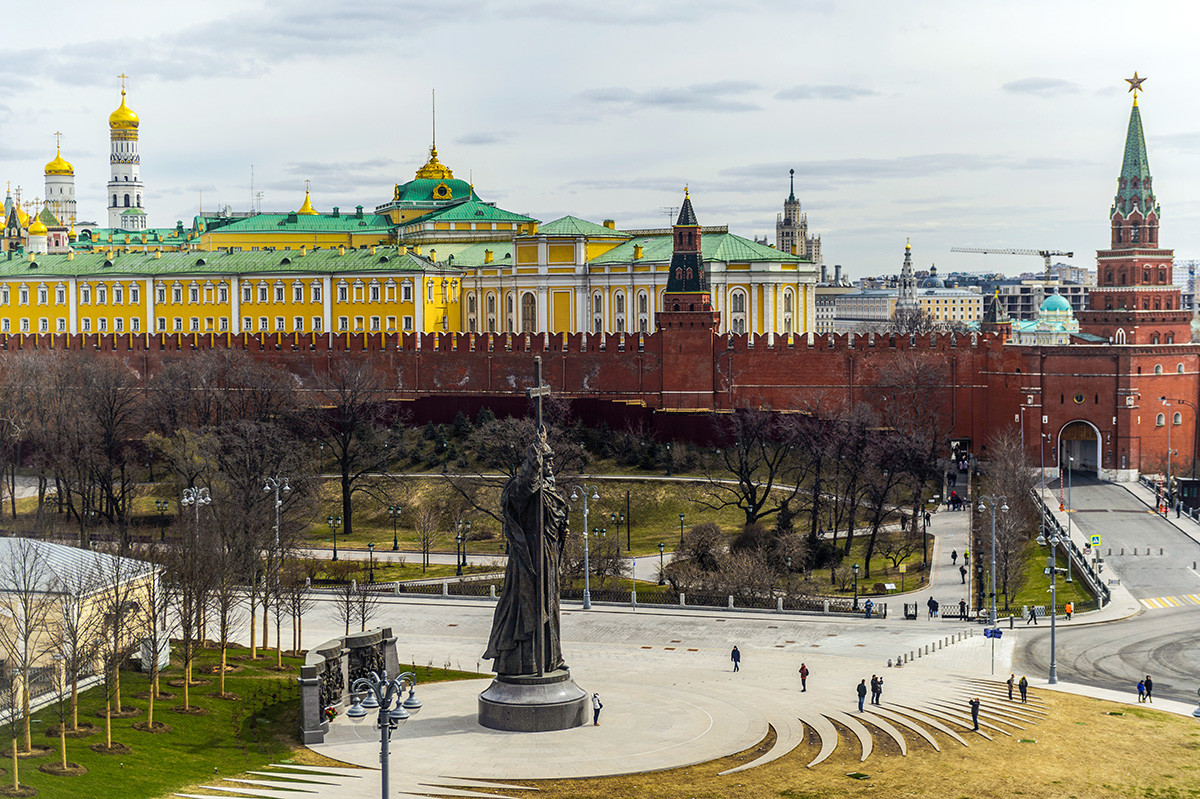 View of the statue of Saint Prince Vladimir on Borovitskaya Square and the Moscow Kremlin, 2017

The controversy surrounding the monument by sculptor Salavat Shcherbakov provoked one of the most heated urban planning disputes of the 2010s.