Culture
Olga Mamaeva
The first penthouses and open spaces in the world designed by the architect were built in Moscow.

In October the world began celebrating the 130th birthday anniversary of Le Corbusier (1887-1965), arguably the most important and influential architect of the 20th century. In his time, this great urban planner determined a significant part of the future of world architecture. His followers worked throughout the world, developing the famous Five Points of Architecture: the necessary presence of supporting columns, a flat roof, horizontal windows, a plain façade and a freely-designed ground plan.

The USSR, which hosted the architect three times, implemented only one of his building designs – the Tsentrosoyuz (Central Union) Building. However, the ideas of the Frenchman with Swiss origins were widely popular among Soviet modernist architects. Russia Beyond remembers their most vivid constructions in the Soviet Union. 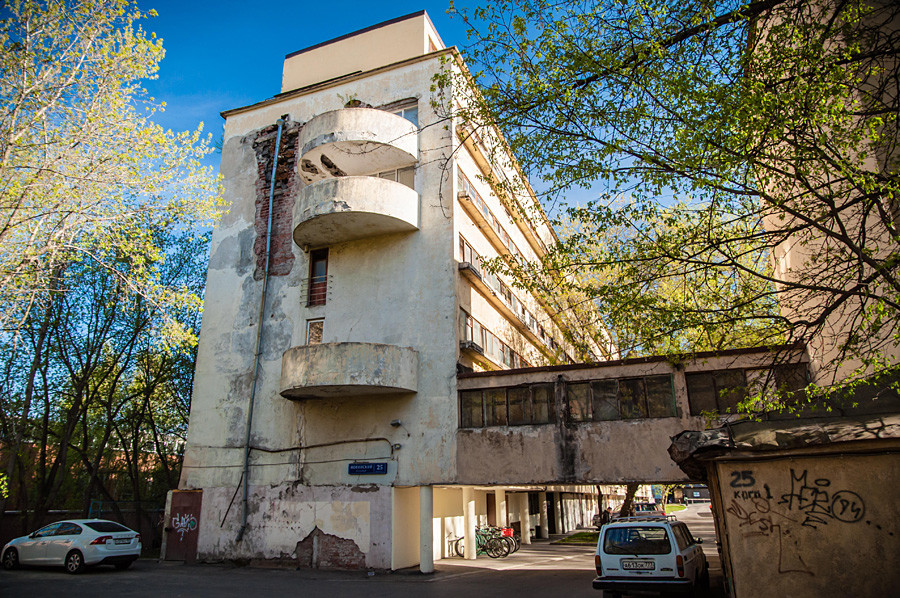 is the most famous monument of Soviet Constructivism in the capital. The communal house designed by architects Moisei Ginzburg and Ignaty Milinis was built between 1928 and 1930 for employees of the People’s Finance Commissariat (Ministry). The construction was overseen by Finance Commissar Nikolai Milyutin, for whom the first penthouse in the world was erected on the building’s roof. Architects called the project a building of a transitional since it symbolized the transition from the traditional way of life to a new, socialized existence. Three kinds of apartments or “living cubicles” were planned for the residential block. On the bottom there were the two-tiered, three-room apartments with a surface area of 60 sq. m. with a kitchen and a toilet (cubicle K), which used for traditional family habitation. Above were experimental cubicles for two people — dual, two-tiered apartments (2F) with a surface area of almost 30 sq. m. Most of the cubicles in the building have a small surface area of 15 sq. m. (F), and are designed for only one person. A separate communal block was built for the residents of these cubicles. It contained essential household services such as a laundry room, a and a library. 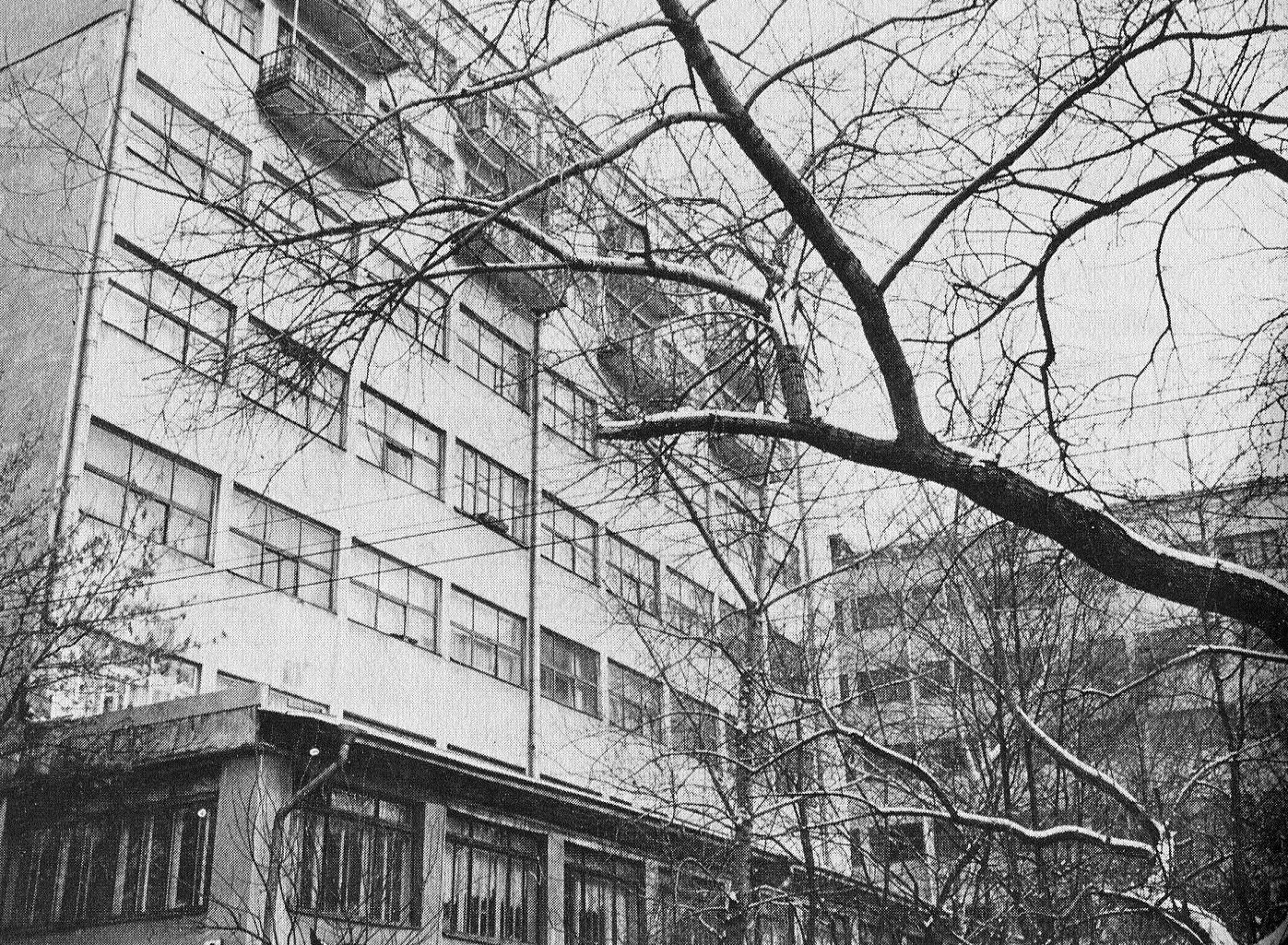 The Demonstrative Construction complex for construction workers also combined features of the old and new ways of life, the so-called “machines for living.” The building was designed by the architects who had conceived the Narkomfin Building in the same period. The complex consists of two residential buildings intended for both individual and family habitation and a two-story communal block for socialization.

3. Communal House of the Textile Institute 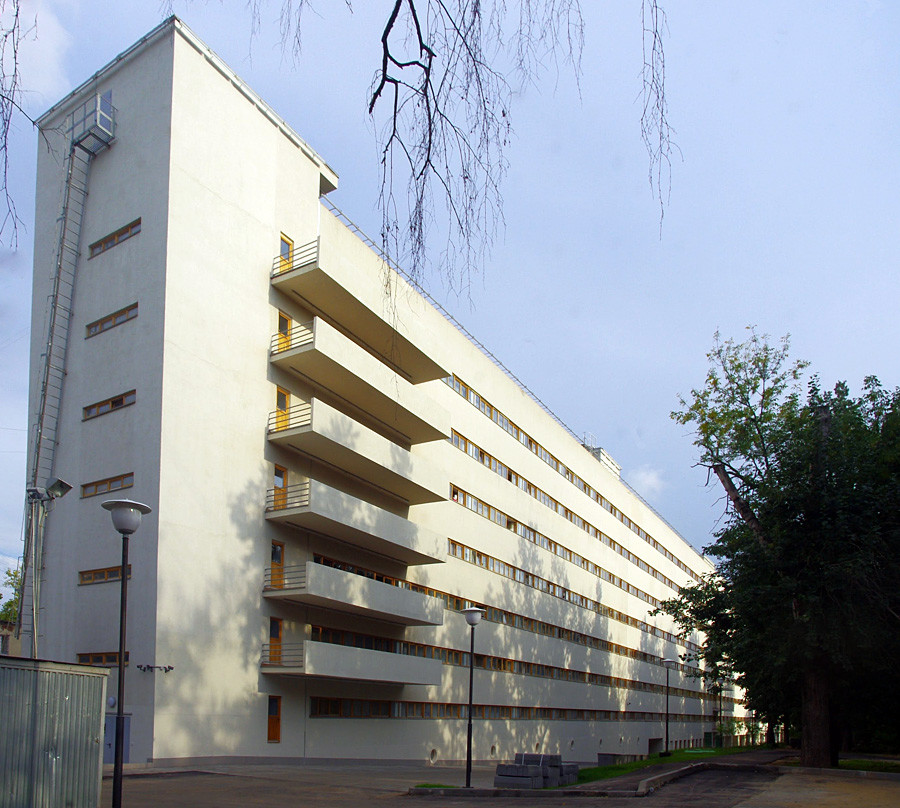 Communal House of the Textile Institute.

In 1929 emerging architect Ivan Nikolaev planned the Communal House of the Textile Institute in accordance with Le Corbusier’s ideas. Two thousand people were supposed to live and study in this building following a very rigid order. The building has the shape of the letter H. Six-meter-square cabins served as bedrooms, plus there were student shower rooms, a cafeteria and finally a study area. At the end of the the building’s interior was partially restructured and given over to the Institute of Steel and Alloys as a dormitory.

Corbusier’s only structure in the USSR was finished in when modernist architecture was accused of formalism and became unfashionable. The plan for the building that was being constructed for the Central Union of Consumer Cooperatives was chosen in an open competition, in which not only the best Soviet architects but also the stars of European architecture participated, including Peter Behrens, Max Taut, London’s Vernet & Tate Studio and Le Corbusier himself. The co-authors were his cousin Pierre Jeanneret and Soviet architect Nikolai Kolli, who had worked for two years in Le Corbusier’s studio in Paris. He was the one who supervised the construction process.

The complex was built in accordance with Le Corbusier’s five rules. Ramps instead of stairs became the project’s most prominent feature. They were set up throughout the structure. Furthermore, the first open space offices were installed in the building. When completed, it was the largest office administrative building in Europe. 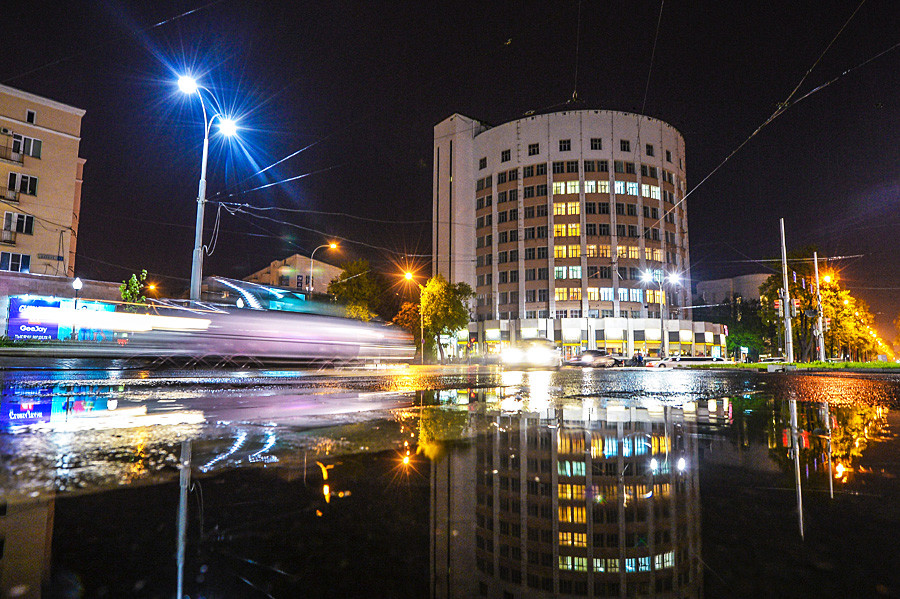 complex was built between 1929 and 1936 according to a design by architects Ivan Antonov, Benjamin Sokolov and Arseny Tumbasov as a small dormitory for young state security employees. The complex consists of 14 buildings of various height. Besides the residential building, service buildings, a kindergarten, a clinic and a cafeteria, there is also the 11-story Iset Hotel, a palace of culture and an administrative building. The plan was based on the idea of the communal house. During the Soviet the complex functioned as a “town within a town.” It was surrounded by control points and entry and exit into the town allowed only with a special pass. 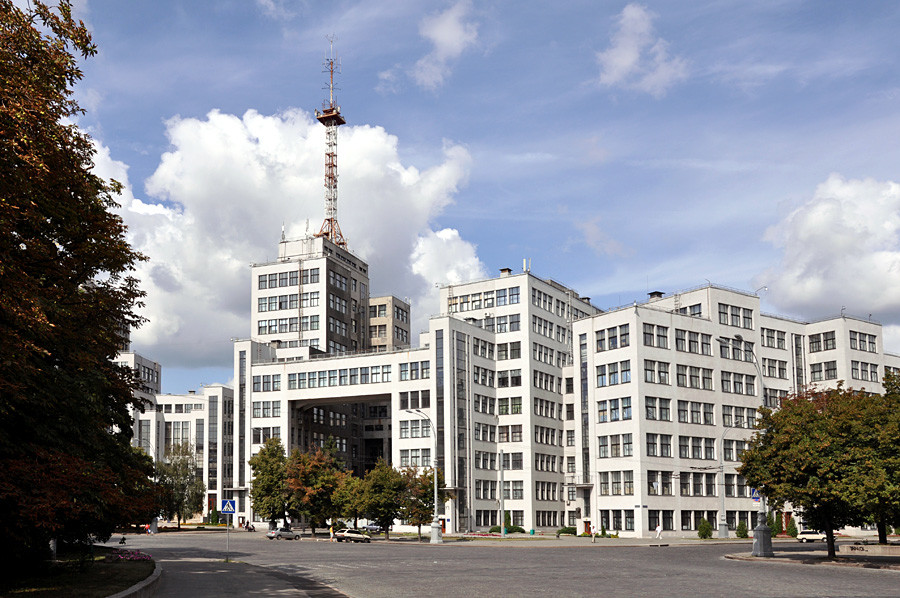 The House of Governmental Industry.

This was one of the USSR’s first skyscrapers and it was perhaps the only example of a high-rise constructivist building in the country. The House of Governmental Industry was built between 1925 and 1928. Project development was in the hands of a group of architects who were among the first to apply Le Corbusier’s principles to an administrative building (in general, the Swiss-French architect planned private villas and multi-apartment buildings). The building is included in UNESCO’s preliminary list of monuments.

7. of the Ministry of Roads in Tbilisi (Georgia) 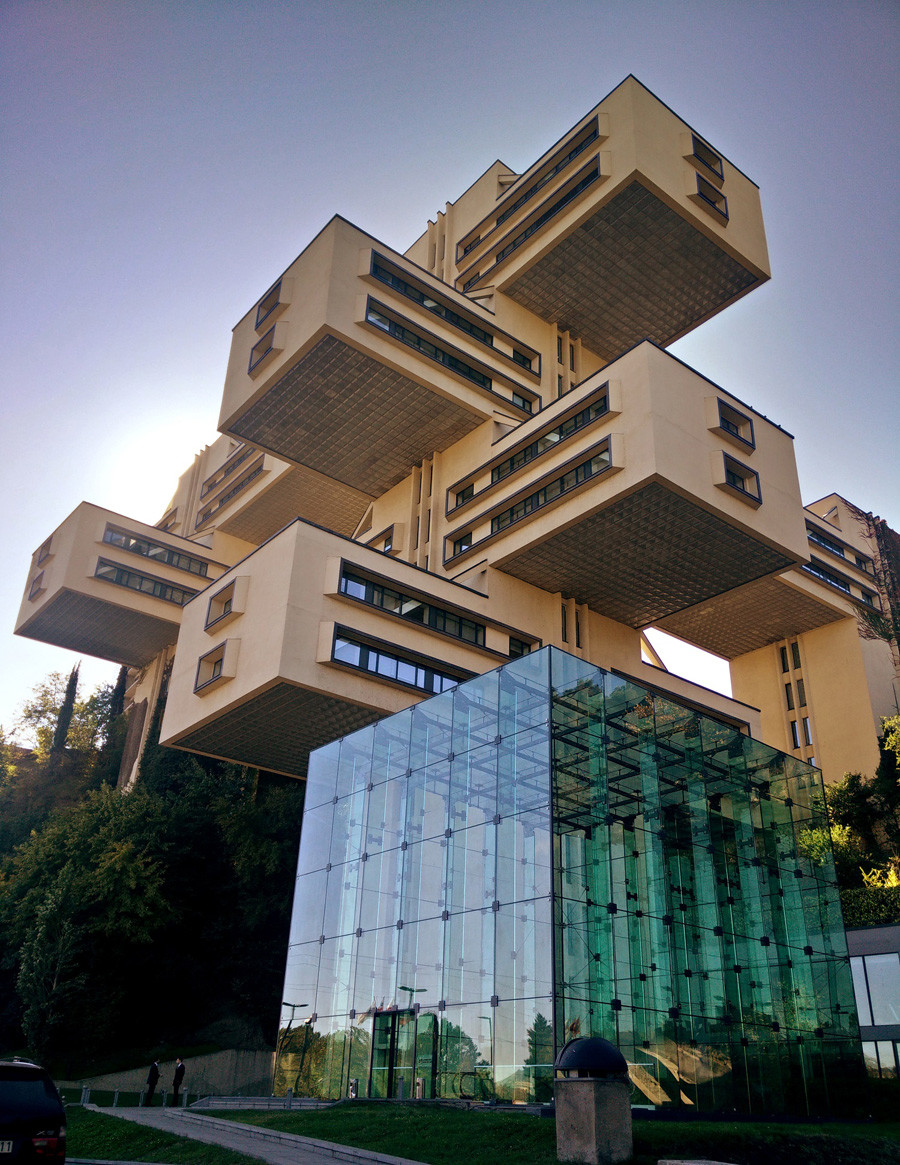 The building of Ministry of Roads.

This is another example of a free interpretation of Le Corbusier’s ideas by Soviet architects. The building, constructed in 1975, basically symbolizes a branching out road network. Its body consists of five horizontal two-story blocks that are supported by three vertical rods attached to a cliff. In 2007 the structure was recognized as a national architectural monument. 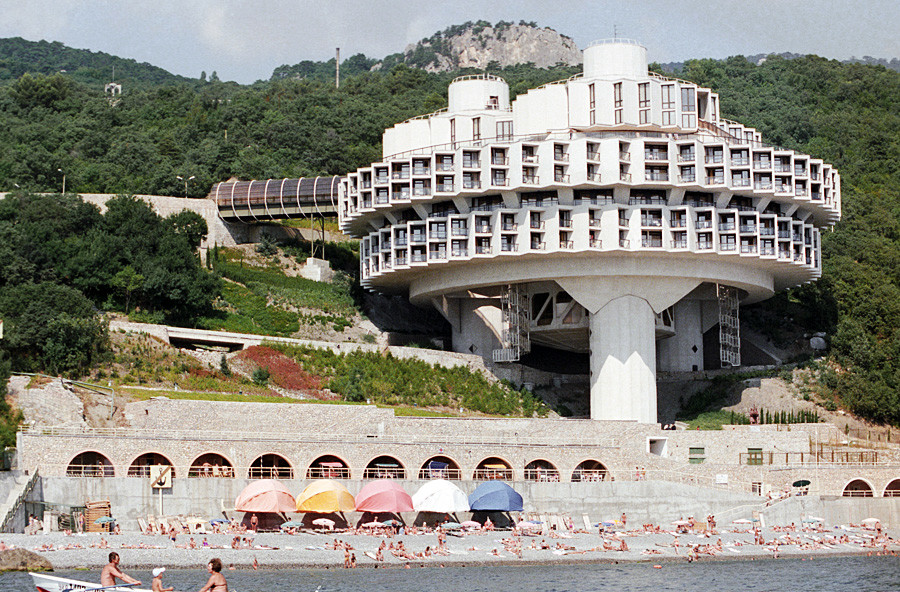 The Friendship holiday hotel in Yalta on the Black Sea coast.

is the most unusual example of modernist architecture. It was designed by architects Igor Vasilevsky and Yuri Stefanchuk in 1985. Since the structure had to stand on uneven terrain – a mountainside – its creators devised a particular construction, which people nicknamed “the UFO.” The building’s concrete in the form of a ring with an 80-meter diameter is supported by three towers that contain an elevator, and utilities. An innovative solution was the use of heat from the Black Sea for the heating, air conditioning system and hot water supplies for the buildings. 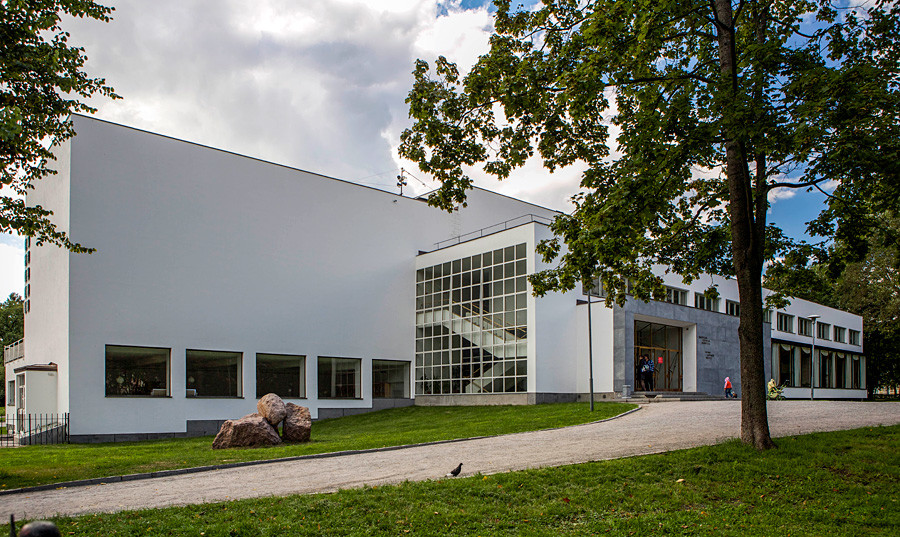 This showpiece construction, designed by modernist architect Alvar Aalto, was constructed between 1927 and when Vyborg (850 km northwest of Moscow) was part of Finland. The large rectangular building made of white concrete with free layouts, continuous glazing and (Aalto’s trademark) funnel-shaped windows in the ceiling is an example of the international style, one of whose followers was Le Corbusier. In 2013 the library was reopened after a 12-year restoration project and is now considered one of the city’s symbols. 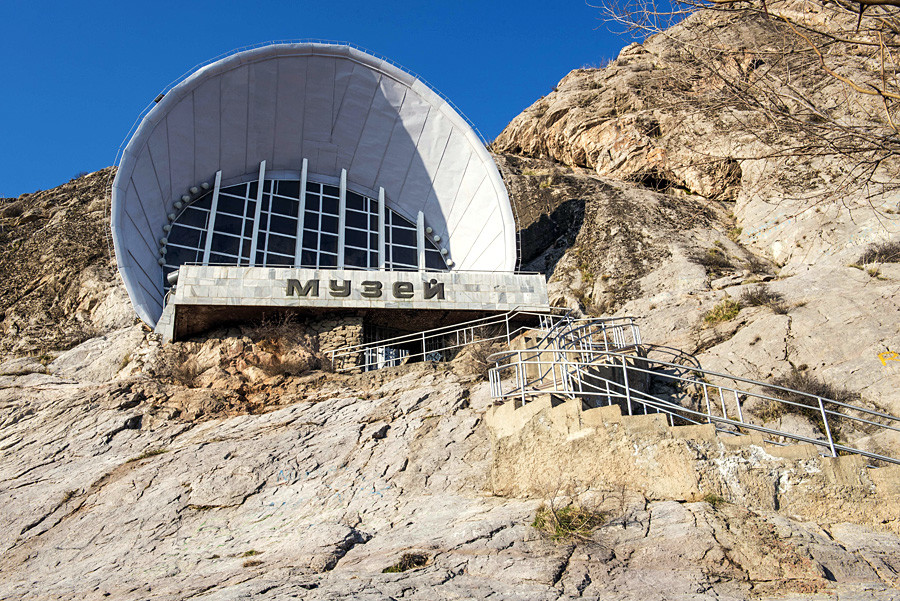 A museum on the sacred mountain of Sulaiman-Too in the city of Osh.

This is one of the most remarkable structures of Soviet modernism. Constructed in 1978, it was carved into the side of Sulayman Mountain. Although externally this building hardly resembles Le Corbusier’s typical structures, the principles according to which it was built are representative of the modernist view. The structure mimics the adjacent cliff: the entrance in the form of a concrete arch with continuous glazing and longitudinal beams blends with the mountainous relief. Behind the gate stands a two-story cavernous complex that houses the exhibits.