How Croatian military units fought against the USSR in WWII 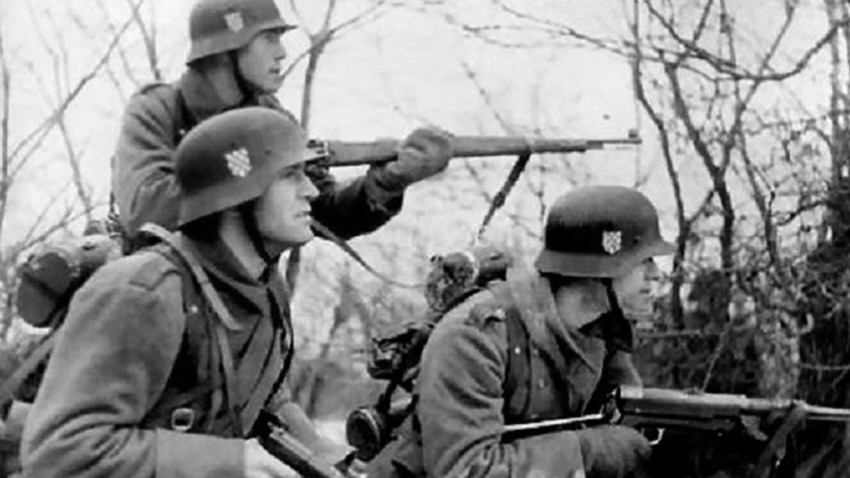 Archive photo
The Croatian Legion was the only foreign unit that the Nazis recruited in the Battle of Stalingrad. Its members thought it a great honor, not yet knowing what nightmare awaited them there.

The so-called Independent State of Croatia (NDH) was set up under the patronage of Germany and Italy on the ruins of the destroyed Kingdom of Yugoslavia in April 1941. When, two months later, Germany invaded the USSR, the NDH could have easily stayed out of that conflict: the Eastern Front was far away and Hitler did not need its armed forces for that war.

Nevertheless, on June 23, the day after the start of Operation Barbarossa, Ante Pavelic, the leader of Ustaše, the Croatian fascist ultranationalist organization, officially informed the Fuhrer that the NDH wanted to join in the fight of “all freedom-loving nations against communism” and was ready to send its troops to the Eastern Front. Hitler accepted the offer. 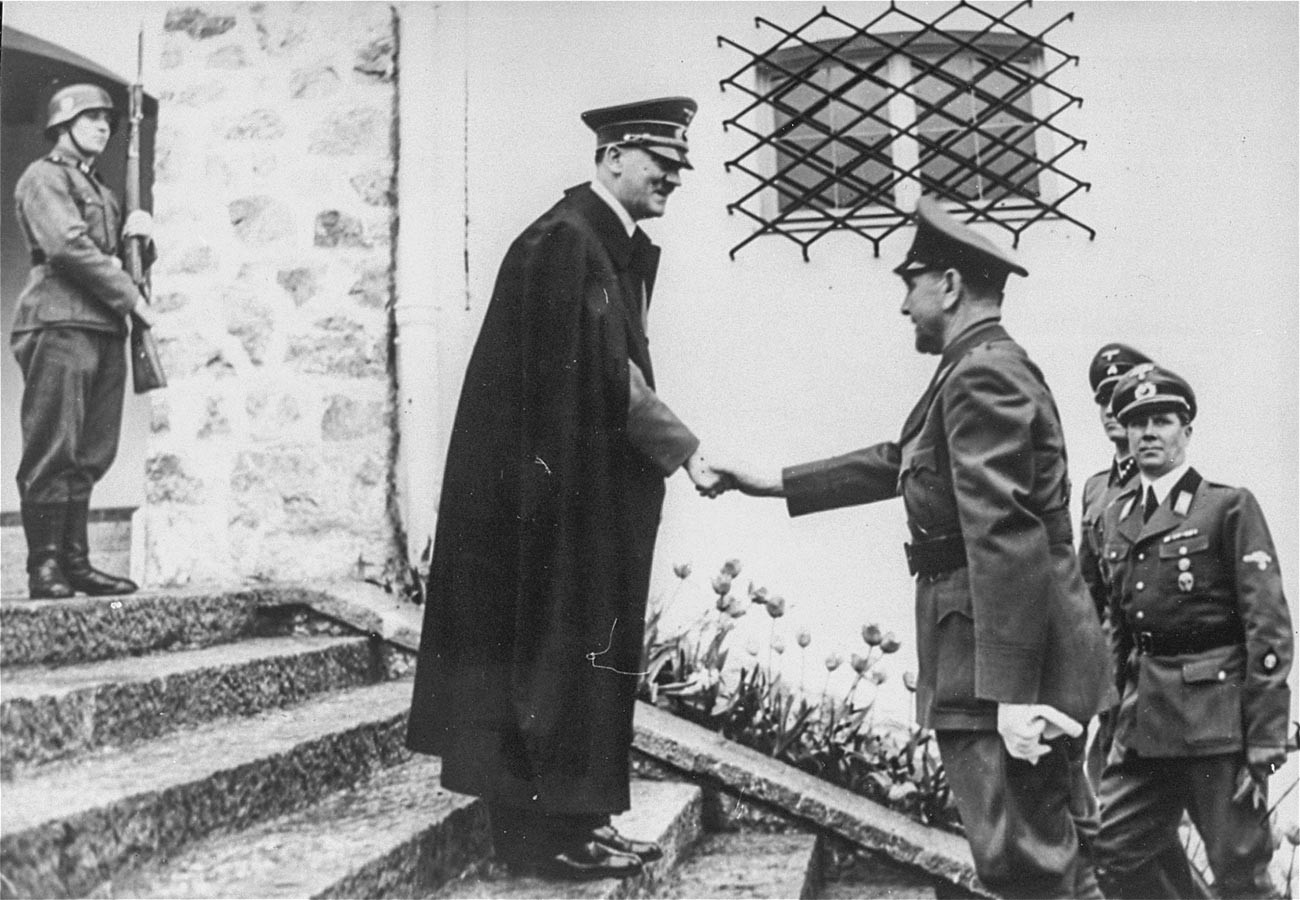 Adolf Hitler meets Ante Paveliс at the Berghof in Bavaria.

However, Pavelic’s policies caused a split within Croatian society, a significant part of which did not support the Nazis who had come to power in the country. Having learnt of the German invasion of the USSR on June 22, 1941, communists led by Josip Broz Tito (who was half-Croat, half-Slovenian) launched a large-scale armed resistance movement against the Ustaše, German Nazis and Italian fascists, which rapidly gained momentum and, in the following months, spread to most of the territory of Croatia, Bosnia and Herzegovina (which had been annexed by the NDH), Montenegro and Serbia, uniting anti-fascist minded Serbs, Bosnian Muslims, Montenegrins, Macedonians and Slovenes.

Tito’s partisan army became the strongest and best organized of the armed anti-fascist Resistance movements in the Nazi-occupied countries of Europe. It numbered from 80,000 (in 1941) to 800,000 fighters (in 1945). 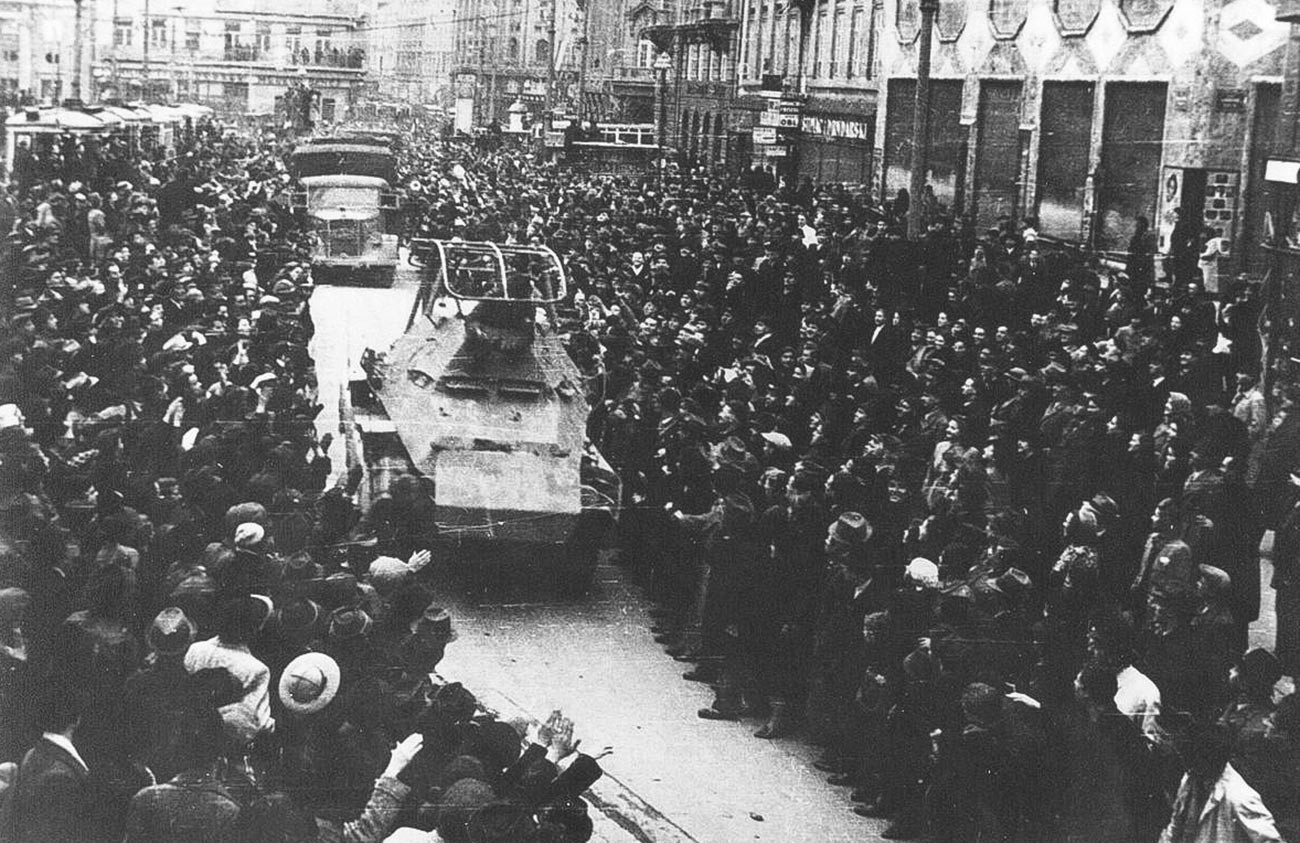 The bulk of the NDH armed forces had to remain on the territory of Croatia in order to fight - together with German and Italian invaders - against Tito’s partisans. That is why the Ustaše units sent to fight against the Soviet Union were mostly made up of volunteers.

To fight against the Red Army, the 369th Reinforced Infantry Regiment of up to 4,000 men, also known as the ‘Croatian Legion’, was set up. Its core consisted of Croats, but there were also many Bosnian Muslims in it. 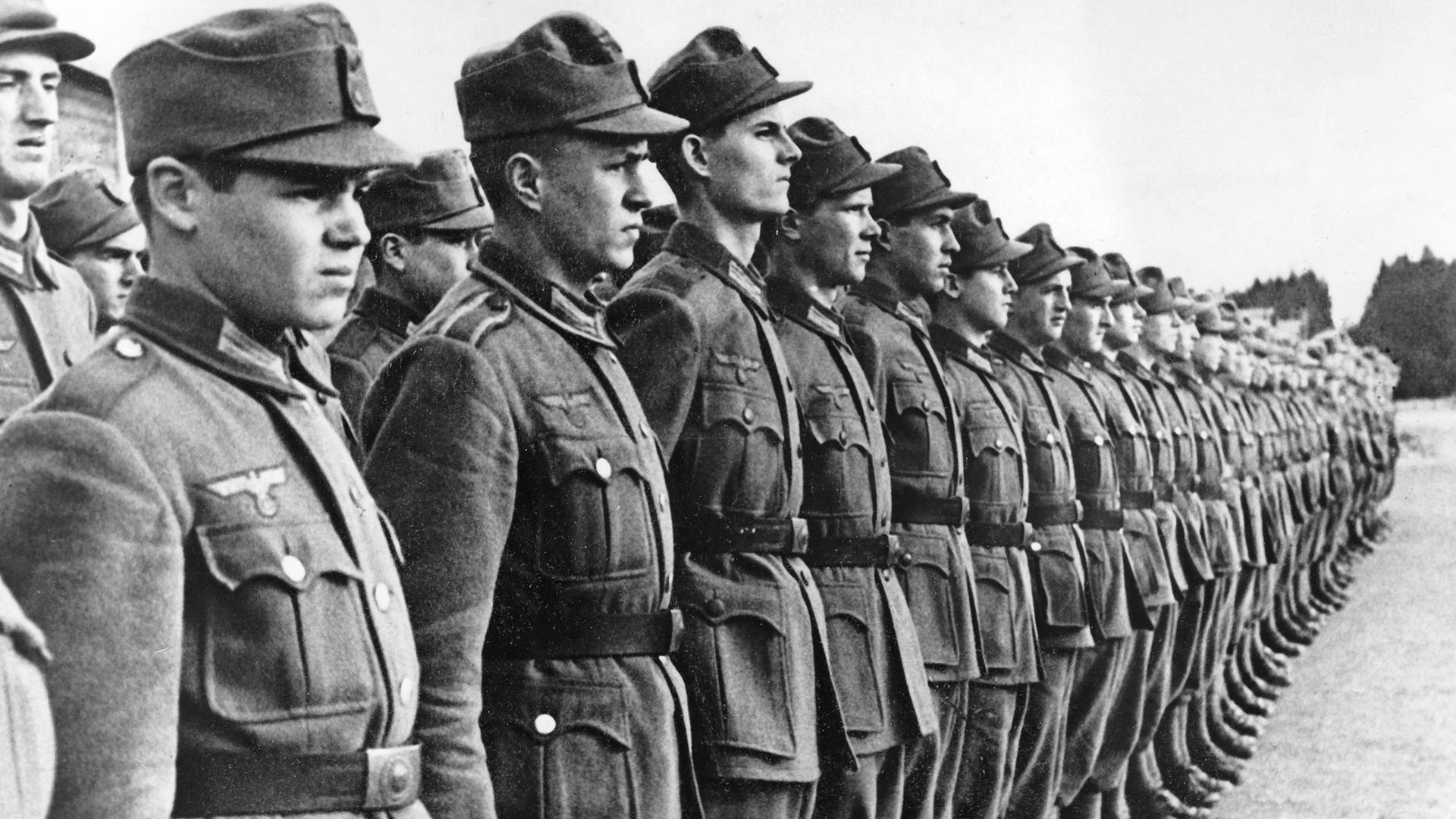 The regiment was officially part of the 100th Light Infantry Division of the Wehrmacht (from July 6, 1942, known as the 100th Jaeger Division). The Croats wore German uniforms with red and white checkers insignia and the inscription Hrvatska (“Croatia”) on the upper sleeve of the tunic and on the side of the helmet.

The regiment was called “reinforced”, because it had been assigned an artillery battery of 18 105-mm guns. 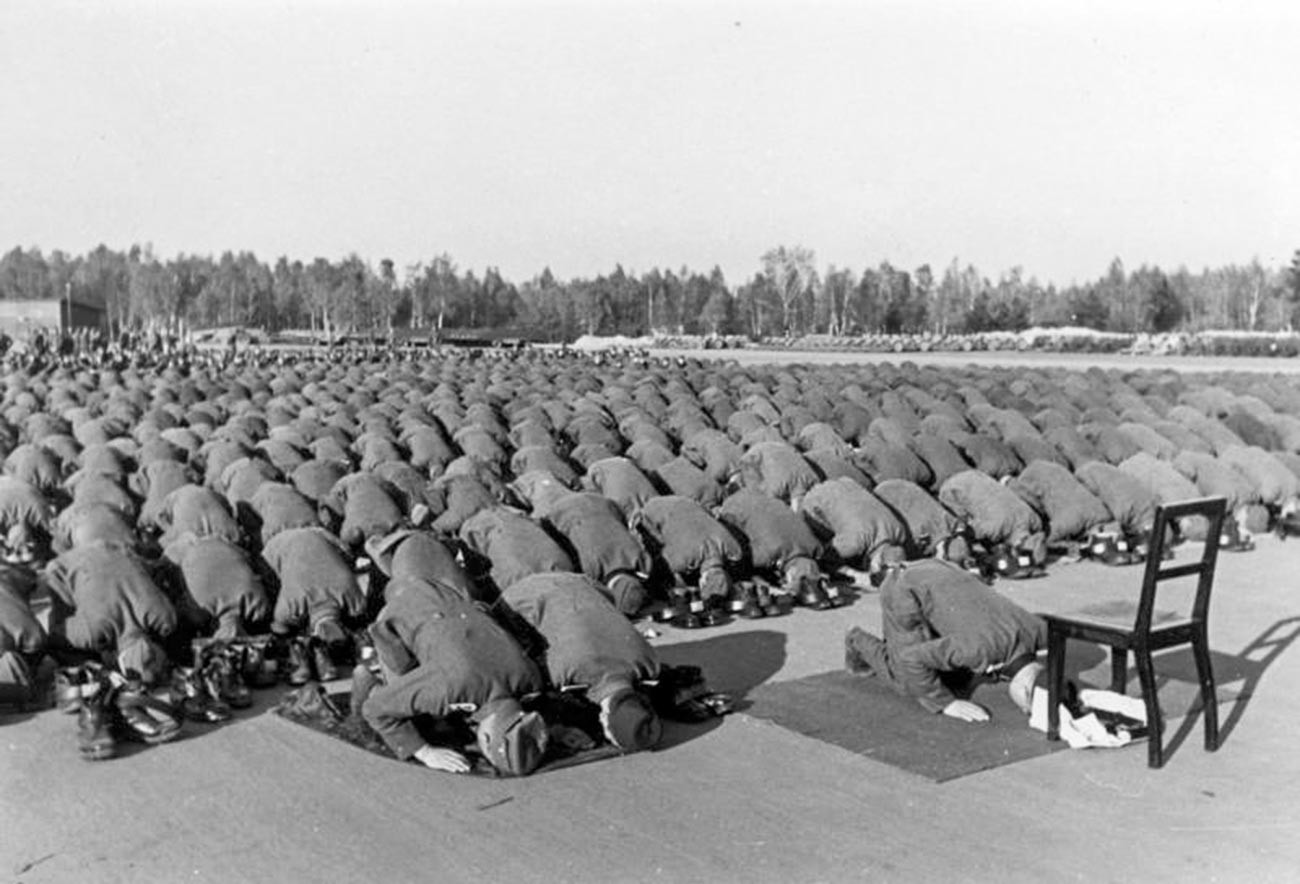 Soldiers of the 13th Waffen Mountain Division of the SS Handschar (1st Croatian).

In early October 1941, members of the Croatian Legion arrived in Ukraine, where they joined in the offensive of the Army Group South. “The Germans treat us badly,” recalled Marko Blajkovic, a soldier with an anti-tank defense company who was taken prisoner by the Soviet army. “When we come to a village, they occupy all billets, while we have to sleep in a field. This often leads to outrage among [the] Croats. Also, compared to the Germans, the Croats get poorer food rations.”

On September 27, 1942, as part of the 100th Jaeger Division, the Croatian Legion entered Stalingrad. It became the only foreign unit allied with the Germans that fought on the streets of the city, instead of having settled in the rear or stayed behind to cover the flanks of Friedrich Paulus’s 6th Army, like the Italian and Romanian troops. 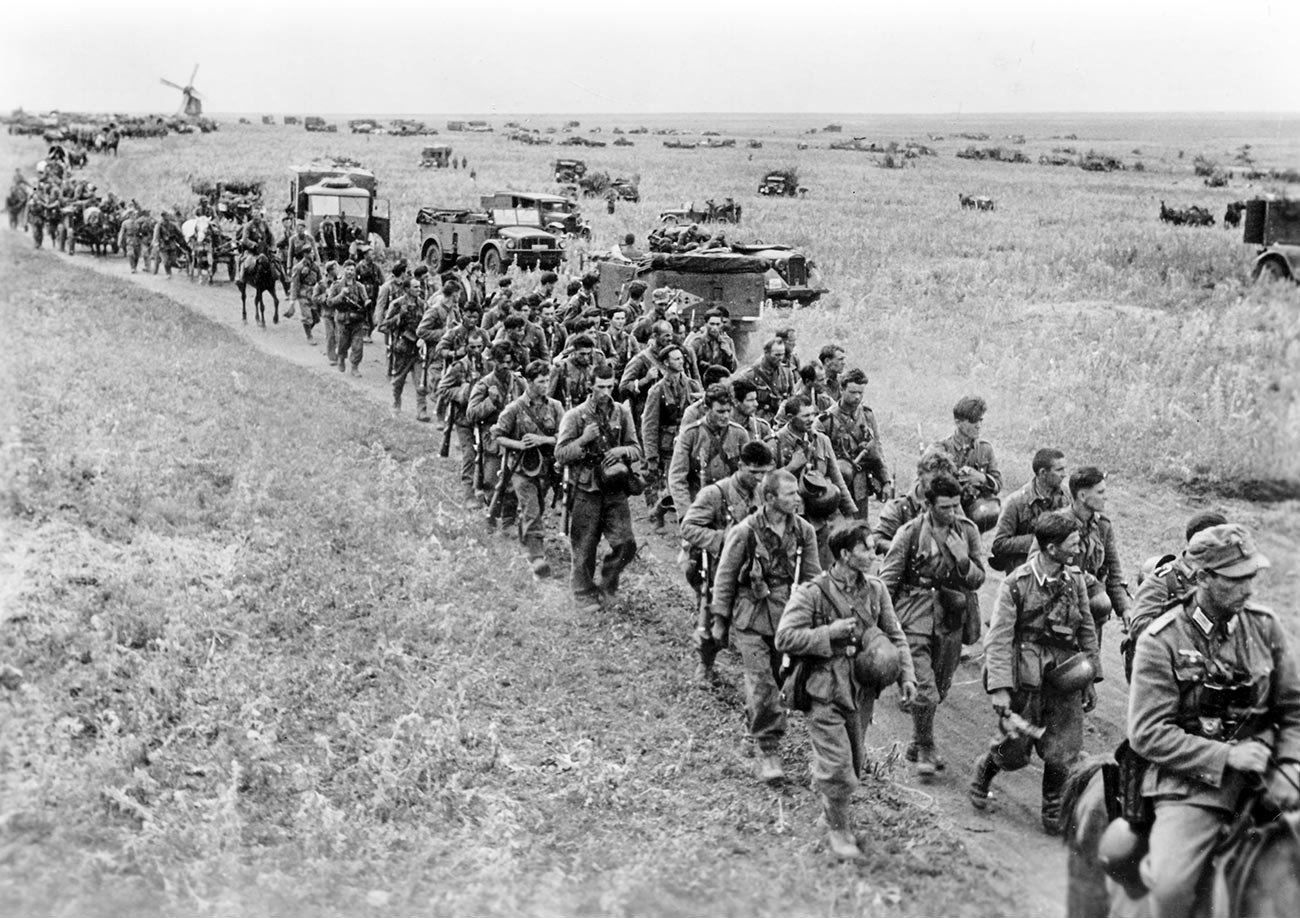 Croatian soldiers on the Eastern Front.

Members of the Croatian Legion considered it a great honor and took part in some fierce fighting to reach the banks of the Volga, where they engaged in a bloody battle for the Krasny Oktyabr metallurgical plant.

This is how the commander of the 2nd Battalion, Ivan Koric, described his unit’s participation in the Battle of Stalingrad: “We were advancing to the positions of the 227th Regiment, crawling across huge ditches left after the bombing. In the moonlight, Soviet planes easily spotted us and began to drop phosphorus bombs on us, which burned with a bright flame after exploding. Many of my soldiers were burned alive. It was a horrific sight. Uninjured and wounded soldiers jumped up and ran to save their burning comrades... My battalion, now attached to the 227th Regiment, moved forward with great difficulty, fighting for each building.” 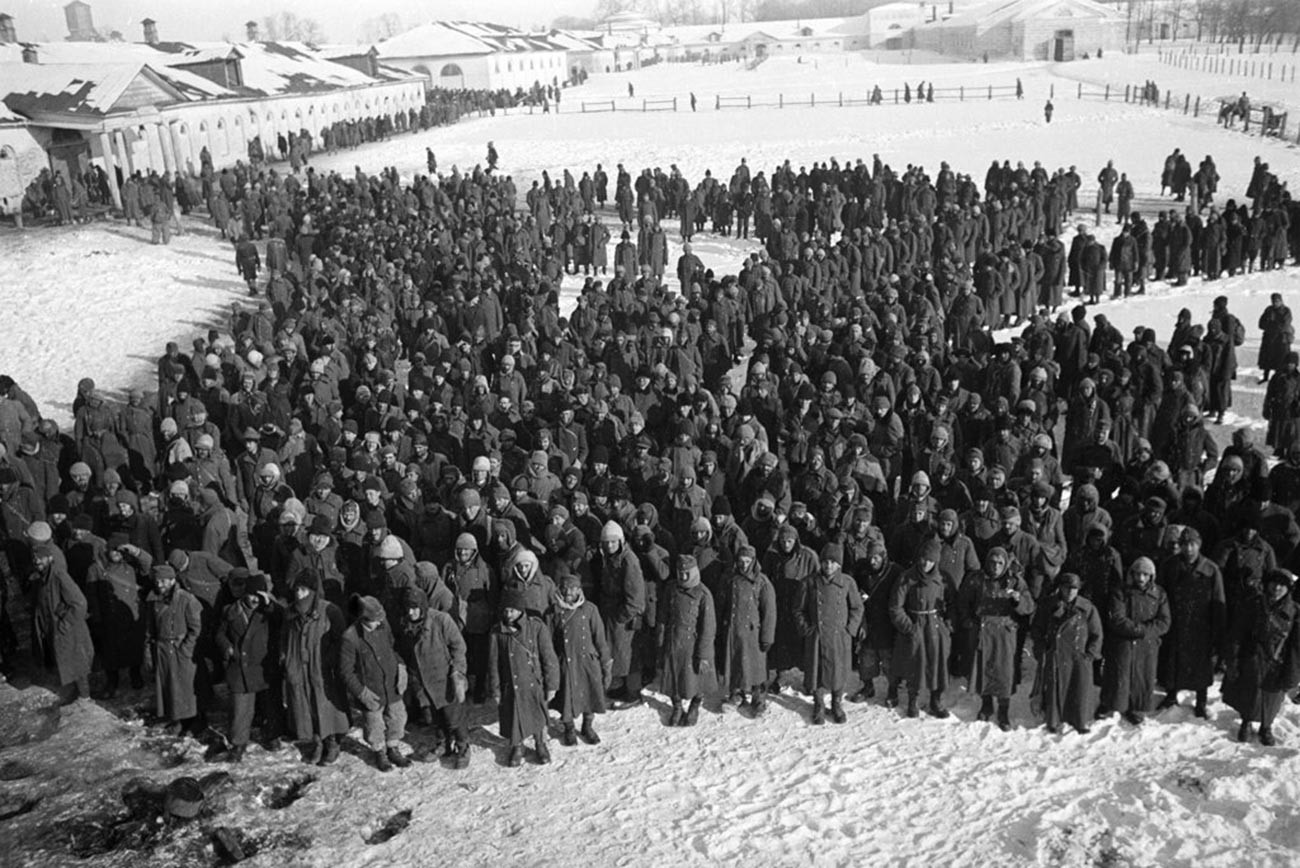 According to some sources, the German General Staff, as a sign of respect, was going to rename the 100th Jaeger Division into the 100th German-Croatian Jaeger Division. However, when, on November 19, 1942, a sudden large-scale Soviet counteroffensive began, the question of names was no longer on anybody’s mind.

After heavy winter battles, the legion practically ceased to exist. Those who survived were captured by the Soviets. About 1,000 members of the Croatian Legion were evacuated from Stalingrad by air. They joined the new 369th Croatian Infantry (‘Devil’) Division, which was fighting against Tito’s partisans in the Balkans. They never returned to the Eastern Front. 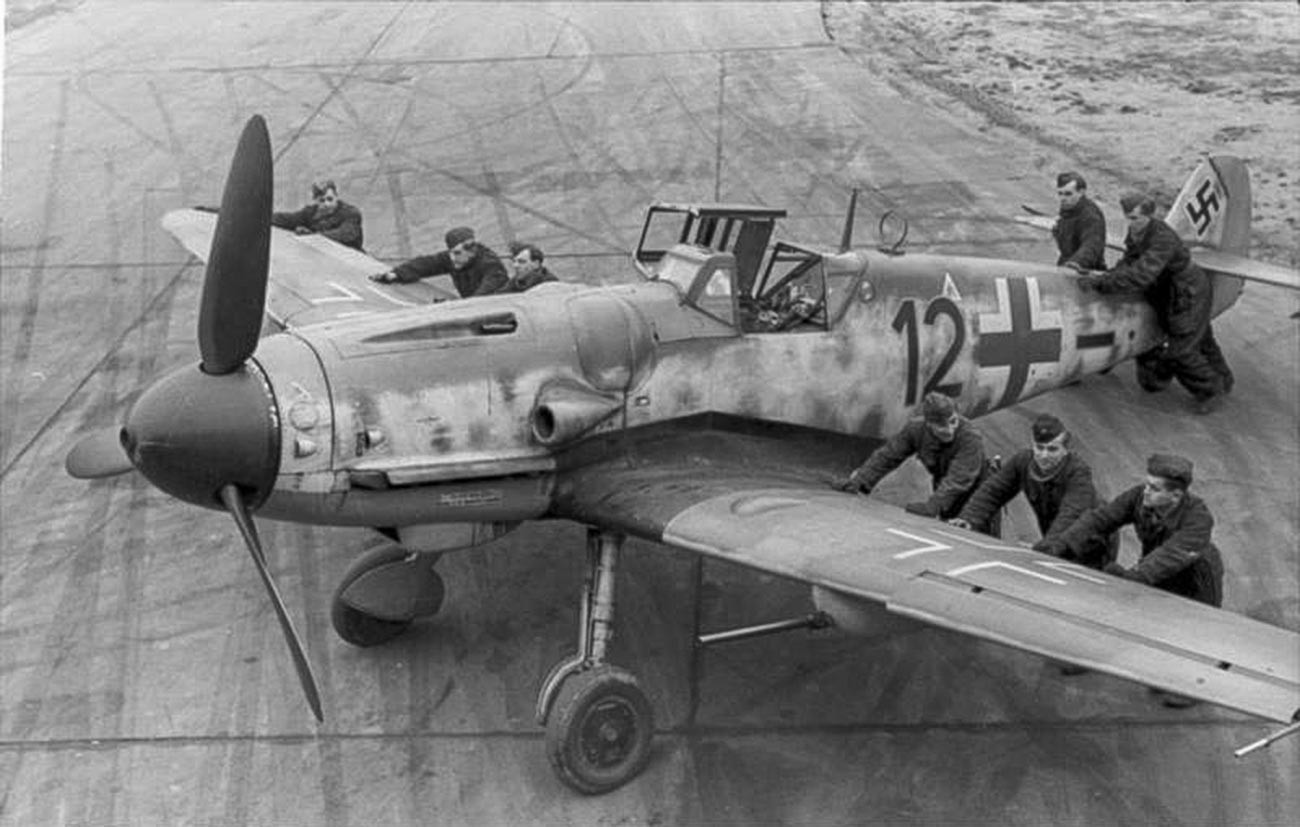 It should be noted that not all NDH servicemen fought as part of the German troops. At the request of the Italians, a Croatian Light Transport Brigade of about 1,200 men was deployed with the 8th Italian Army in the USSR. It was wiped out in the battles on the Don in December 1942.

In early October 1941, Army Group South was joined not only by the 369th Reinforced Infantry Regiment, but also by the 4th Fighter Squadron, a part of the Croatian Air Force Legion. Croatian pilots flying Messerschmitt Bf 109 aircraft received high praise from the German command. 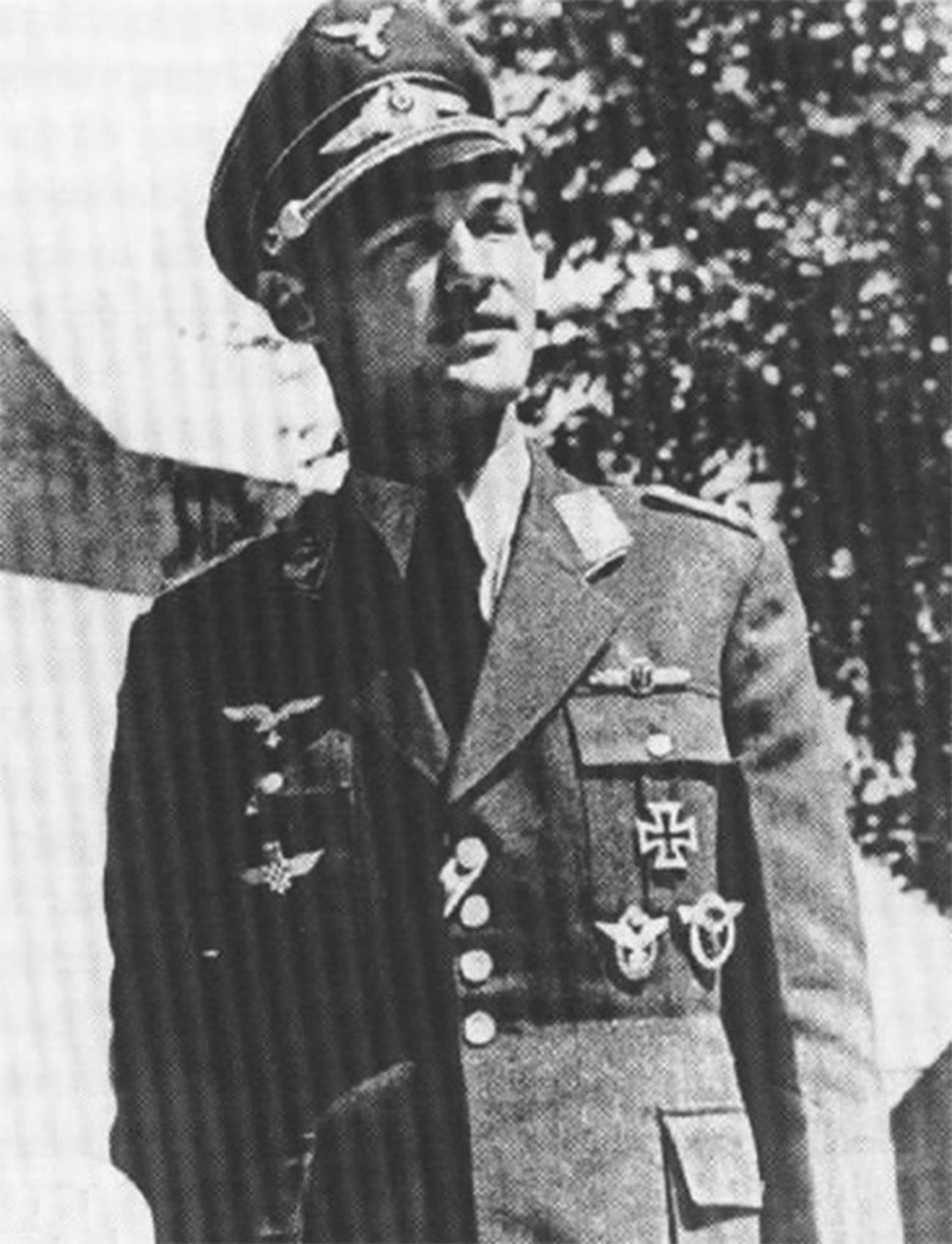 Before they returned to the Balkans in July 1944, the Croats had shot down a total of 283 Soviet planes. Fourteen pilots received the status of flying ace, which was granted to pilots credited with shooting down at least five enemy aircraft, while four Croatian pilots were awarded the Iron Crosses first and second class.

The Croatian pilot who shot down the largest number of Soviet aircraft (44) was Mato Dukovac. Which did not prevent him from going over to the side of the Red Army. He did it on September 20, 1944, although, according to another theory, he was, in fact, taken prisoner. Later, Dukovac served as an instructor in the Soviet and Yugoslav air forces. 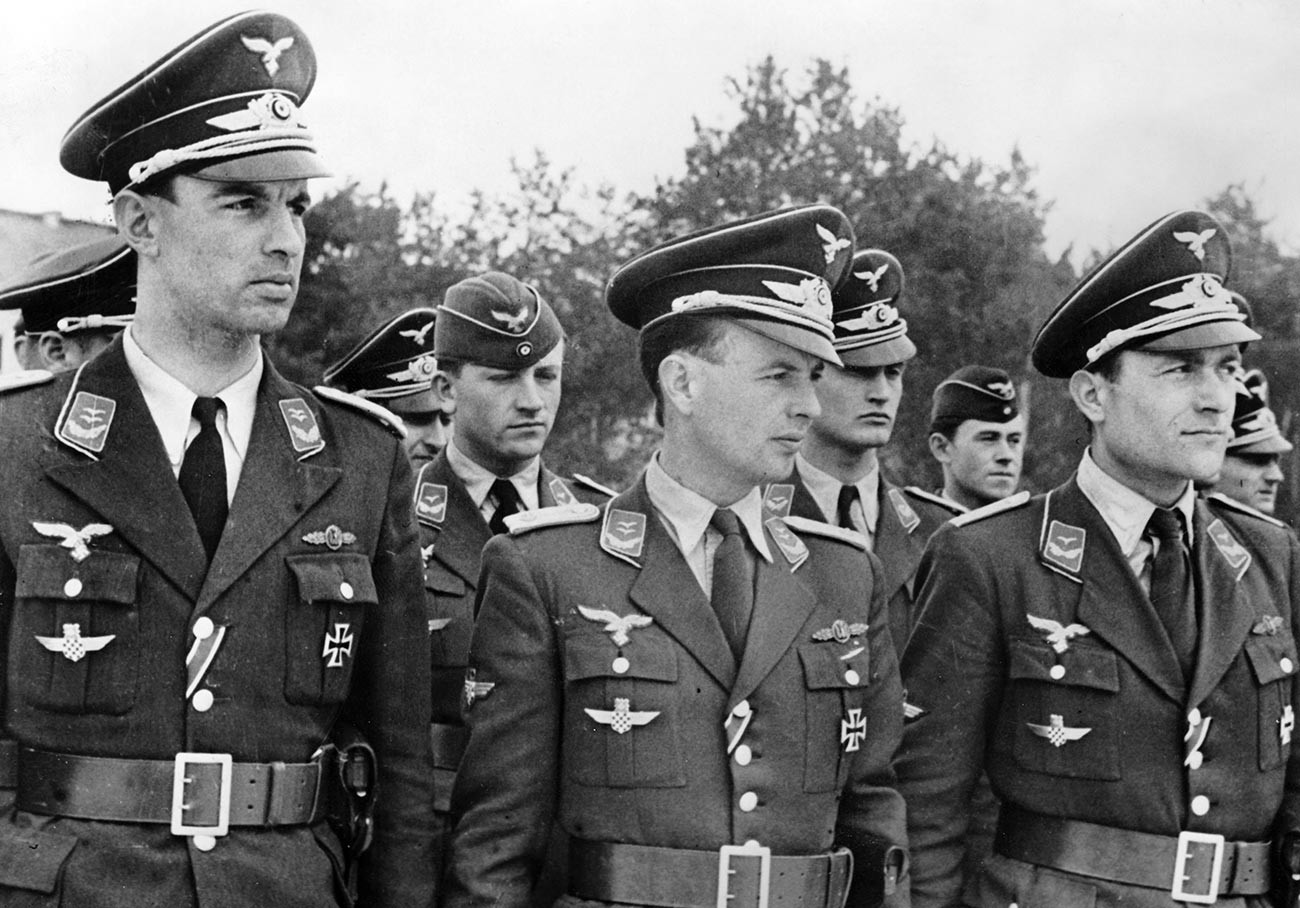 Luftwaffe pilots with the Iron Cross I.

Another part of the Croatian Air Force Legion, the 5th Bomber Squadron, was operating more to the north. Equipped with German Dornier Do17 aircraft, it took part in the bombing of Leningrad and Moscow.

Starting from the fall of 1941, a Croatian Naval Legion, which became part of the German navy, the Kriegsmarine, operated in the Black Sea. Same as their comrades in the infantry and air force units, its members wore German uniforms with an insignia on the sleeve depicting the Croatian national emblem. 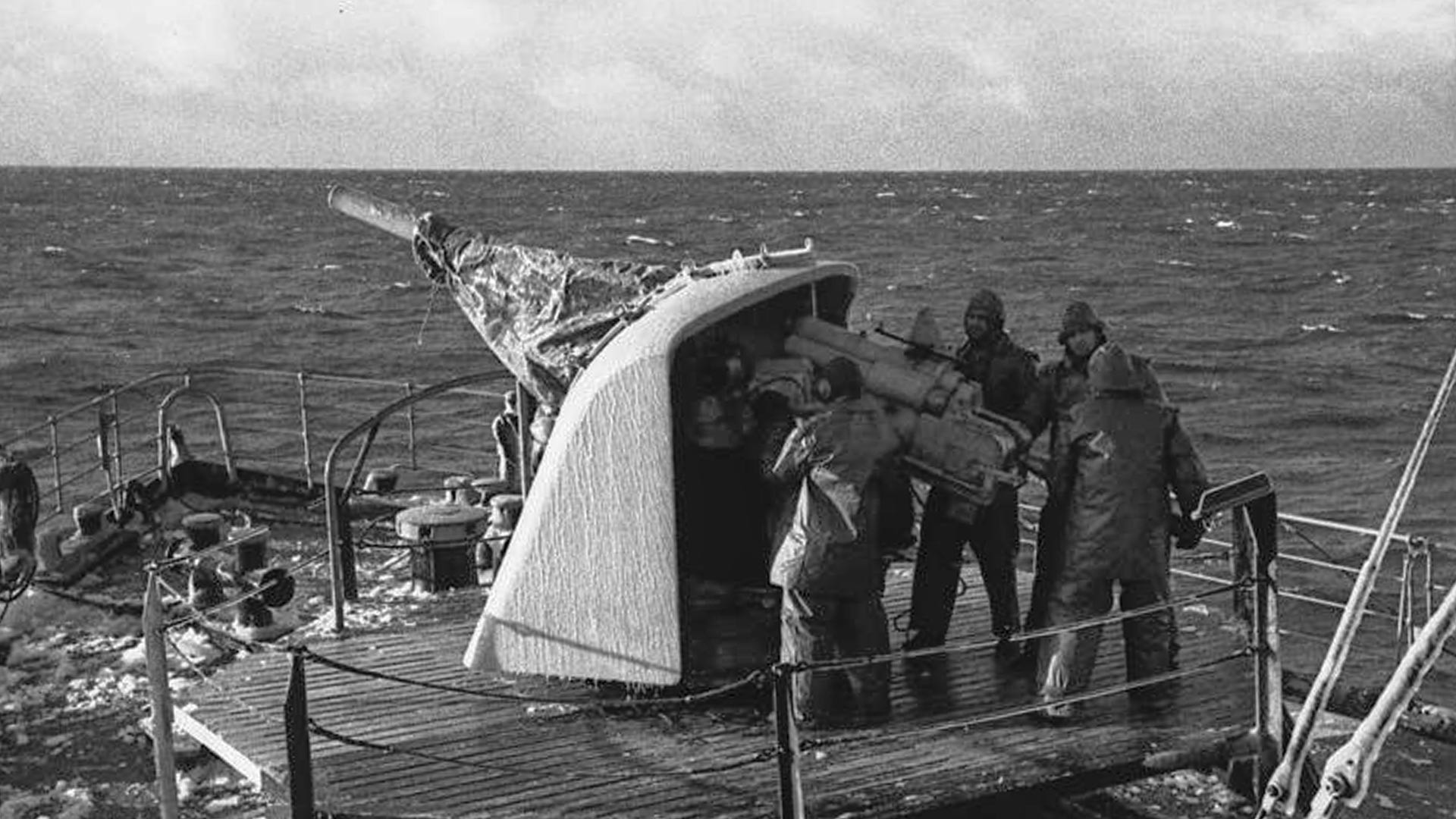 Equipped with minesweepers and high-speed assault boats, the legion was tasked with laying mines, guarding the coast and hunting for Soviet submarines. In the spring of 1944, it was disbanded and its personnel went to fight in the Adriatic.