How the world greeted Gagarin after his historic spaceflight (PHOTOS) 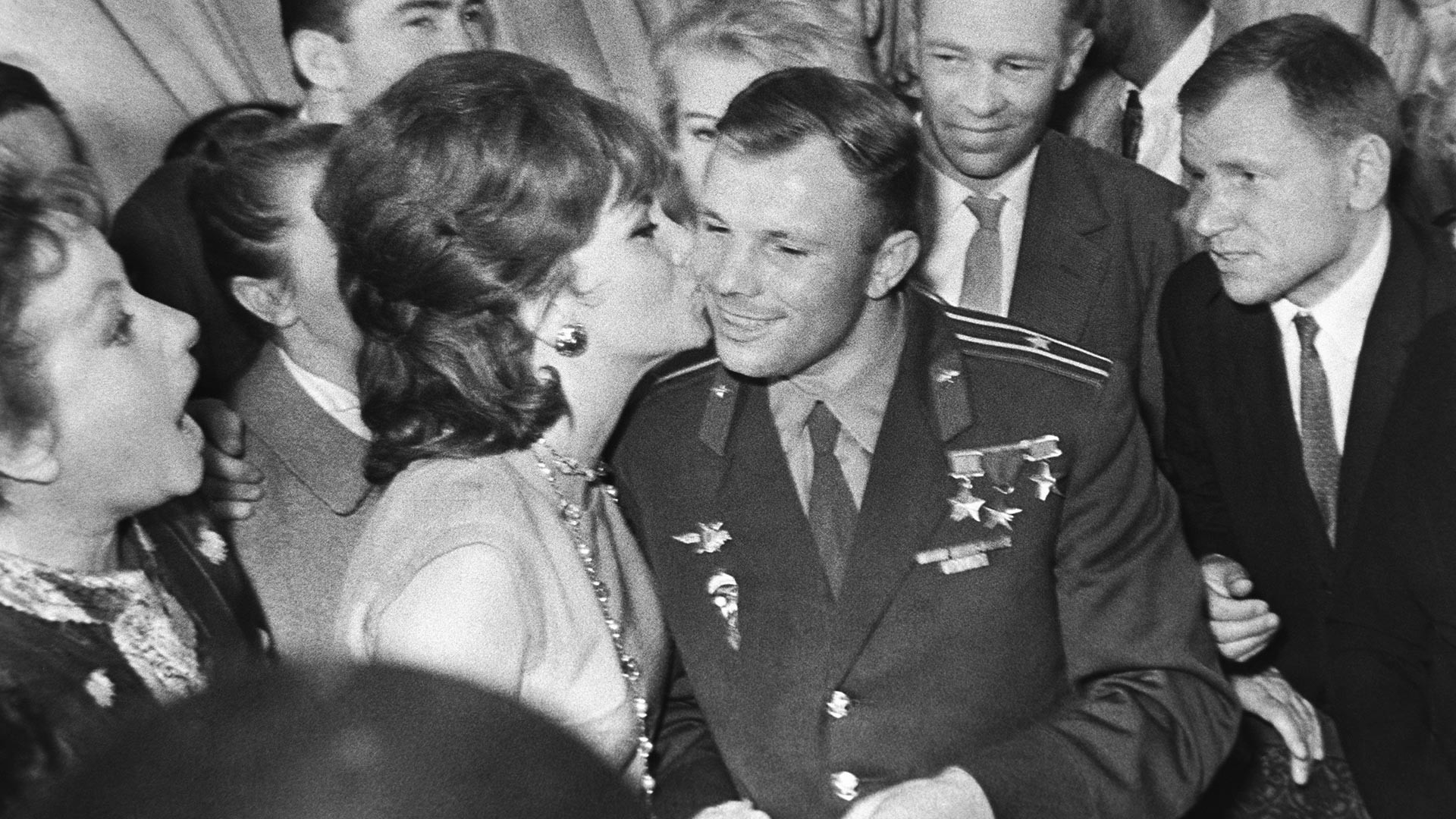 Leonid Velikzhanin, Valery Mastyukov/TASS
April 12, 1961, was a day that changed history. The first human flew into space and returned safely, becoming the number one celebrity in the world. In his homeland, he was greeted like a rock star, and countries all over the world clambered to invite him to visit.

Sixty years ago, at 10:02 Moscow time, the TASS news agency broadcast a report about the first crewed flight into space, which became the hottest news item in the world. In the Soviet Union, everyone dropped what they were doing. The nation sat glued to the radio, long lines stretched in front of newsstands, and jubilant crowds gathered in the center of Moscow and other towns and cities.

“The working day was ‘ruined’: it turned into a holiday, people were gripped by euphoria, the previously unknown Yuri Gagarin was suddenly on everyone’s lips,” recalled engineer Lev Muzurov.

A spontaneous gathering in Moscow on April 12, 1961, in honor of Gagarin's flight: “Glory to the first Soviet cosmonaut” 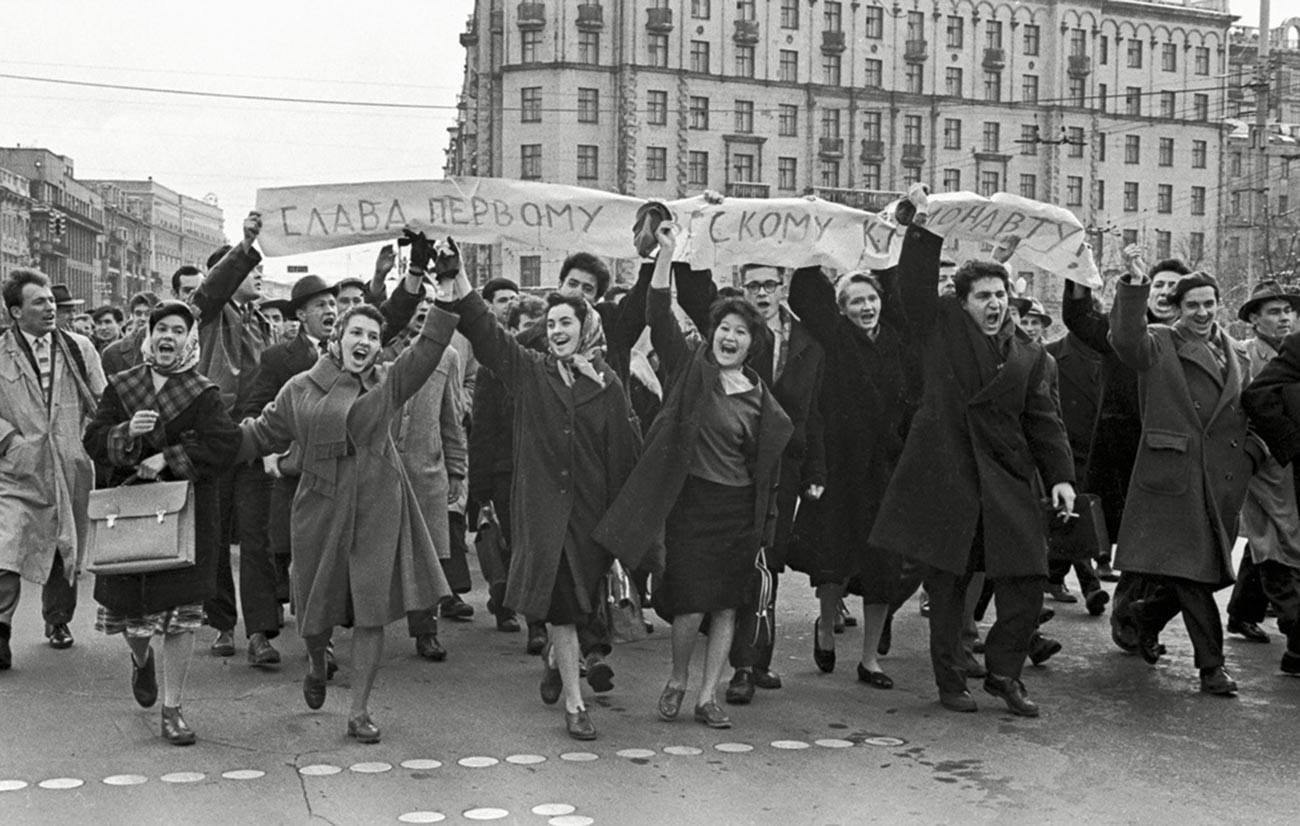 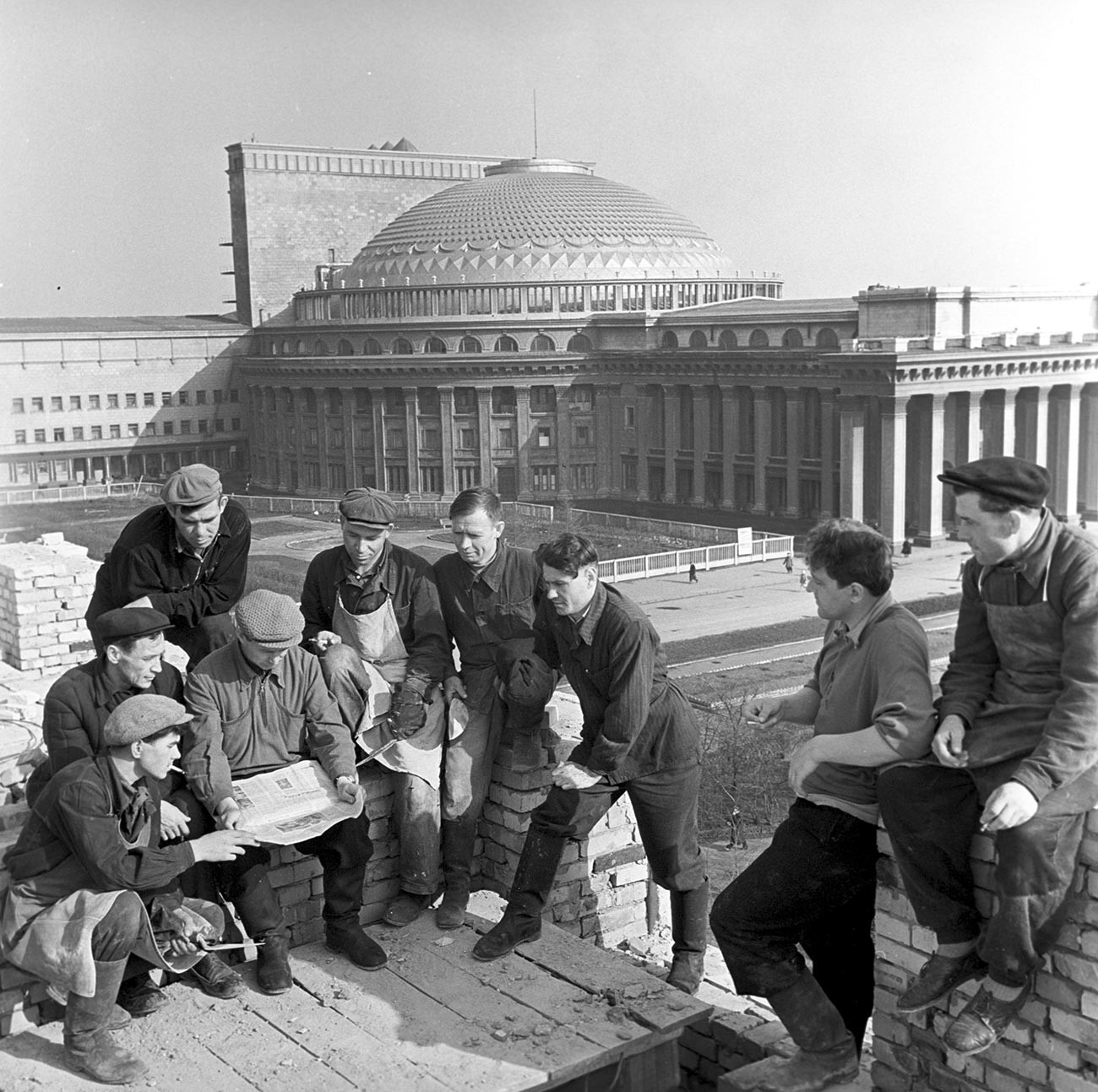 Muscovites crowd around a newsstand 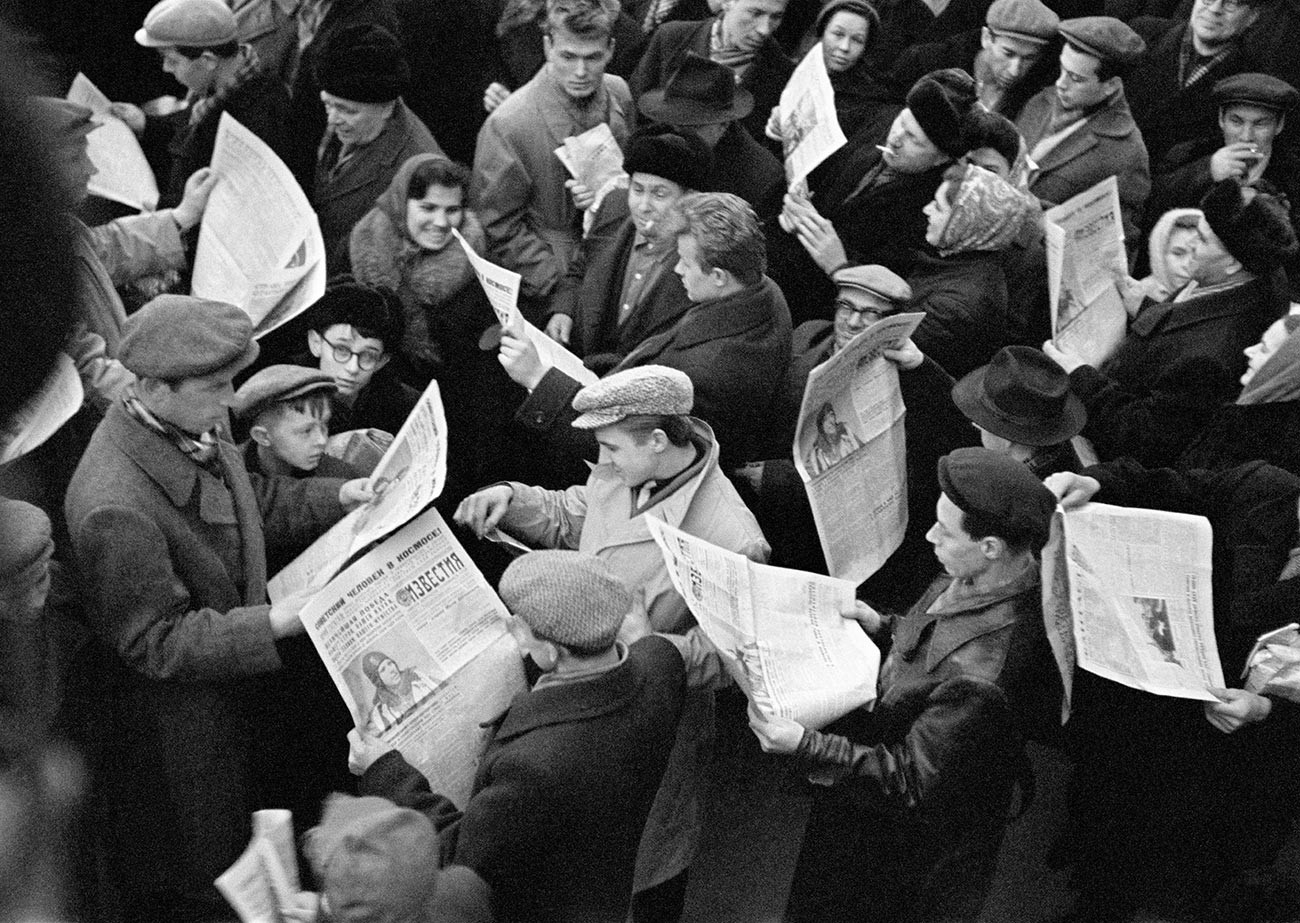 Garment factory workers listen to the news about Gagarin's flight 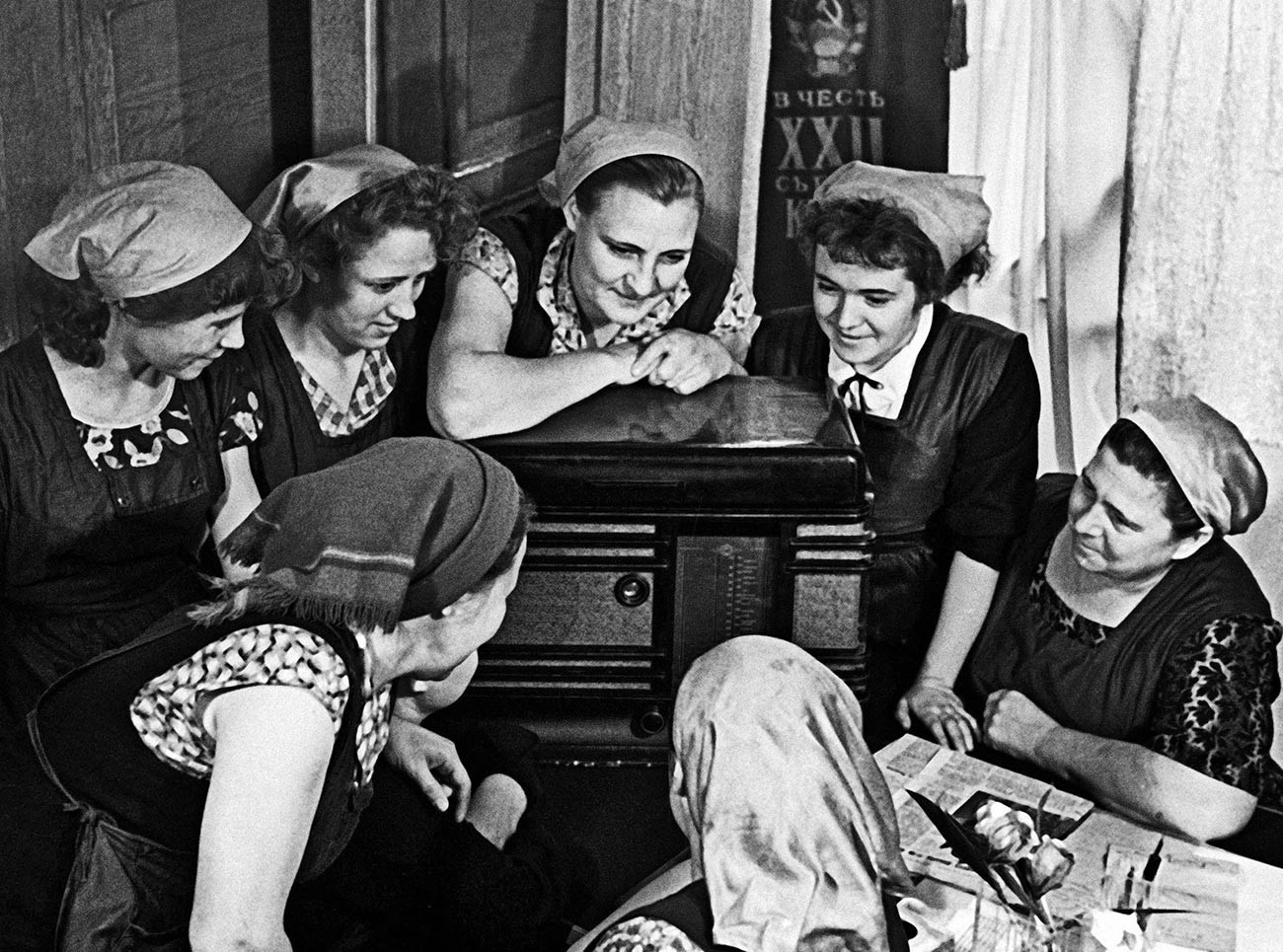 Evgeny Skazkin, a worker from the city of Engels, near where Gagarin landed, recalled this day as follows: “It was like some kind of shock. After a while, it dawned on me, and my heart was so overjoyed that I couldn’t stop myself from shouting out: ‘Hurrah!  We've gone to space!’ I ran out into the hallway of the hostel. The guys ran out of their rooms, and we embraced and danced for joy. <...> The whole country was jubilant. Gagarin's flight seemed to us to be the most life-affirming event for the country, which had just recovered from the most horrendous ordeal of the Great Patriotic War and was now striding ahead.”

On April 14, two days after the successful flight, Gagarin was taken to Moscow by specially chartered plane 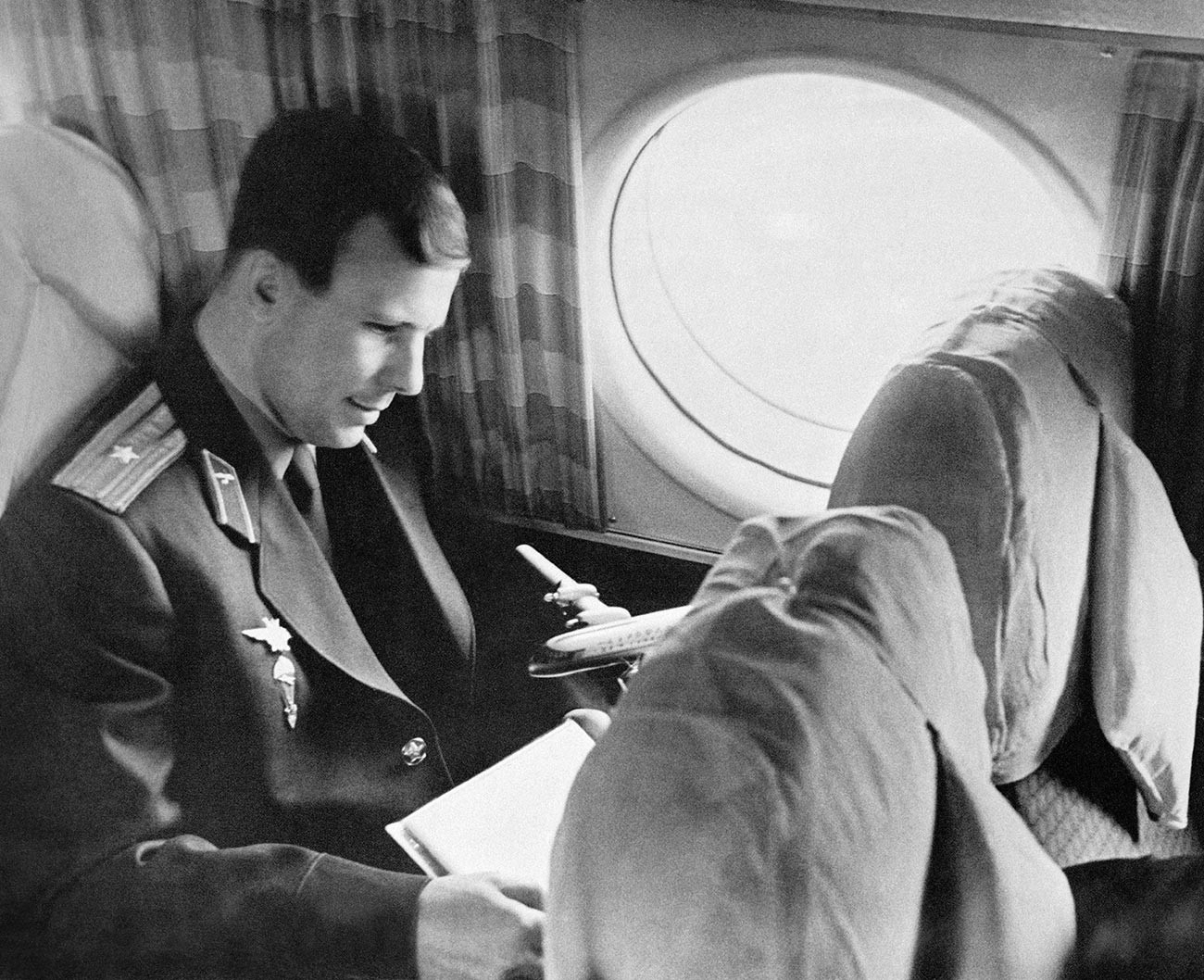 Gagarin is greeted at Vnukovo Airport 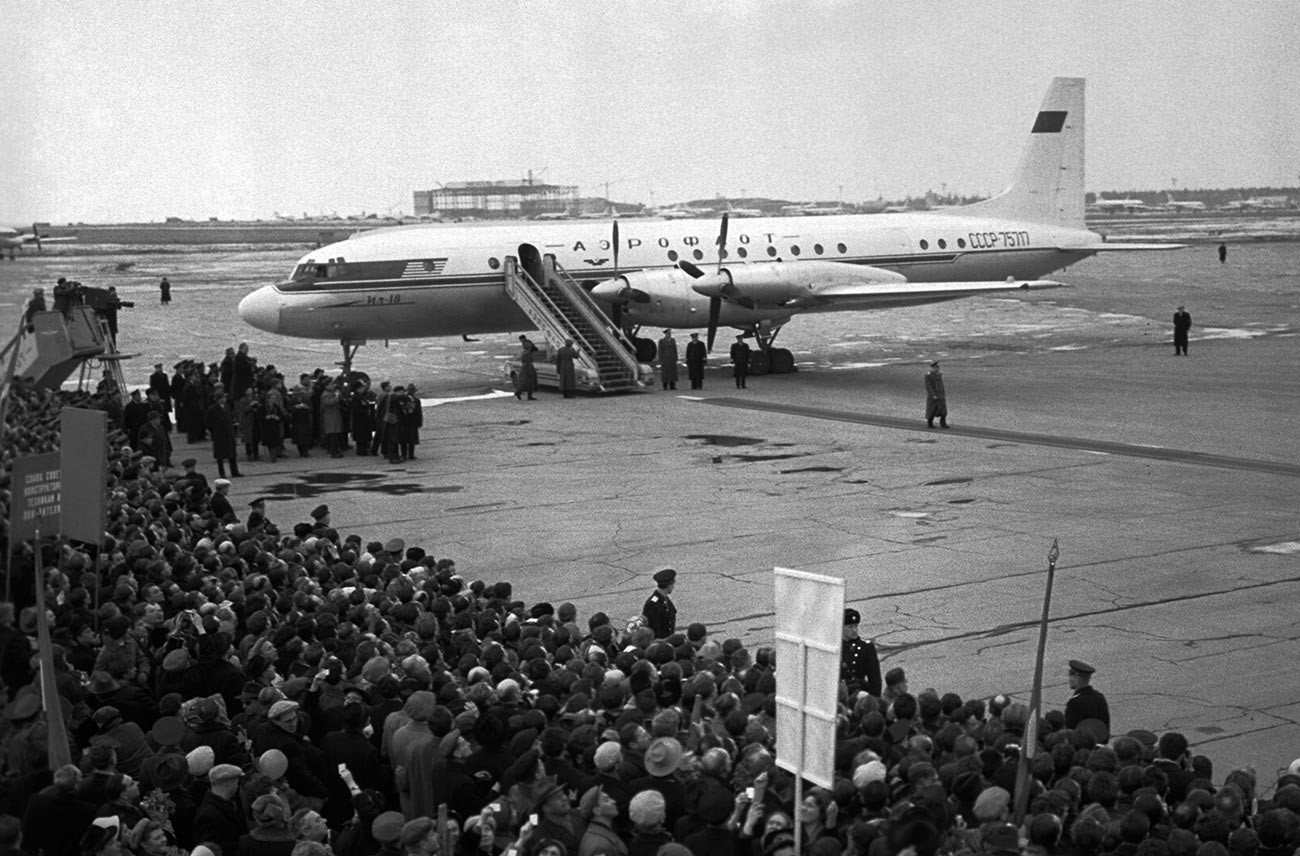 Reporters at the official welcoming of the world's first cosmonaut 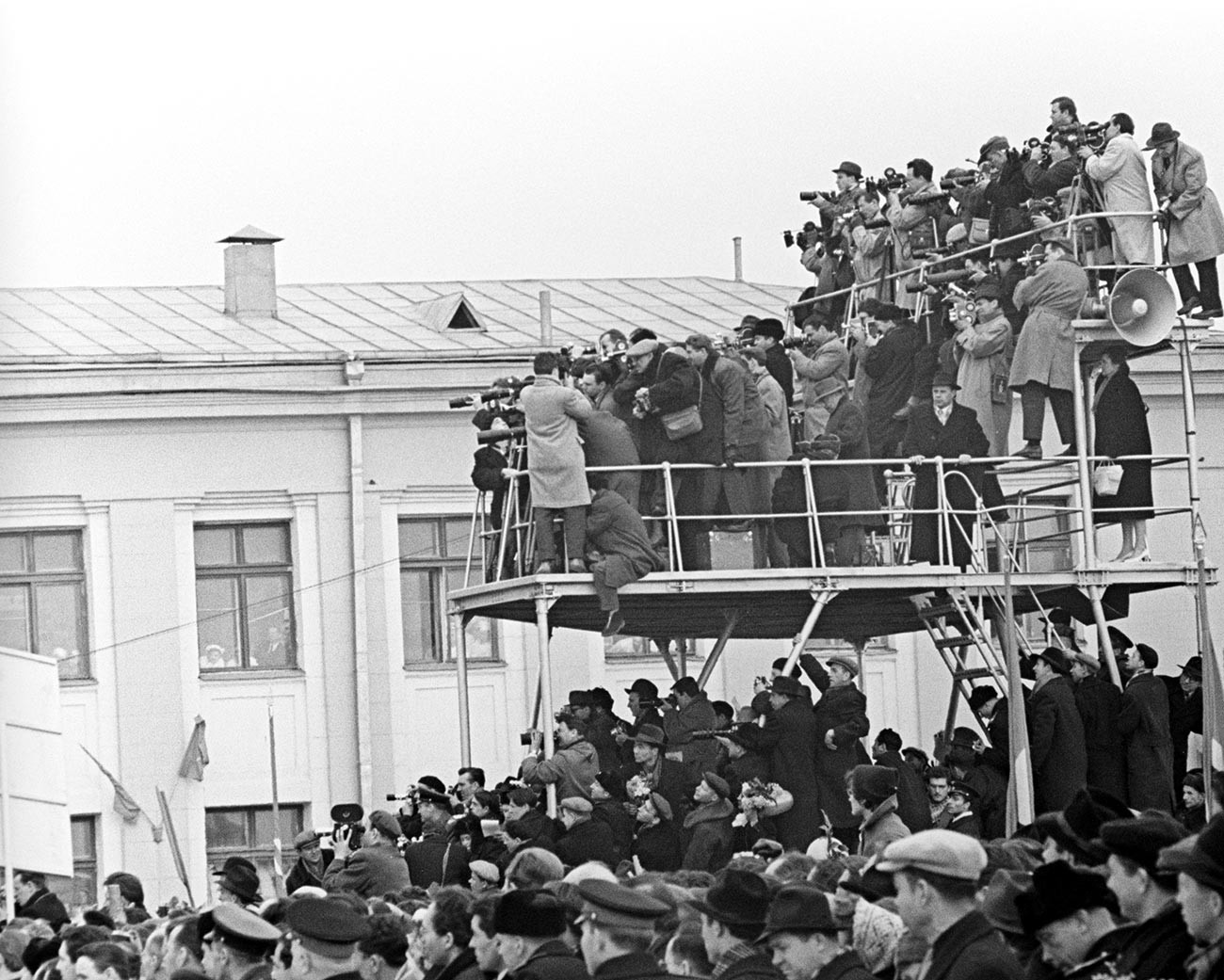 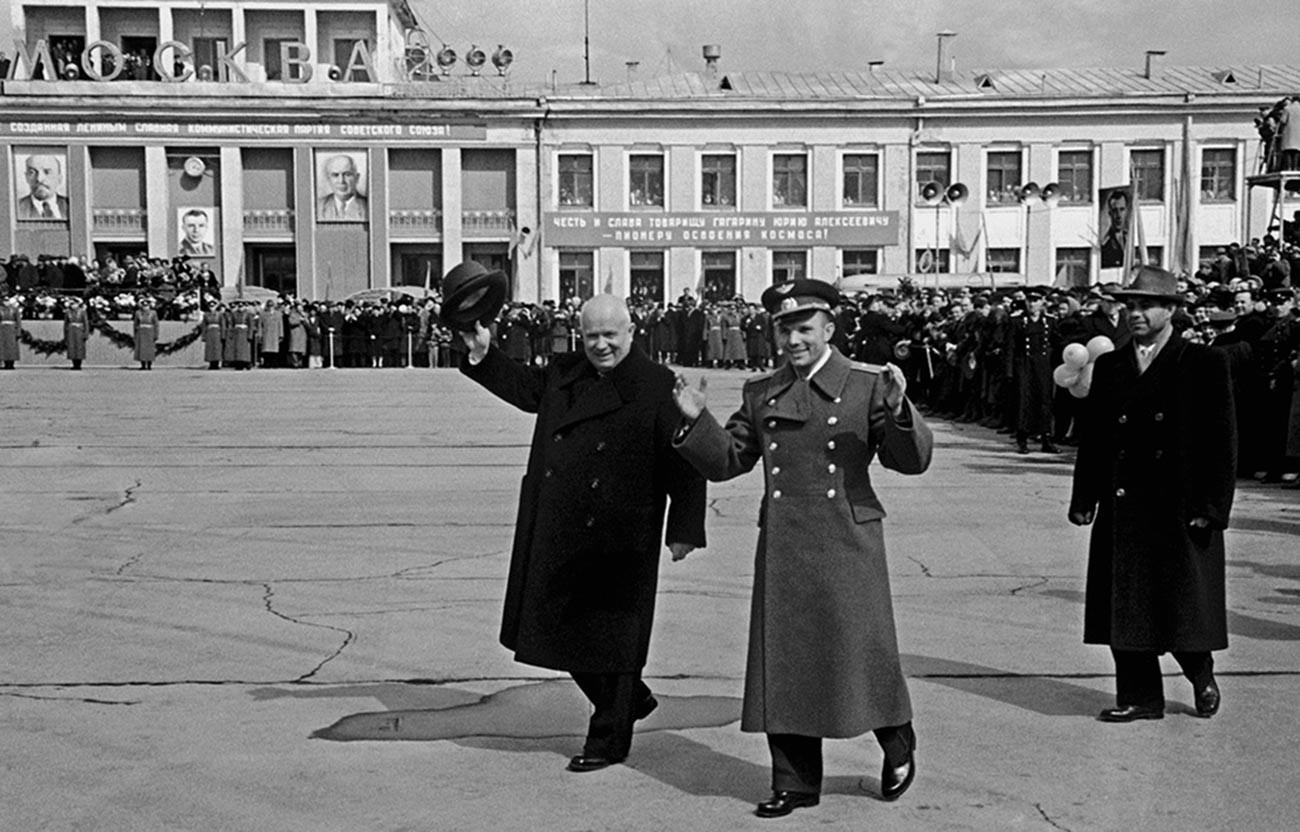 On April 14, Moscow became a party city. Schoolchildren and students skipped class to catch a glimpse of the world's first cosmonaut; many were given the day off work. “We knew that Gagarin would appear on the 14th. Lessons were simply out of the question on that day. The whole department was excused, and everyone went to greet Gagarin,” recalls Maria Solodukhina, a student in 1961. Music played on Leninsky Prospekt street, people were jumping for joy, shouting "Hurrah!" 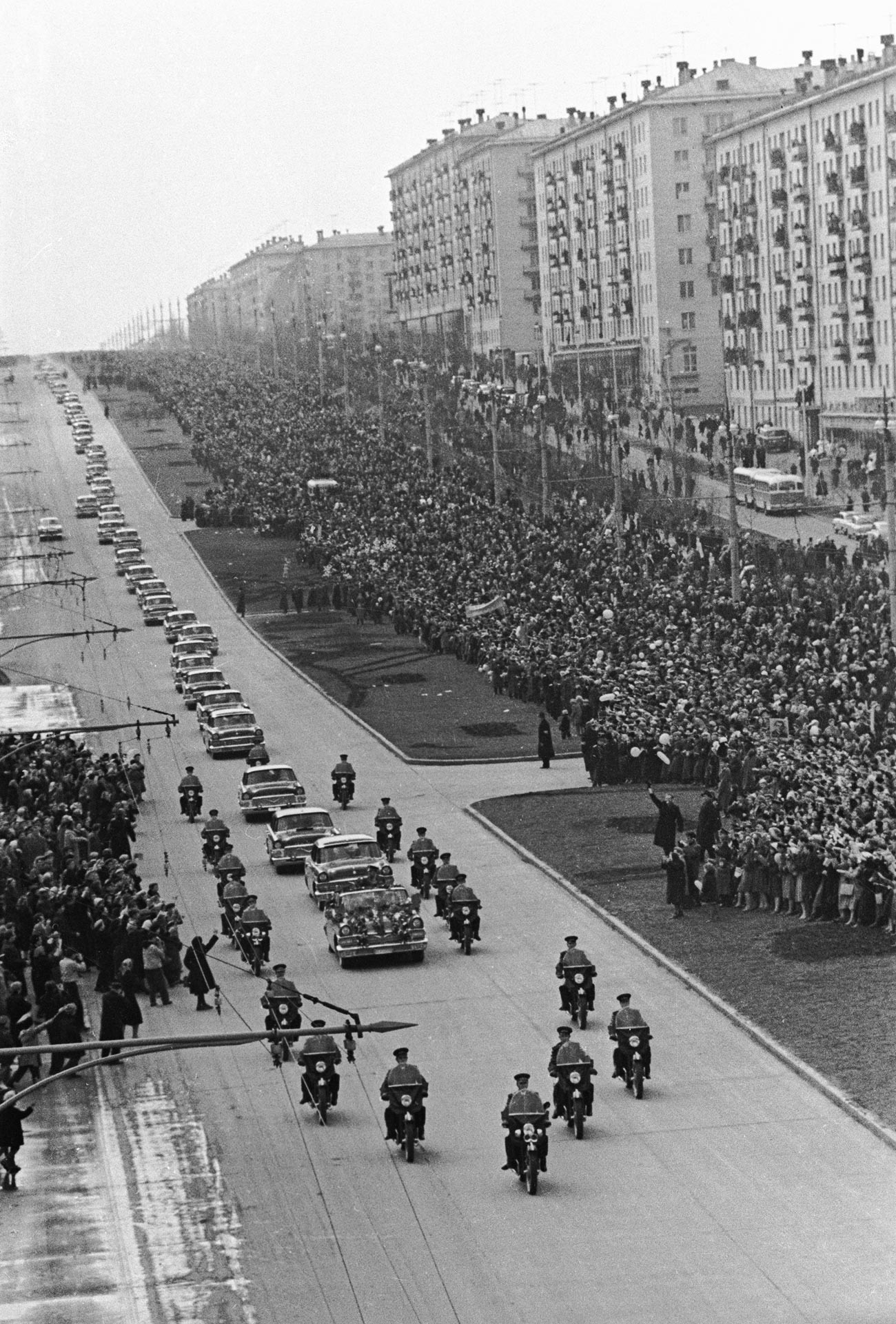 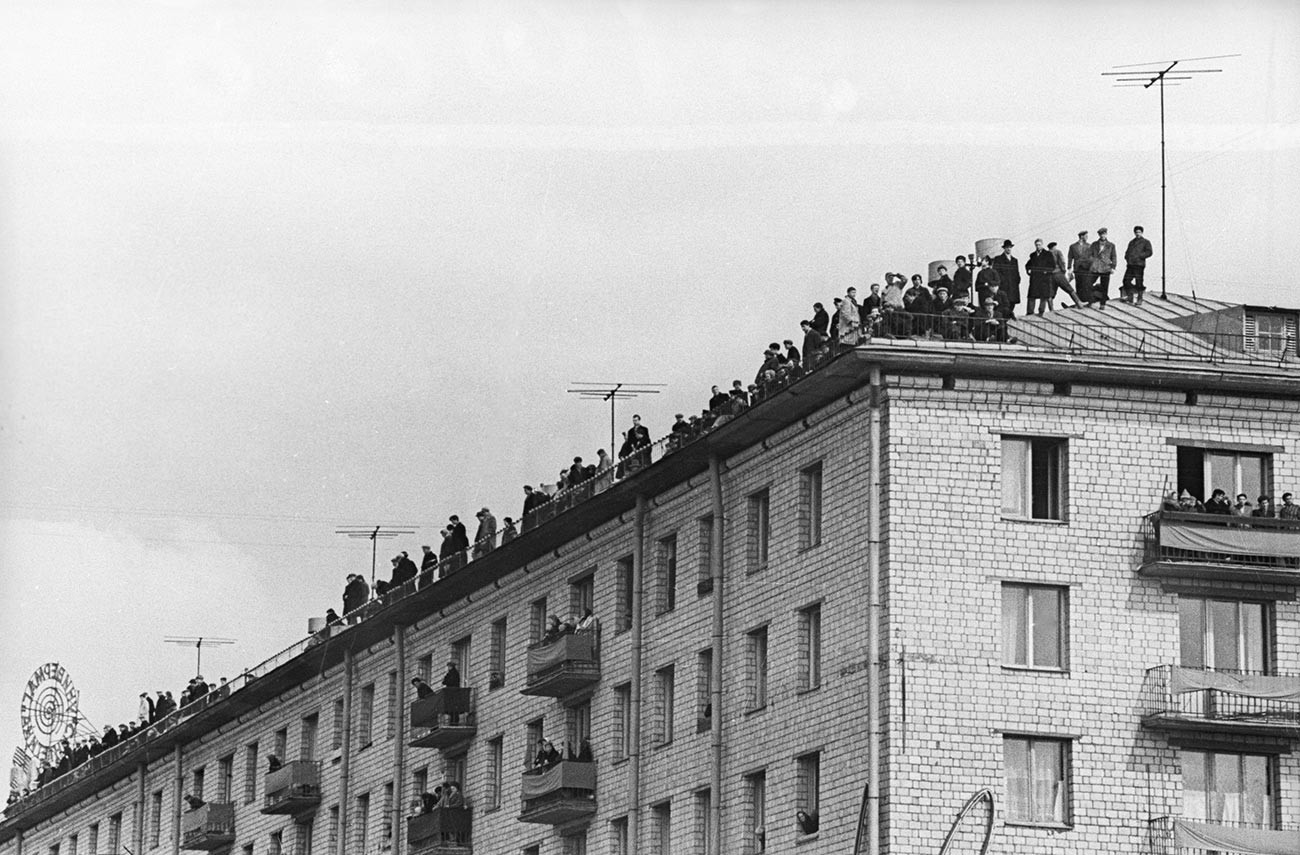 Helicopters drop leaflets over the city hailing the hero cosmonaut 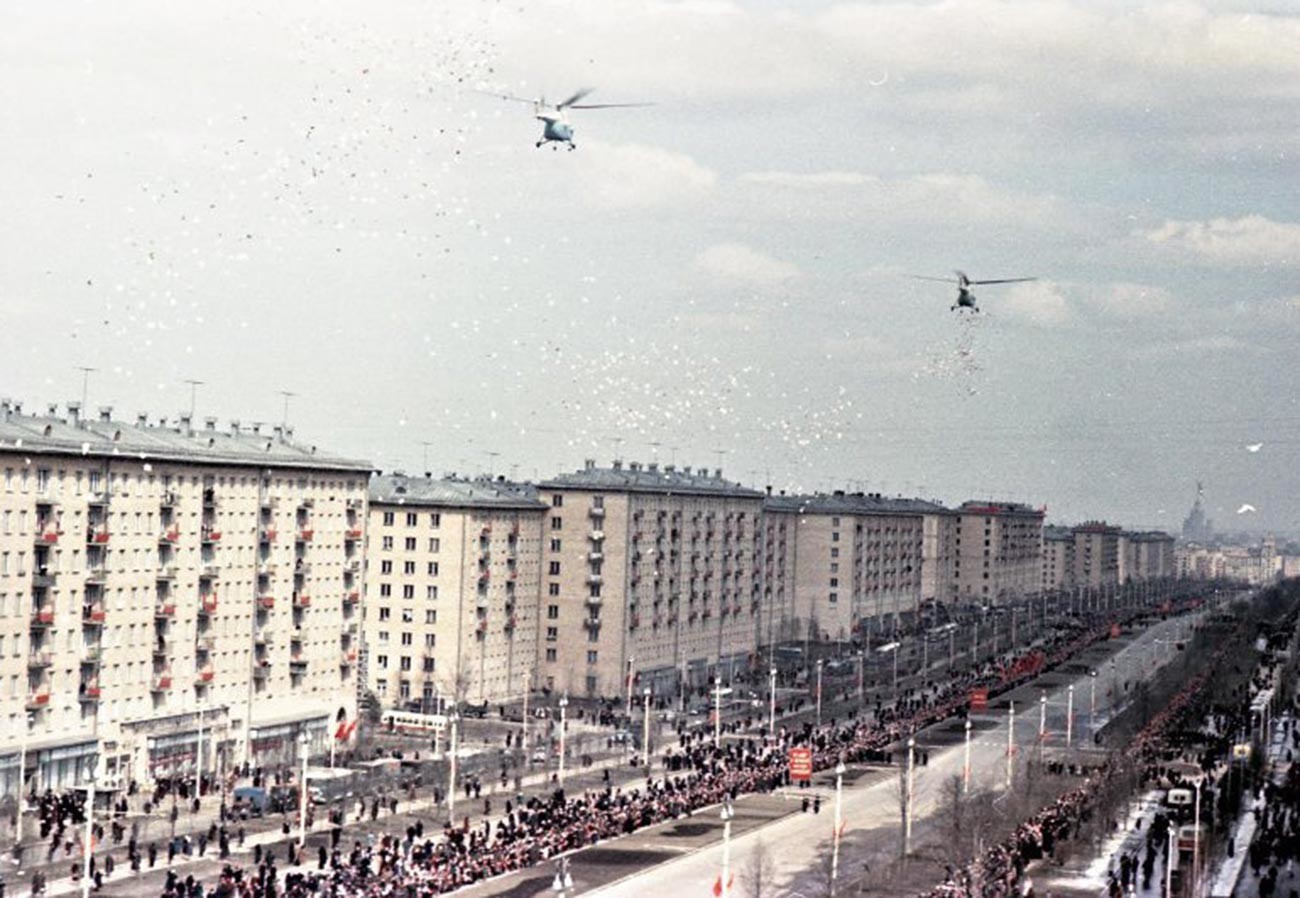 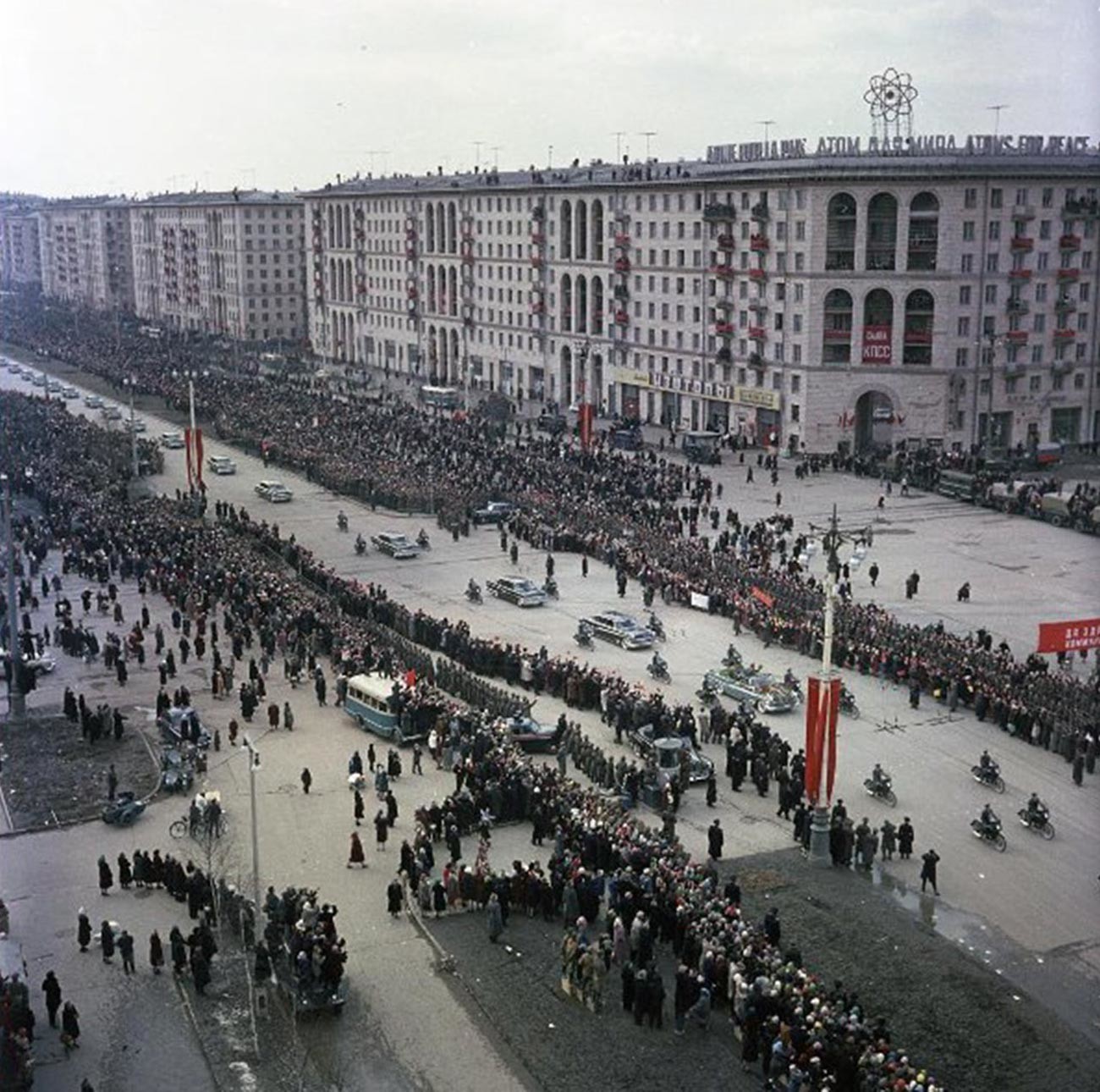 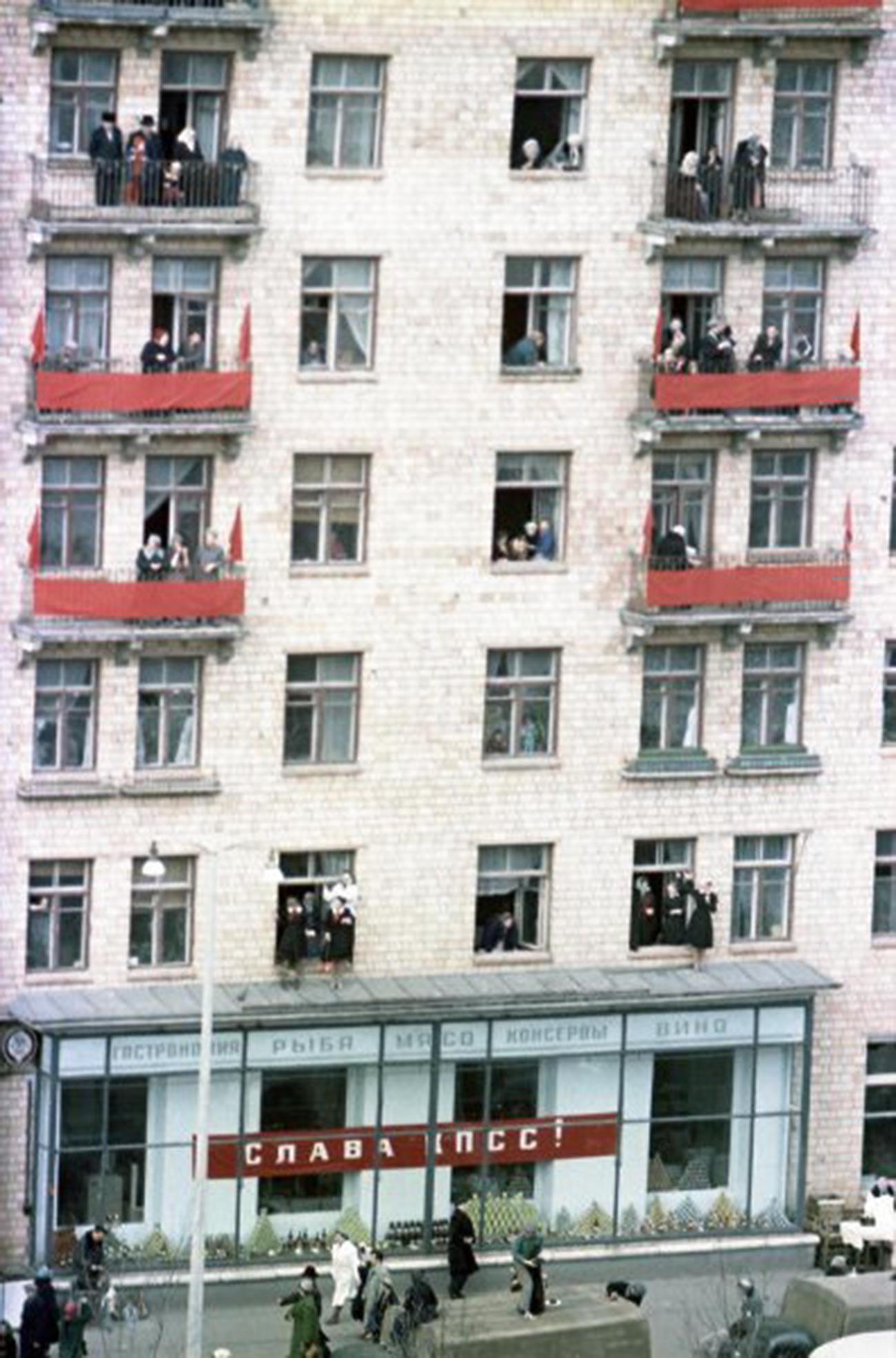 A huge crowd with banners awaits Gagarin on Red Square

Gagarin greets the crowd from the podium of the Lenin Mausoleum 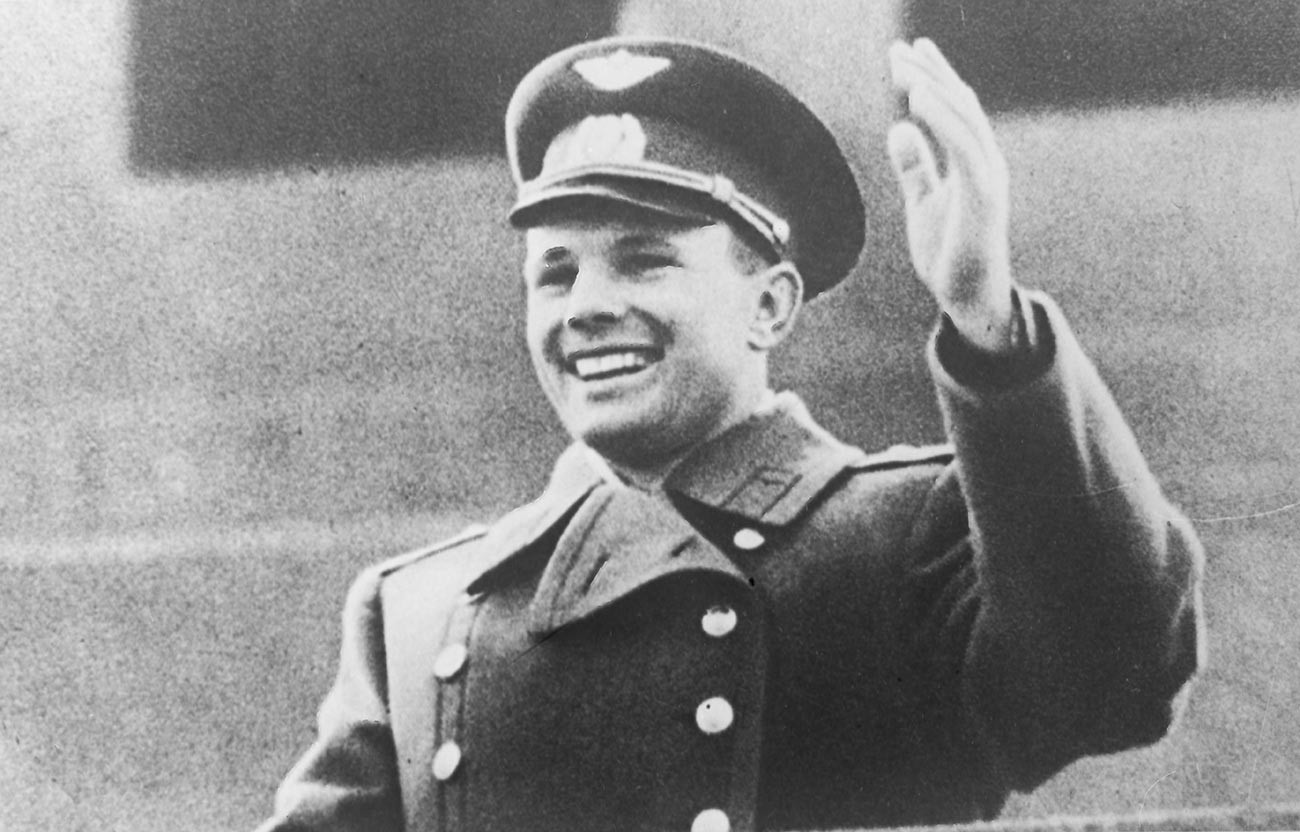 The official welcoming of Gagarin on Red Square 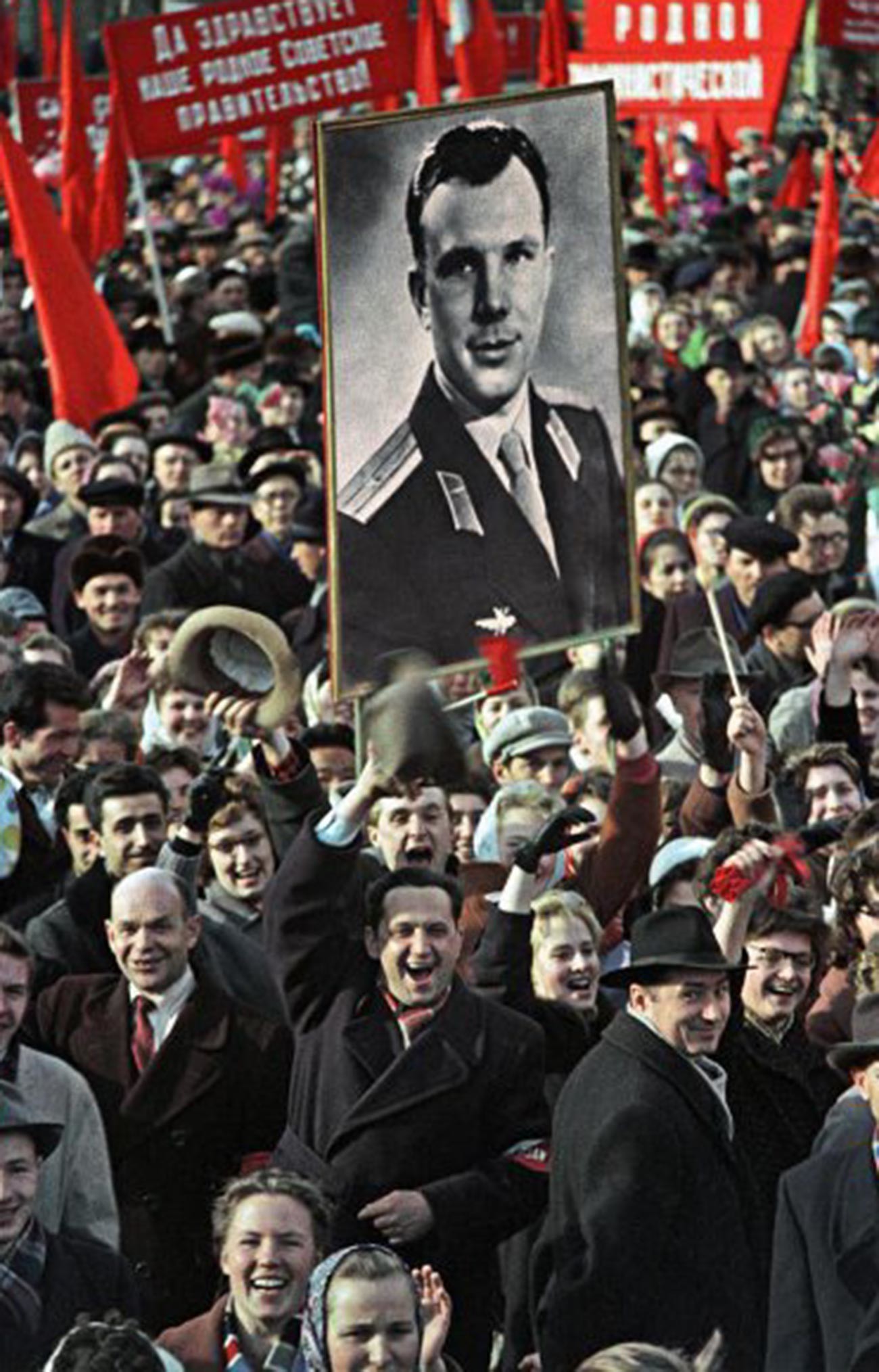 Journalist Pavel Barashev was one of the first to interview Gagarin after the flight, when the cosmonaut was finally taking some time off. He recalled the meeting as follows:

“We were told that Gagarin was undergoing a routine medical checkup and would be down shortly to answer questions from reporters from Komsomolskaya Pravda. We were literally shaking with excitement: now we would get to see and talk to the most famous person on planet Earth. What should we ask the world’s first man in space? Would we have time to take at least one picture?

In no time at all, he appeared in front of us: not tall, stocky, in his air force uniform with epaulettes.

‘Well, are there any Komsomolskaya journalists here?’ he asked so simply and with such a smile that all the unbearable tension of that tough yet joyous reporting day suddenly dissipated...”

Having rested, Gagarin made a full tour of the Soviet Union, giving speeches, attending meetings and signing endless autographs. 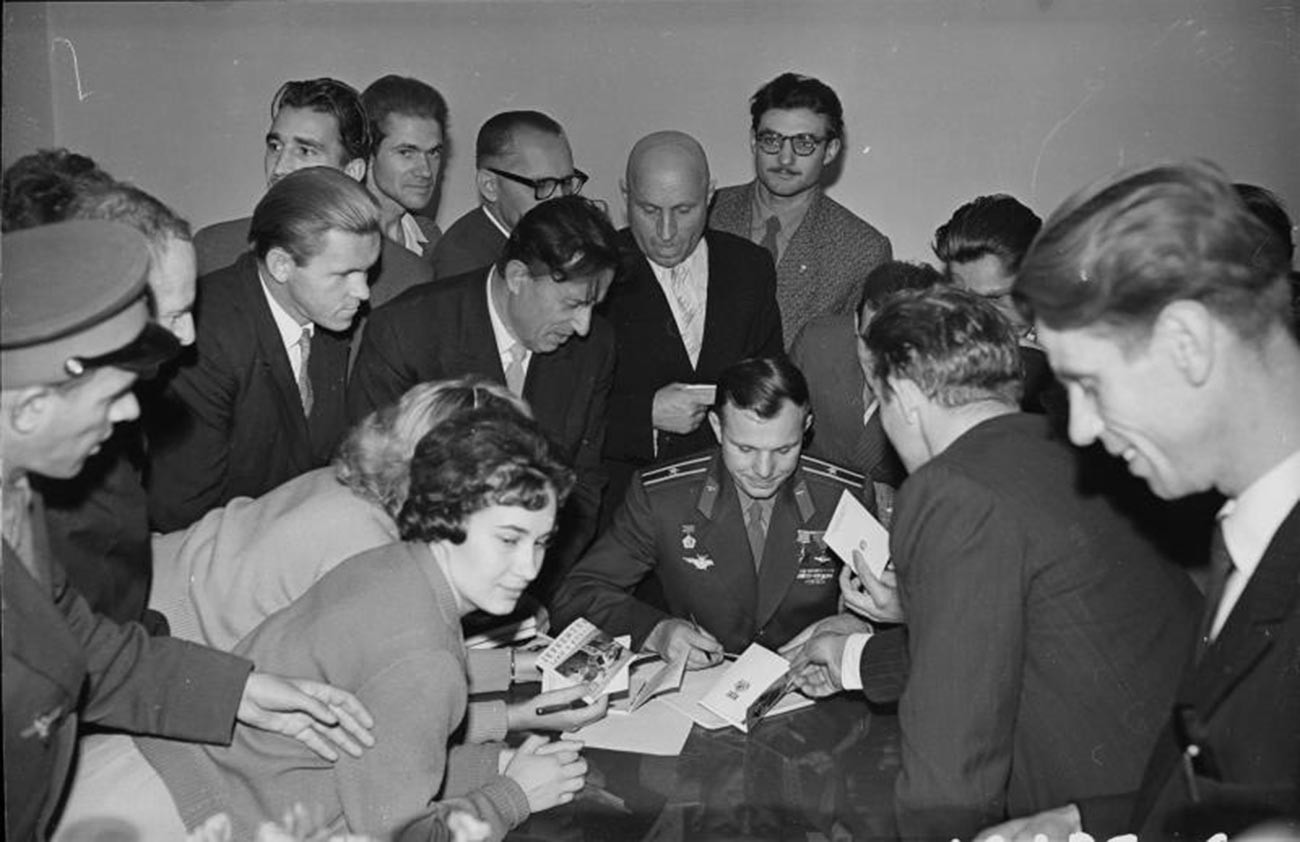 Gagarin at the Stankolit plant in Moscow 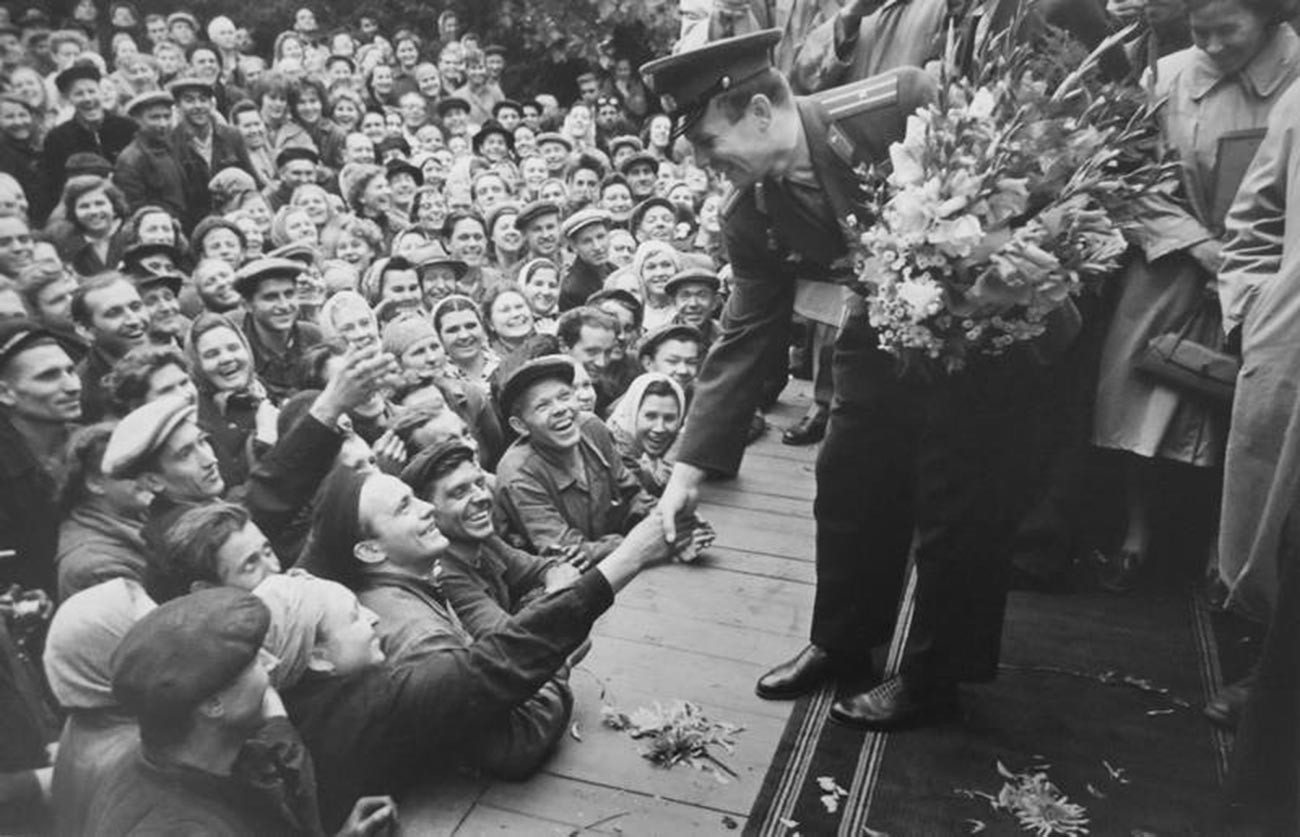 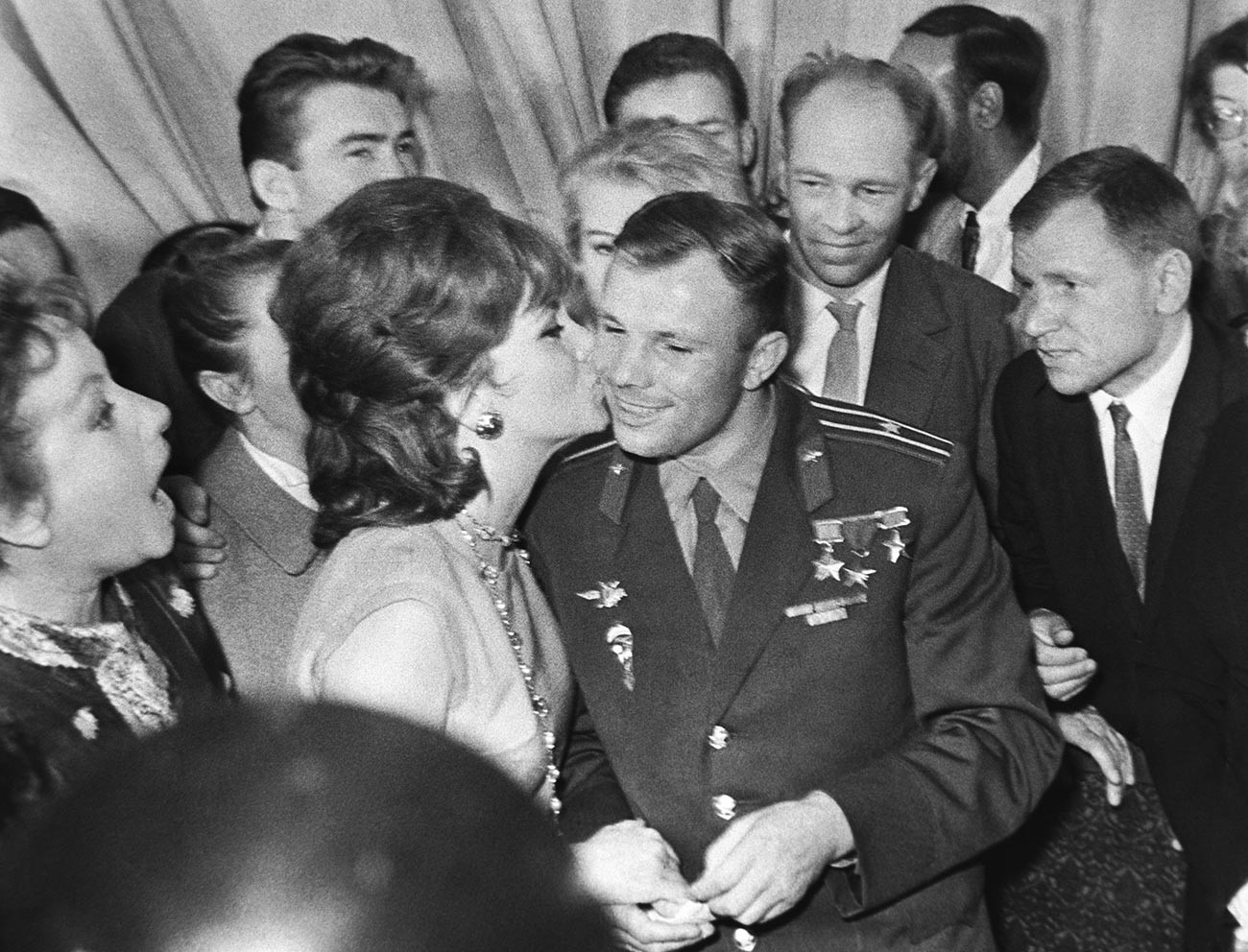 In the spring of 1961, Gagarin embarked on a world tour, visiting more than 30 countries; literally everyone from Cuba to Japan wanted to see him in the flesh. The US was one of the few countries that did not extend an invitation to the cosmonaut. The pilot was no longer his own man, but a media personality; at all times he had to “keep face” and please onlookers with his trademark smile.

Air Force Colonel General Nikolai Kamanin, who accompanied Gagarin on foreign trips, recalled: “Almost all newspapers noted that Gagarin’s trip proved how great a man he is. Every day I talked with this great man in the midst of unprecedented luxury and splendor, and saw that he just wanted to relax, alone, somewhere with a fishing rod on a river outside Moscow...” 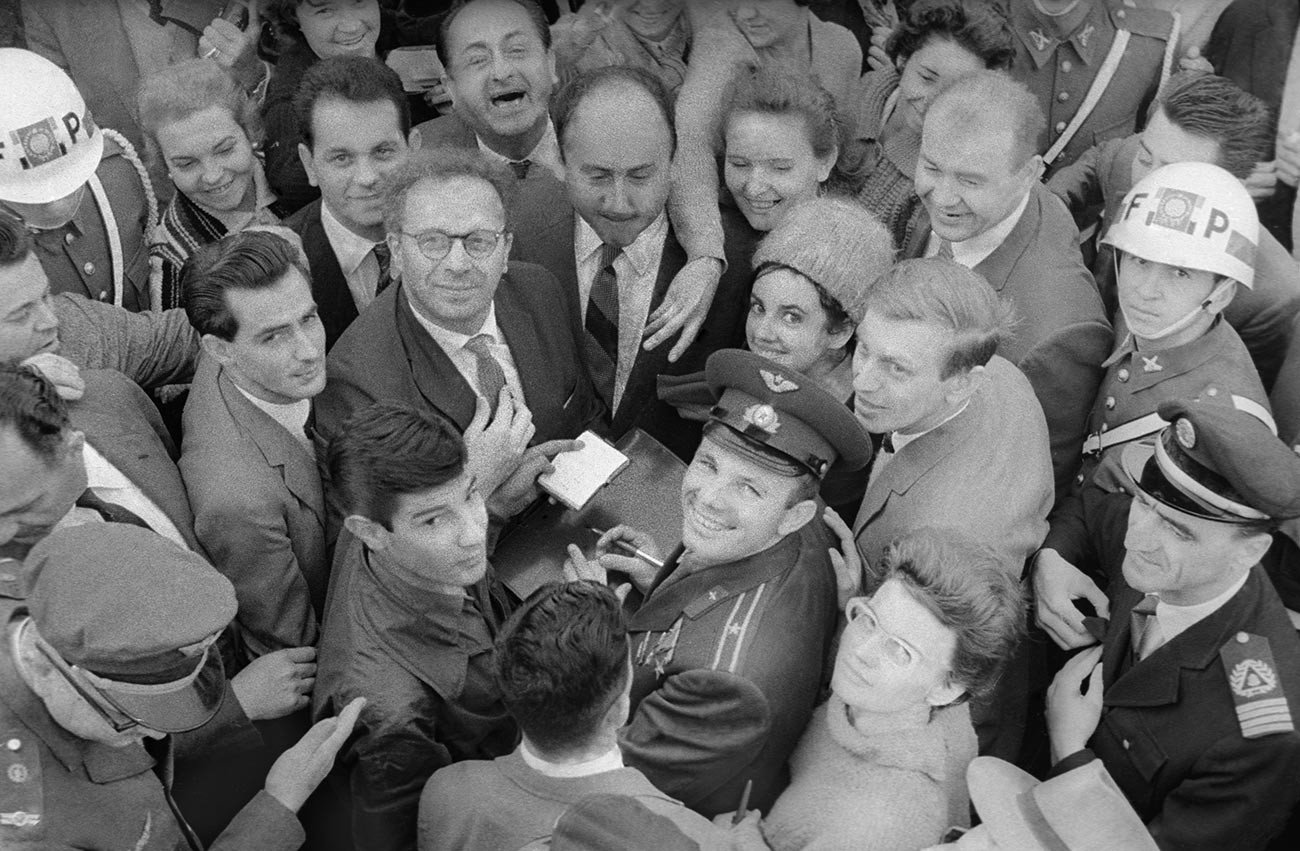 Residents of Havana welcome Gagarin during his visit to Cuba 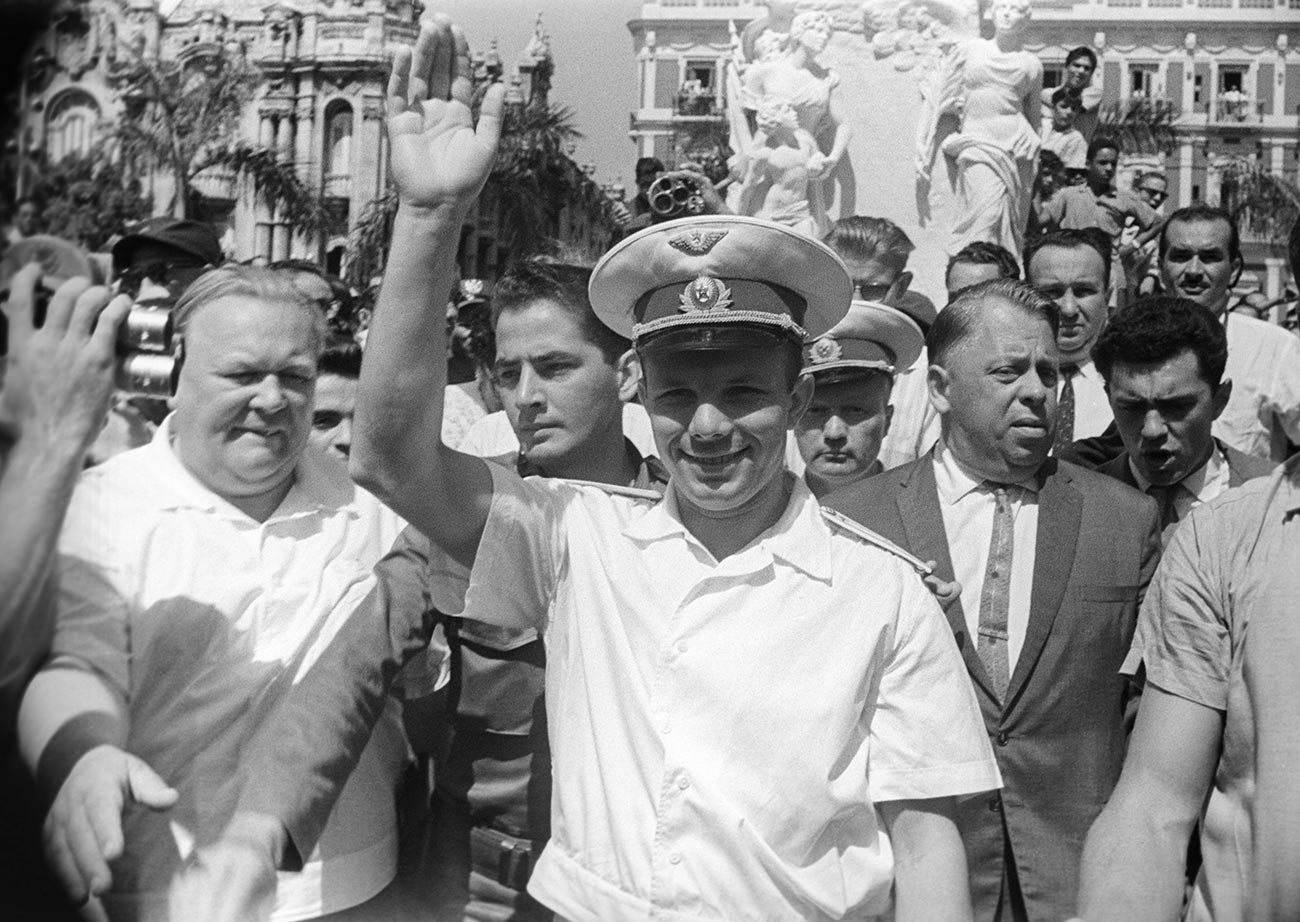 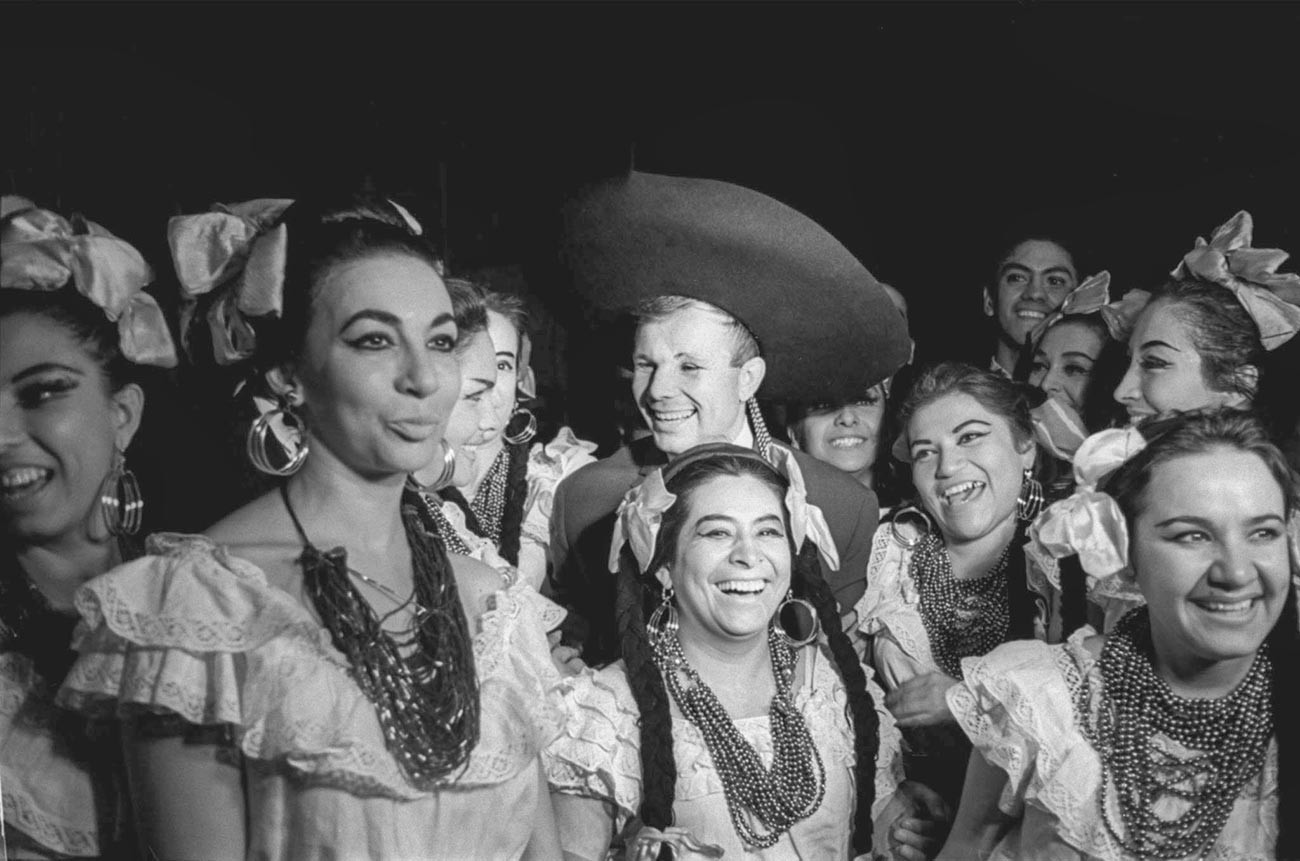 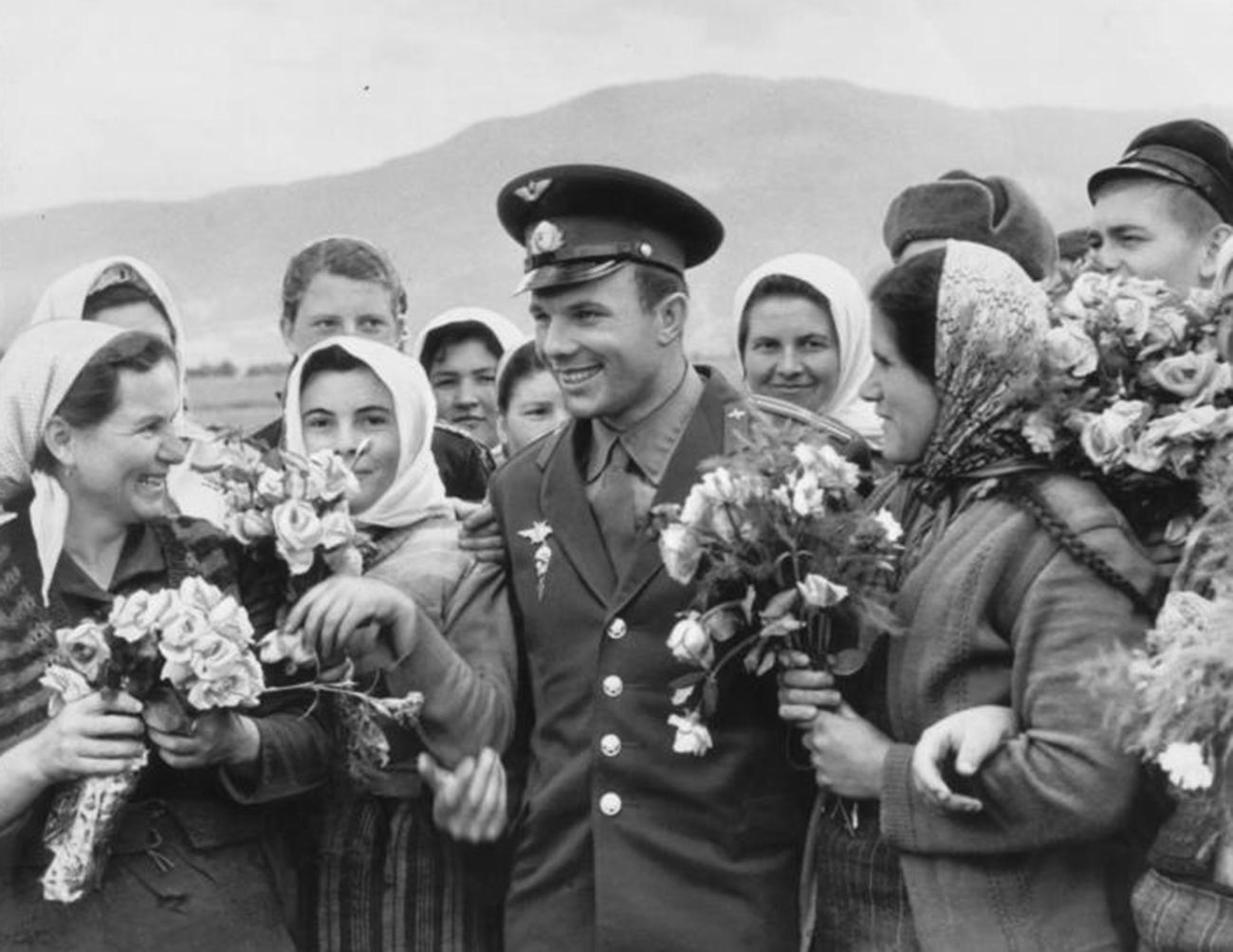 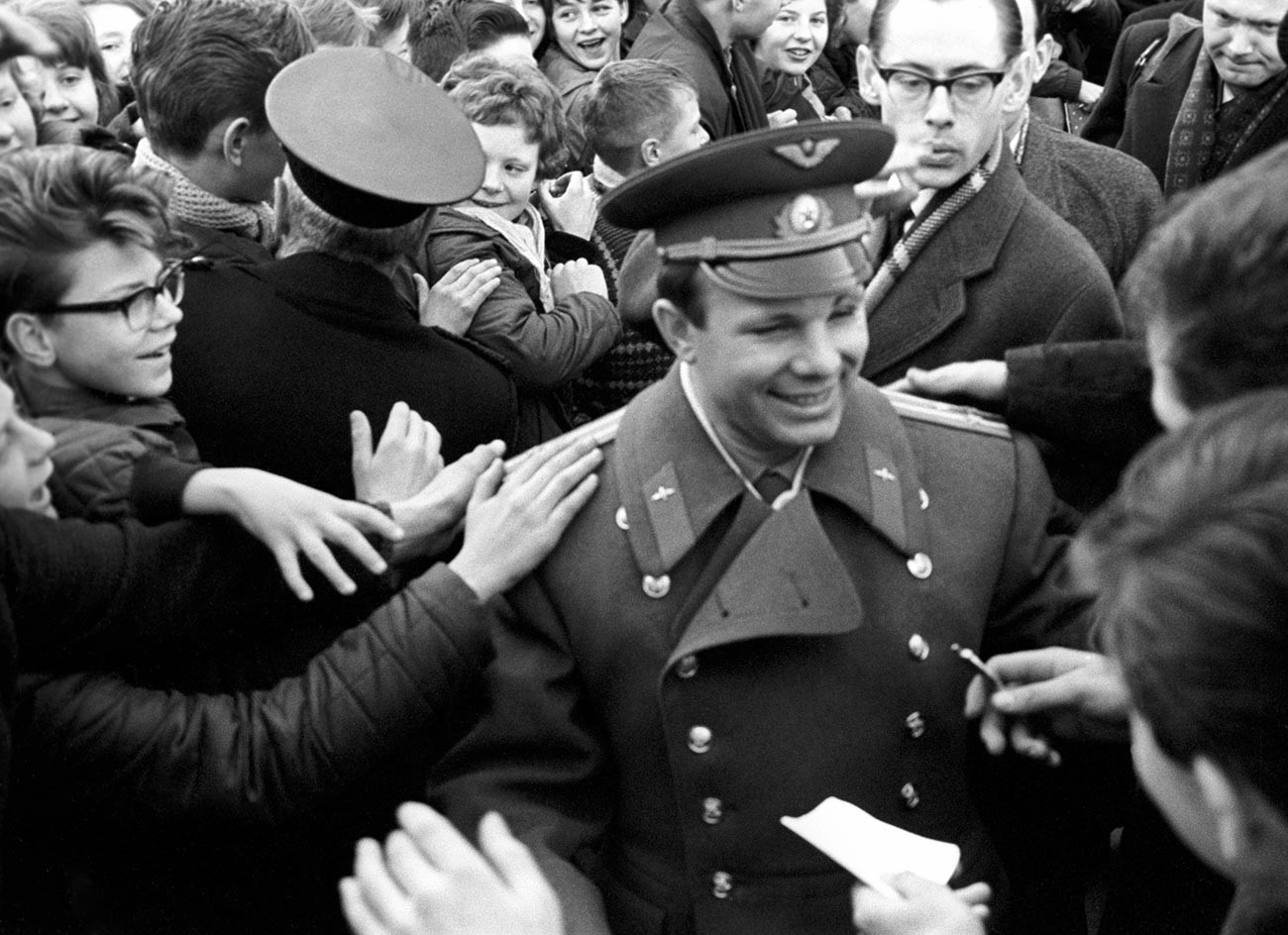 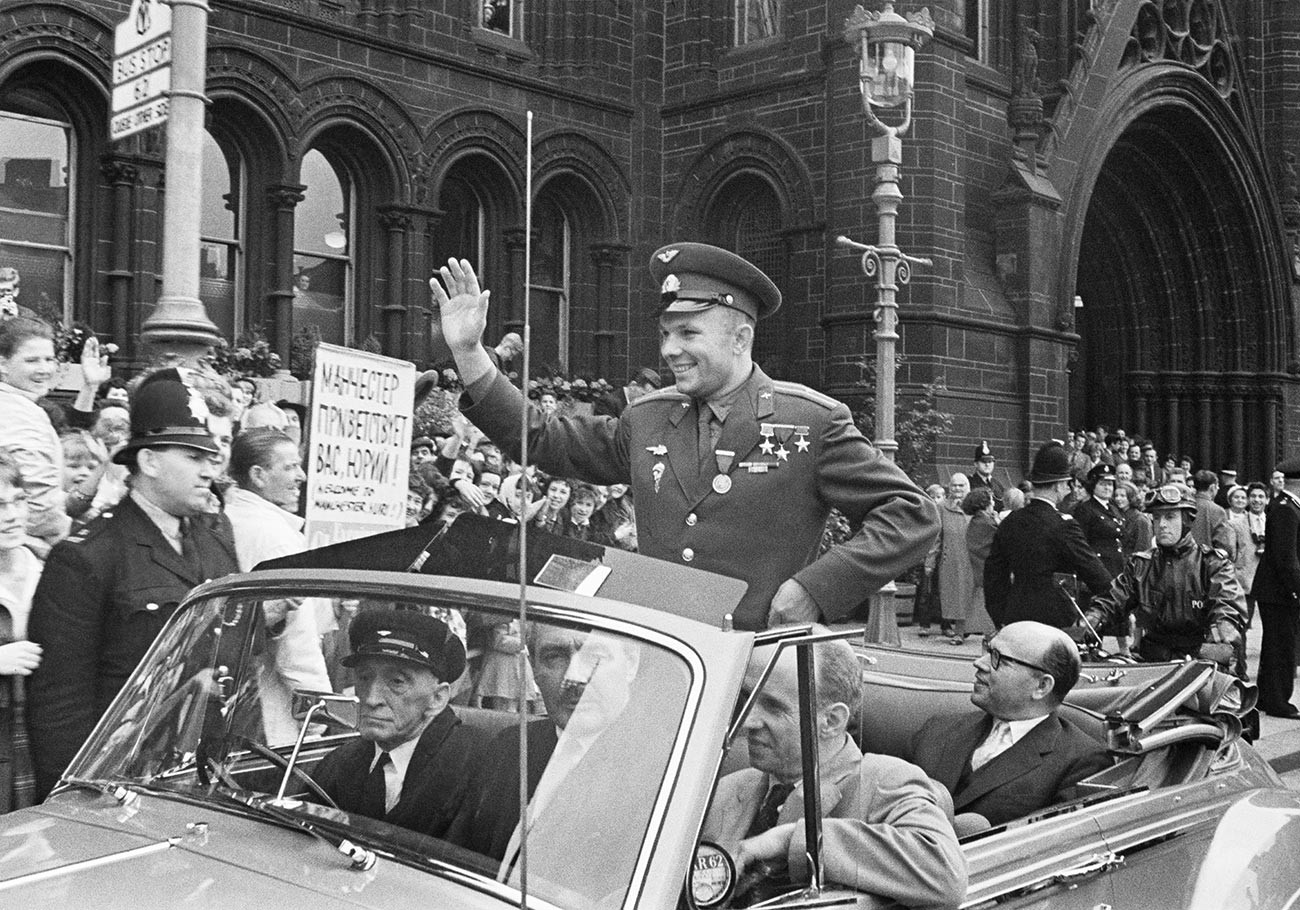 During his stay, Gagarin visited the Tower of London 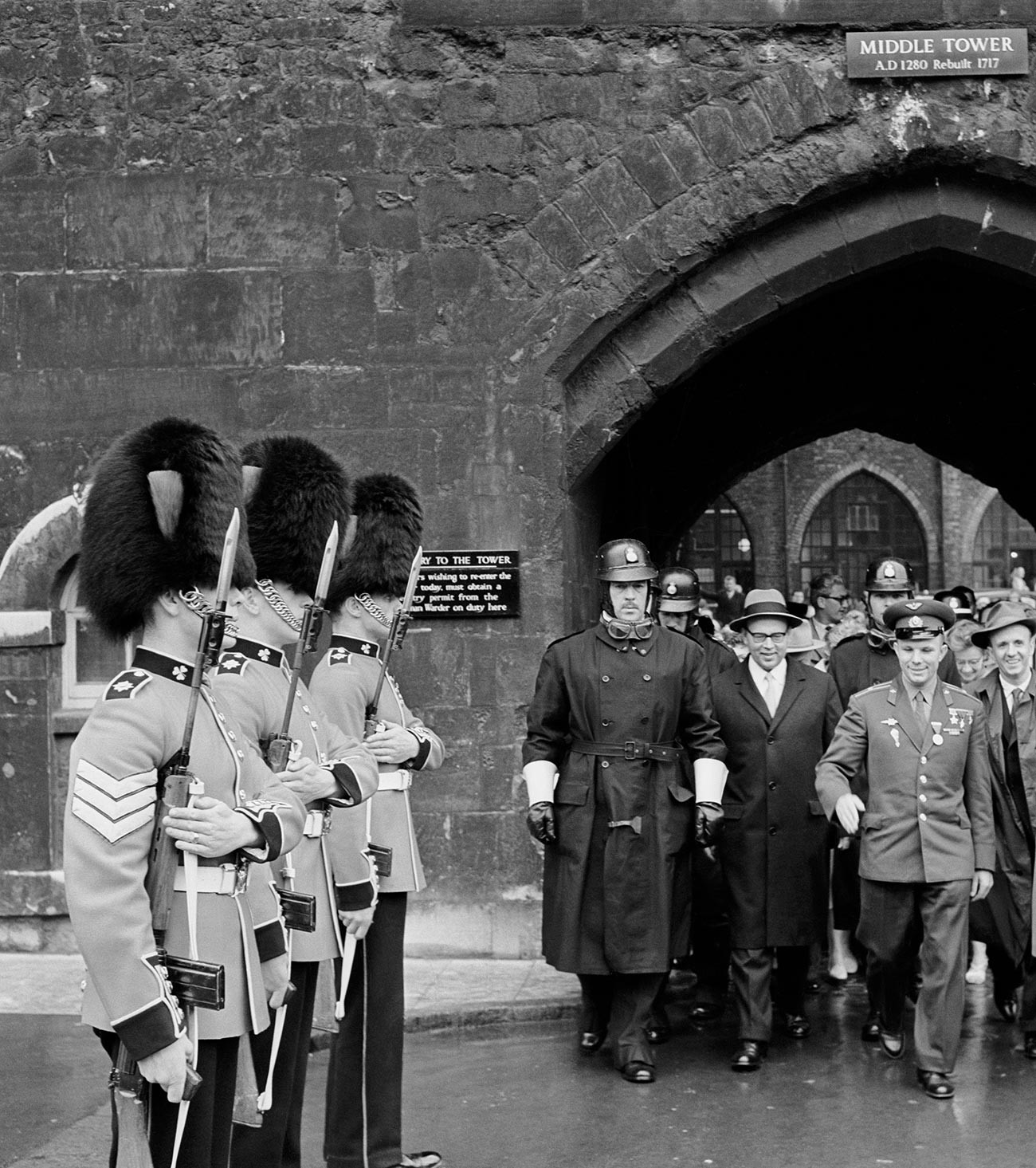 Gagarin also met Elizabeth II, who recently shared her impressions of their meeting, saying that he was very charming although he couldn’t speak English at all.

This is how Gagarin himself recalled the meeting: “I had breakfast with the queen at Buckingham Palace. How about that! The queen was very courteous and well-mannered. We talked about the weather, about space and about my impressions. I talked to [Prince Philip] about aviation and new cars... I gave the queen a book. She was very happy. In return, she presented me with a family photo.” 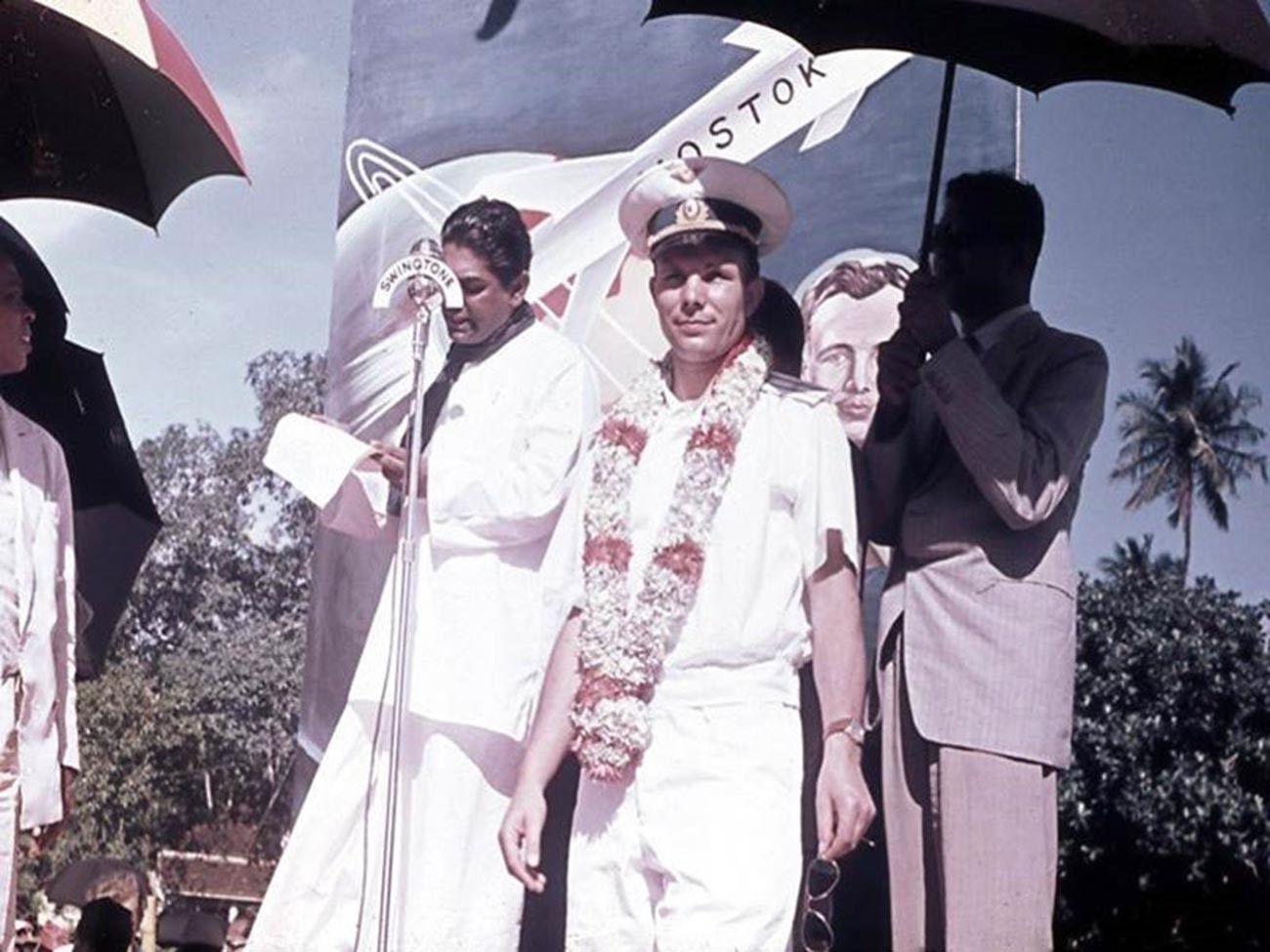 Gagarin at the Paris International Air and Space Show 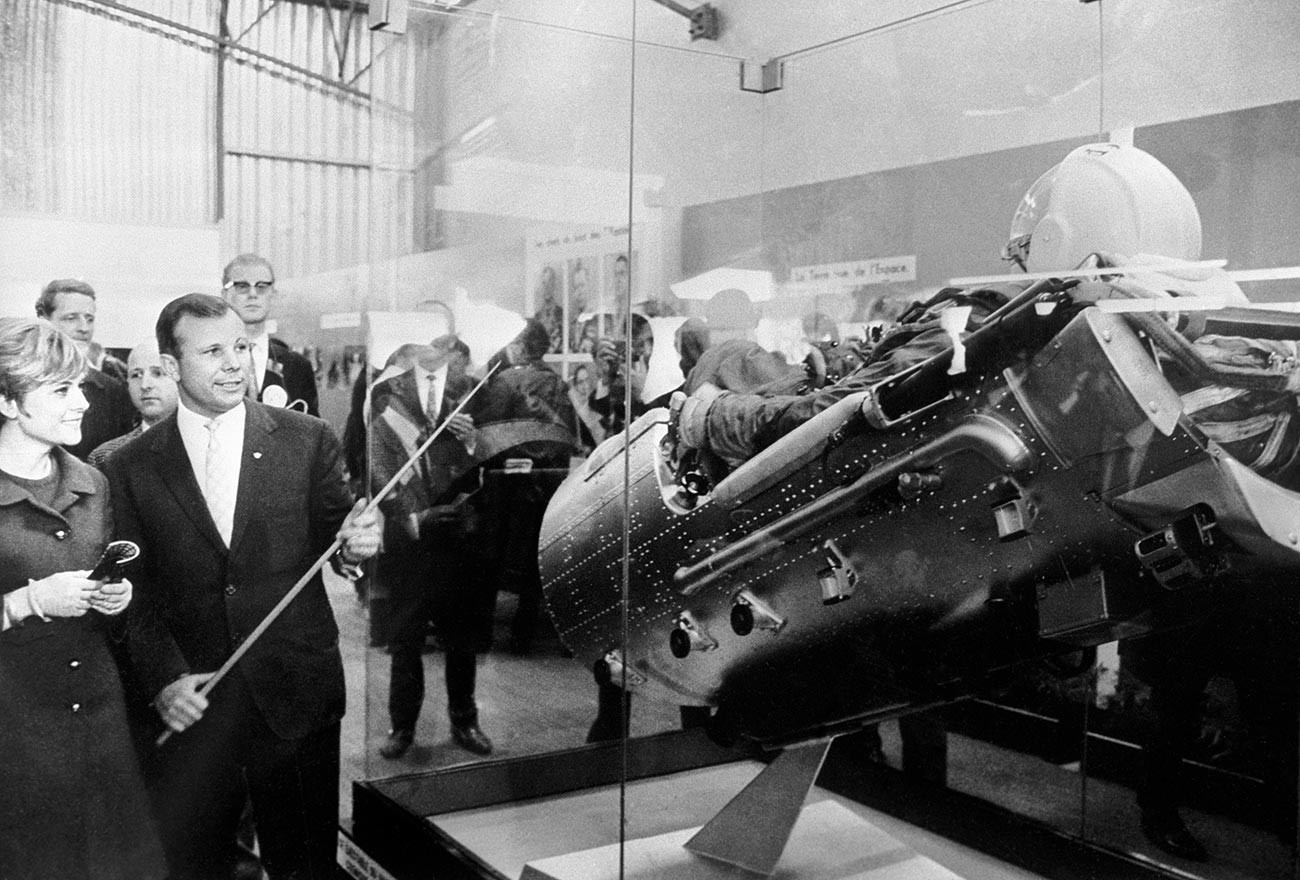 Gagarin was enormously popular everywhere. Eyewitnesses recall that everyone, young and old, literally lived and breathed space, and dreamed of meeting the world’s first cosmonaut. As for Gagarin himself, he remained modest about the fame and glory that had fallen into his lap.

“Like others, I have made a lot of mistakes. I have my weaknesses. No one should be idealized. Everyone should be accepted as they are in real life. Sometimes I feel like a cuddly toy, a goody two-shoes, it makes me nauseous,” he wrote in his diary.

Also, check out our YouTube video about popular Gagarin-related myths!