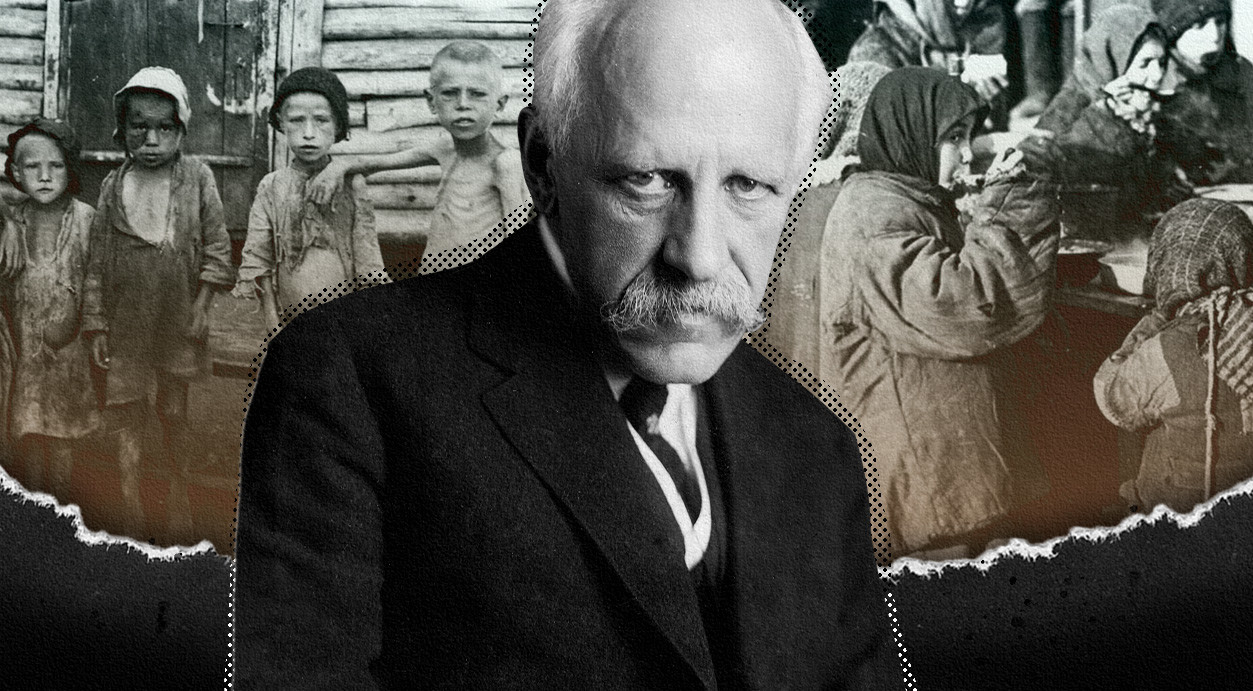 Considered one of the most famous Norwegians in history, Fridtjof Nansen made a huge contribution to the exploration of the Arctic, becoming an inspiration and role model for a generation of polar explorers. He also made major strides in zoology and oceanography and became the first man to cross the Greenland ice cap on skis.

However, Nansen earned international fame not only because of his expeditions and scientific achievements. He was also famous for his humanitarian work, for which he was awarded the Nobel Peace Prize in 1922. He helped World War I prisoners of war, refugees in post-war Europe and Armenians who fled from the genocide in Turkey. Nansen also did a lot to help people starving in Soviet Russia in the early 1920s. 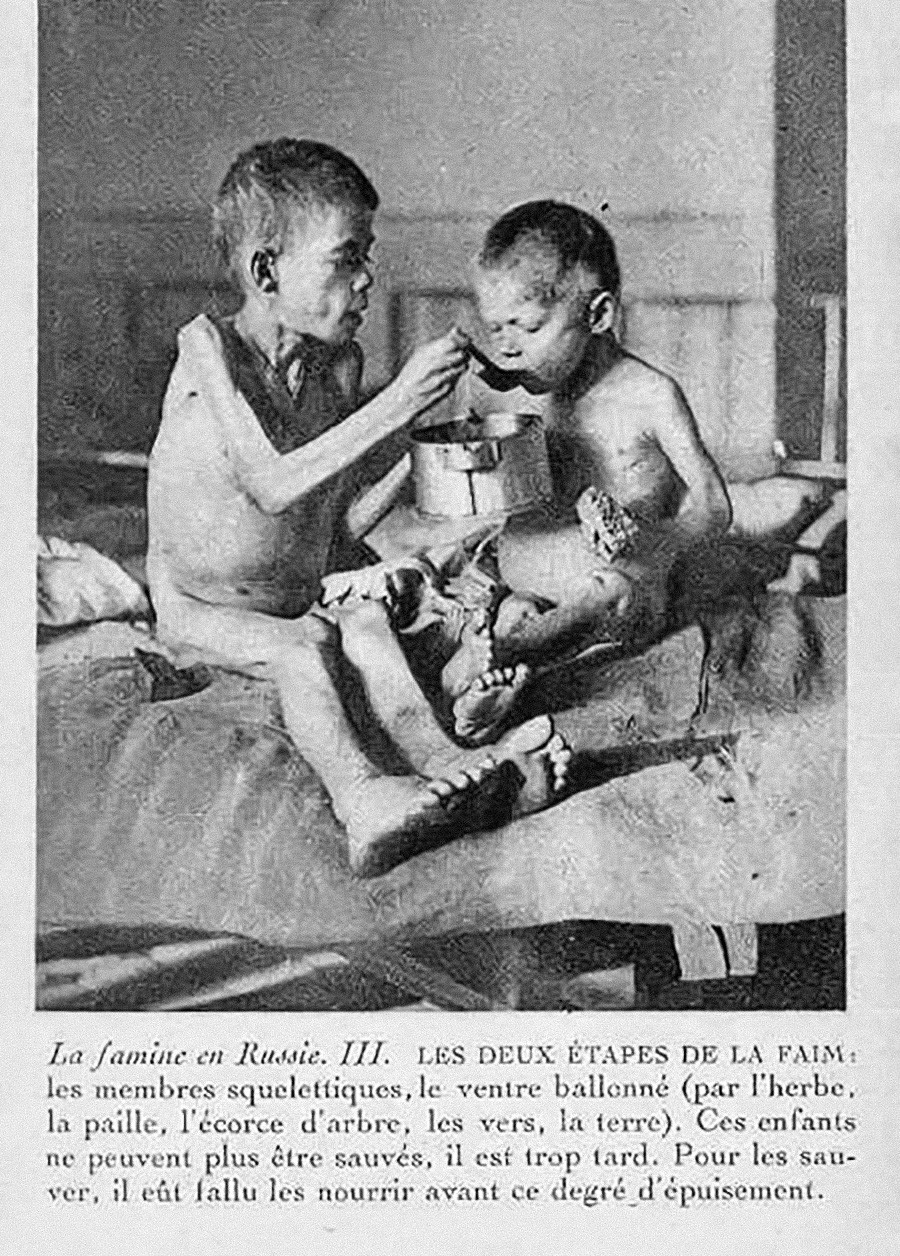 Starving children during a famine in Soviet Russia. A photo by Nansen.

The main causes of the terrible famine of 1921-1922 were the Civil War, which had disrupted all economic ties in the country, and a severe drought, which had destroyed a fifth of all crops. Things were not helped by the Soviet government either, which despite the already difficult situation, stepped up its efforts to requisition grain from peasants.

As a result, famine struck large parts of the country with a population of over 90 million people: from the steppes of Kazakhstan and the Ural Mountains to the Volga region, southern Ukraine and Crimea. “The huts stood abandoned, without roofs and with windows and doorways as empty eye sockets. The thatched roofs had long been removed and eaten. Of course, there was not a single animal left in the village - no cows, no horses, no sheep, no goats, no dogs, no cats, not even crows. All had been eaten. A deathly silence was hanging over the snow-covered streets,” recalled sociologist Pitirim Sorokin, an eyewitness to those events. 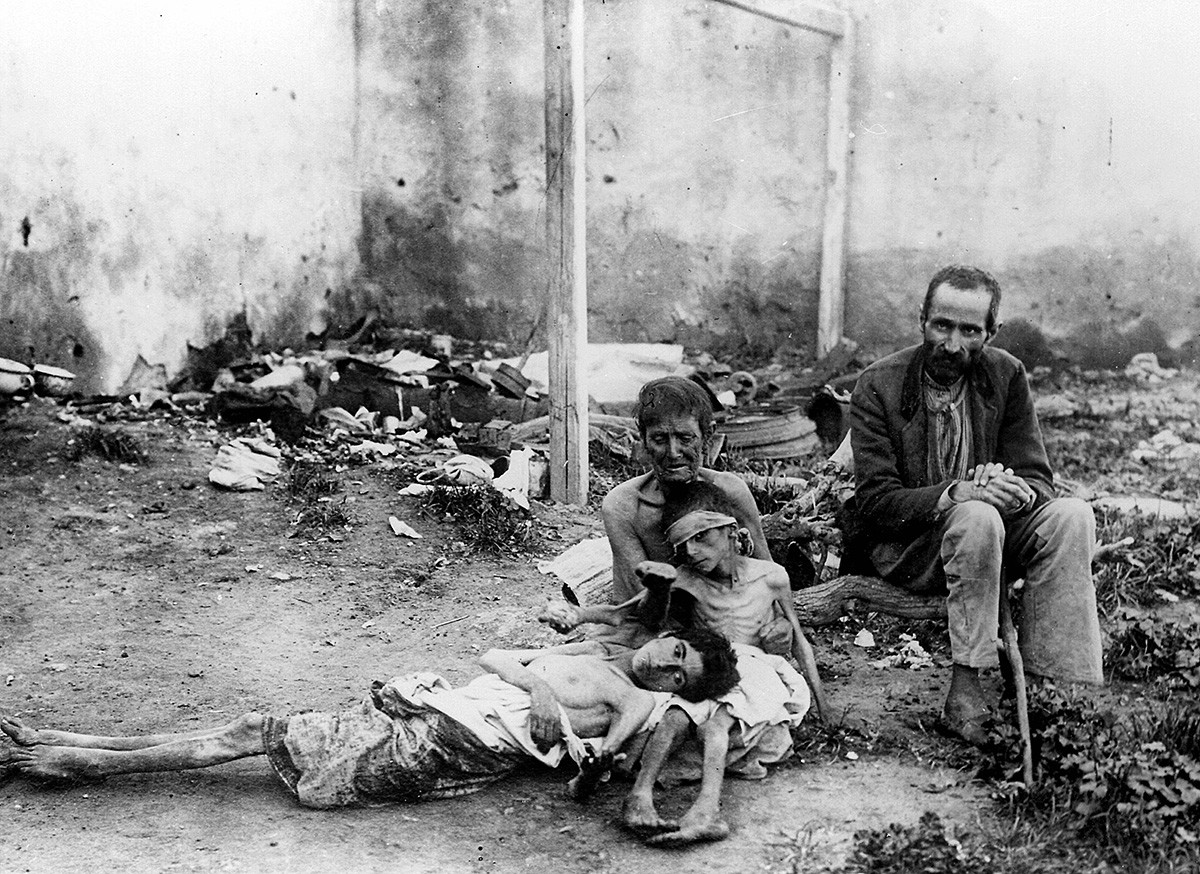 A couple with their starving children during a famine in Soviet Russia.

Meanwhile, the Soviet leadership was beginning to lose control of the situation. People were fleeing the country en masse, mortality was skyrocketing and cannibalism was becoming widespread. Having long concealed the real state of affairs in the country, in the summer of 1921, the Bolsheviks were forced to publicly appeal to the world community for help. And help came.

For the West and Soviet Russia, with their mutual hostility and distrust, to agree on the organization and conditions for the provision of aid, a person was needed who had a lot of clout and enjoyed the respect of both sides. That person was Fridtjof Nansen, who had by then abandoned his Arctic expeditions for age reasons and had focused on humanitarian work under the auspices of the League of Nations. He headed the newly established International Relief Committee to Russia, also known as the ‘Nansen Mission’.

In the fall of the same year, Nansen visited Russia to assess the scale of the famine. “The most horrible thing was our visit to a cemetery, where there was a pile of 70 or 80 naked bodies, mostly of children who had died in the past two days and were brought there from orphanages or simply picked up on the streets,” the Norwegian recalled in horror. “Gravediggers could not cope with burying such numbers of the dead, because the ground was frozen and it was very difficult to dig, so the bodies were just piled up. In addition, many corpses were left lying in the streets and in people’s homes, because it was impossible to take them to the cemetery.” 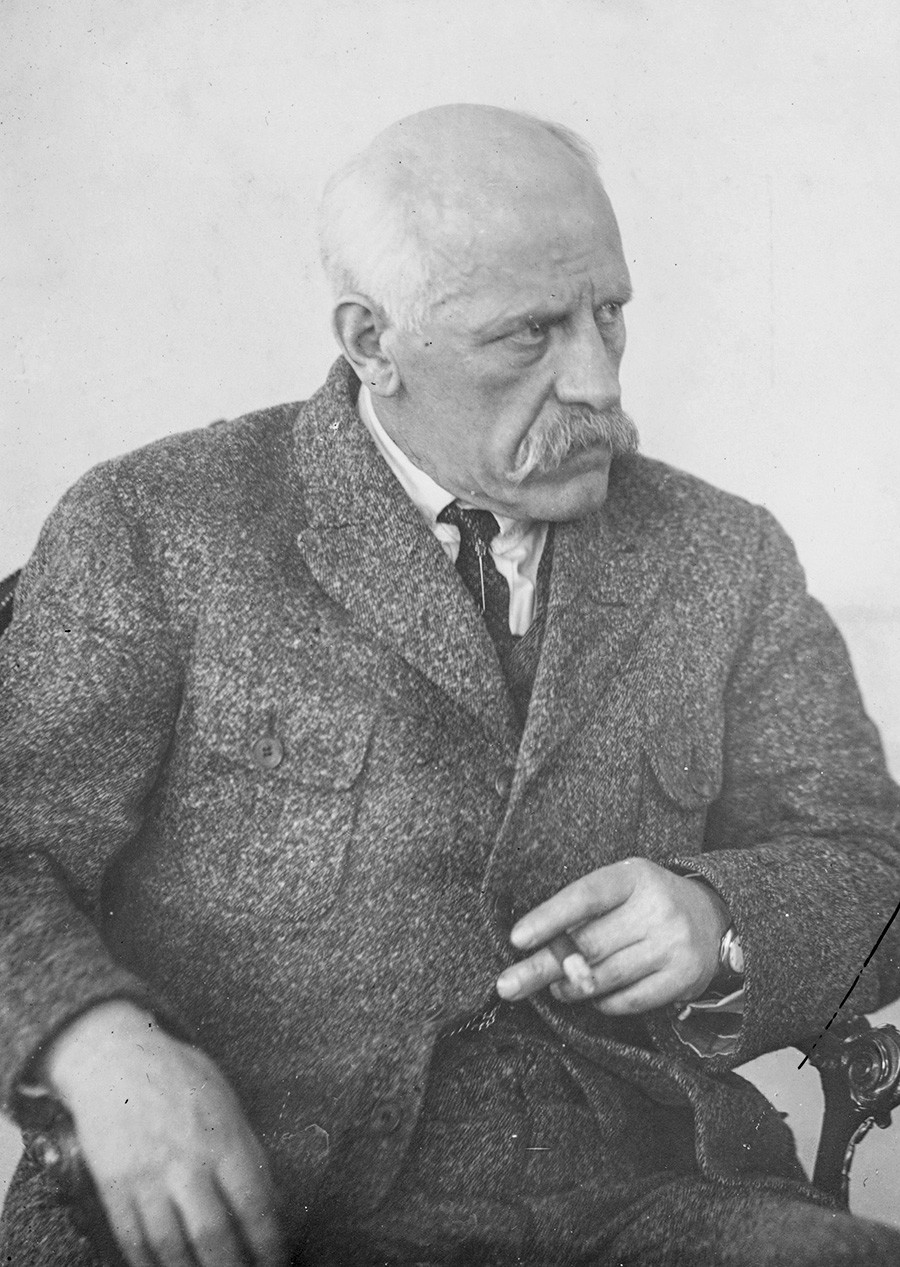 Fridtjof Nansen in Russia in 1923.

Having returned from Russia, Nansen made a number of trips to European countries and the United States, where he showed harrowing photographs and called for assistance to the starving not only from heads of state, but also from the general public. As a result, the Nansen Mission attracted more than 30 charitable organizations that became actively involved in the fight against the famine. They included the International Save the Children Union, the Society of Friends (Quakers), the International Red Cross and a number of its regional offices.

Hundreds of members of the Nansen Mission traveled to Russia. Free canteens were opened at orphanages, railway stations and factories in the worst affected parts of the country (the Volga region and Ukraine). Field kitchens, 210 of which had been donated to the Nansen Mission by the International Save the Children Union, were dispatched to villages. Each of them could feed several hundred people at a time. 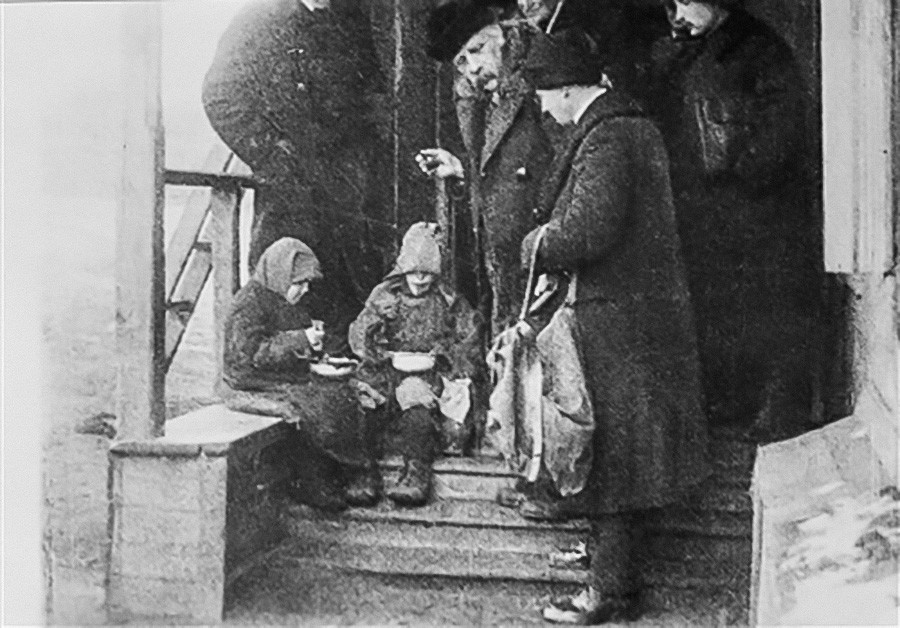 Each starving person received half a liter of soup and a little over 100 grams of white bread a day. In addition, the Mission staff distributed parcels sent by people in the West with flour, canned meat, raisins, rice, sardines, cocoa and other foodstuffs.

The committee steadily increased its supplies. For example, between March and May 1922, the amount of food supplies for the Volga city of Saratov alone increased by almost 150 percent. Overall, by the summer, the Nansen organization was feeding 1.5 million children and adults in Russia.

The Nansen Mission, however, was not the main charitable organization involved in famine relief in Russia in the early 1920s. The non-state American Relief Administration had much more resources and accounted for up to 90 percent of all food supplies coming into Russia as aid. 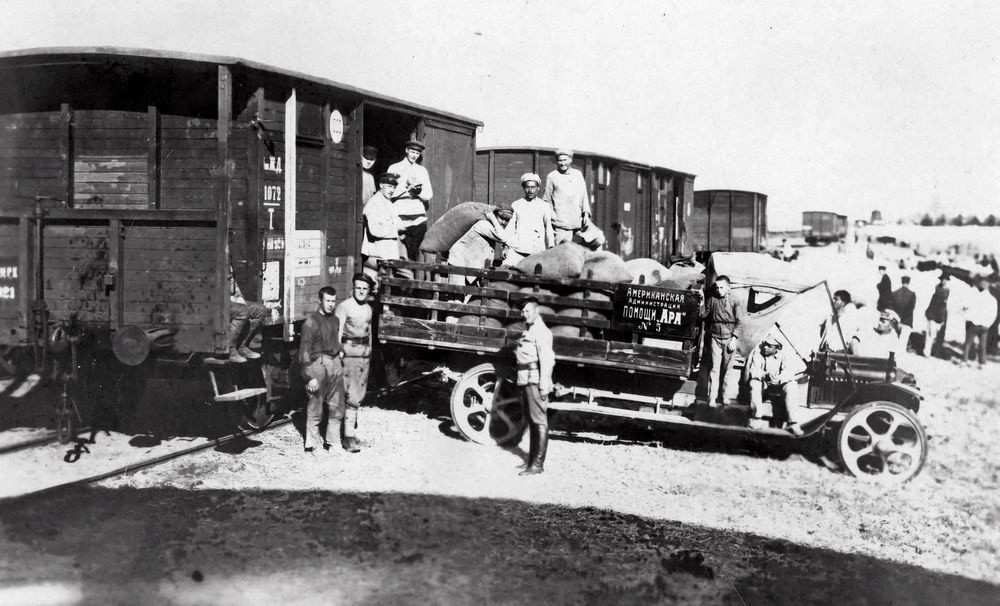 Nevertheless, of all the foreigners helping famine victims, it was Fridtjof Nansen who was the most popular among the Russians. He knew Russia and its people well, did not express open hostility to Bolshevism and advocated the normalization of relations between the Soviet government and Western leaders.

Fridtjof Nansen visited Russia several times to check how effectively his Mission was operating there. Once, he was asked whether he was afraid to drive around the Volga region gripped by famine and typhoid. He replied: “I’ve seen it worse. And here, good people are suffering so badly.”