How the Soviet Union planned to crush NATO in a week 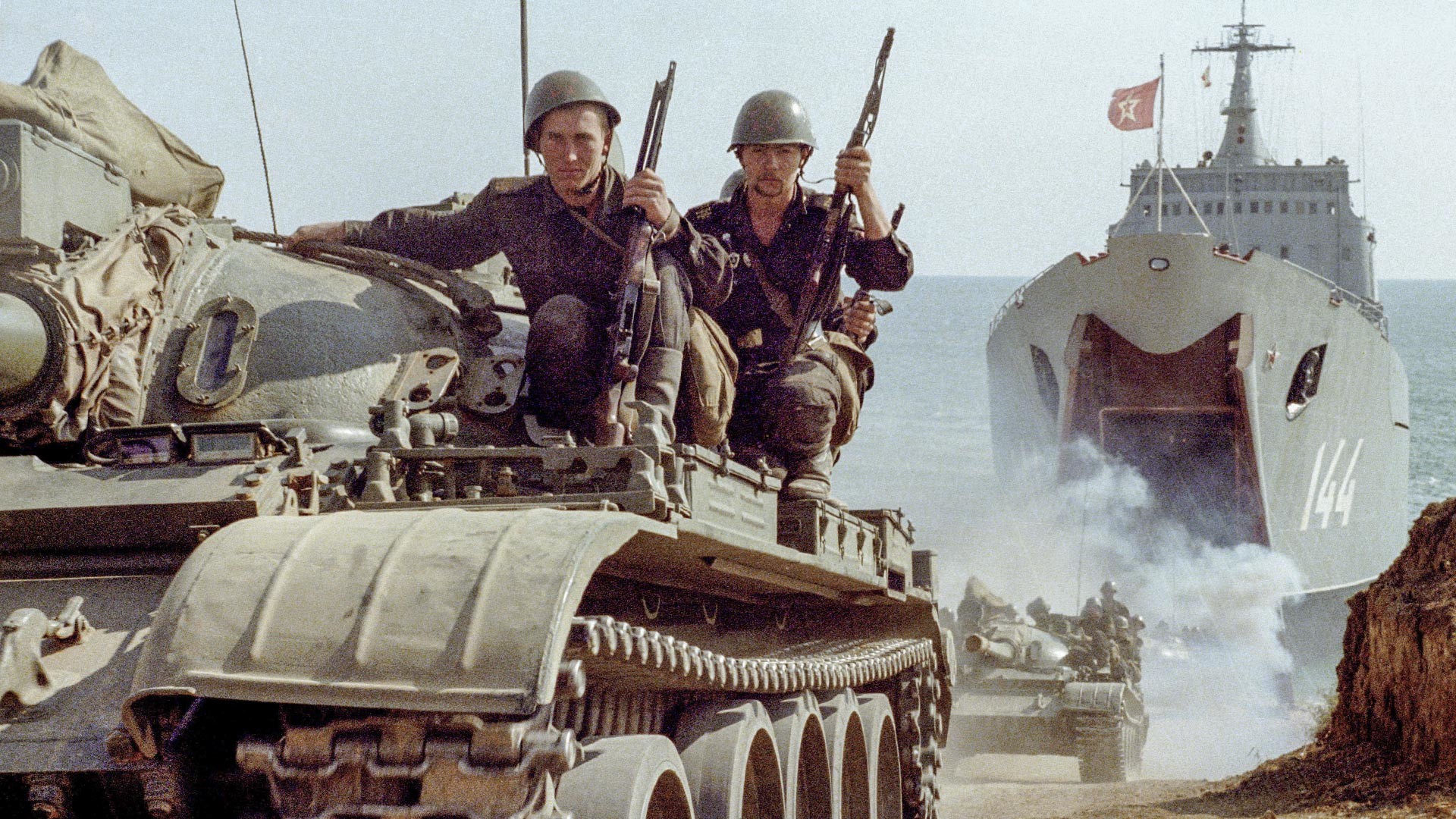 The Black Sea Fleet in exercises.

Mikhail Kuhtarev/Sputnik
Moscow was sure it could break its main enemy and still avoid the outbreak of a full-scale nuclear apocalypse.

During the Cold War era, two rival superpowers - the USSR and the U.S. - were at any second ready for the outbreak of a hot war between them. Everybody was sure World War III would be the nuclear one and would ensure a mutually assured destruction (MAD).

However, in 1979, the Soviets developed a plan on how to crush their bitterest enemy and avoid the general nuclear apocalypse. The ‘Seven Days to the River Rhine’ plan (which was only made public by the Polish Defense Ministry in 2005) promised that NATO forces in Europe would be smashed in just a week. 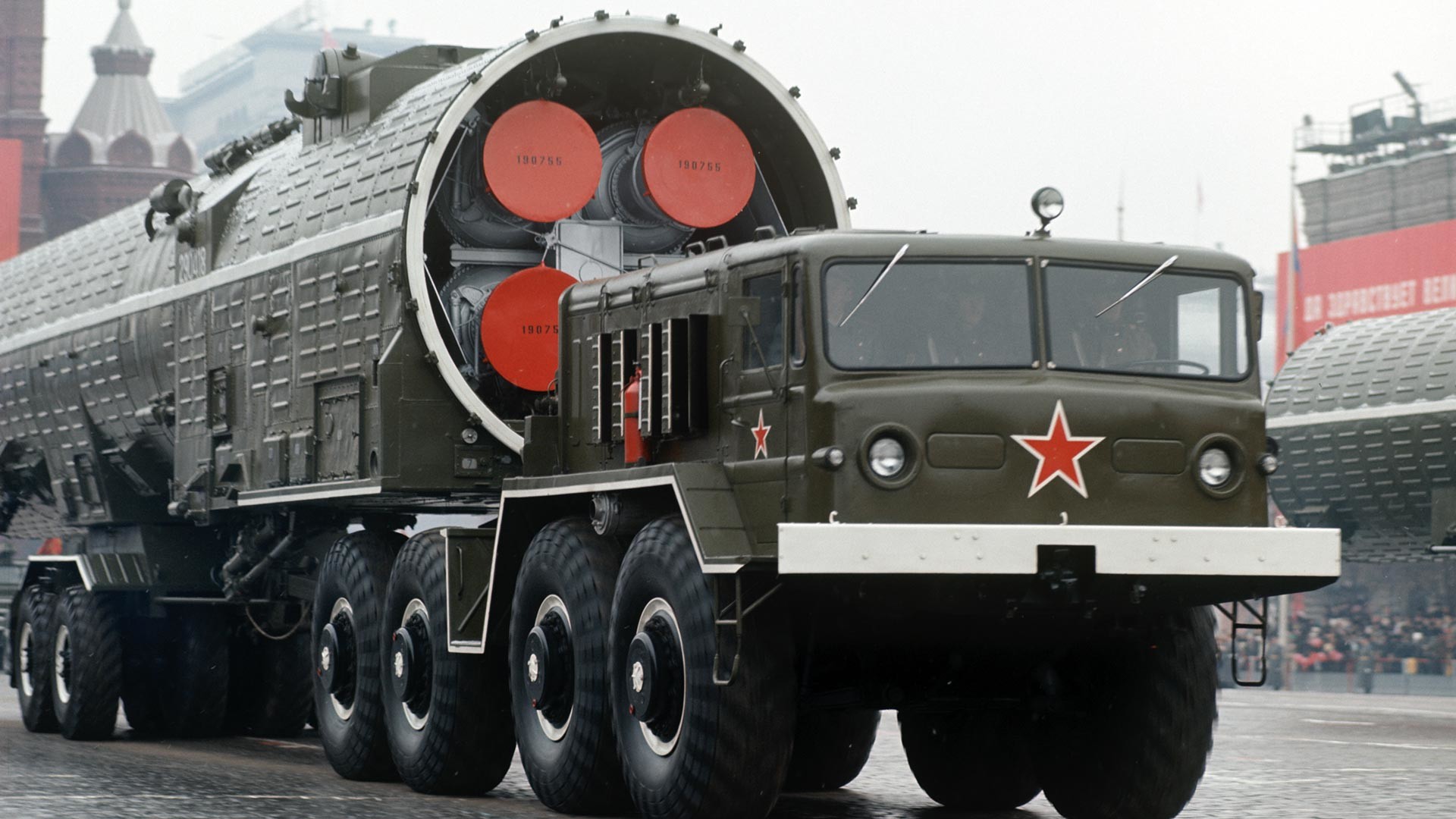 A Military Parade on Red Square to celebrate the fifty-fifth anniversary of the October revolution.

A response to aggression

Moscow believed that NATO would strike first. According to the plan, the alliance would nuke 25 objects in Poland along the Vistula River with nuclear bombs, turning the country into a devastated polluted area and effectively cutting off the Soviet troops in Eastern Germany, Hungary and Czechoslovakia from its main bases in the USSR.

This, however, would immediately trigger the Warsaw Pact into action. Soviet nuclear forces would strike Germany, Belgium, Netherlands, Denmark and northern Italy. Thus, the NATO headquarters in Brussels would be destroyed. 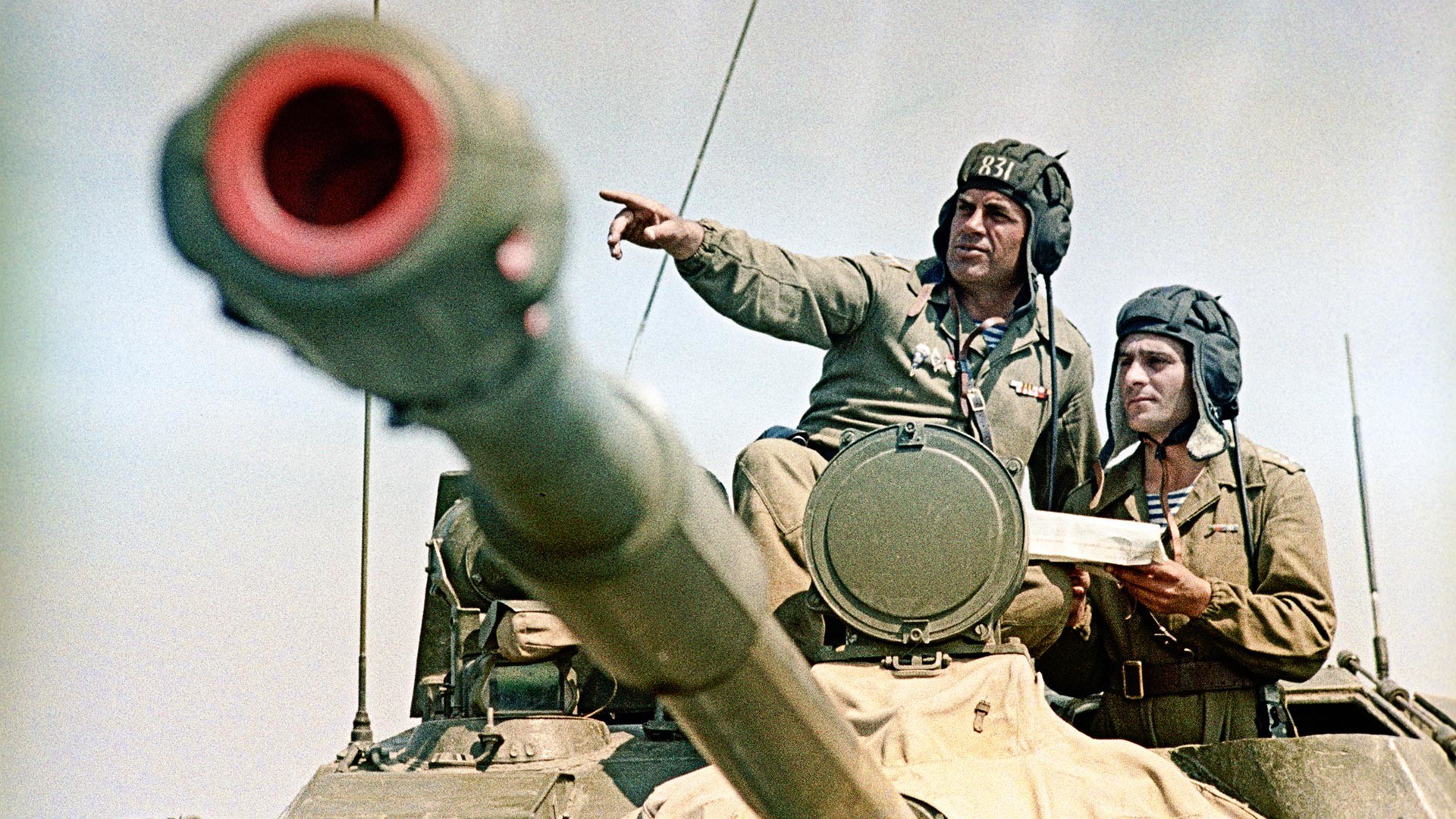 By not nuking the U.S., France and the United Kingdom the Soviets wanted to create division between the Western allies. They knew that not NATO general command, but the U.S., French and British leadership decided separately how and when to use their nuclear weapons. By such a maneuver, the USSR would give them a hard choice: whether to use their nuclear weapons against the Soviets and be certainly nuked in return, to fight with no use of nuclear capabilities or even to stay outside the conflict. With France’s complicated relations with NATO, which it left in 1966 (although continuing to cooperate with it), such a perspective wasn’t quite unbelievable.

After the nuclear strikes were done, the Soviet and Czechoslovakian armies planned to break through the enemy lines towards the River Rhine. Since, in tanks, they outnumbered the alliance several times, they were sure of success. At the same time, the neutral, but strategically important Austria, had to be also attacked and occupied by the Hungarians. 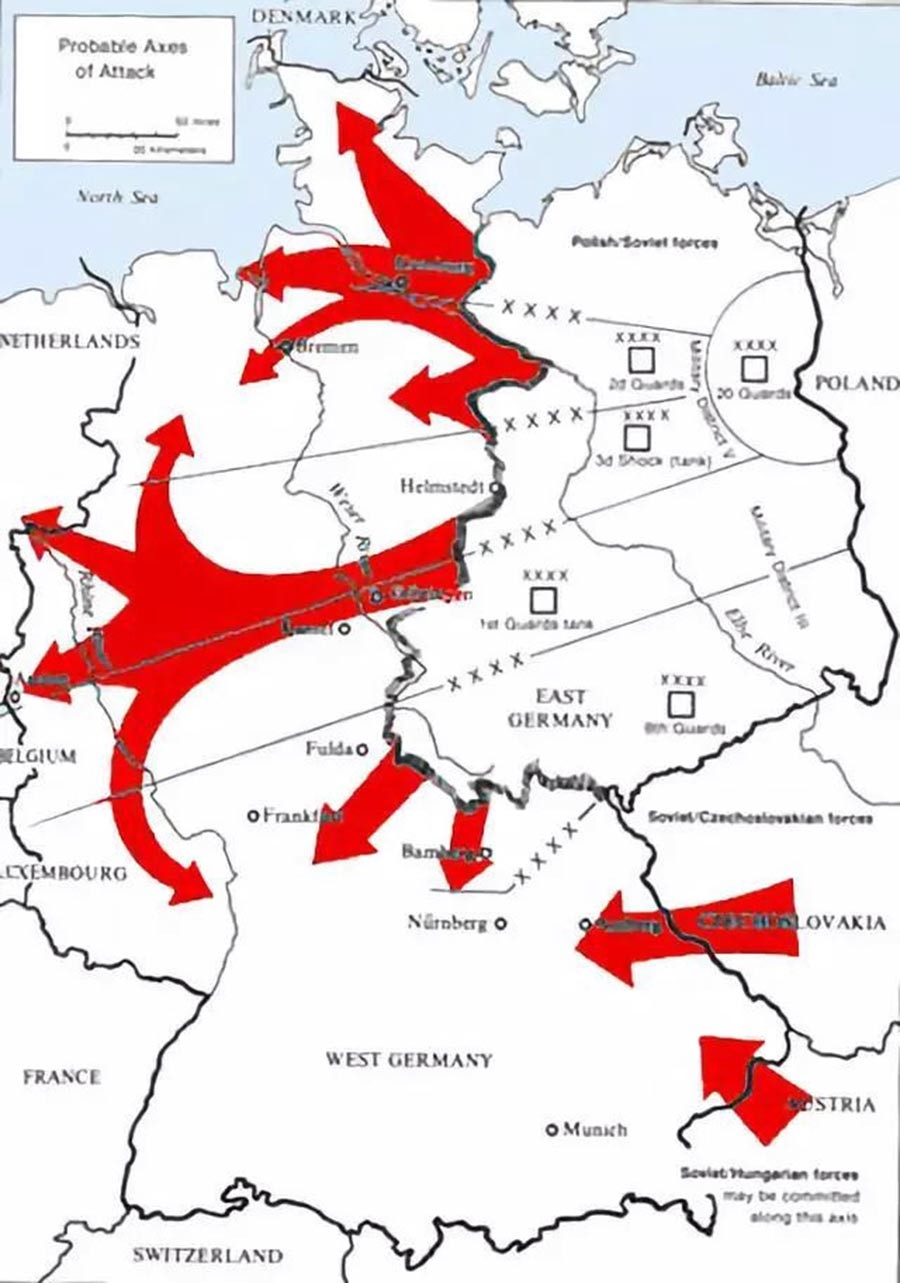 The important mission was entrusted to the Soviet Navy. Its task was no less than cutting all communications between the United States and Europe in the Atlantic and preventing Americans from sending reinforcements to its allies. Soviet submarines would hunt down and destroy the U.S. main trump card - aircraft carrier strike groups. Meanwhile, Soviet nuclear submarines in the Arctic Ocean had to be ready to respond to a possible nuclear strike by the U.S.

Moscow believed that if everything went according to the plan, the main NATO forces in Europe would be crushed during seven days. If necessary, the Soviet Army would continue its advance towards France. The shocked and distracted leadership of the Western countries would have no choice but to sit at the negotiation table and the full-scale nuclear war could be avoided. 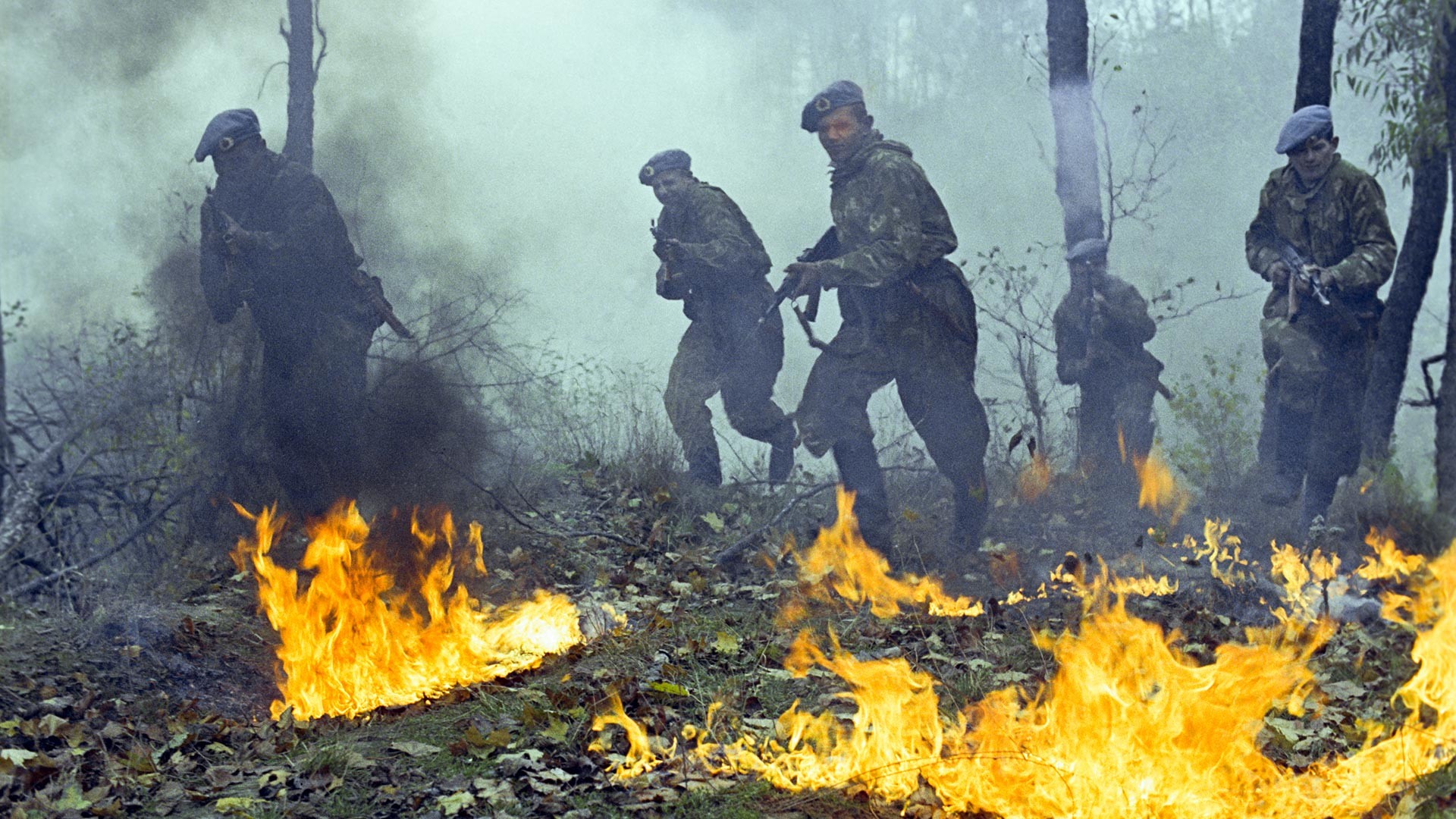 The Soviet command completely ignored the collective defense doctrine of NATO, proclaimed in the 1949 The North Atlantic Treaty, which stated that an attack of one member of the alliance was an attack on all of them. NATO was ready to escalate the full-scale nuclear war in the event of just one member state getting nuked, no matter if it possessed its own nuclear weapons or not.

Even the closest Soviet allies in the Warsaw Pact considered the ‘Seven Days to the River Rhine’ plan too optimistic and almost impossible to carry out. Still, the Soviets held secret drills based on this plan for 10 years until the late 1980s.