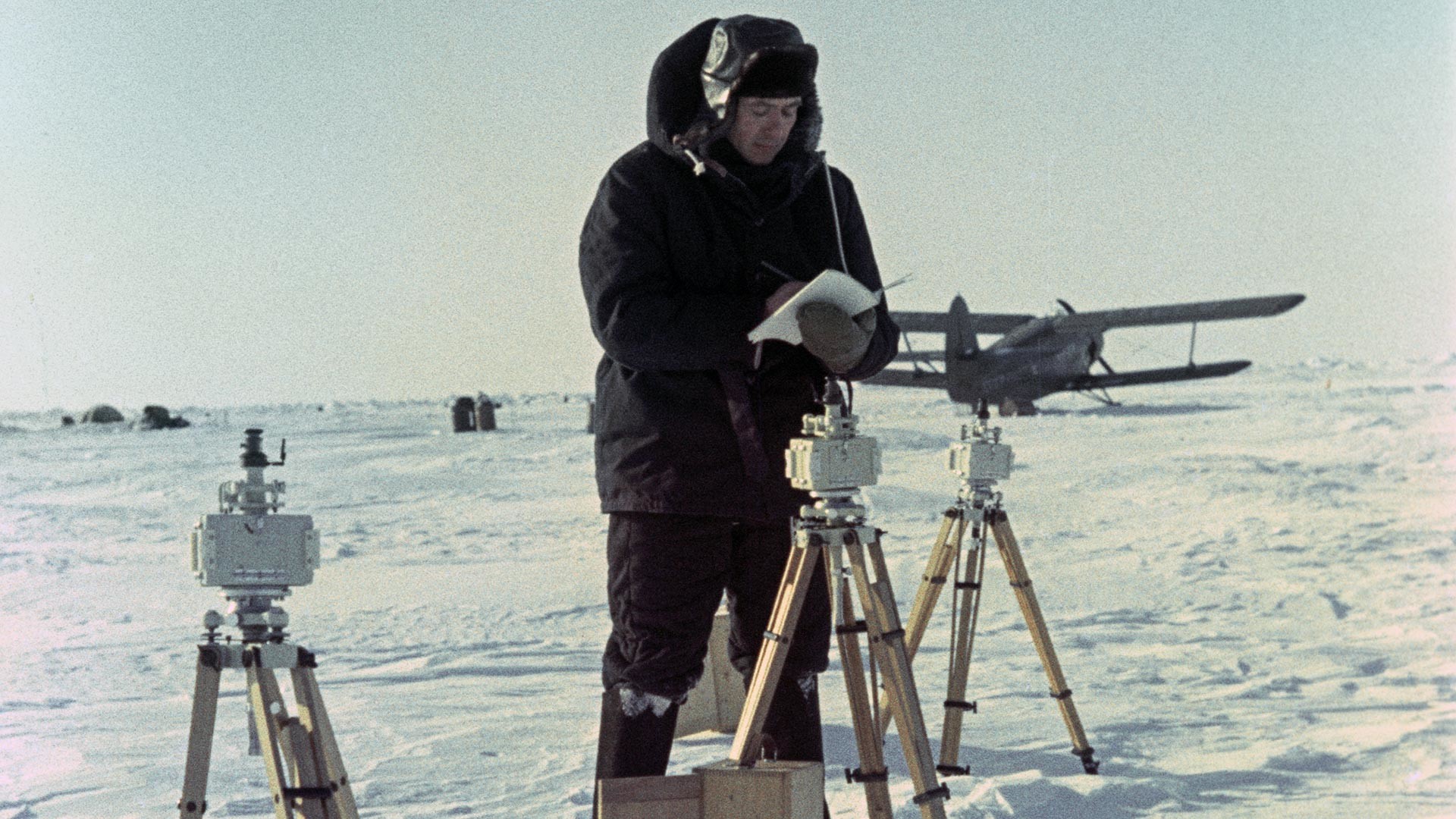 S. Preobrazhensky/Sputnik
These stations, abandoned by Soviet polar explorers, could disappear under the water at any moment. But the American intelligence agents who landed on them were unperturbed by this.

On May 28, 1962, two Americans parachuted from a B-17 Flying Fortress bomber and landed on Severny Polyus-8 (North Pole-8, or NP-8), an abandoned Soviet research station drifting on an ice floe in the Arctic Ocean. This was the start of one of the CIA's most unusual operations, which went down in history under the codename ‘Operation Coldfeet’.

In search of Soviet stations

A drifting station was only of any use to Soviet polar explorers up to the moment the ice floe it was on began to disintegrate. At that point, the scientists would be urgently evacuated and the abandoned station would continue to drift in the ocean until its final destruction. 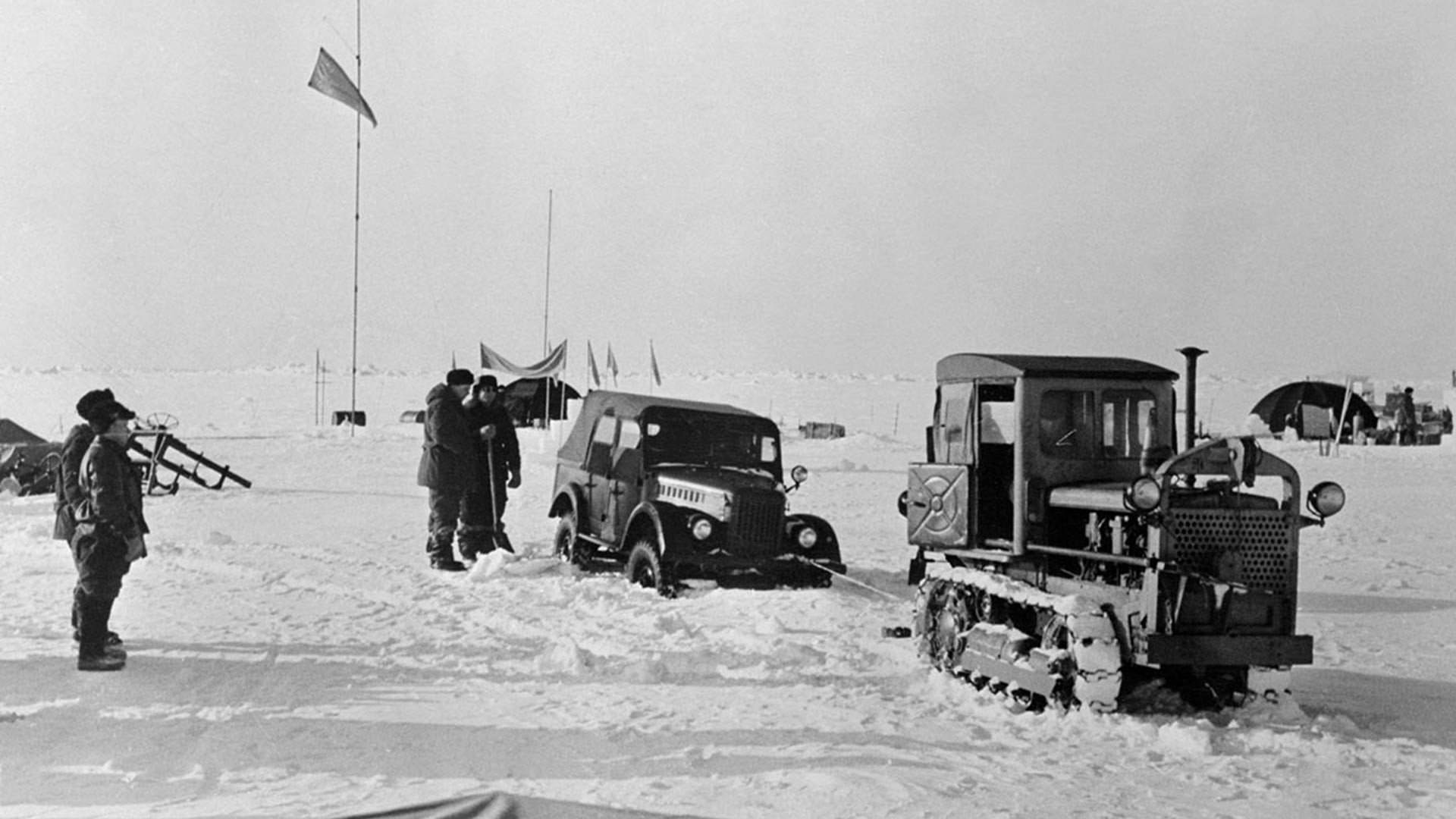 Tractor rescues disabled auto at one of the observation stations set up by Soviet Union scientists atop an ice floe in the Arctic region.

In the early 1960s, the CIA and the Office of Naval Research of the United States Department of the Navy launched a real hunt for abandoned Soviet stations. It was believed there was equipment for the acoustic detection of American submarines installed on them.

Initially, the target was the NP-9 station, discovered by a reconnaissance plane in May 1961. However, the operation got delayed and the station was carried too far out into the ocean.

In the spring of 1962, 970 km from a Candian Air Force base in Resolute Bay, another abandoned drifting station - the NP-8 - was unexpectedly spotted. It was an opportunity not to be missed. 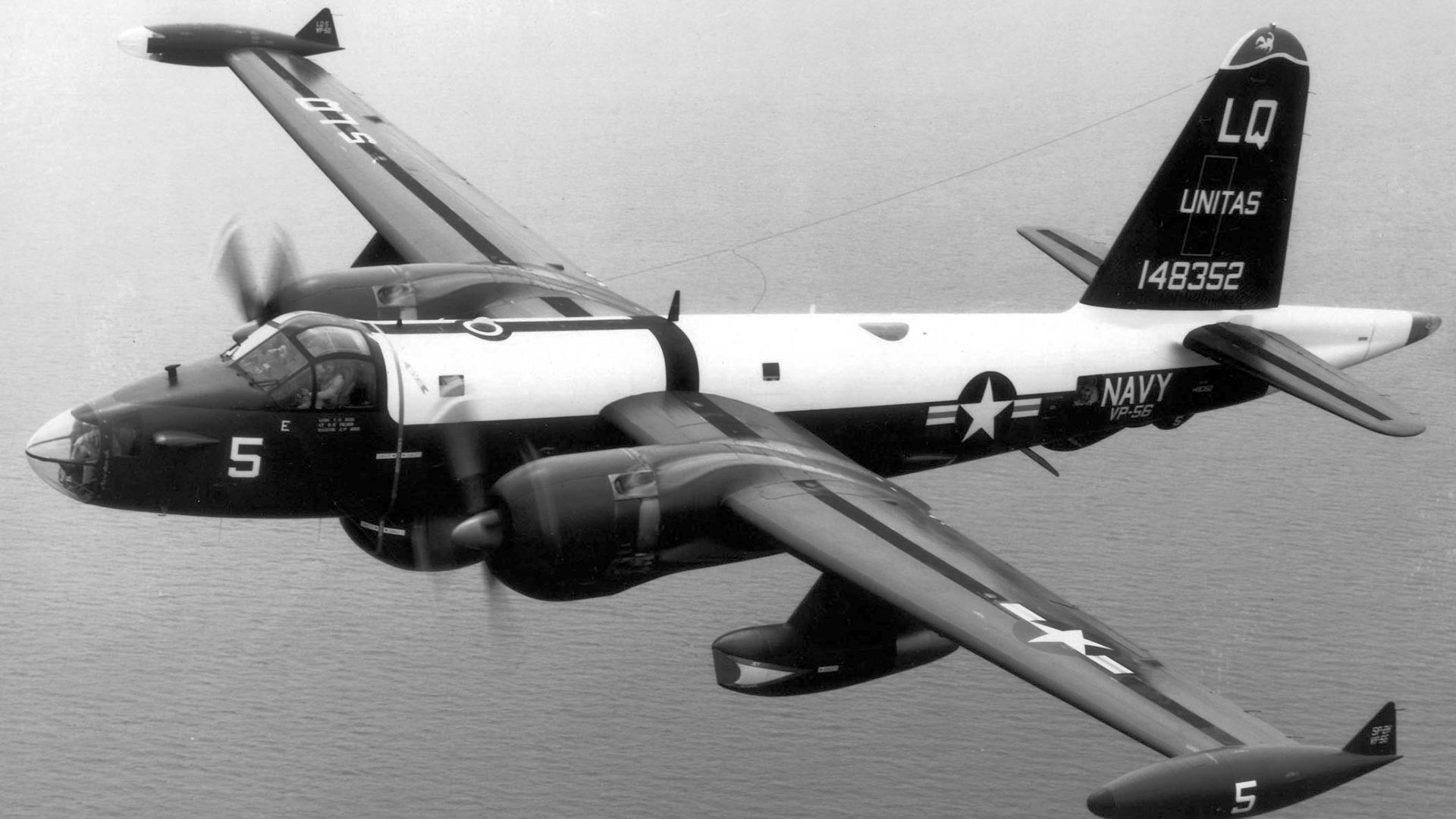 As it turned out, an ice-breaker could not get through the pack ice in the area, a helicopter would simply have been unable to reach the location and it was just too dangerous for an airplane to land on the disintegrating floe. So, it was decided to drop the specialists by parachute. But the question that then arose was how to get them off again.

In the end, it was decided to use a system for the evacuation of CIA agents from hostile territory known as ‘Skyhook’ which had been developed by Robert E. Fulton in the late 1950s. It required a small dirigible-shaped balloon inflated with helium from a special bottle, a 150-meter lift line and a low-flying airplane. 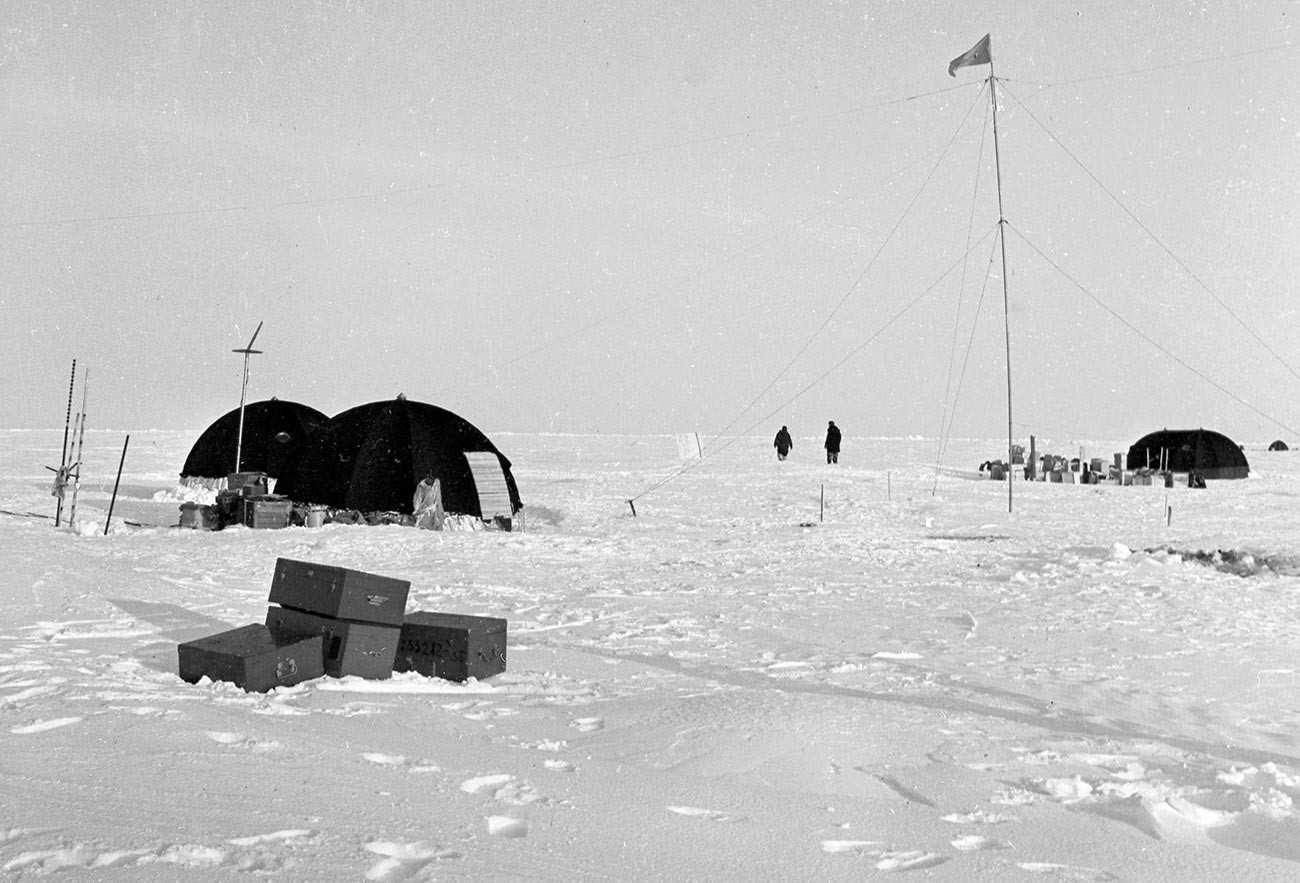 While the helium balloon ascended to the required altitude, the operative attached to it by the line would wait on the ground. The approaching plane would use special forks or "horns" to snare the line while releasing the balloon. The line was automatically reeled in on a winch, hoisting the agent on board.

On the ice floe

Major James Smith, an experienced paratrooper and Russian linguist, and his colleague, Lieutenant Leonard A. LeSchack, an expert on submarine surveillance systems, were given three days to study the station. Several boxes of essential equipment were dropped on the ice floe along with the agents.

As the Americans had expected, the Soviet scientists had left NP-8 in a hurry without having time to take all their equipment with them. The agents managed to discover more than 80 documents, collect fragments of abandoned Soviet equipment and take around one hundred photographs. 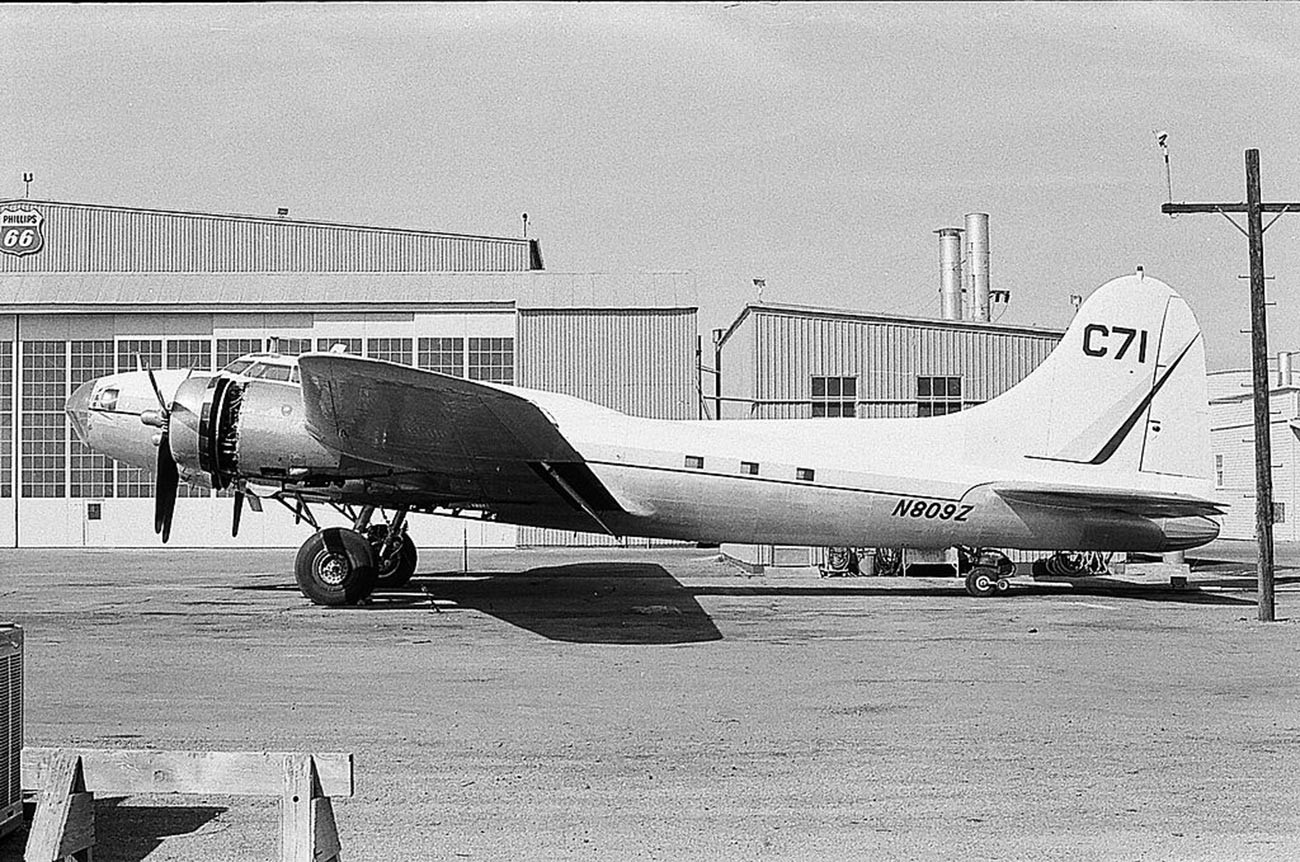 Towards the designated time of their evacuation, the weather at the station deteriorated drastically: Visibility went down sharply and an icy wind intensified. “I was instantly in a situation - what could be imagined as flying in a void,” recollected Connie W. Seigrist, the pilot of the aircraft that came to collect the agents.

The plane picked up the collection of trophies using the ‘Skyhook’ system without difficulty, but with the men, things proved more difficult. The wind dragged LeSchack almost 100 meters across the ice as he awaited evacuation until he managed to anchor himself to an ice block. Even after the plane had picked him up he spent another 10 minutes dangling in the icy air flow before being hoisted on board. 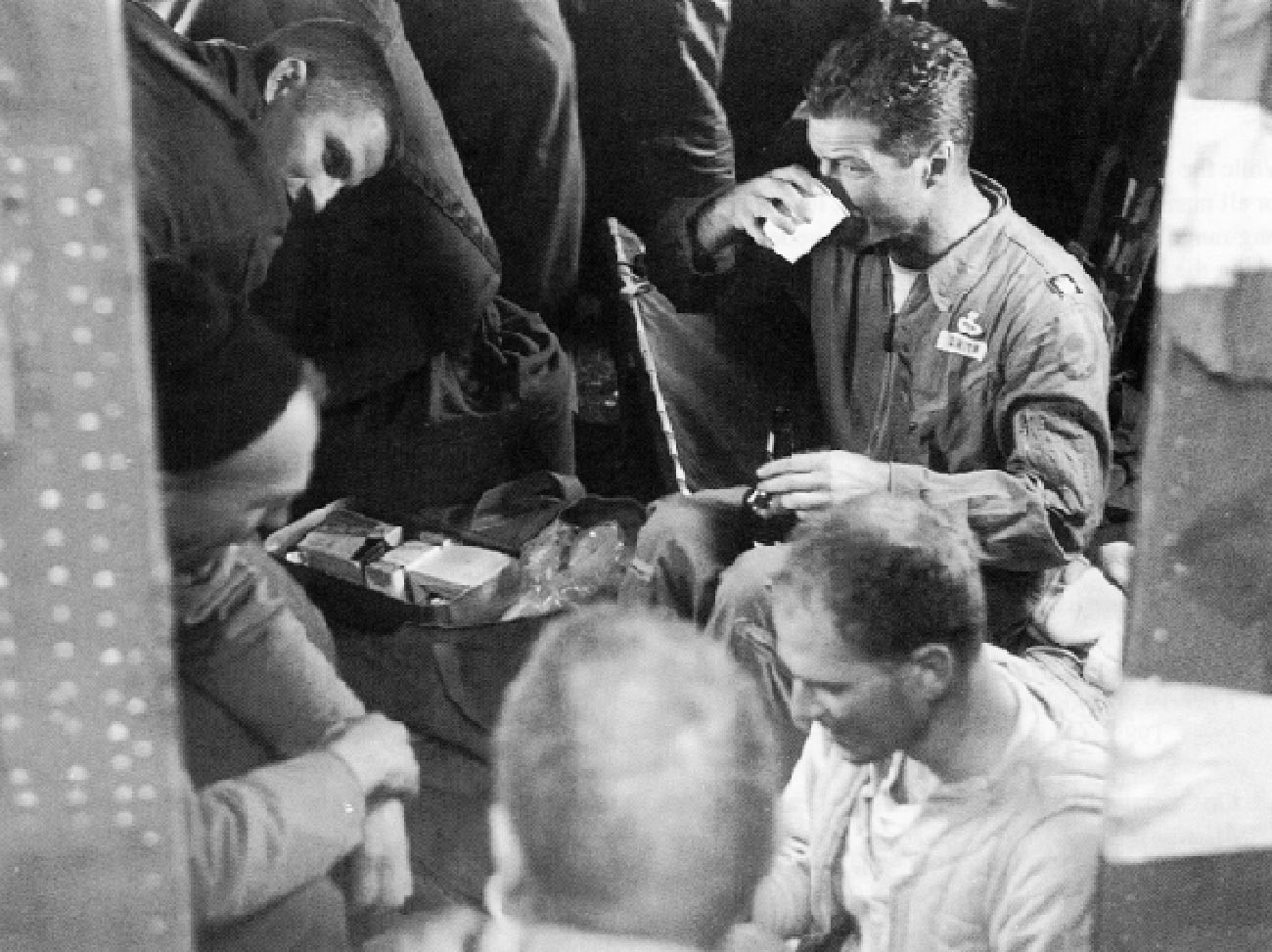 Major Smith on board Intermountain's B-17, 2 June 1962. Lieutenant LeShack is in the lower right corner.

Having observed what happened to his colleague, Smith released his balloon and firmly held on for as long as he could to a Soviet tractor that had been abandoned next to the station: In the end, he was lifted off without particular difficulty. “…Take your time, I’m lying here relaxing in the snow. It’s the first time I’ve been able to relax in about a week,” he jokingly radioed to the pilots.

As a result of Operation Coldfeet, the Americans discovered that the Soviet Union had achieved considerable advances in polar meteorology and polar oceanography. In addition, evidence was obtained that the Russians were using equipment for the acoustic detection of American submarines in the Arctic. “In general, the remarkable Soviet accomplishments in their drift stations reflect their long experience in this field and the great importance that their government attaches to it,” noted the commander of the operation, Captain John Cadwalader.