When did Russia fight against France? 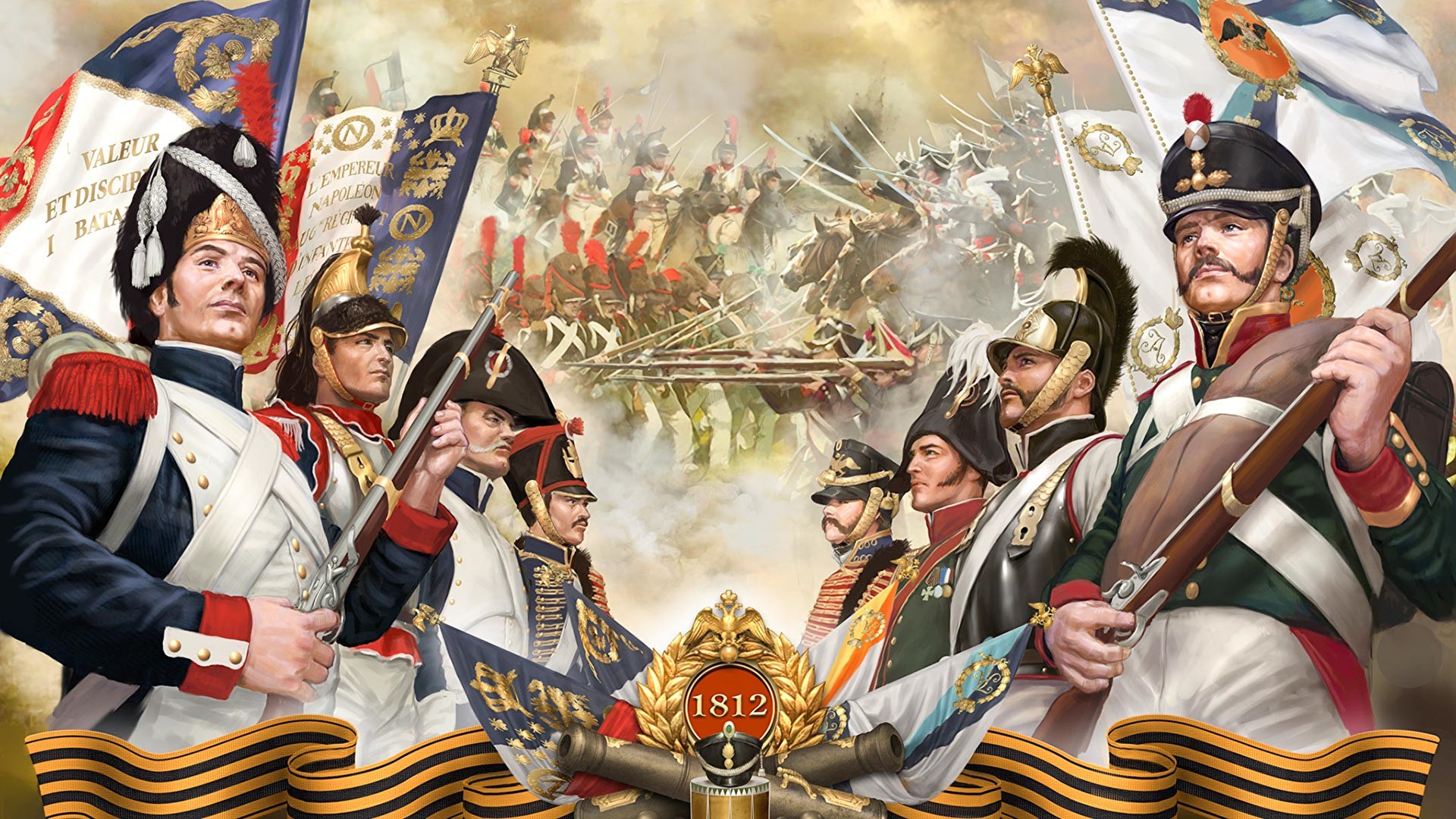 Official site of the Ministry of Internal Affairs of the Russian Federation
The French have always been one of the most formidable opponents for the Russians. They even managed to seize Moscow once, where they nearly blew up the “heart of Russia” - the Kremlin.

The War of the Polish Succession

The first major military conflict between Russia and France was the so-called ‘War of the Polish Succession’ in 1733-1735. The Rzeczpospolita, which by that time had been greatly weakened, was unable to resist the intervention of the great powers and they took advantage of it. 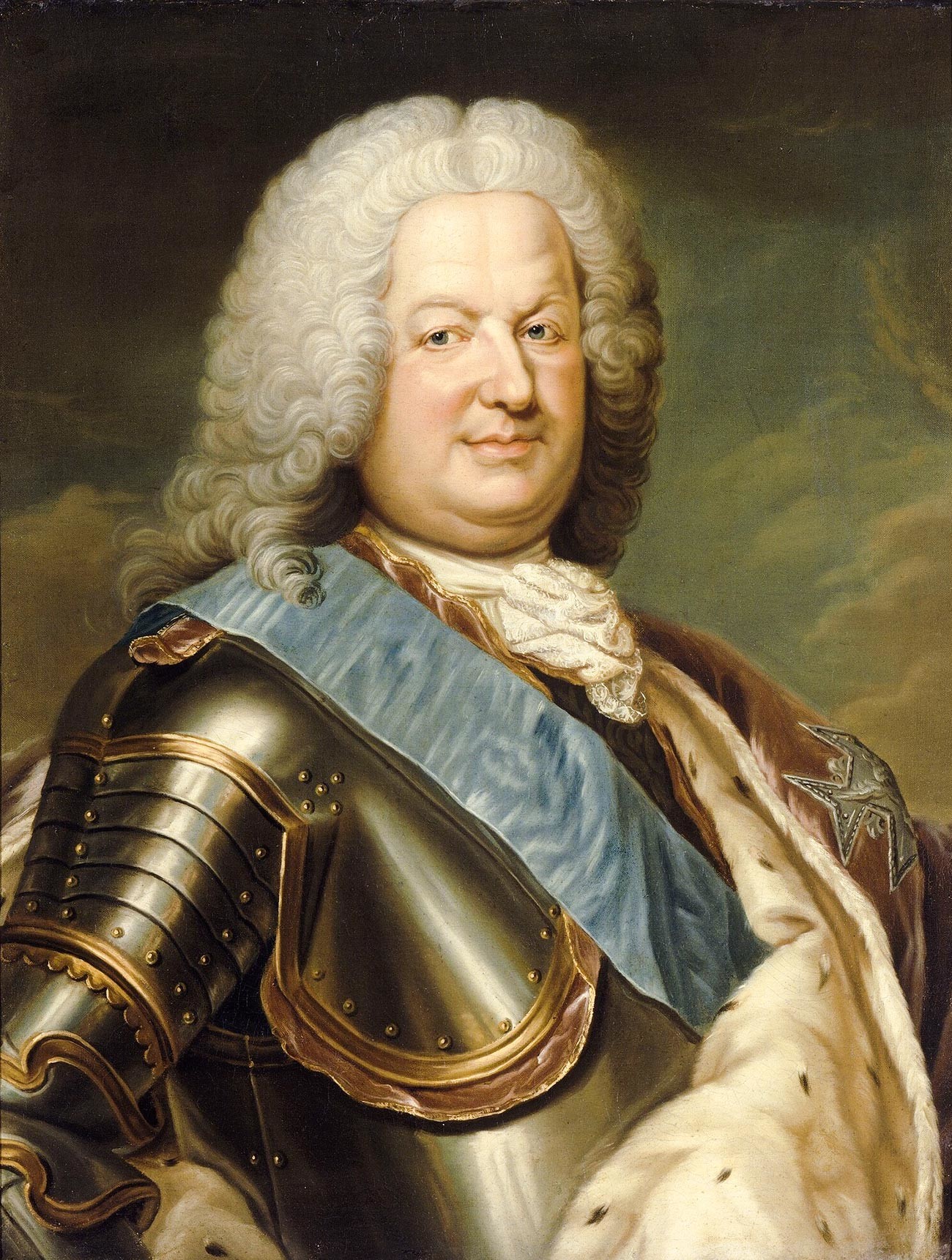 The struggle between European states for influence over that country intensified after the death of Polish king August II the Strong in 1733. When electing his successor, Russia and Austria supported the candidacy of the deceased ruler’s son, Elector of Saxony Frederick Augustus II, while France, Spain and the Kingdom of Sardinia banked on another candidate, Stanisław Leszczyński, who had been the King of Poland in 1704-1709.

Very soon, the opposing sides switched from diplomatic intrigues to outward hostilities, the success in which, in the end, went to the supporters of Frederick Augustus II. The Russian-French military confrontation culminated in 1734 in the Russian and Saxon armies capturing Danzig (now Gdańsk), where Leszczyński was hiding. He managed to flee abroad, but over 2,000 French soldiers became Russian prisoners. 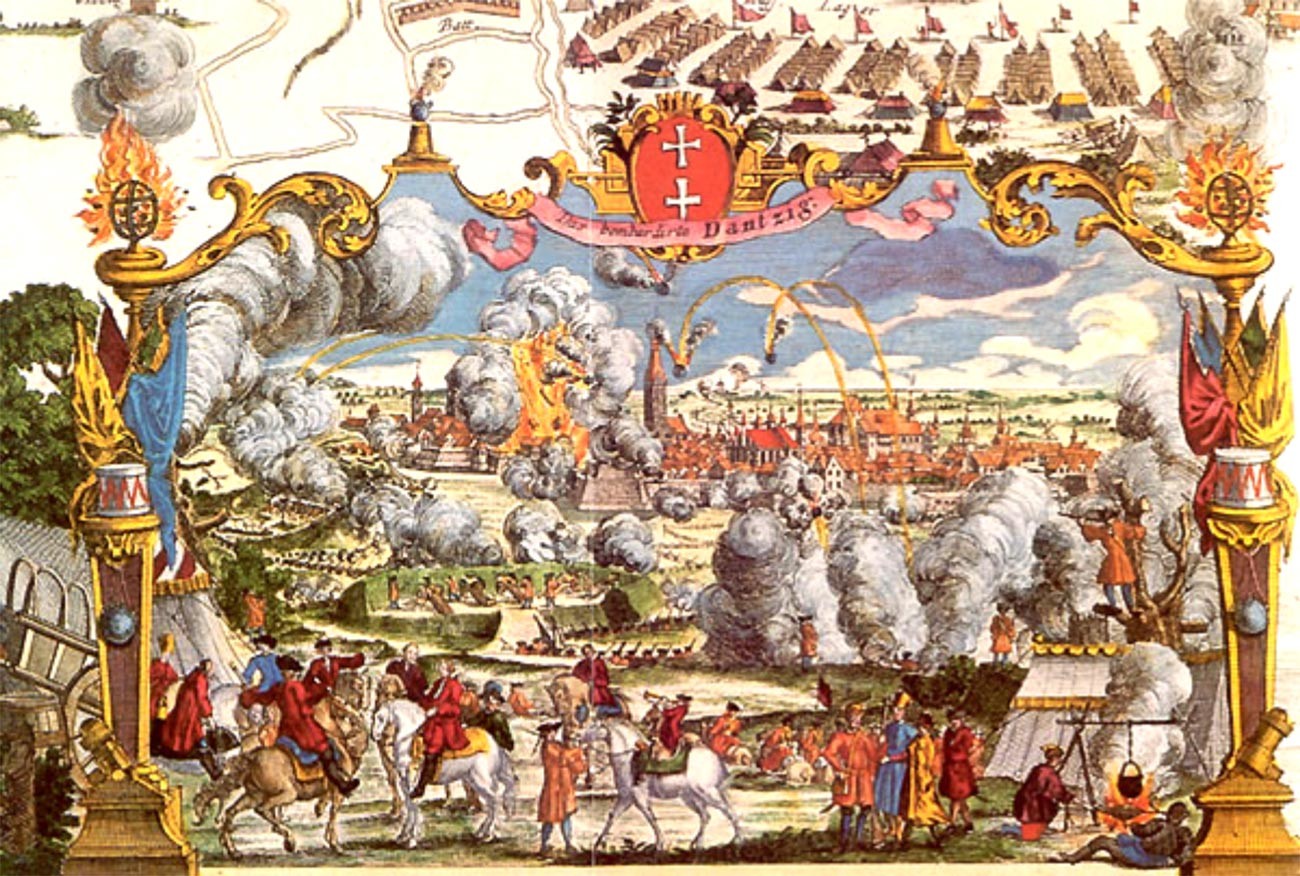 A few months later, Empress Anna Ioannovna released all the captives to their homeland, with the exception of the French ambassador to the Polish-Lithuanian Commonwealth, Antoine-Felix de Monti, whom she blamed for the war that broke out between Russia and France. The Marquis was released only a year later at the personal request of Holy Roman Emperor Charles VI.

The bloody French Revolution of 1789, which became a devastating nightmare for the country's aristocracy and the royal family, scared European monarchs to no end. So they united in an effort to destroy this “pestilence” and prevent its spread to their countries.

Russia’s involvement in the War of the First Coalition (1792-1797) was rather passive and limited to sending in volunteers and blockading the northern French coast with Baltic Fleet ships. Empress Catherine II was far more preoccupied with Polish affairs - the divisions of the Polish-Lithuanian Commonwealth (in 1793 and 1795) and the suppression of the Tadeusz Kosciuszko uprising in 1794. 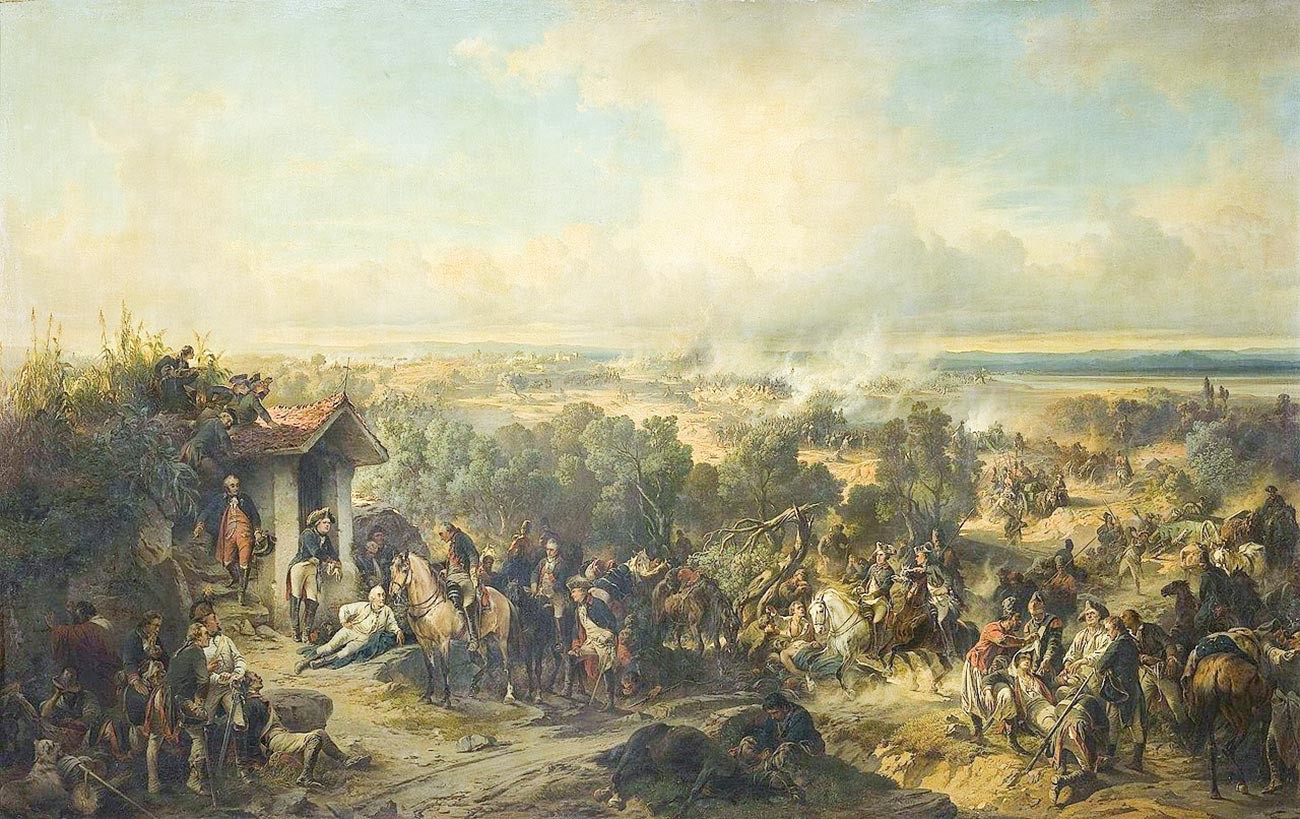 In the War of the Second Coalition (1799-1802), Russia was a far more active participant, with one of the best generals in the history of Russia, Alexander Suvorov, fighting against the French. He inflicted a number of painful defeats on the enemy, liberating northern Italy among other things. Etienne Jacques Joseph Alexander Macdonald (who later became one of Napoleon’s marshals), defeated by Suvorov at the Battle of Trebbia, recalled: “This defeat could have a detrimental effect on my career. I was saved only by the fact that I was beaten by Suvorov.”

However, not everywhere things went so smoothly. The Anglo-Dutch expedition to Holland, which had been conquered by the French, in the summer and fall of 1799 ended in disaster. Only the British benefited from it, having captured the Dutch fleet. Russia did not get anything out of that expedition.

Emperor Paul I, who was on the throne at the time, grew increasingly more dissatisfied with his Austrian and British allies, which in the end led Russia to make a foreign policy U-turn in late 1800, opting for a rapprochement with France. The Russian emperor even discussed with Napoleon, who, by that time, had become the First Consul of the Republic, the idea of a joint invasion of British India. “With your ruler, we will change the face of the world!” Bonaparte told the Russian envoy in Paris. 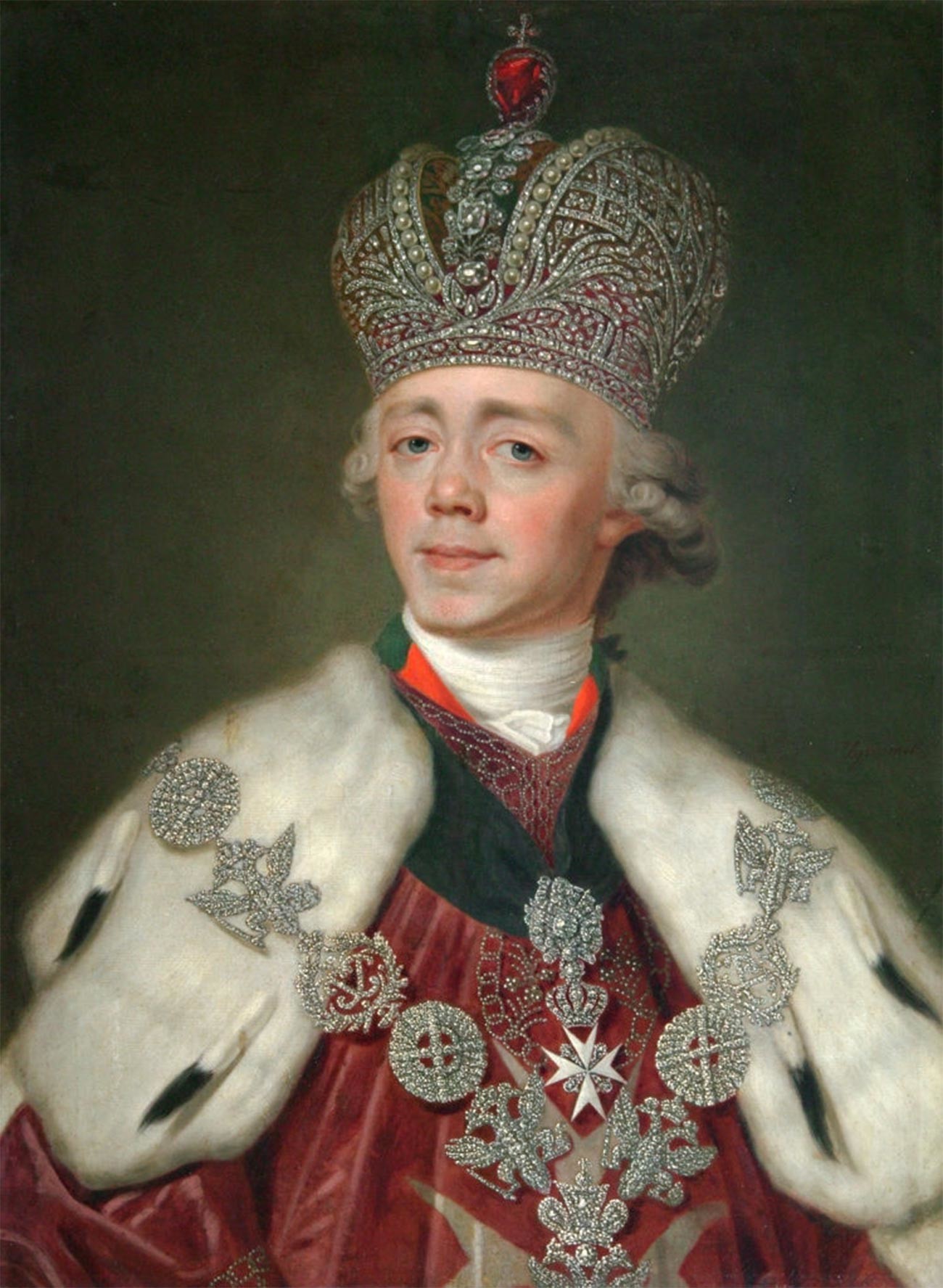 Emperor Paul I of Russia.

However, those ambitious plans never came to fruition. Paul I was assassinated on March 24, 1801, as a result of a conspiracy of the nobility, in which Great Britain had played an active role. His son Alexander I ascended the throne and immediately brought anti-French policy back.

Russia continued to take part in anti-French coalitions, except that now it had to confront the military genius that was Napoleon. The Russian army was in for a series of bitter defeats.

On December 2, 1805, during the Battle of Three Emperors at Austerlitz, Napoleon routed the Russian and Austrian troops. After the defeat in the Battle of Friedland on June 14, 1807, Alexander I had to ask the French ruler for a truce. 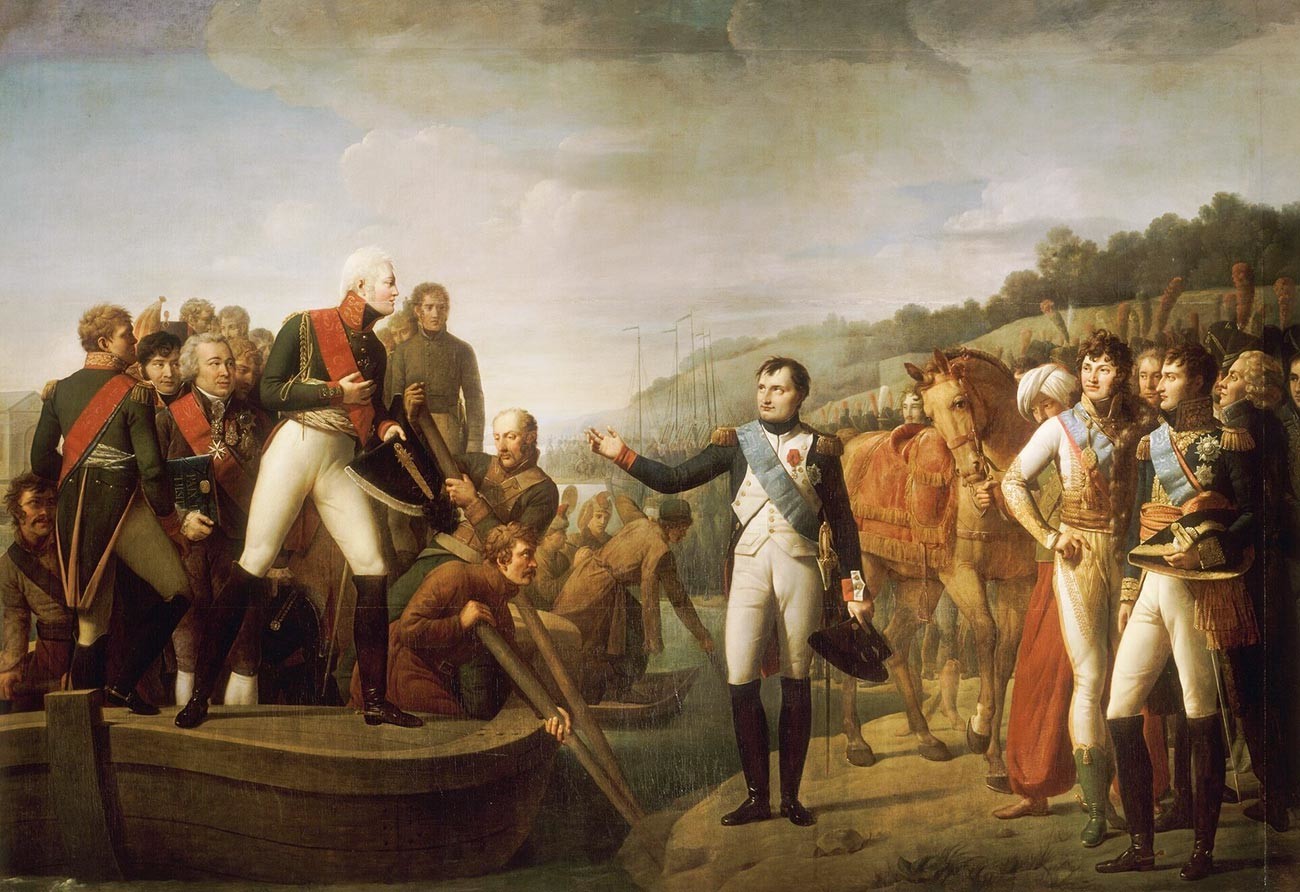 Farewell of Napoleon from Tsar Alexander I on 9th July 1807.

Under the terms of the Tilsit Peace Treaty, concluded soon after, Russia in effect became an ally of France and joined in the continental blockade of Great Britain. Except that if Paul I sought an alliance with Bonaparte of his own volition, his son was doing it under duress.

As a result, Russia continued to secretly trade with Britain, which angered the French. Tensions in relations between the two powers steadily grew, which ultimately led to Napoleon’s Great Army invading Russia in the summer of 1812.

Bonaparte hoped to quickly defeat the Russian troops in a major battle and to force Alexander I to rejoin the continental blockade (“Without Russia, the continental system is an empty dream,” the French emperor said.). However, instead of a quick victory, what he got was a genuinely patriotic war, a large-scale partisan movement and fierce resistance from the Russian troops. 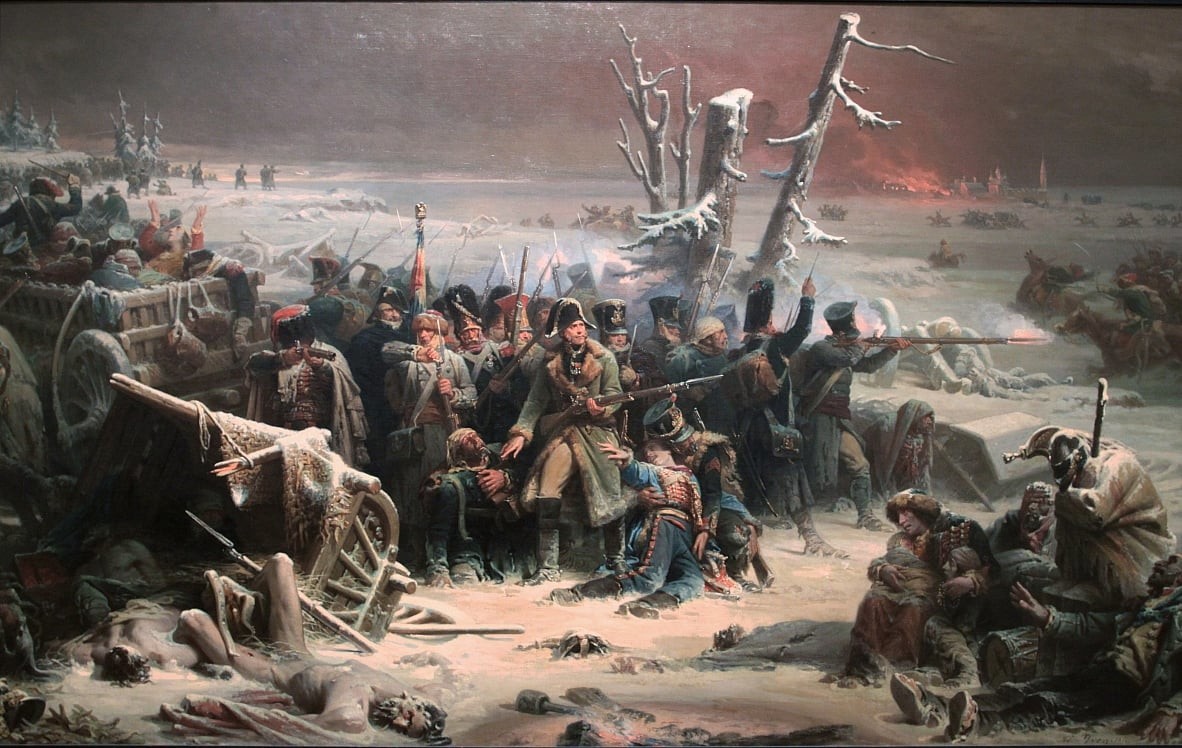 Marshal Ney Supporting the Rear Guard during the Retreat from Moscow.

The French even managed to seize Moscow, but Alexander I refused to engage in negotiations with Napoleon. Leaving the city, the embittered French emperor ordered to blow up the Kremlin, but, in the end, the plan failed.

Retreating to the west, the Great Army dwindled and soon ceased to exist as a fighting force. The Russian troops pursued Bonaparte, defeating him in the Battle of the Nations near Leipzig in October 1813. On March 31, 1814, Alexander I entered Paris and soon after that the French emperor abdicated the throne.

Napoleon’s triumphant return to power in France in the spring of 1815 (the so-called ‘Hundred Days’) forced the allies to urgently form a new, seventh, anti-French coalition. However, Russia hardly took part in any hostilities. This time, the allies crushed the French emperor without its assistance. 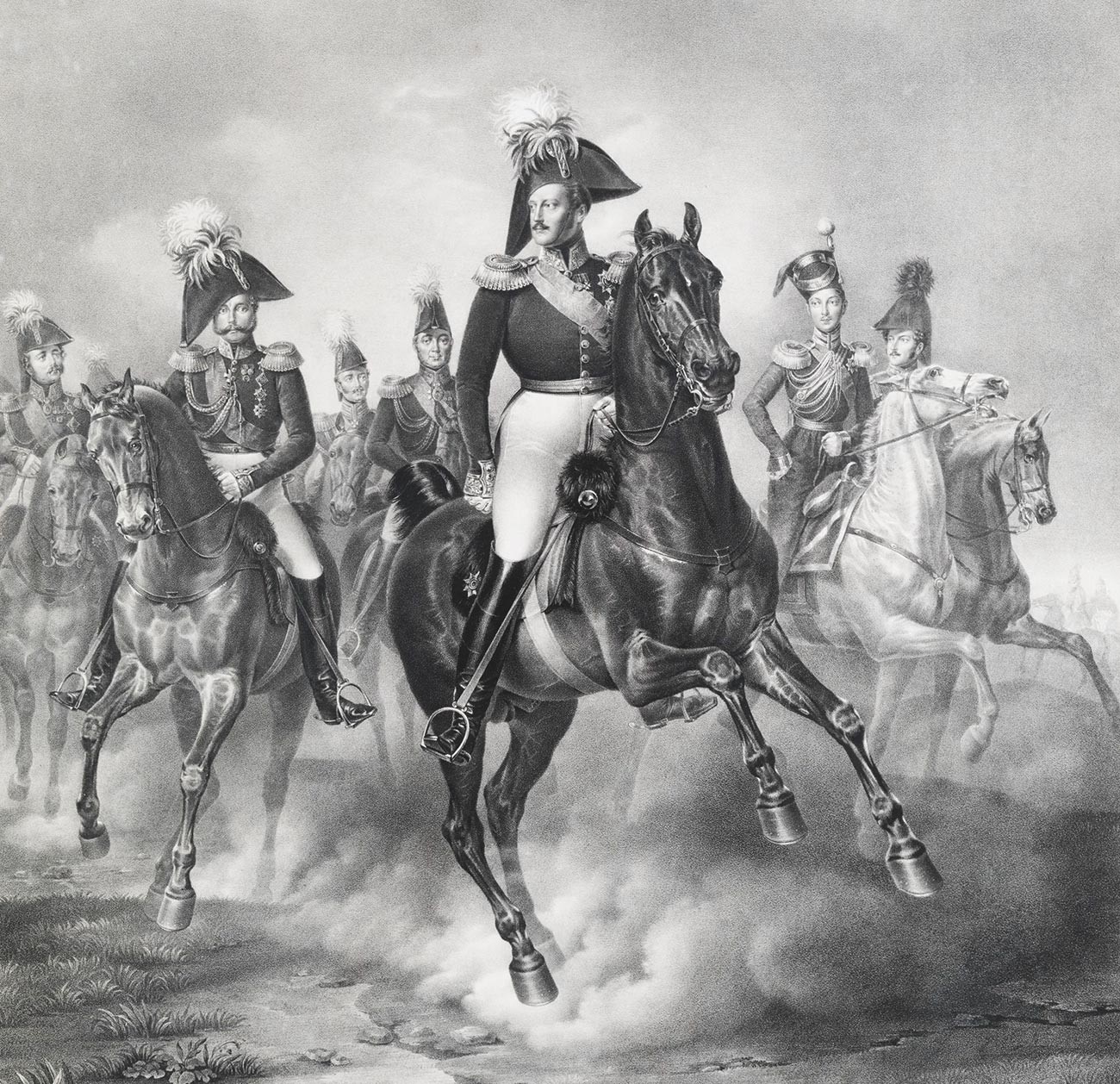 Nicholas I of Russia.

By the mid-19th century, the once mighty Ottoman Empire had become “the sick man of Europe”. Weakened by internal crises, the country was literally on the verge of collapse, unable to resist the expansion of the leading powers.

Emperor Nicholas I saw this as an excellent opportunity to strip his southern neighbor of its Balkan possessions with their Orthodox Christian population. However, the Western powers were categorically opposed to such a strengthening of Russia.

In the end, during the so-called Crimean War (1853-1856), Russia found itself in confrontation with the combined forces of Great Britain, France, the Ottoman Empire and the Kingdom of Sardinia. For the French, entering the war against the Russians had personal motives too as they sought to avenge their defeat of 1812. 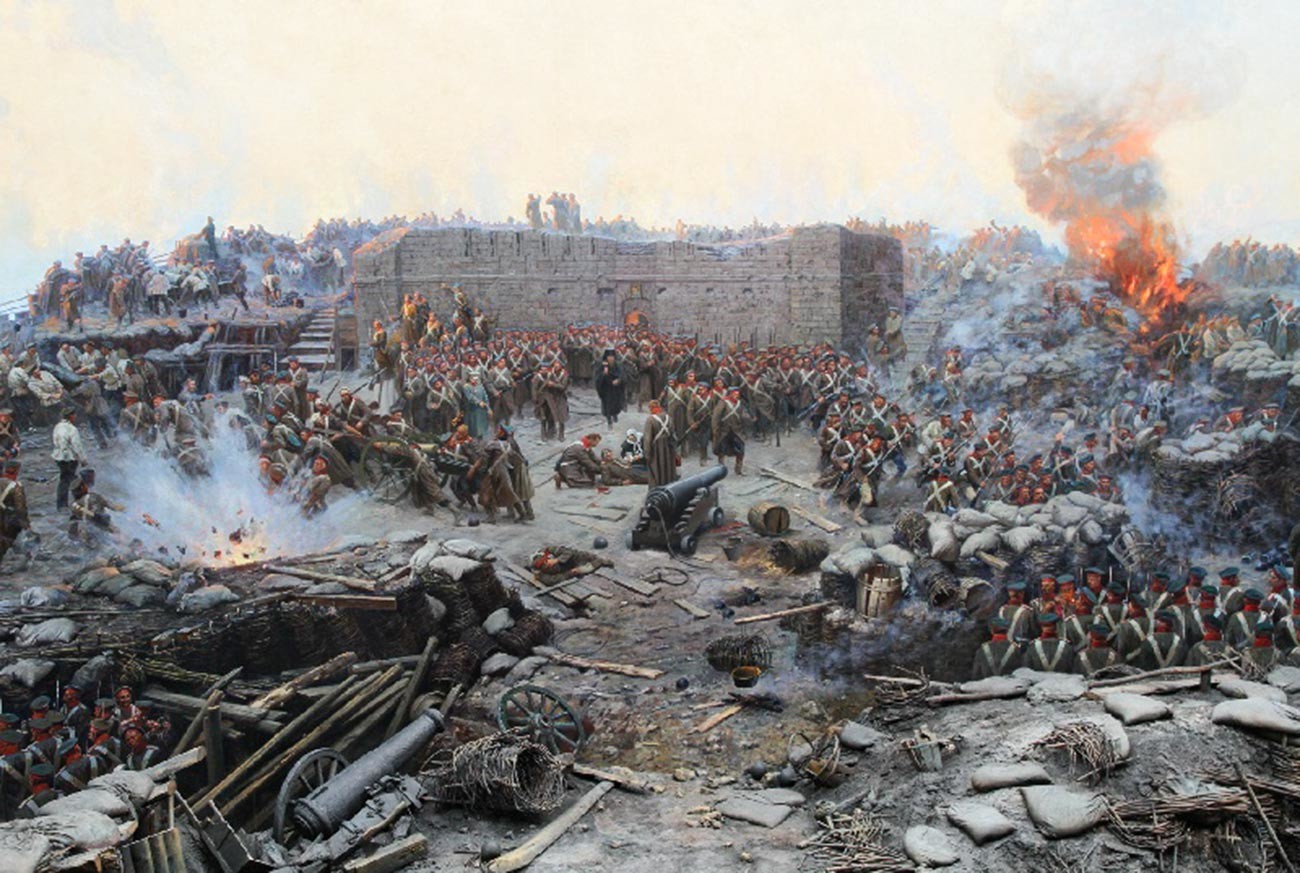 The fighting in that war took place in the Caucasus, the Pacific Ocean, the Balkans, but the main battlefield was Crimea, which had been invaded by the allied armies. The military confrontation culminated in the siege of Sevastopol, the main base of the Russian Black Sea Fleet, which lasted 350 days. The city’s fall in September 1855 precipitated the end of the war.

Russia suffered a crushing defeat as it had to fight alone against a coalition of world powers and with an army that was technologically less advanced than the armies of Western European countries. One of the outcomes of that defeat was that the Russian Empire was banned from having a navy on the Black Sea (the restriction was lifted in 1871). It also lost its protectorate over Moldavia and Wallachia and its exclusive patronage over the Christian subjects of the Ottoman Empire, which it had secured as a result of the victory over the Turks in the war of 1768-1774.

In the spring of 1918, the Entente Powers began to send in their troops to Soviet Russia. The Allies had intervened in the Civil War, which was engulfing the country, on the side of the anti-Bolshevik, so-called White, forces. 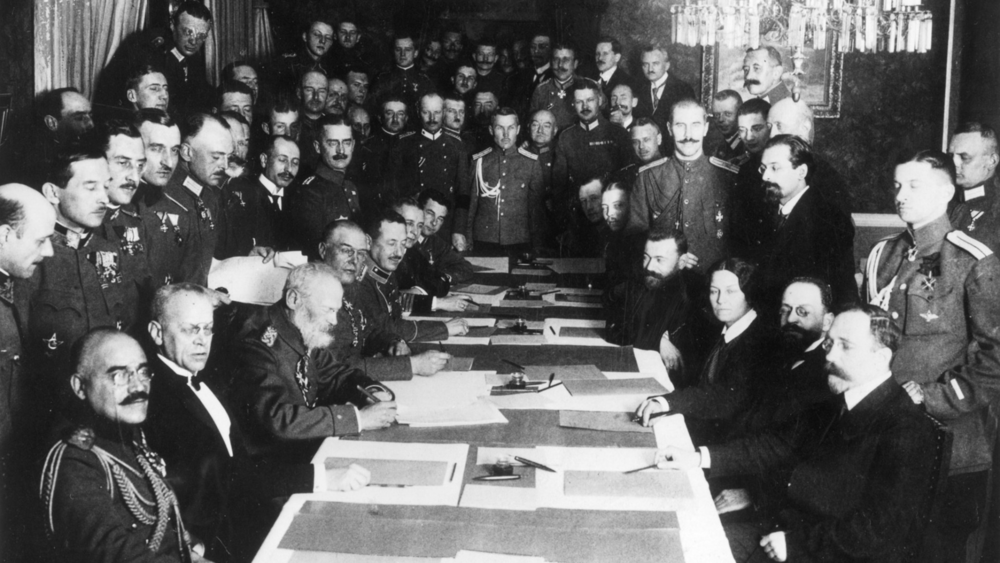 The driving force behind the Entente’s intervention, however, was not hatred of the Bolshevik ideology. Initially, the West did not consider Lenin or Trotsky to be a serious force capable of staying in power for a long time. For the British and the French, they were nothing more than German puppets, the Kaiser’s henchmen acting in his interests.

The Entente was much more worried about the separate peace treaty between Russia and Germany that was signed in Brest-Litovsk on March 3, 1918, and Russia’s withdrawal from the war against the Central Powers. This had allowed the Germans to free troops from the Eastern Front and deploy them to France.

Among the foreign contingents that intervened in the Russian Civil War, the French one was one of the largest. The French fought in the expeditions in the north of Russia, in the Far East and in Siberia. However, the bulk of the French forces (15,000 people) landed on the Black Sea coast: in Odessa, Sevastopol and Kherson. 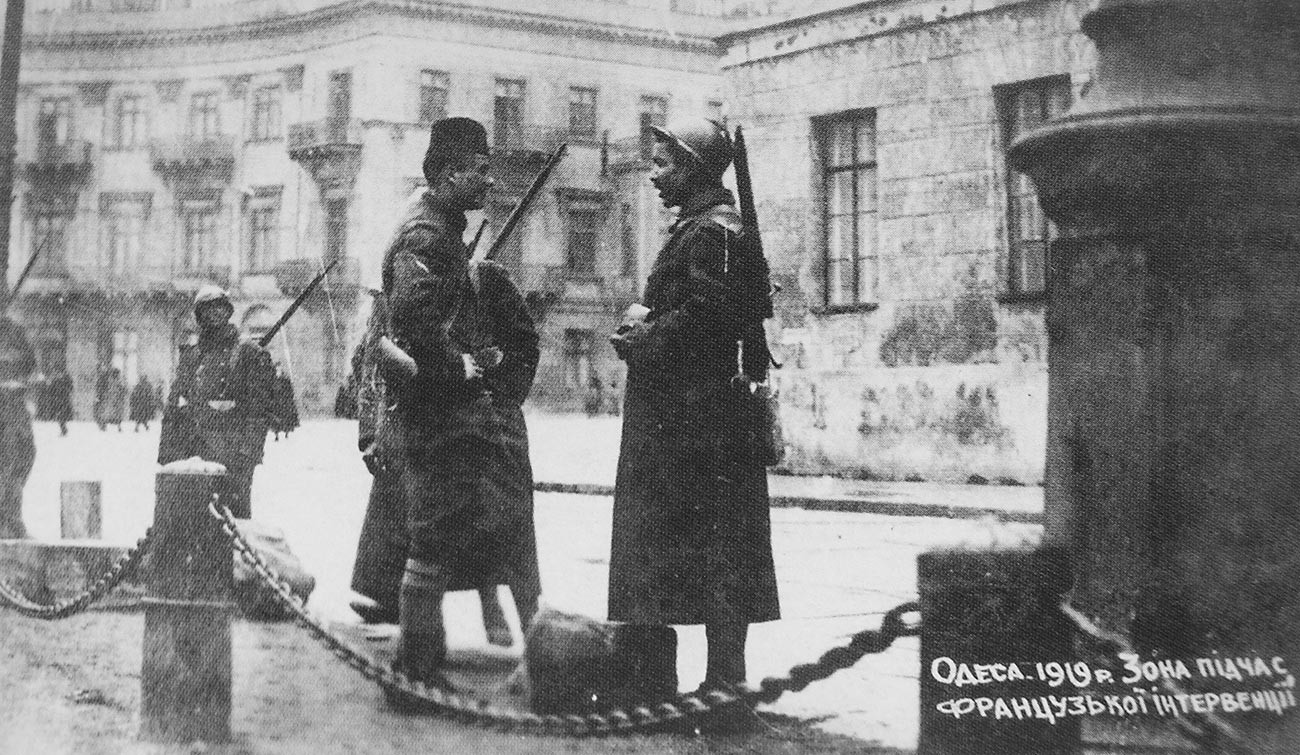 Singer Alexander Vertinsky observed them in Odessa: “Exotic African troops were peacefully walking along the streets of this beautiful seaside city: Negroes, Algerians, Moroccans brought by the French occupiers from hot and distant countries - indifferent, carefree, with little understanding of what was going on. They did not know how to fight and did not want to. They spent their time shopping, buying all sorts of trash, cackling and chatting in their guttural language. They themselves did not know for sure why they had been brought here. At first, frightened local residents, intimidated by their masquerade appearance, tried to hide, but then crawled out into the light and, assuring themselves that they were ‘not at all scary’ and did not bite, calmed down.”

The French spoke of “liberating Russia from the Bolshevik usurpers”, but it turned out they had no clear program of action or specific tasks. Furthermore, they tried to avoid full-scale participation in hostilities against the Red Army.

Maneuvering between the forces of White and Ukrainian nationalists operating in the south of the former Russian Empire, they irritated both. One of the leaders of the White movement, General Anton Denikin, complained that France was simultaneously trying to help the Whites, the Ukrainians, the Poles and the Finns. In reality, only Poland received any serious assistance. 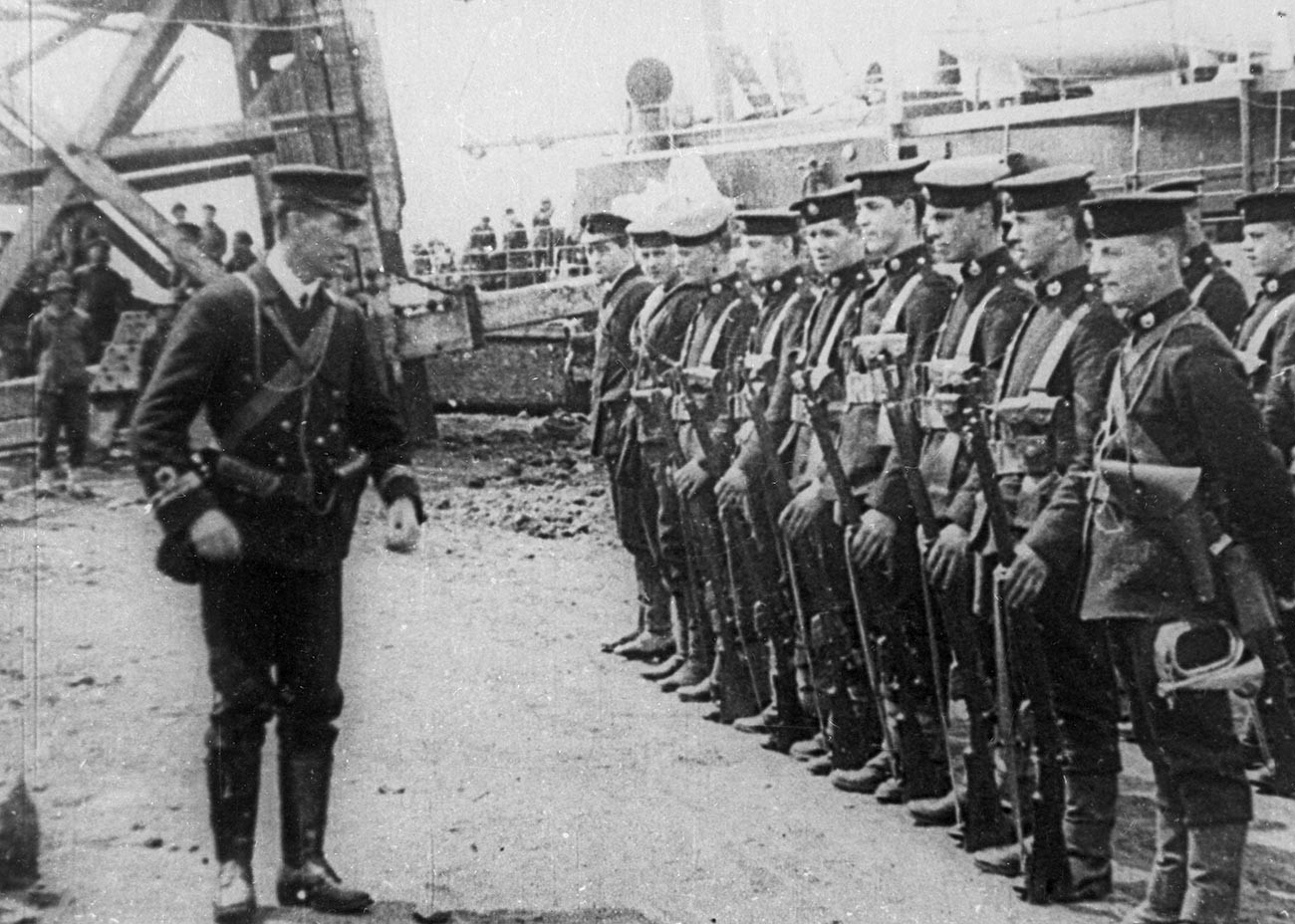 After the Armistice was signed in Compiegne on November 11, 1918, ending World War I, the morale of the French soldiers and sailors still remaining in Russia began to plummet.

They could not understand why they had to sit in remote Russia instead of finally going home. In addition, a strong public movement against the intervention was gaining momentum in the European countries themselves, which ultimately led to its curtailment.

In mid-March 1919, under pressure from the rebel detachments of the former commander of the Army of the Ukrainian People’s Republic, Nikifor Grigoriev, who by then had defected to the Bolsheviks, the French left Kherson and Nikolaev. In early April, Odessa was evacuated as well. In the fall of the same year, the last remaining French soldiers left Russia from the northern port of Arkhangelsk.