Russia’s most brilliant victories over Napoleon 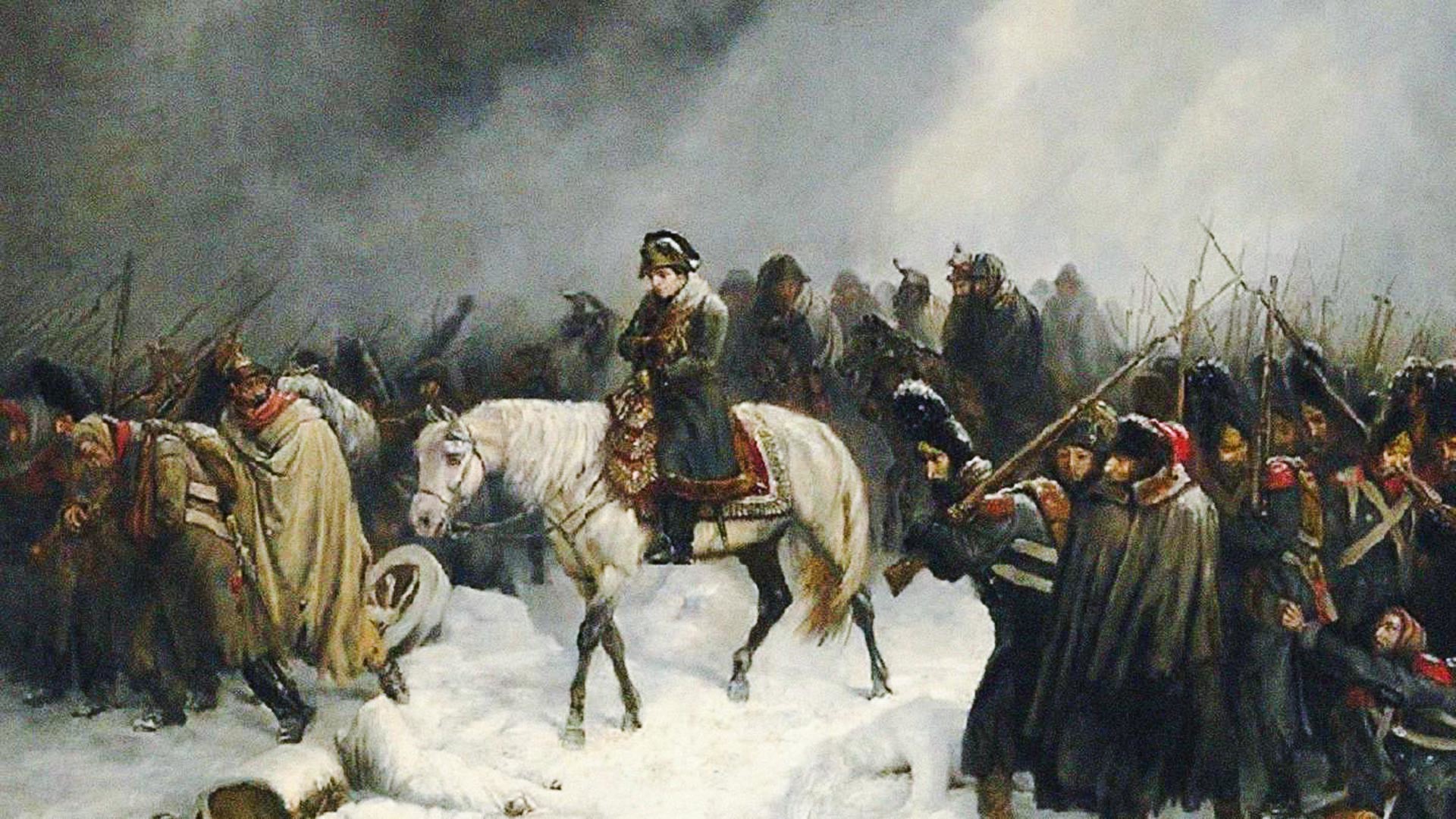 Adolph Northen
Defeating the French emperor on the battlefield was no walk in the park, so to speak. But the Russian army did it on several occasions. 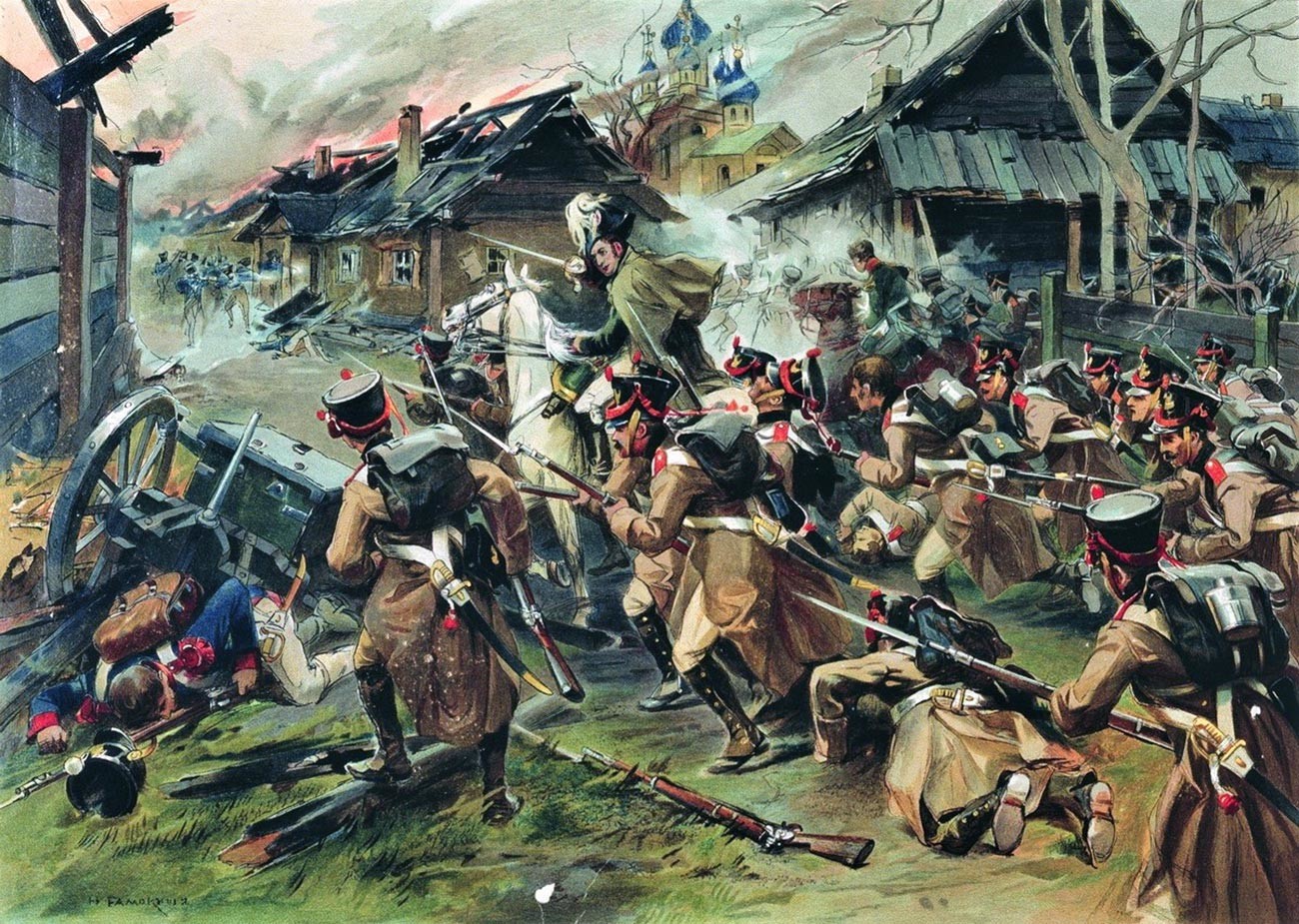 The Battle of Maloyaroslavets on 24 October 1812.

On Oct. 19, 1812, Napoleon’s Grande Armée, having idled away more than a month in Moscow, left the burned and devastated city on its retreat back through the western provinces of the Russian Empire, where it could wait out the winter. The emperor decided to make a detour to Kaluga in the south, where he planned to seize the rich stores of food intended for the Russian troops.

But the French were cut off by Russian forces under the commander-in-chief of the imperial army, Mikhail Kutuzov. On Oct. 24, the two sides clashed in the small town of Maloyaroslavets.

Eight times the unhappy town changed hands during the fierce fighting. By the end of the battle, almost nothing was left of it. “The streets could be distinguished only by the numerous corpses strewn all over them,” recalled eyewitness Eugene Labaume. “At every step, we came across severed arms and legs, and heads crushed by artillery. All that remained of the houses was a smoking pile of ash under which broken skeletons could be seen.”

In the end, Kutuzov ordered his troops to withdraw to the defensive positions in place south of the city. Although Maloyaroslavets remained in French hands, the Russians had won an important strategic victory. The French army, bled dry, did not attempt to break through to the storehouses in the direction of Kaluga, and instead beat a retreat along the ruined Smolensk road, which only in summer it had marched triumphantly down toward Moscow. 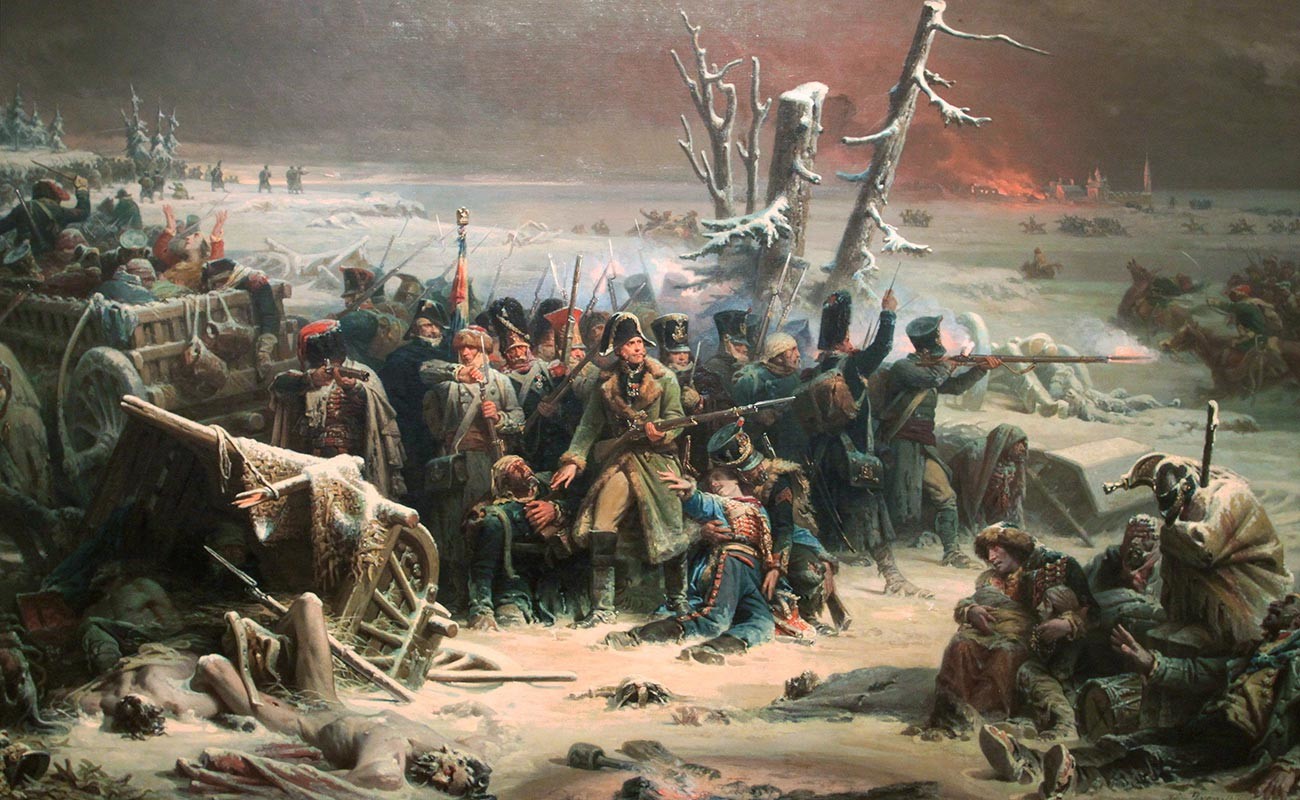 Marshal Ney Supporting the Rear Guard during the Retreat from Moscow.

Approaching the western borders of the Russian Empire along the Smolensk road, devastated by scorched-earth tactics, the Grande Armée was visibly disintegrating. There was a catastrophic shortage of provisions, almost all the horses had been lost, and now winter was setting in. If that were not bad enough, the French were constantly subjected to lightning raids by detachments of hussars and Cossacks, and ambushes by partisans.

Several Russian armies remained in close proximity to the French, waiting for a moment to attack the exhausted enemy. And when the column of French troops became overstretched along the road from Smolensk to the locality of Krasny, that moment came.

The result was a series of battles on Nov. 15–18, during which the Russian troops isolated and defeated, one by one, the corps of Prince Eugene de Beauharnais and Marshals Louis-Nicolas d’Avout and Michel Ney. Napoleon himself led the military operations near Krasny, intending to wait for the trailing troops to catch up. However, when the emperor was informed of the enemy’s intention to cut off his escape routes, he, together with his guard and part of his troops, broke through the Russian covering forces and headed west to the city of Orsha.

As a result of the battle at Krasny, the once mighty Grande Armée lost up to 10,000 men killed and wounded. A further 26,000 were taken prisoner by the Russians. “Whole crowds of French, at the mere appearance of our small detachments on the highway, immediately threw down their weapons,” recalled Colonel Denis Davydov of the Akhtyr Hussar Regiment.

Débâcle on the Berezina 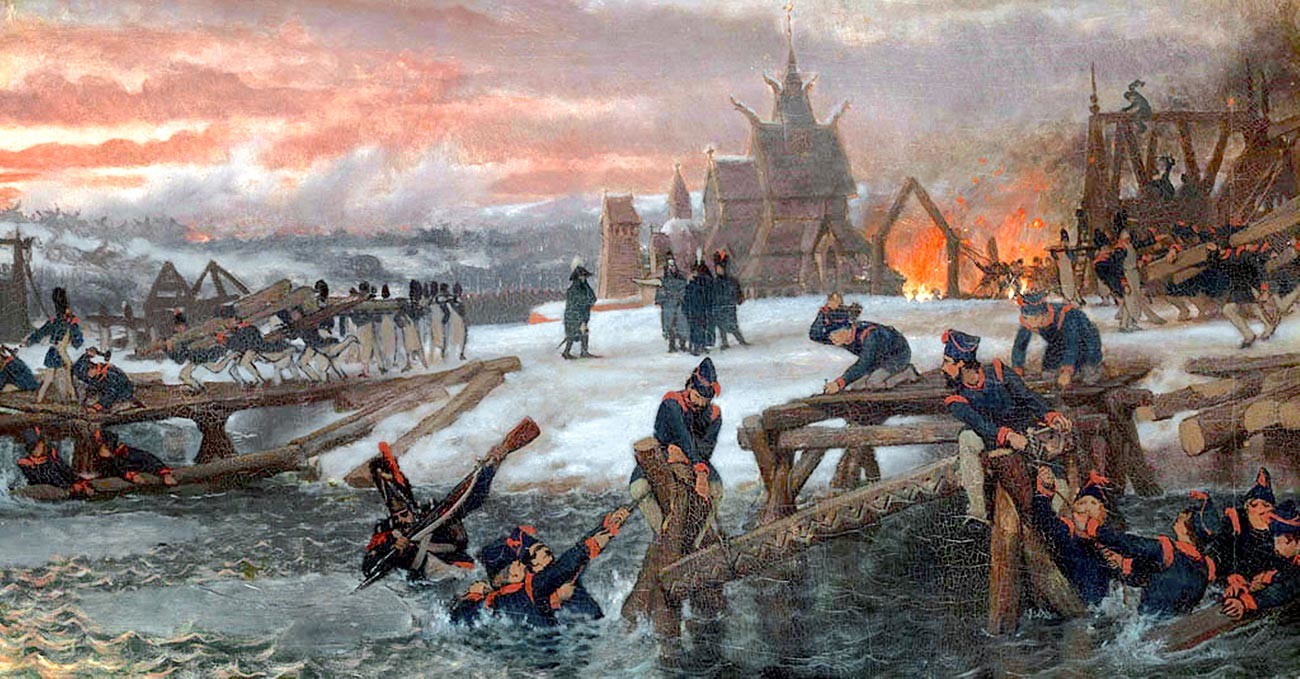 Crossing guides at Berezina in 1812.

If the battle at Krasny significantly weakened the Grande Armée, then the battle on the Berezina River destroyed it completely. To this day, the French use the expression c’est la Bérézina (“it’s Berezina”) to refer to a total wipeout.

On Nov. 24, Napoleon approached the Berezina River in modern-day Belarus, where the fresh 24,000-strong Russian Danube Army under Admiral Pavel Chichagov awaited them on the opposite bank. Napoleon had almost 80,000 soldiers, but only half of them were in a condition to stand upright and hold a weapon.

With a feint, Napoleon managed to conceal his real river crossing point from Chichagov. However, not all his men had reached the other side when, on Nov. 28, the Danube Army and the 35,000-strong army of General Peter Wittgenstein, having approached from the north, attacked the French.

As the Russian troops advanced, panic and chaos set in at the crossing point. The French resisted fiercely, fighting from early morning until late at night. “Everything was mixed up in the desperate struggle,” recalled 3rd Swiss Regiment soldier Jean-Marc Bussy: “We could no longer shoot. We fought only with bayonets and rifle butts... A bunch of people were lying in the snow. Our ranks were thin as hell. We no longer dared to look left or right for fear of not seeing our comrades there... It was carnage all around!”

Napoleon, together with his general staff, guard and some troops, managed to escape the trap, but his army suffered huge losses. Up to 50,000 were killed, captured or drowned in the freezing waters of the Berezina. Russian losses were estimated at 4–10 thousand.

'Battle of the Nations' 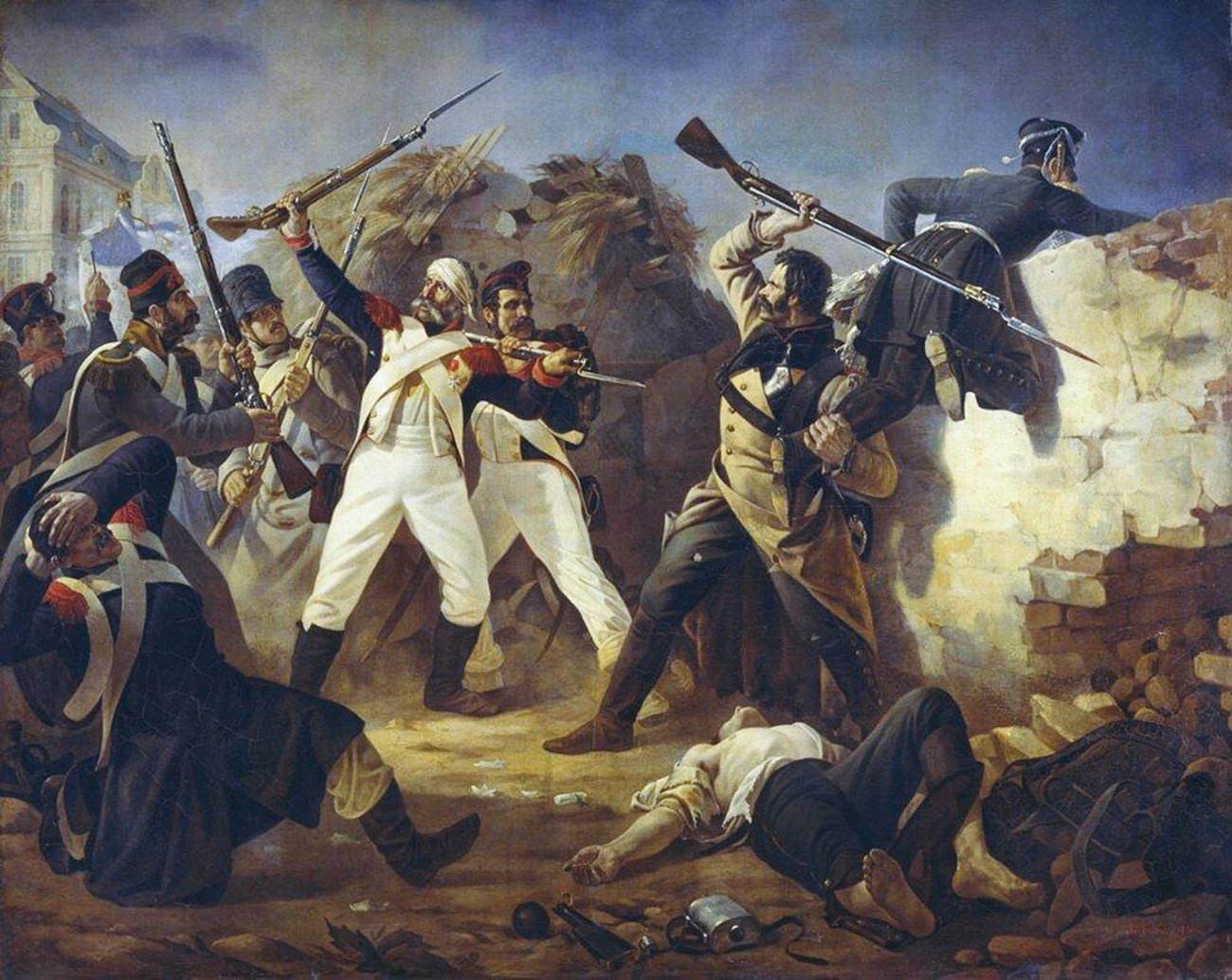 The Feat of the Grenadier of the Finland Life Guards Regiment Leontiy Korennoi in the 1813 Battle of Leipzig.

The Battle of Leipzig, also known as the “Battle of the Nations”, involved the armies of a dozen states, totaling up to half a million combatants. Not until WWI a century later did the world see a battle of such scale and bloodshed.

Russian troops made up the main striking force among the armies of the Sixth Coalition, accounting for almost half of the 300,000-strong allied force. The French emperor, in turn, had around 200,000 soldiers at his disposal.

For four days, fierce fighting raged near Leipzig in Saxony in modern-day Germany, at the start of which Napoleon very nearly seized victory. On Oct. 16, the cavalry of Marshal Joachim Murat broke through the center of the allied forces, coming within just 800 meters of the general headquarters of the Russian, Prussian and Austrian monarchs. The situation was saved by the Russian Imperial Leib Guard, which held off the enemy until reinforcements arrived.

The turning point in the battle was the sudden defection of Napoleon’s Saxon allies to the Sixth Coalition. They were followed by the Westphalian, Württemberg and Baden units. The resulting hole in the lines had to be urgently plugged by the emperor’s own guard.

Ultimately, the French lost the battle. During the retreat, sappers were overly hasty in blowing up the bridge over the Weisse-Elster River, thus cutting off the escape route for the 20,000-strong French rearguard. In total, Napoleon lost up to 80,000 soldiers killed, wounded or captured. The losses of the armies of the Sixth Coalition are put at 54,000.

The defeat at Leipzig had disastrous consequences for Napoleon. He lost his last major ally, Bavaria, which went over to the side of his opponents. Soon, the French had to retreat from German and Dutch soil to focus on defending their native land. As Baron Friedrich von Müffling, a colonel in the Prussian General Staff, wrote: “Thus did the four-day battle of the nations at Leipzig decide the fate of the world.”