How the Bolsheviks tried to Sovietize Iran 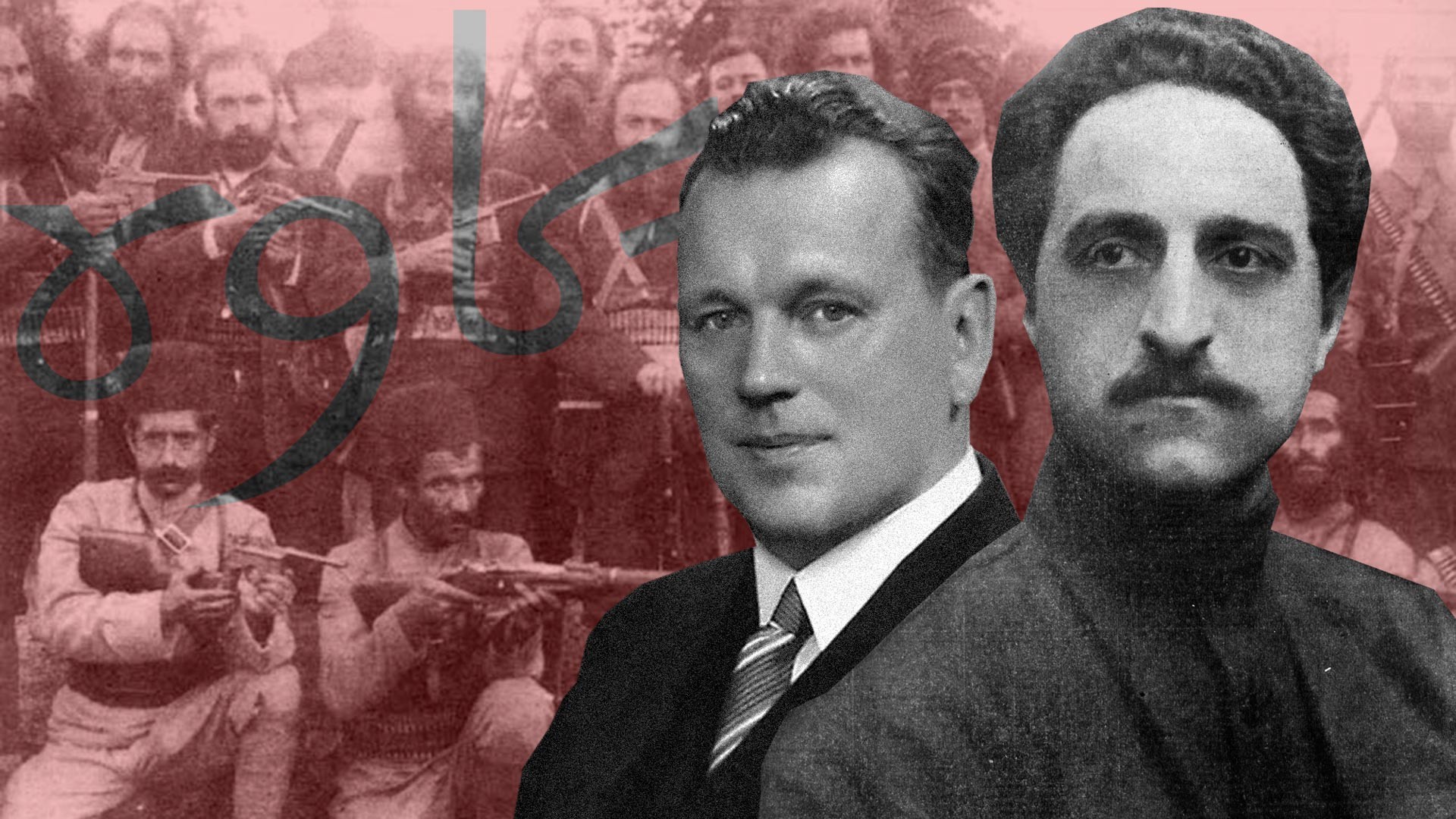 Russia Beyond (Photo: Public Domain)
While the Civil War was still raging in Russia, the Soviet leadership was already thinking about how to ignite the flame of socialist revolution in Asia.

On May 18, 1920, Soviet sailors unexpectedly disembarked in the Iranian port of Enzeli [today Anzali]. Their goal was to seize the fleet of their main adversaries in the Civil War - the Whites - which was stationed there. As it turned out, it was just the first phase of a campaign to establish a Communist regime in Iran.

The Caspian Flotilla of the White Movement was forced to withdraw to Iran when, by spring 1920, the main forces of the Whites in southern Russia had either been destroyed or had retreated to Crimea. In Enzeli, their ships were under the protection of the British, who were hostile to the Bolsheviks and had maintained their forces in Iran ever since World War I. 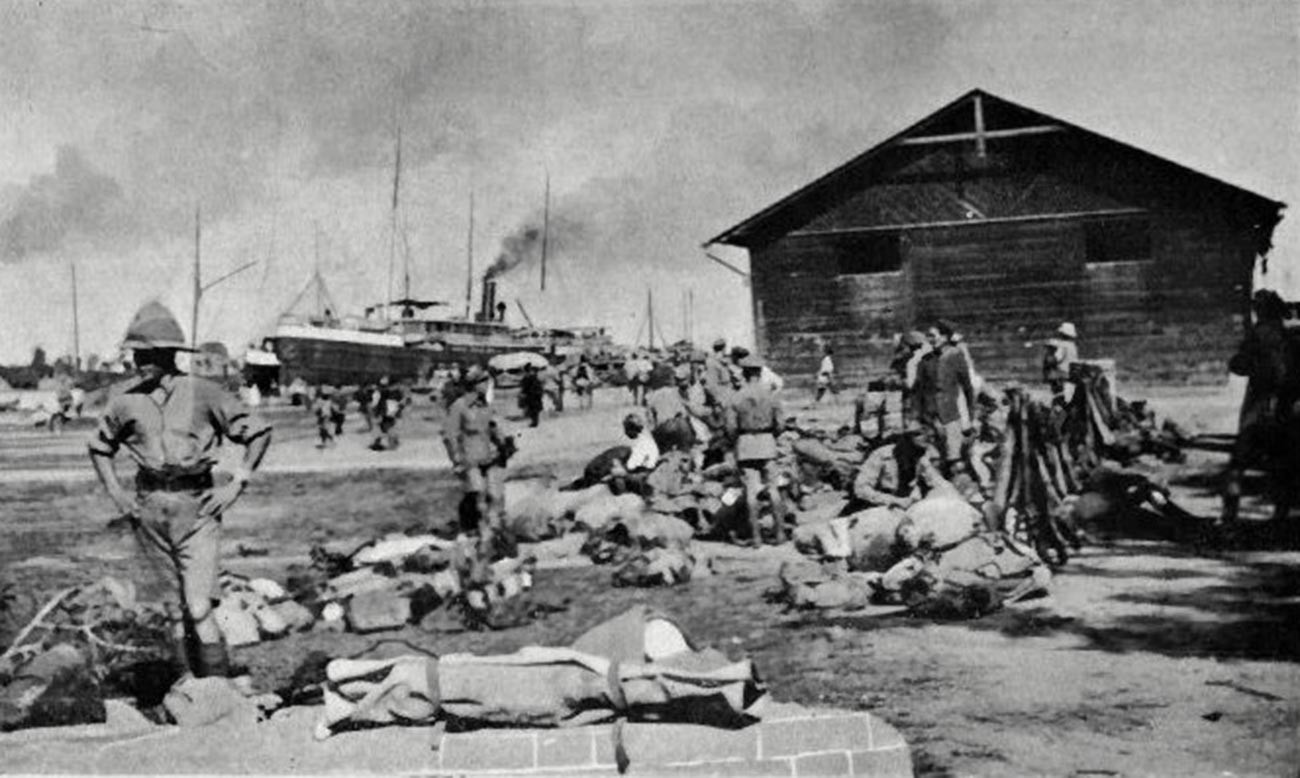 The 29 ships of the White flotilla could have created big problems for Soviet lines of communication in the Caspian Sea. The Bolshevik leadership decided to seize them as soon as possible. To avoid a diplomatic scandal, they disguised the operation as the personal initiative of the commander of the Soviet Volga-Caspian Flotilla, Fyodor Raskolnikov.

At 19 minutes past five on the morning of May 18, the Soviet flotilla, having covertly approached, opened fire on the port. “One not so beautiful morning, we were awakened by gunfire and shells falling in the midst of the port and our ships,” recalled Anatoly Vaksmut, a White officer. “Climbing up the masts, we saw a large number of ships out at sea firing at Enzeli. There was total confusion at the British headquarters and none of their artillery batteries responded to the Reds’ fire. It emerged that the British had pretty much fled the batteries in their underwear.” 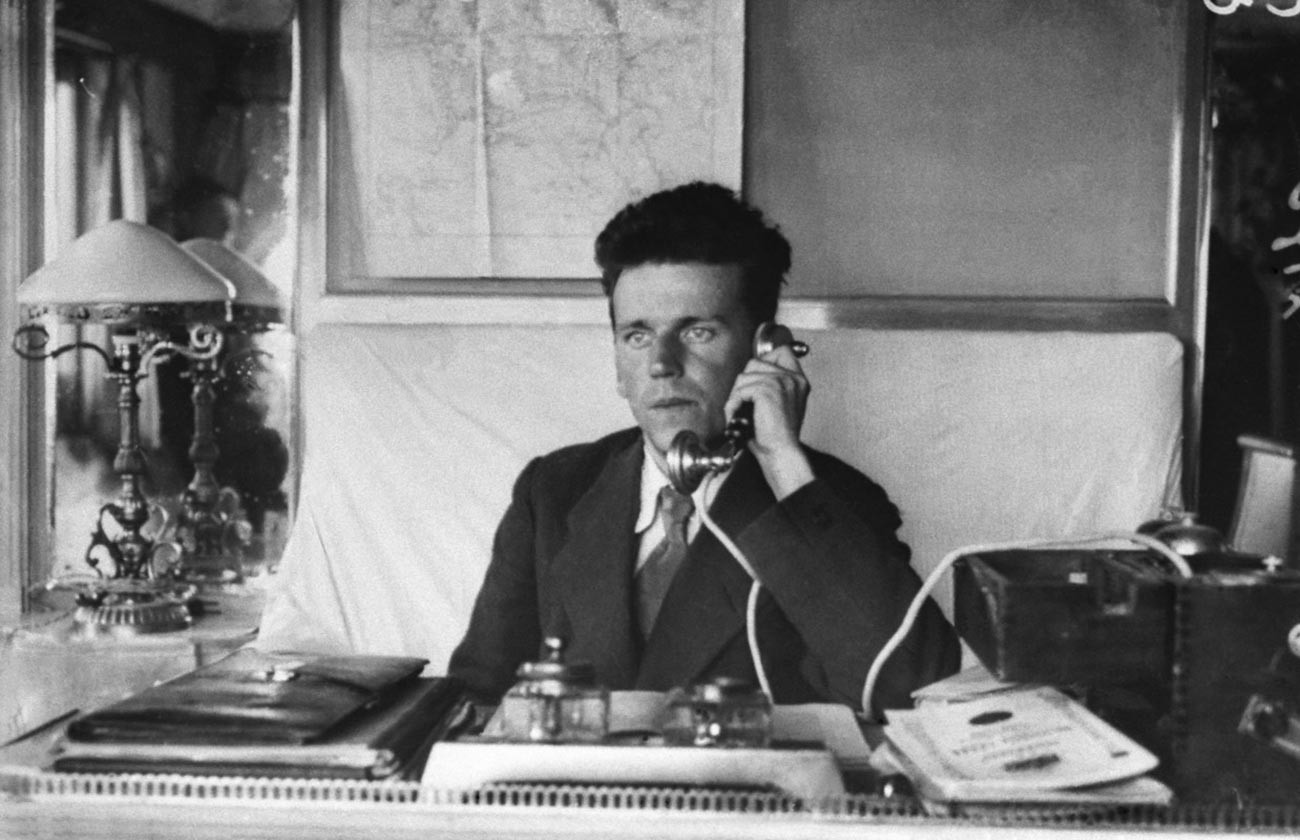 The landing force quickly suppressed the resistance it encountered from the 36th Indian Infantry Brigade and, soon, the enemy requested a ceasefire. Under the agreement, both the British and the White Guards withdrew from the city, abandoning to the Bolsheviks not only all the ships, but also 50 pieces of artillery, 20,000 shells and large reserves of cotton, rails, copper and other goods.

The Shah’s forces didn't put up any resistance to the Soviet sailors. A weakened Iran, which in the preceding years had essentially become a semi-colony of the European powers, merely sent a note of protest. 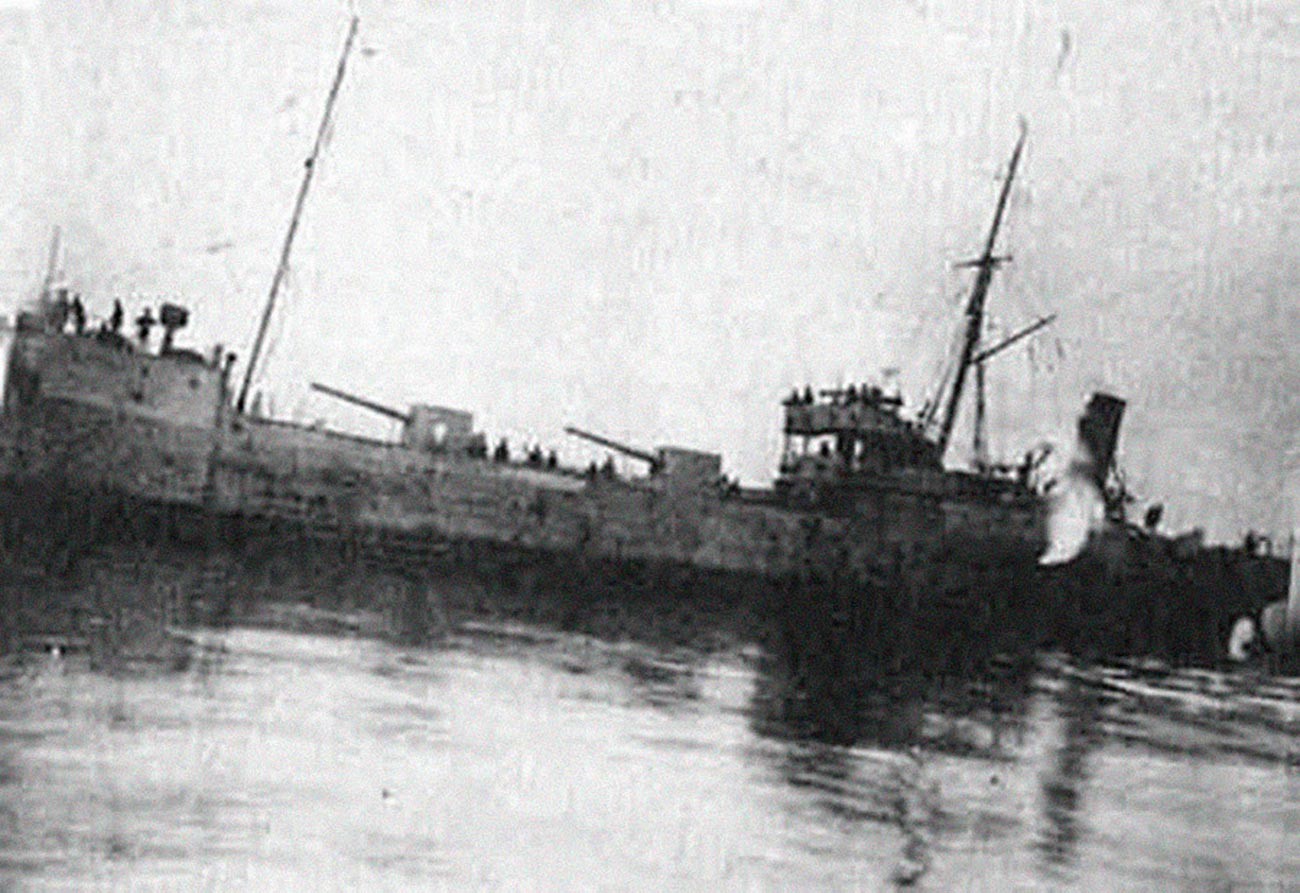 The Soviet troops intended to withdraw from Iran within a short space of time, but the situation changed drastically. Taking advantage of, and heartened by, the blow struck against the British, the anti-government partisan Jangal Movement (“forest movement”) launched a large-scale offensive in the north of the country. Its leader, Mirza Kuchak Khan, asked the Bolsheviks for support, but stipulated the condition that Moscow should not interfere in the internal affairs of the Iranians.

The leadership of Soviet Russia glimpsed the tantalizing prospect of carrying out a socialist revolution in Asia. “Without particular difficulty we can blow up the whole of Persian Azerbaijan (the northwest region of Iran, populated mainly by Azeris - Russia Beyond) - Tabriz...,” was the argument put forward by Sergo Ordzhonikidze, chief of the Caucasus Bureau of the Central Committee of the Rusian Communist Party (Bolsheviks). He went on: “My view is this: With the help of Kuchak Khan and the Persian Communists, Soviet power should be proclaimed, cities seized one after another and the British driven out. This would make a colossal impression on the whole of the Near East.” 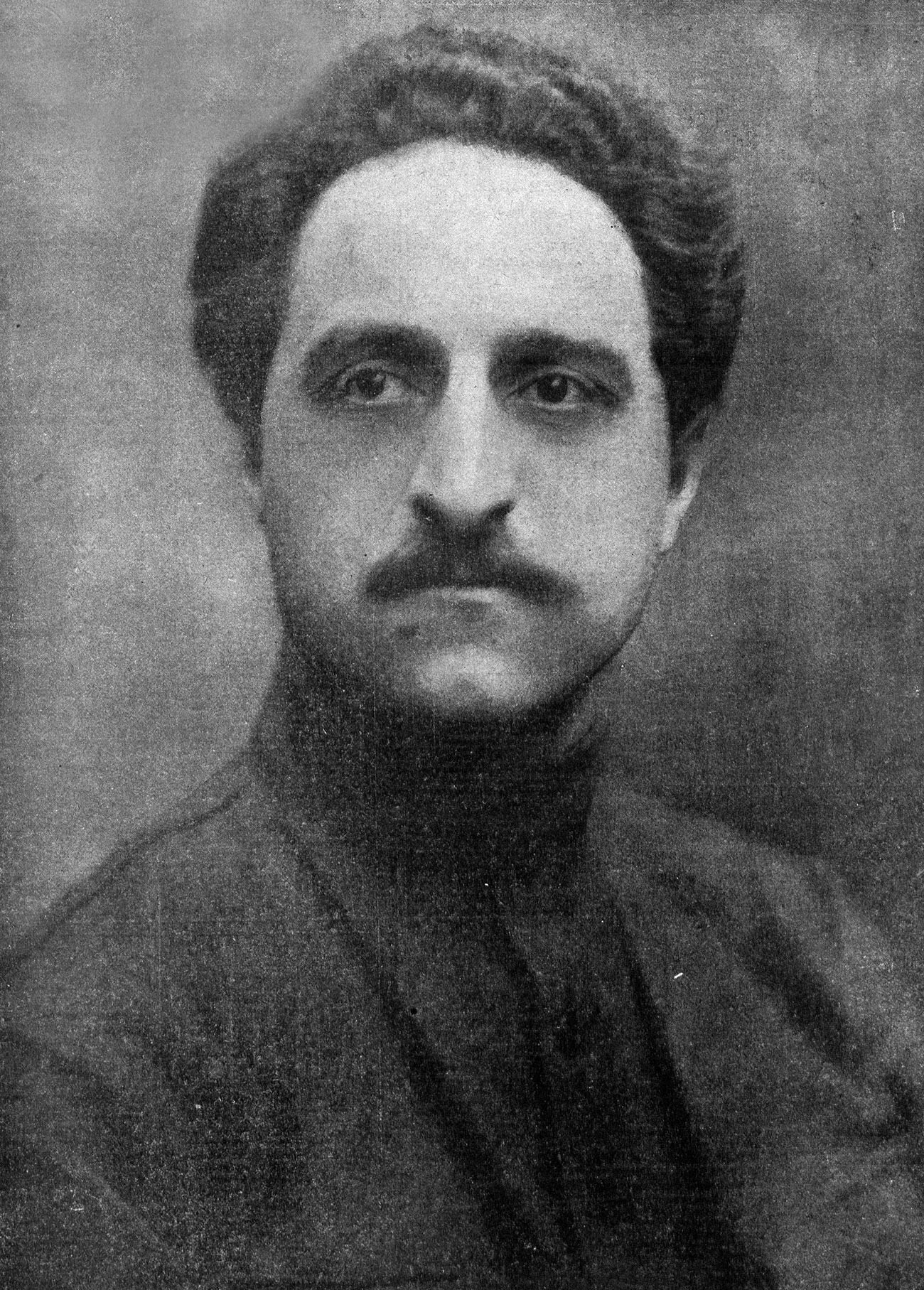 Even though the Civil War in Russia had not yet ended, the Bolsheviks still decided to fight for “the cause of world revolution” in Iran. Kuchak Khan was promised weapons, money, volunteers, instructors, airplanes and armored cars. Leon Trotsky, the people’s commissar for military affairs, ordered large-scale Soviet agitation to be secretly organized in the country.

Once again striving to avoid a diplomatic fuss, Moscow did not act directly but through its allies - in this case, the recently-established and at that time independent Azerbaijan Soviet Socialist Republic. The troops sent into the region acted either as volunteers, or operated under the Azerbaijani flag. For Baku itself, assisting an Iranian revolution was of enormous significance - Baku dreamed of reunification with Iranian Azerbaijan. 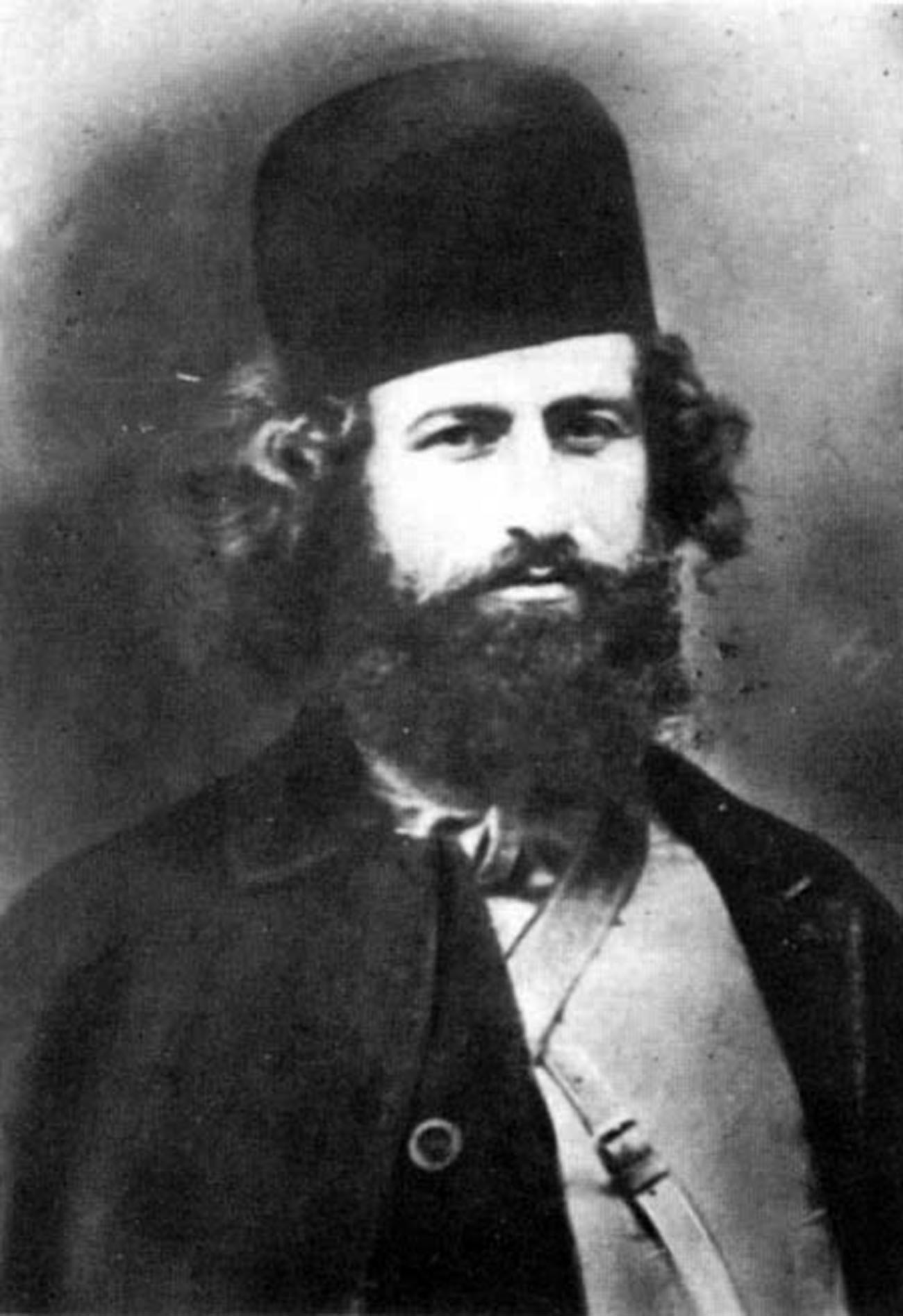 Officially, Soviet troops were being withdrawn from Enzeli. In actual fact, the exact opposite was happening: Soldiers and weapons were ceaselessly being brought across the Azerbaijani border into northern Iran. On June 4, with the support of his new allies, Mirza Kuchak Khan seized the capital of the Ostan (Province) of Gilan - Rasht.

The next day, the Gilan Soviet Socialist Republic was proclaimed in the north of Iran, with Kuchak Khan at its head. Despite the stipulation of non-interference in Iran's internal affairs, the Provisional Revolutionary Government included several Soviet representatives who had adopted Iranian citizenship. 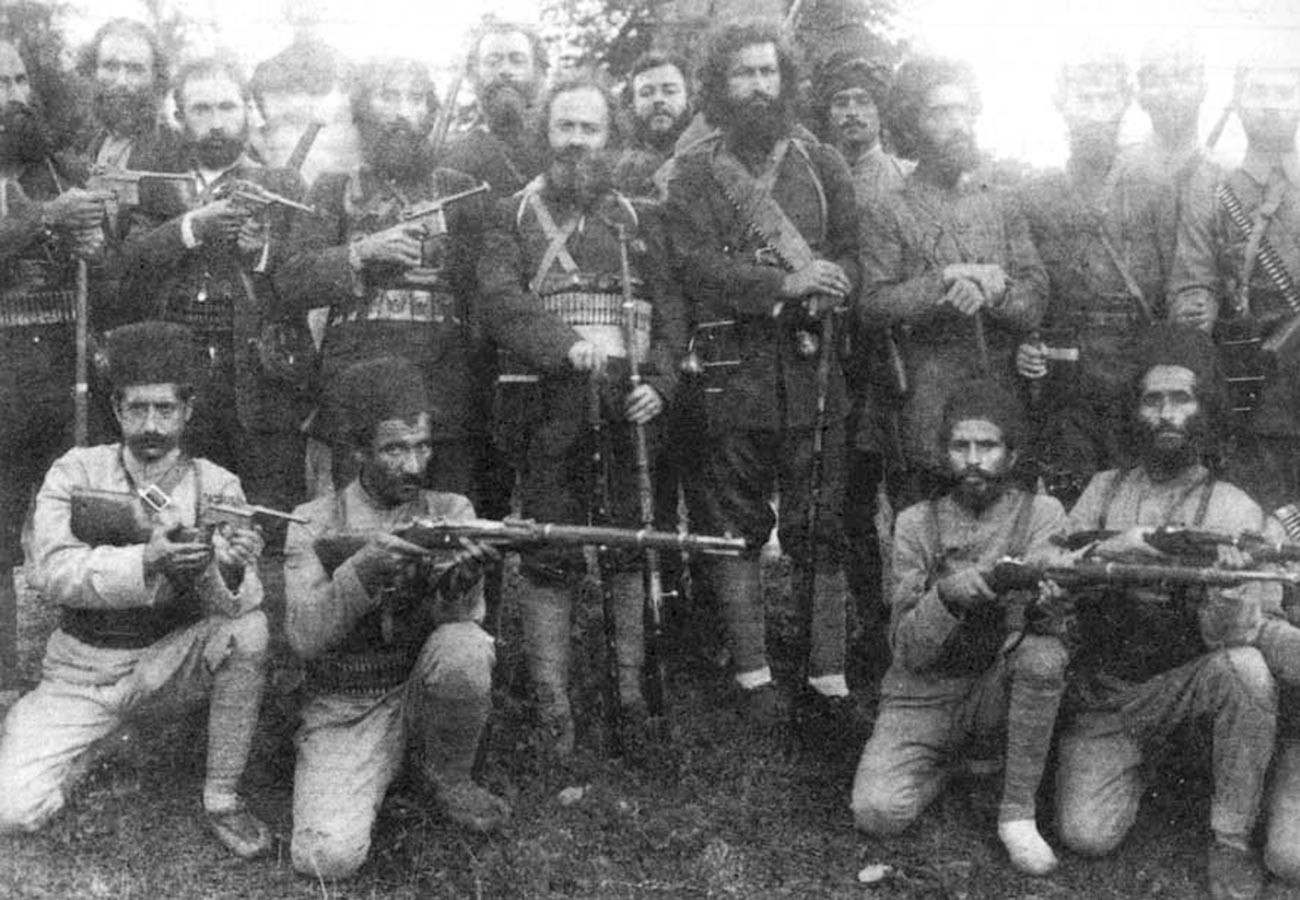 Mirza Kuchak Khan with his supporters.

An Iranian Red Army numbering up to 5,000 men was formed from the detachments of “volunteers” arriving from Baku and Astrakhan, as well as local partisans. Initially, it was commanded by Ehsanollah Khan, an associate of Mirza Kuchak Khan, but soon Moscow ruled that command of it should pass to its own man, Vasily Kargareteli.

Relations between the Jangala Movement and the Iranian Communists soon started deteriorating precipitously. While the latter were convinced of the necessity of “blowing up the whole of Asia”, Mirza Kuchak Khan believed in acting cautiously and being content for the time being with what had already been achieved - namely, Gilan. The sides also failed to find common ground in their stance on private property. 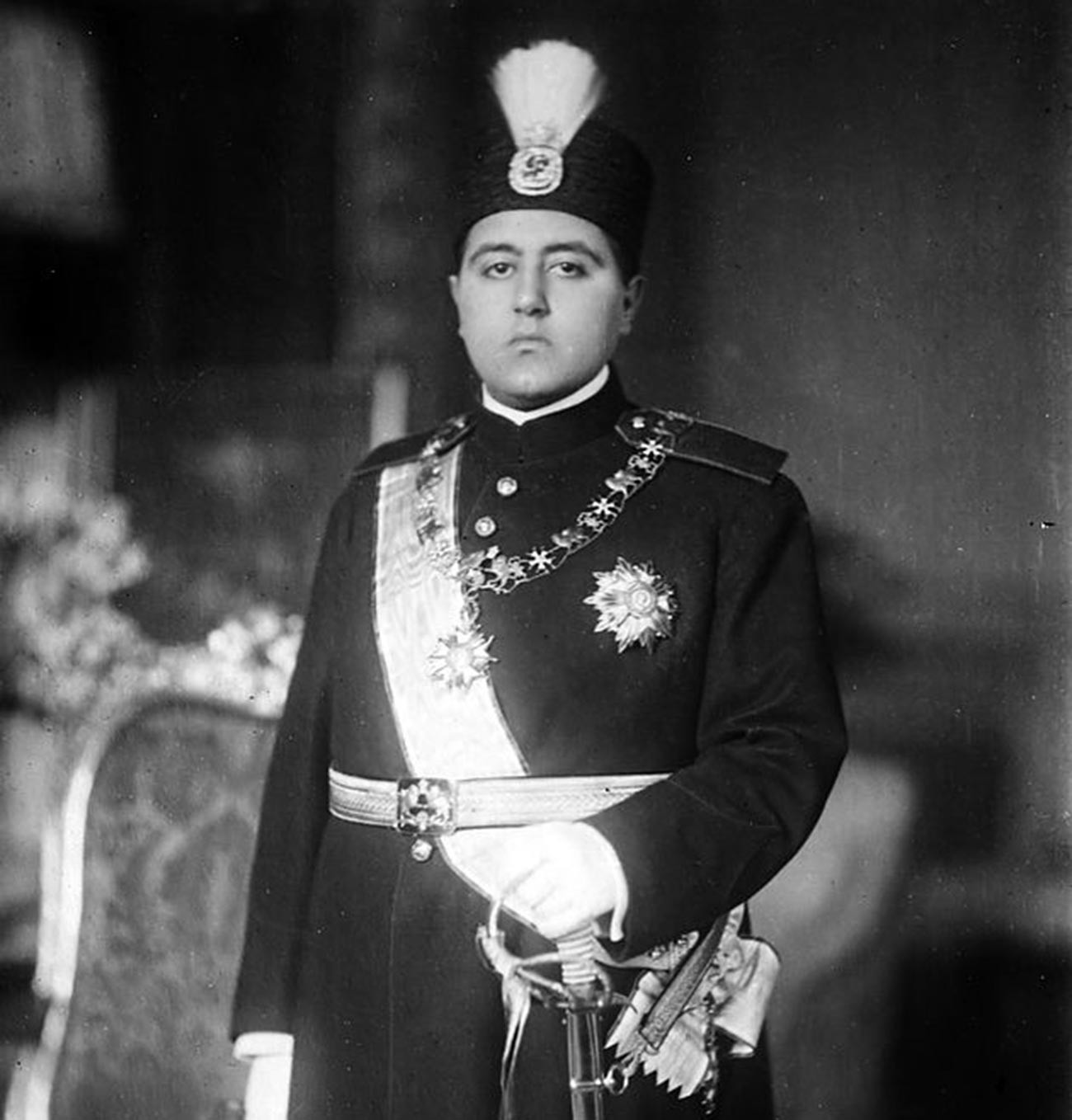 As a result, Kuchak Khan was ousted by the Iranian Communists on July 31, and fled to the town of Fuman, along with his supporters. His now former comrade-in-arms Ehsanollah Khan took charge of a new provisional government. “Soviet Persia will survive without him. Kuchak is useful as a popular figure, but he is something of a liability in his complete failure to understand revolutionary politics and in his excessive slowness and caution. He does not know how to take risks, while that is what is currently needed,” commented Georgy Chicherin, people’s commissar for foreign affairs of Soviet Russia, in reference to these events.

The collapse of the Iran adventure

Without wasting any time, the new government of the Gilan SSR mounted an offensive against Tehran in mid-August 1920, which ended in a heavy defeat. The Iranian Red Army was rescued from total disaster by troops sent from Azerbaijan and Soviet Russia. 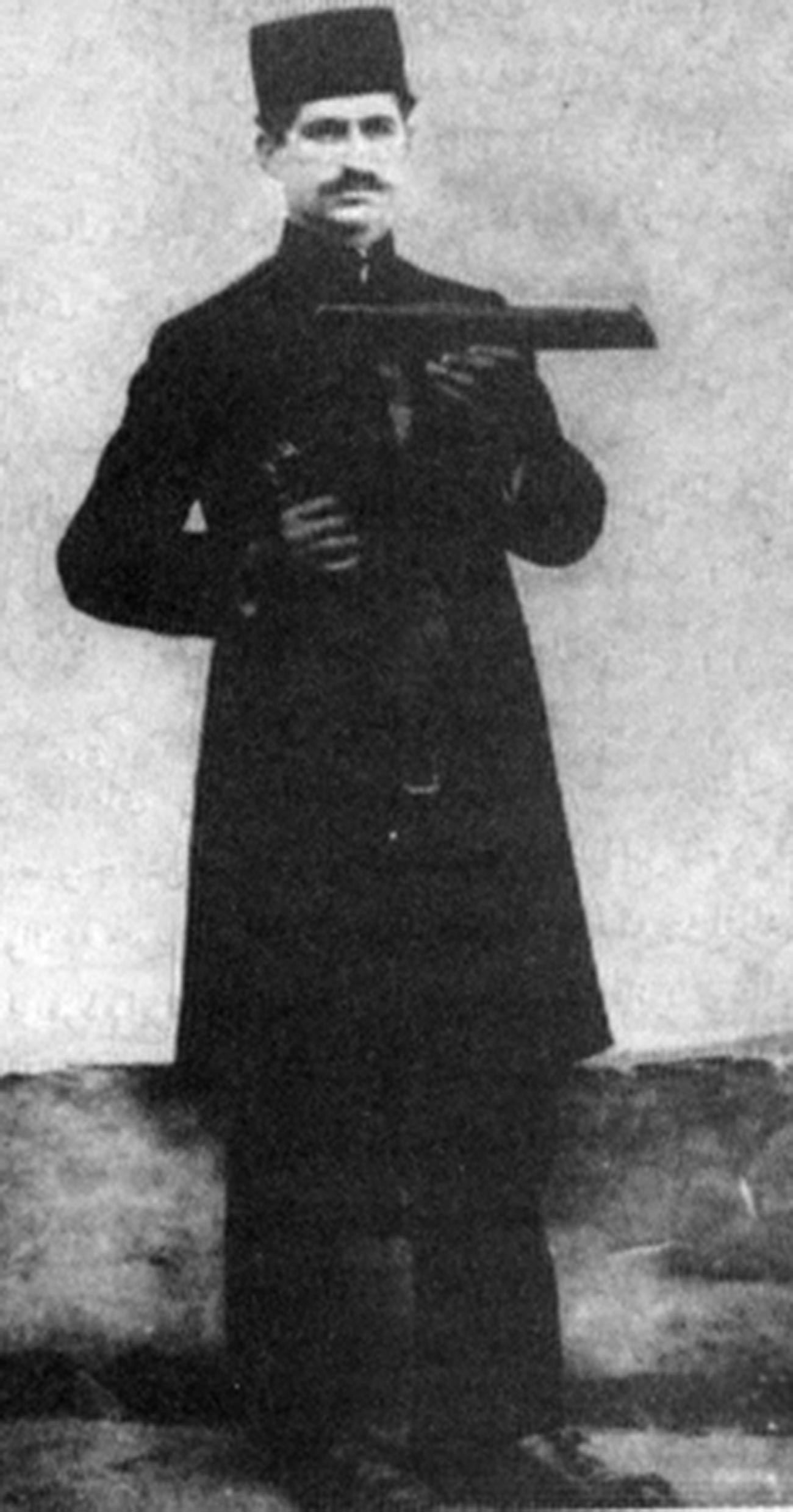 Things didn’t go any better for the Iranian Communists in domestic politics. In implementing hasty reforms, they failed to take account of local traditions and casually did away with centuries-old customs and ways of doing things, thus provoking intense outrage among the local population. Fuel was added to the flames by the British and the government of Sultan Ahmad Shah, who mounted large-scale anti-Soviet propaganda in the region.

The chances of Sovietizing Iran were dwindling fast. To investigate what was going on, a member of the Politburo of the party’s Central Committee, Iosif Stalin, arrived in Baku. He soon dispatched a bleak report to Lenin in Moscow, in which he said that only a bourgeois revolution was possible in Iran, supported by the middle classes.

In late September, Soviet Russia started negotiations with Tehran, which concluded on February 26, 1921 with the signing of a Soviet-Iranian friendship treaty. Moscow and Baku withdrew their support from the Gilan Republic and began to pull out their troops, but not before the British Empire started evacuating its soldiers from the country in May of that year. 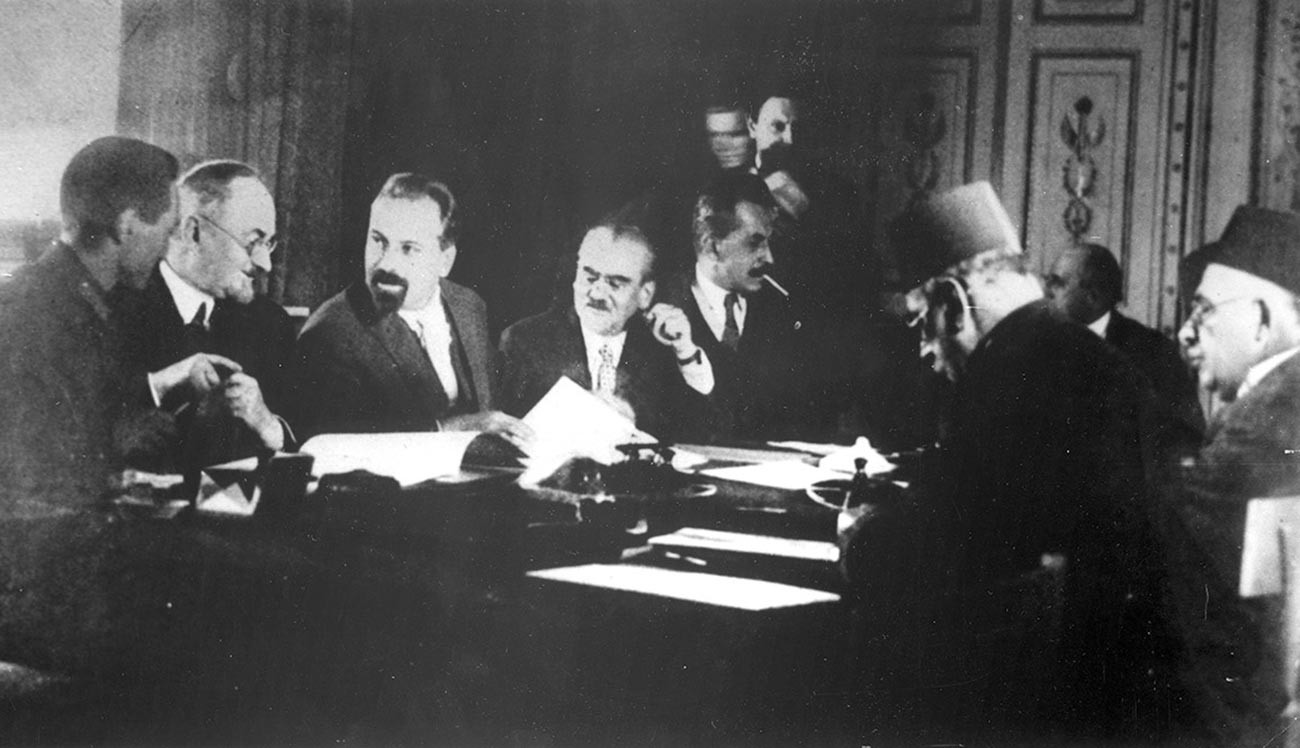 Conclusion of the Russo-Persian Treaty of Friendship, 1921.

In July 1921, the Communists of Gilan mounted another desperate offensive against Tehran, which again ended in failure. In November the republic was smashed by Ahmad Shah’s troops and the government of Ehsanollah Khan fled to Baku (in 1938 he was shot in the ‘Great Terror’ in the USSR). The Jangal Movement’s forces were also crushed, and the head of Mirza Kuchak Khan was put on public display in Rasht.

Soviet and British troops returned to Iran 20 years later, but this time they were operating in a spirit of cooperation. In August-September 1941, as a result of a joint operation codenamed Operation Countenance, they occupied the northern and southwestern regions of the country, deposed the German sympathizing Shah Reza Shah Pahlavi and turned Iran into a state friendly to the anti-Hitler coalition.