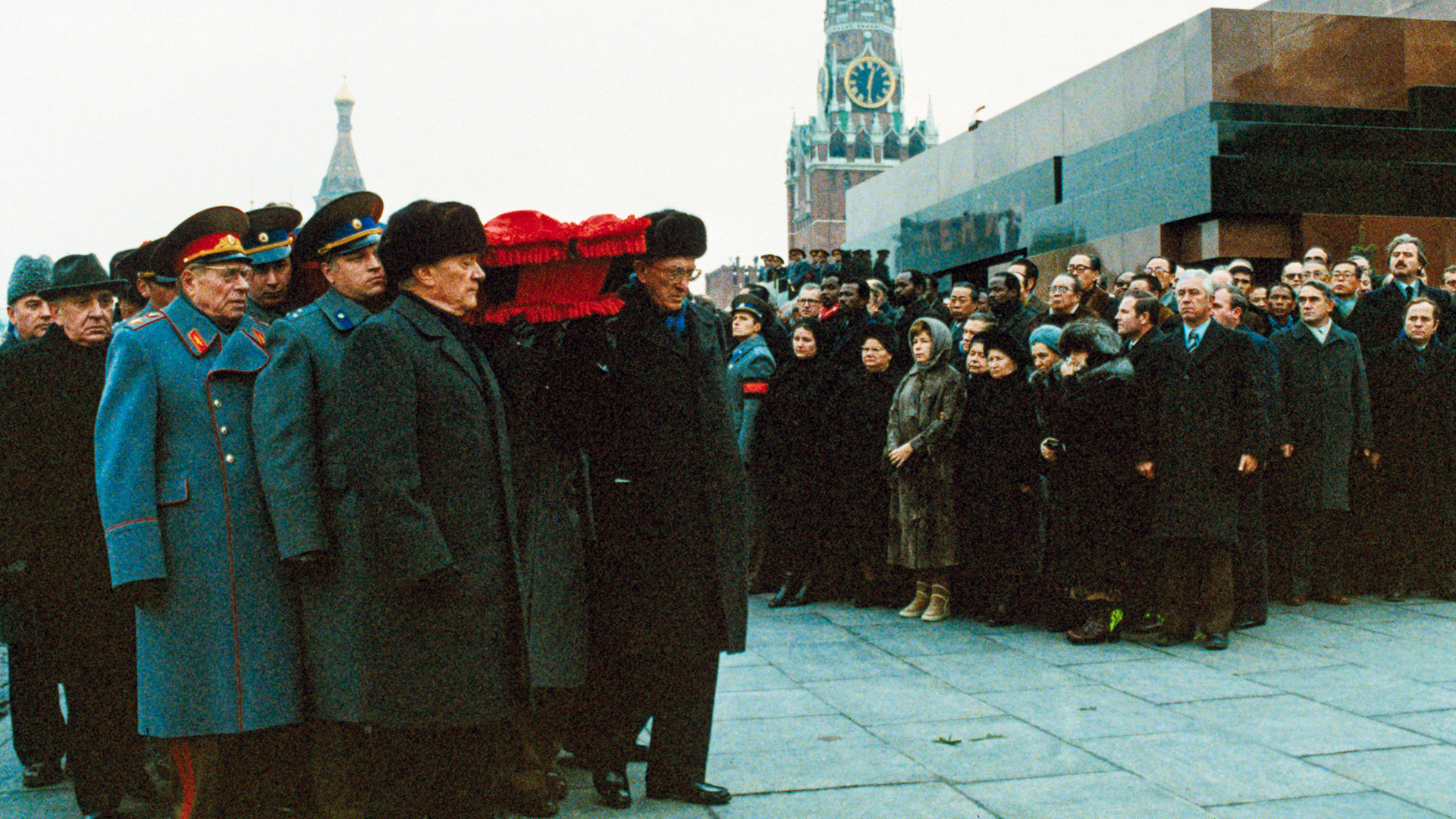 Leaders of the Communist Party of Russia bear the casket of Leonid Brezhnev, former Communist Party leader, in front of the Tomb of Lenin in Red Square during the funeral procession.

Bettmann/Getty Images
No one did funerals like the Soviet Union. Leaders, in particular, were buried with their own bodyweight in honors, and huge crowds of people gathered to bid farewell to famous figures. 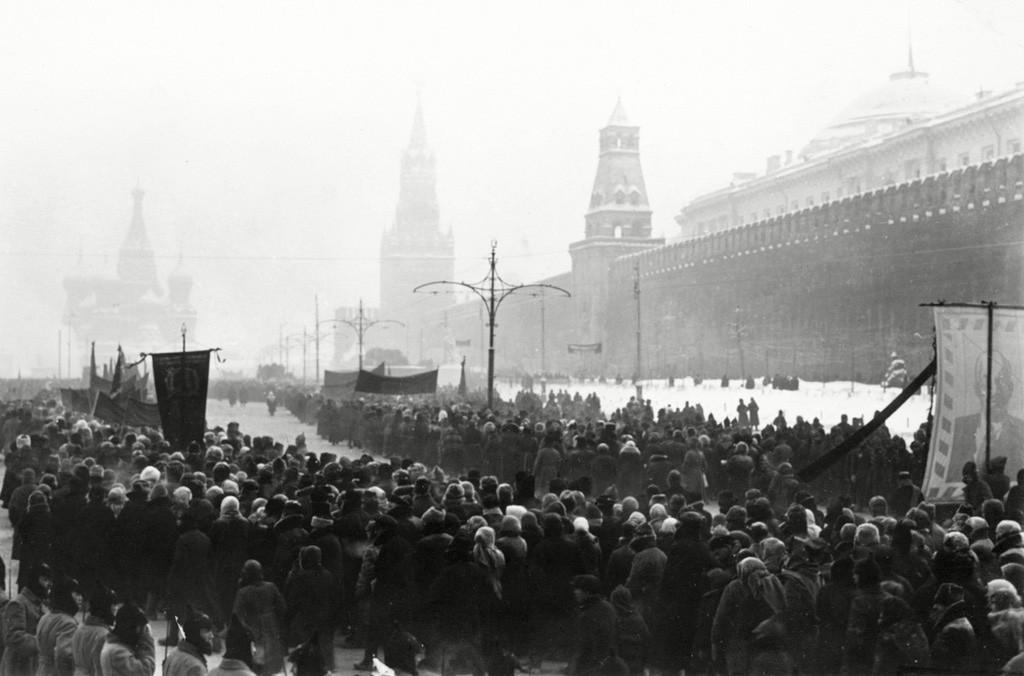 The standard-bearer of world socialism died on Jan. 21, 1924. From his Gorki estate outside of Moscow, his body was taken to the capital, where the last respects were paid in the Pillar Hall of the House of Unions and lasted for five days! Some sources claim that up to half a million people came to bid farewell. 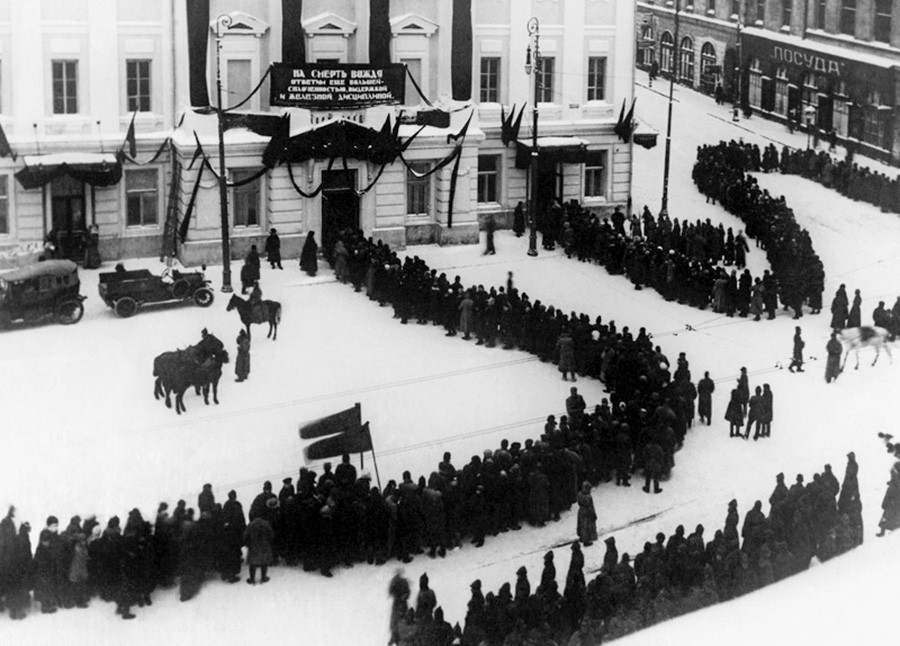 The decision to embalm Lenin's body had in fact been taken almost a year before his death. On Jan. 27, 1924, the coffin with his body was placed in a temporary wooden mausoleum on Red Square, later replaced by the stone structure that still stands today. In Soviet times, there was always a snaking line of people outside eager to pay homage. 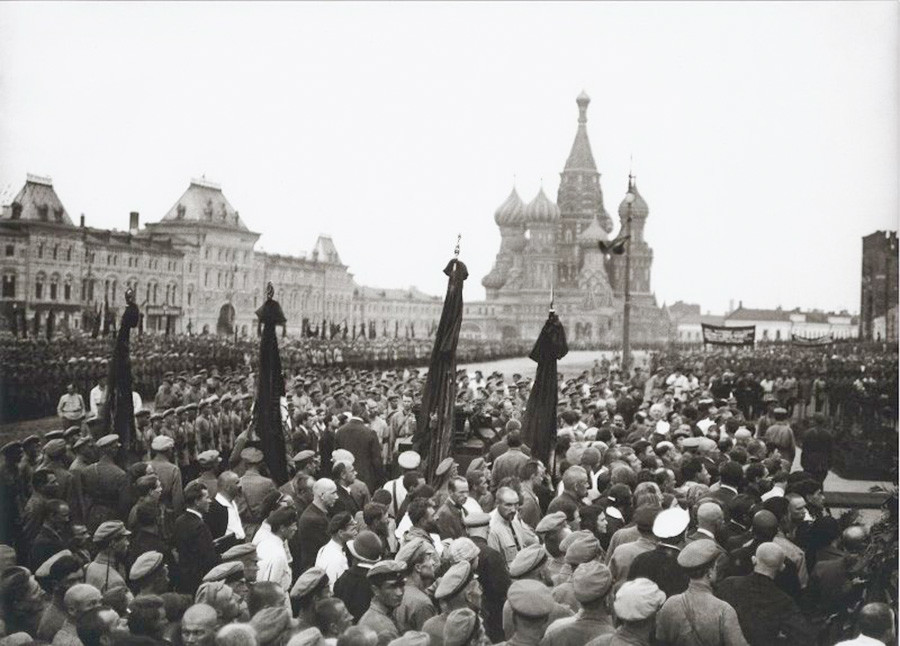 Today, “Iron Felix” is one of the most controversial figures of the Soviet era. He is known as the architect of the Soviet secret police and the creator of the machinery for repressing counter-revolutionary activity. He died on July 20, 1926, of a heart attack; his funeral was swarming with employees of his department, the State Political Directorate (which succeeded the Cheka), and other ardent Bolshevik supporters. His ashes were buried by the Kremlin wall. 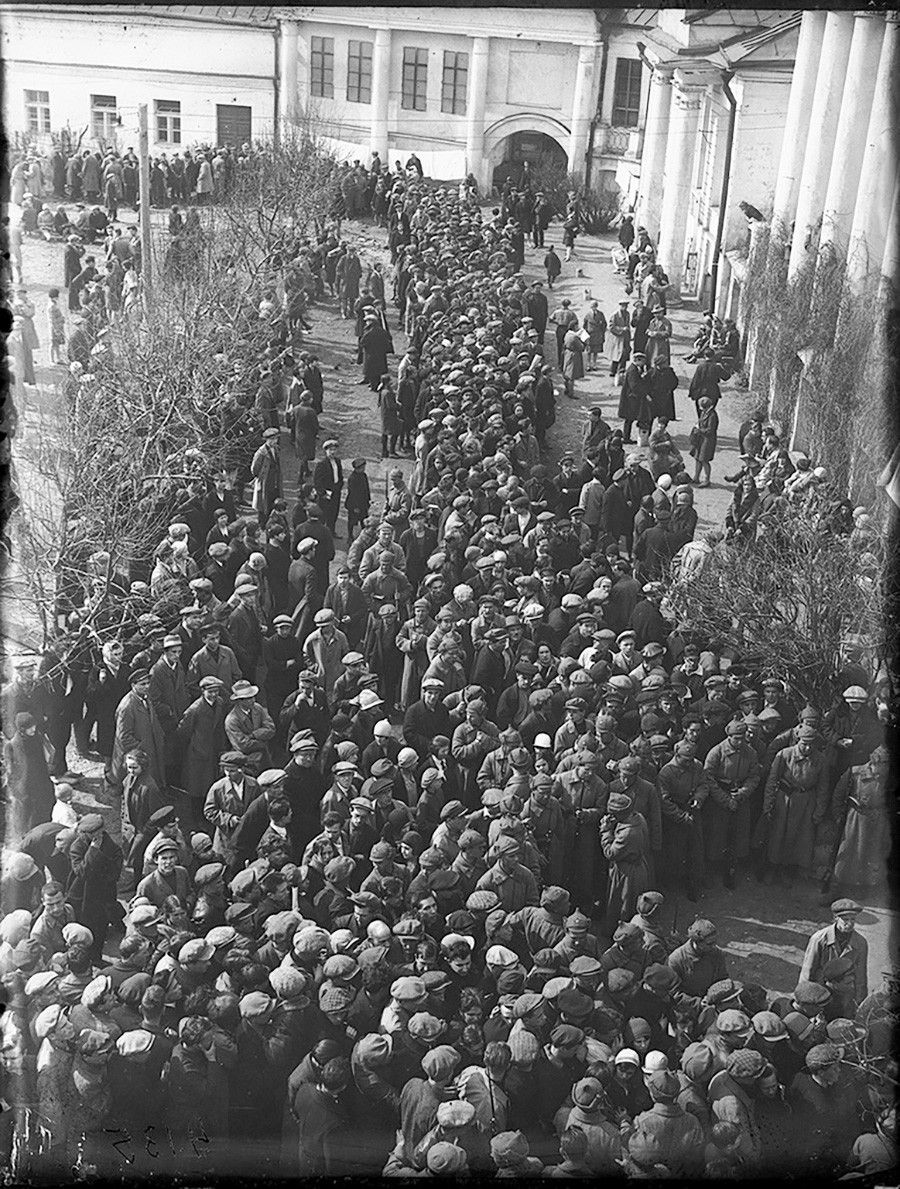 The death of the people’s poet, Vladimir Mayakovsky, was a huge blow to ordinary folk. He committed suicide on April 14, 1930, at the age of 36. The funeral procession stretched throughout Moscow. The urn bearing his ashes was buried at Novodevichy Cemetery. 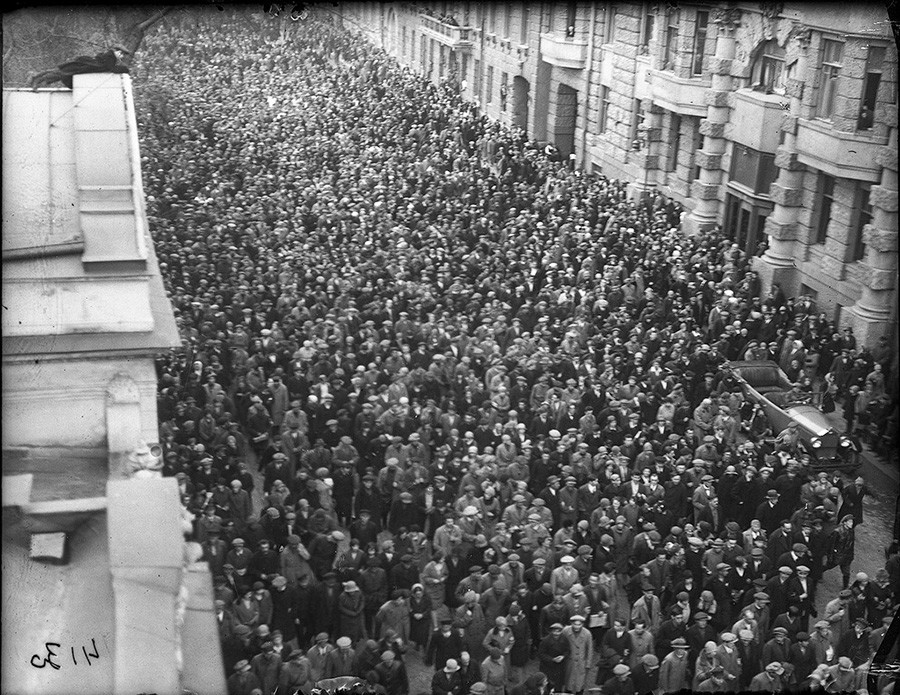 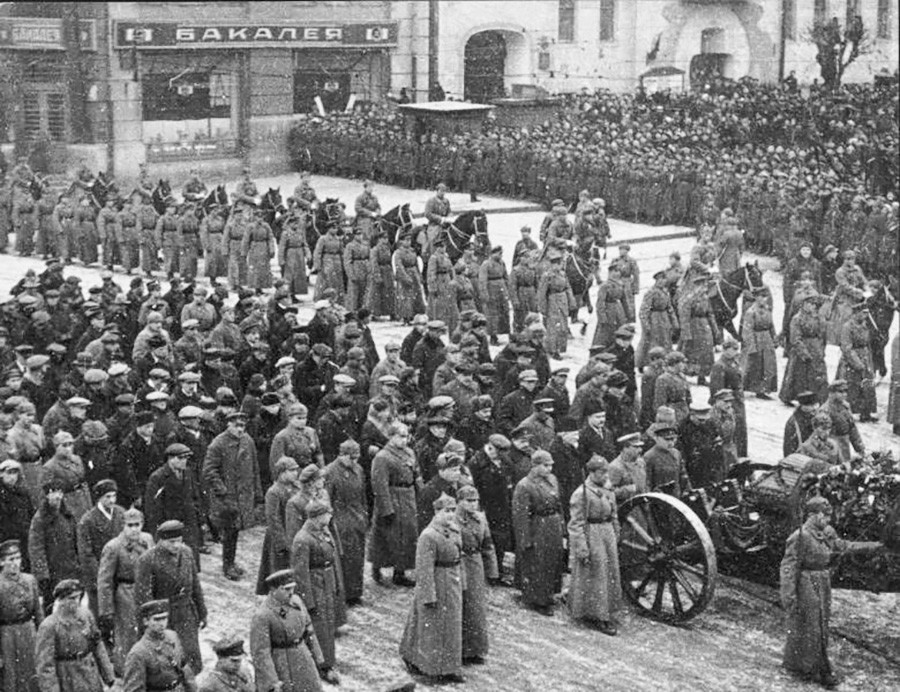 On Dec. 1, 1934, the head of the Leningrad branch of the Communist Party, Sergei Kirov, was assassinated right at his place of work. Not only was Kirov's killer executed, but his entire family and even distant relatives. In the aftermath, huge numbers of internal party opponents were arrested on suspicion of conspiracy to murder. It is rumoured that Stalin himself ordered the hit on his loyal ally in order to frame and purge his rivals. 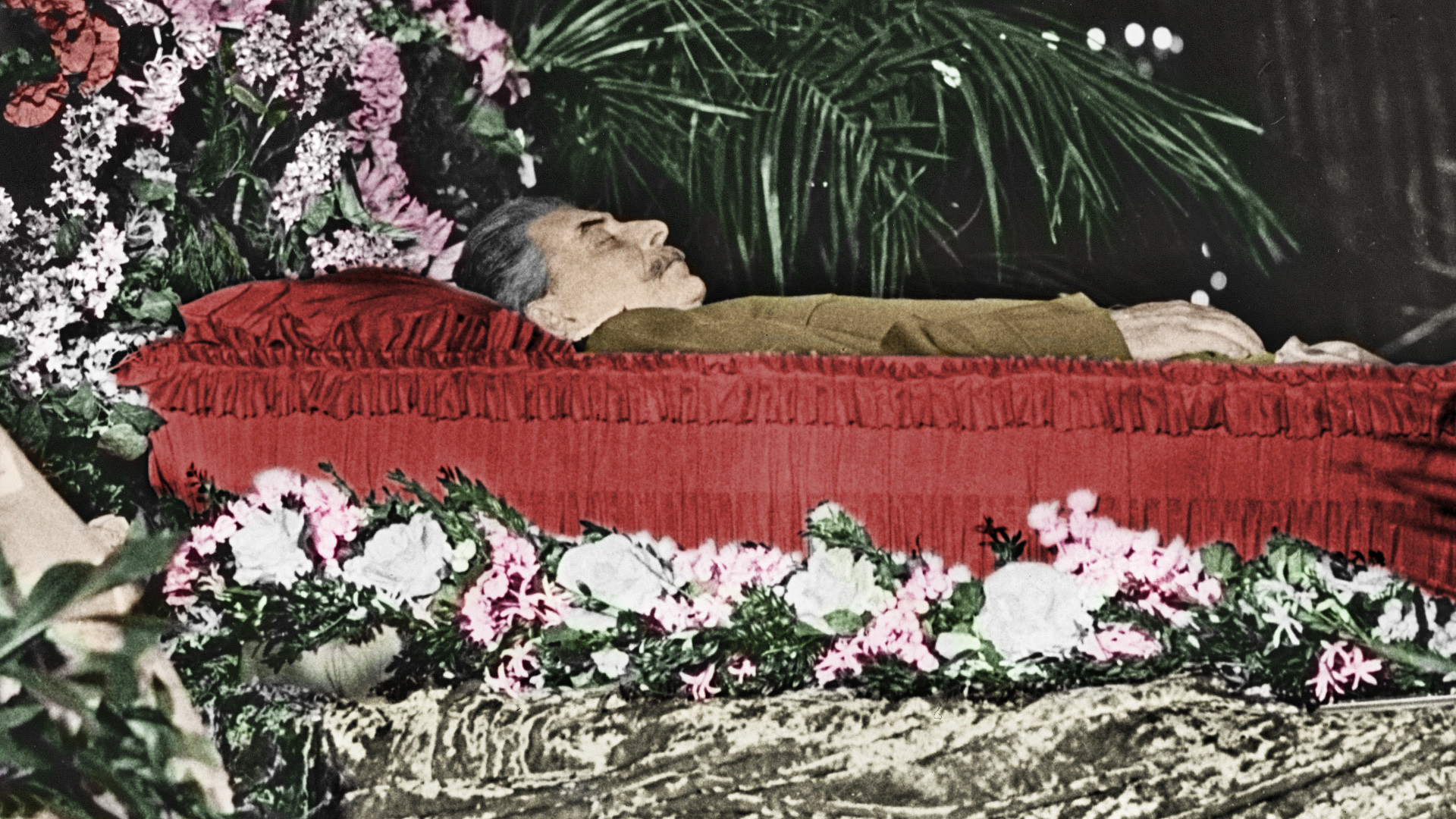 On March 5, 1953, the "Father of Nations" Joseph Stalin passed away. On this day, schoolchildren were let out of school early, and many adults were excused from work. According to contemporary accounts, however, surviving victims of the purges and Gulag prisoners cracked open the champagne on hearing the news. 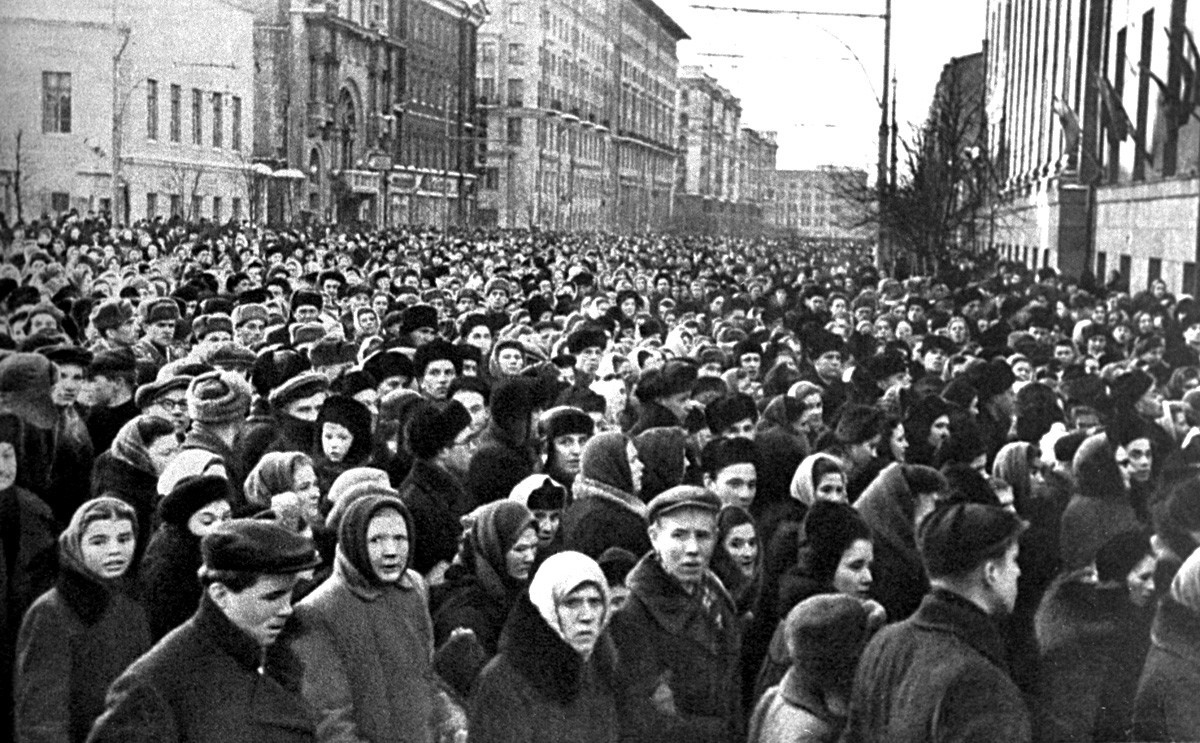 The farewell ceremony in the Pillar Hall of the House of Unions lasted for three consecutive days and nights. The day of the funeral, March 9, ended in tragedy for Muscovites. Around 12,000 people came to Red Square alone to say goodbye to the leader, and thousands more flocked to the center from all regions of the city. With some streets blocked, the swelling crowds had nowhere to disperse. A stampede ensued, in which about 400 people perished (the exact figure remains classified to this day). 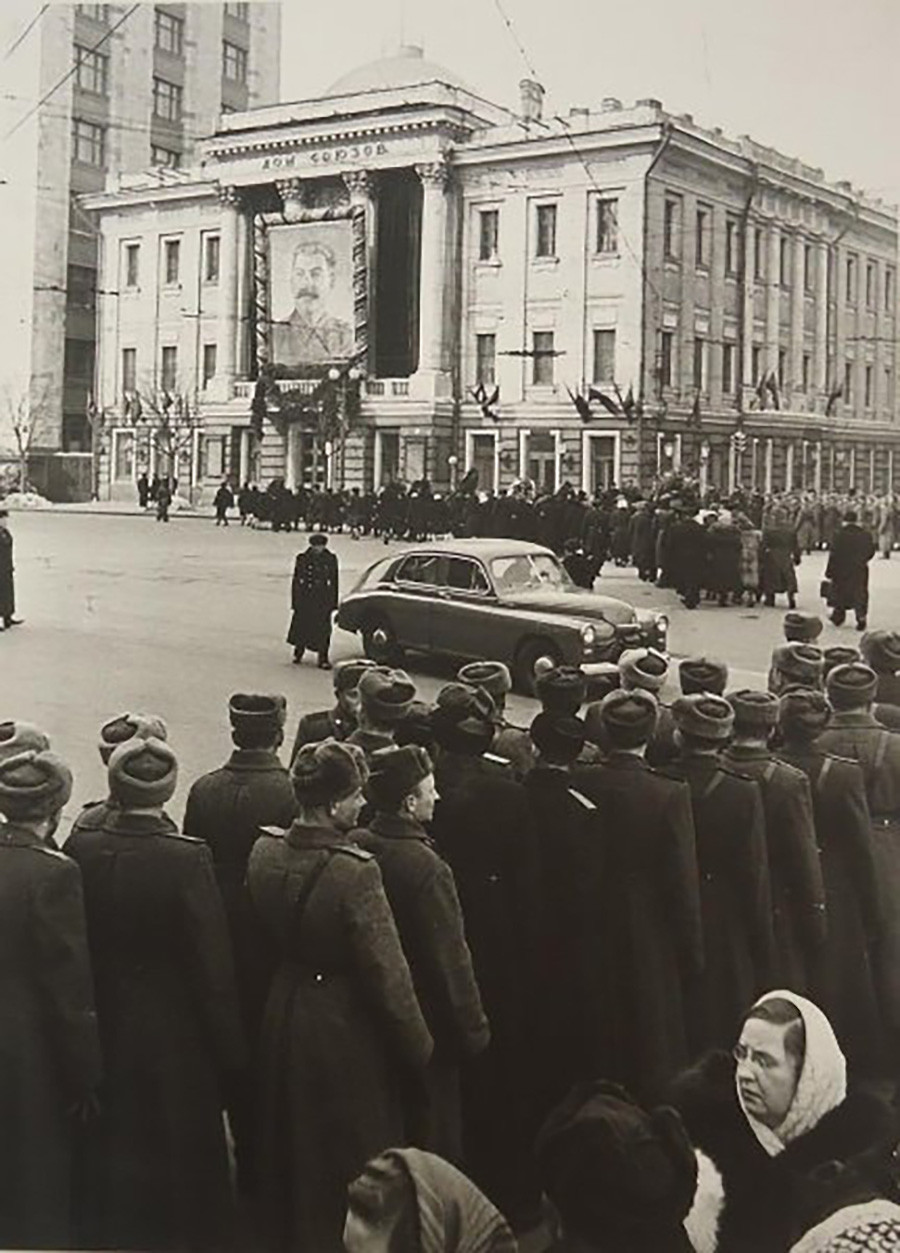 To begin with, Stalin's body was placed in a coffin in the Mausoleum next to Lenin, but in the 1960s, following Krushchev’s debunking of Stalin’s cult of personality, he was reburied beside the Kremlin wall. 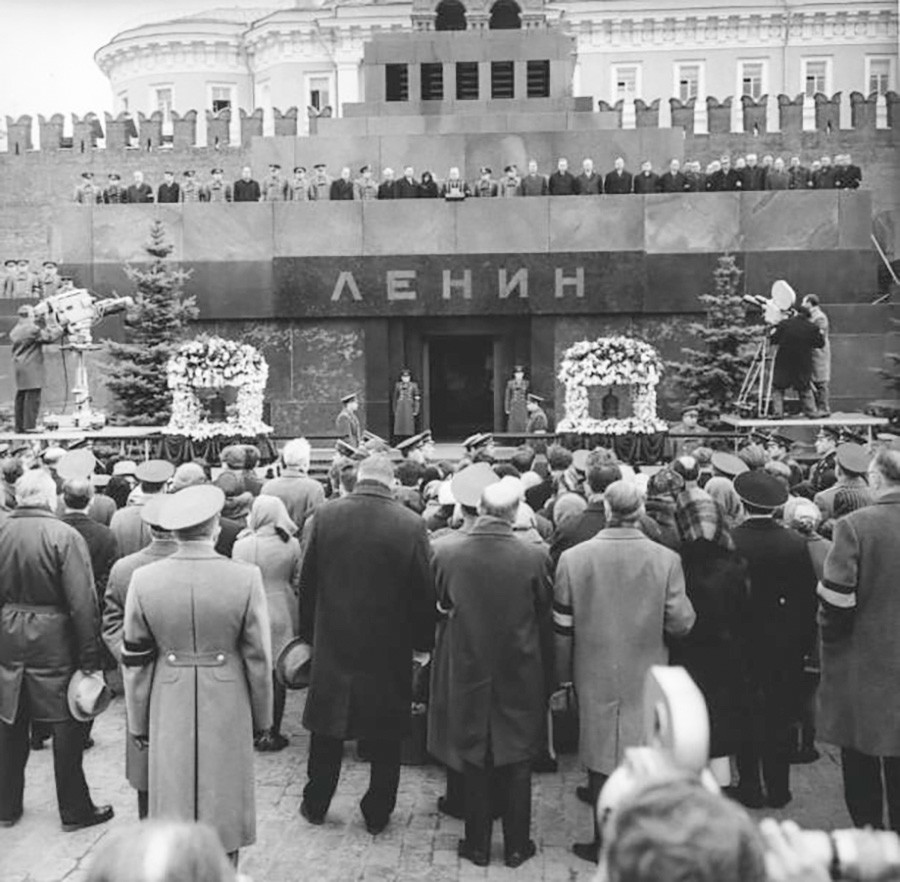 The first human in space returned from his historic flight a national and global hero. And it was as a hero that he seen off on his final journey. He died in a plane crash on March 27, 1968, during a training flight, together with his instructor, Vladimir Seregin. The farewell ceremony took place in the Central House of the Soviet Army, and there was a public mourning on Red Square. The urns of Gagarin and Seregin were buried beside the Kremlin wall. 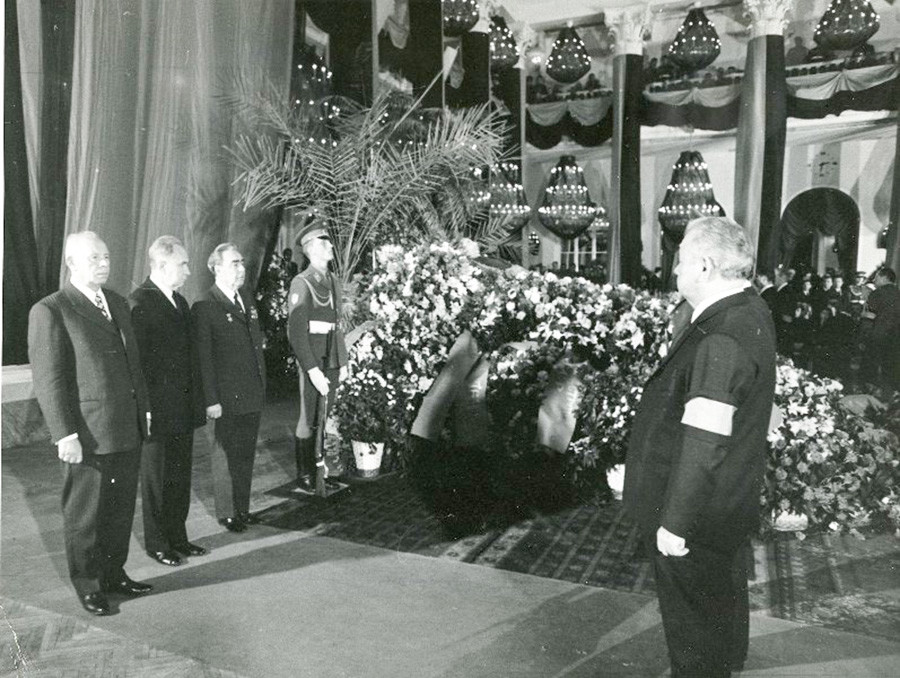 The legendary Soviet commander, who rose to fame during the Civil War and displayed remarkable tactical nous in World War II, was one of the USSR's first marshals. 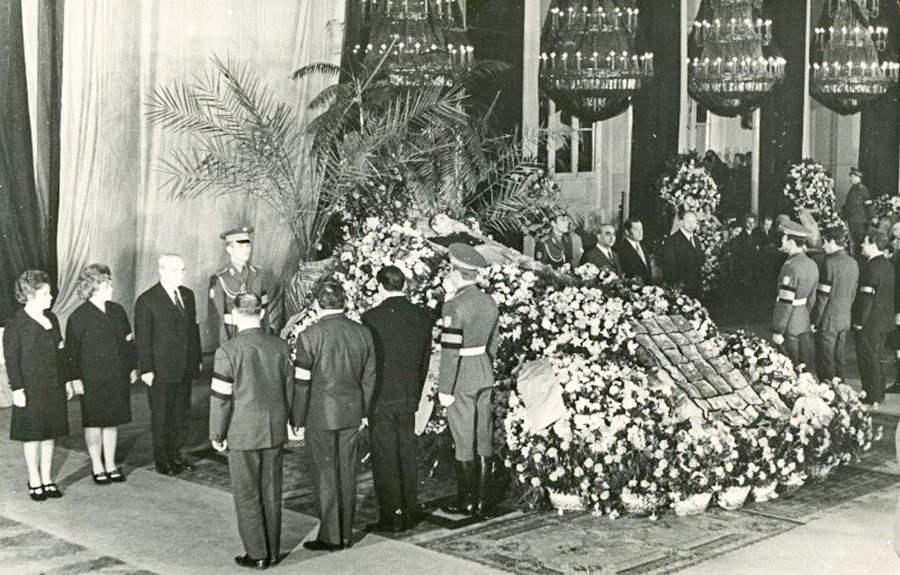 His funeral was televised nationwide on Oct. 30, 1973. The 91-year-old marshal was buried in the necropolis by the Kremlin wall. 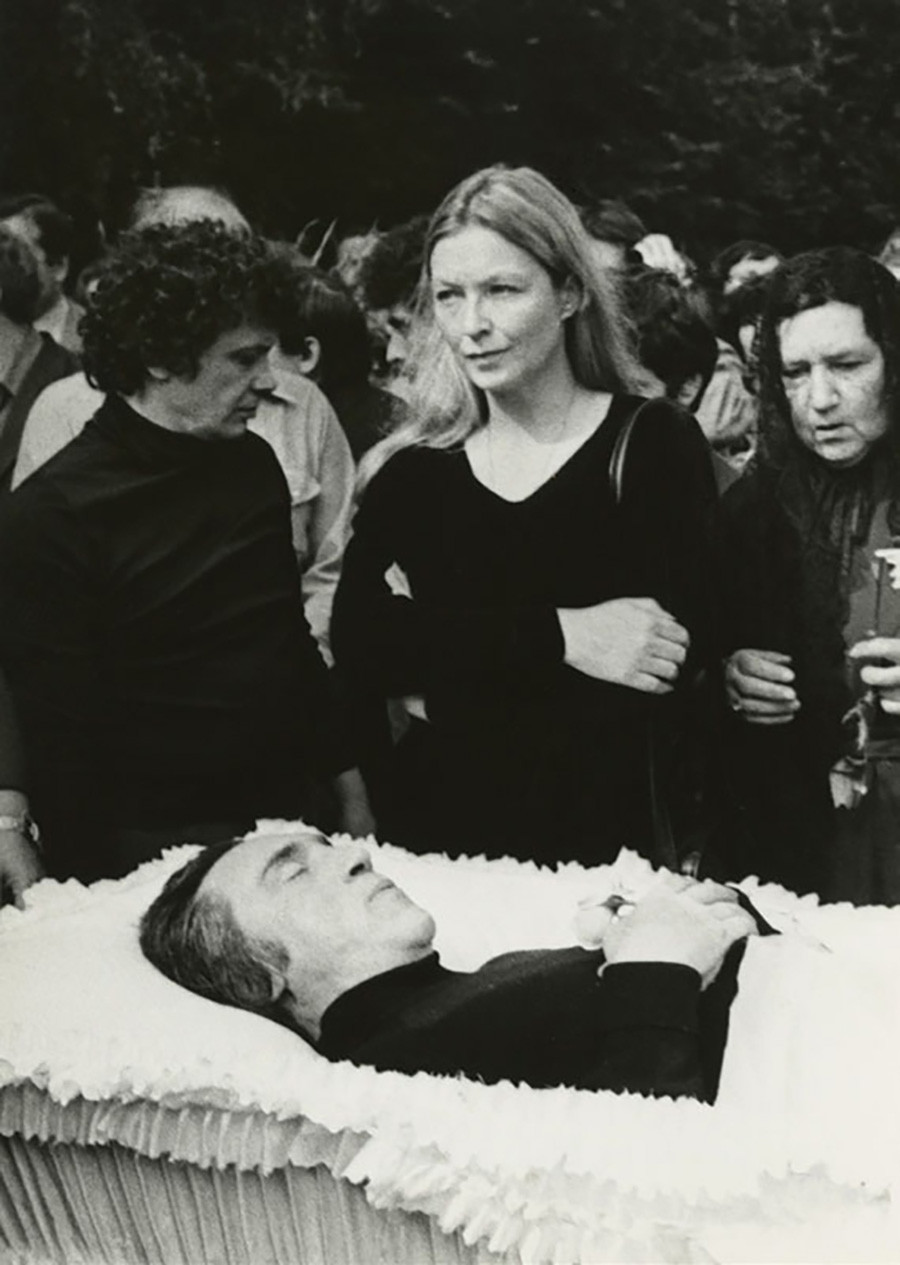 The 42-year-old poet, actor and singer-songwriter Vladimir Vysotsky died of a heart attack on July 25, 1980. The cause of death is believed to have been alcohol and drug abuse. His passing was a tragedy for his millions of fans. 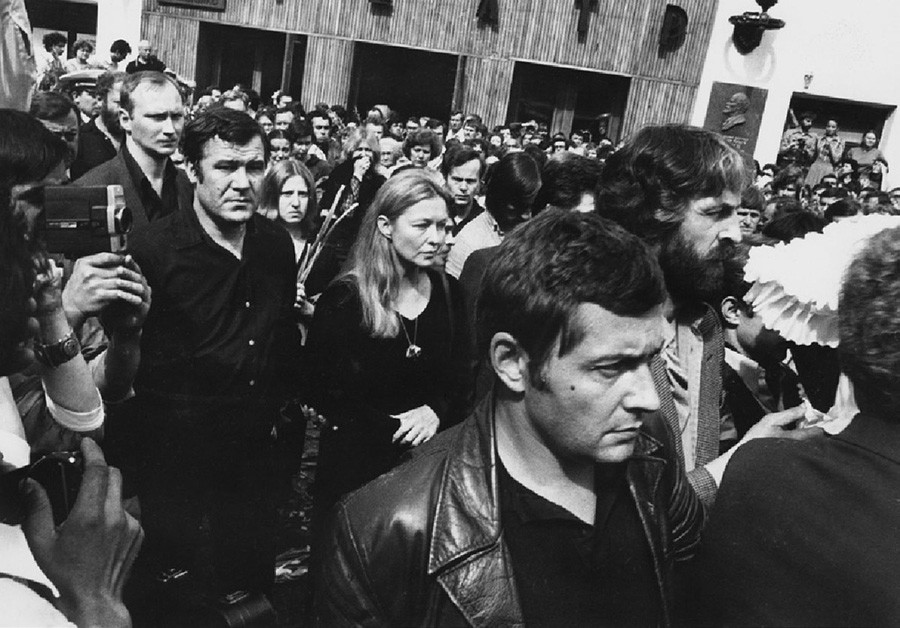 The farewell ceremony was held at the Taganka Theater, where the actor had captivated audiences for many years. The line outside stretched for several kilometers, and more than 100,000 people gathered on Taganskaya Square itself in central Moscow. 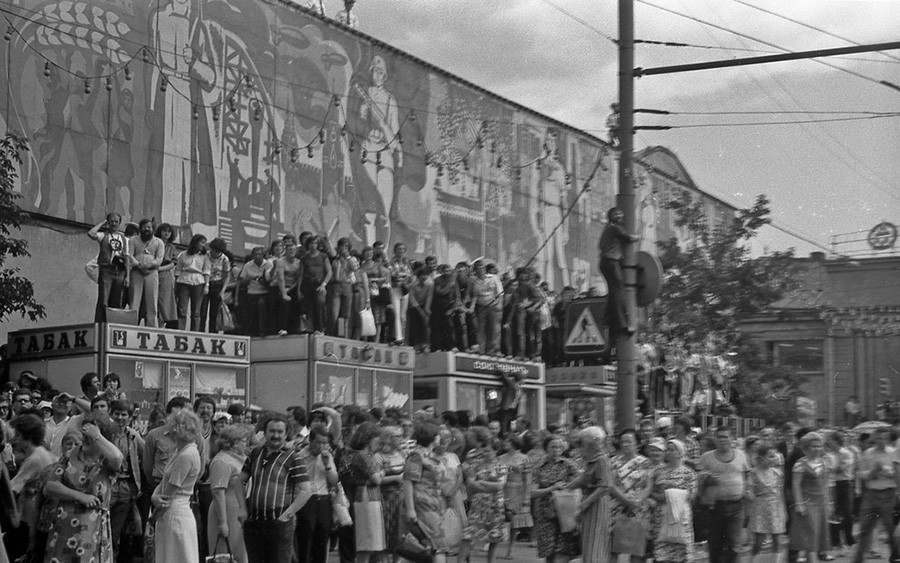 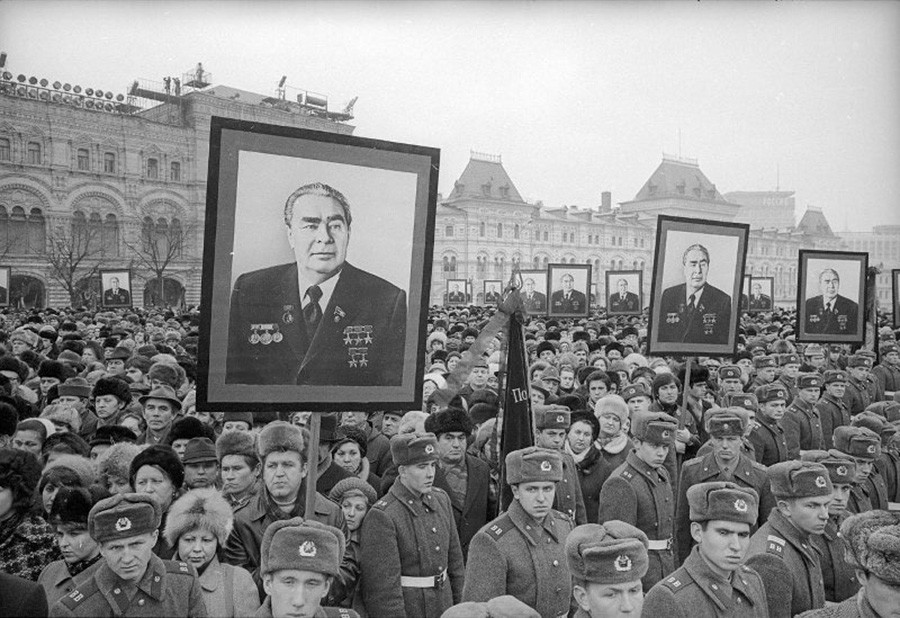 After 16 years at the helm of the Soviet Union, Brezhnev too was buried with full military honors. He died in his sleep on Nov. 10, 1982, from a blood clot. 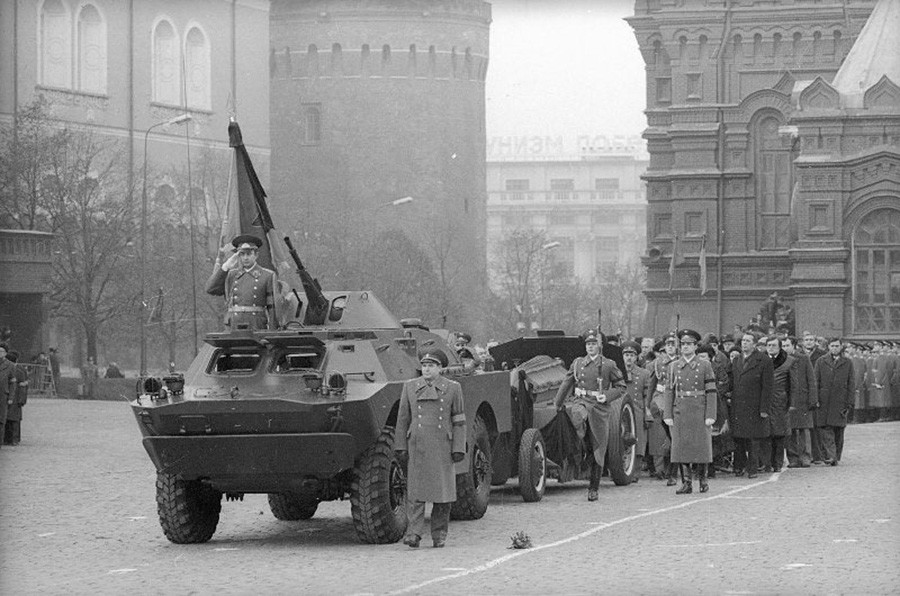 The funeral procession was perhaps the most pompous since Stalin’s time. It was attended by numerous foreign leaders. Brezhnev’s final resting place is beside the Kremlin wall. 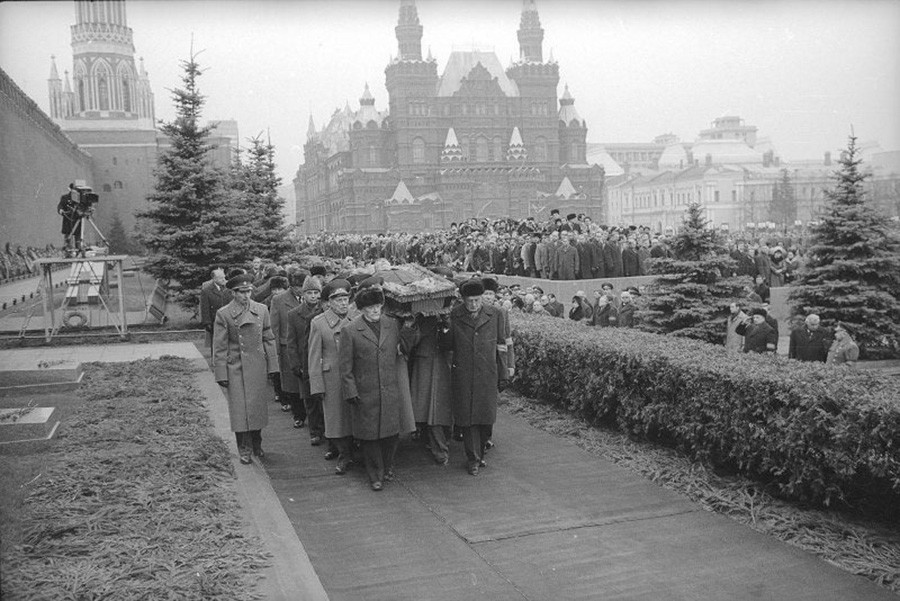 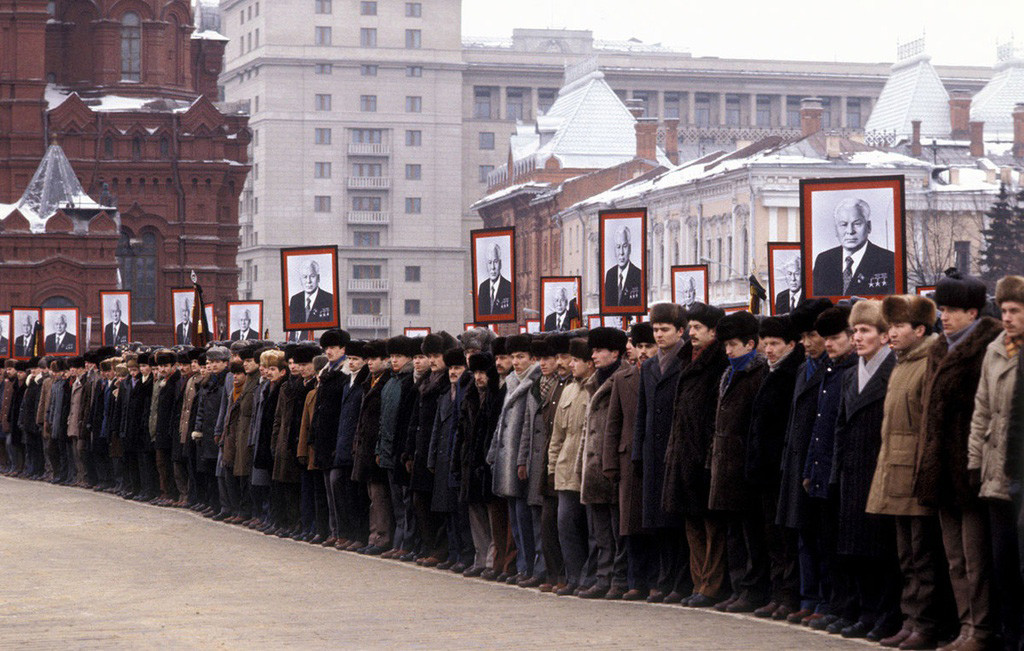 Chernenko led the USSR for just a little over a year before passing away on March 10, 1985. But his short term in office did not diminish the scale of his funeral. Even Margaret Thatcher was there in person. 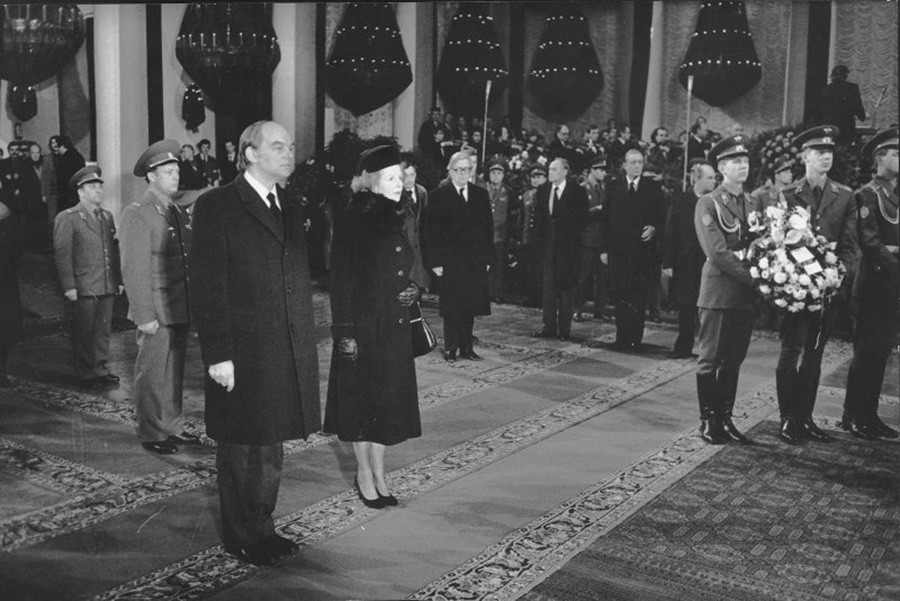 Even in life Tsoi was a cult figure and the idol of his generation, so his death in a car crash on Aug. 15, 1990, came as a real shock. The country's top rock star, the voice of perestroika, who demanded change, quite literally, in his famous anthem Khochu peremen (I Want Changes), was just 28 years old. Eyewitnesses say that pandemonium broke loose in Leningrad (St. Petersburg), his hometown: people from all across the city flocked to the building of the rock club where Tsoi’s group Kino had been regulars. A tape recording of the band’s songs played there non-stop for several days, and thousands of mourners came to Bogoslovskoe Cemetery in Leningrad to bid their hero farewell.