How Russia annexed the Far East 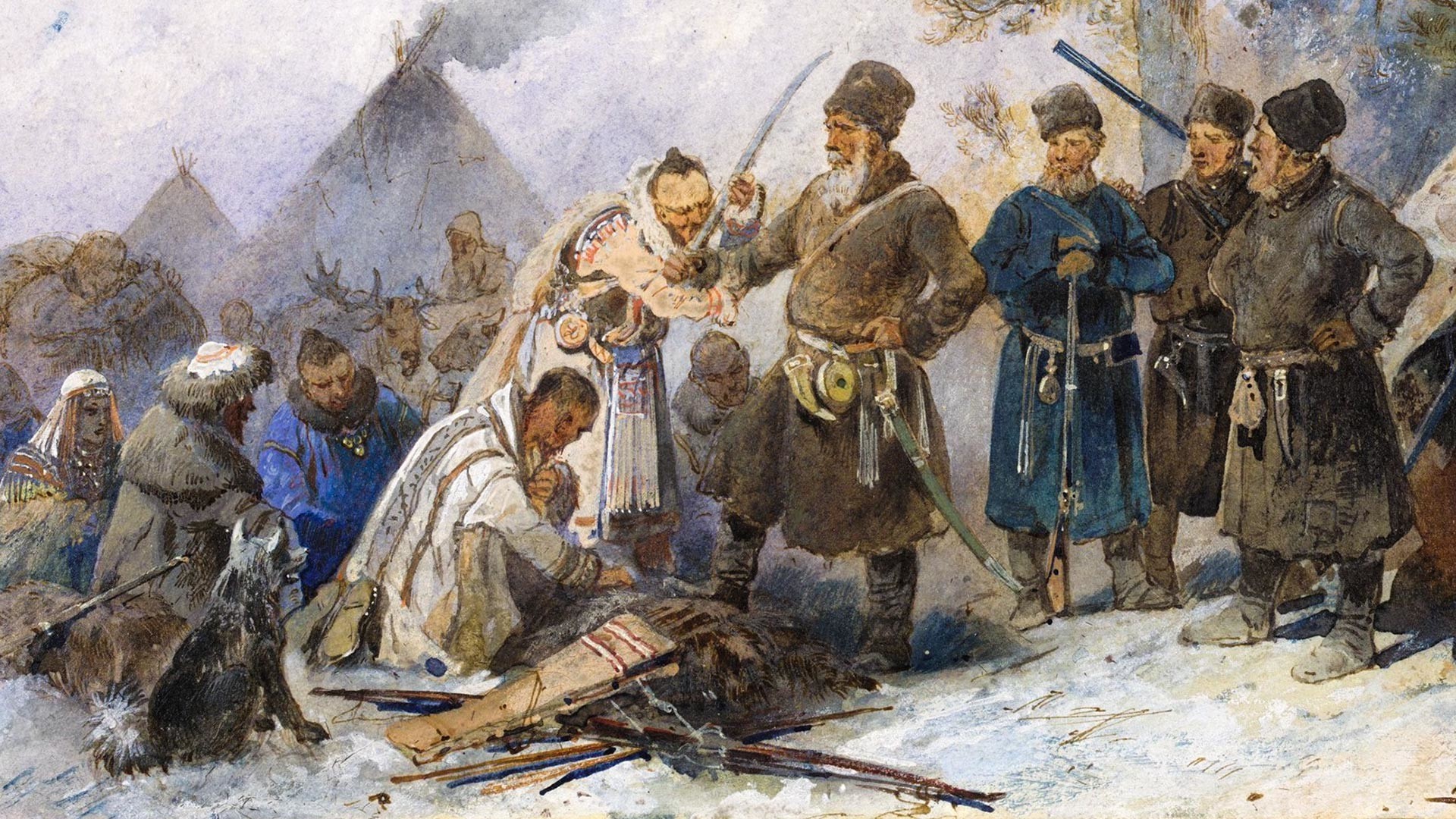 Nikolay Karazin
If the Russians had dallied a little longer, the region could well have become an American, French or British colony.

Back in the 1630s, the Russian state, already in control of much of Siberia, began the exploration and conquest of the northern Far East. Cossack detachments advanced to the Pacific coast, establishing forts and strongholds along the way, placing the local tribes under the “hand of the High Sovereign” and imposing a fur tax, known as yasak. 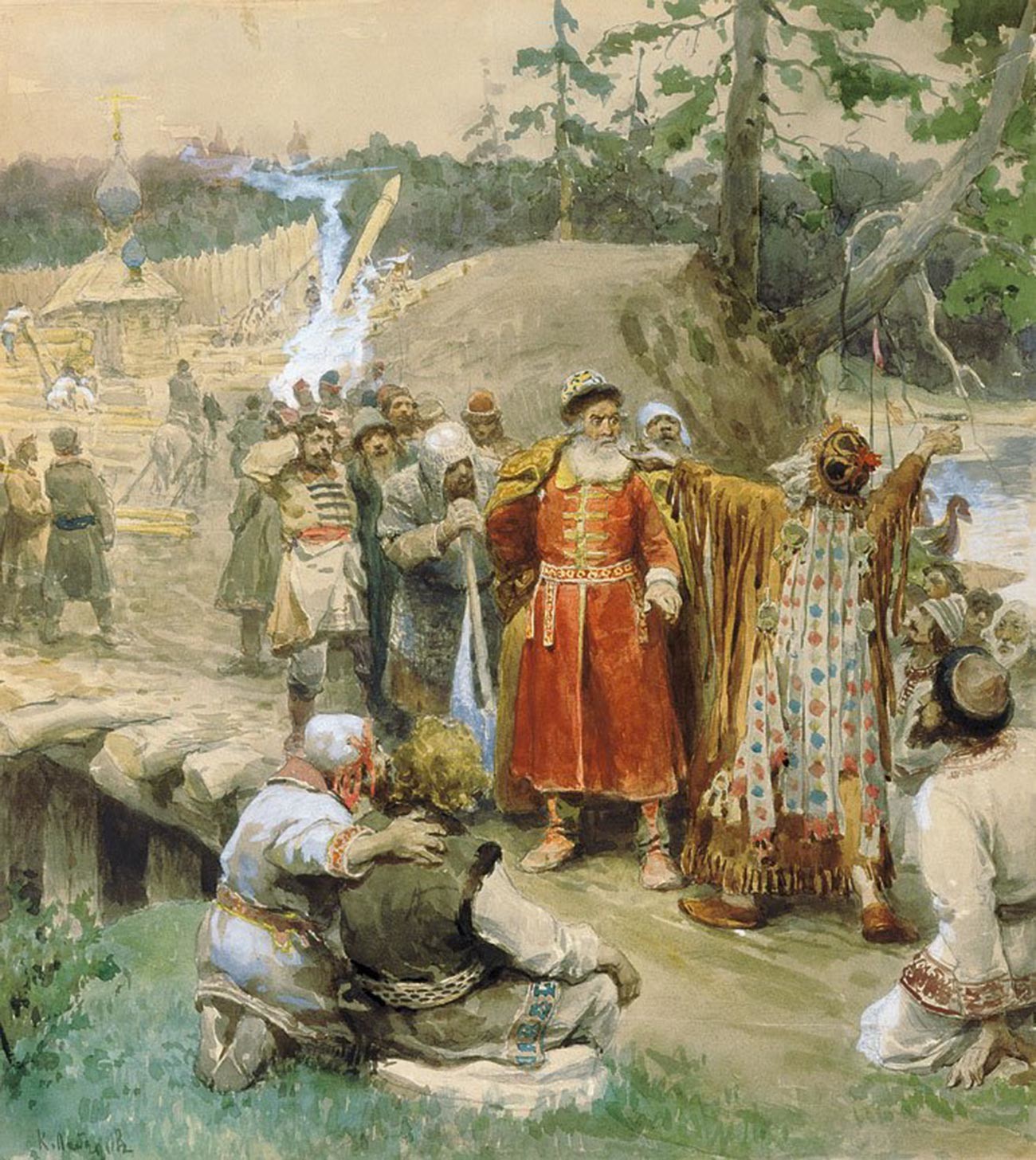 "The Development of New Lands."

The establishment of tsarist power was not always peaceful, far from it. There was fierce resistance to the new order, in particular, from the inhabitants of the Chukotka Peninsula. It culminated in both sides fielding over a thousand soldiers in pitched battles. An unflattering image of the Russian has taken root in Chukchi folklore: “Clothes like iron, walrus-like mustache, round iron eyes, elbow-length spears, warmongering, eager to fight.” 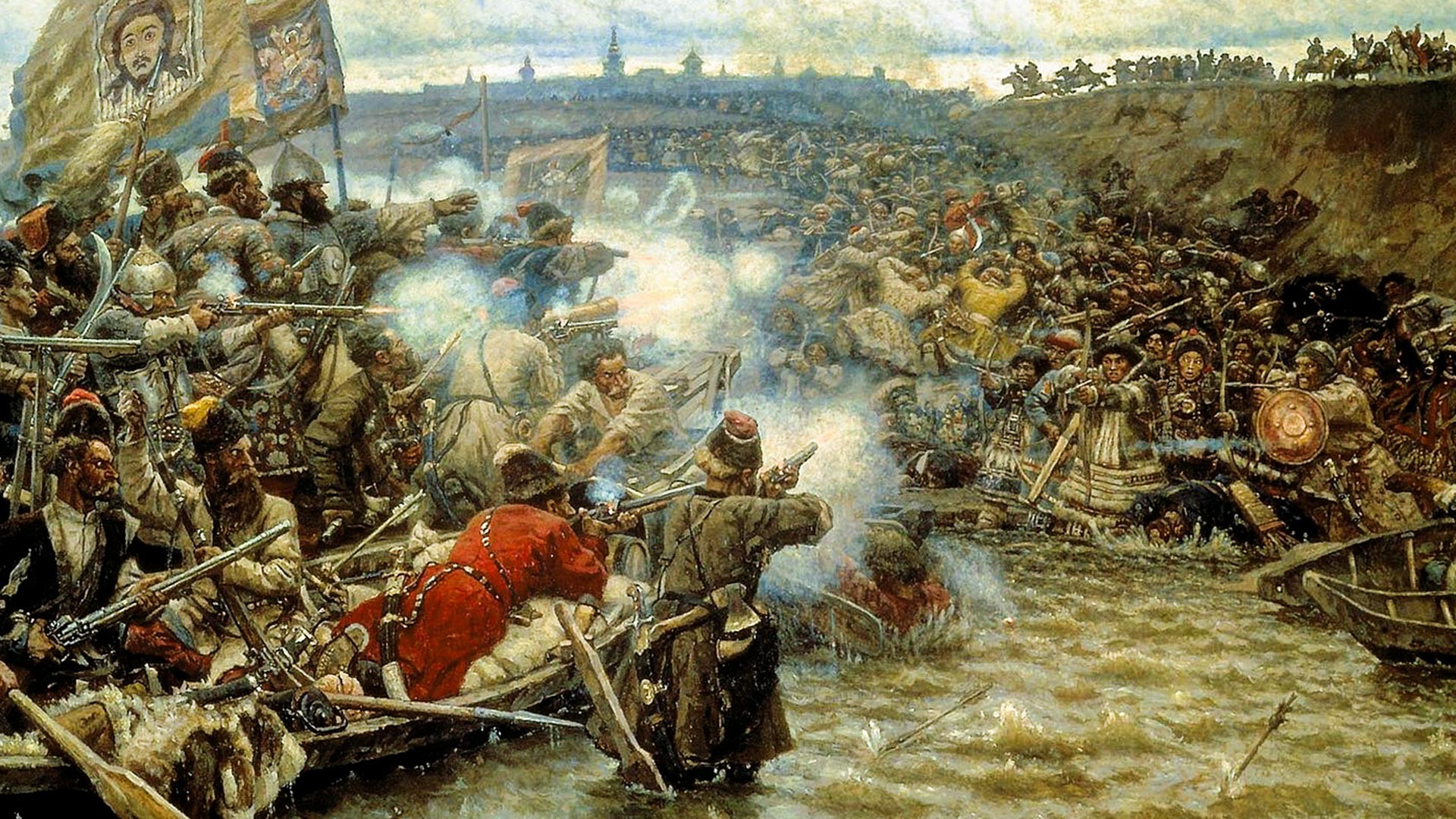 "The Conquest of Siberia by Yermak Timofeyevich."

The Chukchi managed to inflict several stinging blows on the Russian troops. For instance, in the Battle of Yegach in 1730, the Cossack colonel Afanasy Shestakov perished, and in the Battle of Orlova in 1747, the detachment of Major Dmitry Pavlutsky was routed and the commander himself killed. Empress Catherine II eventually overcame the problem by promising the intransigent defenders a large share of independence in internal affairs in exchange for their obedience. 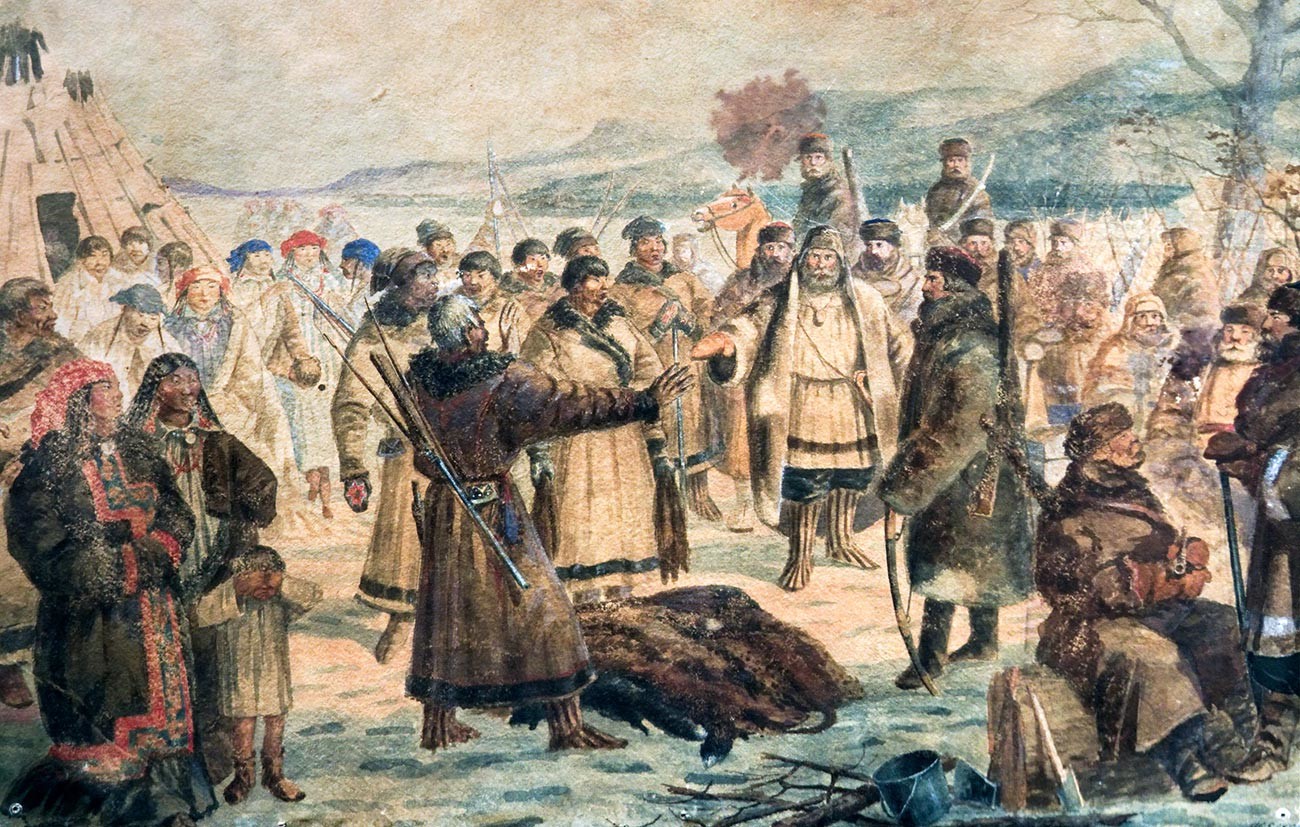 Despite the resistance of the Chukchi, as well as periodic uprisings by the Koryaks on the Kamchatka Peninsula, the Russians continued their advance into the northern regions of the Far East. So much so, in fact, that by the late 18th century they were beginning to colonize Alaska. The situation was more complicated in the south. There, in the Amur River basin, Russia faced opposition from the powerful Qing Empire of China. 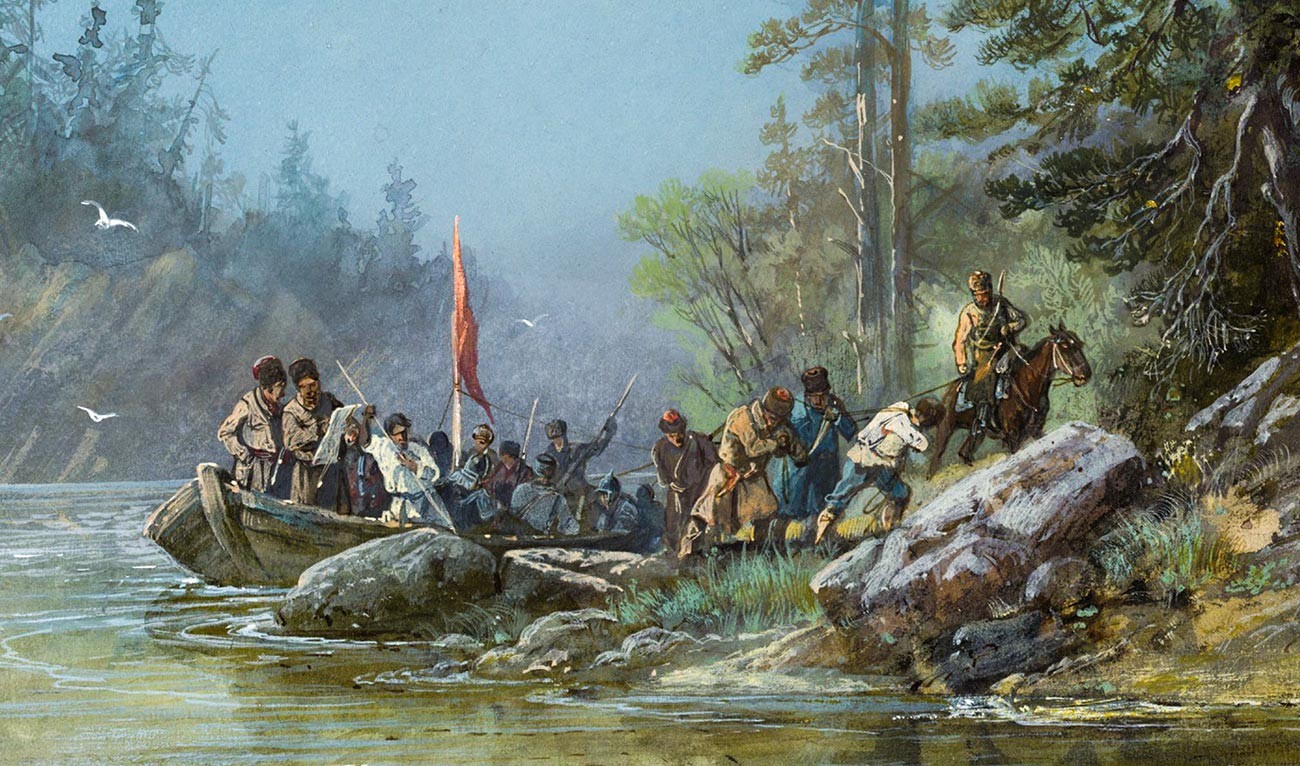 The arrival of "distant barbarians" in the lands of the Daurs, a Mongol people who paid tribute to Beijing, was regarded as a gross invasion of China’s sphere of influence. In 1685, the Russian fort of Albazin on the Amur River was besieged by a 5,000-strong Qing army. Despite the tenfold superior manpower of the enemy, the Russian garrison held out. Only when it became clear that backup would not be arriving did the defenders agree to an honorable surrender. 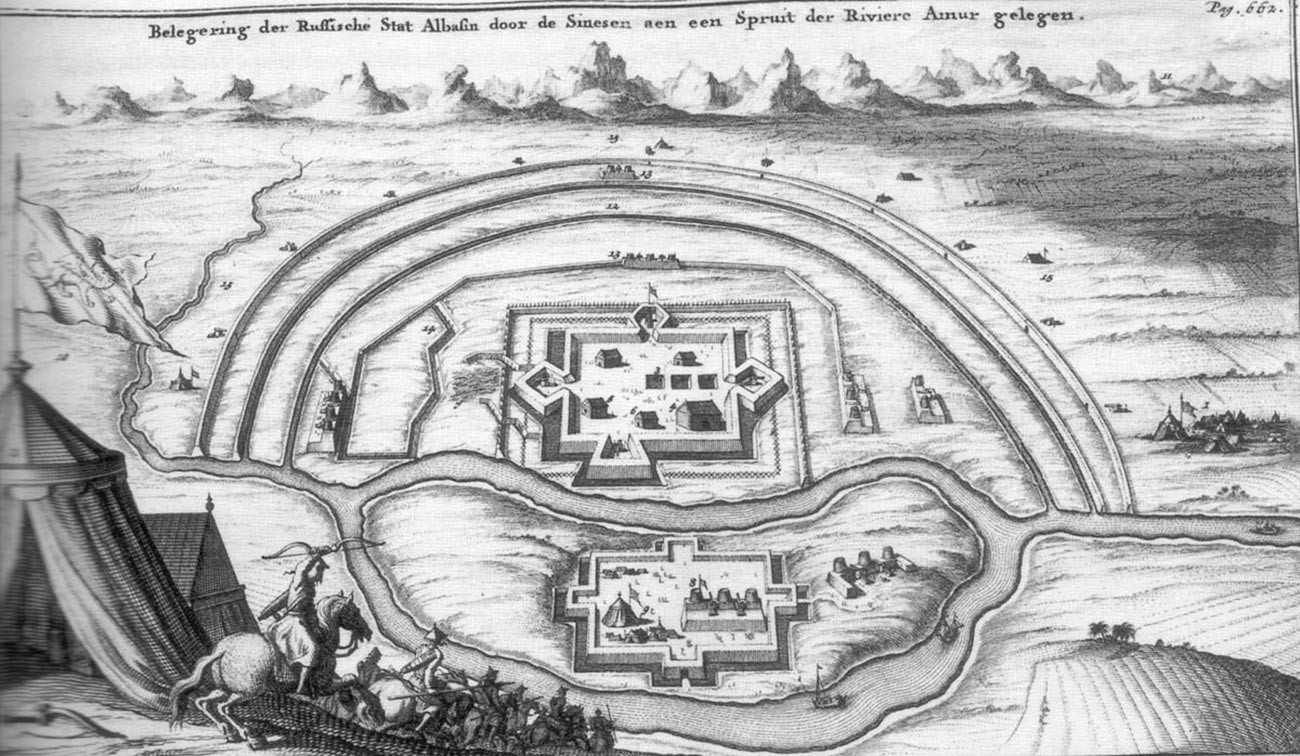 The Chinese under the Qing (also known as the Manchu, the last imperial dynasty of China, ruling from 1644 to 1912) tore down the fortifications, but after they left Albazin was reoccupied by Russian troops. The Qing army laid siege to the prison for a second time, but its furious assaults came to naught. Nevertheless, the violent confrontation with China depleted the already overstretched resources of the Russian state in the Far East. In 1689, the parties signed the Treaty of Nerchinsk, by which the Russians ceded the Albazin fortress and some of their acquired territories to the Qing Empire, thereby stopping the Russian advance toward the Pacific Ocean along the Amur River. 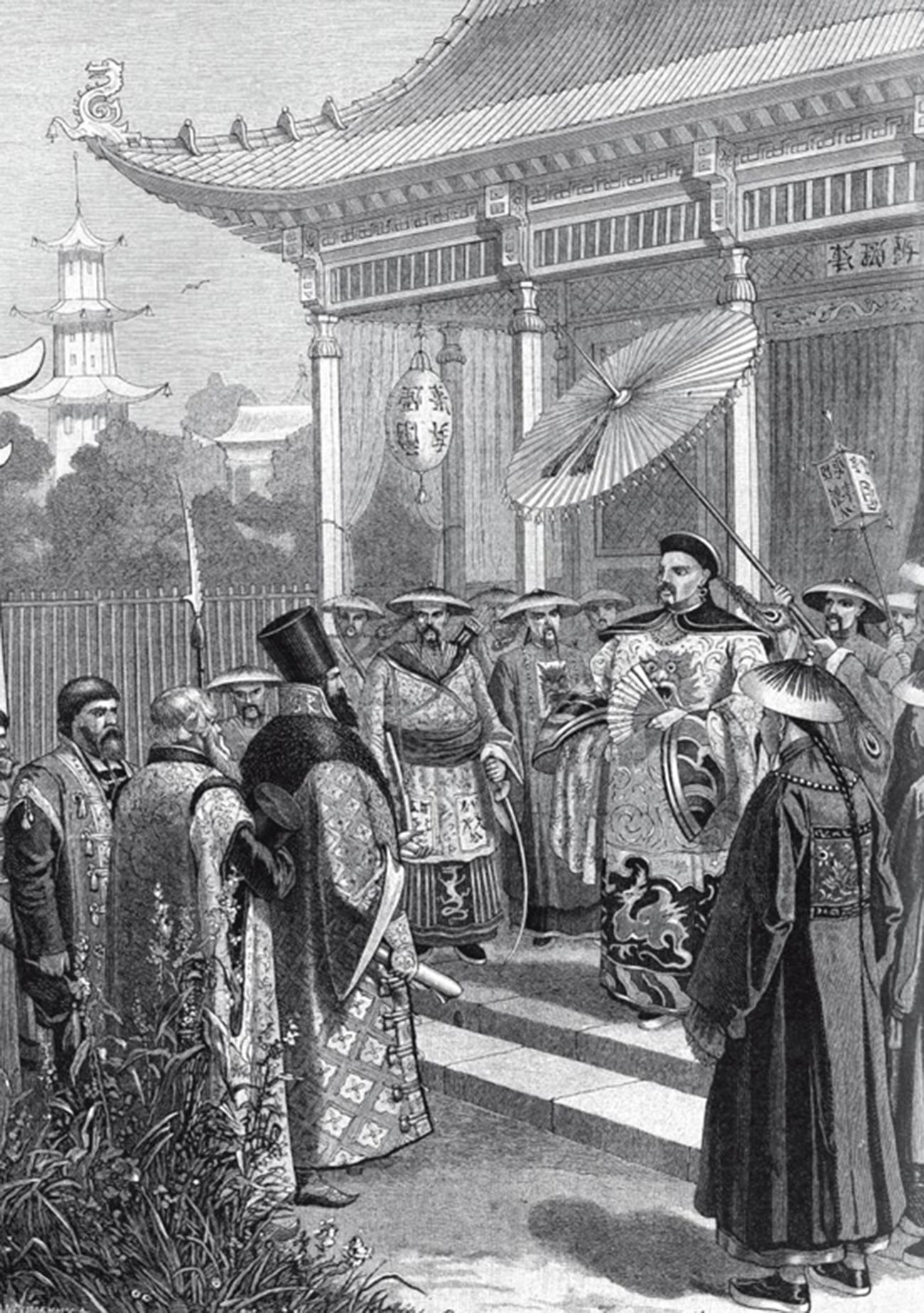 Russian envoys in China in the 17th century.

For almost a century and a half thereafter, the Russians lost interest in the Amur region. On the one hand, St. Petersburg was convinced that the Chinese had a firm grip on the region (in fact, the Qing Empire did nothing to colonize it). On the other, the Russians were under the false impression that the mouth of the Amur was unsuitable for navigation, and that Sakhalin was a peninsula, which would create additional navigational difficulties. 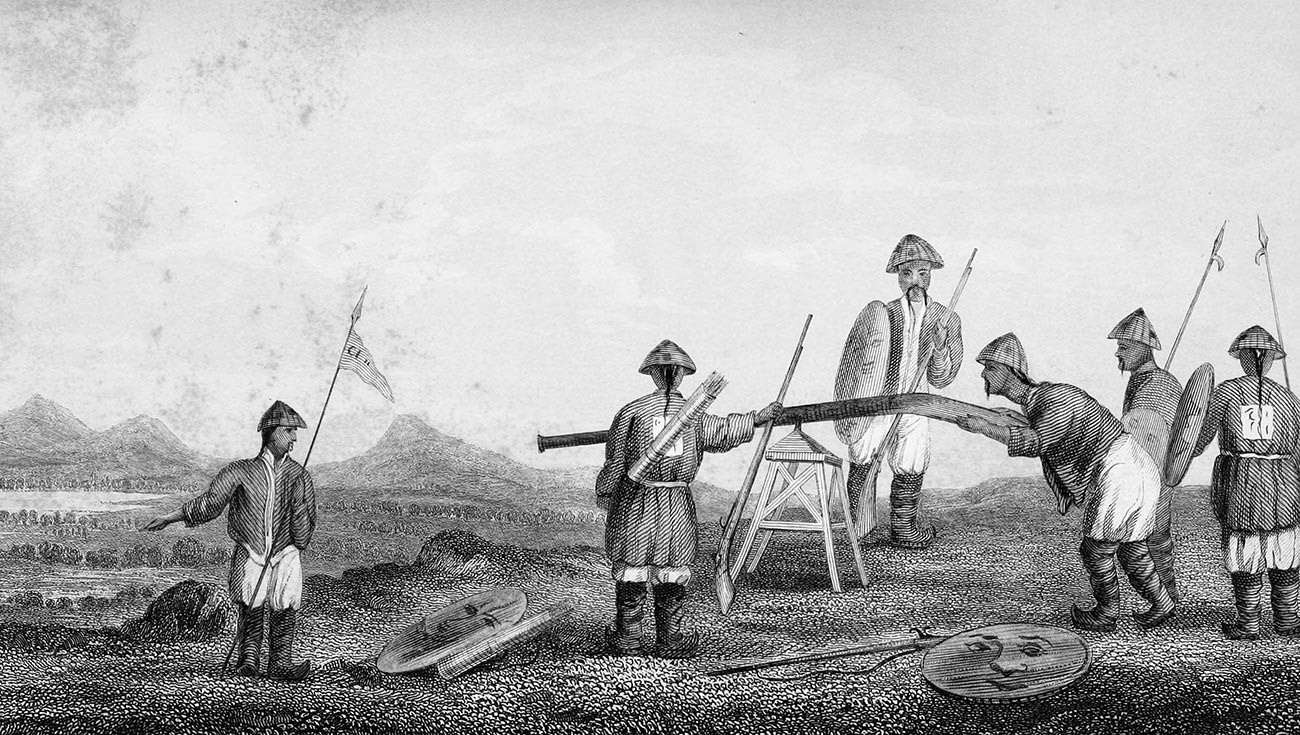 The emergence of new players forced Russia to activate its forces in the Far East. British, French and American ships were becoming an increasingly common sight in the Sea of ​​Okhotsk. “In the 1820–30s, year after year, whole squadrons of foreign whalers began appearing in ever-increasing numbers off the deserted Russian shores and often attacked and plundered the coastal settlements... Russia faced, if not the complete loss of the region, then a significant increase in the damage caused by foreign seafarers to the population and state property on the coast and in the waters of the Pacific,” Admiral Gennady Nevelskoy wrote in his memoirs. 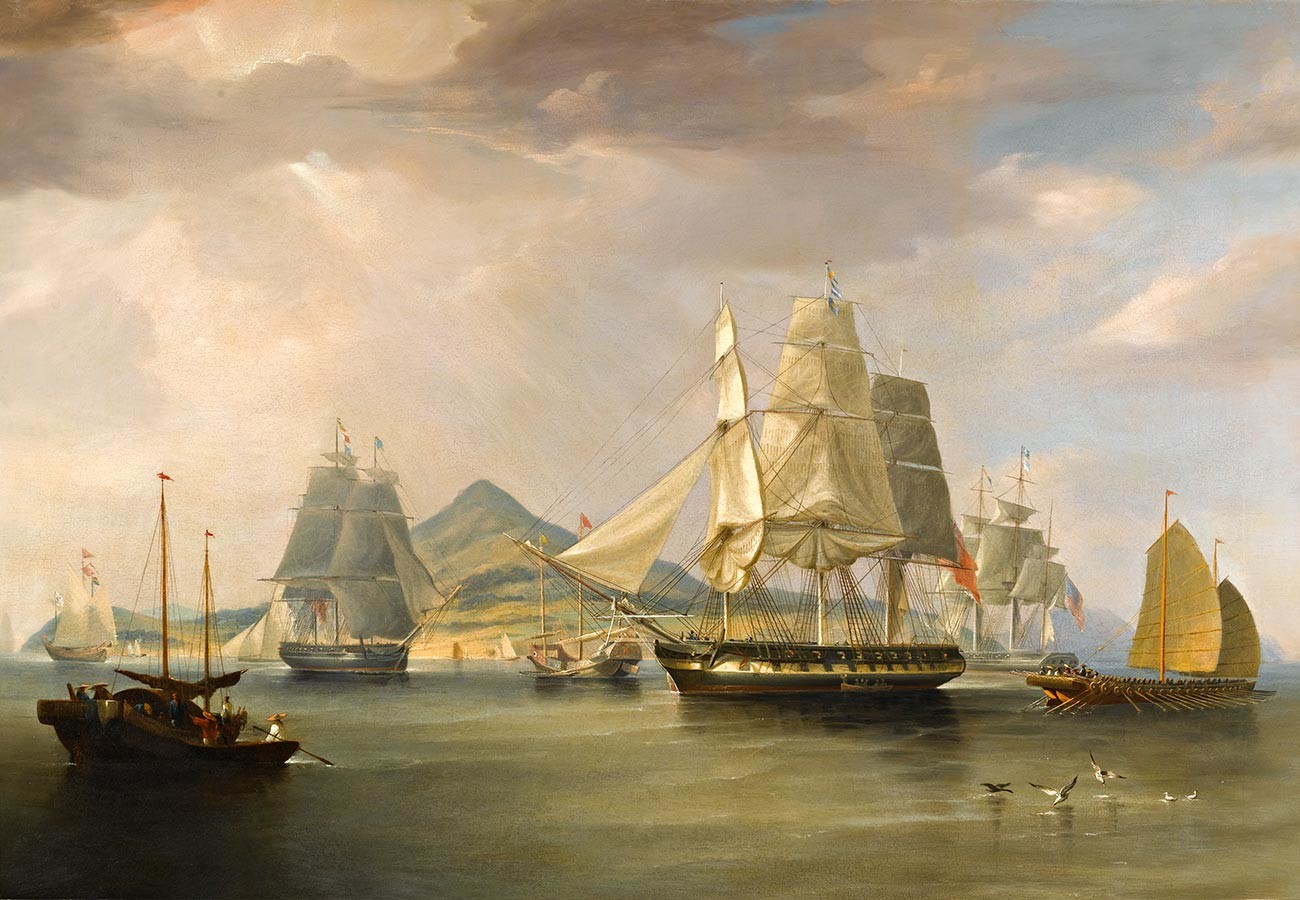 "The Opium Ships at Lintin."

The governor-general of Eastern Siberia, Nikolai Muravyov, understood well the threat the seizure of the Amur region by a European power or the Americans would pose to Russia: “The left bank of the Amur belongs to no one: local Tungusic peoples roam there. If the British find this out, they’ll occupy Sakhalin and the mouth of the Amur. It will happen very suddenly, without warning, which could end in Russia losing all of Siberia, because Siberia belongs to whoever holds the left bank and mouth of the Amur...” 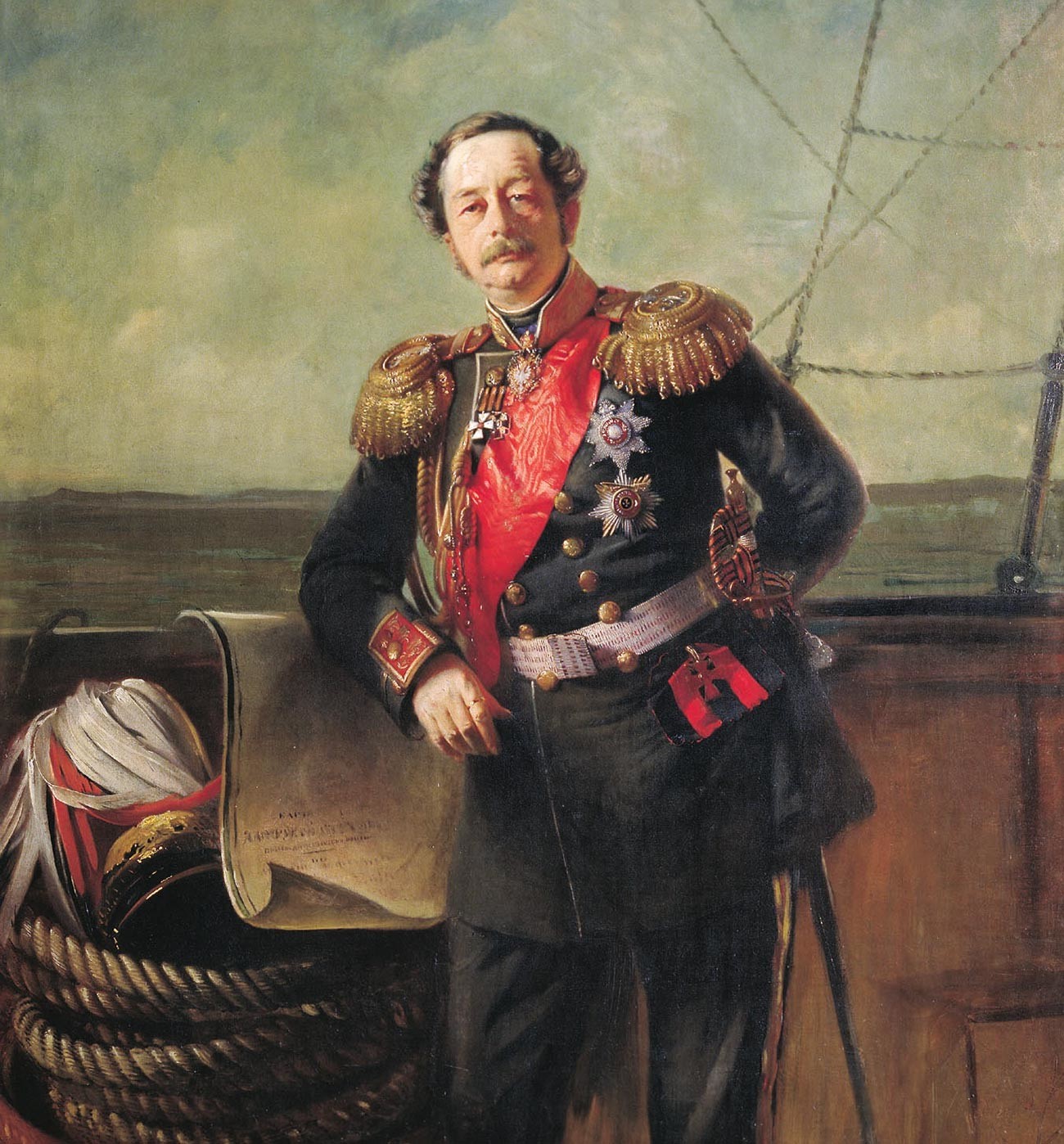 Portrait of the Count Nikolay Muravyov-Amursky.

In 1849 and 1850, Muravyov authorized several expeditions to the Amur region, initially under the command of then Captain Nevelskoy. Having learned that Sakhalin is, in fact, an island, that the mouth of the Amur is perfectly navigable, and that there was no Chinese footprint, Nevelskoy acted boldly and decisively. He founded the Nikolaev post (now the city of Nikolaevsk-on-Amur) at the mouth of the river and handed out leaflets to the local tribes in several languages intended for foreign seafarers, proclaiming that “[because] the entire Amur Territory up to the Korean border with the island of Sakhalin is a Russian possession, no unauthorized orders or insults to the inhabiting peoples shall be tolerated.” 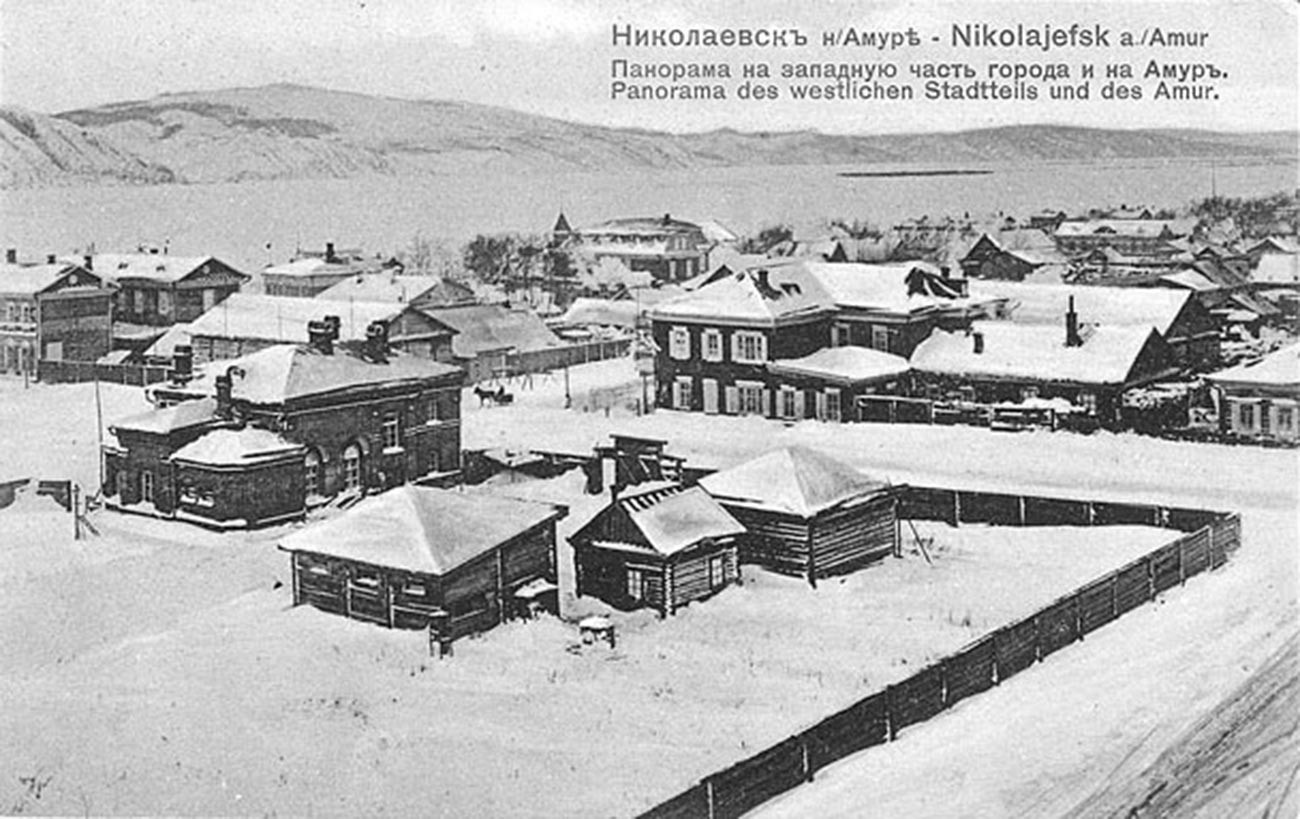 The town of Nikolaevsk-on-Amur in the Russian Far East around the turn of the 20th century.

Still fearful of an angry reaction from Qing China, the Russian government sought to demote Nevelskoy to the rank of sailor for such rashness. But Muravyev interceded on his behalf before Nicholas I. The autocratic tsar eventually pronounced: "Nevelskoy's deed is valiant, noble and patriotic, and where once the Russian flag is raised, it must never be lowered." 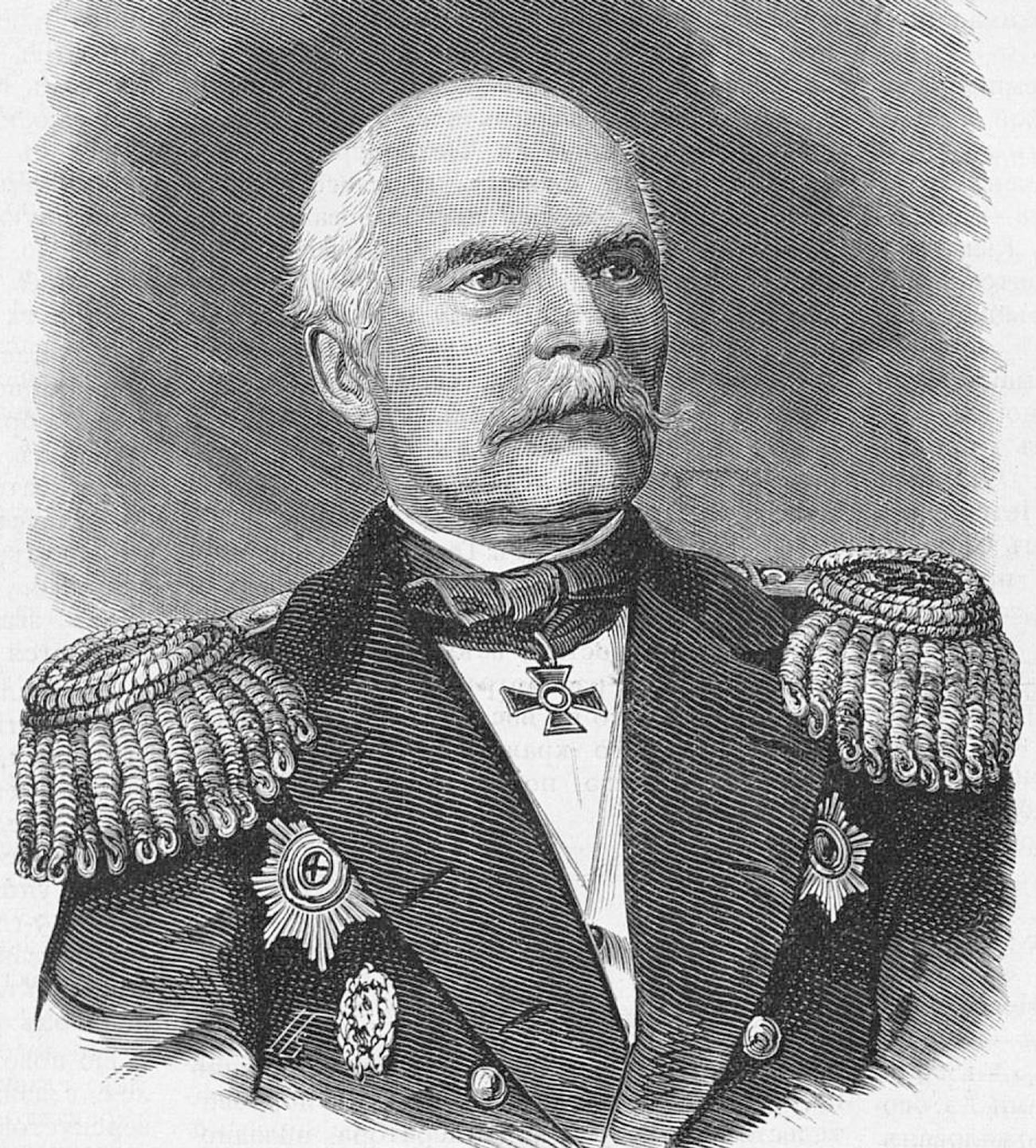 Russia began to steadily build up its military presence in the Amur region. In the end, weakened by the Opium Wars against the Western powers, China was forced to recognize the Amur region and the vast Ussuri territory as part of the Russian Empire. The most important of the series of bilateral agreements that formalized these acquisitions was the 1860 Convention of Beijing. To get the Qing government to acquiesce, the Russian ambassador to the Middle Kingdom, Nikolai Ignatiev, mediated negotiations with France and Britain, whose troops had already entered the Chinese capital, and persuaded them not to lay waste to the city. 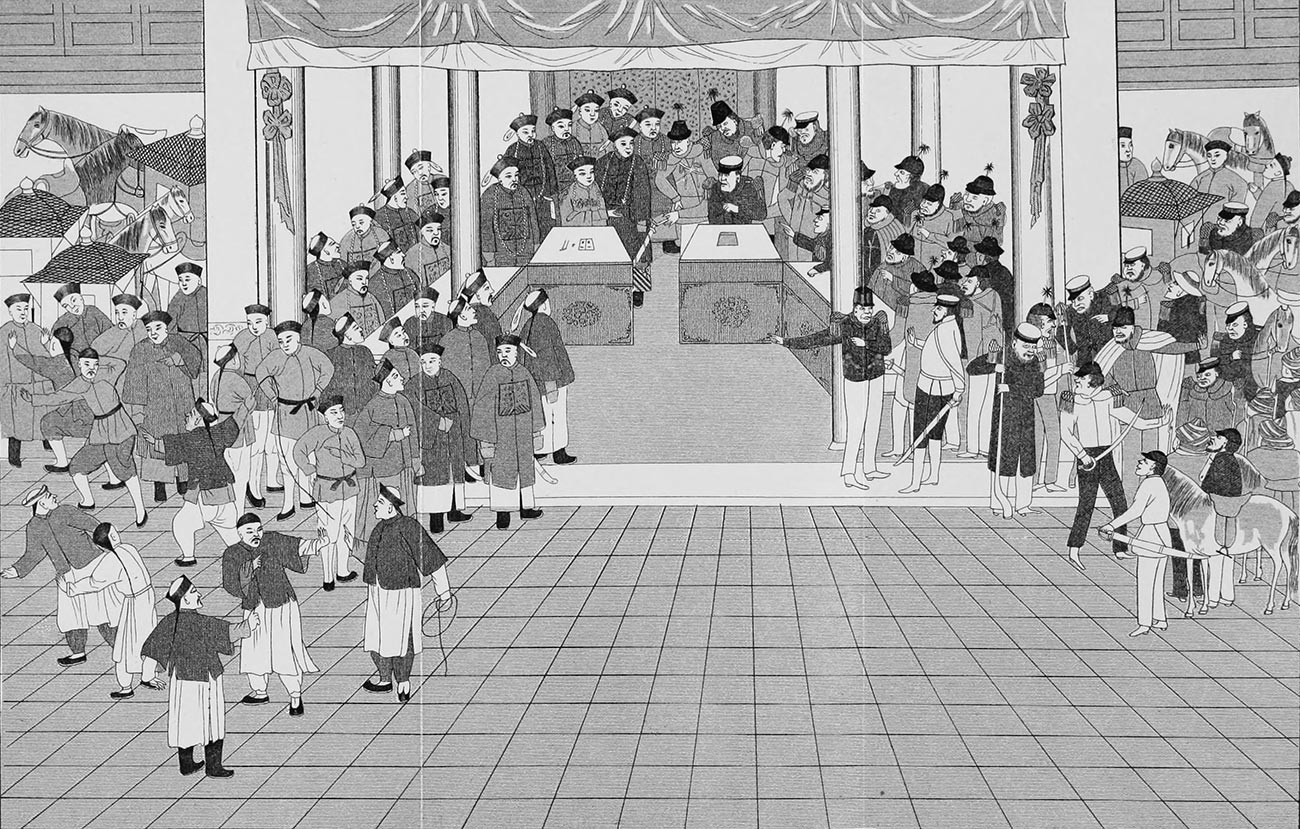 Signing of the Treaty of Peking by Lord Elgin and Prince Kung.

It was then that, in general, the contours of the borders of the Russian Far East were defined, in which it lives with minor changes today. For a long time, only the question of the state ownership of Sakhalin and the Kuril Islands remained unresolved, which finally came under Moscow's rule after the Soviet-Japanese war of 1945. 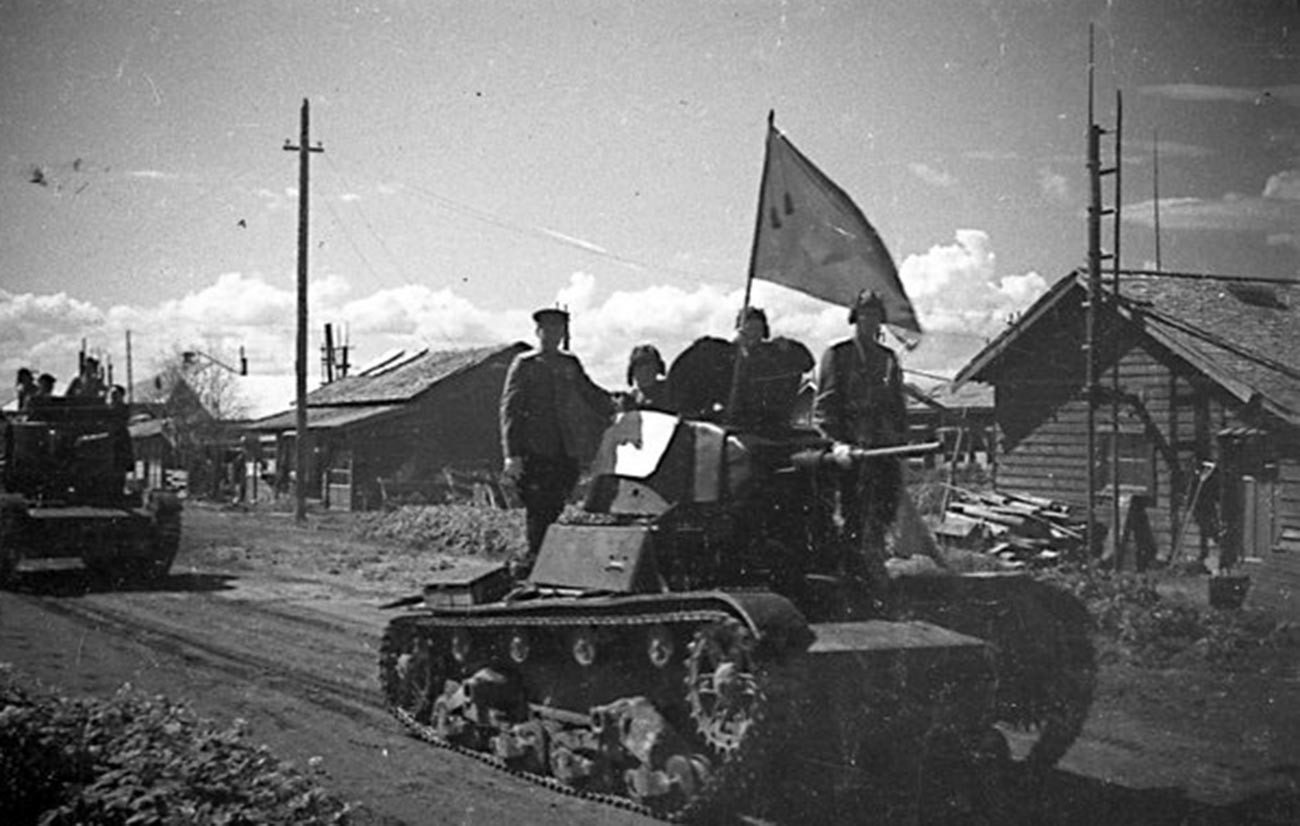