How Siberia was once a separate country 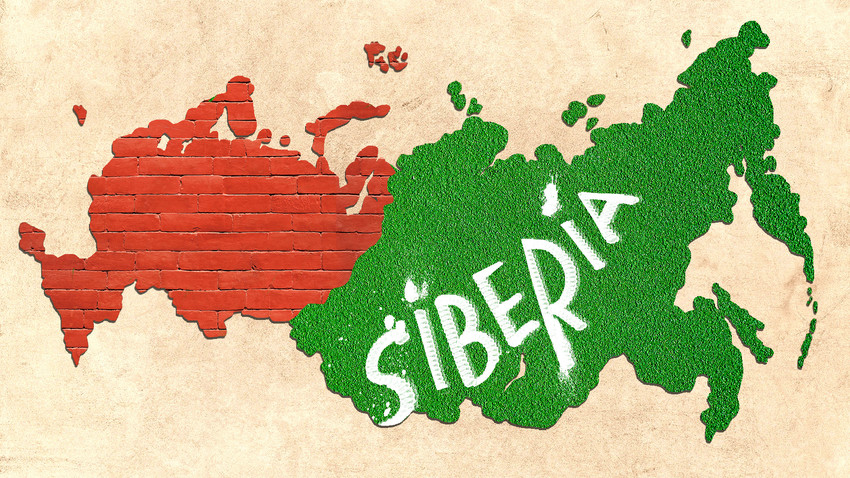 Irina Baranova
The Khanate of Sibir was an ancient Turkic state on the territory of present-day Siberia. It was older than Russia, but in the end, it was absorbed and destroyed…

Siberia is a region in North Asia, separated from Russia's primary territory by the Ural Mountains in the west and bounded by the Pacific Ocean in the east. In the north and south, it is delimited by the Russian state border. Siberia covers an area of over 13 million sq km and accounts for 77 percent of the area of modern Russia. But there was a time when "Siberia" was the name of a separate country. How did it come into being and why did it disappear?

Where does the name "Siberia" come from? 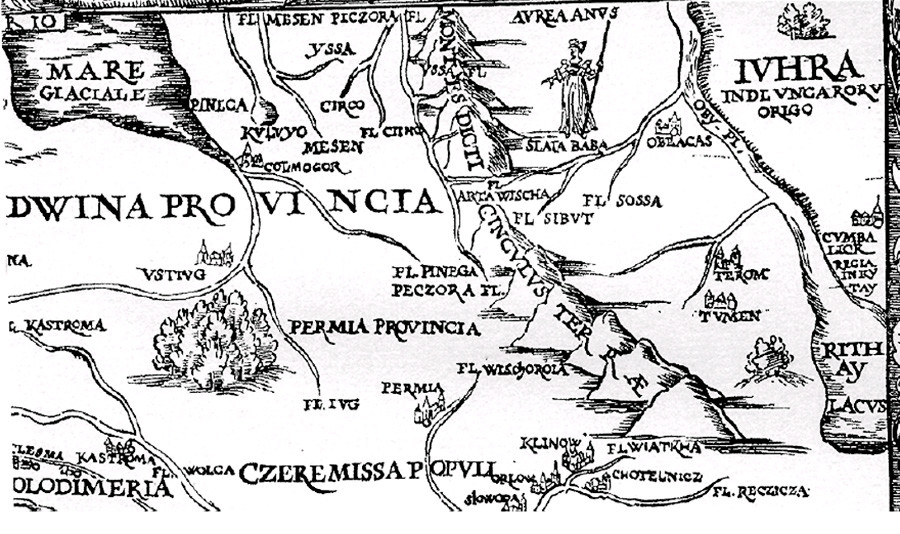 Nobody knows for sure, but there are several theories. In the Turkic languages "Siber/Chiber" means "beautiful", in the Tatar language "seber" means "blizzard" and in the Mongolian language "shibir" translates as "swamp". The name "Siberia" could come from any of these words. In The Secret History of the Mongols – dating from the 1240s, it is the oldest surviving Mongolian text – the word "shibir" is mentioned in connection with a story about the conquest of the lands and peoples living in southern Shibir between the rivers Ob' and Irtysh by Genghis Khan’s son, the military commander Jochi. 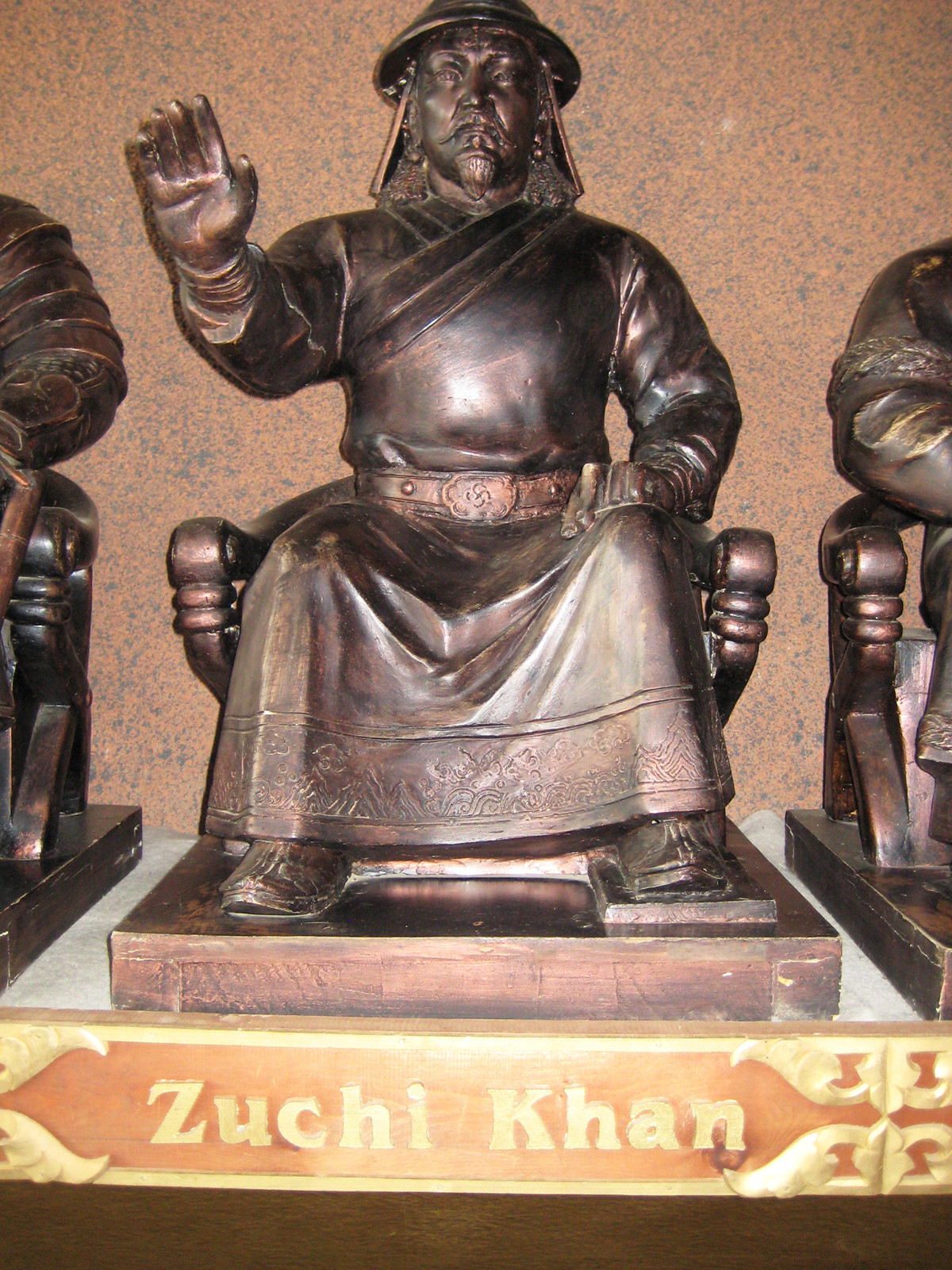 Finally, according to the most gripping theory, the name Siberia comes from the "sipyr" – a people who lived in the Nenets tundra beyond the polar circle (nowadays the Yamalo-Nenets Autonomous District). The "sipyr" people were also called "sikhirtya". The Nenets people believed that the sikhirtya lived in the ground and herded "earth deer" – or mammoths. Previously this ethnic group was thought to be totally mythical but new archaeological discoveries (link in Russian) were made in Jan. 2020 and the archaeologists may have found sikhirtya settlements.

About 1,500 BC, Iranian-speaking tribes began to settle in Siberian territory. A thousand years later, in the 6th century BC, Turkic-speaking peoples arrived, and by the 12th-13th centuries AD, as a result of the mixing of Iranian, Turkic and native Ugric tribes, the ethnic group of Siberian Tatars had evolved.

How did the Khanate of Sibir come into being? 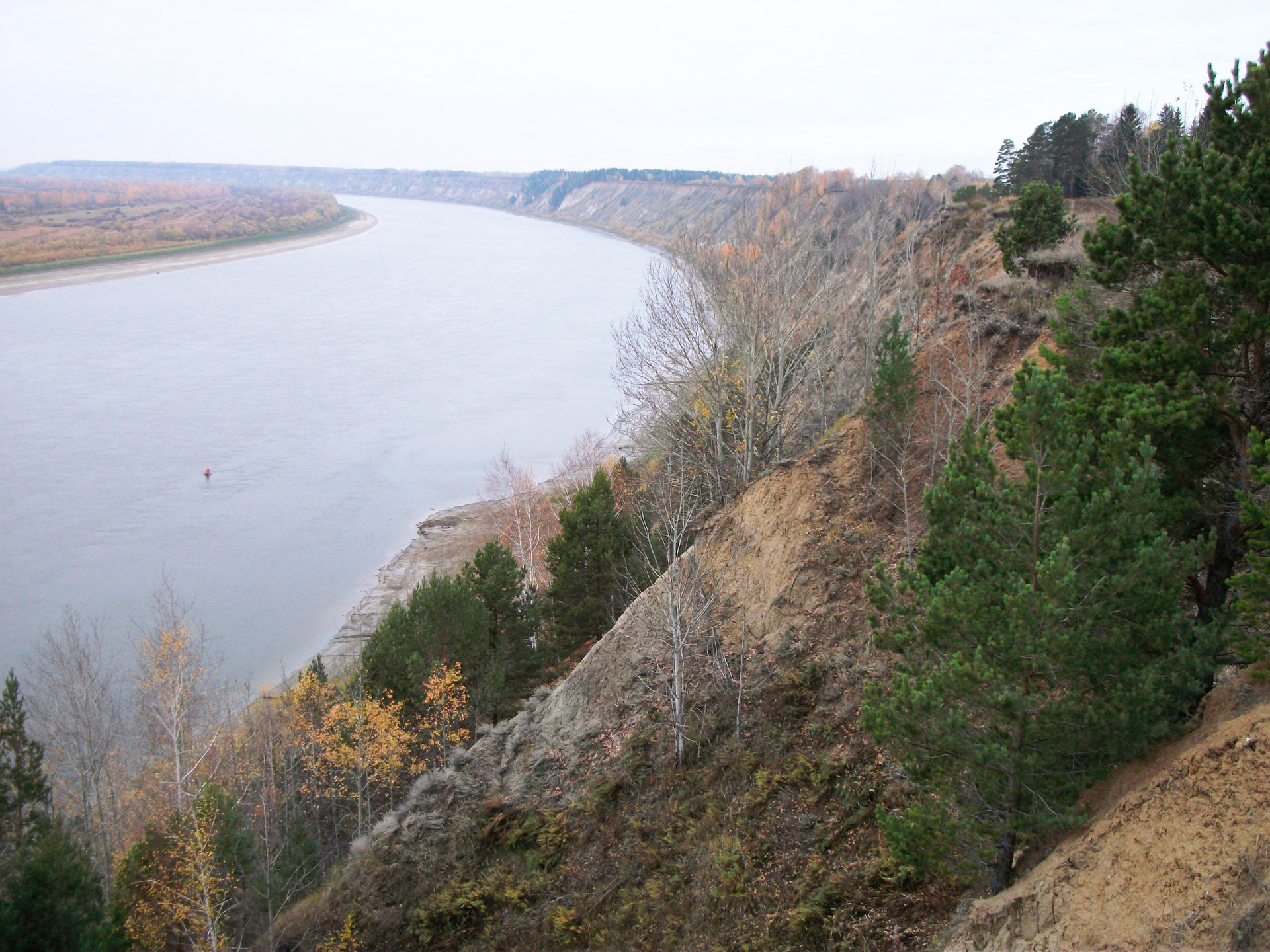 The hill where once Kashlyk (Sibir) stood. Tyumen region, Russia

At the beginning of the 13th century, the Mongol Empire of Genghis Khan subjugated the tribes that inhabited Siberia. To safeguard his life and the prosperity of his lands, one of the local rulers, Prince Taibuga, agreed to submit to Genghis Khan. Taibuga started collecting tribute from his territories for Genghis Khan and founded Chimgi-Tura, the capital of the first state in Siberia known to us, the Khanate of Tyumen (which later became the Khanate of Sibir).

In 1224, not long before his death, Genghis Khan divided his possessions between his sons. The lands of the future Golden Horde, including the future Khanate of Tyumen, went as an ulus – i.e. a territorial inheritance from which tribute was exacted – to Genghis Khan's son Jochi and not long afterwards, following his death, to Genghis Khan's grandson Shayban [or Shiban]. The latter founded the Shaybanid dynasty, rulers of the Ulus of Shayban. When, at the end of the 13th century, powerful ruler Öz Beg became leader of the Golden Horde, he allowed the ulus, which was already known as the Tyumen Ulus, to keep its autonomy and self-government. Öz Beg reformed all the other uluses of the Golden Horde and subdued their princes. However, in the early 15th century, as a result of a political crisis in the Golden Horde, the Shaybanid dynasty ulus declared its independence, and in 1420 the Khanate of Tyumen came into existence. Its founder was the Shaybanid Khoja Muhammad. In 1495, a hostile khan, Taibuga, attacked the Khanate of Tyumen, killed the Shaybanid Ibak Khan and moved the khanate's capital from Chimgi-Tura to Kashlyk, which was also called Sibir. From then on the Taibugids became the rulers of the new khanate, which was by then known as the Khanate of Sibir. 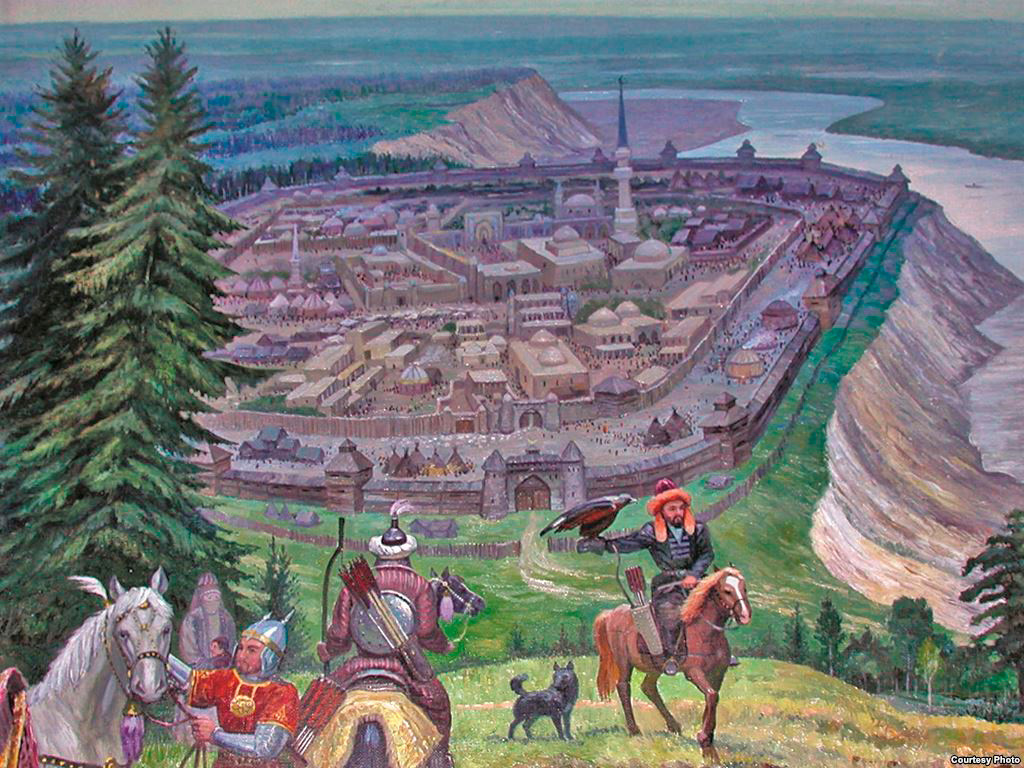 This is how Kashlyk may have looked during its heyday.

The Khanate of Sibir was a country of many nations and many beliefs, but the Turkic population dominated over the indigenous local tribes of Khanty, Mansi, and others. The head of state was the khan, who was elected by the Turkic aristocracy. The khan lived in a fortified palace built of mud bricks. For the construction of such buildings, architects from Central Asia who knew how to design characteristic decorative features were usually invited. But such palaces were short-lived because of the material they were made of, and not even their remains survive today.

The population engaged in cattle herding, hunting, and fishing. Little land was cultivated but crafts flourished: pottery, weaving, and metalworking. Inside the city, ordinary citizens lived in yurts [round tents], rows of which formed whole streets. The Khanate of Sibir was very much engaged in trade as it stood on the trade routes from Asia to Europe.

Why did the Khanate of Sibir disappear?

'Conquest of Siberia by Yermak' by Vasiliy Surikov, 1895. Pictured is the Battle of Chuvash Cape

In the 16th century the Tsardom of Muscovy conquered the Kazan and Astrakhan khanates, major "slivers" of the Golden Horde which had resisted the authority of the Russian Tsar. The seizure of Kazan was particularly fierce. Although the Khanate of Sibir was separated from Muscovy by the barely passable Ural Mountains, in 1555 the Taibugid khan, Edigei, recognized the authority of Moscow and even began to pay tribute. 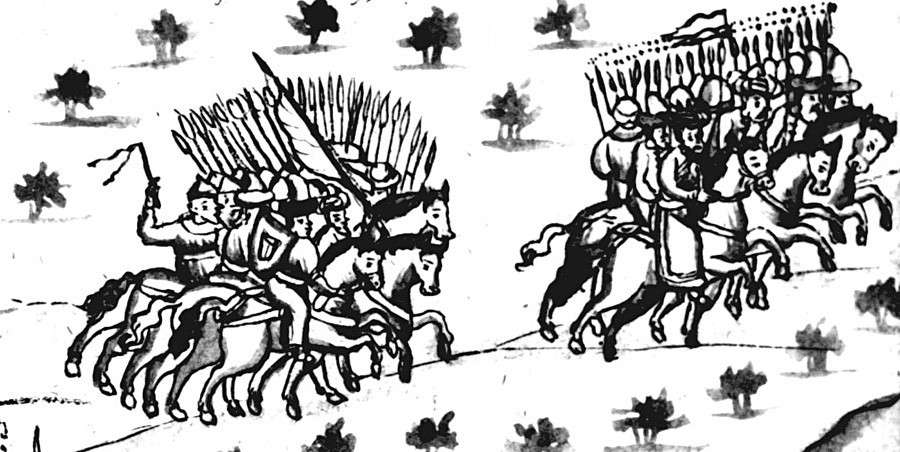 But in 1563 a Shaybanid, Khan Kuchum, seized power in the khanate. In 1571 he sent a huge tribute of 1,000 sable furs to Moscow but, following this generous gesture, Kuchum broke off the tribute arrangements and a year later sent his nephew Makhmet-Kul on a "reconnaissance" to the Russian lands. Makhmet-Kul harried the populations of villages belonging to the Stroganov merchant family, which extracted salt in the Perm salt mines - he plundered several villages and captured their inhabitants. Fearing that the Tatar hordes would ruin their business, the Stroganovs began to look for protectors and hired the Cossack leader Ataman Yermak and his druzhina [private army].

In 1582, Yermak with several hundred heavily armed fighters set out from Oryol-Gorodok, the Stroganovs' fortified residence, crossed the mountains and captured the old capital of the Khanate of Tyumen, Chimgi-Tura. Soon afterwards the decisive Battle of Chuvash Cape took place. At the confluence of the rivers Tobol and Irtysh, Makhmet-Kul gathered 15,000 nomadic Tatar troops, but they were smashed by Yermak's druzhina, which was small but armed with arquebuses, an early type of shoulder-fired gun. Three weeks later Yermak seized Kashlyk, from which Khan Kuchum had already escaped into the steppes.

How did the Khanate of Sibir become part of Russia? 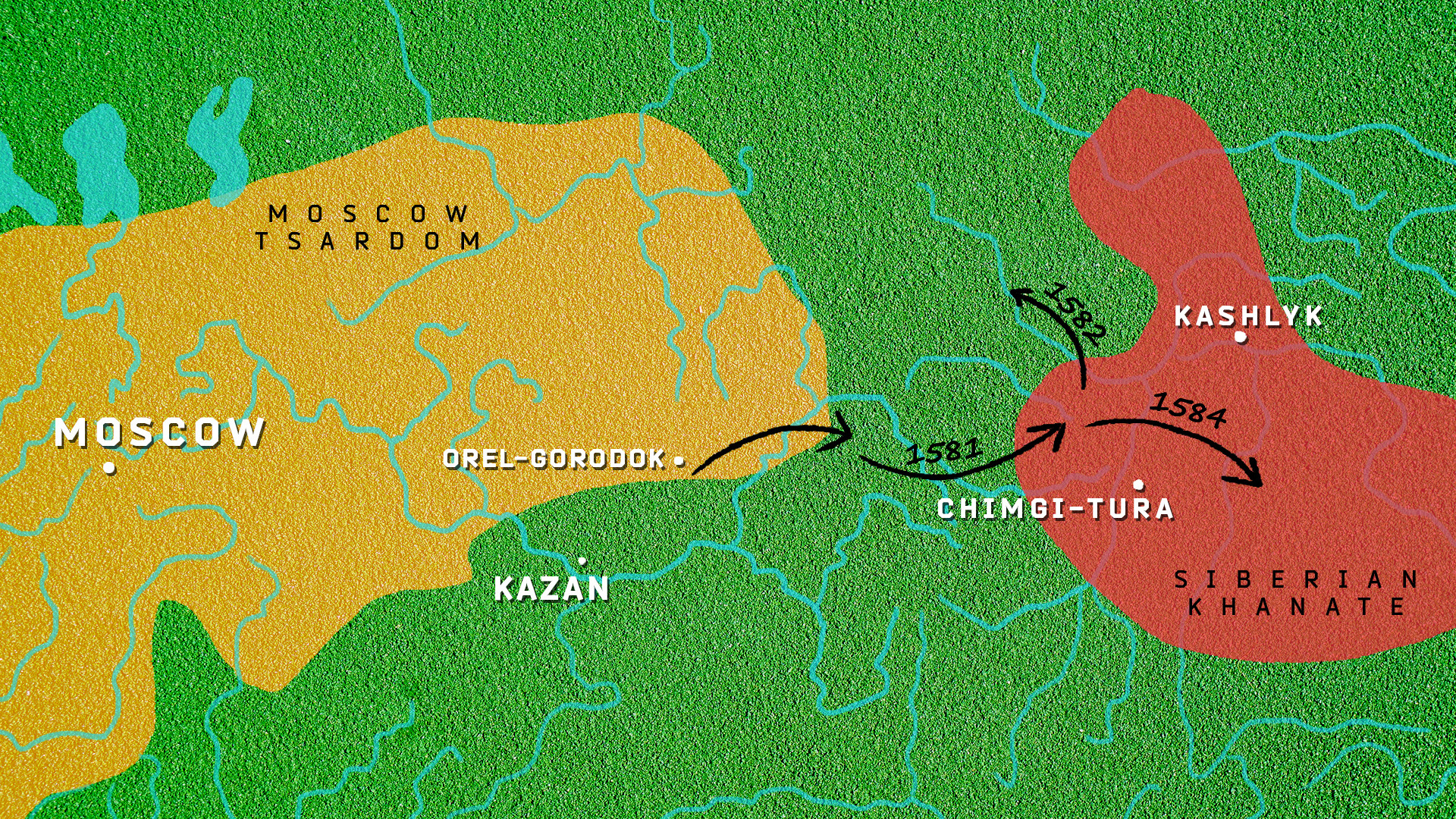 Map of the Moscow Tsardom compared to the Siberian Khanate. Black arrows indicate the approximate route of Yermak's army.

Yermak never returned from his Siberian campaign – he was killed in one of the skirmishes – and Khan Kuchum never surrendered to the Moscow Tsar, disappearing into the steppe and attacking Russian garrisons for a long time, until the very end of the 16th century. But in Yermak's footsteps, other Russian druzhinas and conquerors, who were now less fearful of the defeated Tatars, began to make sorties beyond the Urals. 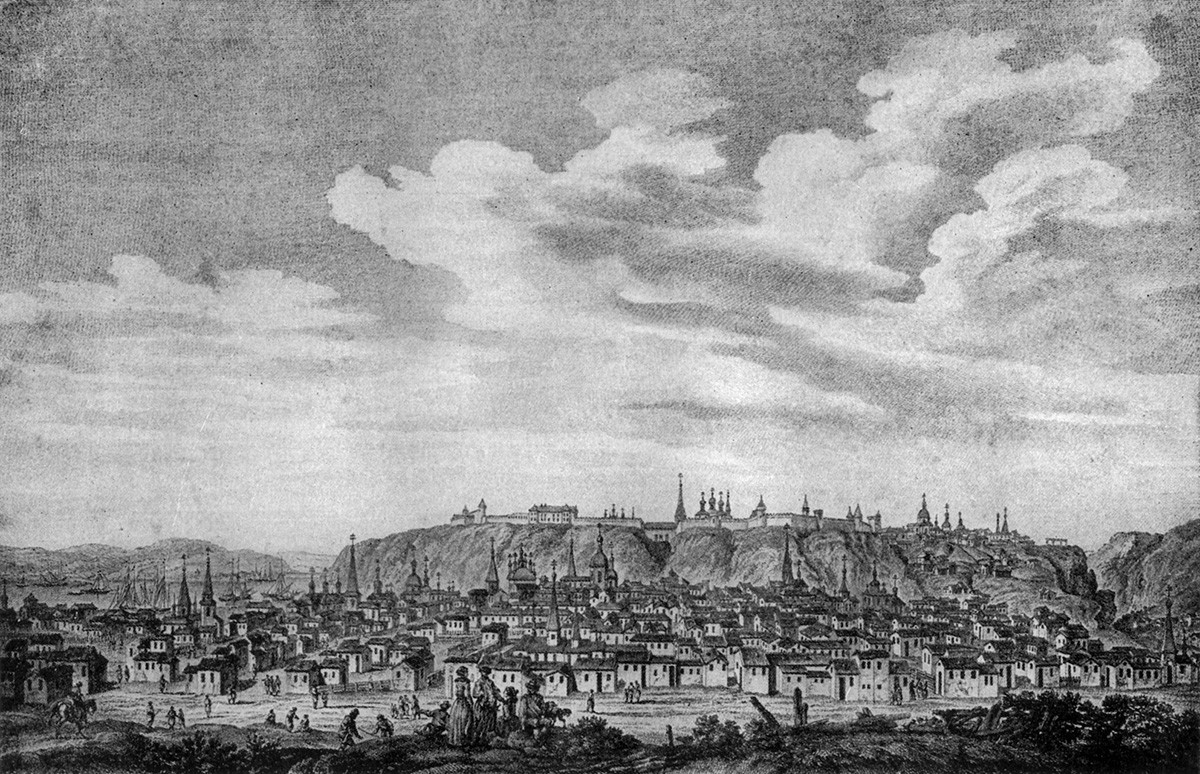 Tobolsk in the early 18th century.

The fortresses of Tyumen, Beryozov and Tobolsk soon sprang up. The latter, founded 17 km from Kashlyk, was for a long time called "Sibir town". Tobolsk became the center of Russia's colonization of Siberia. It gradually developed and in 1708 became the capital of Siberia Governorate, the largest in Russia.