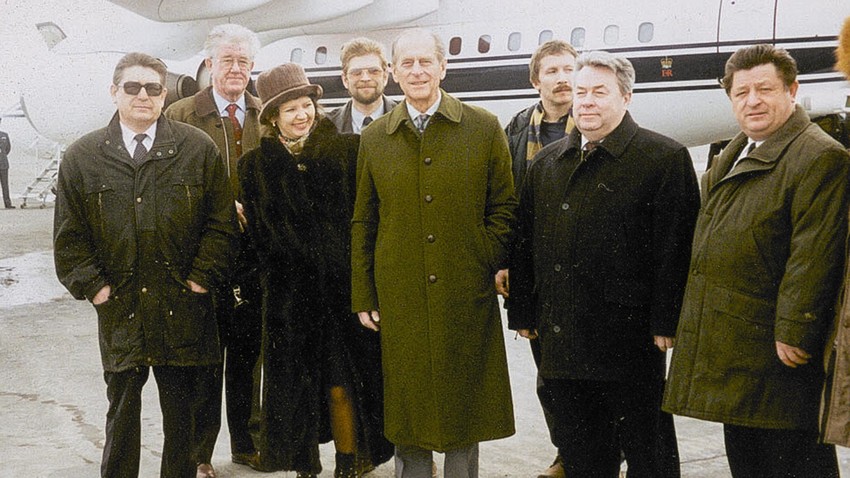 Victor Nikiforov
This Royal trip received little attention in Great Britain and was misrepresented in Russia.

The story of the Duke of Edinburgh’s visit to Russia’s Far East in 1997 was not publicized widely in the UK for the simple fact that it supposedly lacked “sensationalist” details. In Russia, however, various tall tales about the visit ran wild.

A few publications reported that the landing of the Prince’s plane was an unplanned improvisation, caused by an environmental scandal involving local Russian officials, who were allegedly using the skin of an Amur tiger.

Meanwhile, online publications, published years later, hinted that the Duke of Edinburgh had made a personal decision to land, as he was piloting the plane in person over Russia’s Far East. On top of that, it was reported that when the plane landed, Prince Philip — the recently deceased husband of Queen Elisabeth II — managed to get out of sight of his escort and wandered off into the wild — not without small adventures — before he was finally located and escorted back to civilization, albeit a shabby hotel on the outskirts of Russia’s Far East.

In reality, however, the true story of Prince Philip’s visit to Russia’s Far East in 1997 is far less dramatic. Yet, it’s not entirely devoid of memorable anecdotes that happened along the way.

In 1996, Prince Philip had just stepped down as the president of the World Wildlife Fund for Nature, but retained the status of the President Emeritus for the organization concerned with wilderness preservation.

By that time, the WWF had opened its representative office in Russia — now an independent country and no longer a Soviet republic — to engage in the preservation of such extinct animals like the Amur tiger, Far Eastern leopard, polar bear, snow leopard, Atlantic walrus, bison and others.

In the capacity of President Emeritus, the Duke of Edinburgh visited WWF projects in over fifty countries, Russia being one of them. On March 15, 1997, his plane landed at Khabarovsk International Airport, in Russia’s Far East. 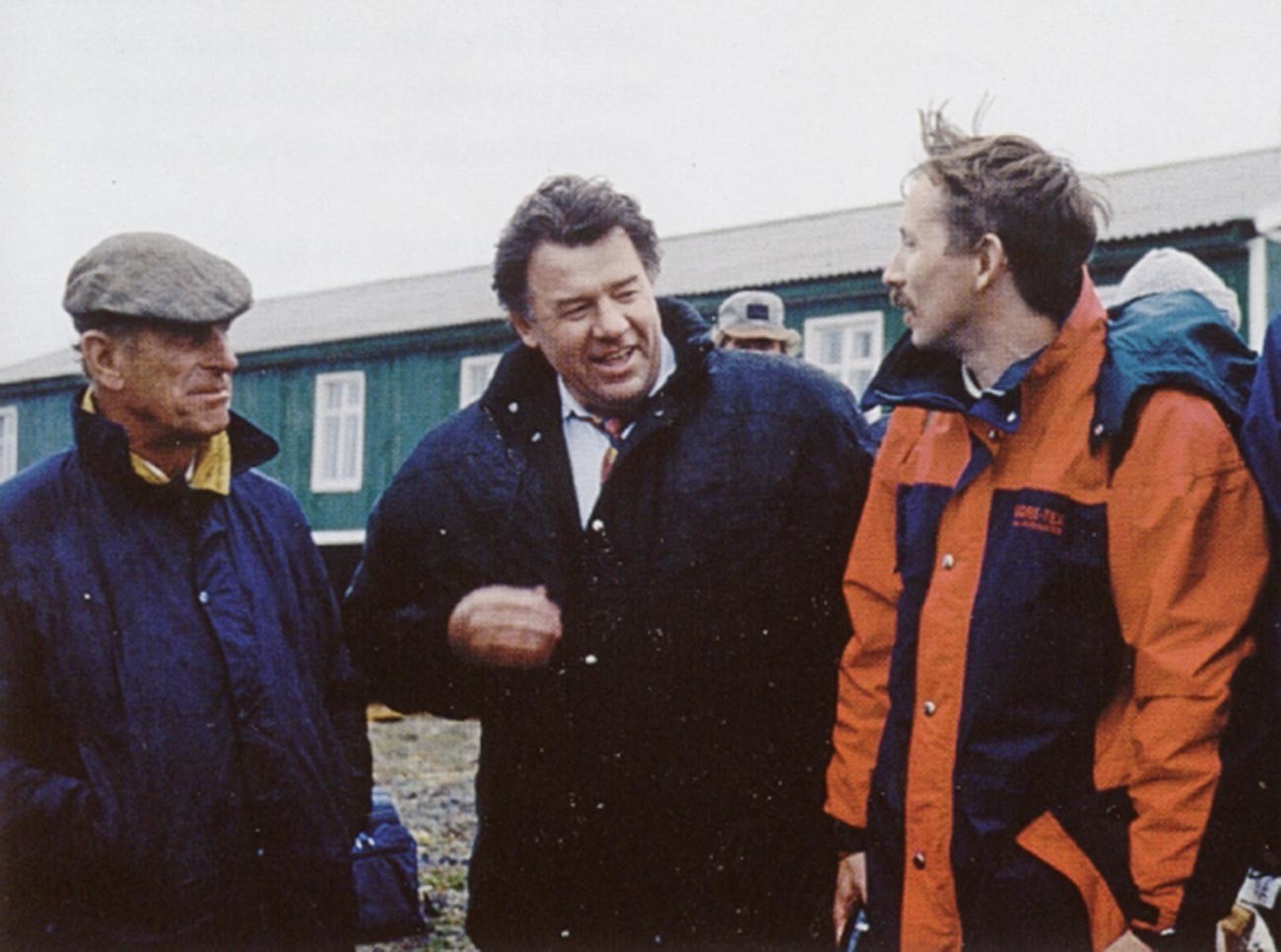 Prince Philip (on the left) and Victor Nikiforov (on the right). Nikiforov currently works as the Conservation Director at the Tigrus Conservation Fund.

On Prince Philip’s itinerary was visiting the Bolshekhekhtsirsky Nature Reserve, meeting with local officials — including the Governor of the region — as well as with the WWF staff and, if he was lucky enough, seeing Amur tigers in the wild.

Upon arriving at the airport in Khabarovsk, Prince Philip was met by a few functionaries. Among others, the Duke of Edinburgh was met by Victor Nikiforov, who, at the time, served as the Director of Conservation at the WWF Moscow office.

“The main request was to refrain from taking photos [of Prince Philip] and if we were to take a photo, then to ask for permission. Mobile phones were not around at the time, only film cameras and this made the request easier to adhere to,” said Nikiforov, who currently works as the Conservation Director at the Tigrus Conservation Fund. 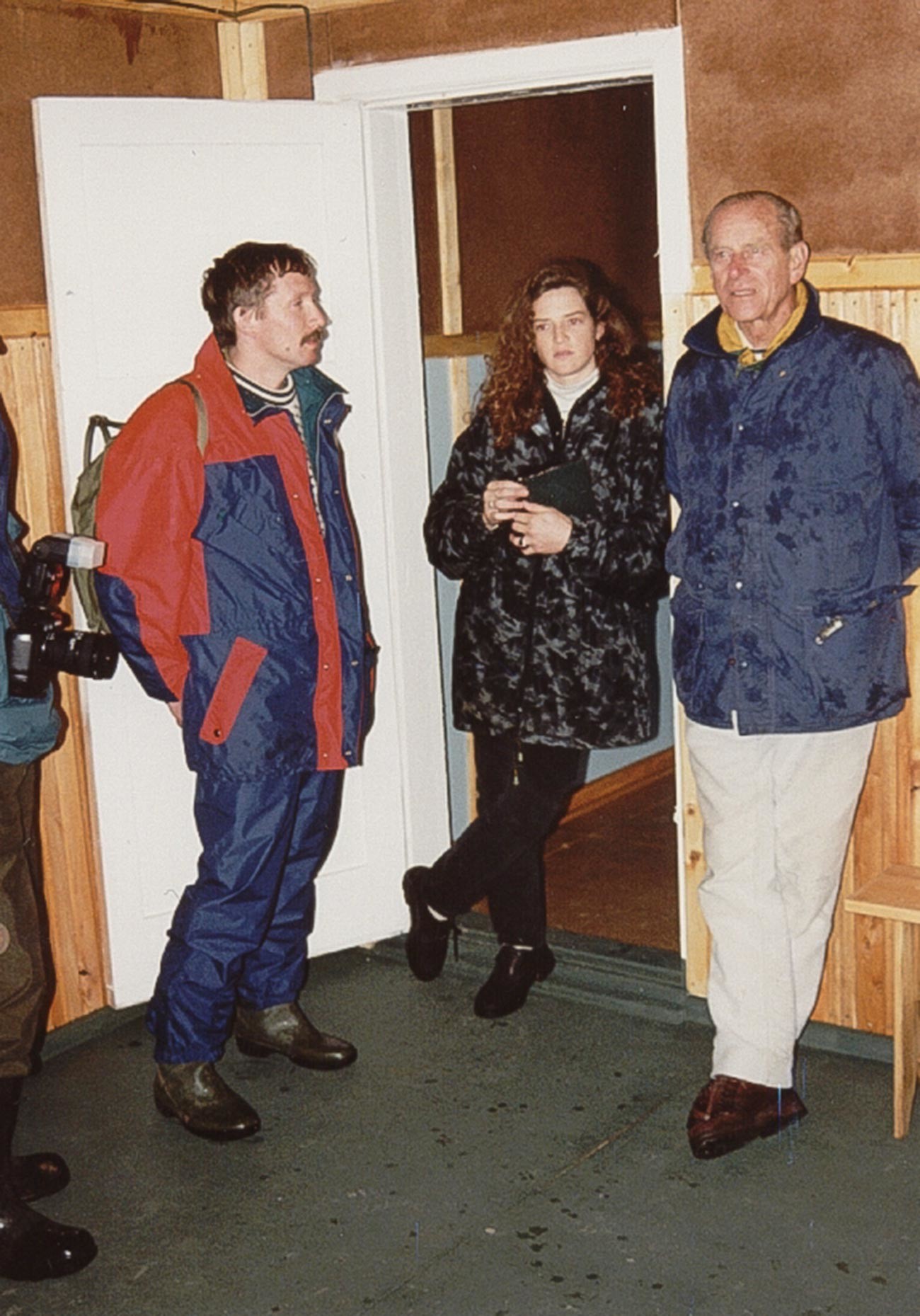 Nikiforov was among the limited group of people who escorted Prince Philip to the nature reserve. The visitors spent much time together, interacted, dined at one table and stayed in the same hotel.

“When you addressed him for the first time, you used ‘Your Royal Highness’, but, quite soon, we left the formalities behind,” said Nikiforov. As the expedition was gaining momentum and the interaction between the royalty and Russian guides became a routine, behind the facade of a member of the British royal family rose an amiable personality and a character of an adventurer.

“Despite his age [Prince Philip was 76 years old at the time of the visit], he was in excellent shape, had a military bearing and piloted a plane during take-offs and landings. For example, he would wave goodbye at the ramp and then go to the cockpit to take off as a co-pilot,” said Nikiforov, who accompanied Prince Philip on a few flights in Russia’s Far East. 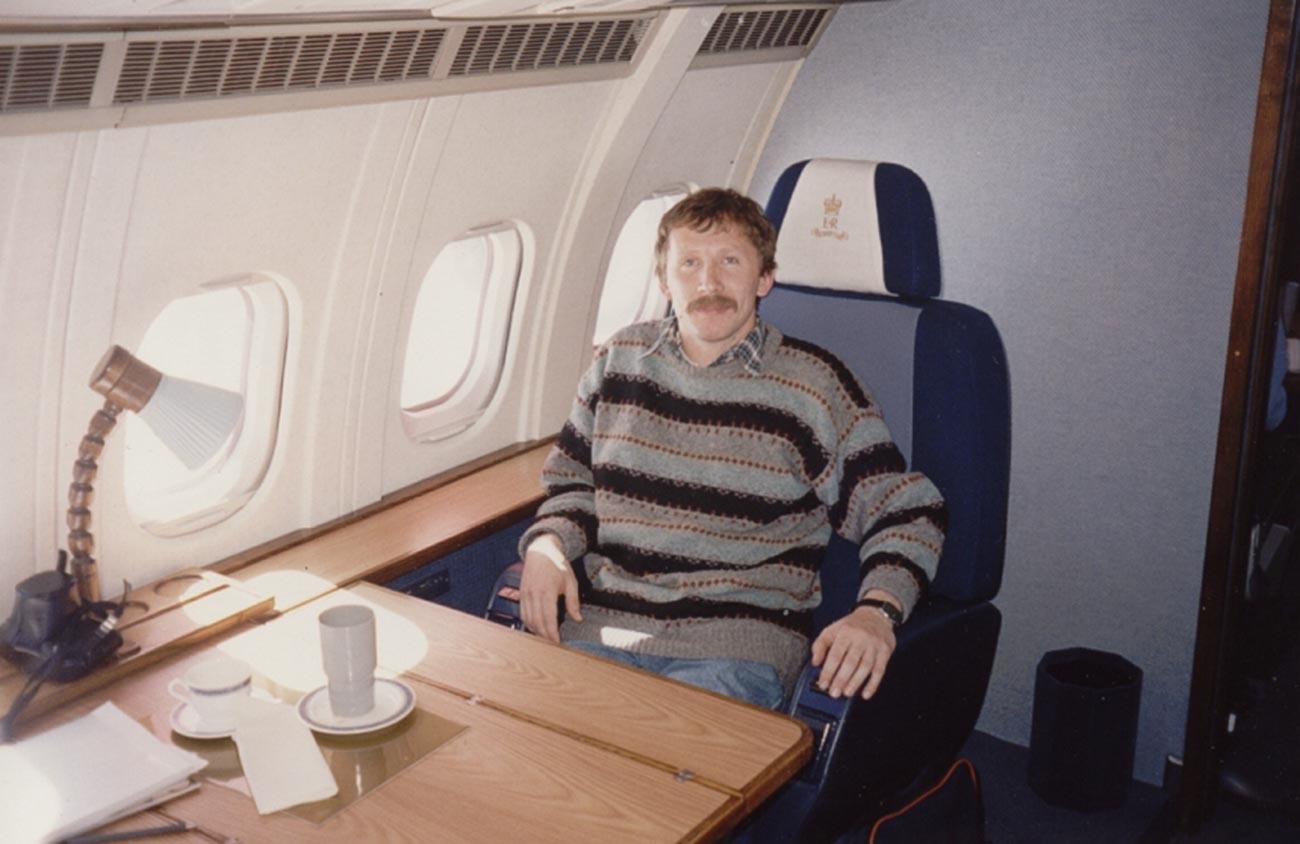 Besides the protocol events, press conferences and speeches, Prince Philip was really interested in observing tigers in the reserve. Since tigers might be hard to spot at a person’s whim, local Russian gamekeepers had found a footprint of a tiger and preserved it to show to Prince Philip, should they fail to locate a real tiger.

Nikiforov laughed at the reports claiming that Prince Philip walked too fast and eventually broke away from the group, leaving his escort behind. “The footprint was near the base, roughly a thousand steps away. It was impossible to stroll off. Besides, Prince Philip was constantly guarded by a [Russian] man in plain clothes, but who most certainly was an officer of the FSB. Near the spot, our gamekeepers cooked a field lunch to welcome the guest,” said Nikiforov.

Despite all aspects of the trip being closely monitored and strictly managed, there was still room for funny mishaps. On one occasion, a local cameraman who was filming Prince Philip while strolling backward stumbled and fell in the snow right in front of the Duke of Edinburgh. Prince Philip, who was humbly enduring the annoying attention of cameramen even in the Russian wilderness, growled in fury at the crew who were immediately removed from the scene, leaving the royalty tête-à-tête with the Russian nature.

When leaving Russia, Prince Philip presented the local guides with his signature present: a hand-signed portrait in a frame. Upon receiving a few bottles of locally-produced vodka, the Duke of Edinburgh also presented the Russians a jar of sake which he had received as a gift from the Japanese. 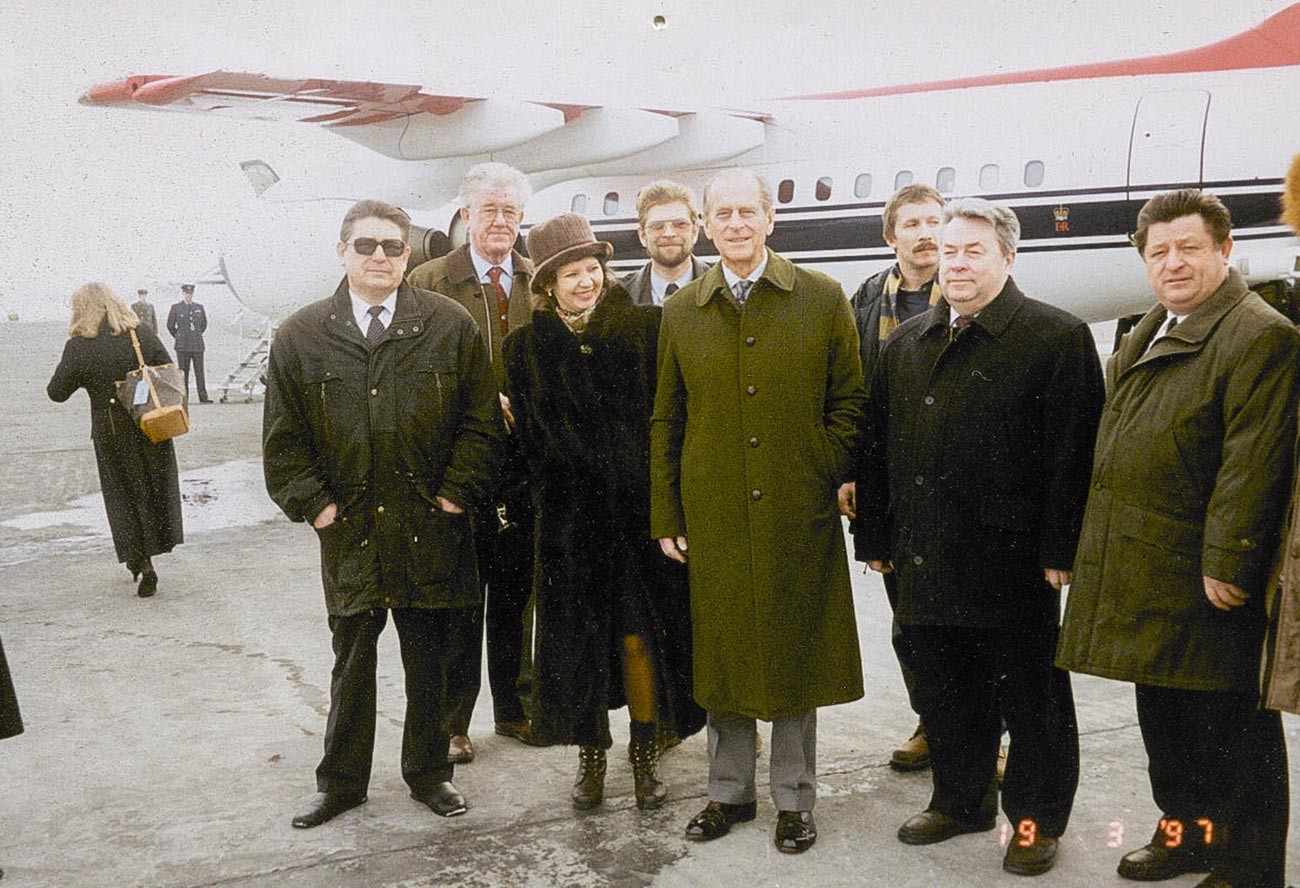 On a more serious note, the Russians appreciated Prince Philip’s company just as much as they appreciated his contribution to their conservation cause in 1997. “He was a reasonable, cheerful and amiable person. His visit to Russia’s Far East benefited our country a great deal in the years of capital accumulation. It was very important that the environmental protection was not commercialized [in time when many spheres in Russia were being liberalized and commercialized as a result of the Soviet Union collapse and subsequent transition to a free market economy], but received some political publicity [due to Prince Philip’s visit],” said Nikiforov.

Click here to find out why Yakutia has been burning all summer.