Why did the USSR set up its own military alliance - the Warsaw Treaty Organization? 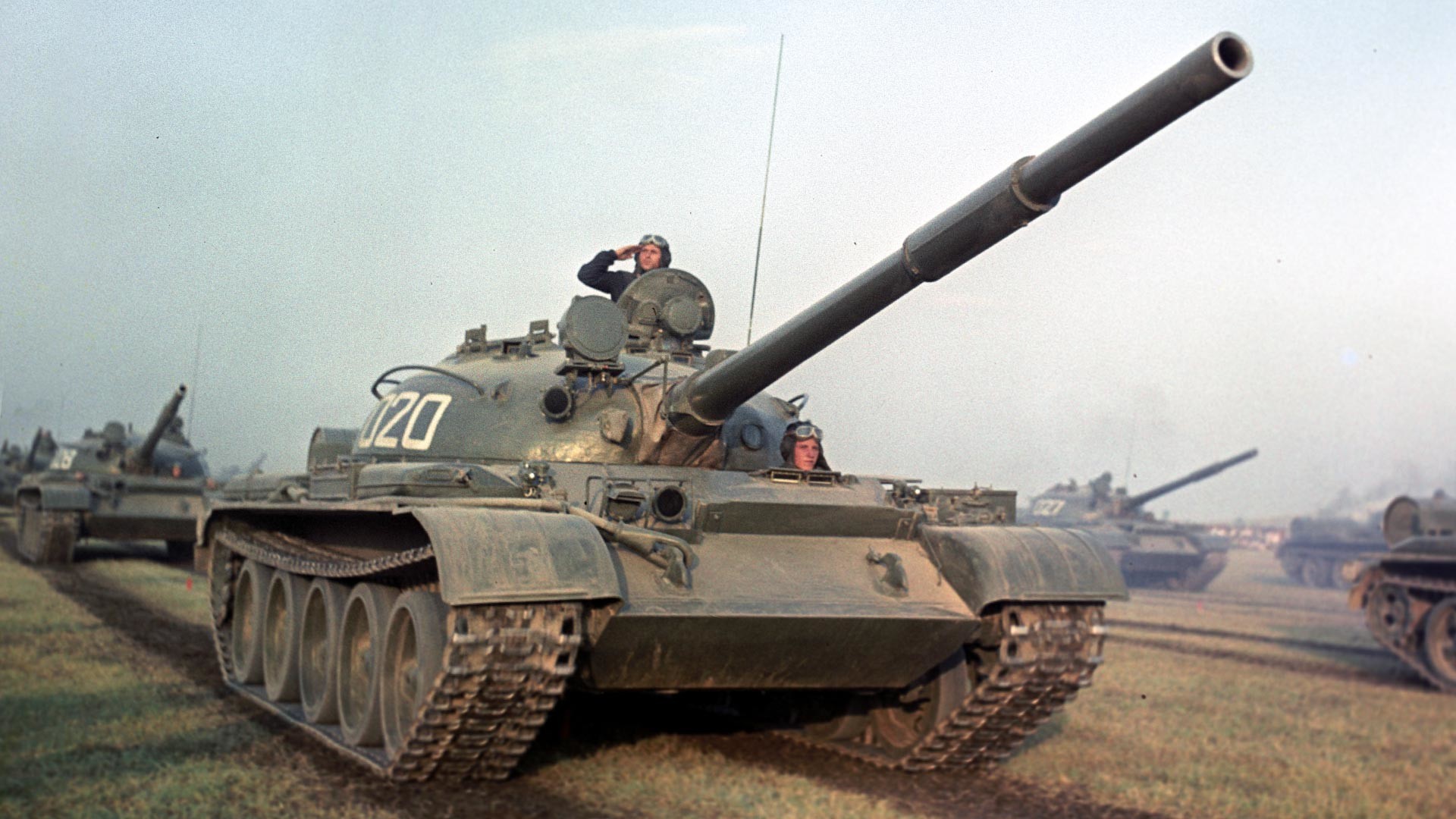 Drills of the Warsaw Treaty Organization in Bulgaria.

Lev Polikashin/Sputnik
The Soviet Union had to think of a military bloc of its own after the West created NATO.

Throughout the second half of the 20th century, the Warsaw Treaty Organization (better known as the Warsaw Pact) was a never-ending headache for NATO generals. The confrontation between the world’s two most powerful military-political alliances became an integral part of the Cold War era.

However, few people know that “the stronghold of peace" and “the shield of socialism” - as the Warsaw Pact was often referred to - was established much later than its western rival.

An alliance of socialist countries 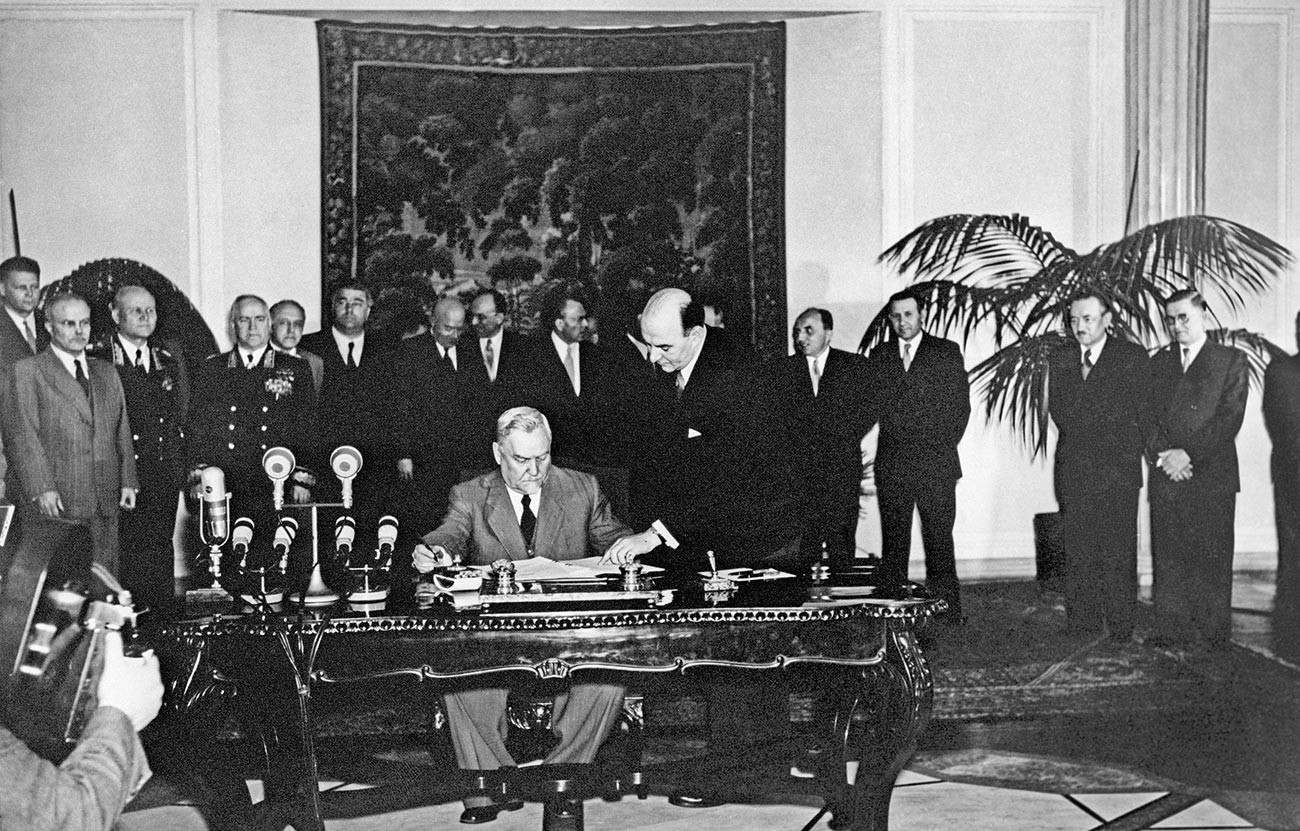 Signing of the Treaty of Friendship, Cooperation and Mutual Assistance in Warsaw in May 1955.

The leaders of the USSR and of the “people's democracies”, as the socialist countries of Eastern and Central Europe that were in the Soviet Union’s orbit were called at the time, were quite unfazed by the Western powers’ decision to establish the North Atlantic Alliance in 1949.

The Eastern Bloc believed that the bilateral defense agreements that the Soviet Union had concluded with its new allies, as well as the presence of Soviet troops on their territory, were sufficient to ensure its security.

Furthermore, the USSR, which had suffered enormous losses during World War II, lacked the economic potential and technical means to establish a NATO equivalent. The reliability of military personnel in countries that had become Moscow’s friends just recently, and after many of them had been in the enemy camp, was also in doubt. 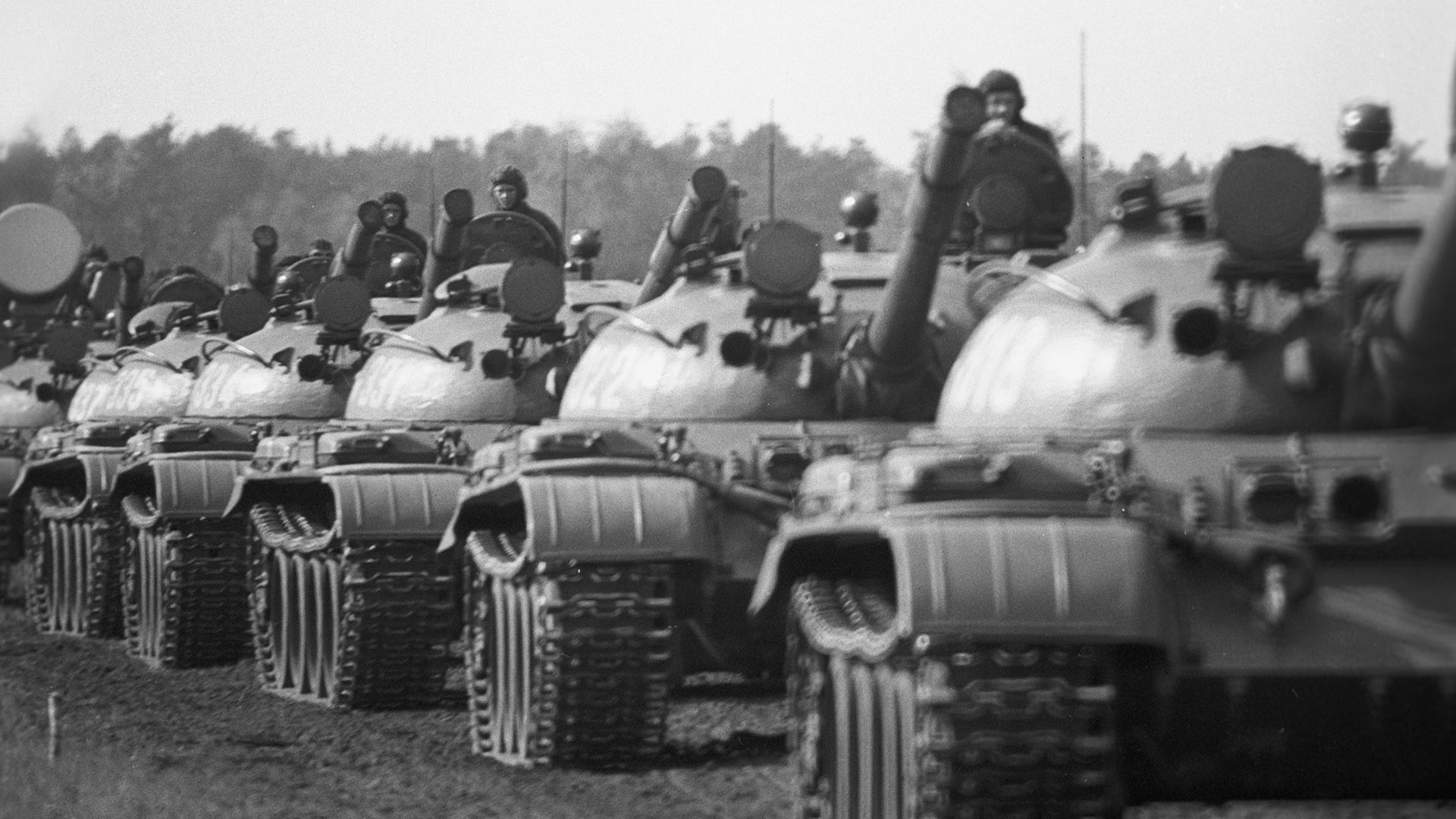 However, over time, the economic situation in the USSR began to improve. Through the efforts of hundreds of Soviet military advisers, the East German, Czechoslovak, Polish, Hungarian and Romanian armed forces were reorganized in line with the Soviet model and many of their officers were trained in Soviet military and military-political academies.

Already in 1951, at a meeting attended by Stalin, the chief of staff of the Group of Soviet Forces in Germany, General Sergei Shtemenko, proposed setting up a “military alliance of fraternal socialist countries”. However, the Warsaw Treaty Organization was established only after the Soviet leader’s death.

The main trigger for its creation were the Paris Agreements signed by the Western allies in 1954, whereby West Germany joined the North Atlantic Alliance and the Western European Union, a military-political organization of European countries, was established. Such an obvious strengthening of the potential enemy’s positions in Central Europe eventually led to the Treaty of Friendship, Cooperation and Mutual Assistance that was signed in Warsaw in May 1955 by the USSR, Bulgaria, Hungary, East Germany, Poland, Romania, Albania and Czechoslovakia, thus formalizing the creation of a military and political alliance of socialist countries. 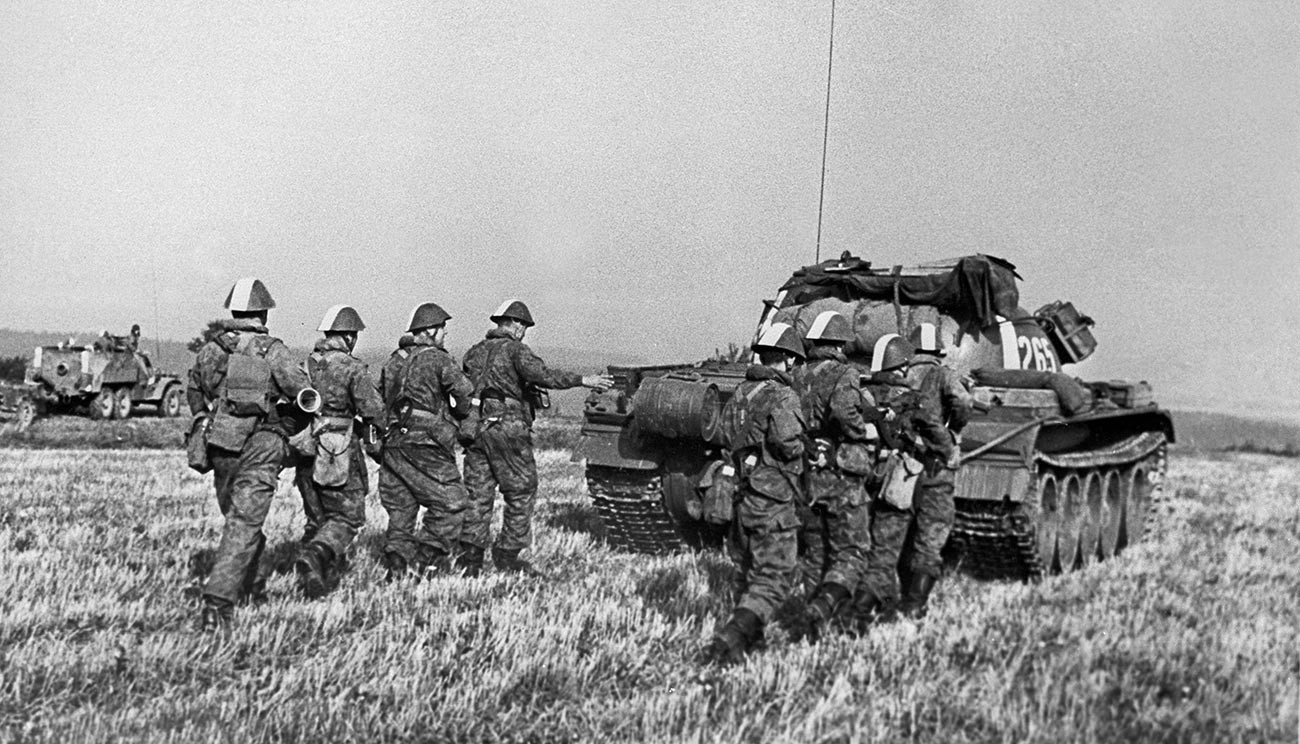 Under that treaty, the parties committed themselves to helping each other in the event of a military threat, to establishing a joint command of their armed forces, which, by agreement between them, would be assigned to this command and to taking “other concerted actions as may be necessary to reinforce their defensive strength, in order to defend the peaceful labour of their peoples, guarantee the inviolability of their frontiers and territories and afford protection against possible aggression”.

Although the treaty proclaimed the equality of its participants, in reality from the first days of the organization’s existence and until its dissolution, the key role in it belonged to the Soviet Union. Drafts of all key documents that were considered by the organization’s supreme body - the Political Consultative Committee (whose sessions were attended by the member states’ heads of government) - were first approved in Moscow.

In addition, the posts of the commander in chief and the chief of staff of the Joint Armed Forces of the Warsaw Pact member states invariably went to Soviet commanders, while representatives of the other armies, as a rule, served as their deputies. 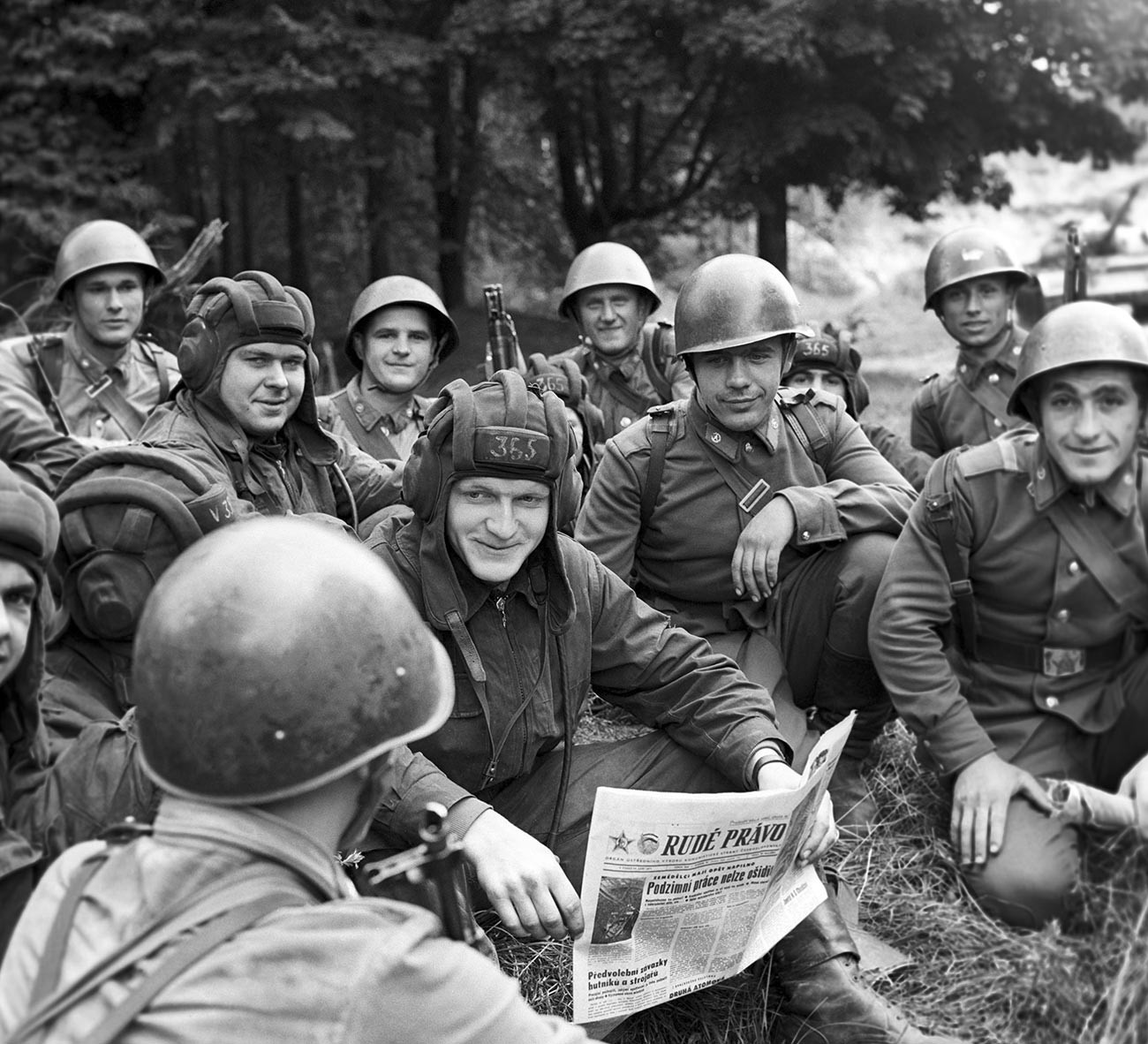 Czechoslovak tank crews and Soviet soldiers during the joint drills.

While the United States meticulously calculated and distributed the financial burden of maintaining NATO among all its member countries, almost all of the Warsaw Pact costs were shouldered by the Soviet Union. The USSR accounted for about 45 percent of funding allocated for the work of the Joint Command and its staff, while its share in financing the Joint Armed Forces and the organization’s military infrastructure exceeded 90 percent.

The Soviet leadership viewed the military-political alliance of the Eastern Bloc as an effective counterbalance to the North Atlantic Alliance. Nikita Khrushchev called the Warsaw Pact “an important stabilizing factor in Europe”.

In addition to being a foreign policy tool for Moscow, the Warsaw Pact also became an important instrument for resolving crisis situations in the socialist camp. 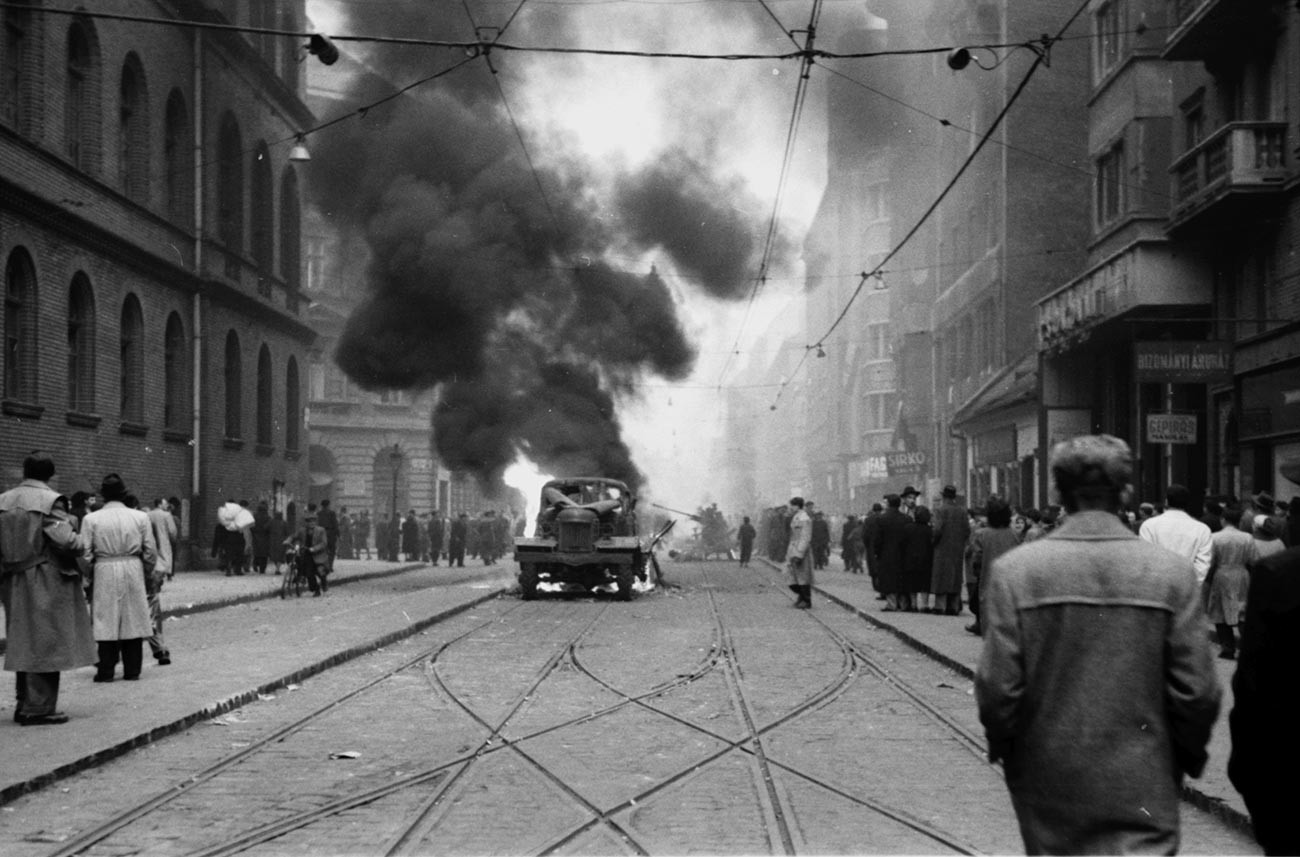 During the Hungarian Uprising (or, as it is known in modern Hungary, the revolution) of 1956, Soviet troops entered the country with the purpose of - according to the order of commander in chief of the Joint Armed Forces Ivan Konev - rendering “brotherly assistance to the Hungarian people in defending their socialists achievements, defeating the counter-revolution and eliminating the threat of a fascist revival”. The official theory was that they were acting “on a request of the government of the Hungarian People’s Republic on the basis of the Warsaw Pact concluded between the countries of the socialist camp”.

If, in Budapest, the USSR managed mainly on its own (with the support of the Hungarian People’s Army and the country”s security services), the task of suppressing the Prague Spring of 1968 involved its Warsaw Pact allies in full. In addition to Soviet units, Czechoslovakia was invaded by troops from Poland, Bulgaria, Hungary and the GDR.

The Warsaw Pact expired in 1985. So, on April 26, the parties extended it for 20 more years, blissfully unaware that it did not have as many as five. After the USSR began to crumble, followed by the fall of socialist regimes in Eastern Europe and the unification of Germany, the existence of the pact became pointless. 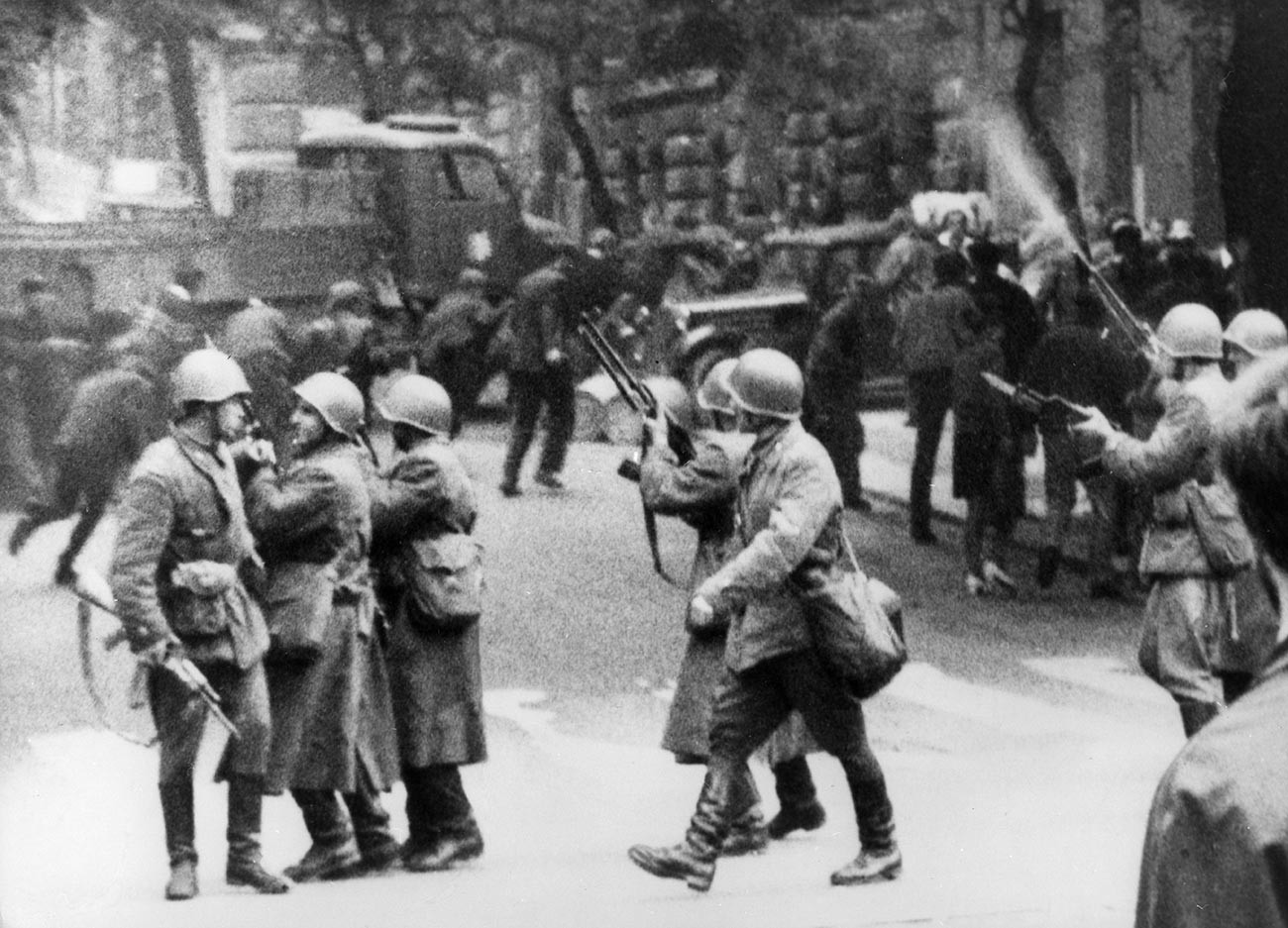 Troops of the Warsaw Treaty Organization in Prague, 1968.

On July 1, 1991, representatives of the USSR, Bulgaria, Hungary, Poland, Romania and Czechoslovakia signed a protocol in Prague on the complete termination of the Warsaw Pact. Meanwhile, over the next 20 years, all of Moscow’s former allies joined the North Atlantic Alliance.