7 Russian fortresses that haven't survived to this day 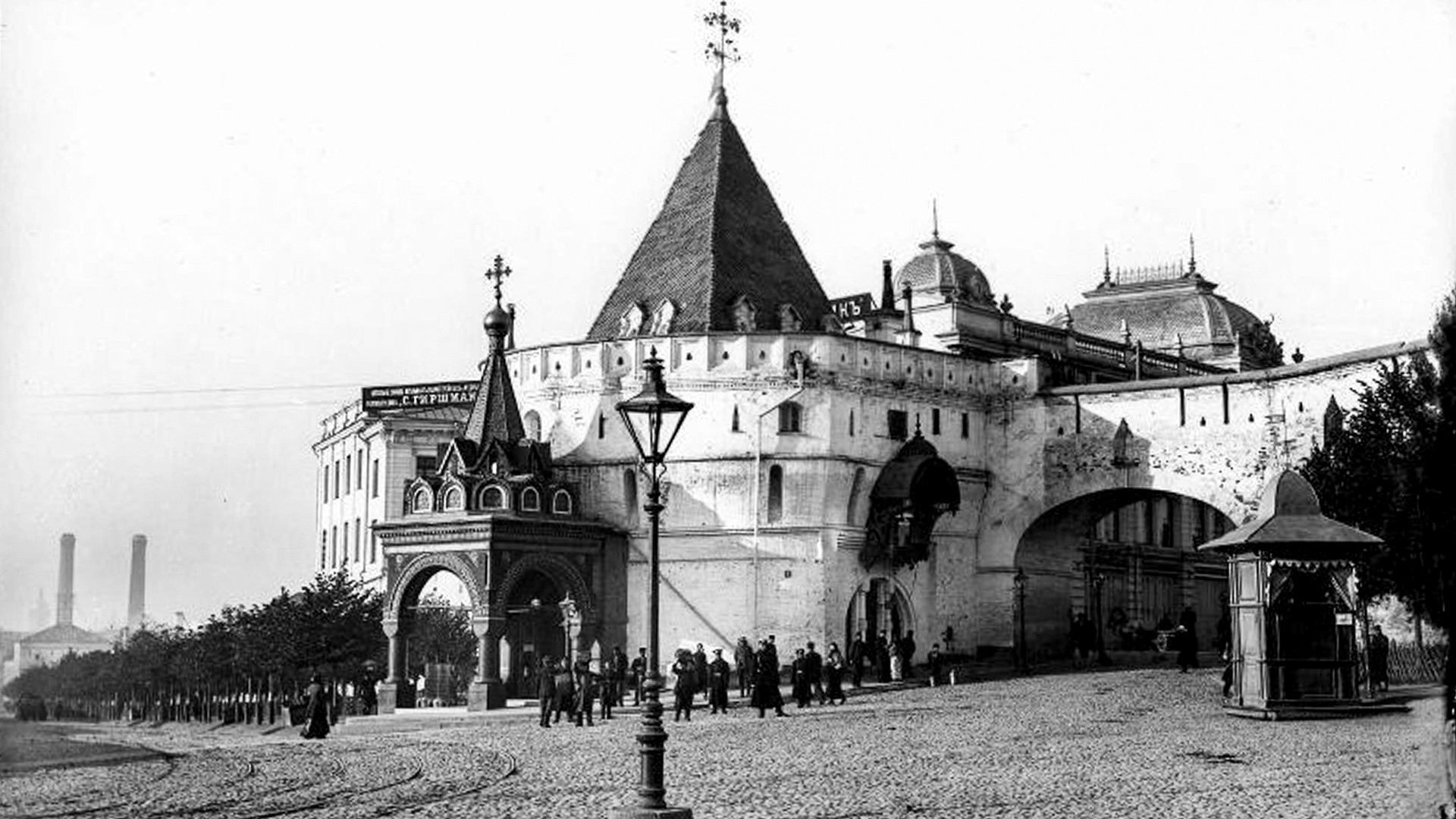 Peter Pavlov/MAMM/MDF
Google Maps would label these places as "permanently closed". Alas, many fortifications in Russia, even the mightiest ones, have not survived to this day. But we can still see them in old engravings, paintings and even photographs. 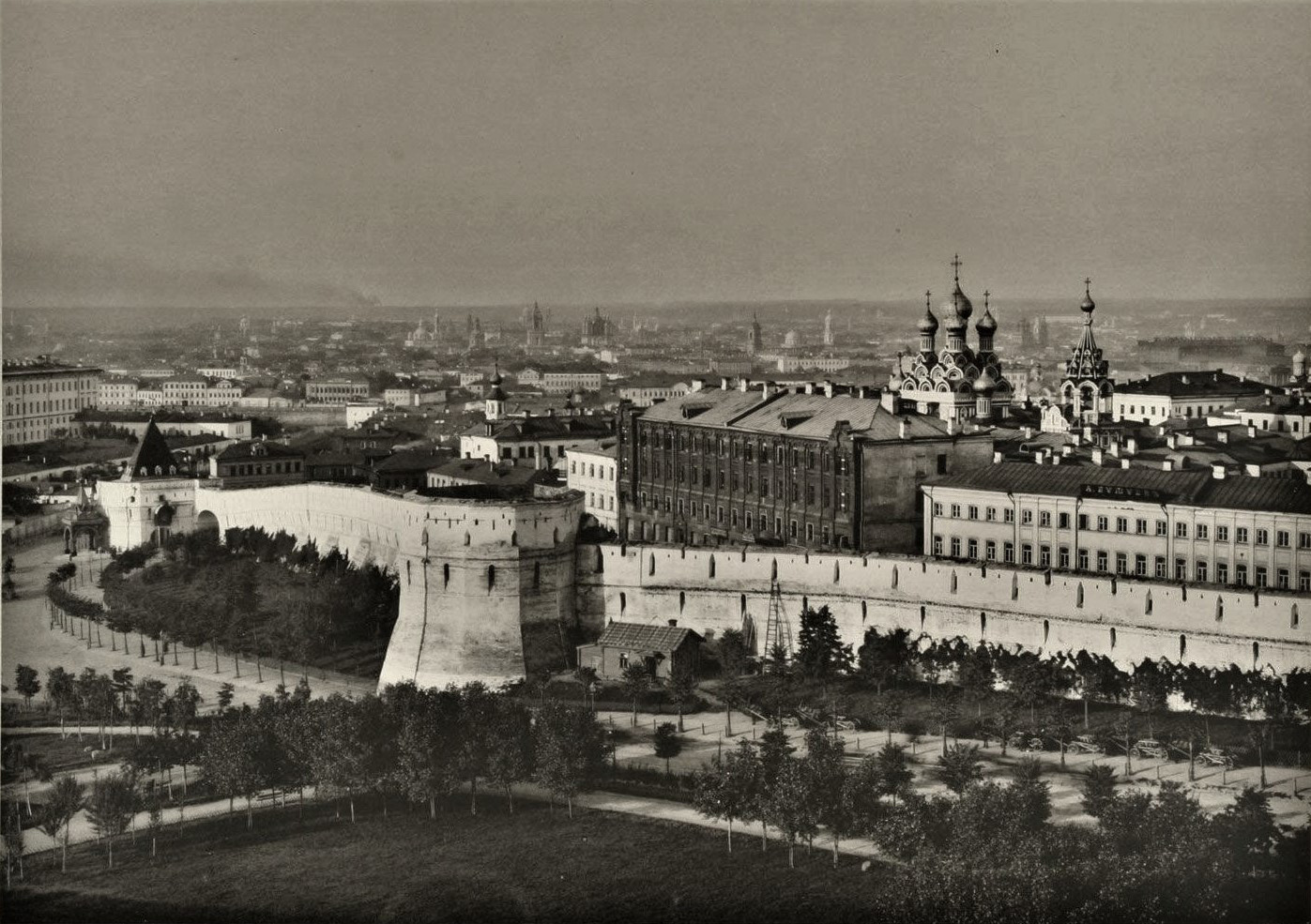 The Kremlin was not the only fortress in Moscow. In the middle of the 16th century the Russian regent and mother of Ivan the Terrible decided to have another line of defense built around the heart of the capital. The Kitay-gorod wall, 2.5 km (1.5 miles) long, was erected in record time. It was lower but thicker than the Kremlin wall and more suitable for the installation of rampart guns. 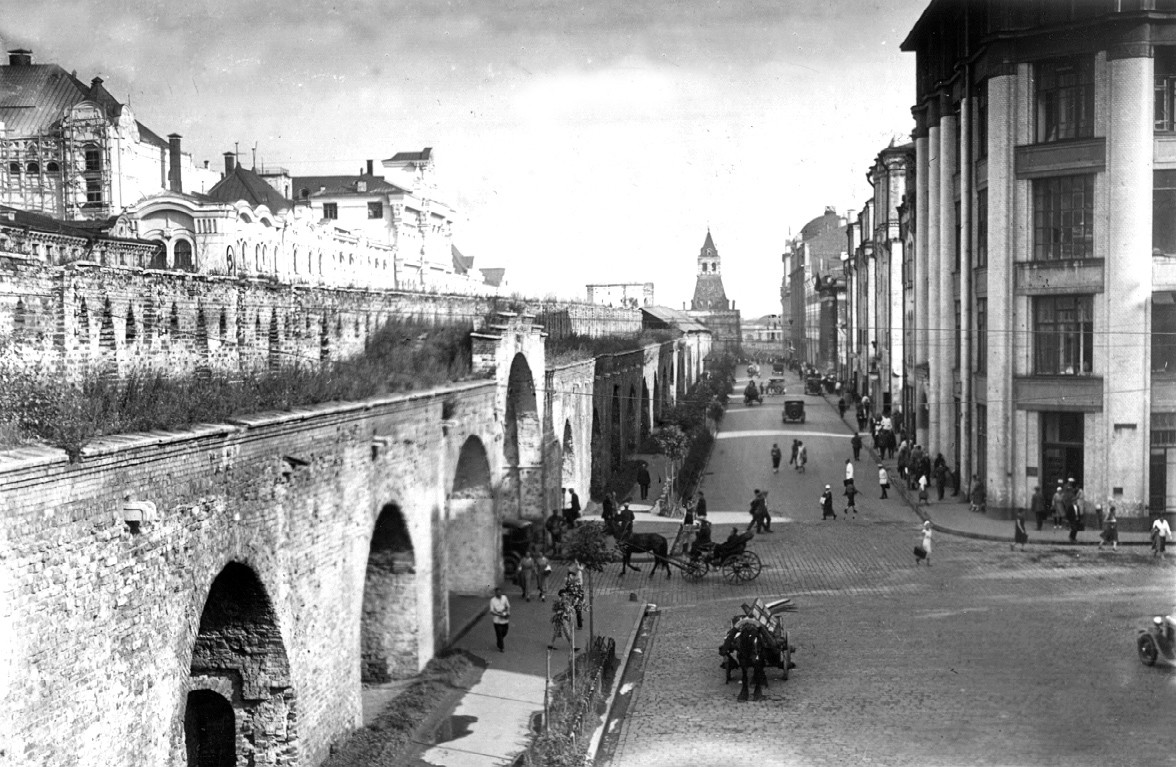 The wall proved its worth by withstanding several attacks. However, at the end of the 18th century it lost its significance as a defensive structure. For a long time it remained just a symbol of old Moscow, but during Stalin's time it was decided to fundamentally reconstruct the city. The streets had to be widened and new thoroughfares built, but the Kitay-gorod wall greatly impeded traffic - it had only eight entrance gates. 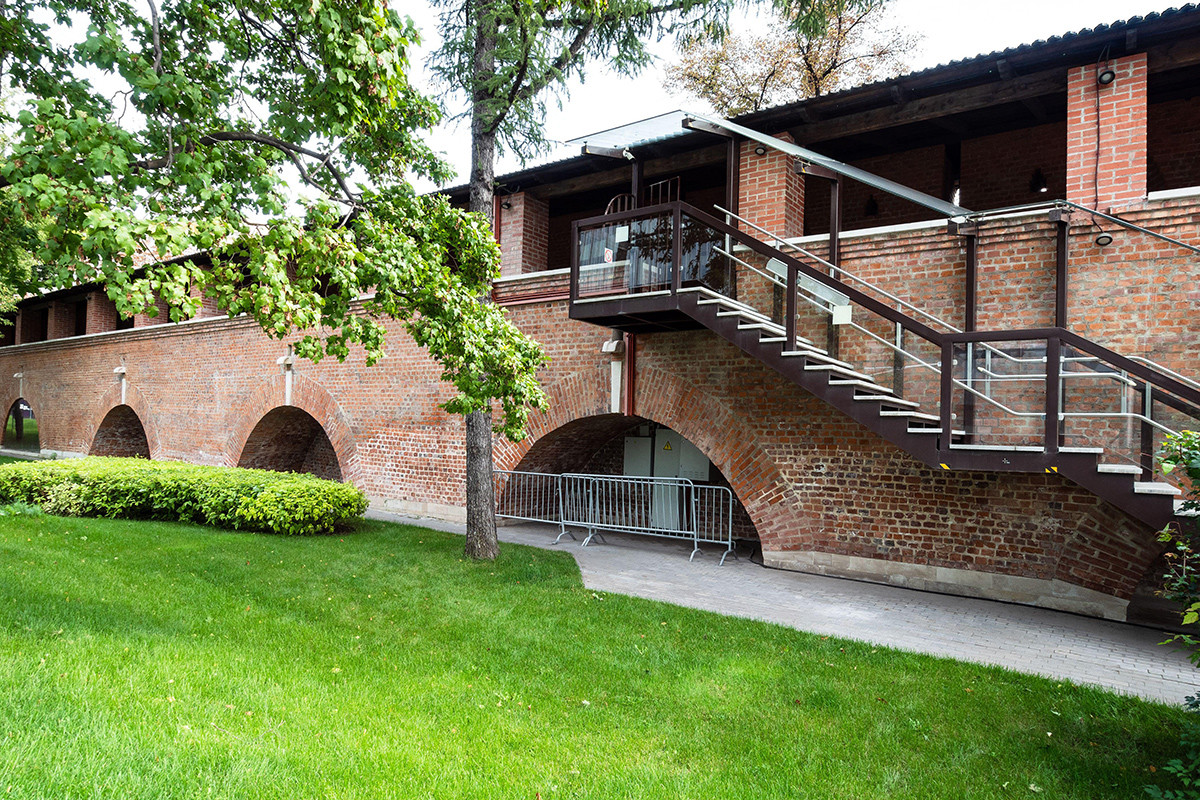 The restored part of the Kitay-gorod wall

In the 1930s, it was demolished, although several sections of the wall have survived and were even restored in the 1990s and 2000s. 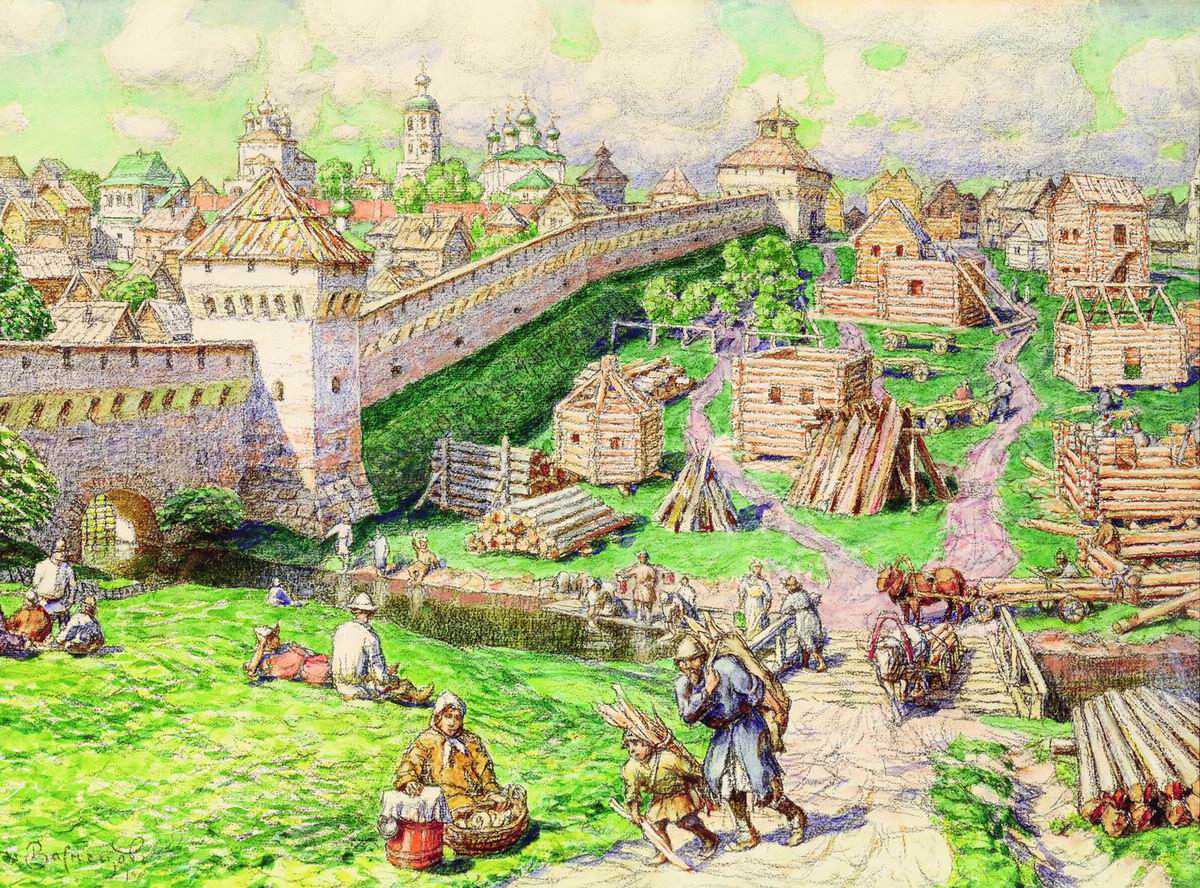 Another fortified ring around Moscow was formed by the Bely Gorod (White City) wall, which was built around Kitay-gorod at the end of the 16th century. During the Time of Troubles the Bely Gorod wall was badly damaged and soon afterwards ceased to serve as reliable protection for the city. Townspeople began to dismantle it and use the stones to build houses. 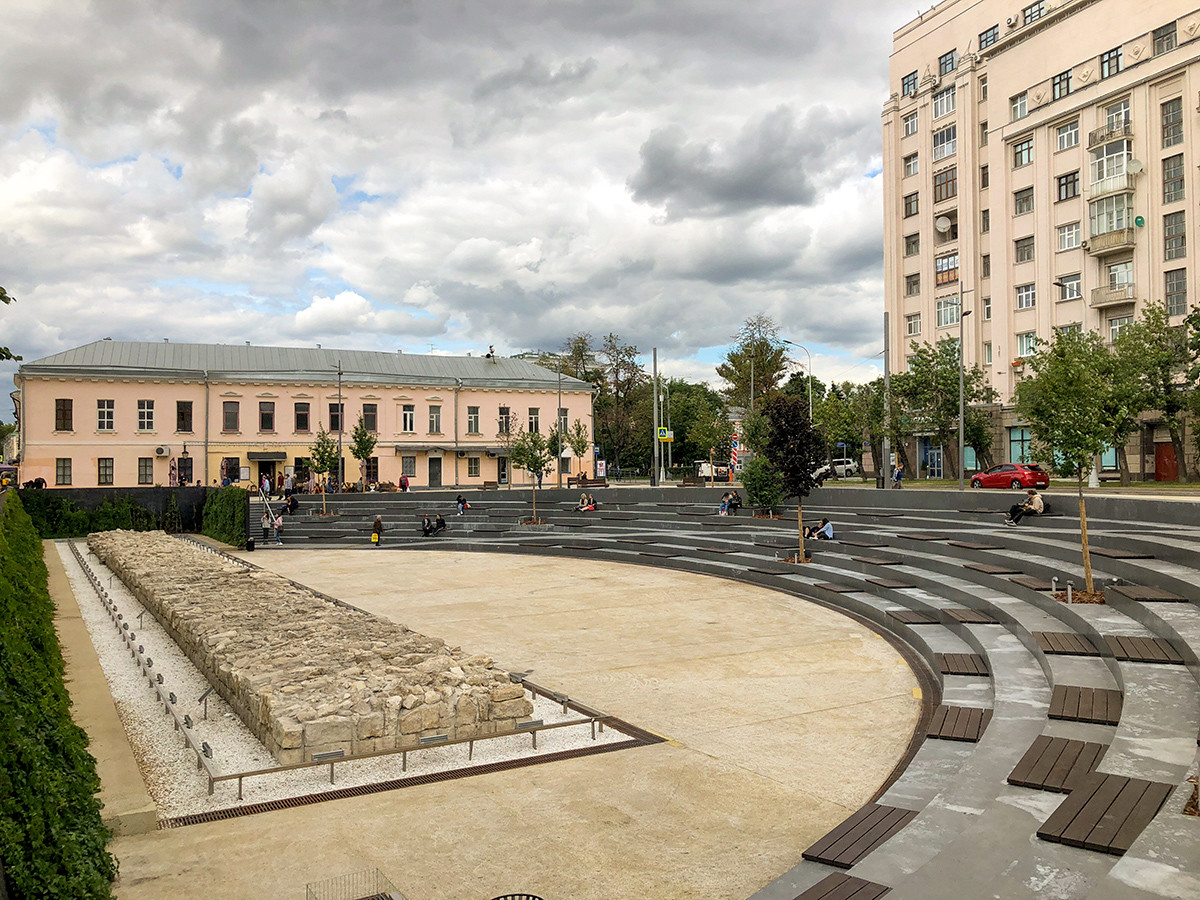 The Yama public space at the Khokhlovskaya Square in Moscow

At the end of the 18th century, Catherine II ordered the wall to be demolished, and a road appeared in its place - today's Boulevard Ring. Remnants of the wall's foundations have survived in some places - for example, on Khokhlovskaya Square. One such section of the wall now forms part of a trendy public space known as Yama [the Pit]. 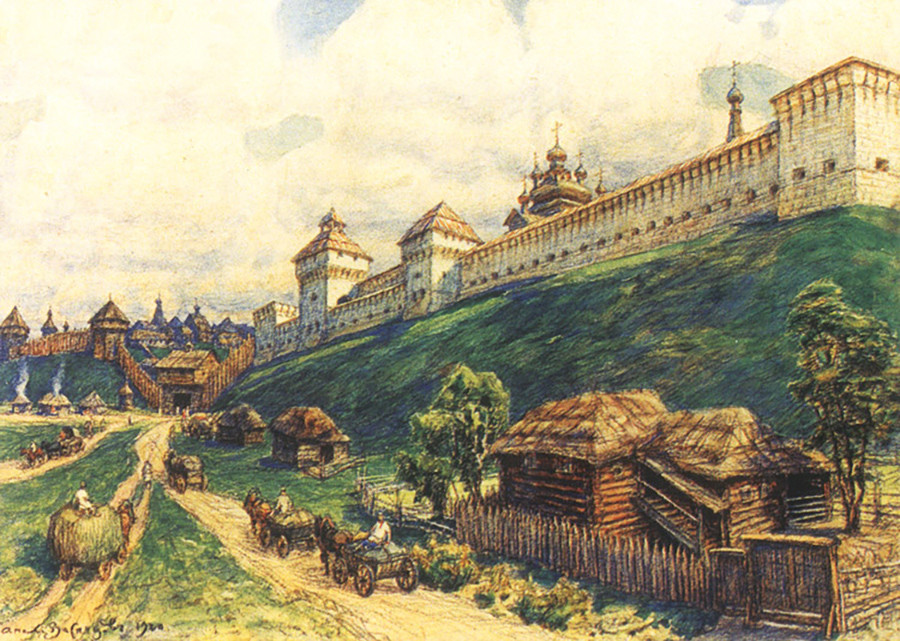 Many Russian cities used to have kremlins (citadels) - the present-day Moscow Region alone still has about a dozen - but many kremlins haven't survived to our time. Thus, just a few fragments of the fortress wall and foundations remain of the Serpukhov kremlin built in the 14th century. 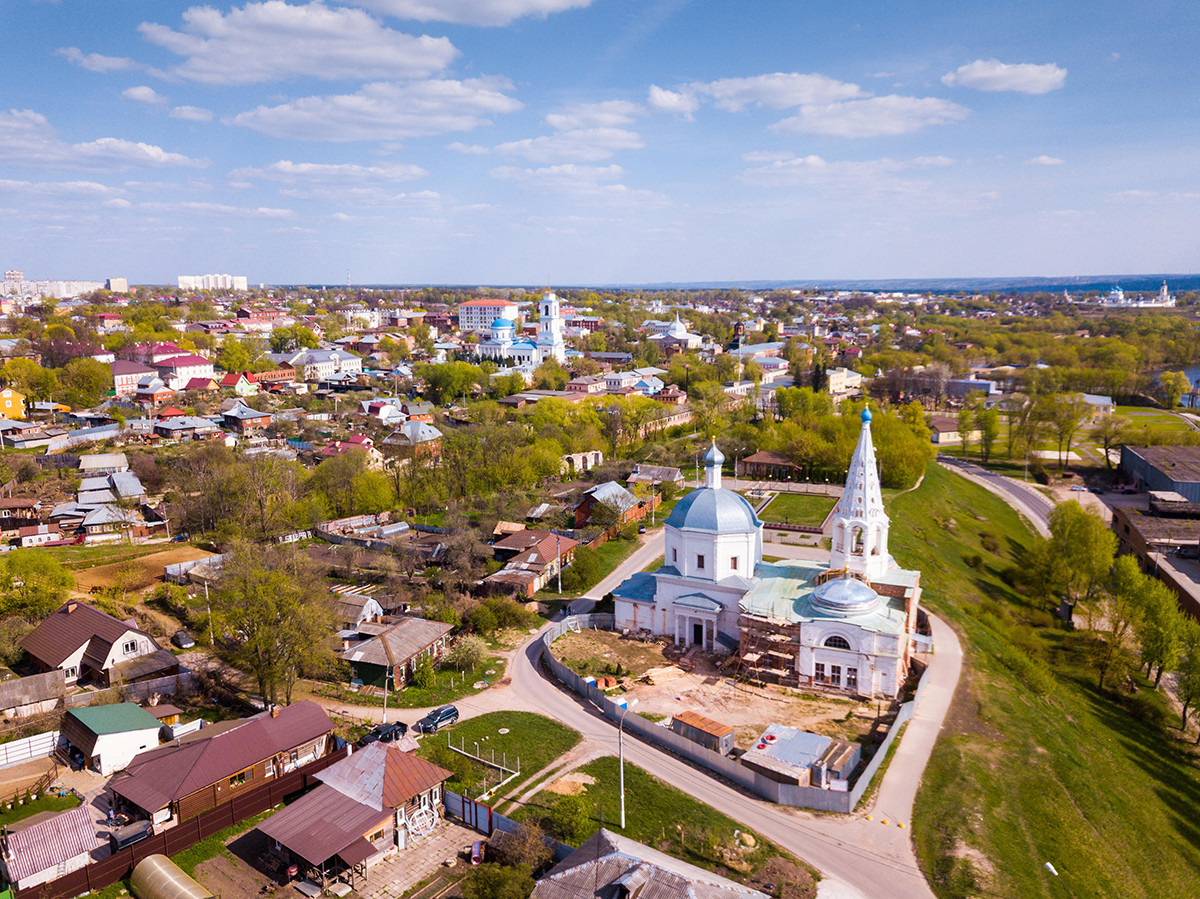 It was put up as an important defensive structure in the path of the Tatar-Mongols towards Moscow. In the middle of the 18th century, however, Serpukhov completely lost its military significance and the wall began to be dismantled, and, in the 1930s, what was left was used as building material for the Moscow Metro. Today the high hill on which the Serpukhov Kremin once stood is called Sobornaya Gora (Cathedral Hill). 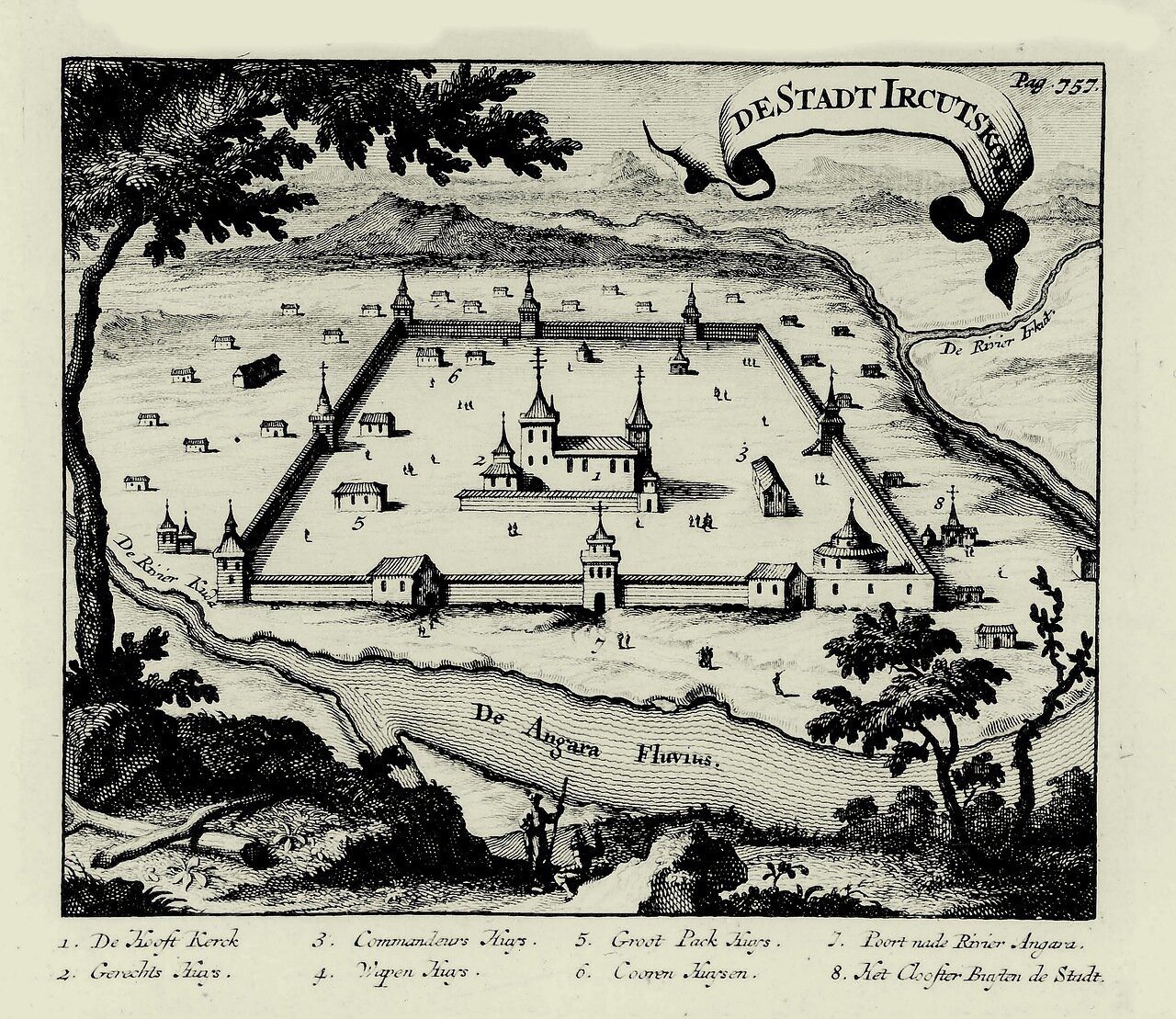 It would have been the easternmost kremlin in Russia had it survived to this day. But only one kremlin still stands in Siberia - in Tobolsk. A wooden fort was built on the Irkutsk site during Russia's conquest of Eastern Siberia and Irkutsk in the 17th century and later a kremlin was erected in its place. 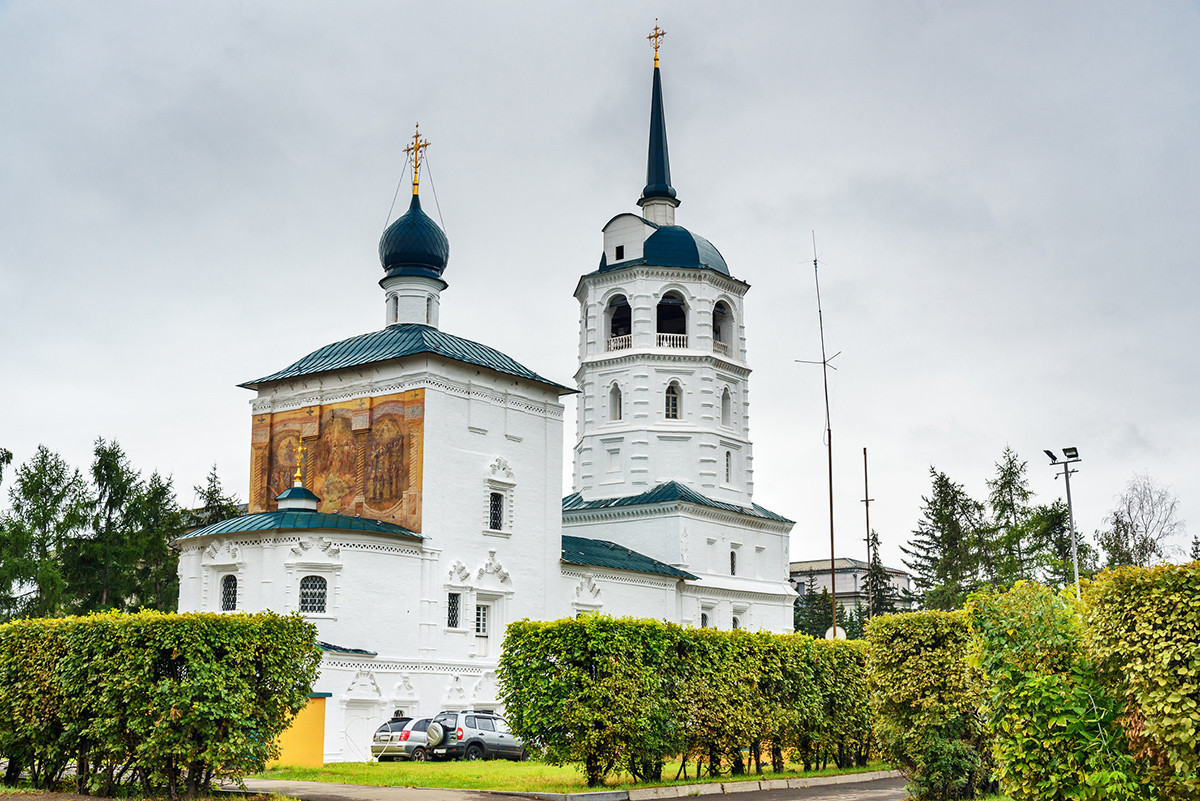 The Church of the Savior in Irkutsk

Throughout its history, it never once defended itself against anyone and, when Russia's borders expanded, the fortress completely lost its raison d'être; moreover, a major fire badly damaged its walls. A garden was laid out on the site of the former kremlin in the 19th century and the only reminder of it that still stands is the Church of the Savior, one of the city's oldest stone buildings. 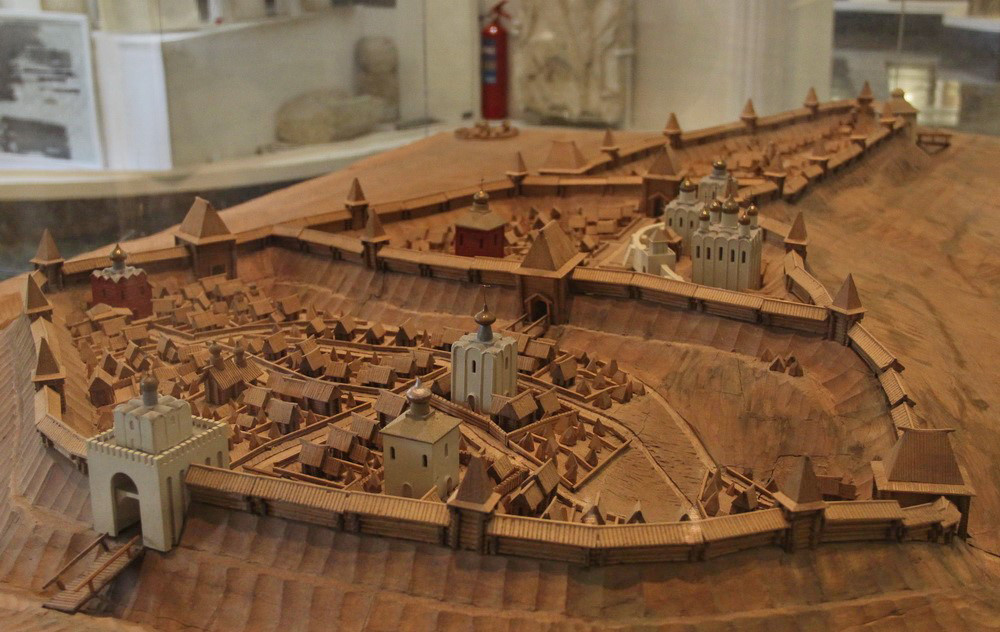 In the 12th-14th centuries, the city of Vladimir, 200 km (125 miles) from Moscow, was the capital of the most powerful Russian principality and aspired to become the capital of All Russia. A formidable fortification system with earth ramparts and several levels of fortified walls was built here in the 12th century. The wall was badly damaged during the Tatar-Mongol assault on the city in the 13th century. Later it was rebuilt but, as Moscow grew stronger, Vladimir lost its significance and gradually declined, while the wall crumbled and was eventually lost.

Some stone buildings dating back to the 12th century have survived to this day: the Cathedral of the Dormition and the Golden Gate of Vladimir. 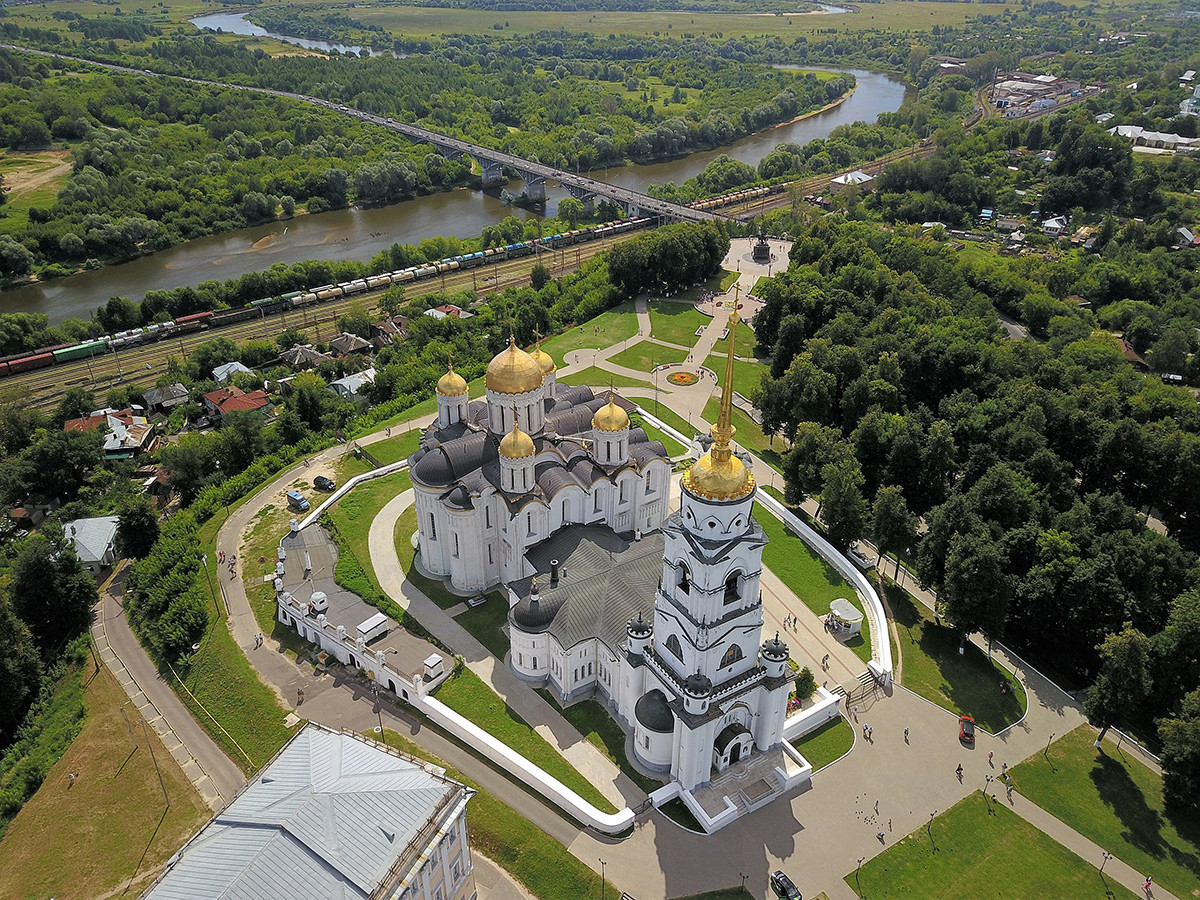 The Dormition Cathedral in Vladimir

According to legend, a carriage carrying Catherine II got stuck in a puddle when entering Vladimir via the Golden Gate in 1767; the angry Empress ordered the ancient earth ramparts to be levelled to make it possible to go round the gate. A fragment of one of the ramparts can be seen left in this photo. 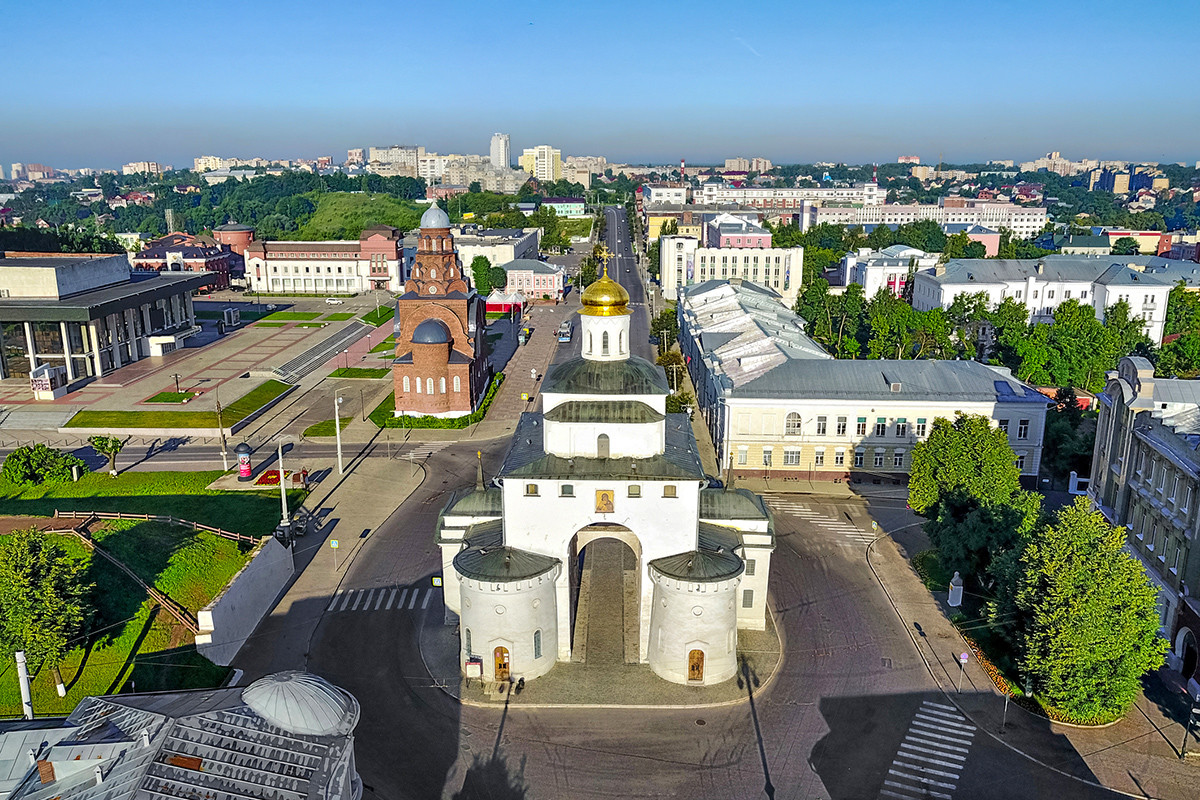 The Golden Gates in Vladimir 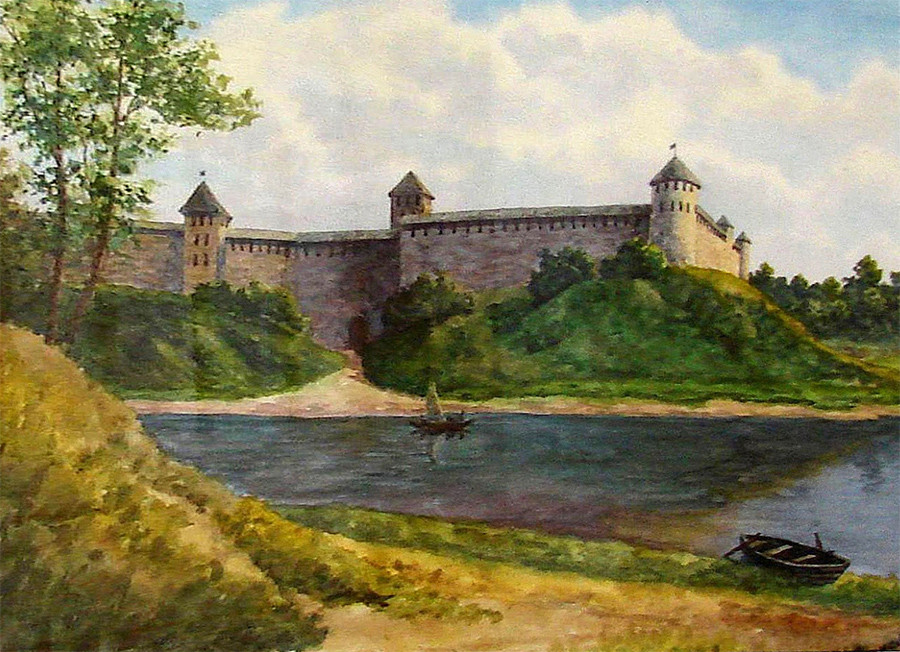 Today it is the town of Kingisepp in Leningrad Region, but in the 14th century the Novgorod Republic built a fort on the bank of the River Luga to protect the republic from the Livonian Order. Constructed in record time - 33 days - the Yam Fortress withstood all of its many sieges. 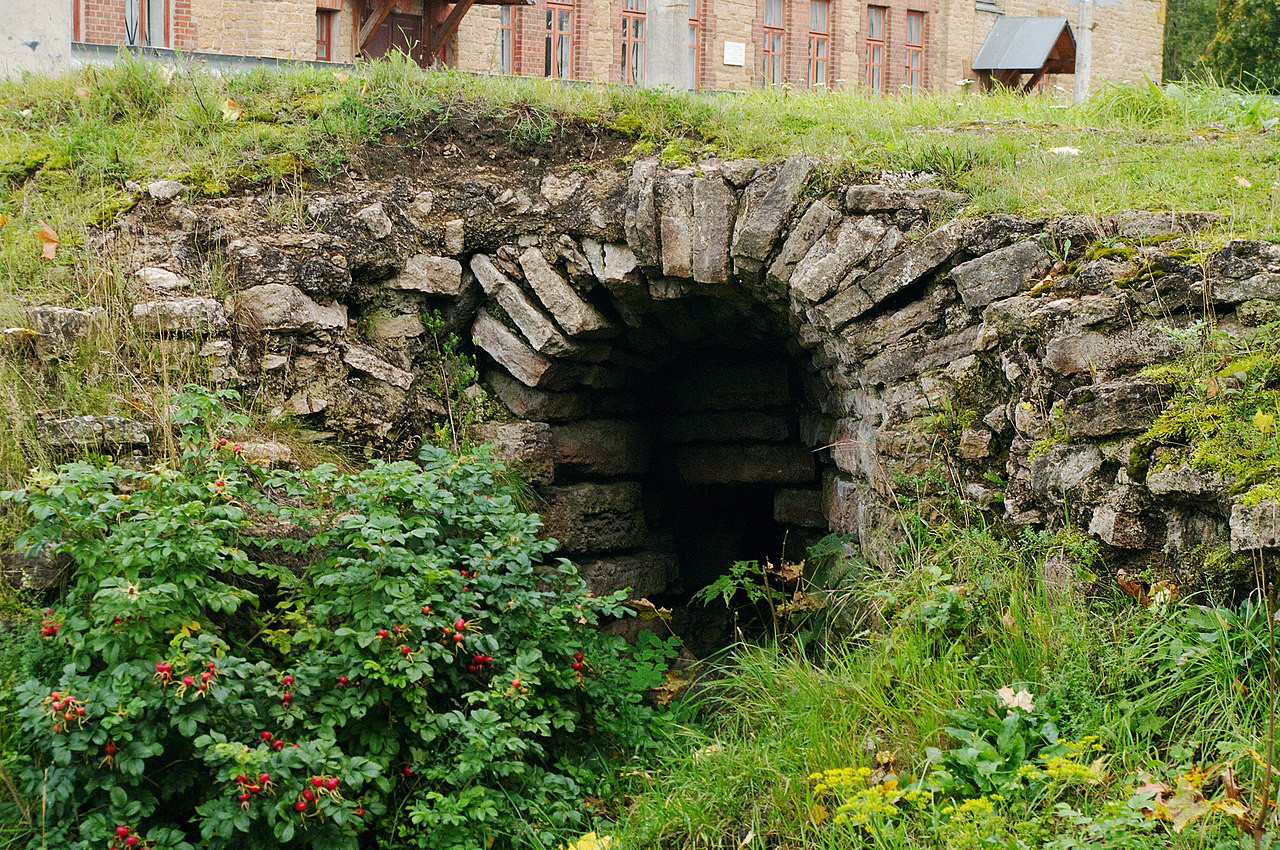 The remains of a tower 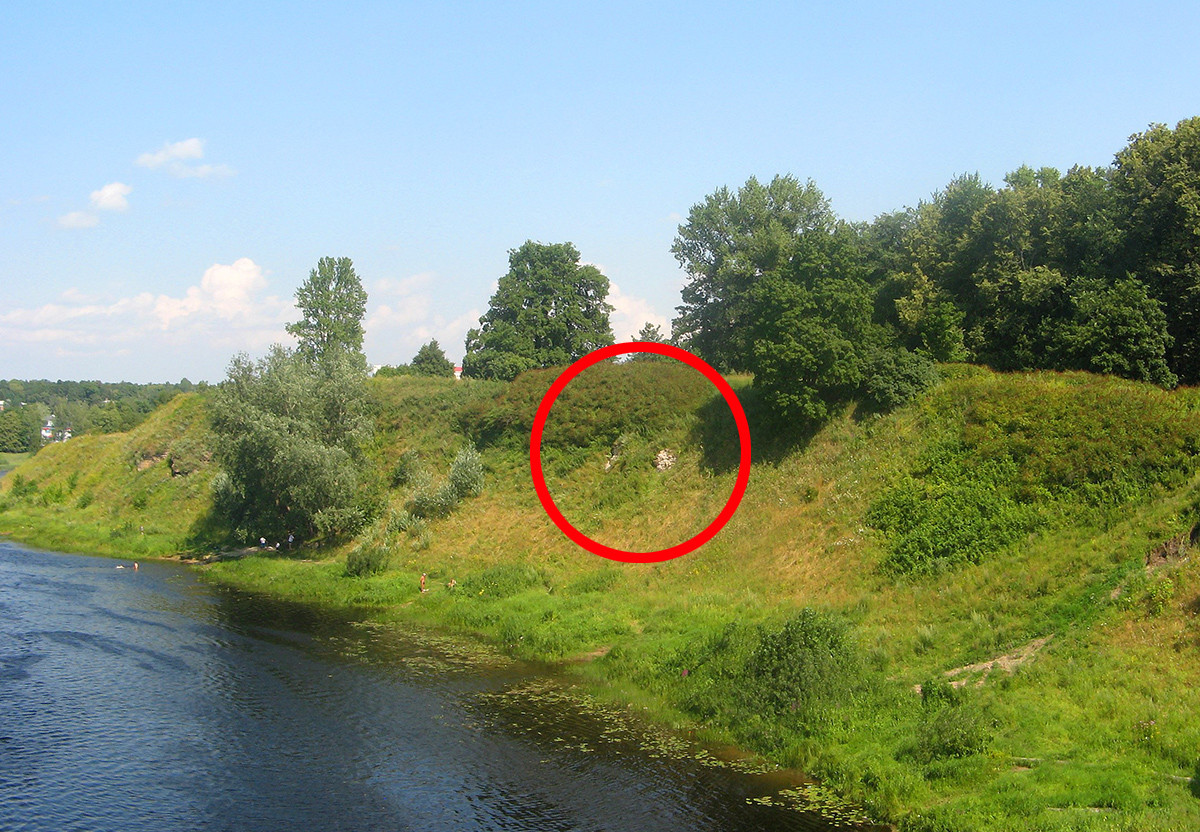 The remains of the wall

Nowadays there is a park where the fortress once stood, including a large archeological site with remnants of the walls built in different centuries. 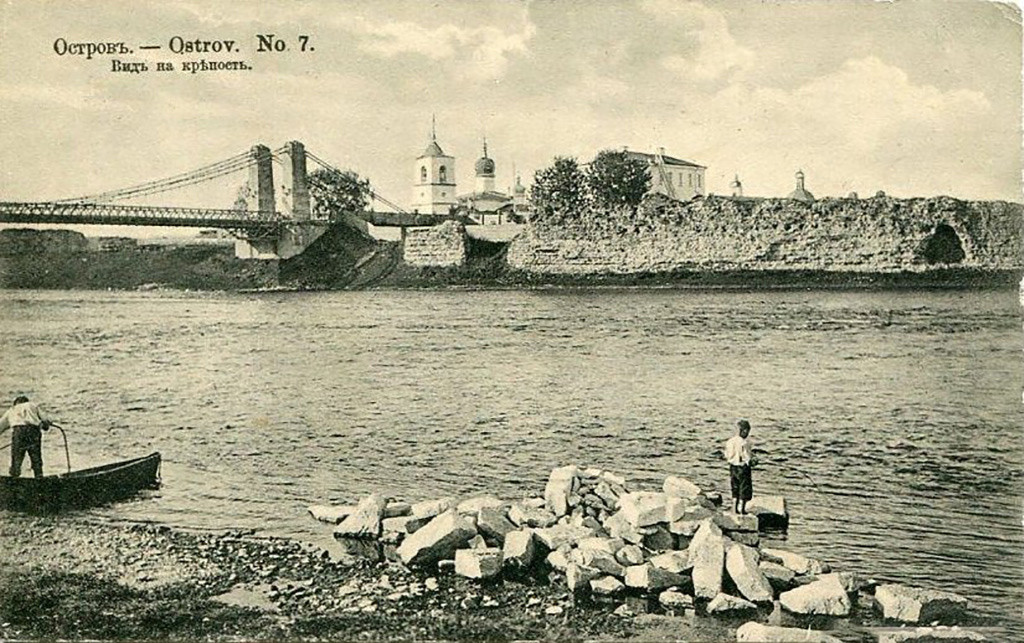 On the western border of Ancient Russia, in the Pskov Region, there were a large number of defensive forts built to defend against attacks by the Livonian Order. One of them - the Izborsk Fortress - withstood several sieges by the knights, but has survived to this day.

The fort in the town of Ostrov was less fortunate, however. It was badly damaged by the army of Polish King Stefan Batory at the end of the 16th century. After that the town fell into decay and there was no need to rebuild its fortifications. In  the 17th century the fortress almost completely fell into ruin. During World War II, Ostrov was occupied by the Nazis who destroyed what still remained of the old buildings. 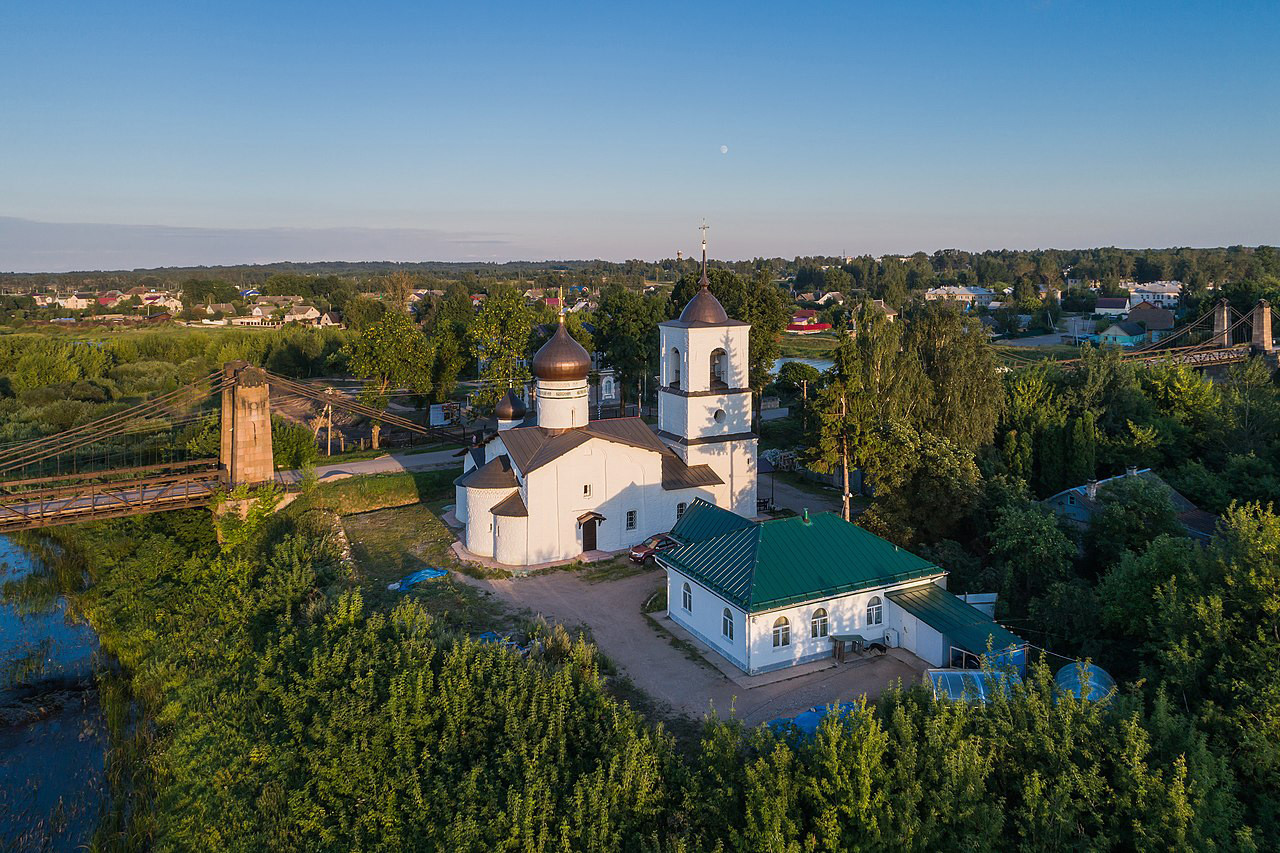 Nowadays only one stone church - the Church of St. Nicholas the Wonderworker (built in 1542) - is all that remains of the Ostrov Fortress.