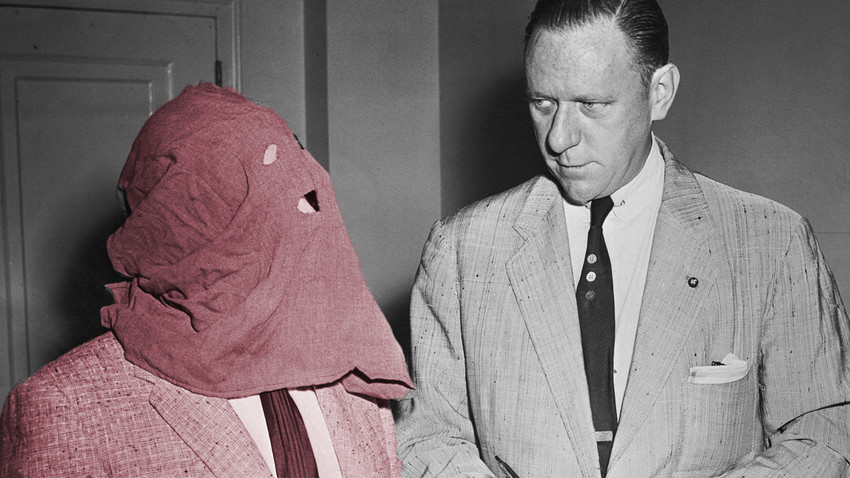 © Legion Media
The Gouzenko Affair led to arrests all over the world and triggered a wave of Red Scare in the U.S., Britain and Canada.

A man in an eerie white mask covering his entire face sits in a dark studio. His odd looks are broadcasted all over the U.S. so that every household with a TV set can watch and listen to what the man behind the mask has to say in English with a Russian accent.

“Do you believe that if you stopped appearing on television in a mask, if your face was exposed now on this program, that your life would be in danger?” asks the host.

The man behind the mask is Igor Gouzenko, a Soviet intelligence officer and a cipher expert who defected to Canada in 1945 and exposed the shocking extent of the Soviet spy network operating in the West. At the dawn of the Cold War, his revelations proved fatal for people on both sides of the Iron Curtain.

Before the Cold War divided the world in half, the U.S. and the USSR were allies who fought the Nazis hand in hand. Although, by the end of the war in 1945, politicians on both sides were cautious of each other’s motives and vision of the postwar order, the public perception of the Soviet Union in the West was comparatively favorable.

For many people in the U.S., it was impossible to imagine the USSR would soon become the main ideological enemy of the U.S. in the new war which was looming just around the corner.

Yet, politicians were not as optimistic about the prospects of lasting peace after the joint effort of the Allies defeated Nazi Germany. To gain an edge over the former allies, which would soon become its irreconcilable foes, the Soviet Union developed a complex spy network that was tasked with siphoning industrial-military secrets, especially research about the novel weapons of mass destruction.

Since the U.S. cooperated with Canada in many areas, the Soviets figured spying on the U.S. might be made easier with an additional intelligence network operating in Canada. Soon enough, Ottawa became one of the strategic bases where the Soviet Military Intelligence service, aka the GRU, operated.

In the summer of 1943, Moscow planted Lieutenant-Colonel Nikolai Zabotin in the Soviet Embassy in Ottawa under the cover of the Soviet military attache. He was charged with expanding the Soviet intelligence network in the West and replenishing the ranks of local informants spying on behalf of the USSR. Among the staff Zabotin brought with him from Moscow to Ottawa was Igor Gouzenko, a 28-year-old expert in cryptography, who was charged with the responsibilities of a cipher clerk under his boss. His job was to handle coded transmissions from Moscow to the Soviet Embassy in Ottawa and back. 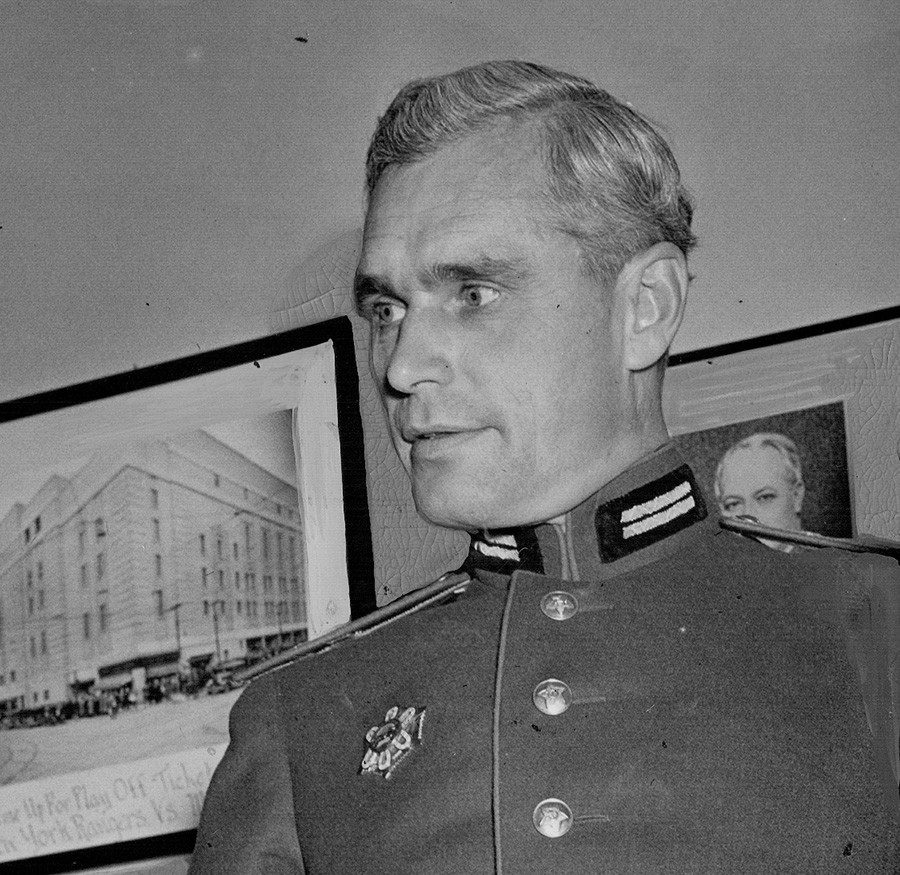 “He was a man of a phenomenal memory. One of my friends went to the training school of Military Intelligence. She was in the same class as he was. And she remembered him as somebody who never forgot anything, a name or anything. He just had an extraordinary memory,” says Jonathan Haslam, Professor of the History of International Relations at the University of Cambridge specializing in the history of the Soviet Union.

For a young man who had just moved to Canada with his pregnant wife, living in the Soviet Union, which was only recovering from the major war, contrasted sharply with life in the country that only witnessed the European tragedy from across the Atlantic. In addition, the memories of the Great Purge in the USSR — Joseph Stalin’s campaign of mass political repressions, arbitrary executions and widespread police surveillance inside the USSR — were only too fresh not to fear its reoccurrence. After all, Stalin was still alive and, with the war being over, nobody could have been certain the frenzy of mass repressions would not hit the country again.

Gouzenko’s fears for his life and that of his young family surfaced when he learned he was being recalled back to Moscow in early September 1944. Although his boss Nikolai Zabotin was able to delay his departure, arguing his deciphering skills were indispensable, suspicions tainted Gouzenko’s conscience.

Additionally, he believed the Western way of life was superior to the Soviet. “The unbelievable supplies of food, the restaurants, the movies, the wide open stores, the absolute freedom of the people combined to create the impression of a dream from which I must surely awaken,” he later wrote in his autobiographical book This Was My Choice.

Fortunately for Gouzenko, it did not take long for the perfect opportunity to present itself.

“Normally, the Russians were kept in what they called the ‘Colony’. They had a big building, it was guarded separately. They did not have free entry or exit on their own and their families were kept in the ‘Colony’, as well. And only very rarely was permission ever granted for a family to live outside the ‘Colony’. For obvious reasons; they could be got at by the West or, if they wanted to defect, they could defect without consequences,” says Haslam.

“In this case, the boss of Mr. Gouzenko, the military attache so-called, had a very disagreeable wife. And they lived next door to Gouzenko in the apartments, which had wafer-thin walls. And Gouzenko had a little baby and it did nothing but cry and cry and cry all night. Eventually, the attache’s wife said, ‘We’ve got to get him out of here,’” says the historian. 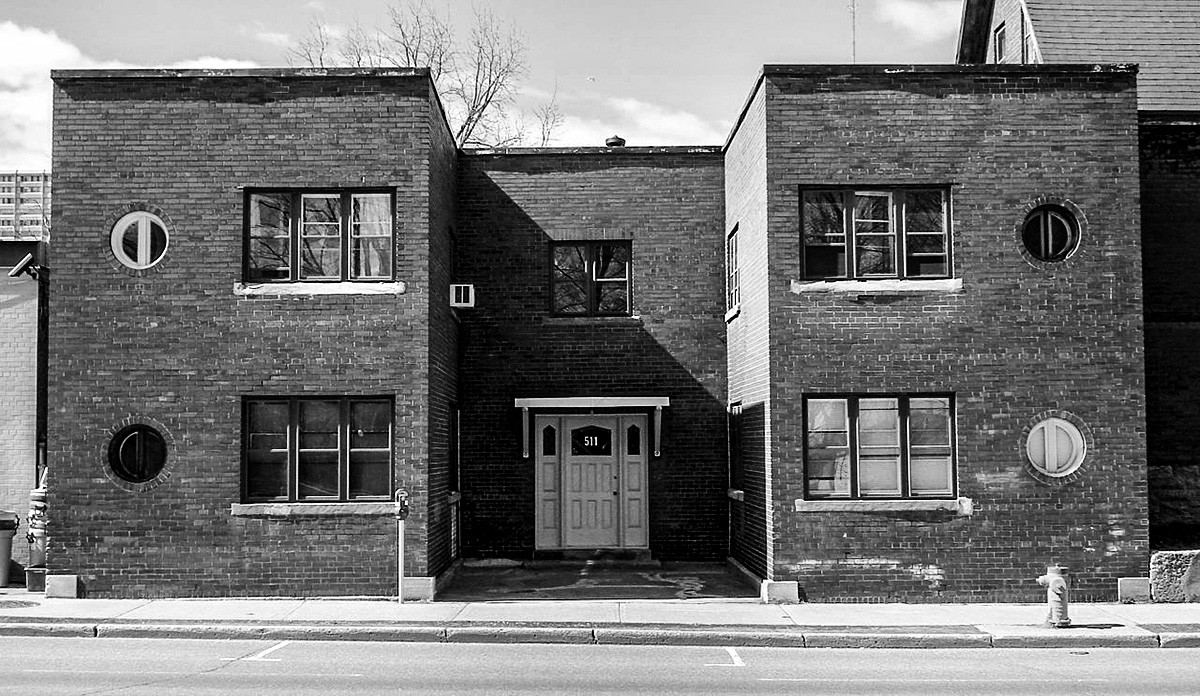 The apartment on Somerset Street in Ottawa, Canada inhabited by Soviet spy Igor Gouzenko in 1945.

The Gouzenkos were provided an apartment outside of the Soviet compound at 511 Somerset Street. For the disenchanted clerk who worried for his safety, this was once in a lifetime opportunity to defect and ensure that he and his family never had to return to the Soviet Union.

Gouzenko meticulously prepared for his defection. After all, he possessed invaluable information about the extent of the Soviet spy network in Canada and the U.S. Convinced the Canadian authorities would be instantly interested in his revelations, he began copying and stealing classified materials and smuggling them outside of the embassy by simply hiding them in his clothing. Surprisingly, he was never caught doing it.

On September 5, 1945, Gouzenko left the Soviet embassy for good. Fearing he could have been followed, Gouzenko was cautious about going straight to the Canadian authorities and instead chose to speak to reporters and headed to the Ottawa Journal editorial office.

“This man was short, with a tubby build and was as white as a sheet. He beckoned me to leave the desk. I gathered he wanted to talk to me in private somewhere, so I led him into what is called in the newspaper the ‘morgue’ on the other side of the main office. He backed against the wall. The first words he spoke were: ‘It’s war. It’s Russia.’ He said those words as if he had them prepared to frighten people. Well, that didn’t ring a bell with me, because we were not at war with Russia — World War II was over — and I didn’t get the connection,” recalled nighttime city editor Chester Fowde later. 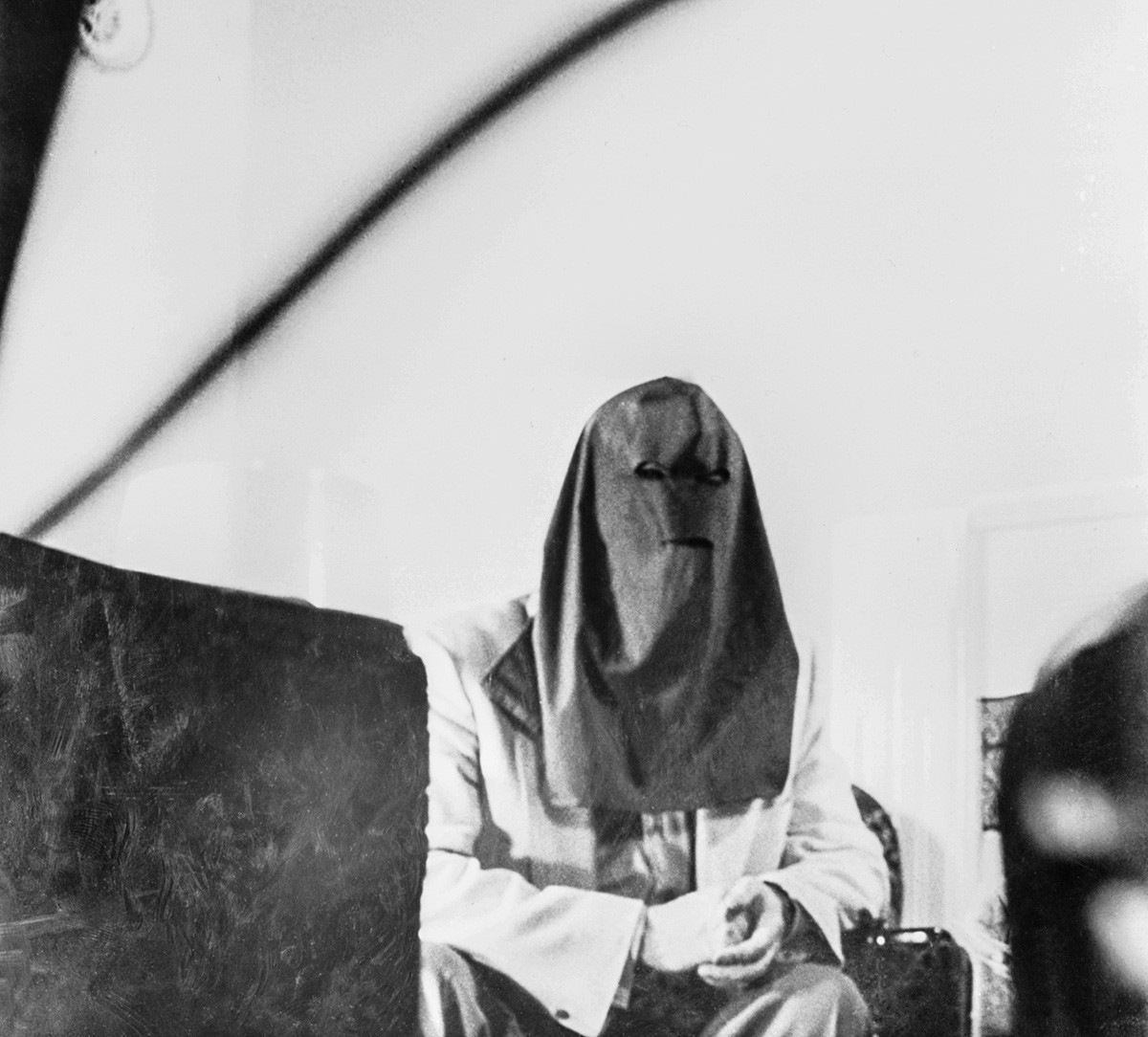 Igor Gouzenko, former decoding clerk in the Russian Embassy in Toronto who exposed a Red spy ring operation in Canada, is shown in the first photo ever permitted of him since he became a marked man...He is wearing a specifically designed hood to foil future identification.

The journalist did not take the story for its value and advised Gouzenko to try his luck with the police instead.

Accompanied by his wife, pregnant with their second child, Gouzenko jumped between various Canadian governmental agencies, such as the police, Ottawa Magistrate’s Court and the Ministry of Justice. Surprisingly, the authorities he managed to contact were more puzzled than interested. A Russian who could hardly make himself understood mumbling something about a Soviet spy ring in Canada and other Western states did not seem particularly trustworthy at the time when the USSR was largely perceived as an ally of the Western powers.

The defector had no other options but to return to his apartment, disenchanted, with his hopes of new life in Canada thinning rapidly. That night, the Soviet NKVD agents realized Gouzenko was playing a double game and raided his apartment. Hadn’t the family been quick to escape and hide at their Canadian neighbor, they would certainly have been arrested and deported to the USSR. 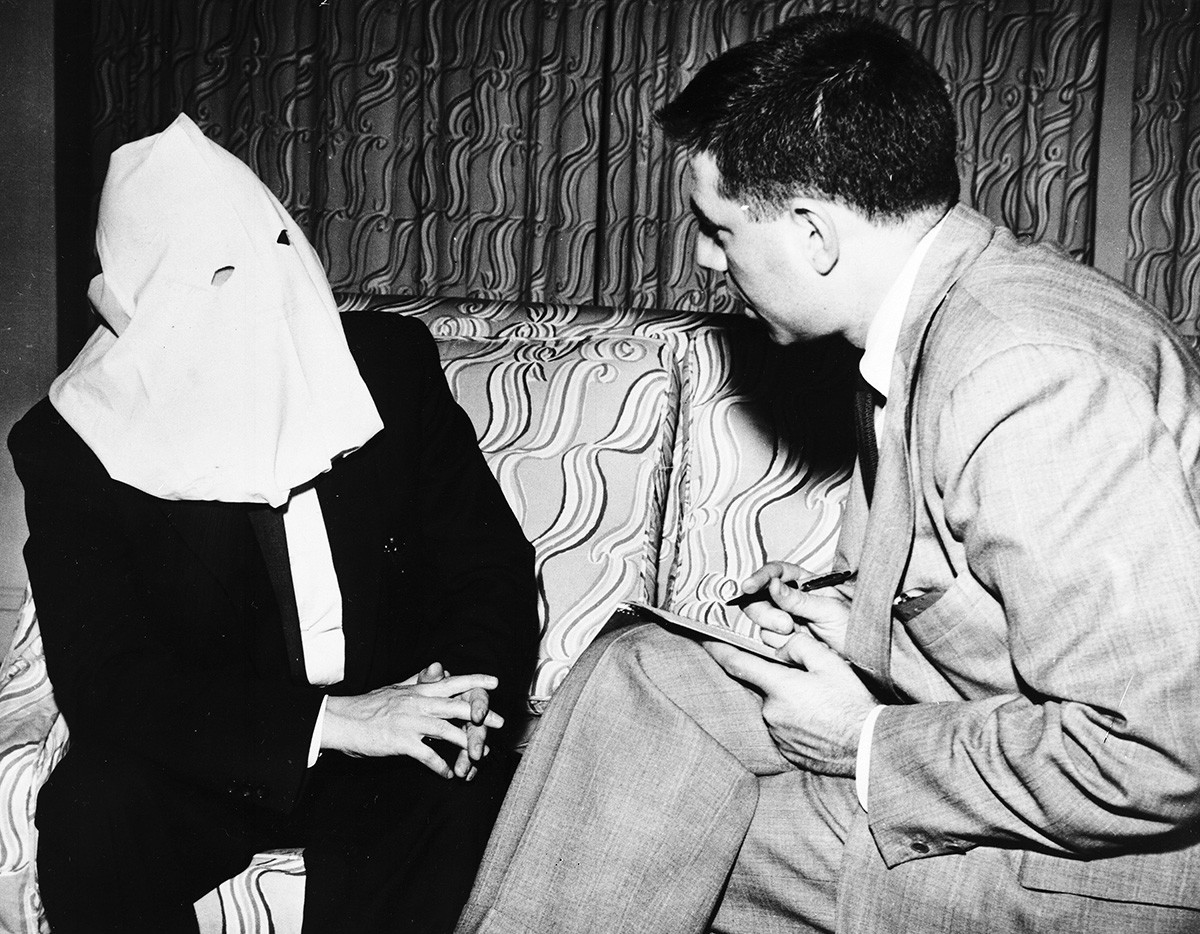 Igor Gouzenko, former Russian cypher clerk who revealed a Soviet spy ring in Canada in 1945, wears a hood to conceal his face, during a n interview with Associated Press writer Saul Pett, in Canada, on April 29, 1954.

Eventually, word about Gouzenko’s attempt to contact the Canadian Minister of Justice reached Canada’s Prime Minister William Lyon Mackenzie King. The raid of Gouzenko’s apartment convinced the Canadian government that there must be something to the man’s claims and the defector and his family were given protective custody, while the PM discussed the delicate matter with U.S. President Harry Truman and British PM Clement Atlee.

When the Canadian authorities refused to fulfill the Soviet embassy’s request to hand Gouzenko over, Soviet Ambassador Georgi Zarubin was seen to have “a very anxious look on his face”.

Yet, since eradicating the Soviet spy ring threatened to alienate the former ally and upend the precarious post-war security arrangement in Europe and the rest of the world, Gouzenko’s revelations were kept secret, save for a tight circle of high-ranking politicians. However, the story eventually leaked to renowned American journalist Drew Pearson, who in turn broke it to the Western audience on February 3, 1946.

The next day, the Canadian government launched a Royal Commission to officially investigate Gouzenko’s claims. In Canada, 39 people were arrested as a result. In the UK, nuclear physicists Alan Nunn May and Klaus Fuchs were convicted for spying for the USSR. In the U.S., Gouzenko’s revelations led to the arrest and eventual execution of Julius and Ethel Rosenberg, who became the first American civilians to be executed on charges of espionage during peacetime. 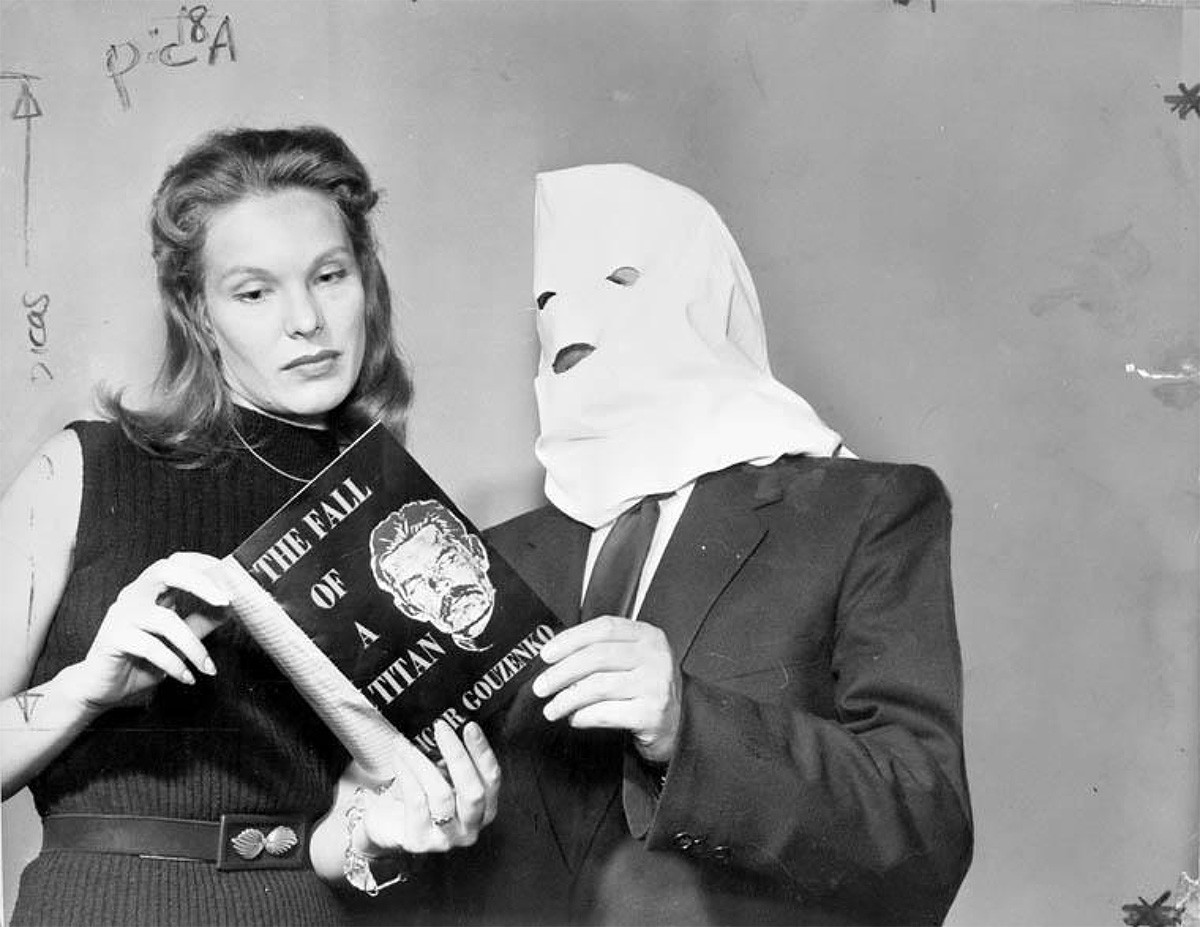 On the other side of the Iron Curtain, which was rapidly solidifying, Nikolai Zabotin — Gouzenko’s former boss at the embassy — was recalled to the USSR. He was made a scapegoat for Gouzenko's defection, arrested, along with his wife and his son, and sent to a labor camp. He was released in 1953, shortly after Stalin’s death.

In the years that followed the “Gouzenko Affair”, the public view of the Soviet Union in the West had flipped upside down. In the eyes of millions, the former ally had turned into a bitter enemy, which was believed to threaten the very existence of the “free world”. The Red Scare spread like wildfire, not least due to Gouzenko’s revelations.

The defector and his family were given Canadian citizenship and lived there under new identities. Fearing Soviet retaliation, Gouzenko never appeared on TV without his mask.

“Do you believe that if you stopped appearing on television in a mask, if your face was exposed now on this program, that your life would be in danger?” he was once asked by the host.

Despite his fears, however, Gouzenko died of natural causes in Ontario, on June 25, 1982.

Click here to read about Oleg Gordievsky, the notorious DOUBLE AGENT who worked for the KGB and MI6.