How German prisoners of war lived and died in the USSR 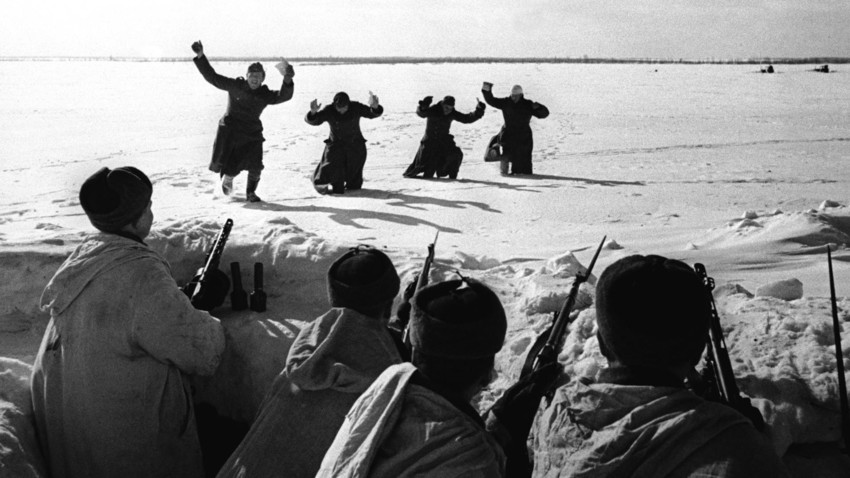 Vladimir Grebnev/TASS
Over four million Germans were imprisoned, captured and interned for labor in the USSR after WWII. Not all of them managed to find the road back home.

“If I do survive, I will be able to find out what the Bolsheviks are. Perhaps communism really is the ideal way out for the people. After all, we also do a lot of things wrong,” Helmut Bon thought as he was captured by Soviet soldiers somewhere in the Pskov region in February 1944. Bohn would spend 1944-1947 in the USSR as a military prisoner and later describe this in a book titled ‘At the Gates of Life’. Not all Germans interned in the USSR lived to write a book, however. 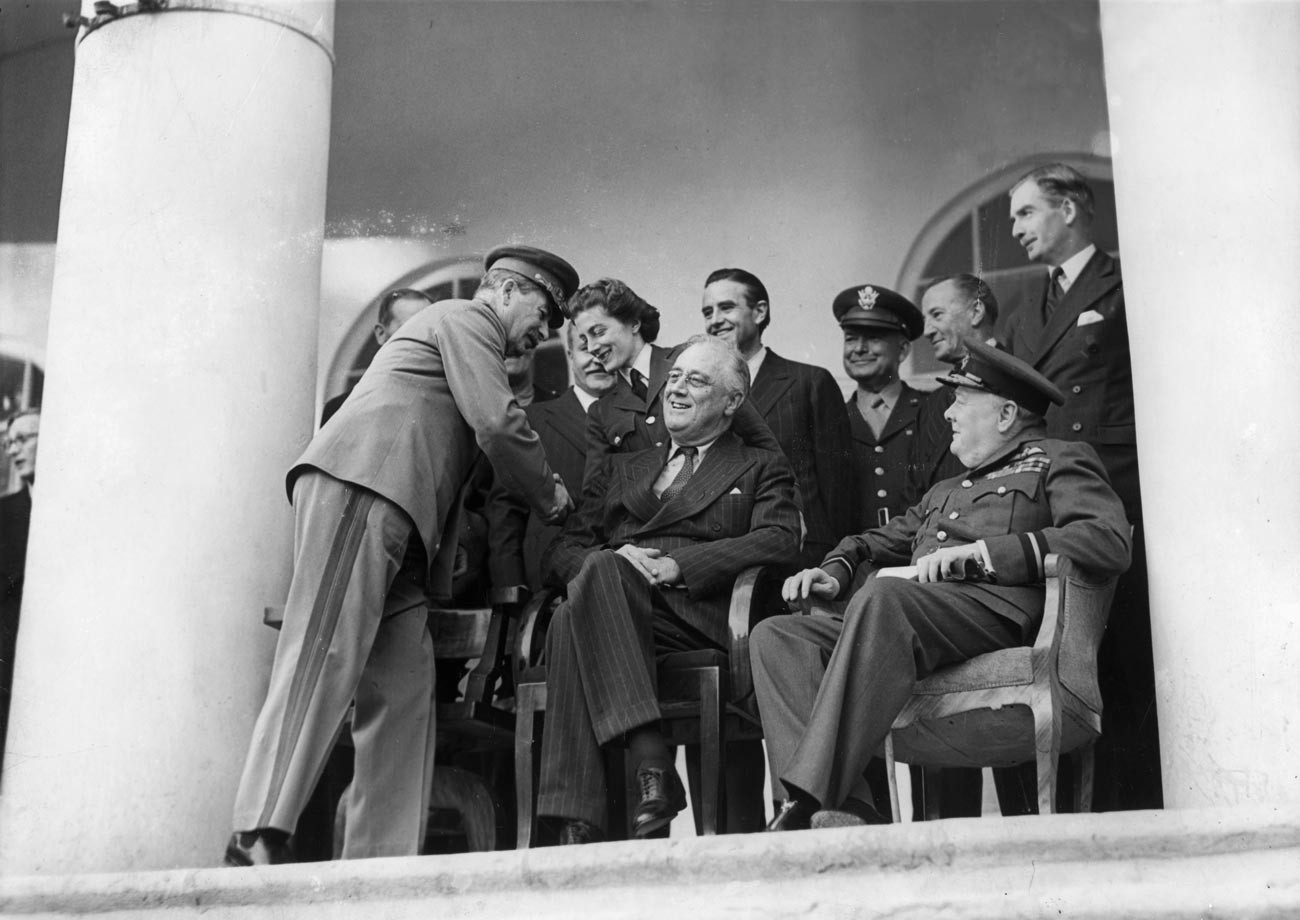 “Prisoners of war were regarded by the USSR not only as a source of labor, but also as a resource intended for use in the country’s economy not just during the war, but, most importantly – in the postwar period,” historian Vladimir Vsevolodov writes. Inhumanly enough, the Soviet authorities saw German war prisoners as means to compensate for Soviet population losses.

Stalin defined the number of prisoners USSR “needed” in 1943 at the Tehran Conference. Stalin argued that the USSR needed a “replacement element” – about four million German citizens, who would restore destroyed Soviet cities and raise industry. This number, historian Elena Shmaraeva notes, was derived from the approximate numbers of Soviet soldiers perished and lost without trace by the time the Tehran Conference was held – also about four million.

By 1944, the Soviets had devised a labor program for German war prisoners. “Withdrawal of several thousand working units from the German national economy every year must inevitably have a weakening effect on its economy and on its military potential,” foreign minister Vyacheslav Molotov wrote to Stalin. But, indeed, eventually during the war, over three million Soviet citizens were taken to Germany to serve in hard labor, so the USSR wanted to compensate for that – and also for the tens of millions of people who perished during the war. 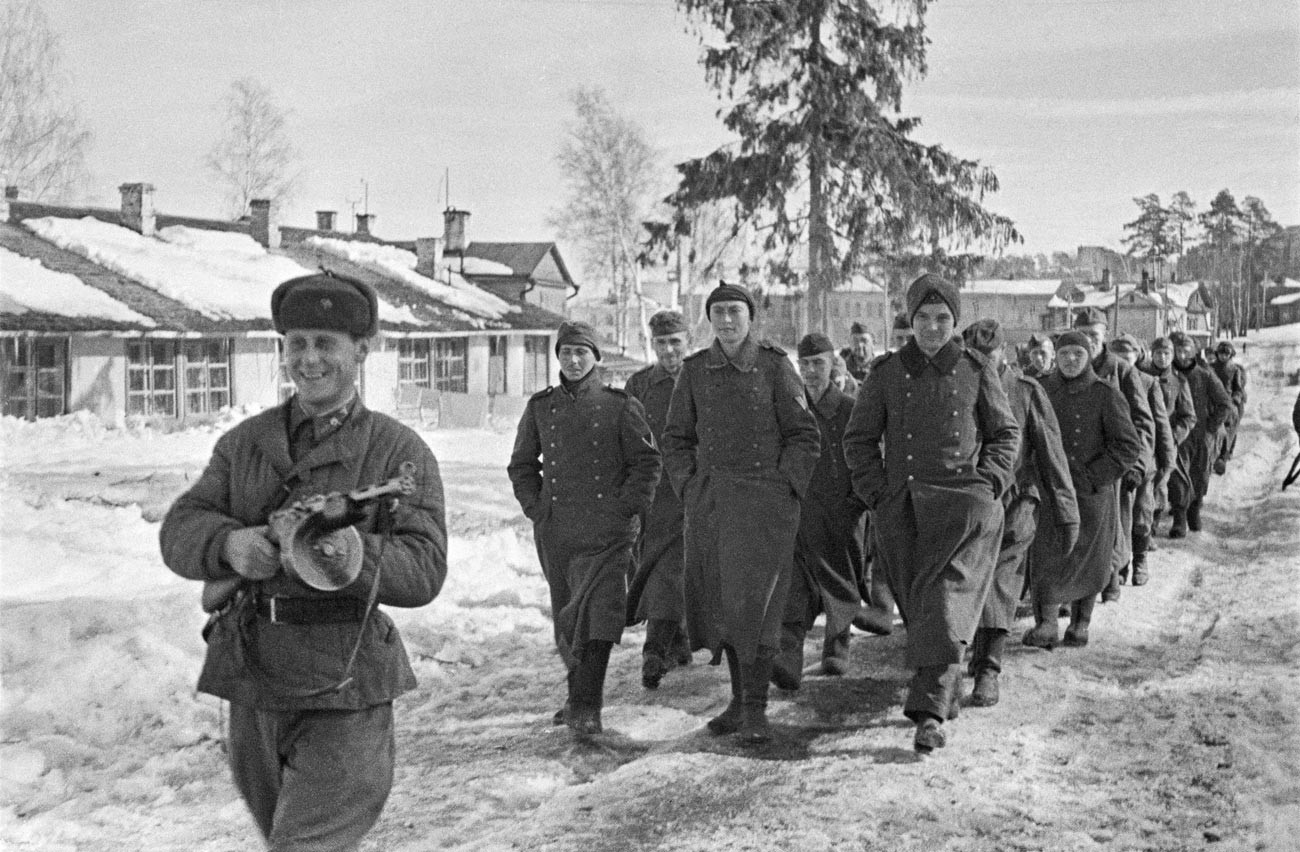 The Main Directorate for Prisoners of War and Internees was organized in the USSR even before the war started. By 1941, there were eight labor camps for war prisoners in the USSR, but the number of prisoners grew slowly: about ten thousand in 1941 and 1942. But, after the Stalingrad battle and the Soviet onslaught in the Don region, the number of prisoners grew quickly: over 200 thousand in 1943, and over 800 thousand more by the end of the war.

Formally, a German prisoner’s route was as follows: From the place they were captured at, they were taken to the front line receiving and forwarding camps and, from there, transported to the mainland camps. But, in reality, during the war, most prisoners stayed at the front line camps that often were just huts and dugouts. “Until we arrive at the camp, the daily ration is about a liter of liquid soup and three hundred grams of stale bread. Those days when we were ordered to chop wood for the Russian field kitchen, we were given some hot tea for dinner. We, about a dozen prisoners, were kept under lock and key in a goat pen, overseen by a junior female Red Army lieutenant,” Helmut Bon wrote. 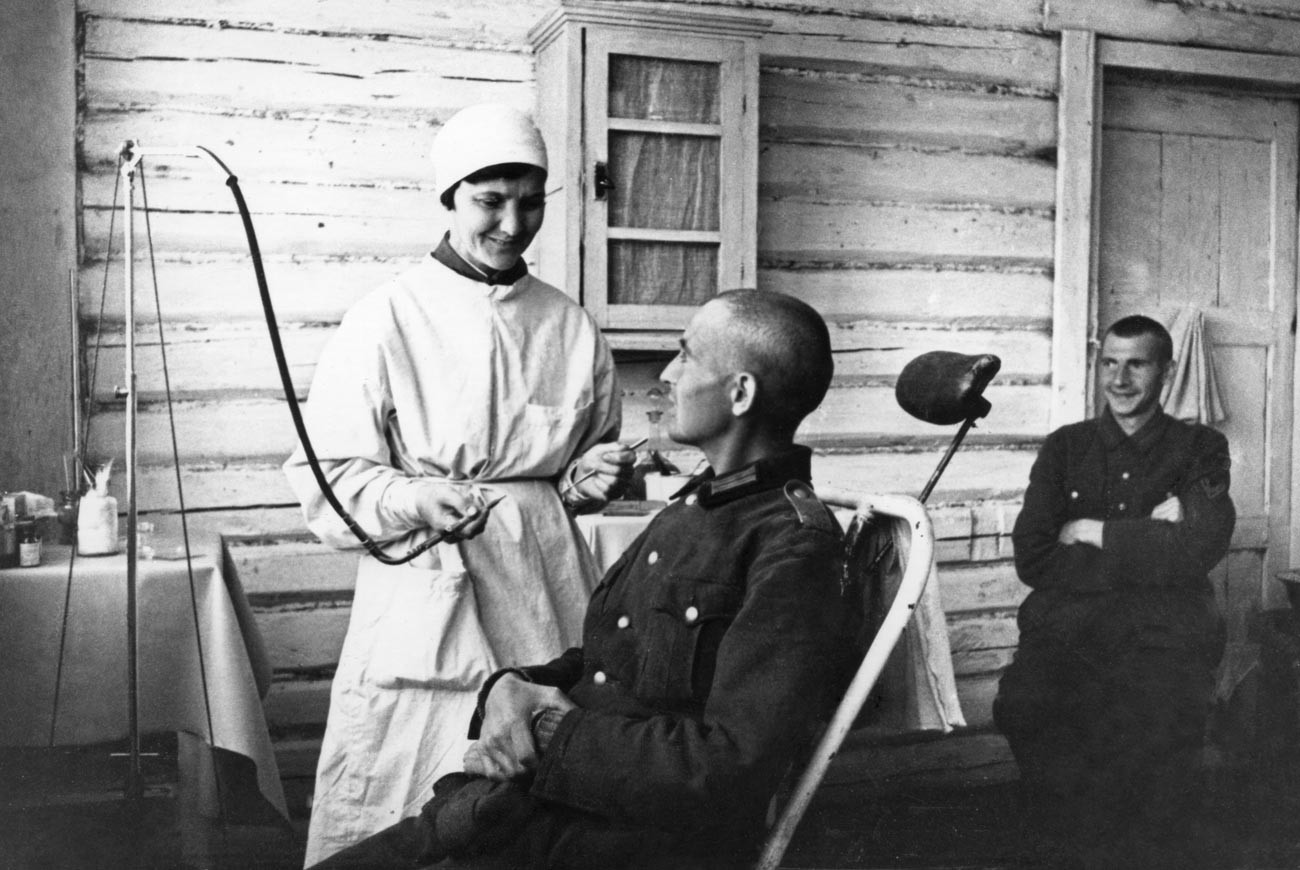 A propaganda still from Soviet POW camp, 1943. An appointment in the dental office of camp No. 165. Doctor S.A.Bunimovich, the patient is German non-commissioned officer Stefan Schulte.

By 1946, there were 240 labor camps for prisoners of war of different nationalities in the USSR that held over a million prisoners. However, this wasn’t enough to fill in the desirable four-million goal, so the USSR started interning prisoners from abroad.

In 1944, after the entry of the Red Army into the territories of Romania, Yugoslavia, Hungary, Bulgaria and Czechoslovakia, an order was issued by the Soviet War Ministry “to mobilize and intern all Germans living on the territory of these countries, men from 17 to 45 years, women from 18 to 30 years, regardless of their citizenship.” Historian Pavel Polyan writes that over 112 thousand people were interned from these countries to work in the USSR. The mobilized persons were allowed to take up to 200 kilograms of personal belongings with them.

READ MORE: How German soldiers marched through Moscow during WWII

After the war, Elena Shmaraeva writes, up to 3.8 million German war prisoners were interned in the USSR. About 2.4 million were soldiers and officers, who were held in POW camps, while the rest – mostly ethnic Germans interned from European countries – were assigned to “working battalions”. What did they do? 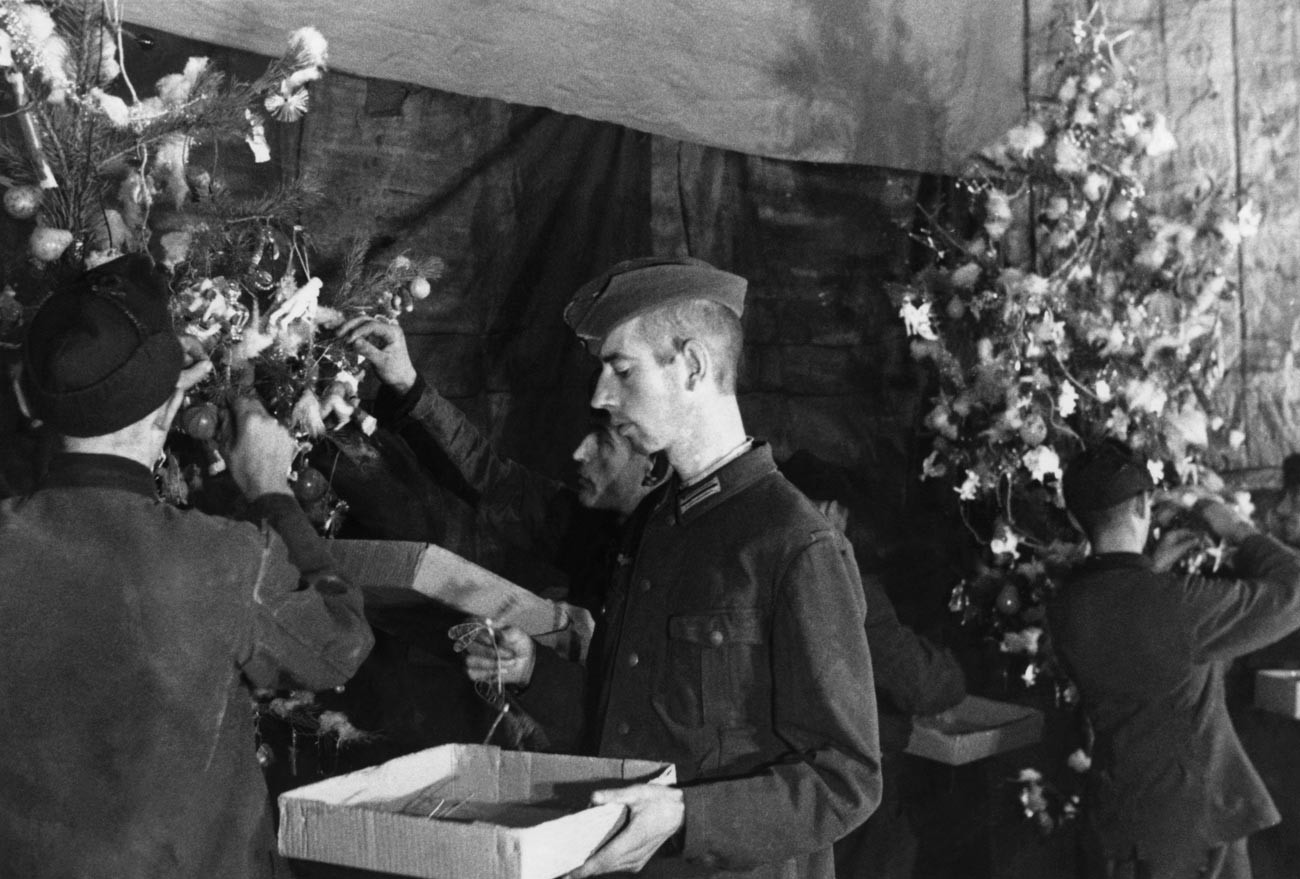 A propaganda shot from a Soviet POW camp, 1944. Captured German soldiers decorate the Christmas tree in the camp club.

Prisoners of war rebuilt factories, constructed dams, railways, ports and so on. They also built and restored houses, including apartment houses for workers of the Interior Ministry. For instance, German prisoners built the ‘Dinamo’ stadium in Moscow. They also worked in a glass mill in Lytkarino, a Moscow suburb. An archive building in Krasnogorsk, Moscow Region, was constructed following the project by Paul Spiegel, a German architect.

Qualified specialists like Spiegel were selected by the Soviets to perform complicated tasks. Historian Stefan Karner writes that by 1946, over 1,600 high-profile specialists were assigned to different Soviet industries: “Five hundred and seventy engineers, 260 civil engineers and architects, about 220 electrical engineers, over 110 doctors of physical and mathematical sciences and technical sciences.” These people enjoyed better conditions than in the labor camps or “working battalions”. They lived in the cities, near the industries or institutions they were working at, and were paid salaries, half of which came in Deutsche marks. However, any specialist could be taken back to a camp if his work didn’t satisfy the authorities. 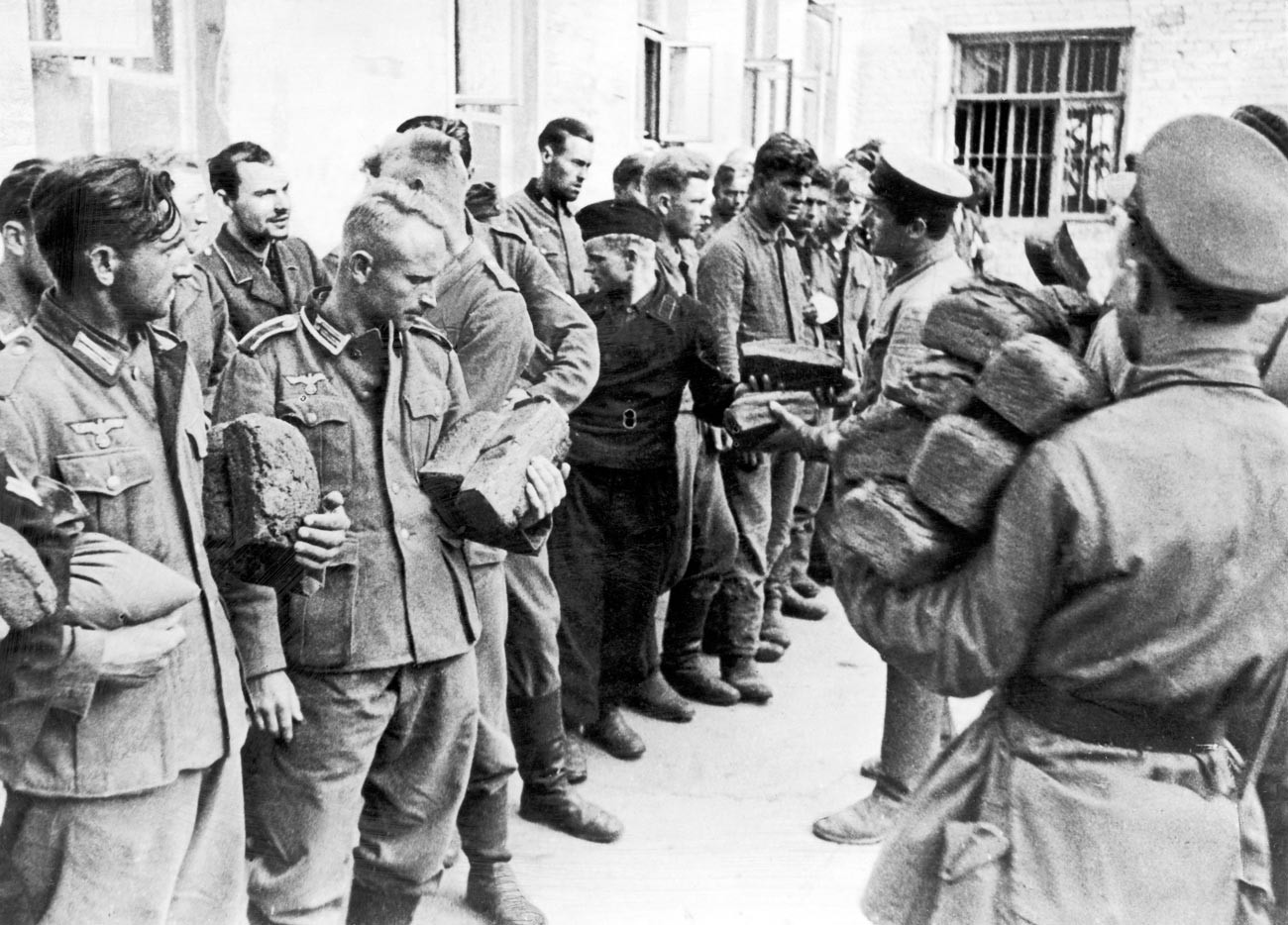 German prisoners of war captured by Russian forces are fed bread by the Russian soldiers during the Second World War. 9th August 1941.

Ordinary German workers and former soldiers, who worked at construction sites and elsewhere, also received salaries, so that they could support themselves in the Soviet Union. For example, former privates were paid seven Soviet rubles a month, former senior officers – from 10 to 30 rubles. These numbers were tiny – a jug of milk cost two rubles and a pair of good shoes was over 150 rubles, so ordinary POWs, who didn’t possess any special skills, really had to find ways to survive.

Working conditions in the camps were, of course, dire. “At first, we had to load two train cars with wood during one work shift, then the norm was increased to three cars. We were forced to work sixteen hours a day, on Sundays and holidays, also. We returned to the camp at nine or ten o'clock in the evening, but often at midnight. We received watery soup and fell asleep, so that the next day at five in the morning we would go to work again,” Elena Shmaraeva quotes Reinchold Braun, a German POW.

“The stomach problem was above all,” officer Heinrich Eichenberg wrote. “Soul and body were sold for a plate of soup or a piece of bread. Hunger spoiled people, corrupted them and turned them into animals. The theft of products from their own comrades has become common.”

Captured Germans were used in logging, construction of roads and railways in remote and hard-to-reach areas, as well as in the extraction of minerals — for example, uranium, coal, iron ore, especially in the mines of the Don river basin.

Death rates were high among the Germans in the labor camps. According to Soviet statistics, from 1945 to 1956, over 580,000 people died in prison camps, over 356,000 of them Germans. Almost 70% of deaths occurred in the winter of 1945-1946. In comparison, as historian Viktor Zemskov wrote, about 1.8 million Soviet citizens died in German captivity during the years of war.

The way back home 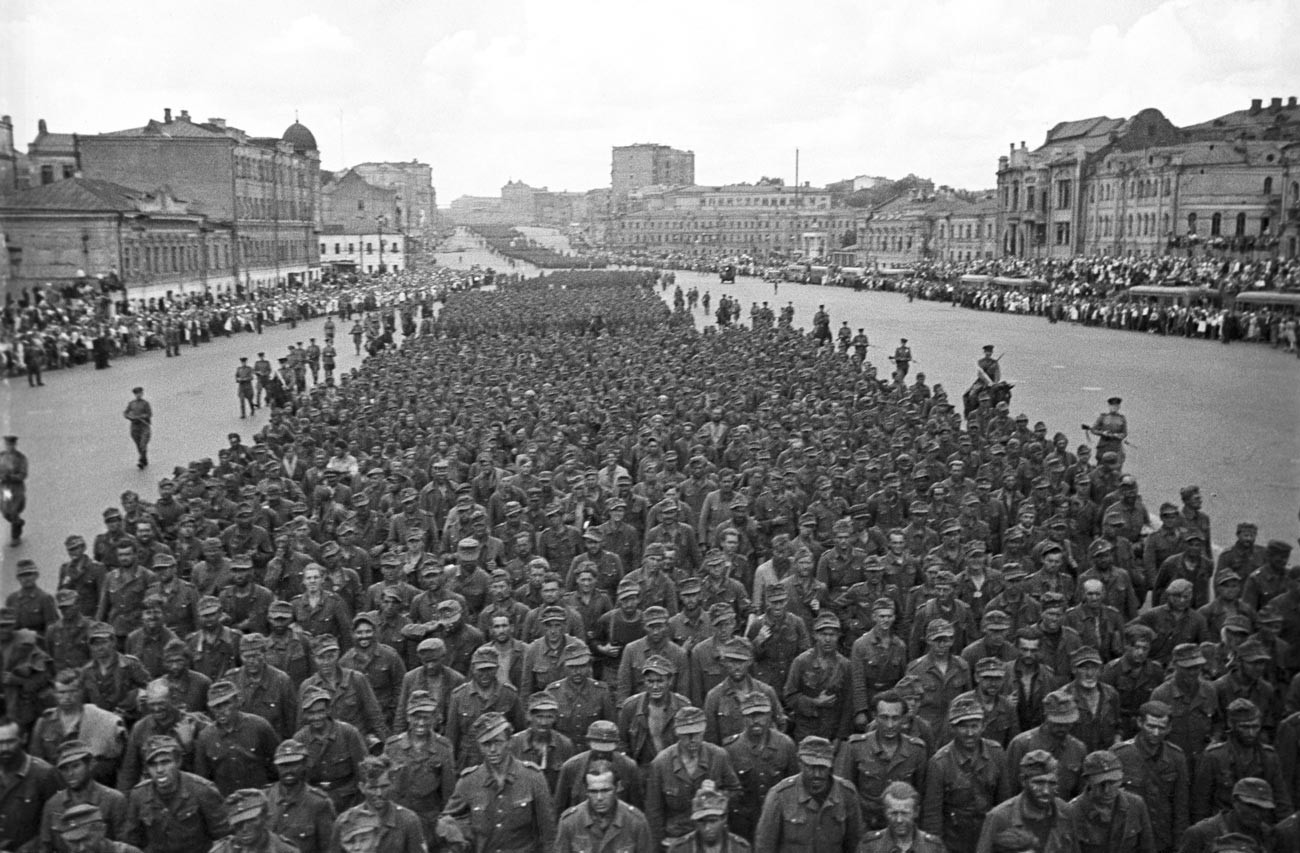 The official Soviet statistics from 1956 says two million German prisoners were repatriated after WWII ended. However, with such vast numbers, statistics lack certainty. Other sources say up to 680,000 prisoners were released during the war, but that number included prisoners from Romania, Slovakia, Hungary, etc. Soviet stats say 356,678 prisoners died in the Soviet camps and about 37 000 of them were condemned for war crimes.

In fact, the repatriation started as early as June 1945, when the first 225,000 “ill and weakened” prisoners were sent home, 195,000 Germans among them. In August 1945, 700,000 more, 412,000 of them Germans, were “discharged” from Soviet captivity. They were not allowed to carry money with them, Elena Shmaraeva writes, so the repatriated tried to buy sweets, tobacco with their saved salaries – anything they could trade en route home. Wilhelm Lotse, repatriated in 1949, carried with him almost 6 kg of cookies and sweets, 2,355 cigarettes and 600 grams of tobacco. 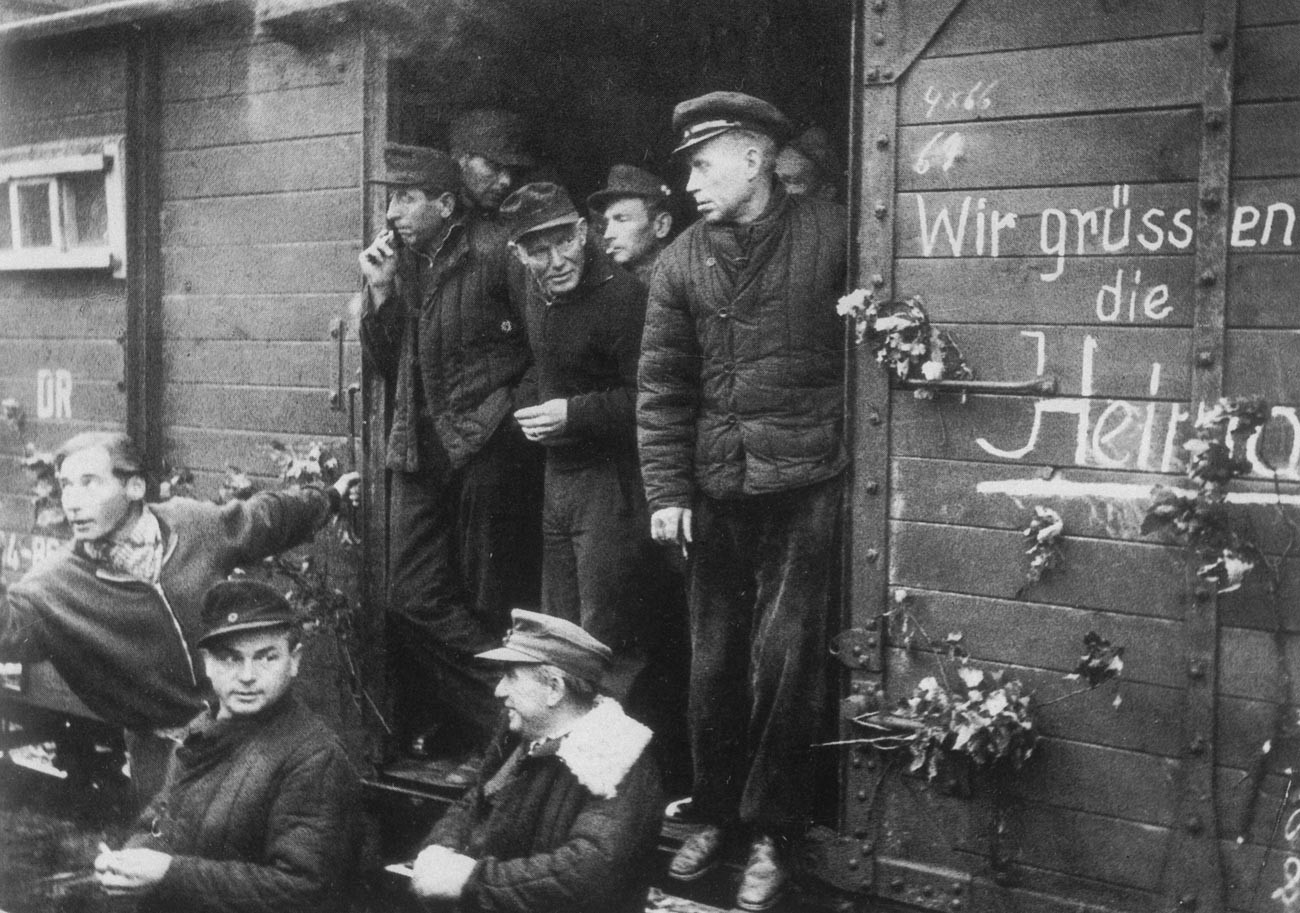 Germans returning from Soviet captivity arrived at the Friedland border transit camp in 1955. From the photo catalog of the exhibition "Germany's War against the Soviet Union".

The transportation conditions were labor-camp like – the last farewell of the Soviet repressive system. Sometimes, repatriated people didn’t receive food and water for days while moving in train echelons from the Russian mainland. The first place German prisoners got to in Europe was the Soviet relocation camp in Frankfurt (Oder), where they would spend 2-3 days, before being sent to their respective locations. As of 1947, 70% of the prisoners in this camp were ill.

The repatriation of German war prisoners from the USSR officially ended on May 5, 1950. TASS stated that 1,939,063 German prisoners of war had been repatriated since 1945. But, in reality, there were more captured Germans left in the USSR – somewhere between 10 and 20 thousand, who left in 1950-1956. “This house was built by German war prisoners” – Russians still say with respect about 1950s buildings, some of them really built by Germans. Even in captivity, German workers still did their best.