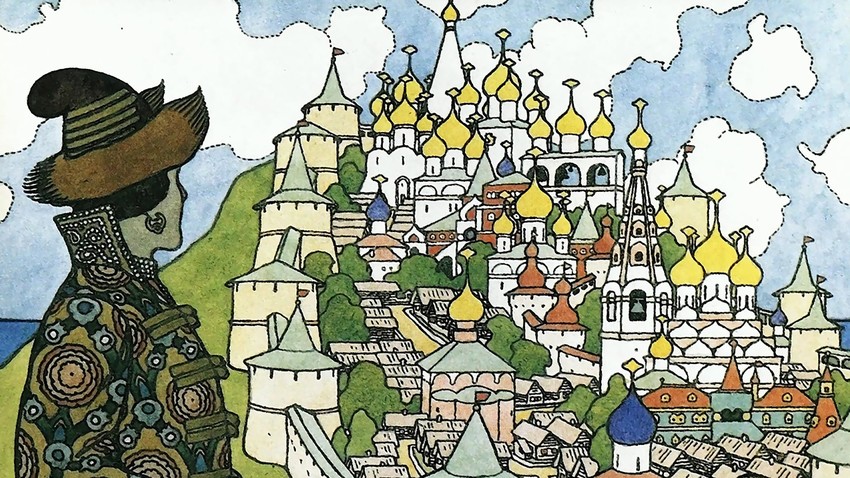 Ivan Bilibin
Cross a burning stream, fight a dragon, find the city of Russian Atlantis – Slavs had it all in their ancient mythology. Now, all we have left are the names of the sacred places. 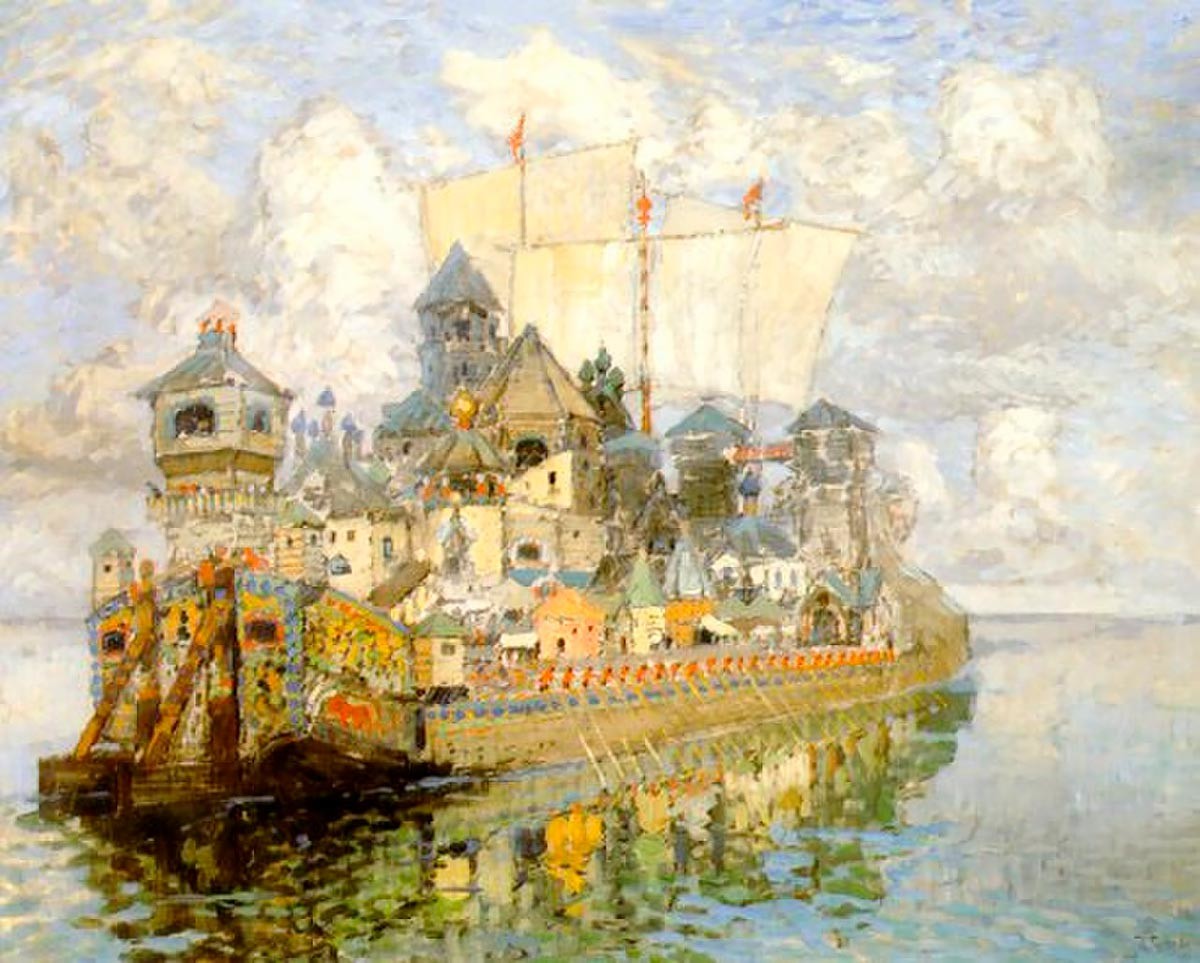 "The Town of Kitezh," 1913, by Konstantin Gorbatov

This sacred town can’t be seen by humans. Only in calm weather, one with a pure soul and mind can hear bells ringing and people singing, from under the waters of lake Svetloyar in the Nizhny Novgorod region.

The legend of Kitezh has it that this town was built by Saint Prince Yuri (Georgy) II of Vladimir in the 12th century. “With white-stone walls, golden-domed churches, holy monasteries, princely patterned terems (the separate quarters for noble women), boyar stone chambers, and houses cut from ancient non-rotting pines,” Pavel Melnikov-Pechersky, Russian 19th-century writer, described the legendary town of Kitezh.

When Batu Khan attacked Russian lands, the tale continues, he was going to take Kitezh, “burn the town, kill and enslave its men, and take their wives and daughters as concubines.” When Batu’s army reached Kitezh, it didn’t have any defenses – not even city walls. But its citizens were praying wholeheartedly, and the waters of the lake rose, hiding Kitezh from the enemy and the world in general. From then on, only the wholeheartedly believing Christians are able to see the city’s reflection in the waters of Svetloyar, the lake that also was dubbed “the Russian Atlantis” because of the legend.

This legend is not very old – it was probably created around the 17th century by Old Believers. They came to Svetloyar from different regions, fleeing from the persecutions the new authorities in the Russian Orthodox church inflicted upon them. At Svetloyar, local village people used to have pagan celebrations that the Old Believers considered sinful and unholy. So they created the solemn legend of the holy town of Kitezh resting under the waters of the lake to prevent locals from celebrating their pagan rites there. 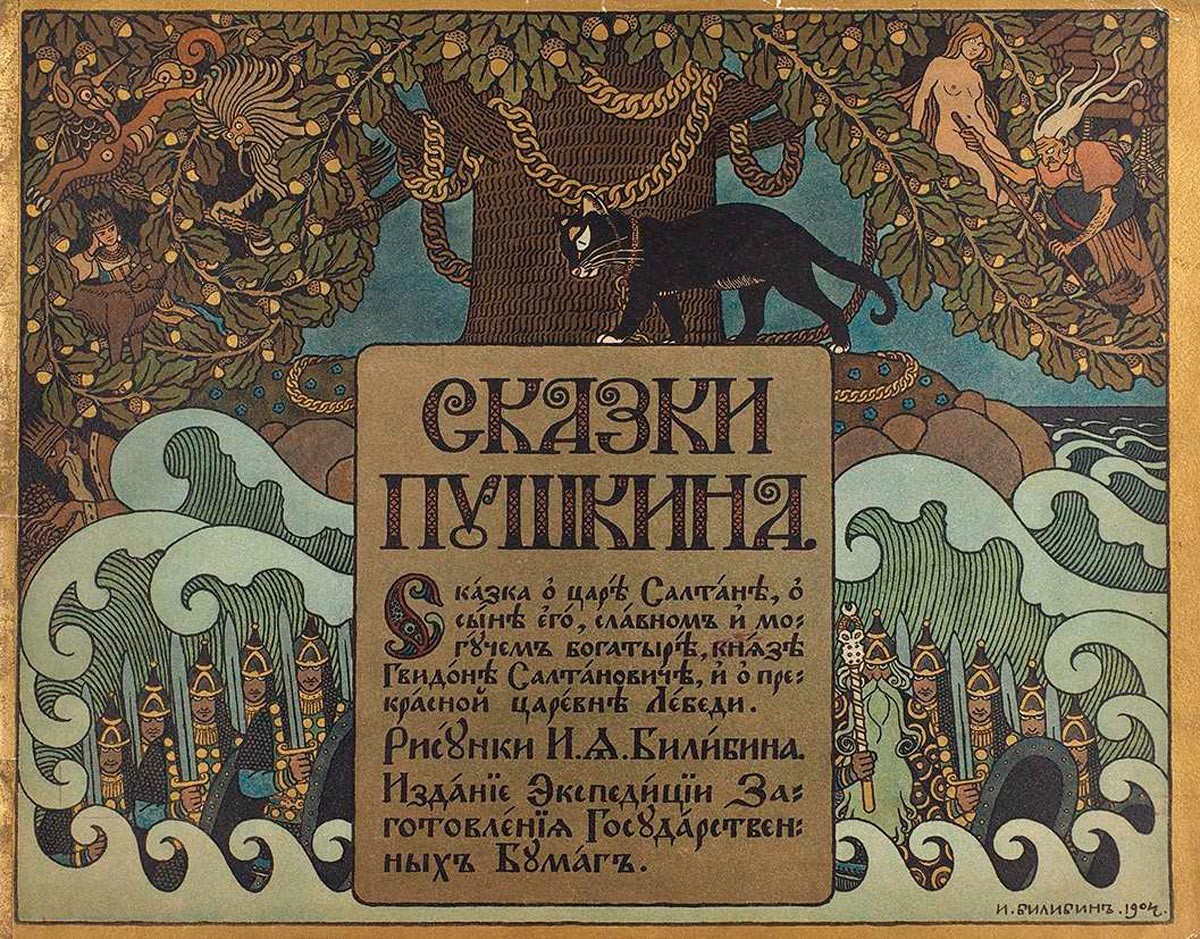 Meaning the edge of the world, “Lukomorye” can be roughly translated as “a curving shoreline,” the one that resembles a bow. Russian linguist and ethnographer Fedor Buslaev wrote that Lukomorye is a sacred place on the outskirts of the universe, where the World Tree, or the axis of the world, stands. Its roots are in the underworld, and its branches touch heaven, and gods ascend and descend from the tree.

Lukomorye was made extremely popular by Alexander Pushkin’s hypnotizing opening lines for “Ruslan and Lyudmila”: “In Lukomorye a green oak stands, to the oak a chain of gold is tied, and at the chain’s end night and day, a learned cat walks round and round” (translated by Roger Clarke).

In early European maps, the name “Lucomoria” was assigned to the Gulf of Ob, a great bay of the Arctic Ocean. However, in Russian chronicles and early Russian literature, the name Lukomorye refers to southern territories, near the Azov Sea and the Black Sea – for Russians of the Middle Ages, this indeed was the edge of the world. 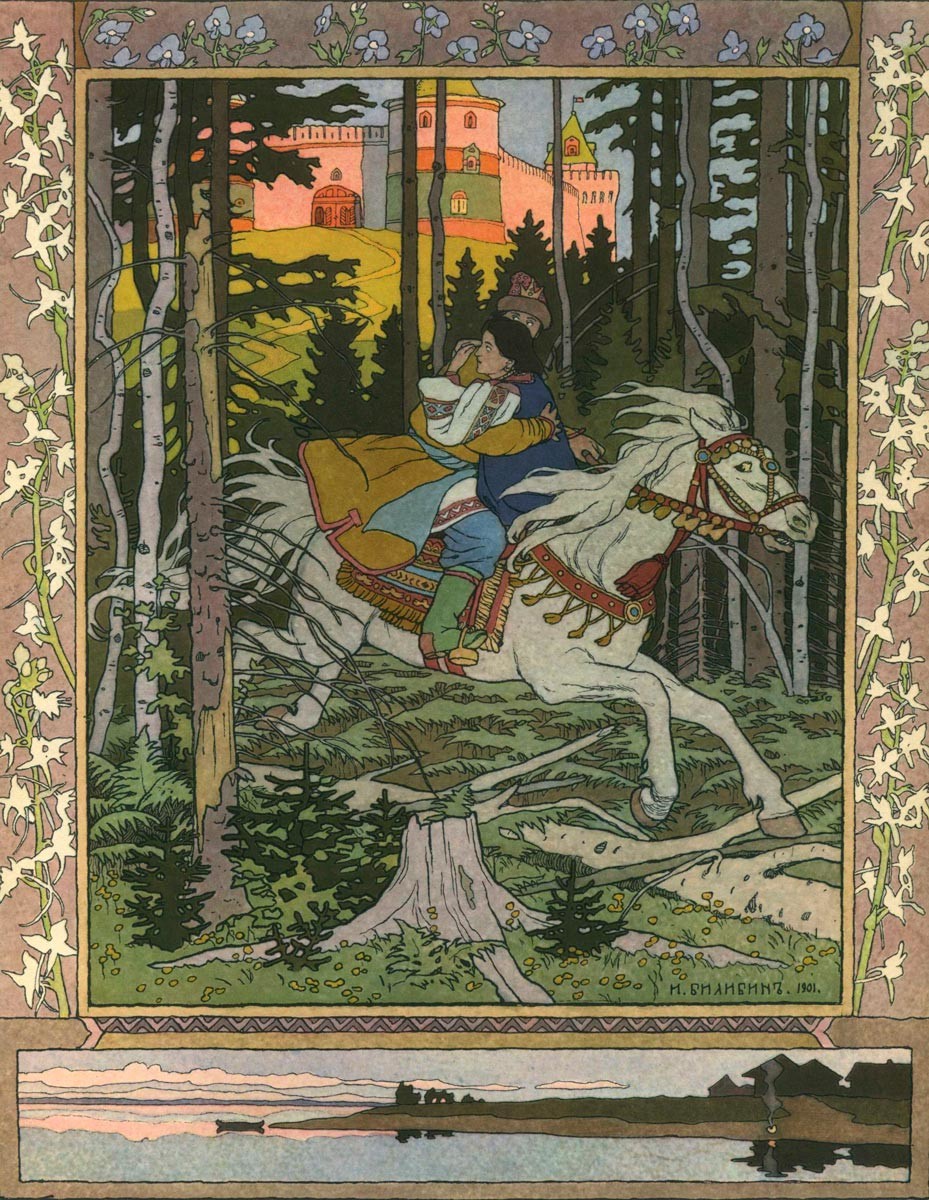 Many Russian folk tales start with “A long time ago, in the kingdom of the three nines and the state of three tens…” This traditional beginning usually just means “very far away.” Also, when a folk tale hero goes really far on his journeys, the tales say he crossed “three nines of lands.” However, the Three Nines Kingdom, folklore scholar Vladimir Propp wrote, was the Slavs’ afterlife and at the same time, land of plenty.

There, rejuvenating apples grow, springs with living and dead water flow, mythical serpents and birds reside. Sometimes, the kingdom is located underground, but it can also be located on a mountain or underwater. In the Three Nines Kingdom, the hero can replenish his real-life resources or gain supernatural powers. The Kingdom is separated from the outside world with a strong physical barrier, like an abyss, a dark forest, or a boundless sea.

Linguists and philologists believe the idea of the Kingdom of the Three Nines comes from the Slavic beliefs of afterlife that are very close to the Nordic myths of Valhalla, the land where heroes reside eternally after they perish gloriously in a battle. Going to the Three Nines Kingdom and returning to life endowed with supernatural powers also reminds us about the myth of Orpheus who visited the afterlife in search of his beloved.

By the way, “the Three Nines” is not a Slavic numeral – old Russian maths used different numerals. “Three Nines” is just a folk tale neologism – just like “the state of Three Tens,” it means “very far away.” 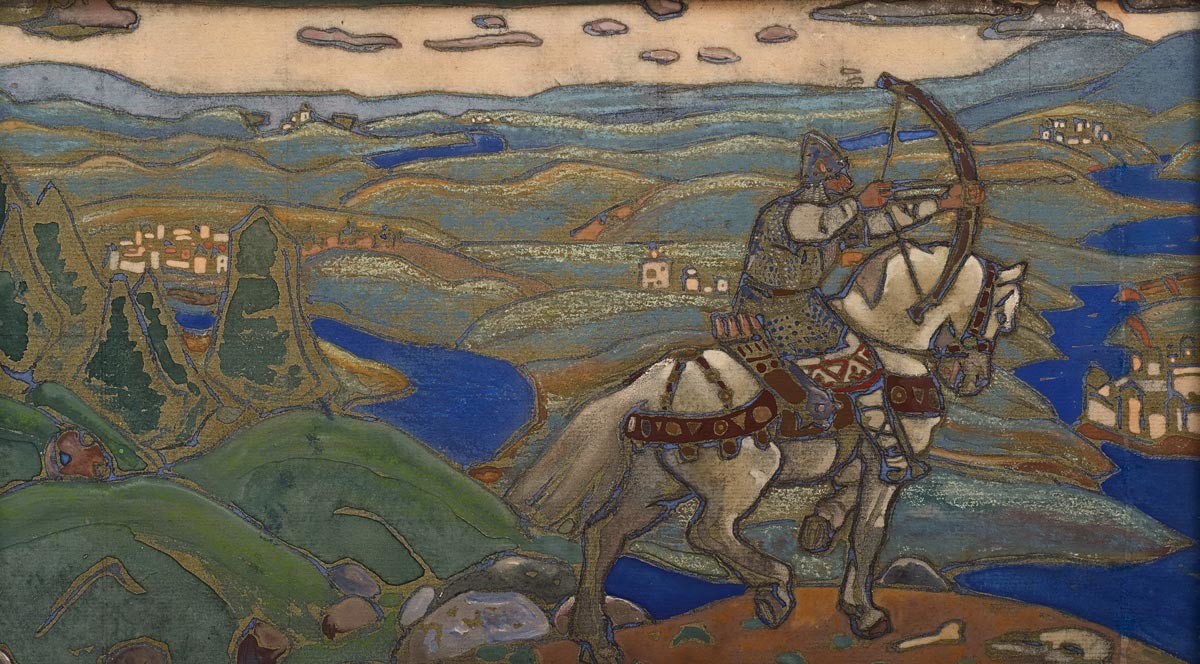 Surprisingly, the Slavs imagined their own Styx, a border river between life and the underworld, and in Russia, this river was called Smorodina, which translates quite clearly as “The Stinky One.”

The river is “stinky,” because it is made of constantly burning and fuming fire. Smorodina is the border between our world and the afterlife that a man’s soul needs to cross to get to the land of plenty (probably The Three Nines Kingdom).

“The melting river is ferocious, a fierce river, the angriest one of all. Its first trickle is like a fire, another one is a spark falling, and because of the third one, the smoke is coming down in columns,” an old Russian bylina (oral epic tale) “Dobrynya and The Serpent” relates.

Smorodina river has a personality: it speaks in a human voice, and has the soul of a beautiful maiden. It lets good men pass over itself in exchange for affectionate words and low bows, and drowns those who insult it. The bridge over Smorodina is called the Kalinov bridge, its name translates from Russian as “the red hot bridge,” guarded by Zmey Gorynych, the Russian epic dragon.

Historians and linguists fail to locate Smorodina in the real world. There are dozens of rivers and streams with that name in the Russian North as well as in the lands of former Kievan Rus. Foremost scholar of Medieval Russia, Boris Rybakov, for example, approximated Smorodina and Samara river in Ukraine, a left tributary of the Dnieper. It is obvious that the legend of the border river is so ancient that it is useless to search for one single and undisputed “Russian Styx.” 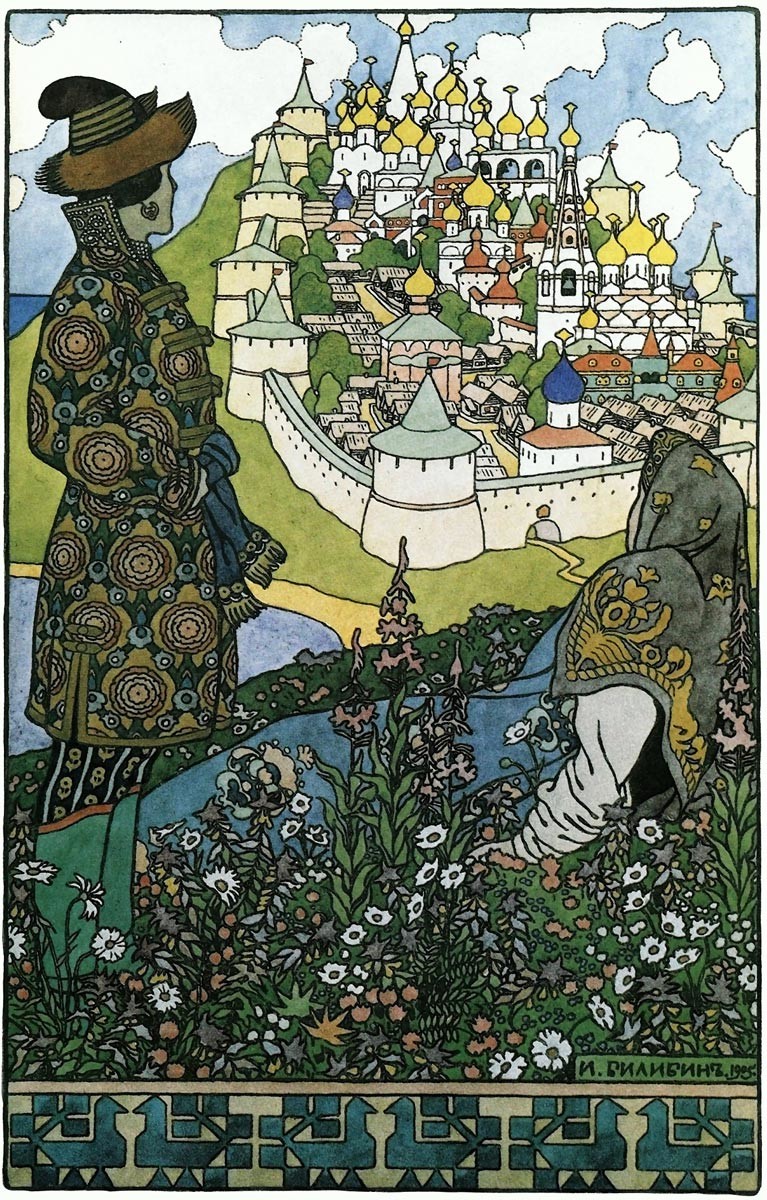 "The Buyan Island" by Ivan Bilibin

Buyan Island is another “blessed” place in Russian mythology, an enchanted island that stands amidst a roaring sea. There, a magic oak grows, with the death of Koschey the Deathless, Russian king of the underworld, hidden in its branches.

On Buyan island, a magic stone called Alatyr, “the center of the world,” exists. The one who touches this stone has all his wishes fulfilled (all of them, not three of them! Slavic gods were generous). The people living on the island don’t age, there is no winter, and endless food, drink, and joy.

Buyan was again popularized by Alexander Pushkin in his “The Tale of Tsar Saltan”: “Now our time is overstayed, east – due east – our course is laid, past the Island of Buyan, back to gracious Tsar Saltan" (translated by Louis Zelikoff). But is it possible to locate the island?

Influential scholars like Boris Uspensky or Vladimir Propp compare Buyan and the Isles of the Blessed, a place on the edge of the world inhabited by heroes and gods. The idea of such place existed independently in different mythologies – Greek (Elysium), Celtic (Avalon), and the Russian Lukomorye is also connected to the island of Buyan – the island stands in the sea that washes the edges of the world, including Lukomorye.

There are at least two real-life Buyan islands in Russia. One of them is a small river island on the Don river. Another Buyan island, located in the Kara Sea in the Arctic Ocean, was deliberately named after the mythical place.