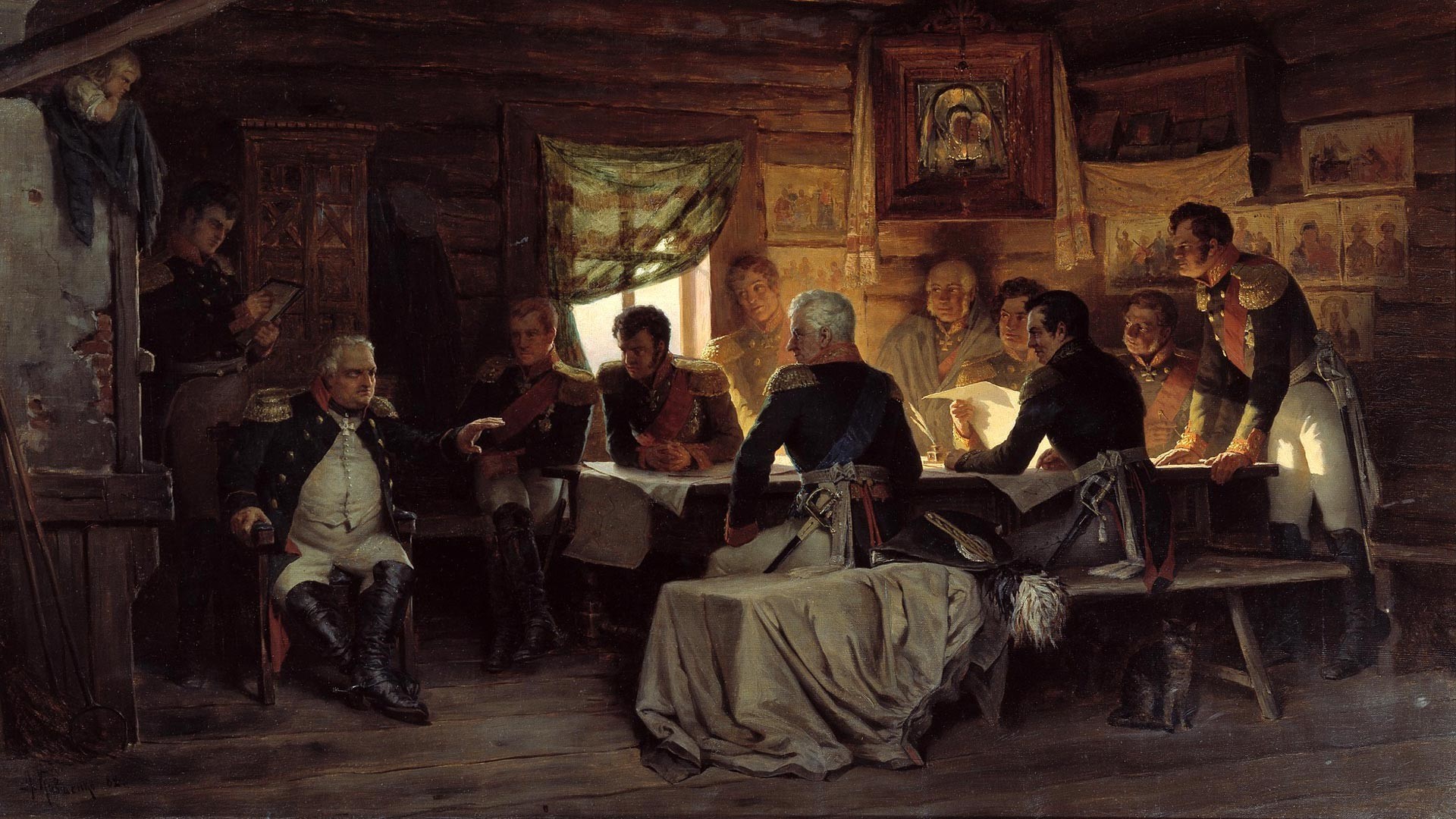 Alexey Kivshenko. General Kutuzov at the Council of Fili.

State Tretyakov Gallery / Public Domain
Mikhail Kutuzov managed to beat Europe’s best army through attrition and wit. In a matter of several months, out of its over 600,000 soldiers, just fewer than 100,000 remained.

“I do not promise to beat him, but I will try to outwit him,” Commander-in-Chief of the Russian Army Mikhail Kutuzov replied when asked how he was going to defeat Napoleon, whose troops had invaded the Russian Empire in June 1812. Indeed, it was his cunning ability to mislead the enemy about his true intentions, as well as ability to act covertly, that were the Russian commander’s particular strengths. “Clever, clever, cunning, cunning... No-one can deceive him,” another famous military leader, Alexander Suvorov, said about Kutuzov. 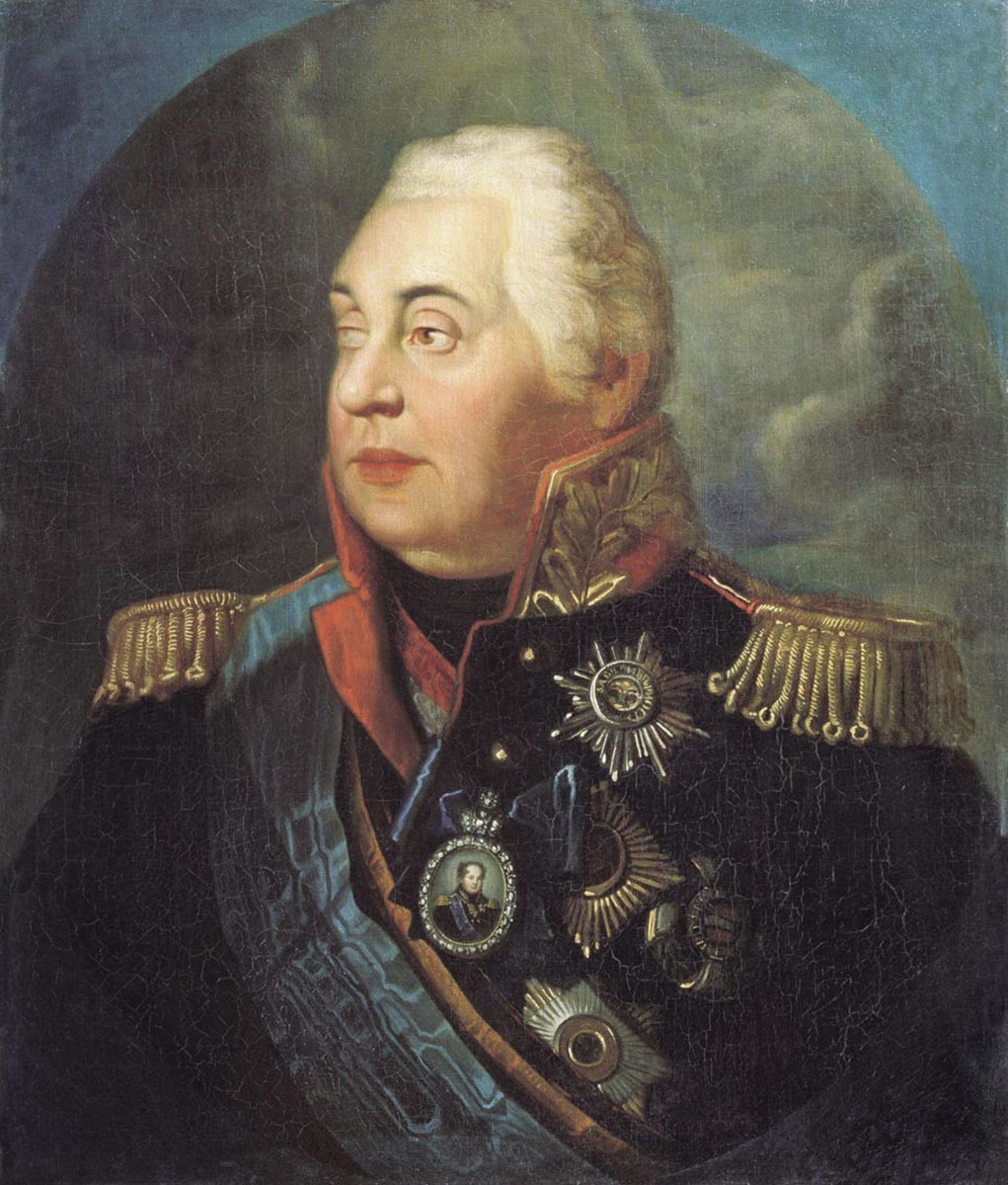 Before becoming “the old fox of the North”, as Napoleon used to call him, Kutuzov was a fearless young officer, always the first to attack and the last to stop pursuing the enemy. But this reckless courage nearly cost him his life. During the war against the Turks in July 1774, Mikhail Illarionovich was gravely wounded: a bullet entered his left temple and exited near his right eye. Some 14 years later, during another military conflict against the Ottoman Empire, he was wounded again, with the bullet passing “from temple to temple behind both eyes”. "One is led to conclude that fate has something great in store for Kutuzov, since he has survived two wounds that - according to all the rules of medical science - were fatal,” noted surgeon Jean Massot, who was treating him at the time. 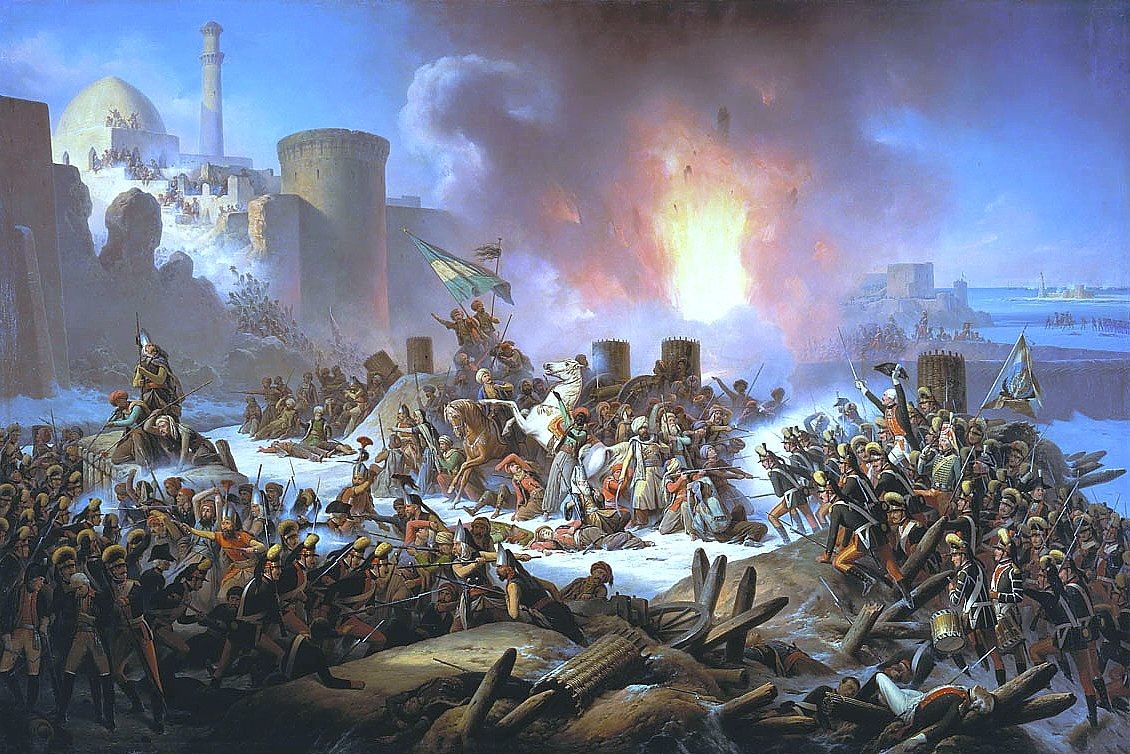 January Suchodolski. The Siege of the Fortress Ochakov.

Kutuzov took part in numerous campaigns against the Turks. Commanding one of the advancing columns of troops on December 22, 1790, he played a key part in capturing the fortress of Izmail, which was considered impregnable. Suvorov would later say: “There was no stronger fortress or more desperate defense than Izmail... An assault like this can be launched once in a lifetime.” In addition, Mikhail Illarionovich participated in the suppression of the Nogai Uprising in Crimea in 1783 and in the Polish-Russian War of 1792. More than once, as a skilled diplomat, he was also involved in holding peace negotiations.

Mikhail Ivanov. The Siege of Izmail.

But Kutuzov saw some defeats, too, in particular in the Battle of Austerlitz on December 2, 1805, which, in effect, put an end to the War of the Third Coalition. As the commander-in-chief of the Russian-Austrian army, he knew that his troops at the time were not ready for a decisive battle against Napoleon, but he had to submit to the will of Emperor Alexander I, who thought differently. That brought him much criticism in subsequent years. “At Austerlitz, he lacked the civil courage to tell the young emperor the whole truth, in order to prevent one of the greatest disasters for the Fatherland,” wrote 19th century Russian military historian General Heinrich Leer.

François Gérard. The Battle of Austerlitz.

Kutuzov’s striking military talent came to the fore in the Russian-Turkish War of 1806-1812. Having defeated the enemy in the battle for the fortress of Ruschuk (Ruse) on July 4, 1811, he did not pursue the Turkish troops, but instead retreated to the other bank of the Danube. The perplexed enemy mistakenly concluded that the Russian army had suffered great losses and was utterly weakened. In the fall, the 56,000-strong army of Grand Vizier Ahmed Pasha, who was determined to defeat the Russians once and for all, set about crossing the river and, thus, had to split its forces. Kutuzov’s troops, which had just half of the enemy’s numerical strength, immediately took advantage of the presented opportunity to defeat the Turks one part at a time. Subsequently, Mikhail Illarionovich personally participated in the signing of the Treaty of Bucharest in 1812, under which victorious Russia took possession of Bessarabia (Moldavia). 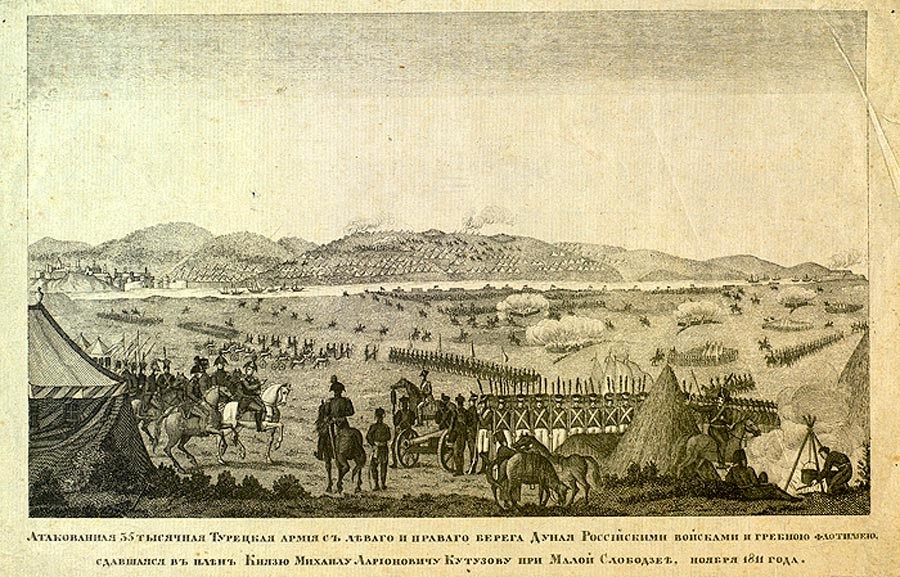 The capture of the Turkish army at Slobodzee.

On June 24, 1812, Napoleon’s Grande Armée crossed the border of the Russian Empire. Acting Commander-in-Chief of the Russian army Michael Barclay de Tolly avoided confronting the French in an all-out battle, preferring instead to retreat inland. In the end, public dissatisfaction with this tactic prompted Alexander I to appoint Mikhail Illarionovich commander-in-chief on August 18. “Finally, already when we were camped at Tsarevo-Zaimishche, there came news of the arrival of Kutuzov, a veteran of the Russian army, who had been appointed commander-in-chief. Universal revelry ensued, everything came to life again, hope came to life again: the whole army viewed this gray-haired warrior as its savior angel,” officer Ivan Dreiling recalled. 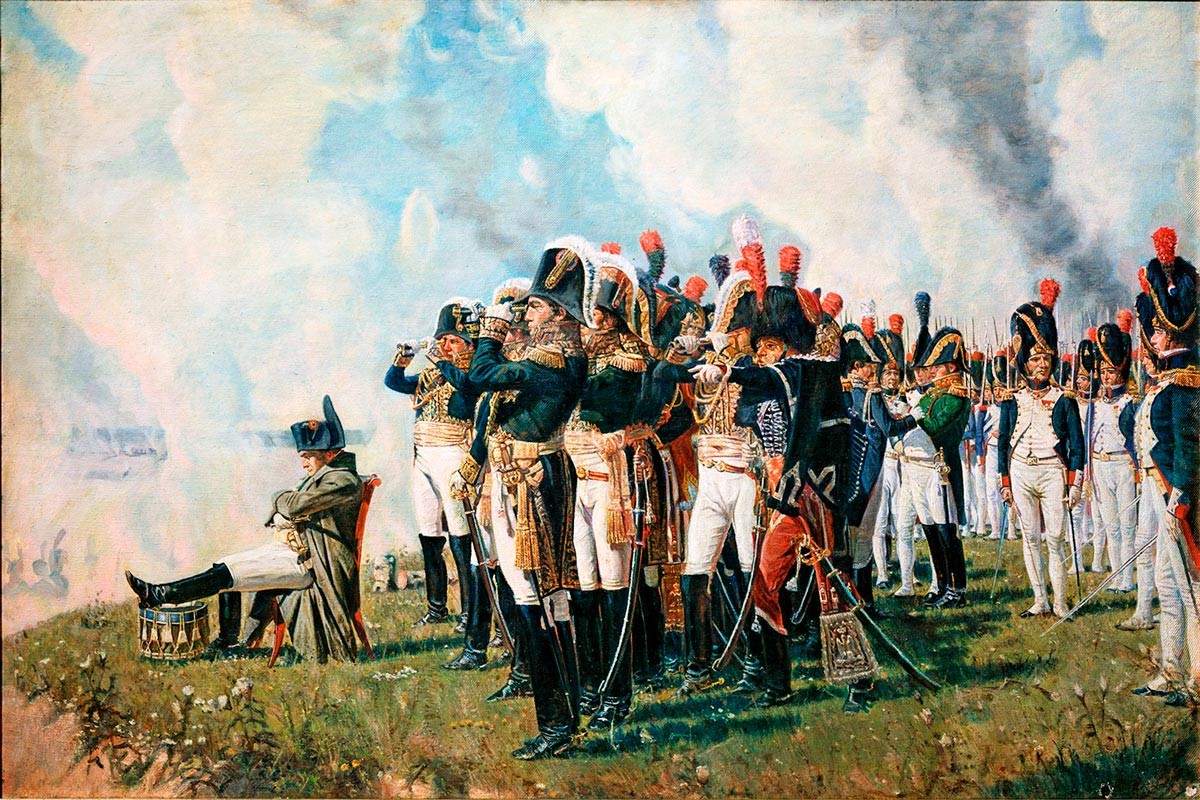 However, Kutuzov was not too eager to engage the enemy in a battle either, overall agreeing with the logic of his predecessor’s actions: La Grande Armée had to be beaten through attrition. And yet, under pressure from the general public, the commander was forced to fight Napoleon’s army in a battle, which took place on September 7 near the village of Borodino, not far from Moscow. In what became one of the bloodiest battles in the history of the 19th century, about 80,000 people were killed, but neither side could claim a decisive victory. As Napoleon later noted: “The Battle of Borodino was the most beautiful and the most formidable, the French showed themselves worthy of victory and the Russians deserved to remain undefeated.” 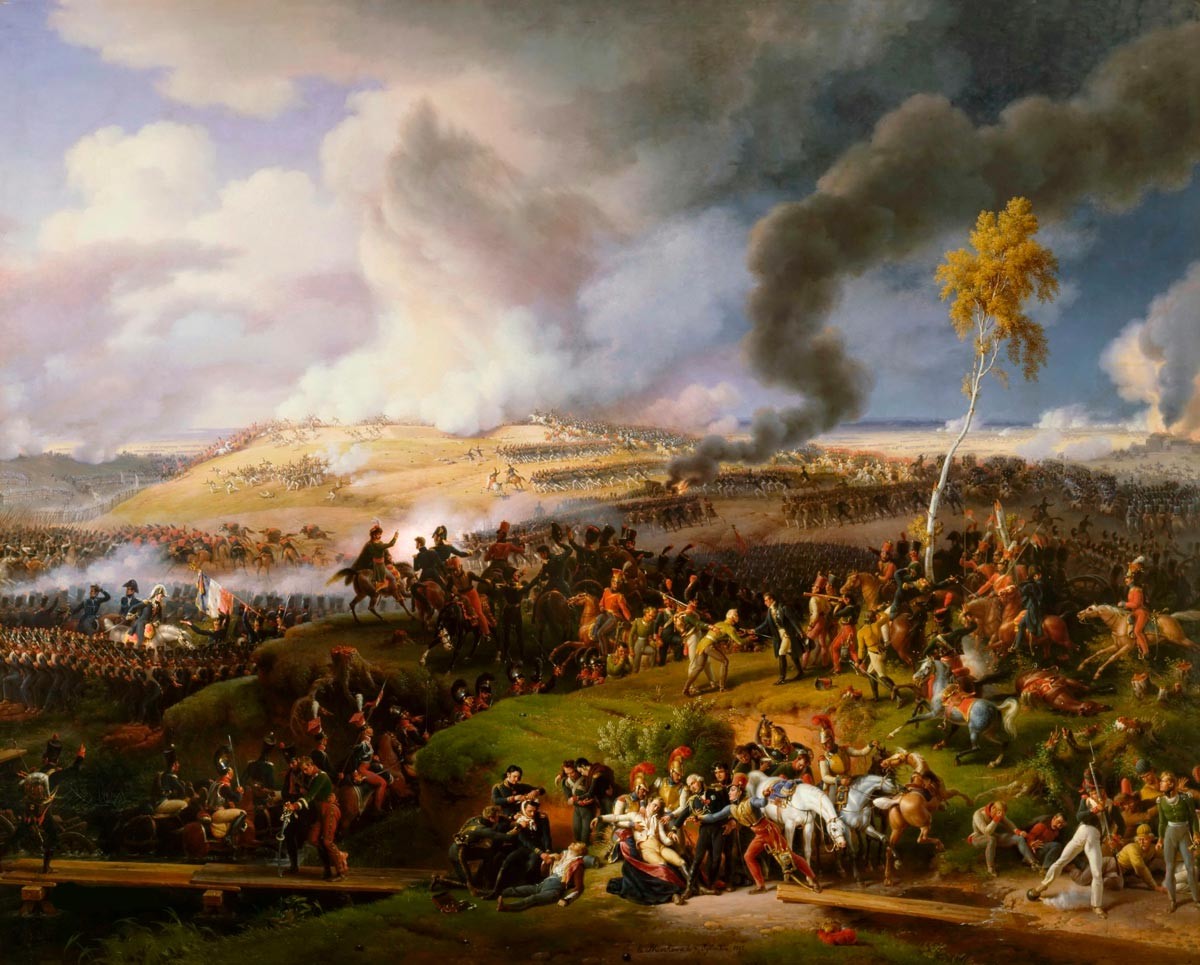 Louis Lejeune. The Battle of Moscow.

The huge losses and expended reserves prompted Kutuzov to abandon plans for a new battle. He made the difficult decision to cede Moscow to the enemy. “With the loss of Moscow, Russia is not lost. I consider the primary task is to save the army,” Mikhail Illarionovich said on September 13 at a military council held in the village of Fili to the west of the city. 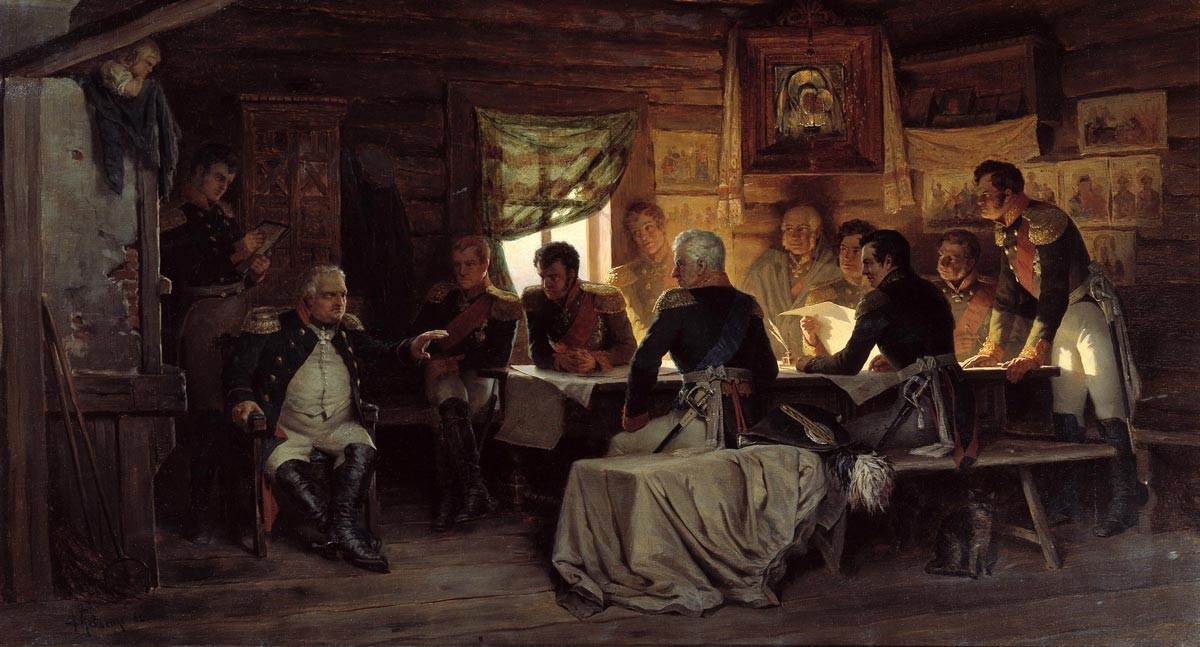 Alexey Kivshenko. General Kutuzov at the Council of Fili.

On September 14, 1812, the Russian army left Moscow and headed southeast towards Ryazan, but, two days later, it turned sharply to the west. At the same time, its rear guard units led the pursuing cavalry of Marshal Murat along the Ryazan road, making the French believe – erroneously - that they were pursuing the main forces of the Russians. It was only five days later that they realized their mistake. For 12 days, Napoleon had no idea where the Russian army was and where it was heading. “The enemy, having lost sight of our army and remaining perplexed, is sending strong detachments to various points to discover us,” Kutuzov reported to Alexander. When the Russian army was finally discovered, it turned out that it had already fortified itself near the village of Tarutino, 90 kilometers southwest of Moscow, reliably defending access to the southern provinces with their warehouses and bases. “...The cunning Kutuzov deceived me with his bold march,” the emperor lamented. 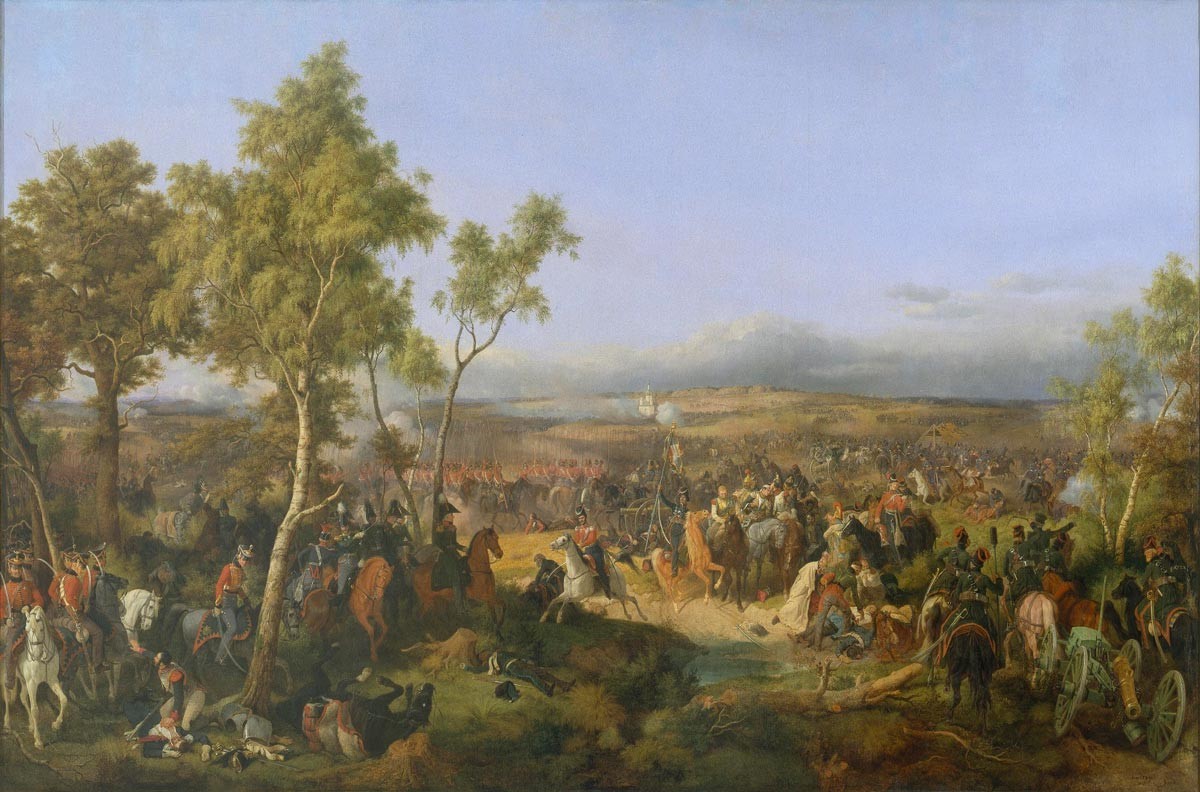 Moscow turned out to be a trap for Napoleon, where his army - through forced inaction, drunkenness and looting - began to quickly lose morale. With his peace proposals to the Russian tsar remaining unanswered, Napoleon and his troops left the city on October 19. Kutuzov did not allow him to break through to the south, forcing La Grande Armée to retreat along the Smolensk Road, which it itself had plundered in the summer. Throughout its retreat to the border of the Russian Empire, the French army, like a wounded beast, was tormented by numerous partisan and so-called “flying” detachments, formed from cavalry and Cossack units, and relentlessly pursued by the Russian troops. 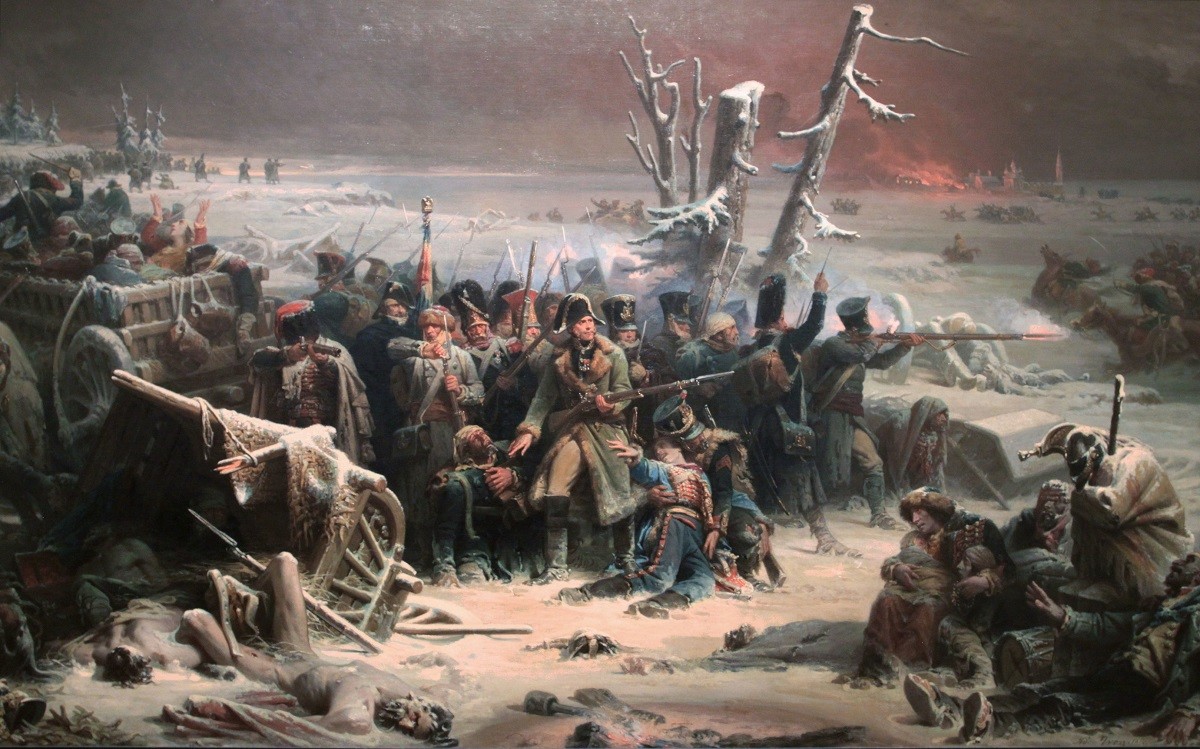 If, at the beginning of the 1812 campaign, Napoleon’s Grande Armée, together with reinforcements from Europe, numbered some 600,000 people, in December of the same year, only a few tens of thousands of frozen and exhausted soldiers managed to escape from Russia. In January 1813, Russian troops entered East Prussia, thus marking the beginning of the so-called foreign campaign of the Russian army. However, Mikhail Illarionovich was not destined to see Napoleon’s final defeat, for which he had done so much to achieve. On April 28, the 67-year-old commander died in the small Silesian town of Bunzlau. 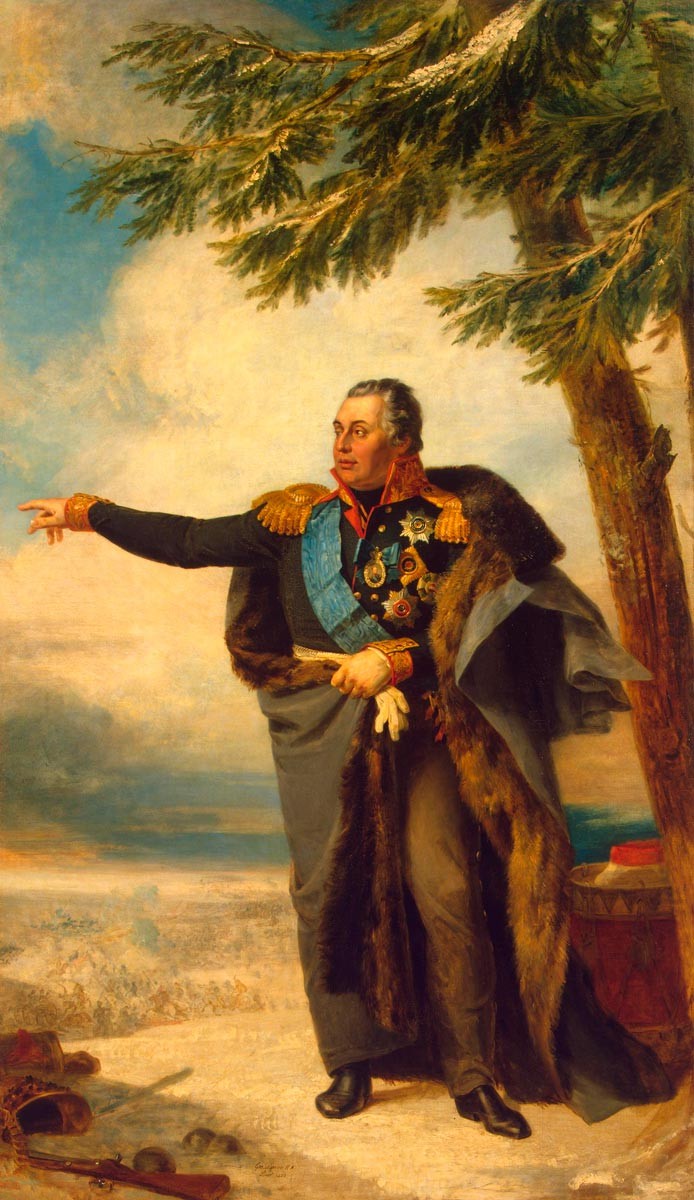