History
Russia Beyond
Restaurants used to be a luxury for the very few, but that did nothing to stop the Soviets’ love of food and get-togethers. The dinner table, therefore, was always a center of power in the home, to which everyone was drawn. 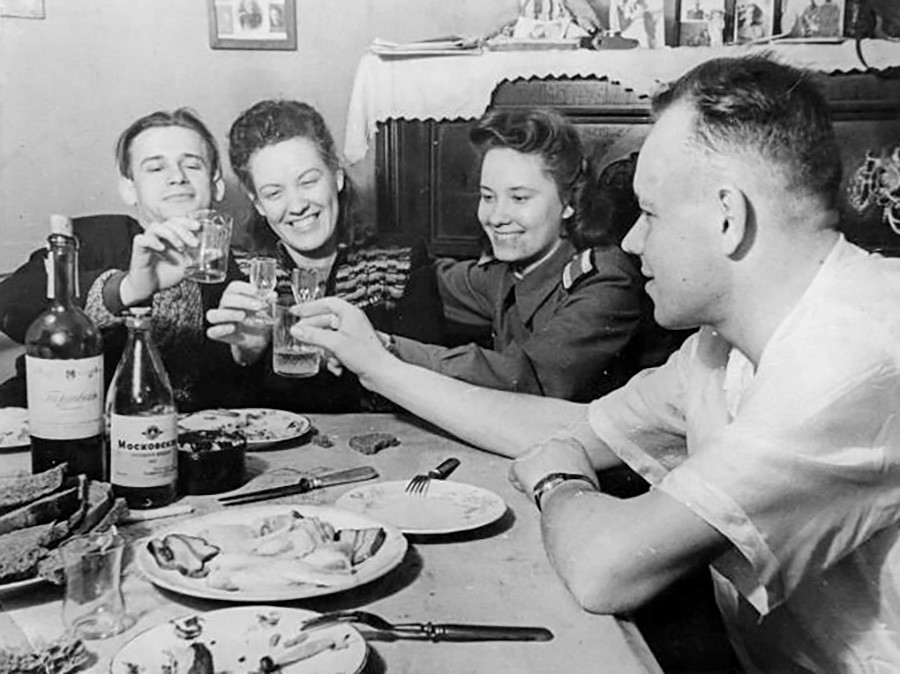 Visiting friends on state holidays, or even for no apparent reason, was near the top of everyone’s list of favorite things to do in the USSR. Going for tea or talking the day away in the kitchen until late night - this was the picture of an ideal time in those days. 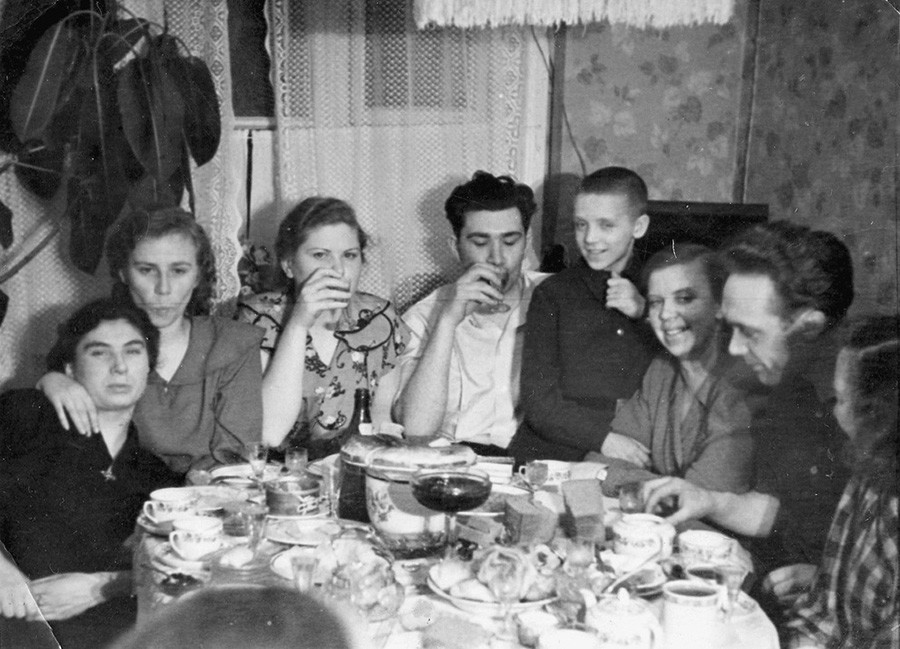 If the group was small, the table was usually set in the kitchen. It was there that tea - or a shot of something stronger - was used as lubricant for conversations about important issues - literature, current affairs, the meaning of life, the way the world worked… 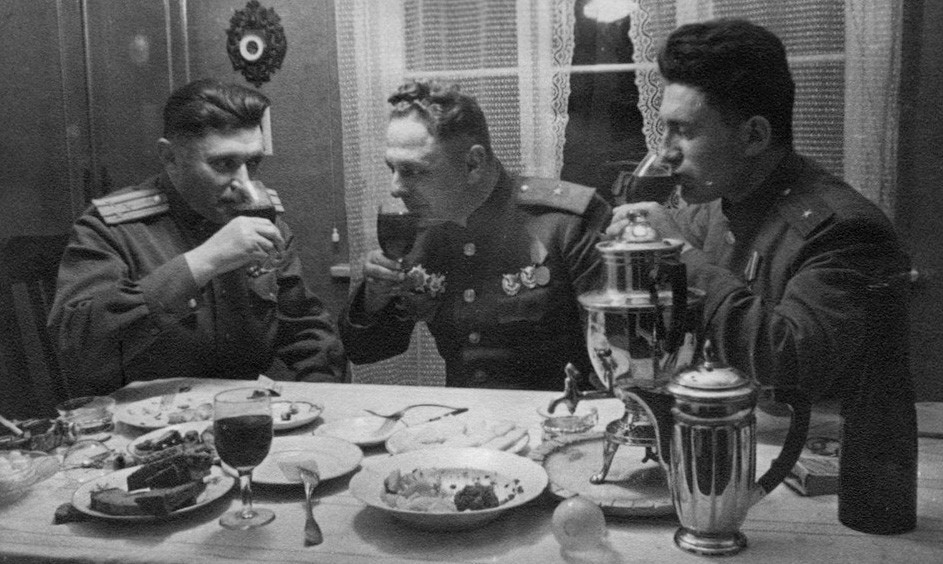 Museum of Jewish History in Russia

These impossibly small kitchens in Soviet apartments could hold an unprecedented number of people wanting to chat or have a cigarette - and no one ever felt cramped. 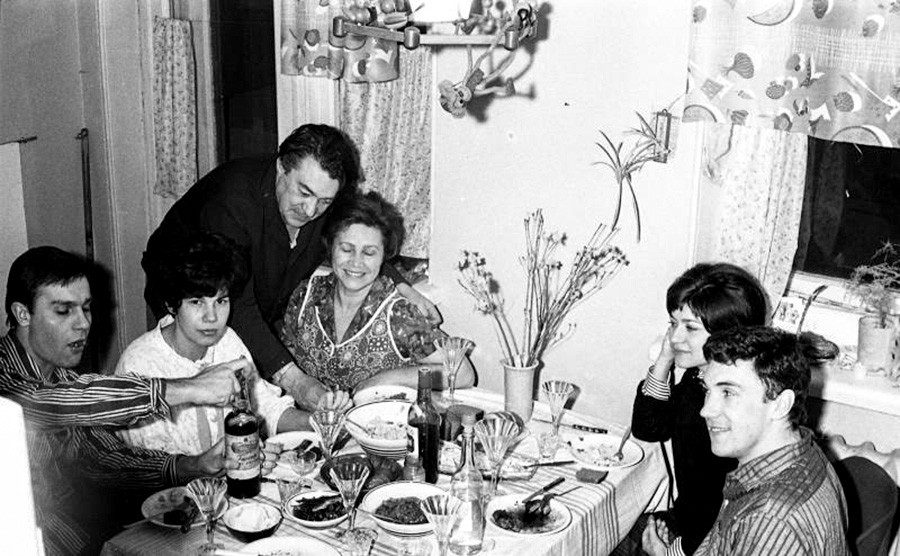 On important occasions, the party would move to the living room. There was more space there. Practically every apartment had a foldable table that could be expanded by up to four times in length. 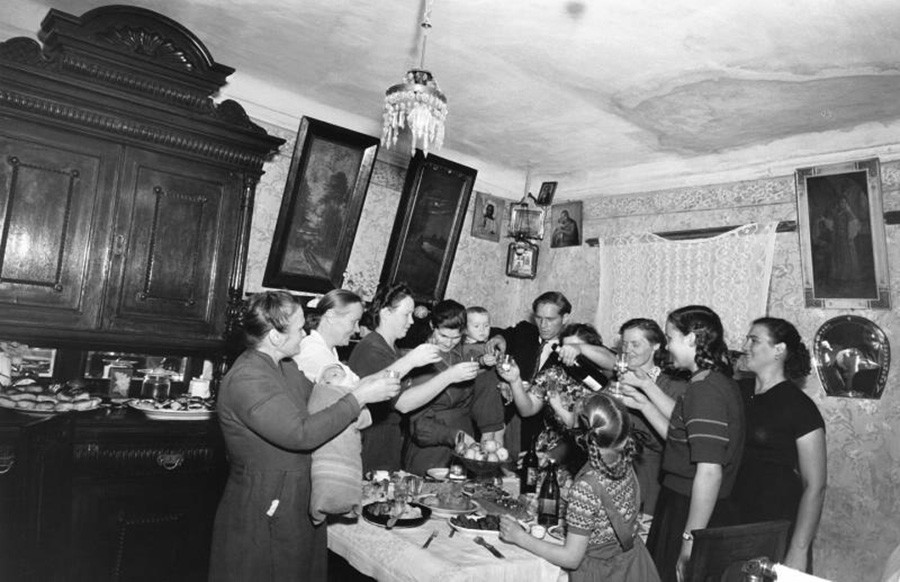 People approached get-togethers with a military precision. The best table cloth was always used, while the most expensive tableware would be taken off dusty shelves in cupboards - plates, wine glasses and the like - which were otherwise not in use for an entire year until an important day rolled around. 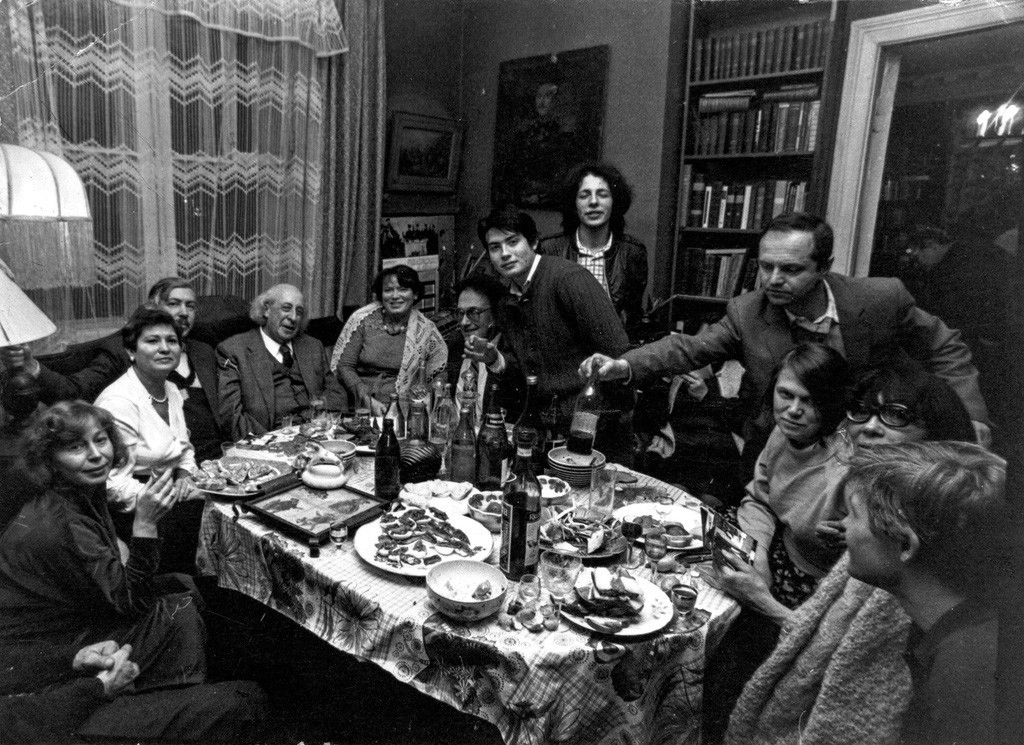 Food preparation could begin two, sometimes three days before the big day; the woman of the house would often ask relatives or girlfriends for help with the cooking. Kholodets, for example, must be cooked for the duration of the night and then let stand for several hours in the fridge. 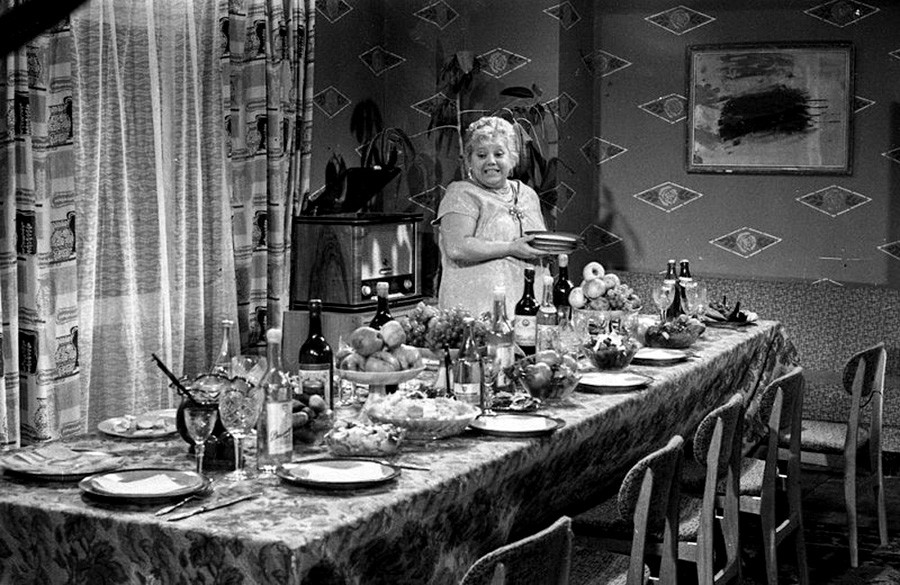 By the time the guests arrived, the table would be ready and set: this means with at least three types of salads (with mayonnaise, of course). The process involved boiling, slicing and dicing a bunch of veggies and meats. They could include the classical New Year’s ‘Olivier’, as well as ones involving canned fish - such as ‘Mimosa’. 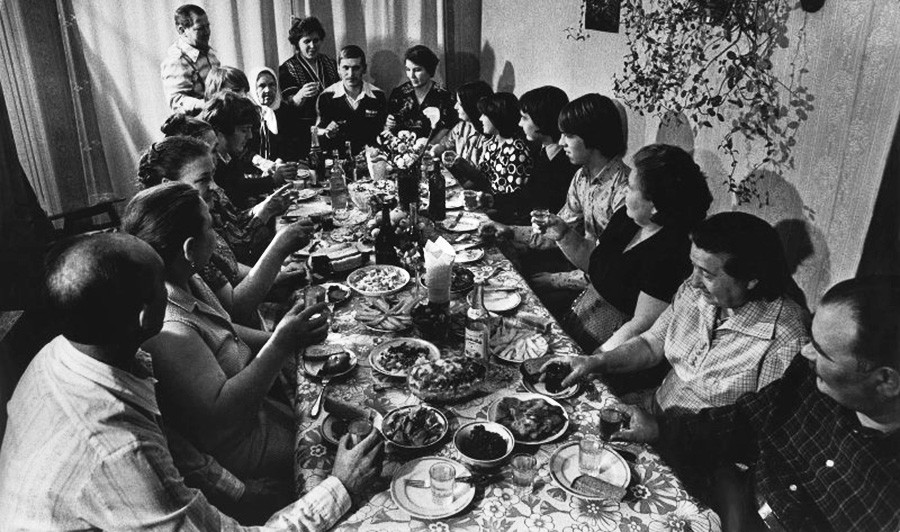 Guaranteed was the presence of several more extravagant dishes - ‘Jullien’ (melted cheese over fried mushrooms), fried eggplant rolls with cheese, boiled eggs with red caviar and so on. The hostesses were never found wanting for imagination, which frequently reached epic proportions. 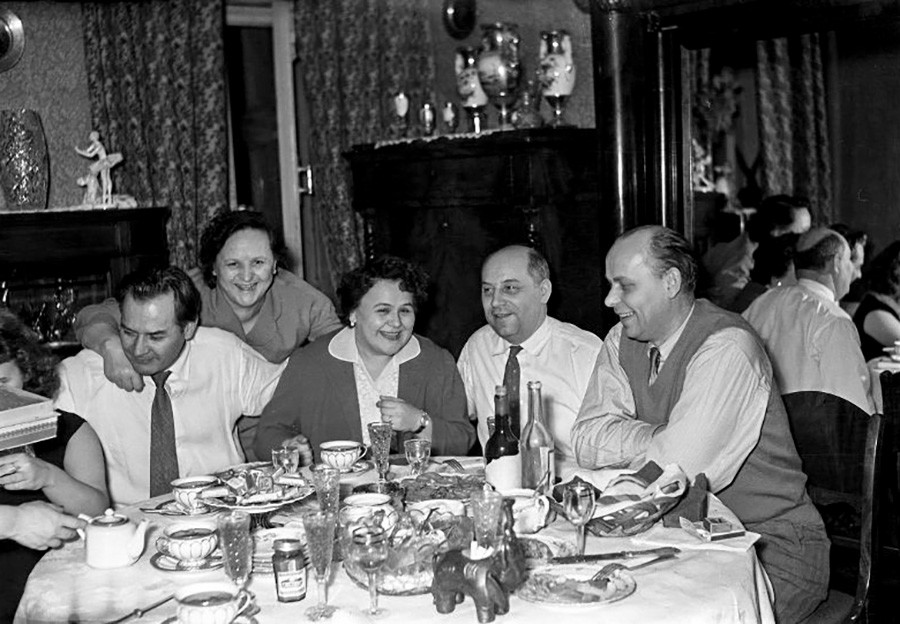 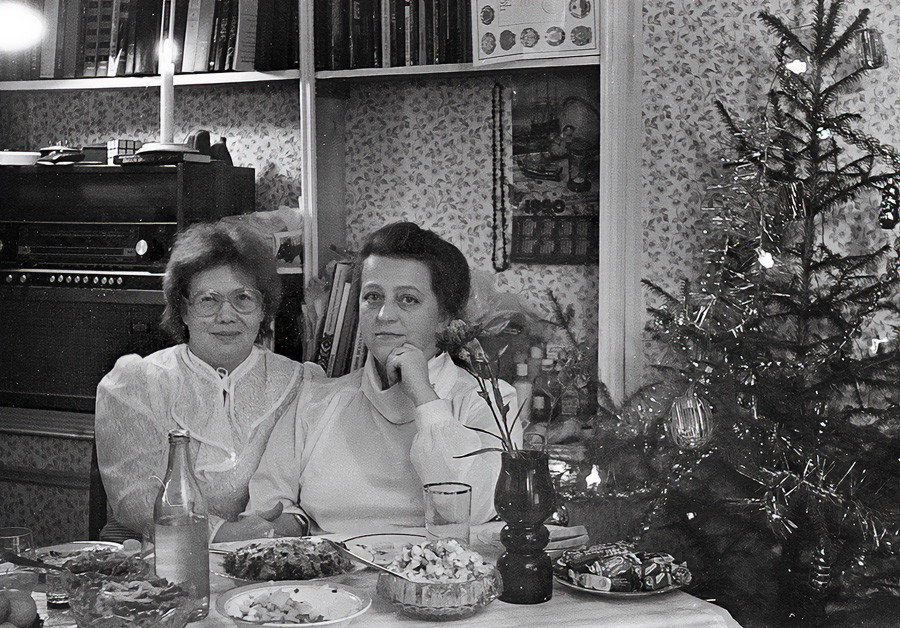 After the guests stuffed themselves with salads, the main course would be brought out - roast duck or ‘French-style meat’ (prepared in the oven, topped with mayo and cheese). And of course, potatoes - boiled or roasted; it was, after all, cheap and everyone loved this basic item. 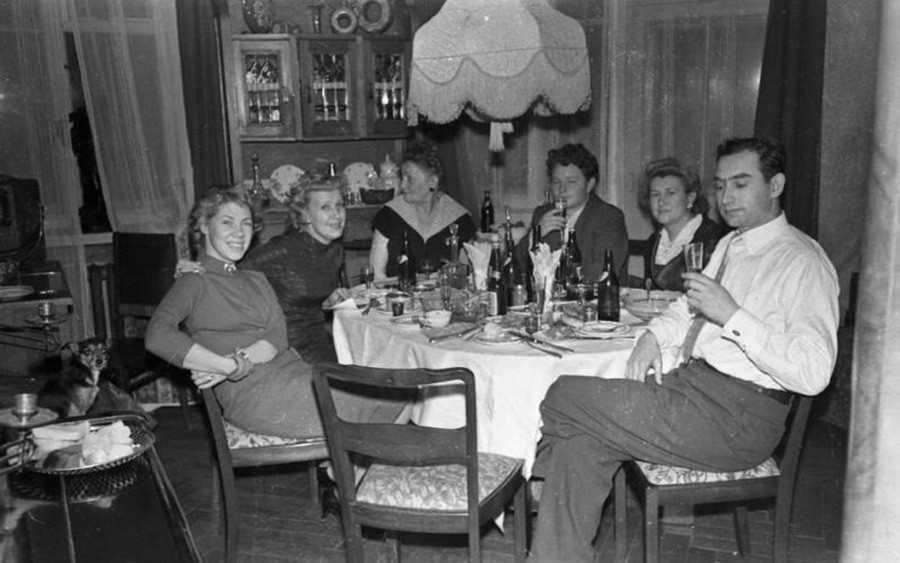 Large feasts were often held for birthdays, weddings (that’s right - these were often celebrated in the comfort of the home), New Year celebrations, naturally, and other important occasions, such as International Women’s Day or Defender of the Fatherland Day (February 23). 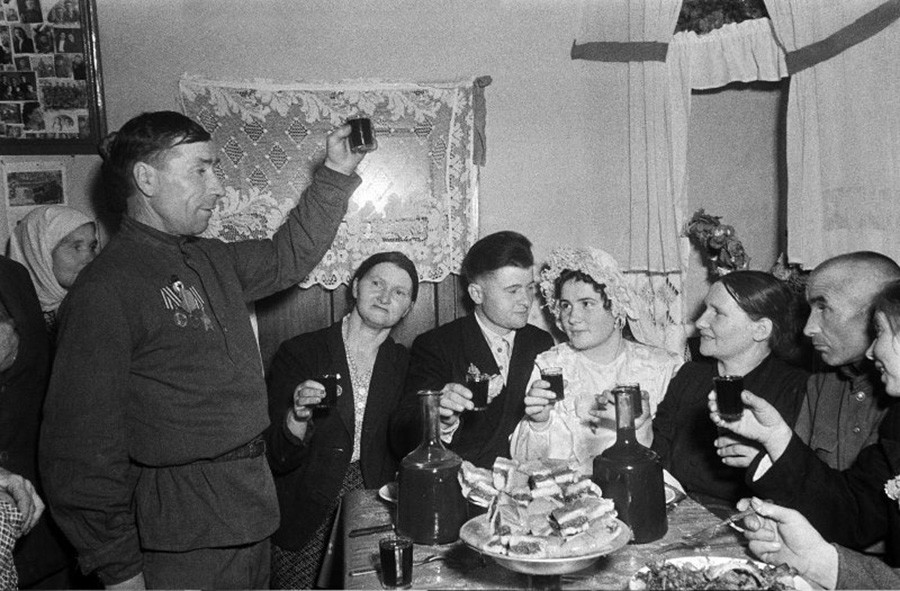 People would get together at 2-3 in the afternoon and sit until the early hours of the morning. One might ask: What could people occupy themselves with for such long periods? Well - eating, of course (what with all that food laid out!), as well as pronouncing endless, lengthy toasts and, of course, losing themselves in conversation, while remembering all manner of amusing stories from days past. 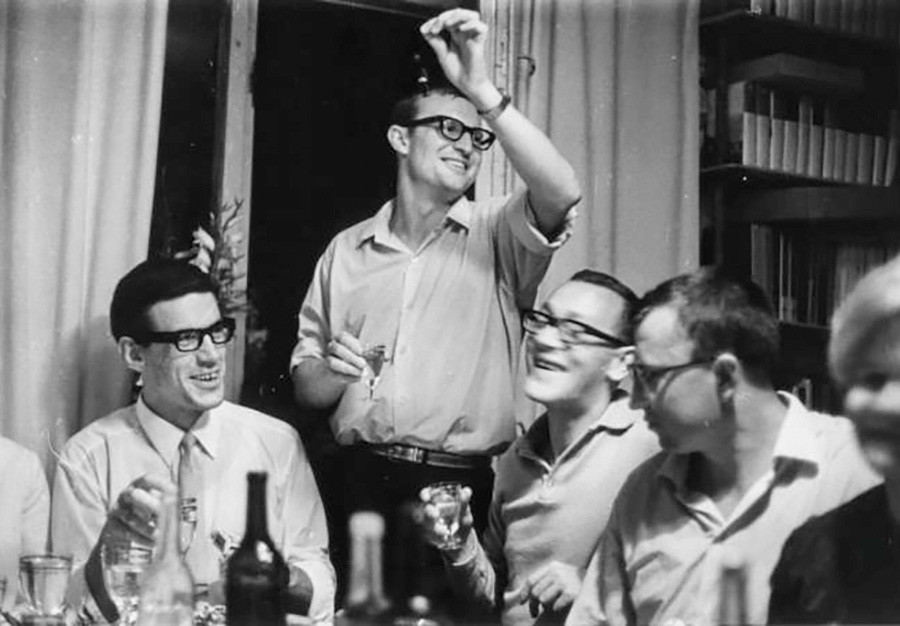 After filling themselves to the brim with food and convincing the hostess that they had no space for more, the guests would use the last of their strength to fit in tea and dessert. Sweets, home-made cake - or store-bought - tea and dessert after dinner were always a must. 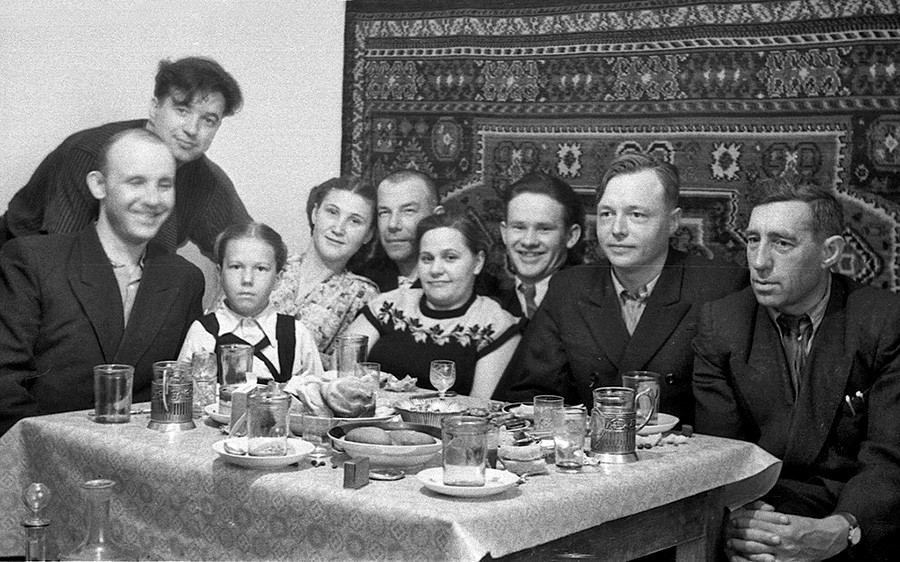 If the next day fell on a weekend, the festivities could end with a musical performance - someone would pick up a guitar or an accordion - or some records were played and people would dance. 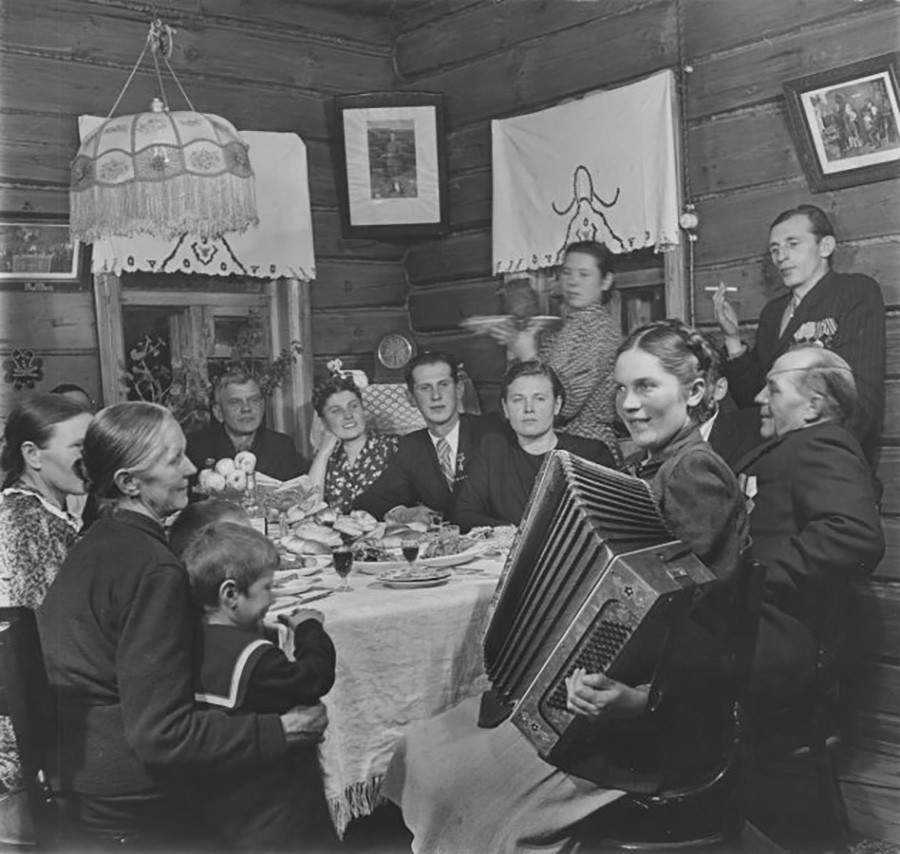 By the way, there was hardly anyone you could leave your kids with for the night, so they were often brought along and participated, running around the corridors and rooms, before finally passing out literally at the table or in chairs, while the adults continued dancing (and no one ever reduced the volume of the music - such was the rough Soviet upbringing… plus those kids could sleep through anything). 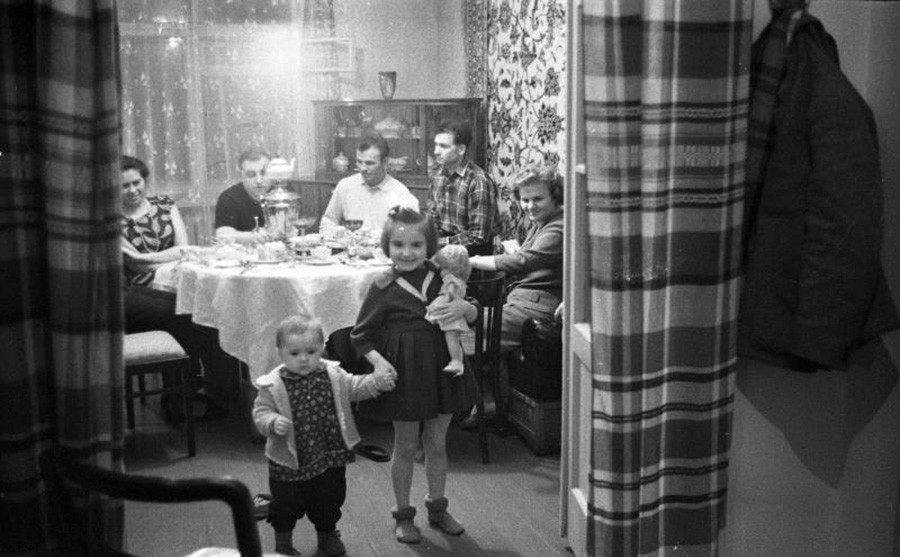 And it’s not only the children that fell asleep in the process… anyone could ask for a place to lie down for a little while to replenish their strength and attack the dishes, salads and French-style meat with fresh force. 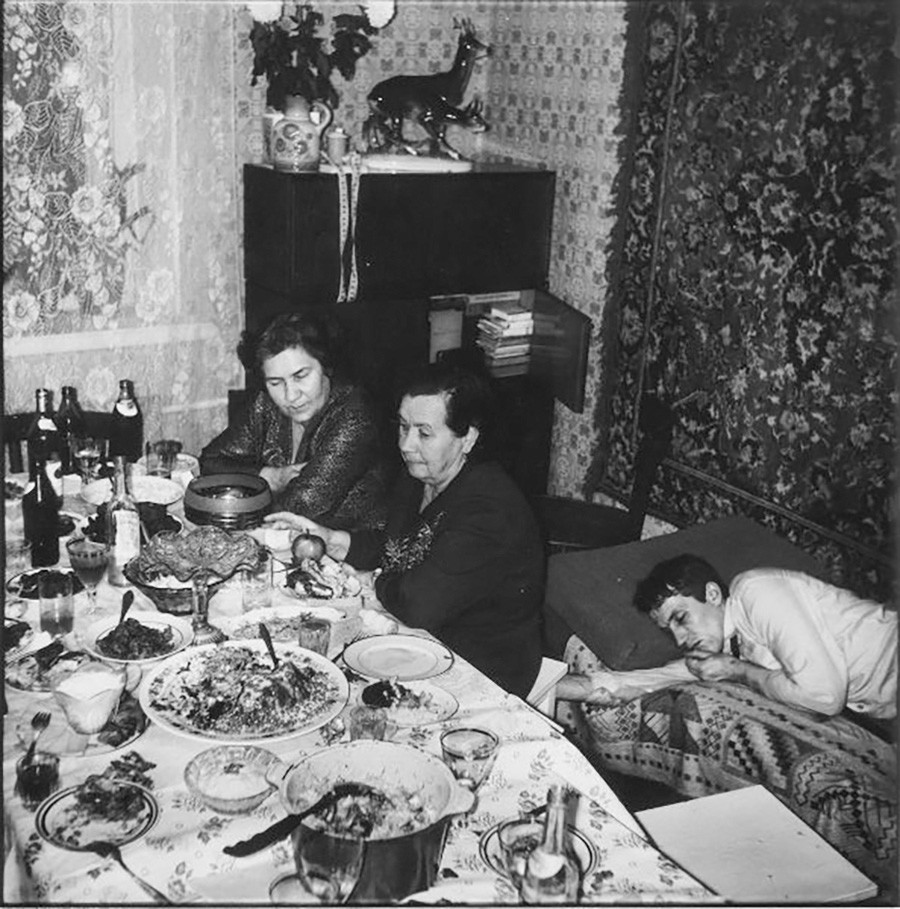