The FINAL day of the USSR in people’s diaries 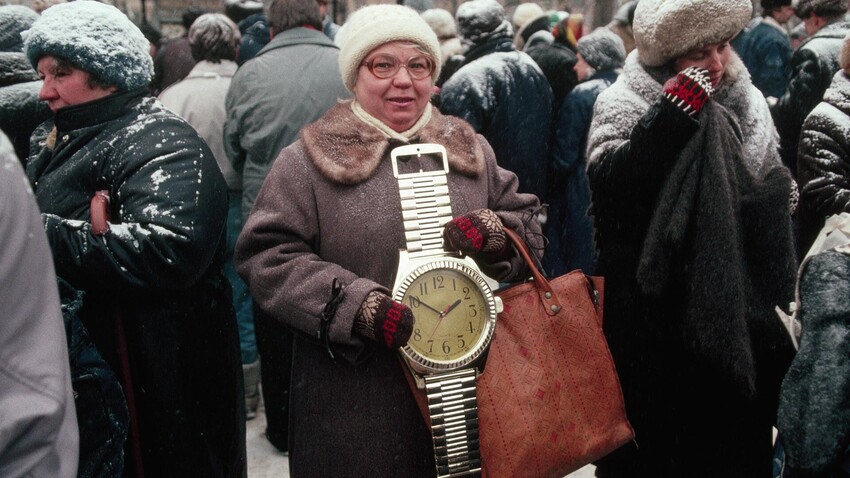 Soviet woman shows off a clock shaped like a wristwatch.

Peter Turnley/Corbis/VCG/Getty Images
On the morning of December 26, 1991, the citizens of the Soviet Union woke up in a new country. We managed to peek at the diary entries of people of different professions and walks of life, all made in the immediate aftermath of the USSR’s collapse.

Thursday. Yesterday evening, Gorbachev handed in his resignation and delivered his speech on TV. I chose not to watch. There isn’t a single person I despise more. I’m a specialist in the art of mimicry. There he is, my hero. My dream – a slap in the face in the name of the people.

…Things are going ugly and lousy: the money that I was saving up in the bank is disappearing, life is becoming harder and more complicated. The day before yesterday, a Sunday, someone downstairs smashed my car’s windshield at around 8 in the evening. Toiled for two days putting it back in. 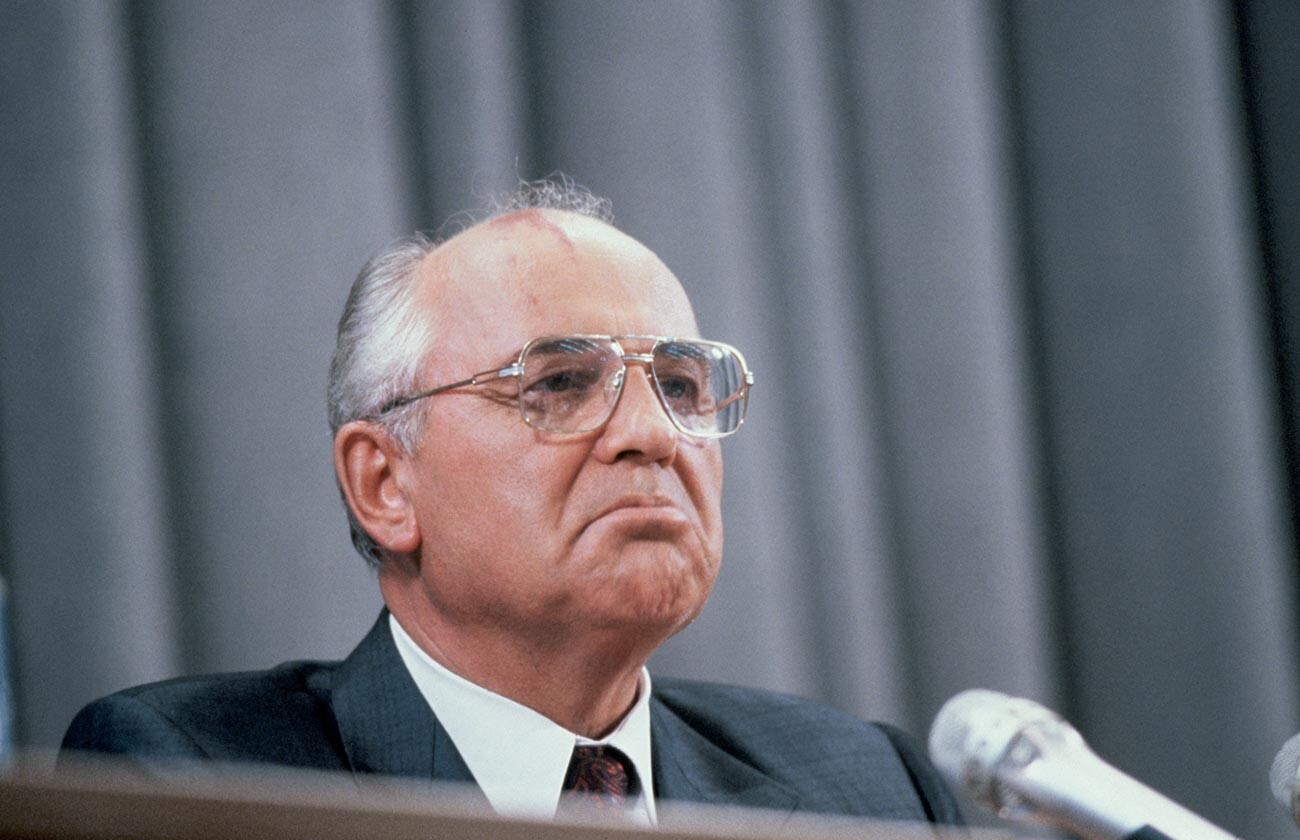 The New Year approaches. The recent events - the agreement of the 11, the USSR’s brakekup du jure, and M. S. Gorbachev’s speech last night - who’s bound to be hounded by various revelations (it’s a national disease – kicking the one who’s down, because you’re free of consequences). They’re going to take pieces out of that guy with gusto, that’s for sure – from all sides. Poor Mikhail Sergeevich! (The ‘Nezavisimaya Gazeta’ [newspaper] is reporting today that some casino owner is offering him a million-dollar job!)

Everyone is waiting for “vacation” prices, the stores are all empty, nothing there, but the people, apparently, won’t really feel it until after the holidays. And in the morning they woke up… and really, in the New Year it will all change and I’ll be unemployed. Although, (here’s the funny part!) my current salary (270 rubles plus 60) is less than the unemployment benefits (342 rubles). A bottle of champagne at a kiosk costs 150 rubles, a down jacket – 6,500-7,000 rubles, a shirt - 300-400 rubles.

Just now on ‘Radio Russia’, some doctor pronounced in a heartfelt tone: “We have completely forgotten about the soul. Not even the tastiest piece of sausage – received after hours of standing in line – can replace the profound pain of the soul, elicited by a song’s lyrics.” This was followed by a musical intro from Zhanna Bichevskaya. Indeed, papers in 1918 would shamelessly write of the benefits of fasting when the country was in the grip of starvation. 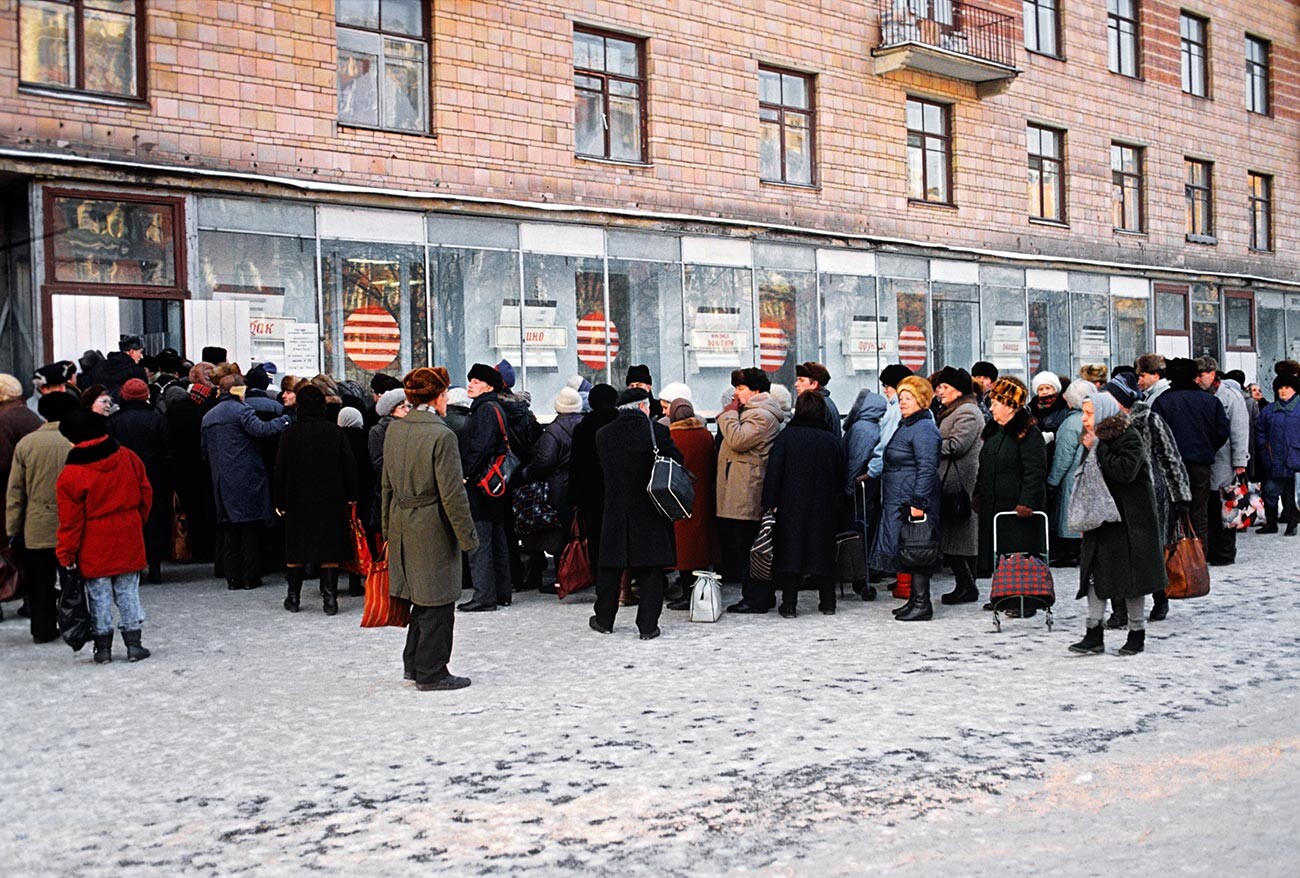 In the runup to the impending and hungry 1992, there is widespread gorging. Groceries are being grabbed wherever possible. I have a feeling that I’ve never eaten like this before. Storing it up. God, forgive us, let us retain even a little bit of our dignity!

Grandma has dropped her interest in politics; when I turn on the TV (in the evening), instead of asking me to turn it up, she says the opposite. Instead of the red flag over the Kremlin there’s now one of three colors. USSR embassies abroad are now Russian embassies. 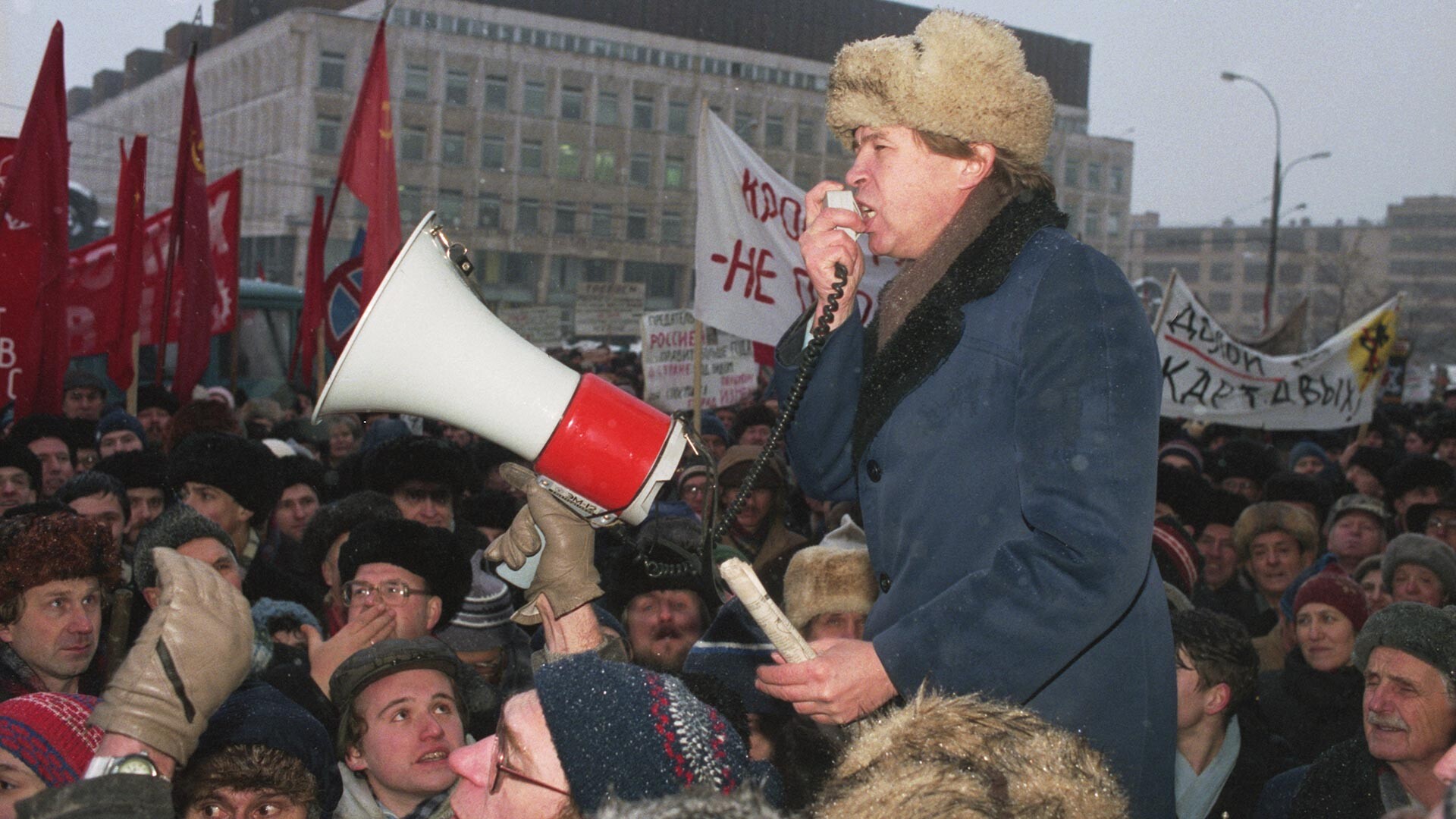 Decorative haste: since early morning, Gorbachev’s office at the Kremlin has been occupied by Yeltsin. Interesting: what circumstances will accompany the end of your rule, Boris Nikolayvich?

On December 25, in the evening, as the evening news show was coming to a close, M. S. Gorbachev came on with a speech, declaring his resignation “out of regard for principal considerations”. I don’t know what there was more of here - drama or farce. Should this really be the fashion in which the first (and I’m guessing now - the last) president of such a country leaves the political arena?

When M. S. began his short announcement, he wanted a drink (with good reason!), but the glass he reached for was empty. 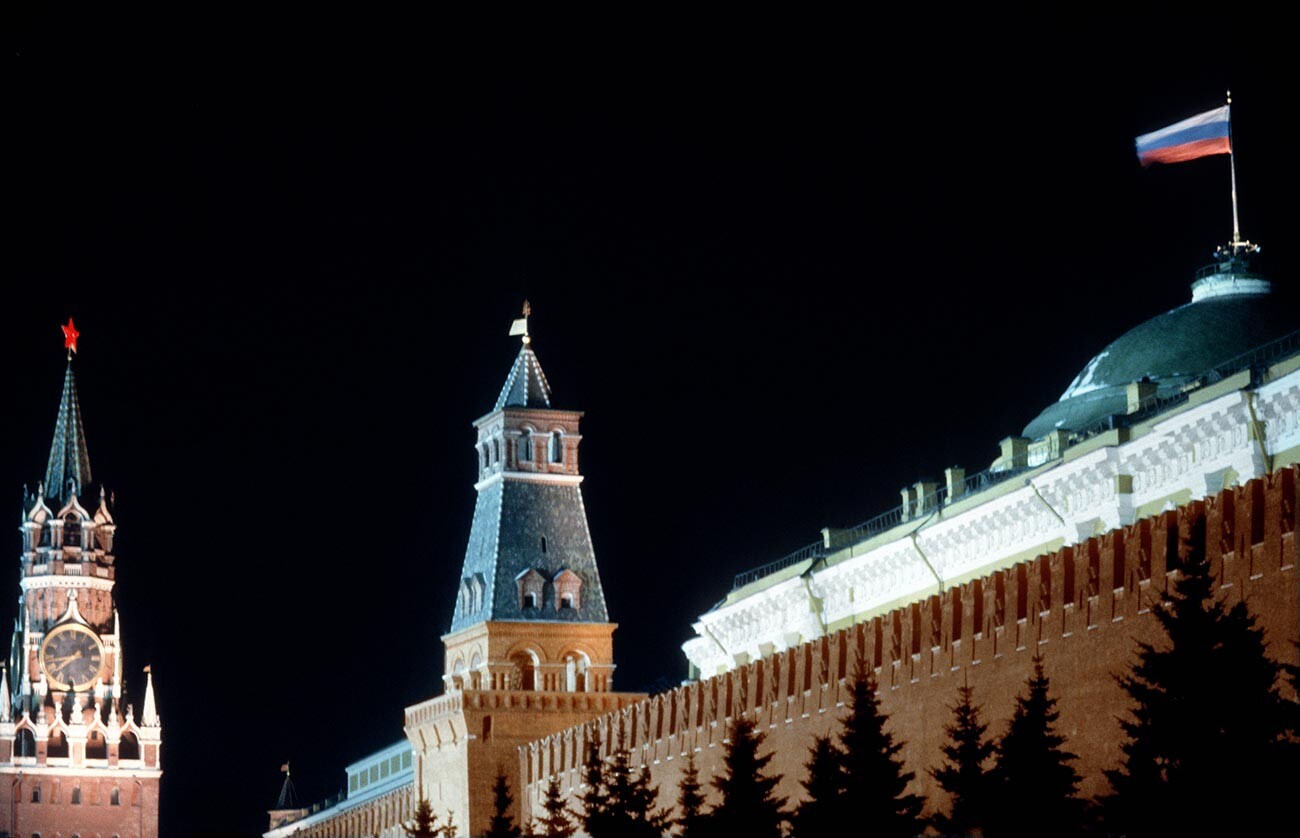 The three-colored Russian flag flying over the Moscow Kremlin

Under the State University in Moscow there’s an underground city that can hold 120,000 people. There are hotels there, stores and everything else you could think of. The Kremlin has a direct underground route to the city. There are enough provisions for 25-30 years. It was intended for the politicians and civil servants in case of war.

On Wednesday the 25th, M. S. decided to appear with a final “address”... Not one newspaper even fully printed the text of the speech! Everyone’s afraid of Yeltsin.

In the morning, he asked to schedule a call with Bush (17:00). And although it’s Christmas over there, Pavel Palazhchenko (ed. - Mikhail Gorbachev’s personal secretary) managed to locate Bush at Camp David… And he agreed. M. S. adopted a borderline non-diplomatic style during the conversation - “the Russian way”... “as buddies do”... Although Bush himself dispensed with diplomacy, heaping a lot of praise [on Gorbachev], much of which ended up in the televised address - about the end of the USSR and about Gorbachev himself and what he meant.

In room No. 41 (by the office), where he would usually read his speeches in front of the cameras, a group of correspondents gathered… But - and this is symptomatic - to our great shame, only Western journalists seemed to give a damn, representing that global importance that Gorbachev was assigned by the rest of the world and which Western society was entirely just in bestowing him with. 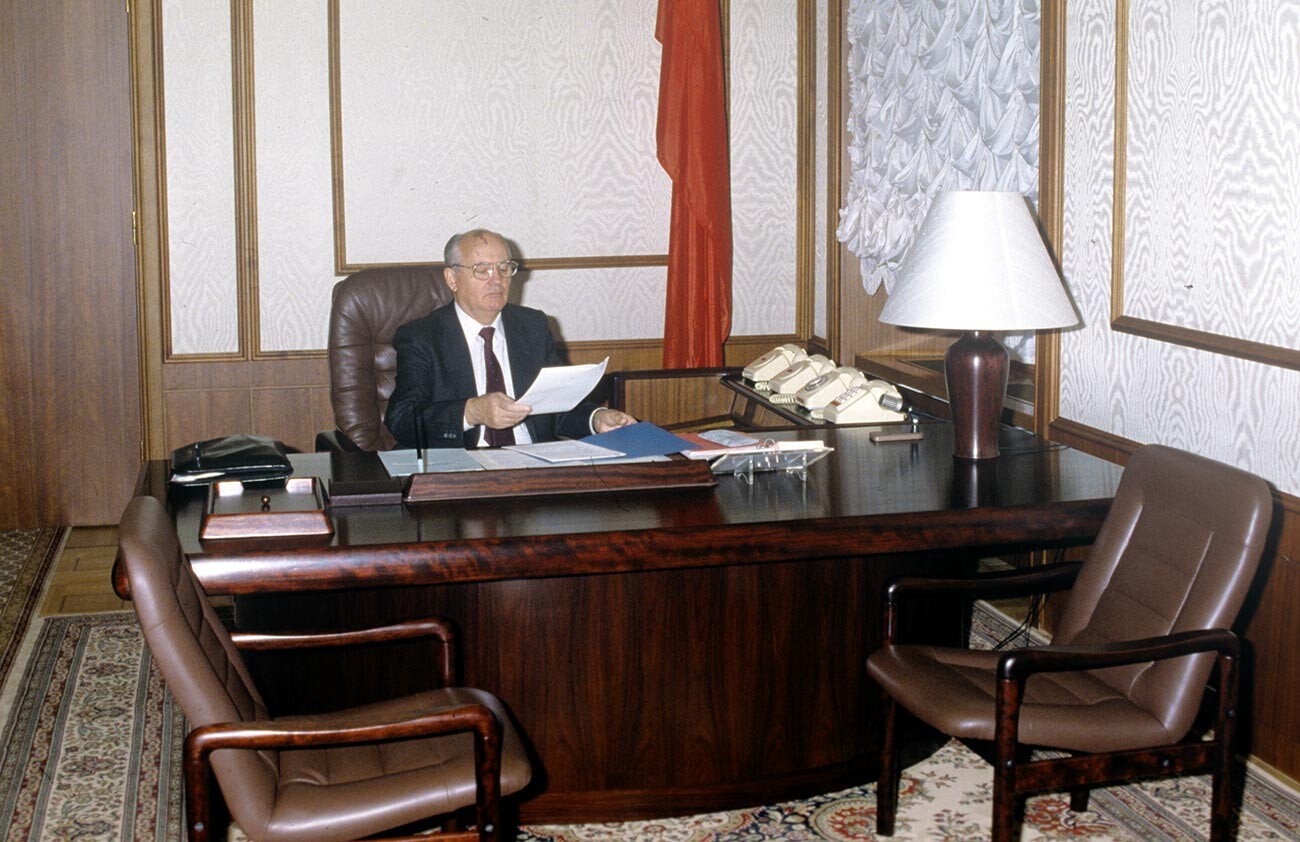 Mikhail Gorbacjev in his Kremlin office

I stood to the side, about 8-10 meters from him. We went live. He was calm. Wasn’t embarrassed to look at the text. And this impromptu sort of fashion worked well. Then, later, doesn’t matter how many phone surveys were carried out, everyone seemed to be in agreement about their assessment: “a picture of dignity and nobility.”

And so it was - “a tragic figure”; although, for me - one who was used to seeing him in the day-to-day, it’s difficult to attach that label to him, the label he would of course be associated with by history…

At 8:15 in the morning (on the following day - ed.), Yeltsin, with his entourage, appeared at Gorbachev’s office. “Well, show it to me!”, he ordered the secretary on duty and entered.

– There was a marble object here on the table... Where is it?

The secretary, trembling, responded: “There was no item… Mikhail Sergeevich never used such pens. We had his markers out on the table for him…” 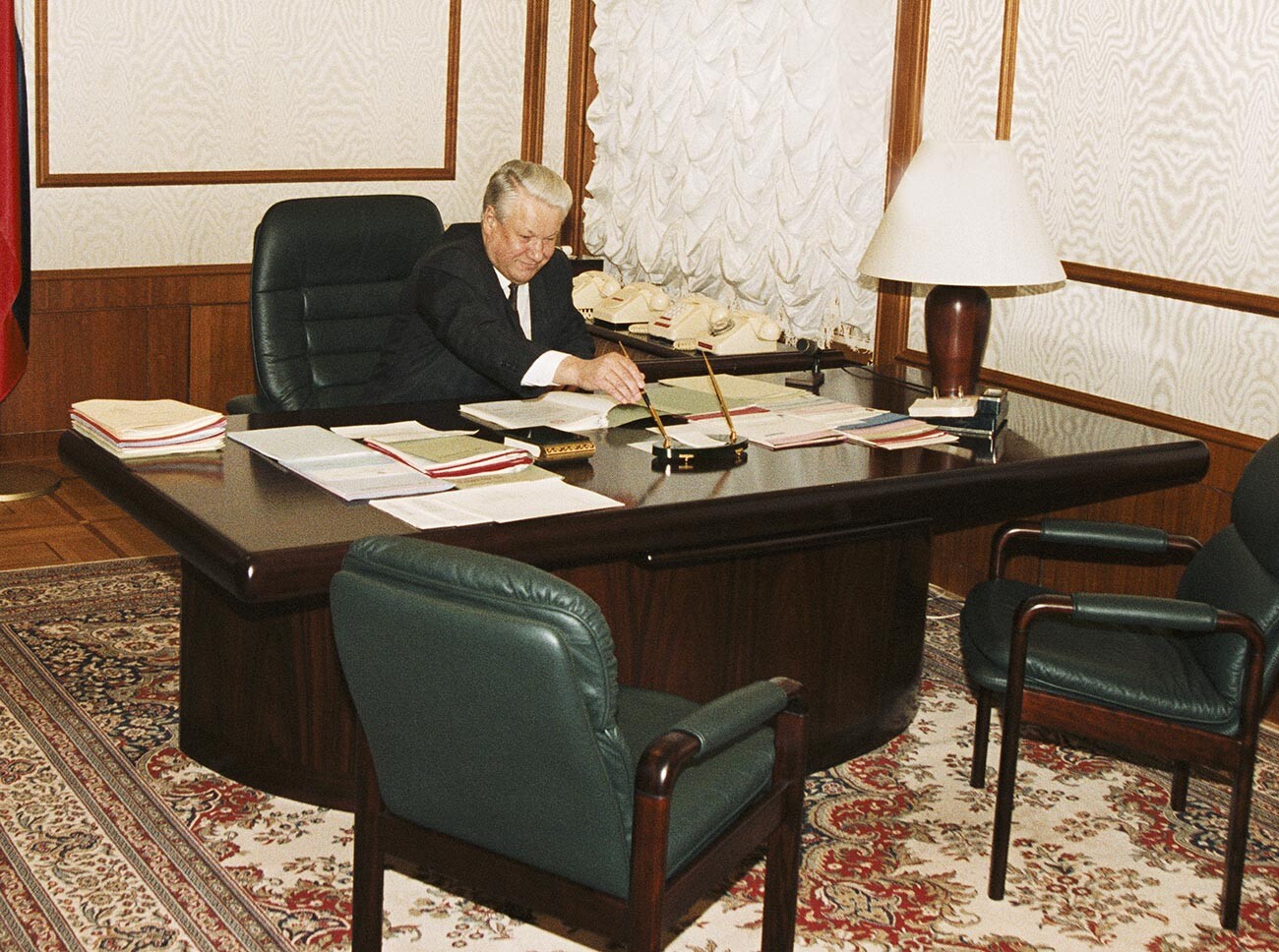 Boris Yeltsin in the Kremlin office

— “Well, OK... And what’s over there?” he said, proceeding to the back room (“the break room”). He began opening all the drawers. One was locked.

Someone quickly came with a key, opened it up — there was nothing inside.

The crowd exited the office, all of them laughing. Yeltsin barked at the secretary before leaving: “Watch it, you! I’ll be back later today!”

I left for home in the morning. There was a huge line for bread in the street - it stretched around the house! After lunch, there was none left at all. And yesterday, as well, there was no bread left in a number of districts. Yeah, we’re “really living the life today, and will have an even better one tomorrow.” It’s good to be home! Had my fill of noodles with fried onions. Read another detective novel, watched a news show.

All diary entries are made available by prozhito.org.