Why was Yury Gagarin’s spacesuit kept from being photographed after landing? (PHOTOS) 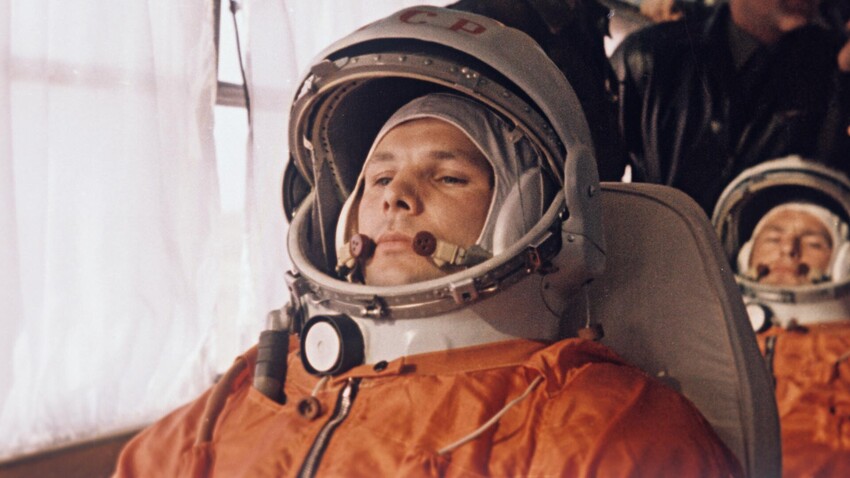 Sputnik
Photos taken straight after Yury Gagarin’s return back to Earth show him wearing an ordinary warm jacket, instead of his spacesuit. It’s not like he went up there dressed like that though, did he? So, what gives?

In the presence of members of the state commision after his legendary successful space flight, Yury Gagarin - the first man in space - did not forget to mention one very important detail: “I took a few extatic photos up there. I had taken the outer shell off by then. I’d only had the blue thermal wear on - no pictures were taken with the orange and gray layers and helmet. The spacesuit was [tucked away].”

And so it was - in every photo after landing, the cosmonaut is shown wearing a warm jacket similar to an ordinary Soviet vatnik (warm clothes, worn by prisoners in Soviet labor camps). In actuality, this was a V-3 heat-shielding costume worn by Gagarin under his spacesuit. There was no suit in sight, however.

But why would he need to hide it?

Let him fly without the suit!

The battle that waged around whether the first man in space was going to have a spacesuit at all was fierce. What was he to wear on such a perilous journey?

It will sound silly today, but some of the specialists seriously considered sending Yuru Gagarin into space in the heat-shielding costume - and nothing else. It would’ve protected him in the event of a water landing, or against the cold; but it would have been useless in the event of the spacecraft decompressing in space. However, the ‘Vostok’s designers realized in February of 1960 that they were having serious issues with the overall mass and it was imperative that they reduce it somehow - by removing as much equipment as possible. However, many were optimistic that there was little chance of the spacecraft decompressing, so the spacesuit would only have added unnecessary weight.

The debate over whether the cosmonaut needed the suit at all lasted until summer, until, finally, the “father of spaceflight”, Sergey Korolev, issued the final word. He said that he was “willing to sacrifice 500 kilograms” [at the expense of the ship’s padding and equipment], if it meant that the spacesuit with its life-support systems would be ready by the end of the year.”

With just eight months left on the clock before the flight, work was underway to create the first spacesuit in history - the ‘SK-1’.

The engineers opted to take the shortest path, using the ‘Vorkuta’ Su-9 fighter pilot suit as the basis - where life support and oxygen supply systems were also critical components.

The SK-1 was a “soft” spacesuit, consisting of two layers of materials. The first was comprised of lavsan and polyethylene terephthalate - a type of thermoplastic: it had been the newest type of material at the time, developed by the Academy of Sciences relatively recently, in 1949. The lavsan was used for reinforcement (today the material is used in the creation of plastic bottles!). 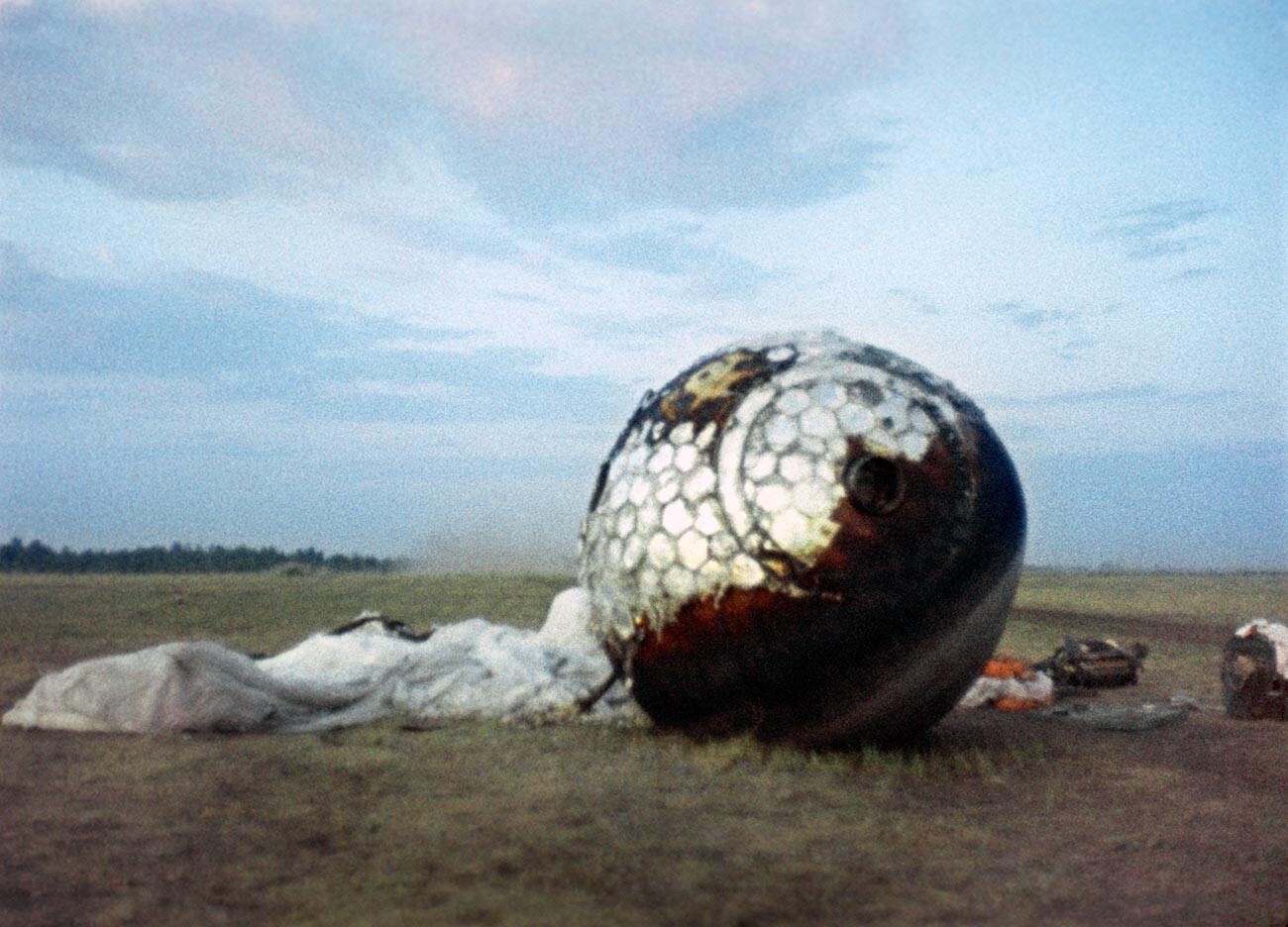 The second hermetically sealed layer was made of rubber. Its outer layer, visible to all, was an orange waterproof casing. The orange was used to make any rescue attempts easier, in the event of the cosmonaut having to eject from the cabin and perform a parachute landing.

The helmet was immovable, with pressure sensors attached. In the event of decompression, it would automatically shut, while the hose used for conditioning the inside of the suit with air from inside the spaceship would automatically disconnect. In that event, air supply would be carried out via the attached oxygen tank. Of course, going on a spacewalk in such a suit would have been strictly impossible, but the cosmonaut could last a total of five hours inside the cabin, without support from the ship’s systems. By the way, even this primitive spacesuit already had its own waste-disposal system, enabling the cosmonauts to do their business without removing the suit. 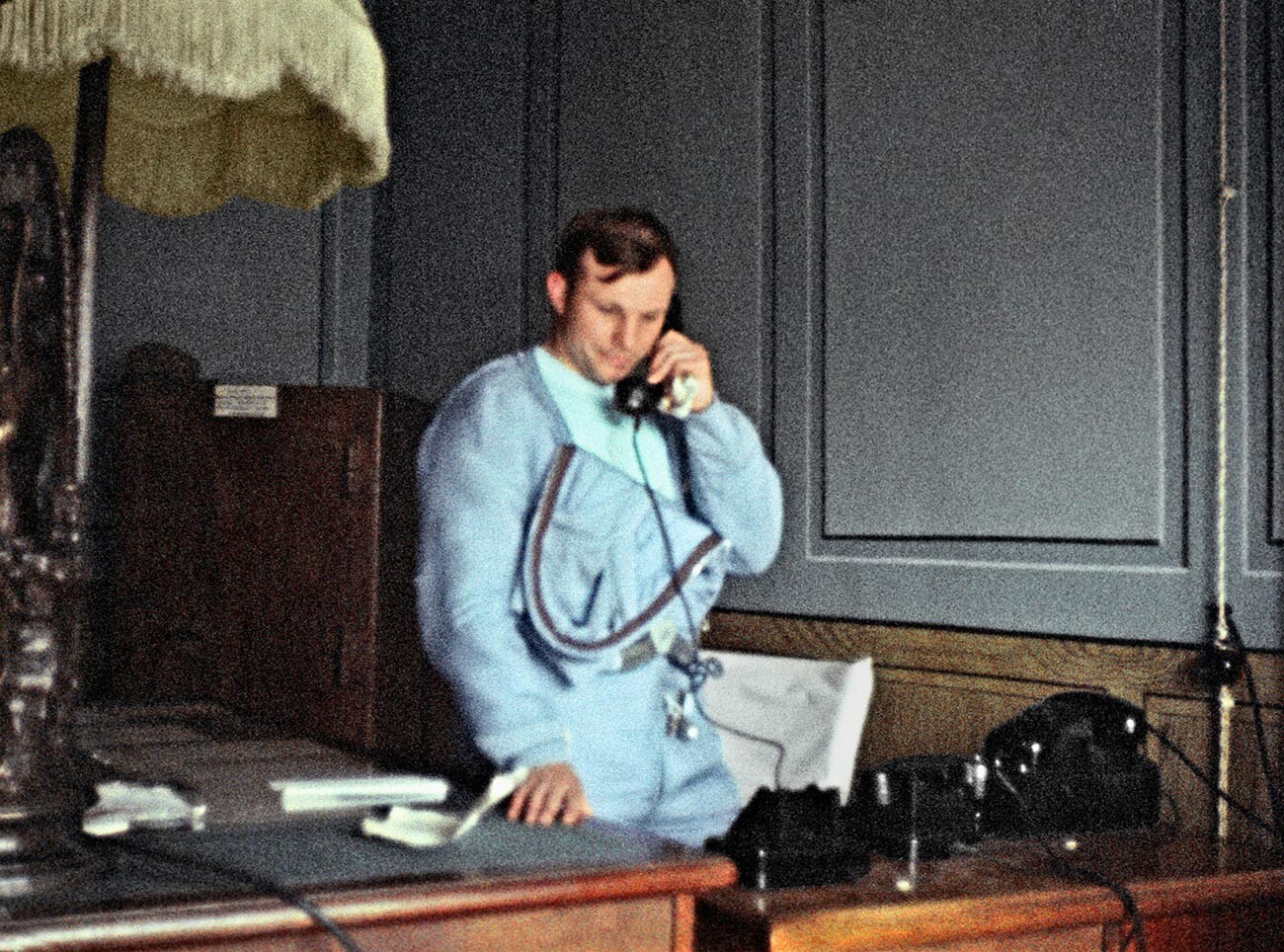 The SK-1 was strictly tailored to the measurements of the first squad of cosmonauts and weighed 20 kg, together with the helmet. It was impossible to put it on without assistance. There were specific instructions regulating the order in which the legs, arms and other steps were to be carried out. It was, however, possible to take it off without assistance.

Gagarin wore several layers of clothing: a basic layer, followed by thermal shielding, a layer of lavsan, followed by the rubber and, finally - the orange casing. But what was the reason for the strict regulations on hiding these things from the camera’s eye?

A man on a secret mission

As you might have guessed, the answer is simple: secrecy. The spacesuit had every right to be considered an ingenious Soviet invention; the materials and construction, at the height of the Space Race with the Americans, had been a state secret. The orange outer casing was, among other things, designed to hide the layers underneath from the public eye. 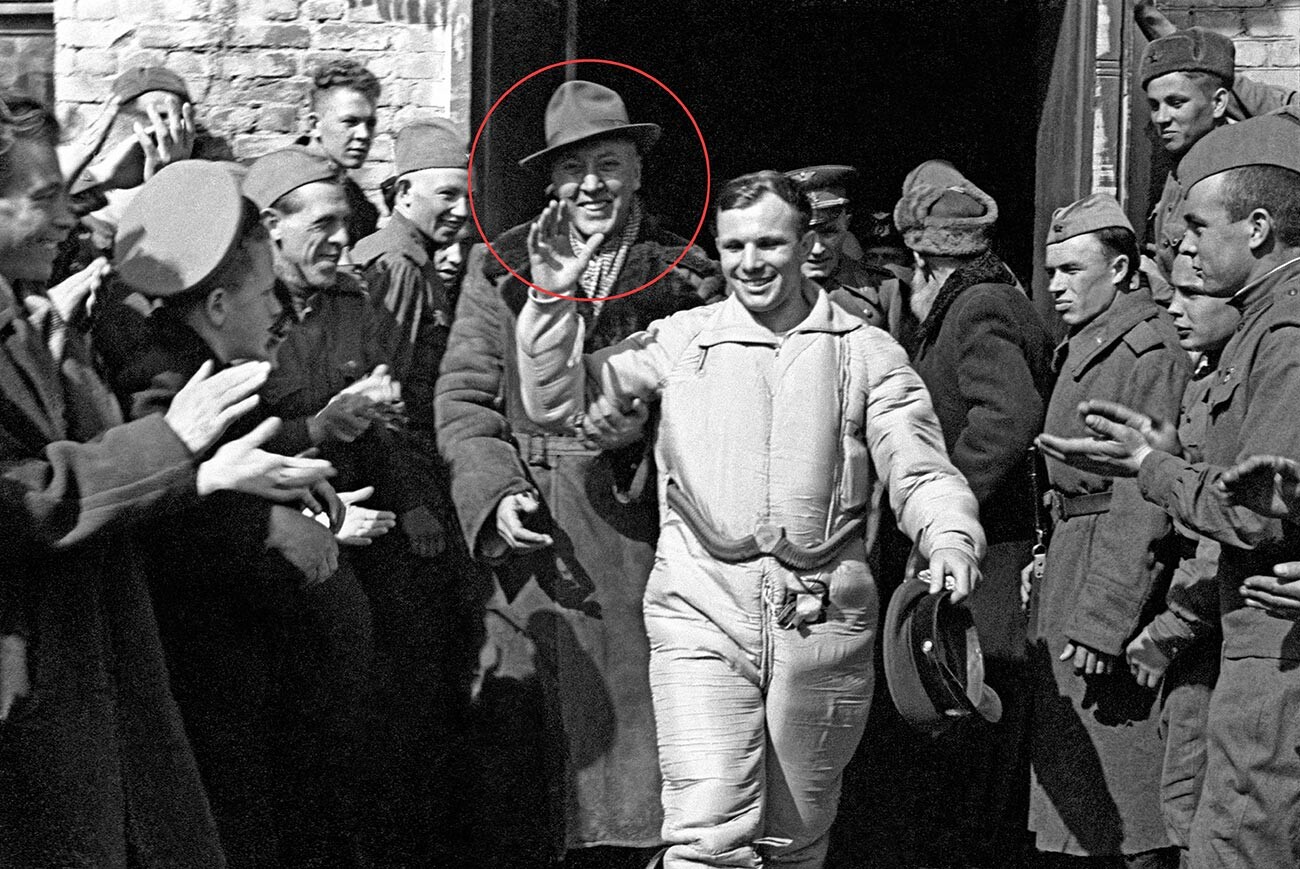 Yury Gagarin was under strict orders to take every possible step to get rid of the spacesuit by either hiding or outright destroying it, wherever the landing may occur. In order to ensure that this took place, one of the suit’s designers, Ota Bakhramov, was sent to assist. On April 12, 1961, the secret mission that only a small number of people were privy to was carried out. 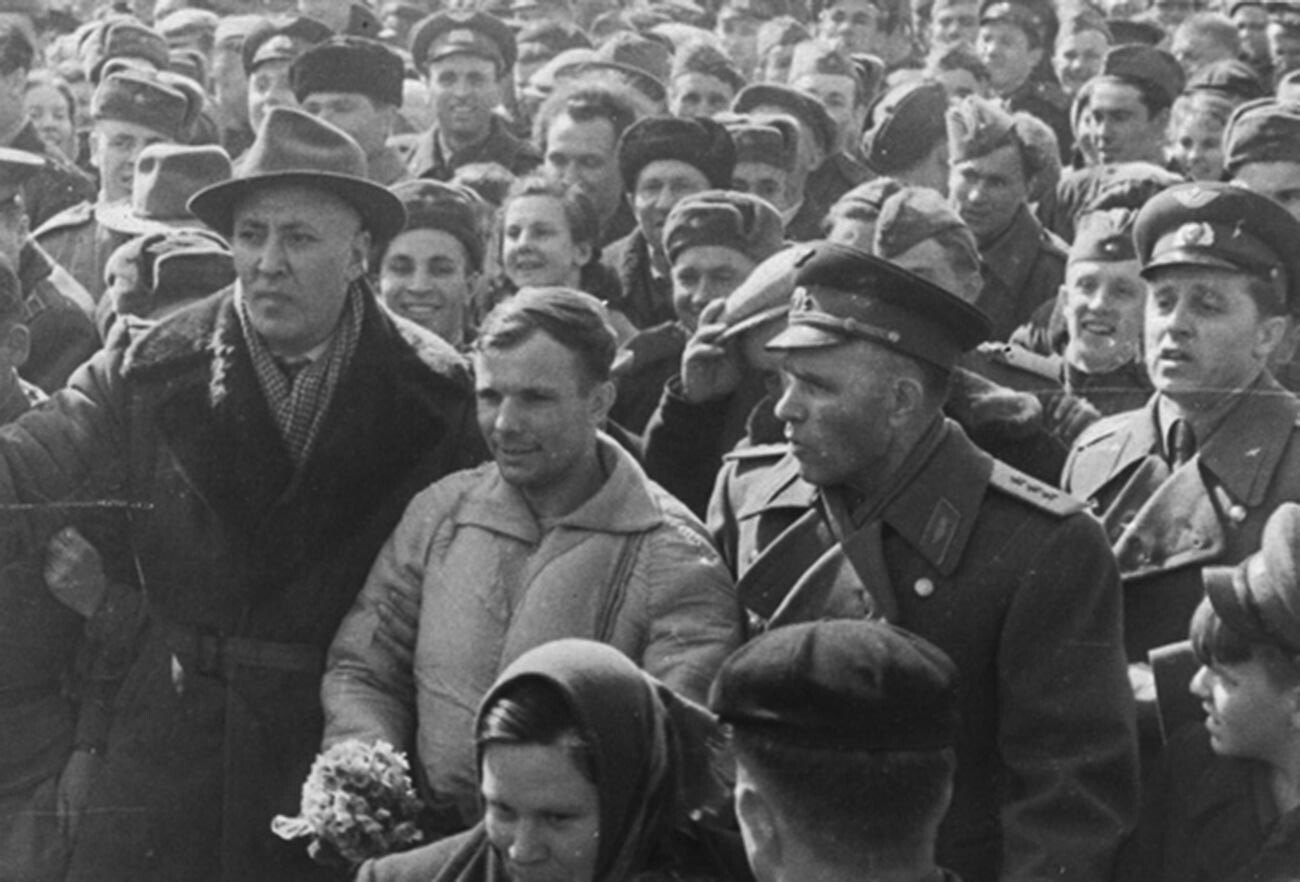 Bakhramov was to take the suit from Gagarin or the leader of the search and rescue team at the point of landing. That day, the engineer still managed to end up in several amateur photos, while carrying out the secret mission. The hulk of a man in a fedora hat and winter coat was assumed by the residents of the town of Engels to be a security officer or the cosmonaut’s bodyguard, tasked with guarding the national hero’s safety. But the truth was far more prosaic: Bakhramov was simply there to pick up the suit.